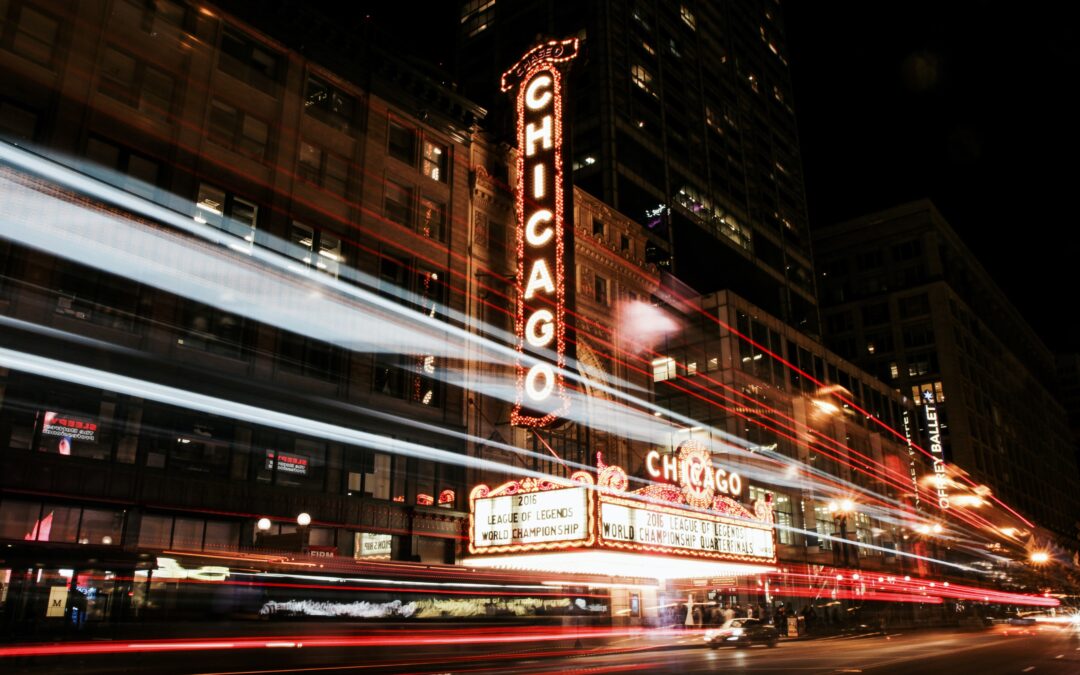 After months of steeling ourselves against sub-zero temperatures, battling unforgiving winds and the chills they bring, trudging through snowdrifts that come up to our butts, we use summer in Chicago to its full advantage.  Because, let's be honest - we've earned every last ray of sunshine Mother Nature is gracious enough to finally bestow on us.

People are out and about. Patios are open and bubbling with friendly conversation.  The Lake Michigan beaches are crowded with sunbathers, paddle boarders, and ice cream vendors. And up by Wrigley Field, you can hear the collective chorus of cheers, chants, and disappointed groans depending on how our beloved Cubbies happen to be faring in the day's game.

If ever there was a time to do a Chicago family trip, summer is definitely it.  And while this summer might look a little different than summers past, you can be assured that the spirit of the city will be as vibrant as ever. Especially because people have been cooped up so long!

So, when you're ready to travel after quarantine, here's a list of all of our favorite family-friendly things to see and do in the Windy City, this summer or whenever you feel ready to start exploring again.

See all the great Chicago architecture from a new vantage point - the river!
Photo by Cody Board

This is hands down our family's favorite "touristy" thing to do in Chicago on a nice summer (or even crisp fall) day.  We've been on architecture boat tours many times with various friends and family members, but the tours never get old.  There are several options to choose from, but our favorite is the official Chicago Architecture Foundation Center River Cruise.

See some of Chicago's famed architecture and hear the legends of centuries past (including that famous one about Mrs. O'Leary's cow and a little fire she started) while gliding down the Chicago River on Chicago's First Lady.  The stories and all the great sightseeing are sure to keep even the littlest travelers entertained.  The views of the city are hard to beat plus almost every kid loves being in a boat!

Visit the mob's old haunts on the Chicago Crime Tour

Chicago's seedy and sordid history is no secret.  The city's streets were once the playground for some of the world's most notorious criminals, like Al Capone, John Dillinger, and H.H. Holmes.  Stakeout their old haunts and bear witness to the infamous crime scenes of history, all from the climate-controlled luxury of a giant tour bus (Chicago summers can get hot, friends).  We recommend Chicago Crime Tours - they're funny and knowledgeable and incorporate a mix of touring on the bus and walking around a bit.

Be advised that there is some minor profanity, and if you know anything at all about Al Capone, then it probably goes without saying that the subject matter likely won't be suitable for younger ears.

Dig into science at the Museum of Science and Industry

It might sound like a bit of a snoozer, but I promise the Museum of Science and Industry is a hands-on, interactive experience the whole family will enjoy.  With exhibits like Swiss Jolly Ball that showcases the world's largest pinball machine and VR Spacewalk that allows you to experience what it's like to float outside the space station, the whole point of the museum is to make science fun.  (I know, I thought it was impossible too.)

The Baby Chick Hatchery exhibit is also not to be missed, your kids will love it and you'll get some great Insta shots!

Take a walk around the Lincoln Park Zoo

I'll be upfront and say it - I'm not a zoo person.  I tend to view zoos the way I view Tom Cruise movies - if you've seen one, you've seen them all.  And honestly, watching two Bonobos scream at each other over a toy rope is not all that different from what I get to see at home on a daily basis - just swap out the rope for a tablet.

But the Lincoln Park Zoo is different and one that everyone in my family (myself included) loves going to.  The first key difference is that it's small.  No wandering around for an hour before realizing you have yet to leave the South America exhibit.  You can probably see this entire zoo in less than two hours - and that's with a bathroom break, a stop for cotton candy, and a ten-minute interlude to watch the gorillas.  It's also very clean and well-maintained.  And the best part is it's smack dab in the middle of a city, which makes it a very surreal and unique zoo-going experience, especially for kids.

Oh, and did I mention admission is completely free?

Pop in to see the penguins at Shedd Aquarium

These penguins visited the Shedd Aquarium while it was closed during quarantine and they thought it was pretty cool.

But if you think their opinion seems a bit fishy, I'll tell you that my family absolutely loves the Shedd Aquarium.  The aquarium is home to tons of unique marine and wildlife from all over the world and features beautiful aquariums showcasing tons of unique and exotic fish.  The shark and dolphin exhibits are popular favorites in our family, as are the stingrays and sea otters.  And as an added bonus, the Shedd's location just south of the city lends itself to some pretty incredible skyline views, so have your phone ready!

Visit Sue at the Field Museum 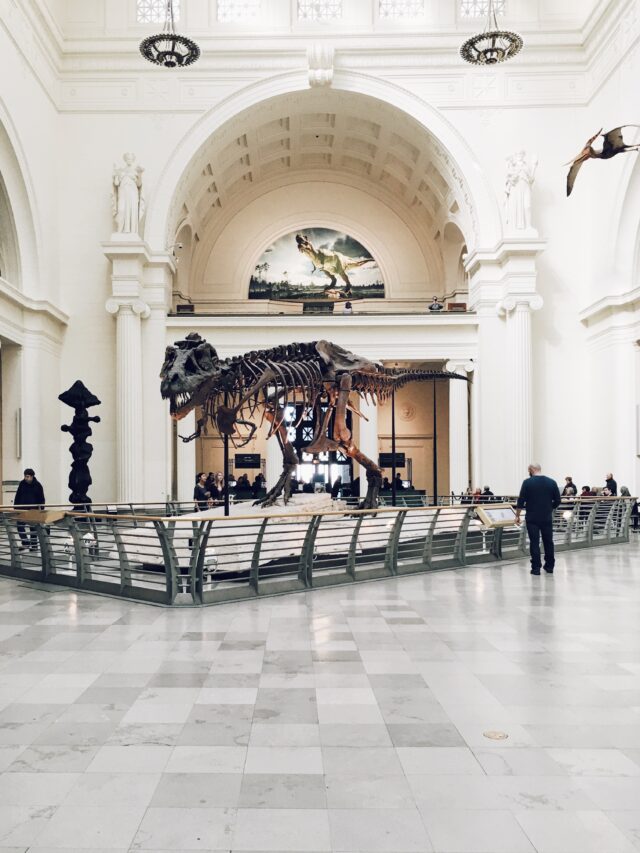 Who is Sue, you ask?  Just a famous 40 foot long T Rex skeleton at Chicago's Field Museum. She's the largest T-Rex skeleton ever found, and at around 90% complete, she's also the most intact.  And absolutely insane to see in person.

Once you're done ogling Sue, you can decode some hieroglyphics in the Ancient Egypt exhibit, learn about Chicago's storied history of brewing beer, or take a nature walk through the Wilderness exhibit.

The Art Institute of Chicago is a personal favorite, though it's admittedly less exciting than some of the other items on this list.  But if you have kids who like (or tolerate) art, this is definitely a must-visit.  When I first moved to Chicago, I was shocked at how many famous works of art were housed in the Institute, like A Sunday Afternoon on the Island of La Grande Jatte by George Seurat, Nighthawks by Edward Hopper, and Vincent Van Gogh's 1887 Self-Portrait.  All of them are even more impressive in person.

The museum is huge and easy to get lost in, so plan ahead to make sure you have a chance to see all the classics. 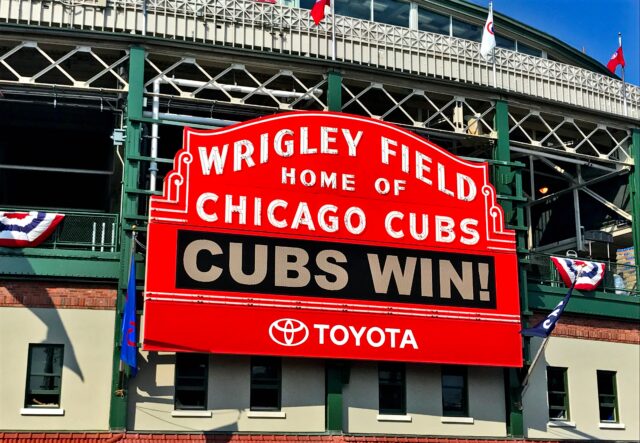 A baseball mecca for sports fans everywhere, Wrigley Field is cool to see even if you don't like baseball.  Though the surrounding Wrigleyville neighborhood has gone through a massive renovation in recent years, the historic baseball field with its ivy-covered brick walls and old school manual scoreboard have been left unchanged.  Games can book out months in advance, so plan ahead and pop on over to SeatGeek or StubHub if you want to secure good tickets for a decent price.

Game or no game, the ballpark is still fun to see and the neighborhood has plenty of great restaurants for some local fare and people watching, including Smoke Daddy BBQ, Big Star Tacos, and Wrigleyville Dogs, serving up some of Chicago's finest.

Do a Kayak Tour on the River

For families with older kids who love a little adventure, kayak tours on the Chicago River are always a great time, weather permitting.  You kayak with a group and have a tour guide, so don't worry, you're not left to navigate the river on your own.  We've done a couple with Wateriders and they're always a blast. Like the architecture tour, the guides will stop the group every so often at points along the river and share interesting facts about the city.  And while both single and double kayaks are offered, I've learned over the years that nothing causes marital disputes quite like the ones you have while trying to co-navigate a double kayak.

Don't say I didn't warn you.

Go to the top of Willis Tower

If you've ever wondered what it's like to stand more than a thousand feet in the air and look straight down at the world below you, then the Skydeck at the top of Willis (formerly known as Sears) Tower is the thrill for you.  At the very top, large plexiglass boxes extend out of the building and over the city, giving the illusion that you are standing suspended over the streets below.

While I'm personally not a fan of heights, the experience always gets rave reviews from friends and family who brave the top.

Get Your Picture Taken by the Bean 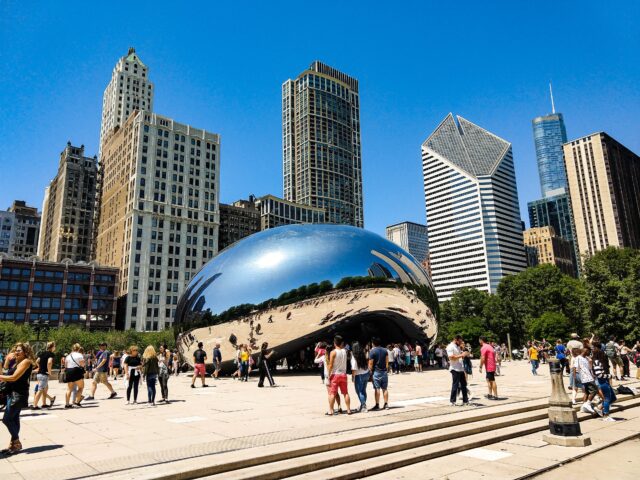 It's literally just a giant steel bean, but somehow it's still fun!
Photo by Conner Freeman on Unsplash

We saved the most obvious one for last.  Because have you even been to Chicago if you return home without a selfie in front of the Bean?

You might wonder what's so great about getting your family picture taken in front of a giant metal sculpture shaped like a legume that has a tendency to make you bloat, but we swear it's fun and worth the walk!

Because have you even been to Chicago if you return home without a selfie in front of the Bean?

Flights from LA to Chicago are just over 4 hours and are offered by all major airlines.  When flying into Chicago, you can fly into either Midway International Airport or O'Hare International Airport.  Neither option is better than the other - they're both relatively equidistant to the city center and both have El lines that operate regularly between the airport and downtown.

For places to stay, Chicago has tons of options to meet a variety of preferences and budgets.  For the family looking for something in the heart of the tourist district, The Ivy Hotel is a great option.  Just off of Michigan Avenue and close to Navy Pier, it's the perfect location for those looking to see a lot in a short amount of time.  But for those interested in having a more relaxed and local experience, check out the Hotel Lincoln.  Located in Chicago's Lincoln Park neighborhood, just a stones throw from the zoo, Hotel Lincoln gives you city vibes with neighborhood feel.  For a truly unique hotel stay in Chicago, we recommend the Chicago Athletic Association Hotel, a gorgeous hotel converted from the historical Chicago Athletic Association just across from Millennium Park.

If you're looking for a fun city getaway that the whole family will enjoy this summer and beyond, Chicago's got you covered!