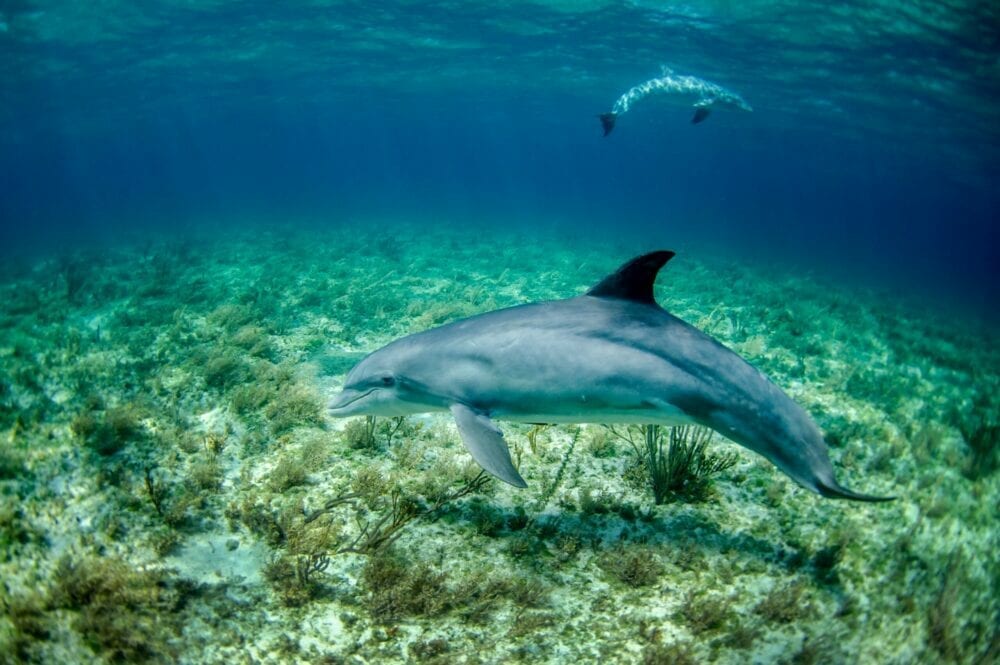 It’s not something I thought could happen so close to the urban sprawl of Los Angeles.

Yet, here we were, looking through a rainbow of ocean mist as dolphins below escorted our ferry to our cave kayaking adventure in the Channel Islands. Their long bodies effortlessly slicing through the water, occasionally rocketing into the air for a flip. We accompanied their progress with a soundtrack of oooos and aaaahs. Tired little faces opened in wonder, slowly waking from their 6am departure, to a private, sea life show. 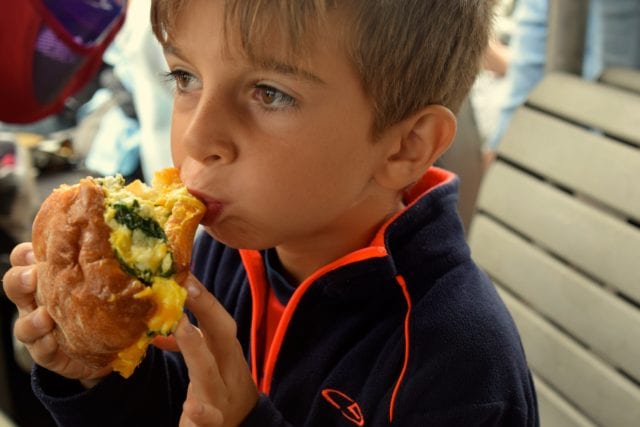 NO TIME TO ENJOY THIS ARTICLE NOW? PIN OR BOOKMARK FOR LATER! 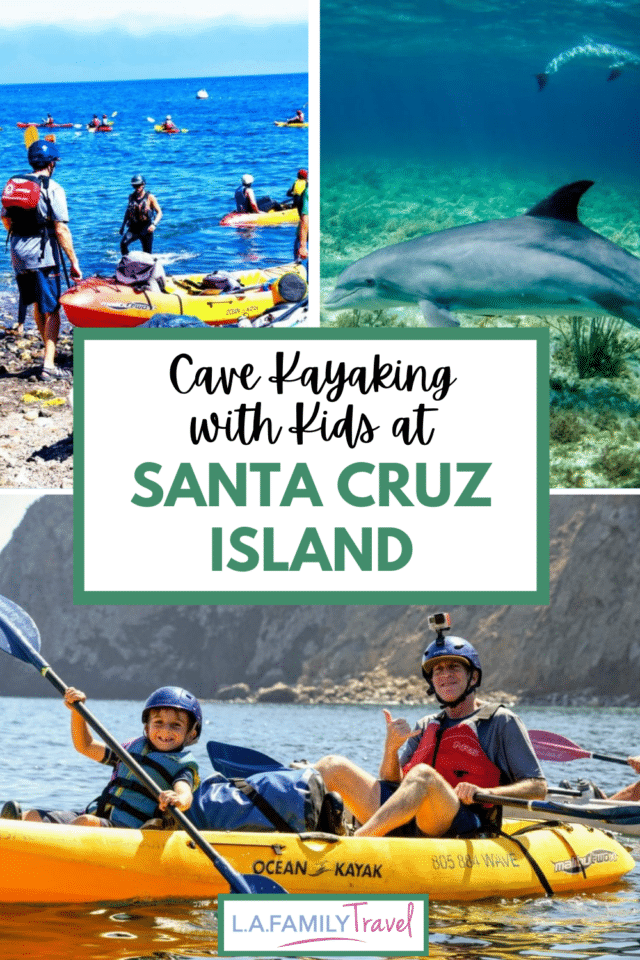 Two hours later, the crew from Island Packers pulled close to the wharf at Scorpion Ranch, on California’s largest island, Santa Cruz. We had already witnessed the migration of minke whales, the barking of sunning sea lions and the playful antics of various dolphin pods. The day felt magnificent and the sun had only just appeared.

Historians estimate the 96 square miles of Santa Cruz Island, named “La Isla de Santa Cruz,” or the Island of the Sacred Cross, after an honest Chumash Indian returned a valuable cross forgotten by visiting missionaries, has had a human population inhabiting it for 10,000 years. It was the Chumash Indians who first settled the patch of green set in the middle of the Pacific Ocean. Ice bridges, formed during the Ice Age, are credited with having brought them to the island from the Alaskan region, our naturalist guide from the Santa Barbara Adventure Company, Aaron Kreisberg told us. 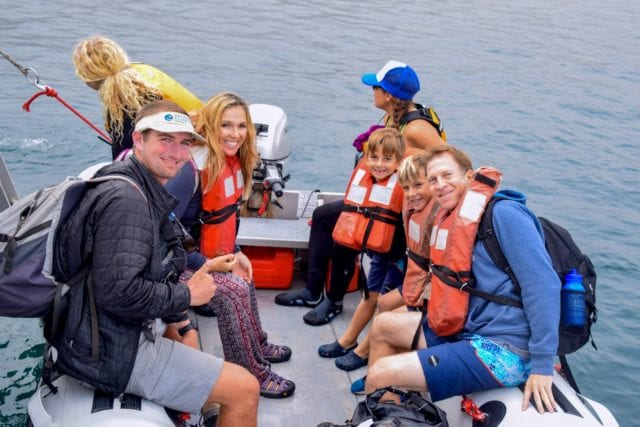 Aaron, front left, fills us in on our ride to Santa Cruz Island

Scorpion Ranch, today’s landing spot for those wishing to camp, hike, or explore the water around the island, was once a thriving sheep farm and later cattle. The introduction of these and other non-native animals led to overgrazing, which left the island exposed to ocean waters during a 1997 storm that washed much of the man-made structures and animals out to sea. After this, the descendants of the original owners gifted the island to be split between the Nature Conservancy and the National Park Service who have worked to restore the island to its natural state. 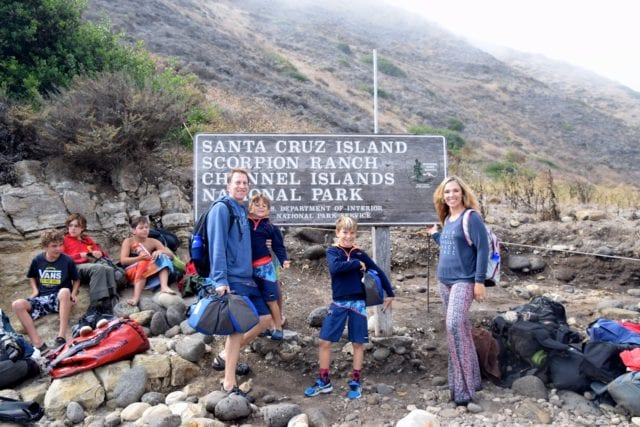 This day, we planned to explore the caves located in Scorpion Anchorage around Santa Cruz Island, part of the Channel Islands, and part of Ventura County. As we stepped into the dinghy that carried us from our ferry to the wild grass and molten rock hills of the island, we could see packs of visitors separating into groups to kayak the Channel Islands or explore in other ways. Some strapped on scuba or snorkeling gear, some set out on hikes. 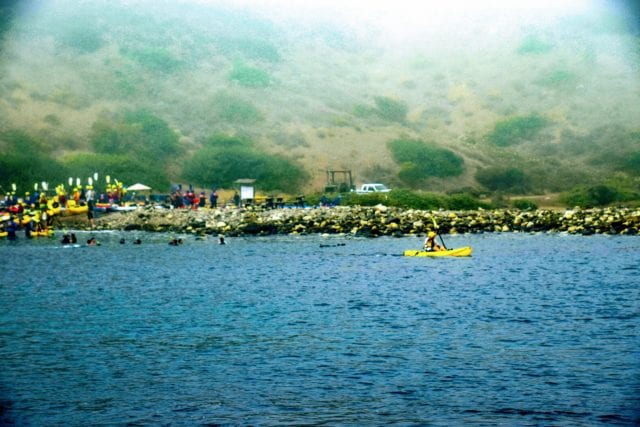 There are endemic animals to spot on the island, like the island Scrub Jay and the Island Fox, the world’s smallest fox, which was just removed from the endangered species list thanks to the Nature Conservancy. We followed our group to a line of kayaks that would take us to explore the various sea caves around the island. 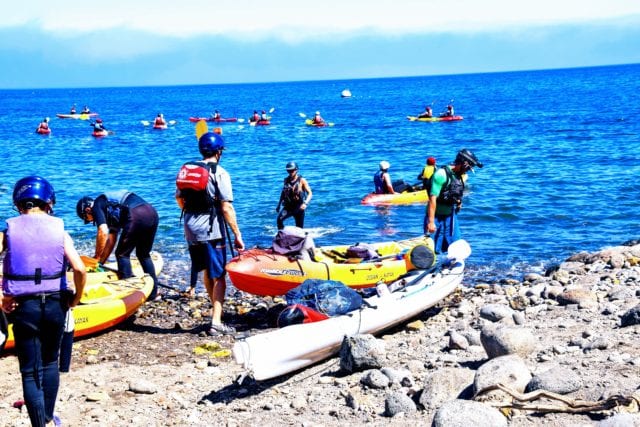 We packed our cameras and lunches into the provided dry bags and pushed off into the ocean with each double kayak carrying one parent and one child. 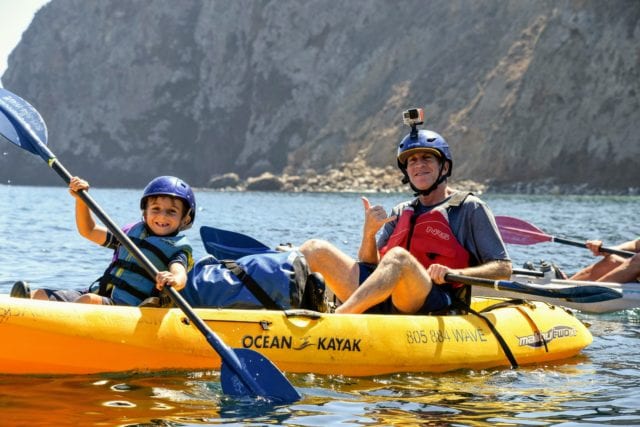 Knox and Daddy teamed up

Kreisberg led us into the mouths of jagged rocks large enough, at times, to comfortably navigate without touching the walls. On occasion, he warned, the path would be tight and offered techniques to squeeze safely through, making the challenges optional, but ones we couldn’t resist accepting. 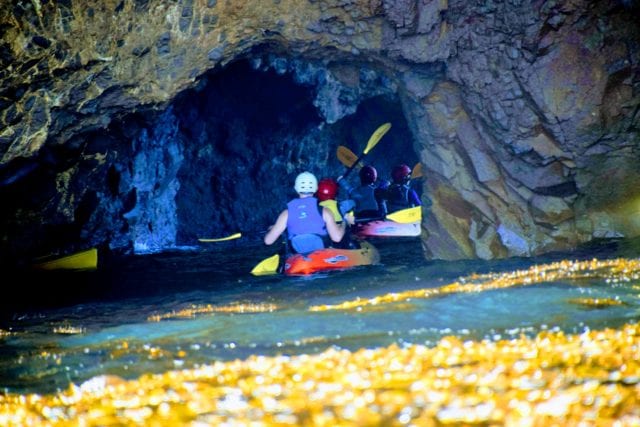 Each cave was unique. One was an expansive auditorium of bellows hurled by largely inert sea lions, bouncing through the shadows of red and green algae-hued walls. One was a windy snake hole, whose crossing had to be timed with the rise and fall of the tide. “Go, go, go, go go!” Kreisberg urged as I paddled as quickly as my inexperienced oars could push, always the fate of my child who was sitting in front of me, foremost in my mind. How would it be if we were crushed against the sharp rocks or spilled into the cold water? I tried not to wonder. 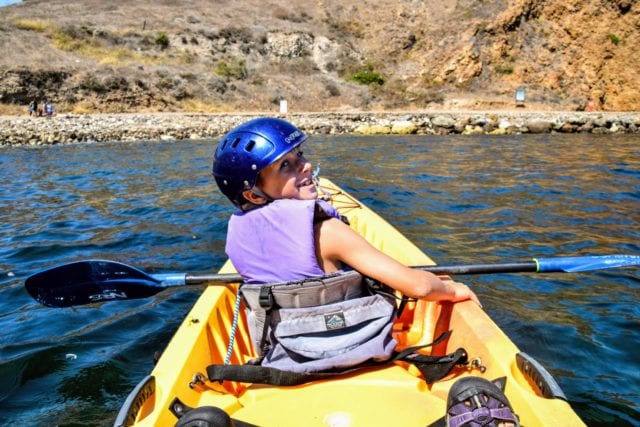 Finally, it was lunchtime and in between a half-ring of rising cliffs, Kreisberg found a patch of sand and stones that served as stools for our afternoon meal. Channel Island Provisioners provided our breakfast, lunch and snacks. This not only saved on time and the hassle of preparing food ourselves (meaning mommy) but also allowed us to indulge in delicious, healthy combinations that felt decadent in our rustic surroundings. 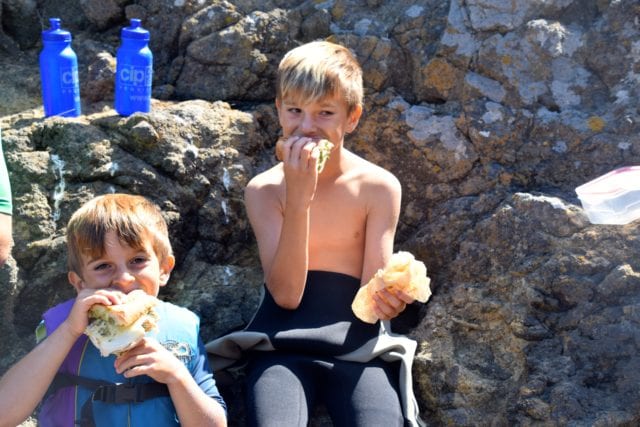 Kreisberg offered the chance to snorkel in front of our lunch spot around an enormous rock jutting from the ocean. The boys tried…. 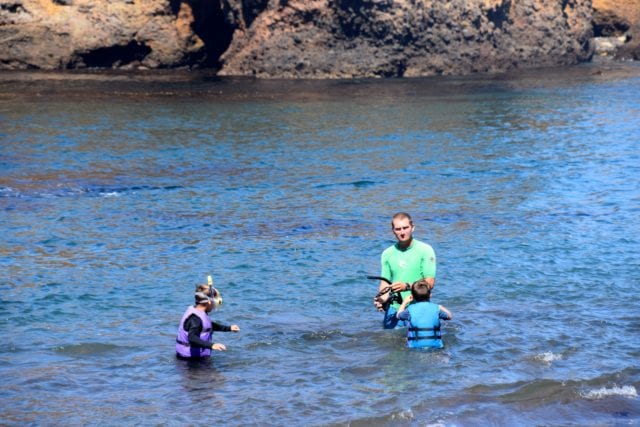 …and then chose to pass and slyly tried to climb the surrounding cliffs.

Mom and dad braved the cold waters to be rewarded by the sight of a spectrum of fish and stingrays, swimming between ropes of algae. Kreisberg instructed us on how to use the algae to resist the moving tide. I used my fins to kick around that rock as fast as I could, wishing I had chosen to wear the proffered long wetsuit, instead of the sleeveless one. 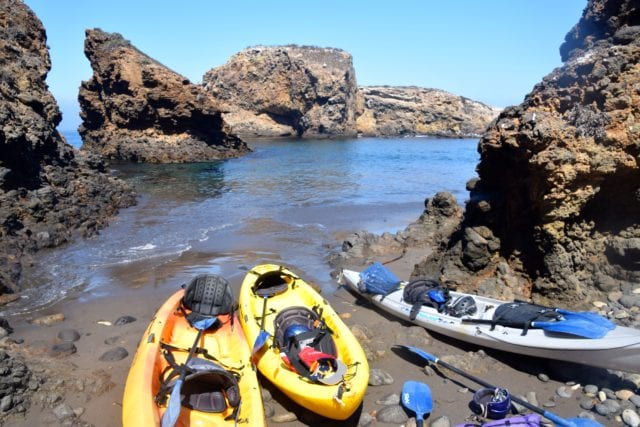 Don’t Miss! A Walk In the Redwoods: Things to Do Around Santa Cruz Redwoods RV Resort

Before we left the island, we took a few minutes to explore the structures and the skeletal remains of machinery left behind at Scorpion Ranch and preserved by the National Park Service.

A review of cave kayaking with kids in Channel Islands. A guide from the Santa Barbara Adventure Company leads the family trip. 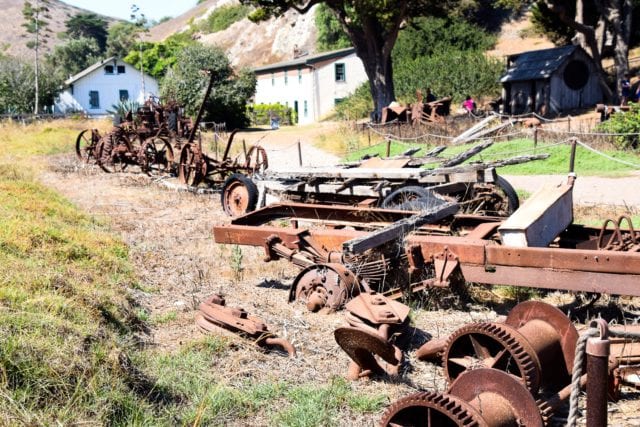 Inside the homes, recreated living spaces and recorded messages around the ancient appliances and tools explained to the curious what life looked like back then. I wished we had more time to dig in. 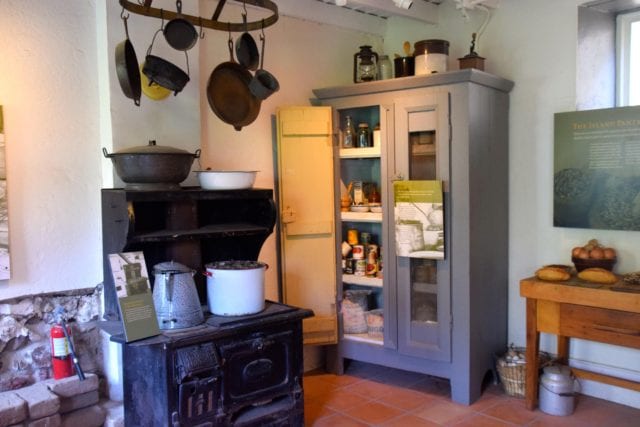 On our journey back to the mainland, we huddled inside the cabin, seeking warmth, exhausted by our discoveries and challenges, enjoying the hot snacks and beverages. It was a day-long commitment to the exploration of a world that felt thousands of light-years away yet was only hours from home and added another layer to our family history. 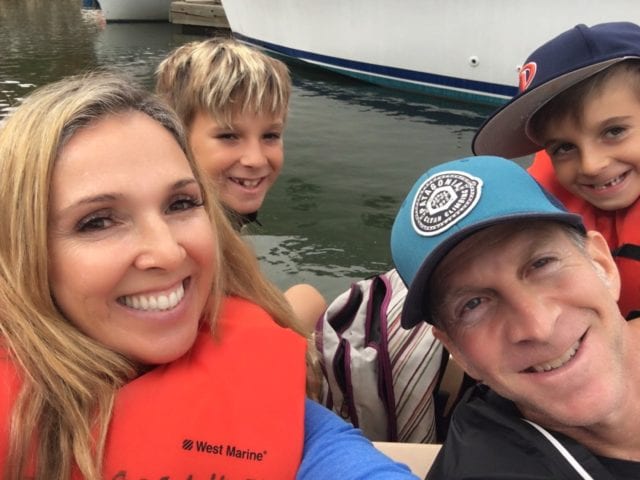 FOR A WEEKEND GETAWAY: Start with the ideas in this article published in GoNomad then finish with the ones above.

Voyages with Island Packers could be found at https://islandpackers.com While there, adventures could be secured through Santa Barbara Adventure Co. https://www.sbadventureco.com and amazing, affordable meals and catering options could be delivered dockside by chef and sailor Neal Rosenthal from Channel Island Provisioners https://cip.bz

Although we were hosted by these kind companies, there are no affiliate links in this article. We just really dig these companies! 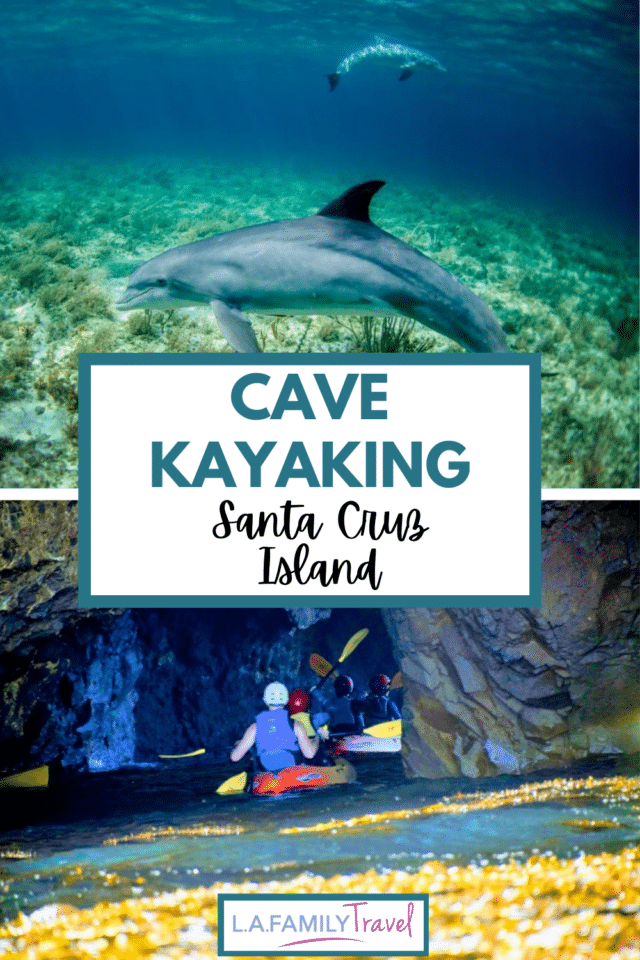