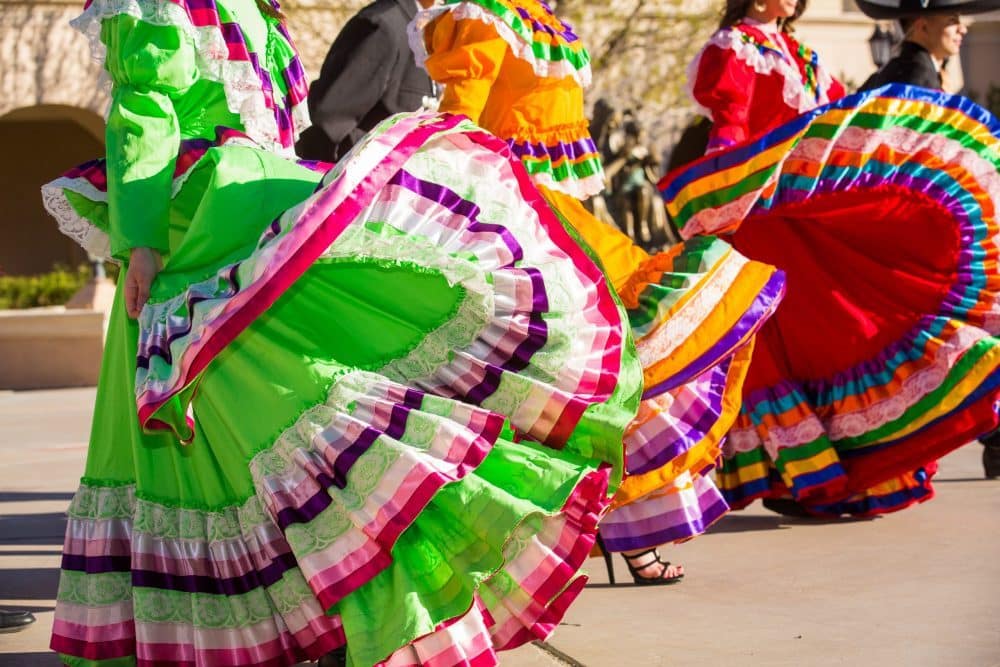 Add color and culture into your family’s Cinco de Mayo celebration by visiting historic Olvera Street, the “Birthplace of Los Angeles.” Less than a block from Union Station in the heart of Los Angeles, Olvera Street (“La Placita Olvera”) is a conveniently located Mexican marketplace, where you can find everything from handcrafted pottery to authentic birria quesadillas. On Cinco de Mayo, there will be live music, traditional dancing, vendors, kids activities, a beer garden, and — of course — delicious Mexican food, handmade that very morning.

Commemorating Mexico’s victory over French forces in the Battle of Puebla, Mexico, in 1862, Cinco de Mayo (“Fifth of May”) is a celebration of Mexican national pride, heritage, and culture. On this day, many Mexican families fly their national flag, cook traditional recipes, and come together to dance, sing, and party. While you may be inclined to think of Cinco de Mayo as Mexican Independence Day, it isn’t. That holiday isn’t until September and is called el Día de la Independencia.

Unsurprisingly, considering its Mexican heritage, La Placita Olvera hosts an annual event in honor of Cinco de Mayo. My wife’s family is Mexican, so every Cinco de Mayo we take a trip to La Placita to enjoy the festivities, stock up on handmade Mexican crafts, and spoil ourselves with delicious Mexican cuisine. Even if you aren’t Mexican, you can enjoy Cinco de Mayo as a great opportunity to expose kids to a rich cultural tradition. And there’s no better place in the greater Los Angeles area to do this than at La Placita Olvera. This highlight reel from the 2020 Cinco de Mayo festival gives you some idea of how much fun it’ll be:

Browse the Stalls and Shops

Open-air stalls, exhibitor booths, and historic buildings — selling everything from handcrafted pottery to leather to traditional Mexican clothing — line the narrow lane of La Placita Olvera. Our young girls loved perusing the assortment of piñatas, mini guitarras, lucha libre masks, Mexican candy, and other vibrantly colored souvenirs on display. My wife and I loved popping into the boutique shops to browse the authentic Mexican pottery, dresses, and talavera tiles. 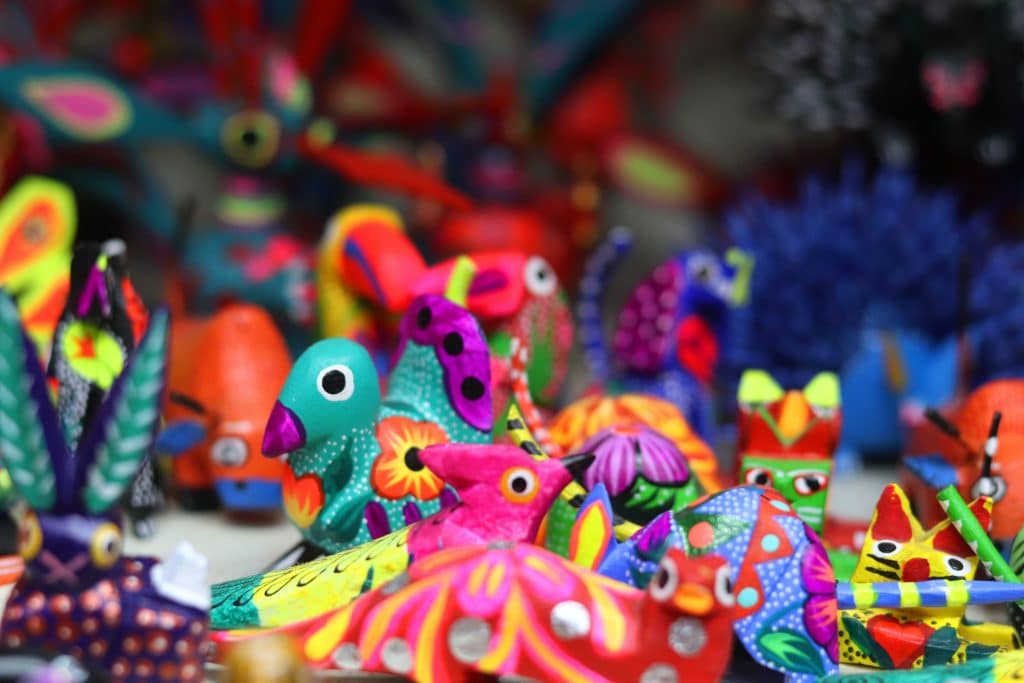 While they may resemble birds, these colorful toys are actually alebrije, a type of traditional Mexican chimera. Photo by Analuisa Gamboa on Unsplash.

Our first stop was Olverita’s Village, a cavernous retail store where you can find all manner of Mexican clothing, kitchenware, and traditional folk art. We bought my mother a set of salsa dishes and a matching pair of mugs for ourselves.

Afterwards, it was time to hit Andrea’s Gift Shop, world famous for its hand-made talavera tiles. There were so many to choose from; my wife and I probably spent half an hour sorting through trying to find just the right one. In the end, we decided on one depicting a woman dressed up for el Día de los Muertos with the words amor eterno written across it, signifying “eternal love.” It now has pride of place on our mantlepiece as a warm reminder of our recent trip to La Placita Olvera.

My wife and mother-in-law are fond of burning candles, especially around major Mexican holidays and religious occasions, so we stopped in at the Olvera Candle Shop, which sells all kinds of candles — from the scented to the sacred. They picked up really lovely custom candles, poured and etched in Mexico; we can’t wait to burn them on the Day of the Dead. 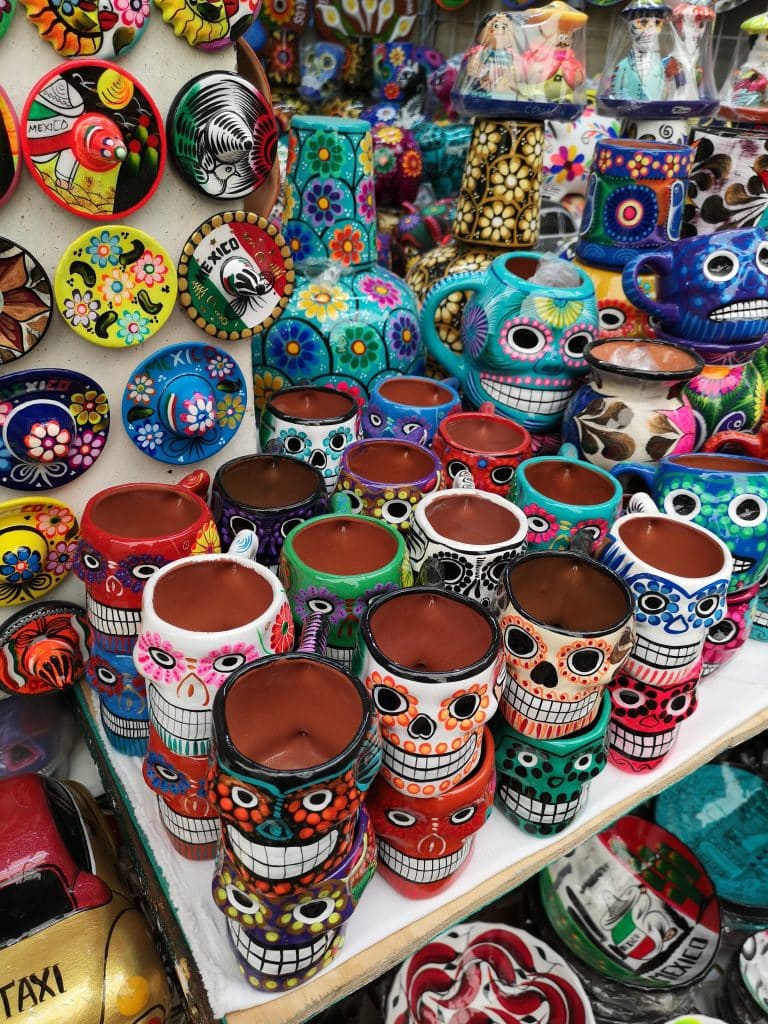 Mugs for Day of the Dead. Photo by Laurentiu Morariu on Unsplash.

Near the plaza stage, we found lots of local artists selling their work. My wife in particular found an artist named Jose Pulido who sells Day of the Dead stickers. We must have bought about twenty of his stickers, which have become lovely gifts and mementos of that day.

Finally, we headed into Murillo Leather Goods to find my father-in-law a surprise birthday present. If you’re looking for just about anything leather-related, Murillo is the place to be. (I saw more leather belts in the first five minutes than I have in my entire life.) Eventually we decided on a fancy wallet that had been hand-stitched in Mexico and which we thought he’d love.

Chow Down on Authentic Mexican Cuisine

The air at La Placita Olvera is thick with the aroma of authentic Mexican cuisine: as you enter the plaza, the scents of slow-roasted meats, hand-tossed tortillas, fresh vegetables, and spicy salsas welcome you. Without a doubt, this place is a celebration of Mexico, steeped in Mexican heritage, identity, and culture.

For breakfast, we stopped at the world-famous Cielito Lindo, a taquería that’s been in business on La Placita Olvera since 1934. Not much more than a kitchen, a shop front, and a few tables, this unassuming establishment sells some of the best handmade tacos in LA. We recommend drizzling ample portions of their homemade avocado salsa all over the freshly made tortillas and perfectly cooked meat for the authentic taco-eating experience. Be careful though: these taquitos may look small, but they pack a punch. Eat too many and you’ll be sleeping off the food coma for the rest of the day. 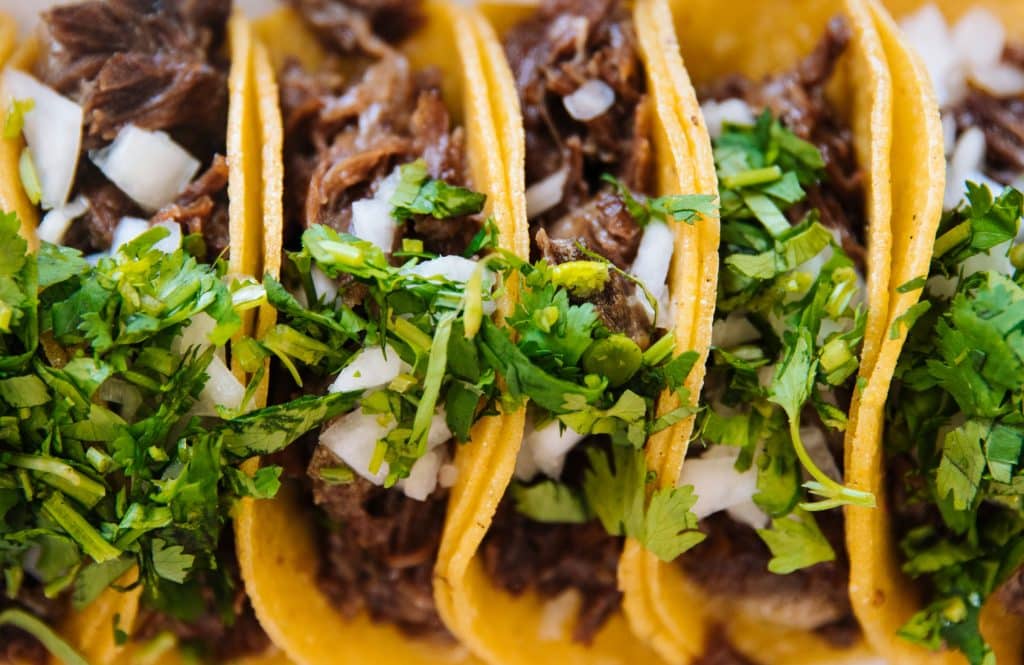 A row of juicy tacos, perfect for a breakfast bite. Photo by Jeswin Thomas on Unsplash.

Nothing tastes better on a hot day in LA than freshly-squeezed juice. Thankfully, the kind people at Velarde’s Fruit stand agree and have made it their mission to provide fresh juice and fruit snacks to those trying to beat the heat at La Placita Olvera. For our daughters, we bought two delicious pineapple juices, whereas my wife and I shared a refreshing horchata, a sort of cinnamon-flavored Mexican drink that I simply adore.

After a long day of rambling through the stalls and watching live music, we’d built up quite the appetite, so it was time to head on over to Chiguacle Sabor Ancestral de Mexico for some traditional Mexican food. This family-owned restaurant, serving delicious food since 2002, is one the best places to find Southern Mexican cuisine from Puebla, Oaxaca, Yucatan, and Michoacan in LA. A glass of their house ceviche is just the thing to cool off with after a hot May day. Afterwards, dig in with some Michoacan-style pork tacos, crispy mojarra fish, or enchiladas oaxaca. 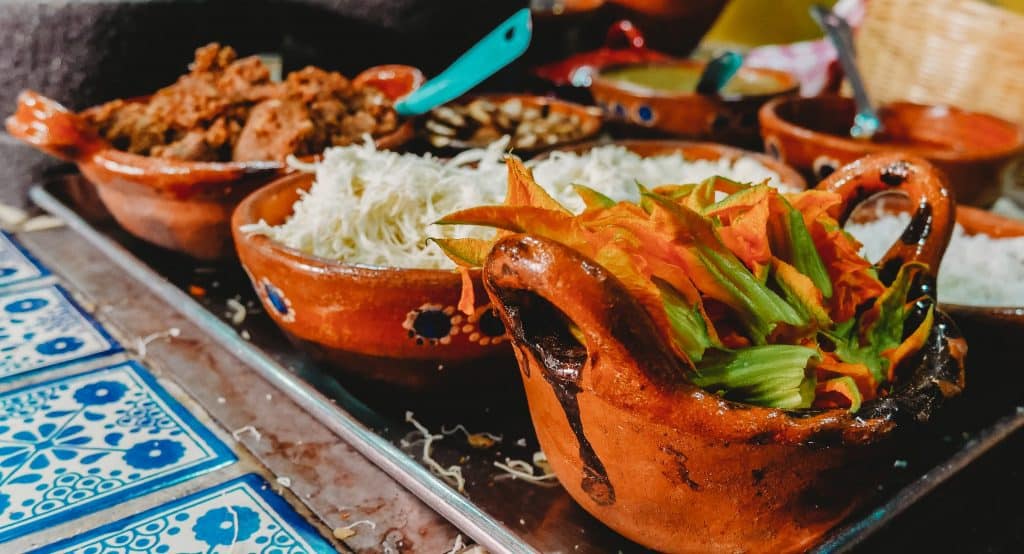 Still have room for dessert? Our girls certainly did! Nothing would satisfy them except heading over to Mr. Churro so they could get a few of these sugary delights.

Learn About The History Of La Placita Olvera And Los Angeles

Believe it or not, La Placita Olvera comprises only a small part of a group of landmarks, collectively known as El Pueblo de Los Angeles Historical Monument. It’s here, in LA’s historic district, where you can find museums, exhibits, and public events dedicated to LA’s past and the people that called that pueblito home. 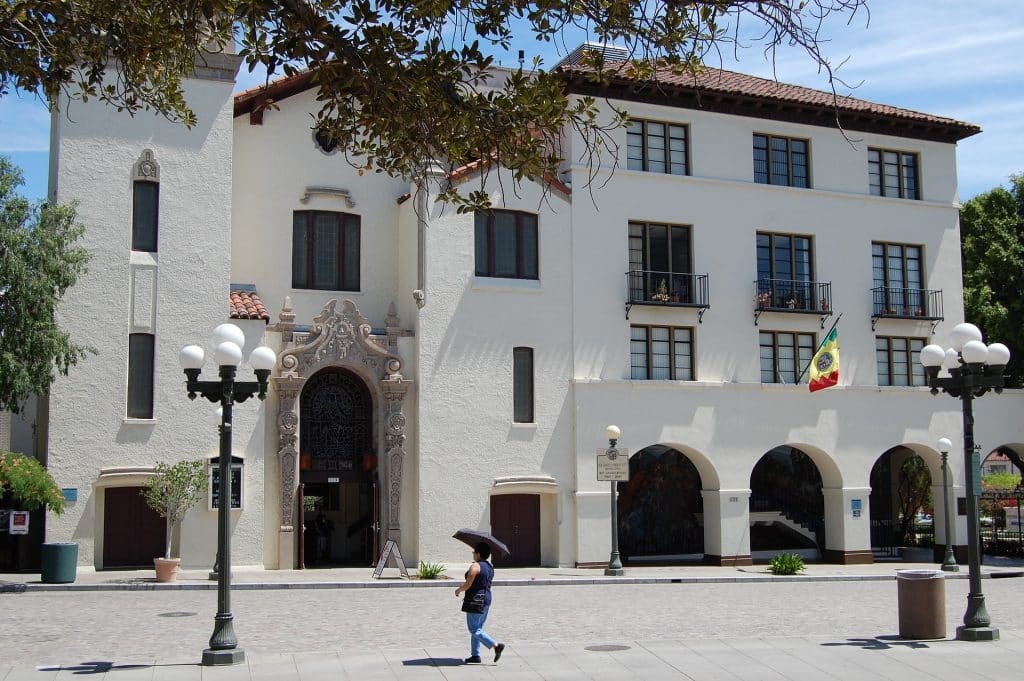 While walking down La Placita Olvera, you’ll no doubt spy a ramshackle cottage built of dry brick mud and timber and be inclined to think it’s a replica or model. It isn’t. This is the Avila Adobe, the oldest building in Los Angeles. Built in 1818 by Francisco Avila, a former mayor of the burgeoning pueblo, the rustic adobe cottage is now part of the El Pueblo Historical Monument and is open to the public as a museum, furnished as it would have been in the 1840s.

Across the street lie the remnants of a 19th-century homestead, known today as the Sepulveda House Block Museum. Inside you’ll find a restored view of what the house might have looked like the in the late 19th century, with cast-iron pots and pans, lofty canopy beds, and an enormous armoire. The museum is small, only requiring about five to ten minutes to peruse, and is completely free. It’s an excellent spot to rest, relax, and recover after all the hustle and bustle of La Placita Olvera.

At the end of the block sits LA Plaza de Cultura Y Artes, a museum dedicated to preserving and showcasing the history, culture, and story of Mexicans, Mexican Americans, and all Latinx in the LA area. As the center itself states: “LA Plaza is about learning, doing, and inspiring.”

Pro-Tip: The interesting, interactive exhibits at LA Plaza de Cultura Y Artes are perfect for teaching your kids about Mexican culture and history in a fun and informative way. Plus, admission is free!

In addition to La Placita Olvera and the other locations dedicated to Mexican heritage, there are a few other interesting attractions nearby that are also worth a look.

At the southern extremity of La Placita Olvera sits the Old Plaza Firehouse, the first volunteer firefighter unit in LA. Inside is a museum dedicated to the firehouse’s history, along with firefighting gear from the late nineteenth and early twentieth centuries.

Also, there’s the Los Angeles United Methodist Museum of Social Justice, located right across the street from La Placita Olvera. We spent a sober hour browsing the museum’s haunting exhibitions that depicted diverse topics such as deported veterans, police brutality, the Black Lives Matter movement, and the plight of Central American refugees. While not the most fun activity of the day, we certainly walked away with a deeper feeling of personal accountability and social responsibility.

Don’t Miss! Most Fun at Conrad Punta de Mita in Mexico with Kids

The best way to get anywhere in Los Angeles, including to La Placita Olvera, is by car. There are plenty of conveniently located parking lots within walking distance, making it easy to visit the plaza, even during busy Cinco de Mayo. If you plan on using public transit, the Union Station stop, located on famous Alameda Street, is just a block away. For those unfamiliar with LA’s transit system, read this informative article that covers the basics.

For those coming from out of town, there are a number of highly affordable and luxurious hotels in downtown Los Angeles located nearby La Placita Olvera.

At the top of the budget range sits Level – Downtown South Olive, a luxury hotel offering all the amenities of home but in a high-rise Los Angeles-style apartment with a fully-equipped kitchen. Enjoy panoramic views of downtown LA during the day and close proximity to world-class restaurants and bars during the night.

Is historic glamor more your style? In that case, we recommend the Biltmore Los Angeles, a hotel dedicated to preserving the elegance and panache of a bygone era. The exceptional service, comfort, and hospitality in each of its deluxe rooms will exceed your expectations. No wonder the Biltmore has been a staple of LA tourism since 1923.

Use this interactive map to find deals on a VRBO or another hotel close to where you want to stay. 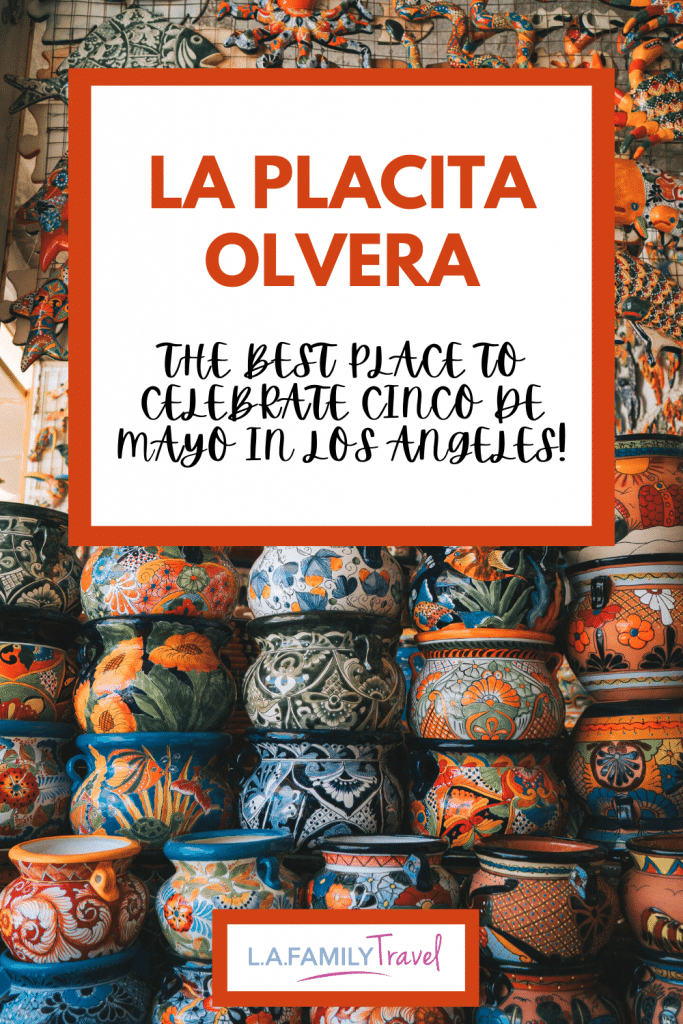 Matthew LaMourie II is a freelance writer and photographer based in San Francisco, CA. He is a regular contributor to a number of online publications, where he covers such diverse topics as travel, lifestyle, cooking, and classic short stories. When not writing, Matthew likes to explore new and interesting places together with his growing family.