Experience the Wild Side of Florida 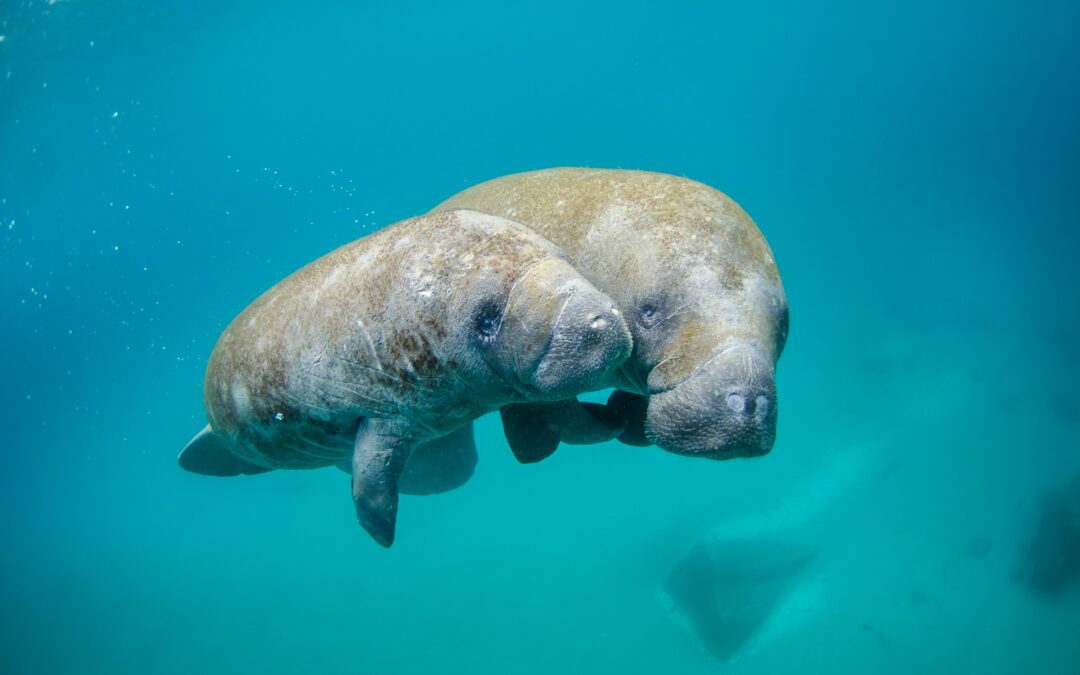 When my husband told me at the beginning of November that he had vacation days to use or lose come January, that’s all I needed to start planning something fun.  Since we live in New England, Florida seemed like the best place to travel to in December. It’s not too far, not too cold and has lots to do, including seeing wildlife that you won’t see anywhere else in the country.

After picking up our rental car, we headed to our first adventure, kayaking at sunset in search of bioluminescent comb jellies.  Our reservations were with Cocoa Kayaking at 4:30 pm. Unbelievably, we saw dolphins working together to hunt by pushing fish toward the shore with waves they created. We admired birds like ospreys sitting in the trees, and learned all about the different kinds of mangrove trees as we kayaked through them. 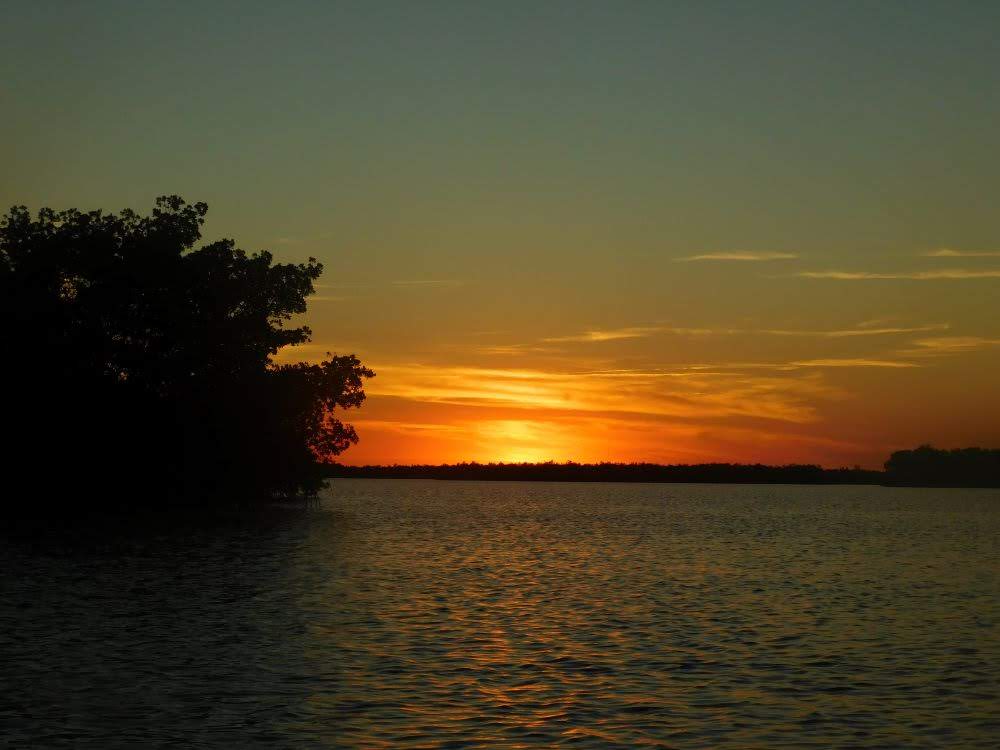 The sun set, scattering a gorgeous orange hue across the sky and that’s when the fun began! Our guide, Cameron encouraged us to scoop beautiful little jellies into the nets supplied by the tour company.  Unlike their stinging counterparts, a comb jelly is harmless, so you can gently stroke its tentacles and watch as it glows blue! In fact, even passing near them in a kayak or catching them in the net makes their blue bioluminescent radiate.  Comb jellies are typically seen from October through March but from June through November, it is the bioluminescent plankton that will light up the water around your kayak.

Where to Stay in Cocoa, Florida

We spent one night at the Best Western Cocoa Inn in Cocoa, FL which was just 30 minutes from the kayak meeting point and 30 minutes from Merritt Island, where we planned to go the next day. It has lovely facilities, an outdoor pool, and a comfortable bed. 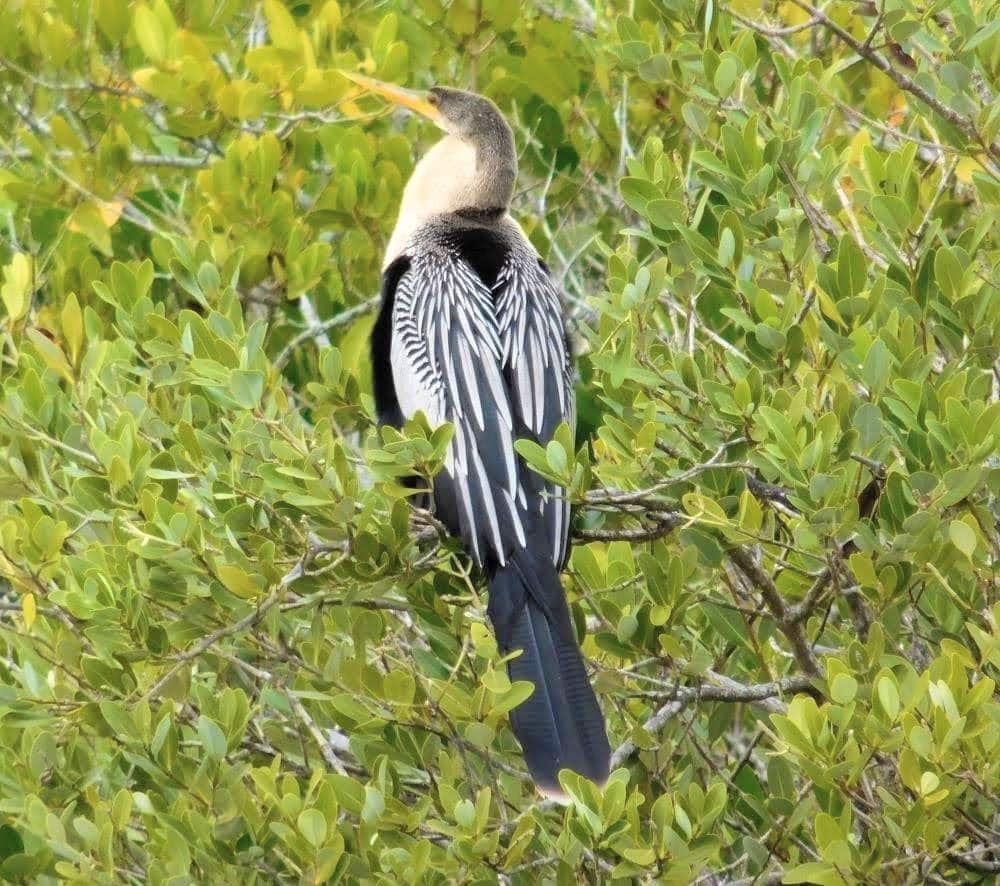 An Anhinga, a bird found all over Florida including at Merritt Island, can oftentimes be found with its wings spread, drying it feathers and making it appear larger than it is © Paula Vogler

A second day out in nature at Merritt Island National Wildlife Refuge is a wonderful way to spend time soaking up the sun and breathing in the clean, fresh air, particularly if you love birds. Stop in at the Visitor’s Center first and then head out on the 7-mile Black Point Wildlife Drive.  If you want to get out of the car, there are short walks and trails in the refuge as well. There is a reasonable $10 entrance fee per car. Don’t forget binoculars! 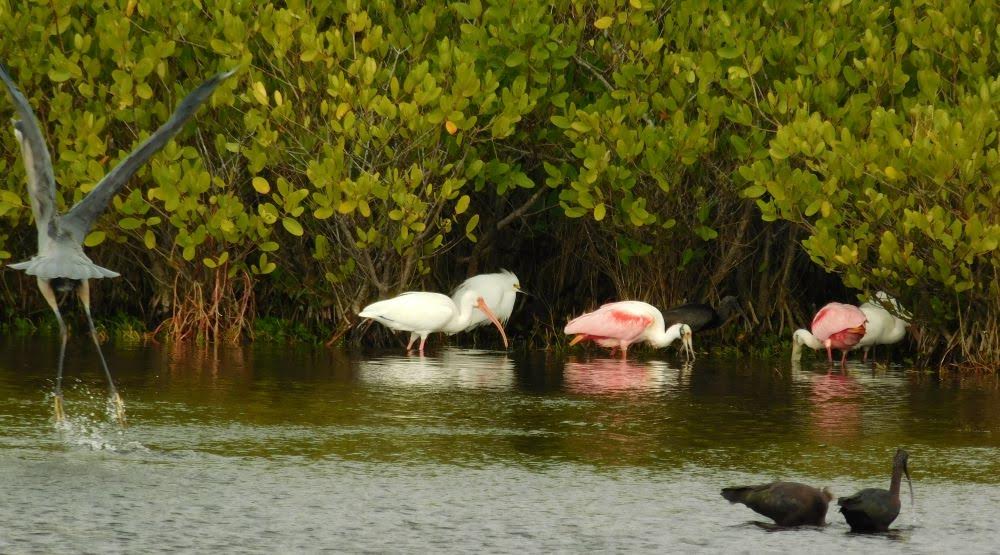 It almost doesn’t seem right to visit Orlando and not stop in at Walt Disney World, especially if there are free things you can do there. To continue the nature-themed vacation, head to the Animal Kingdom Lodge, which is only 75 minutes from Merritt Island, and check out some of the African animals that call it home. If you stop at the concierge, you can pick up a copy of their “Animal Viewing Guide” that will tell you all about what you might see, from giraffes and zebras to gray-crowned cranes and wildebeests. Heading to the second floor of the hotel will give you the best view of the grounds but going out the back door to the actual area where the animals might be will get you the closest to them. 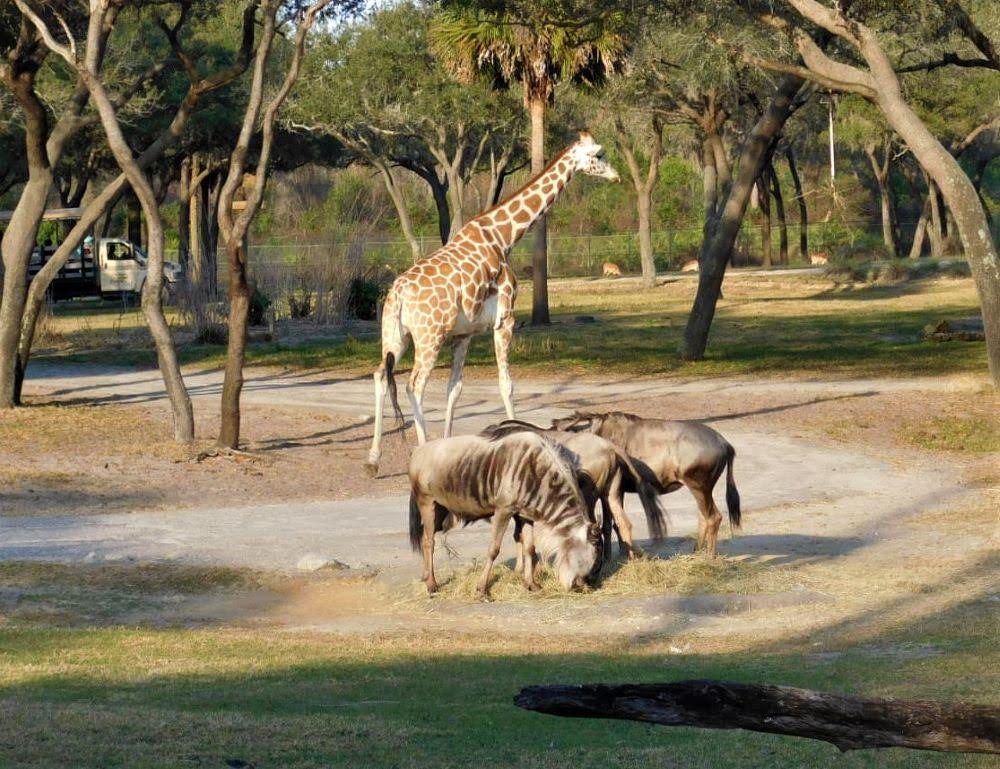 Wildebeests and giraffes are just some of the animals you might see behind the Animal Kingdom Lodge at Disney World. © Paula Vogler

You can also grab a bite for dinner at the buffet in Boma, one of the three restaurants in the Animal Kingdom Lodge. While it’s not free, it is definitely worth the $49 ($27 for ages 3-9) as you get to sample soups, salads, entrees and desserts from over 50 African countries, with some American dishes as well.  Dinner is served from 5:00-9:30 pm and reservations are recommended. You can check out the latest buffet offerings here. 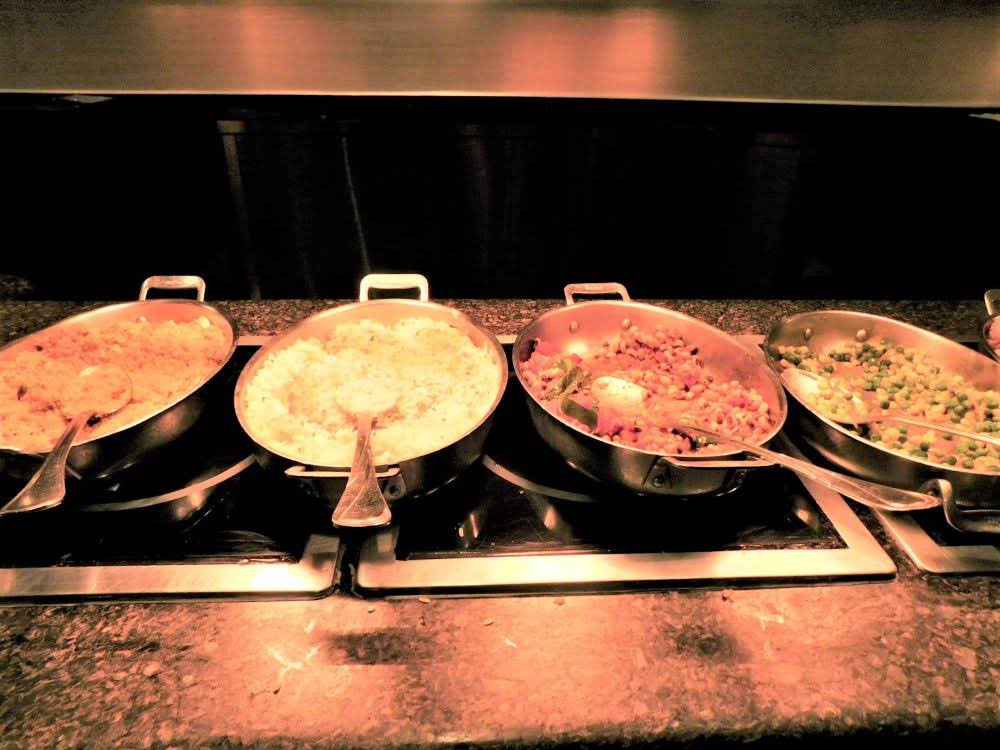 Buffet at Boma, one of the restaurants at Animal Kingdom Lodge at Disney World © Paula Vogler

We opted to visit Disney Springs in the evening (free parking and just a 15-minute drive from the Animal Kingdom Lodge!) to walk around, watch the volcano on top of the Rain Forest Café ‘erupt,’ try free chocolate samples at Ghirardelli, take lots of photos and enjoy whatever entertainment we happened upon. There are also many Lego creations spread throughout Disney Springs, including the enormous water dragon that seems to be springing from the lake.  The Lego Store has some fun sculptures that will thrill fans, both young and old. 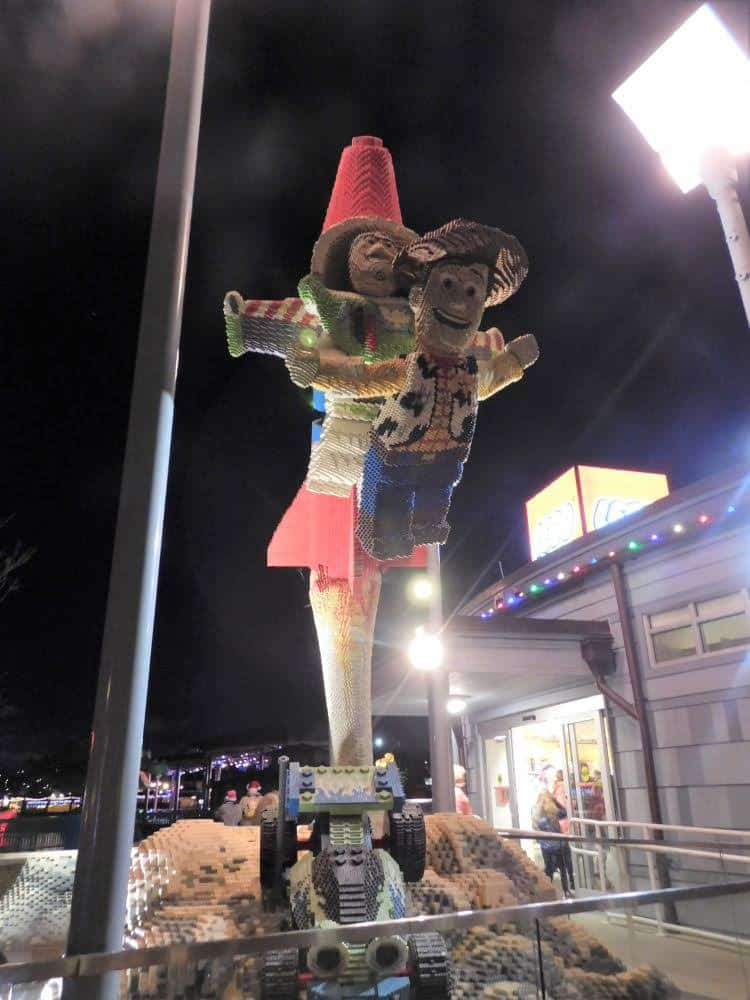 Buzz Lightyear and Woody soar above the walkway at the Lego Store. © Paula Vogler

Where to Stay Near Disney Springs

We stayed at the Embassy Suites by Hilton in Lake Buena Vista which was about a 15-minute drive from Disney Springs. 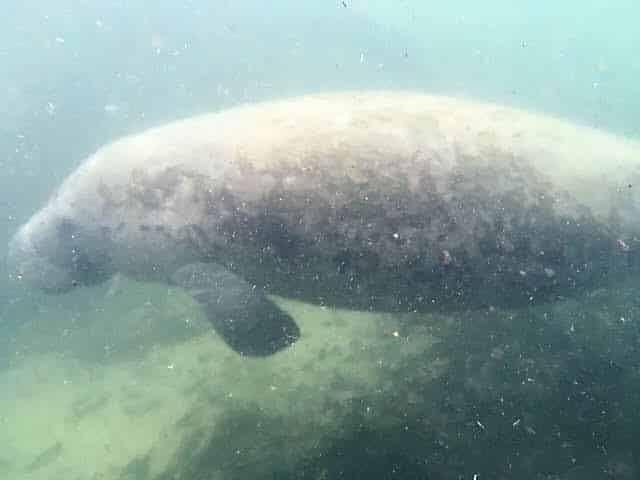 One of many manatees that glide gracefully by on their way to warm up at the springs. © Paula Vogler

On the morning of the last day, drive a little over an hour and a half from the Embassy Suites by Hilton to Bird’s Underwater Manatee Dive Center in Crystal Springs for the chance to swim with and observe these gentle giants.  There are other manatee swim companies out there but Bird’s is on the water (rather than meeting at a public dock somewhere) and gives you a full wetsuit (not just a top) to help keep the chill away if it’s one of the cooler mornings, as well as a mask, snorkel and fins. On the boat, you can try hot chocolate, tea or coffee during the winter months and redress in a small, enclosed changing area after you are finished swimming. Three times are typically offered for tours (6:30 am, 11:00 am and 2:00 pm) last for 2-3 hours.

Experience the Wild Side of Florida! Add a swim with manatees to your next trip to Florida. Some are inquisitive; one stopped in front of my husband, looked him in the eye and reached out a flipper to feel his wetsuit.

Click To Tweet
We went at 11:00 am and saw nearly 50 manatees including some babies warming up in the springs! The manatees are amazing, so graceful and so BIG with many even covered in barnacles.  Some are inquisitive; one stopped in front of my husband, looked him in the eye and reached out a flipper to feel his wetsuit. I was so surprised by the interaction I couldn’t get my camera up quickly enough to snap a photo. Peak manatee season is November-April and tours cost $65 during that time, $60 the rest of the year. 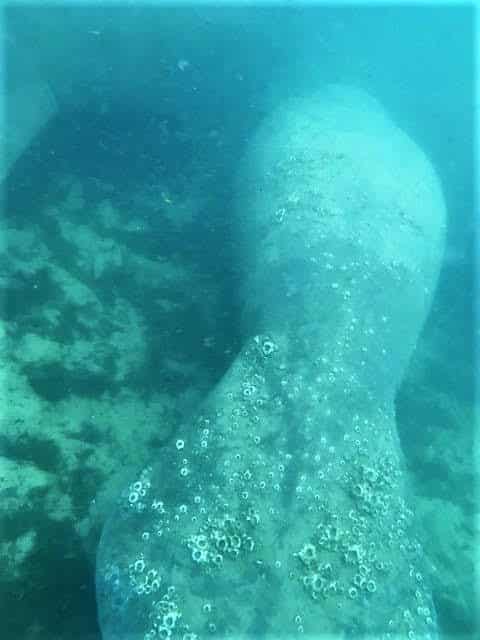 How to get there

There are plenty of non-stop flights from LAX to Orlando (MCO) and if you are opting for a Friday-Monday trip, you could use Friday as your travel day, stay at a hotel in Orlando and then fly home on Monday evening after swimming with the manatees.

To see things in Florida beyond Magic Kingdom walls requires a car but short term rentals, say from Friday night until Monday night, are typically under $100.

Paula Vogler is a writer and reporter for many local papers in Massachusetts where she calls home. She is an avid traveler who has been to all 50 US states (many more than once), 20 countries, and 5 continents and is always ready with one foot out the door to set off on a new adventure. As one philosopher said, “The world is a book and those who do not travel read only one page.”