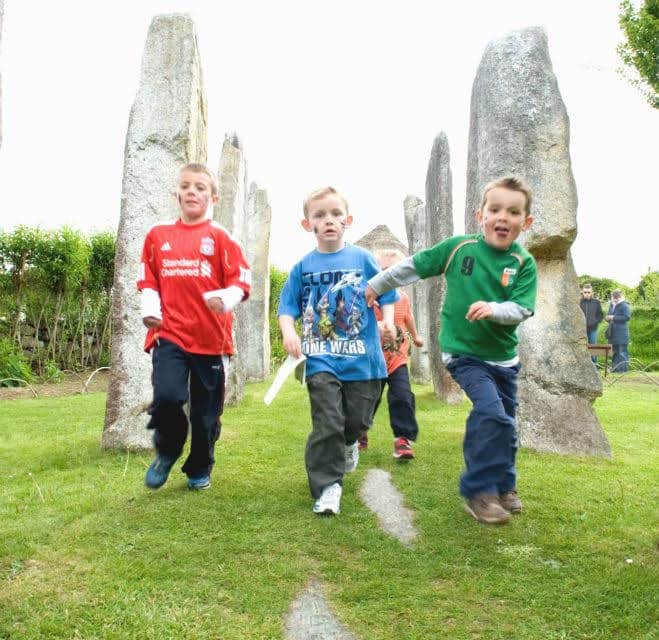 Most Irish school children learn about Brigit, an early Christian saint who was almost as important as Saint Patrick – she even has her own holiday on February 1st (without the green beer). But Brigit is also a significant part of Irish mythology because before Christianity came to Ireland, she was the main goddess of the land. She is the thread that connects pre-Christian times to the modern-day. That’s why a family trip to Galway is the perfect combination of adventure and history. 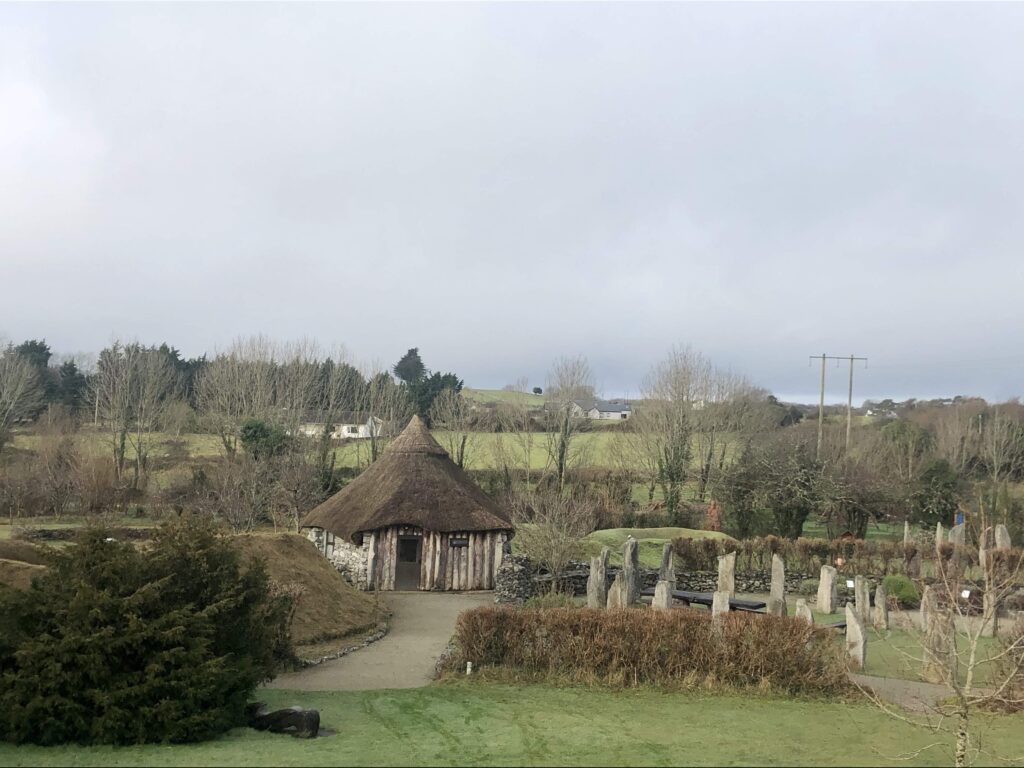 The best view of the gardens is from the roof of the stone chamber. Photo by Samantha Davis-Friedman

Families traveling to Ireland can learn all about Brigit at Brigit’s Garden, an 11-acre family-friendly outdoor experience about 10 miles from Galway. Four interactive gardens designed to teach visitors about Celtic mythology are inspired by the Celtic seasonal cycle. The gardens are whimsical and joyful, but also symbolic and contemplative, so every member of the family will take something different from the experience.

“What attracts visitors here is that they’re going to have a nice walk in a beautiful garden, but there are all the layers of Celtic heritage that are built into it,” says Founder and Director Jenny Beale. “People love absorbing some of the Irish culture and history and mythology without having to be in a museum to do it.”

People love absorbing some of the Irish culture and history in these Celtic gardens – a must add to your Ireland vacation.

Beale explains the Celtic year was seen as a circle divided into four quarters, and each one began with a festival. Therefore, the four gardens represent the cycle of the seasons – Samhain (pronounced Sow-en), Imbolc (pronounced Im-ulk), Bealtaine (pronounced Belt-an-a), and Lughnasa (pronounced Loo-na-sa). 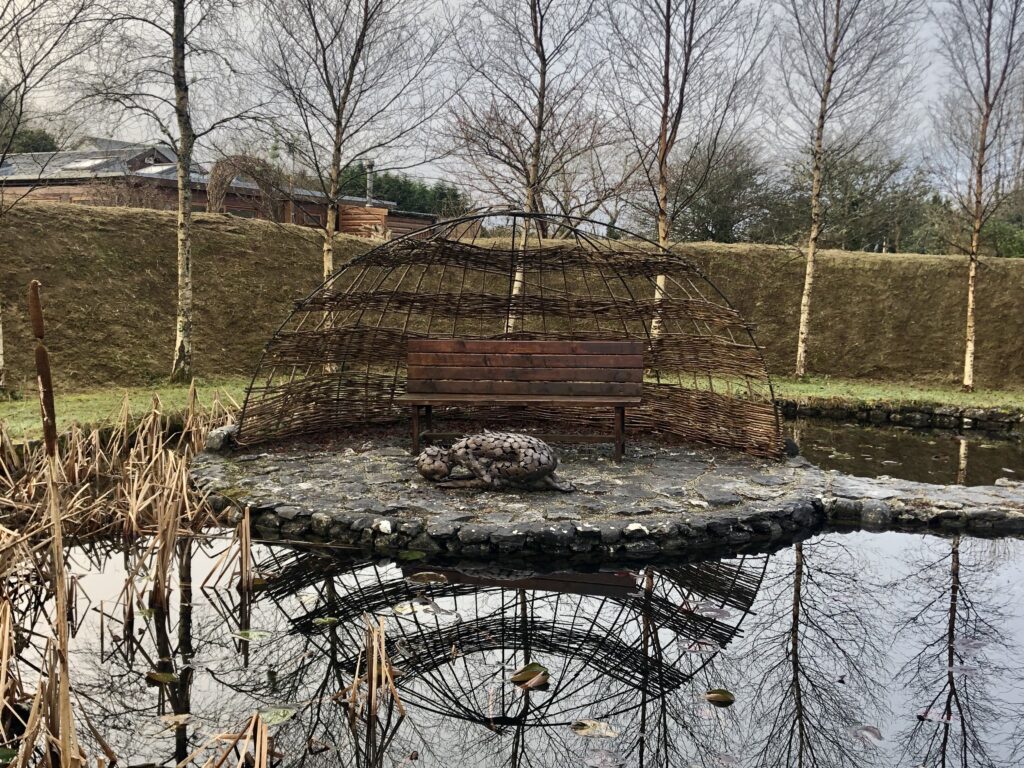 The theme for the winter garden is shelter from the winter storms represented by an Irish basket protecting a sculpture of a sleeping lady. Photo by Samantha Davis-Friedman

Samhain is the old Irish name for Halloween. Since the Celtic new year was actually in November, Halloween was the start of the winter season and the new cycle of the year. The central theme in this garden is shelter from the winter storms represented by an Irish basket protecting a sculpture of a beautiful sleeping lady made of Silver Birch leaves. According to Beale, the lady of leaves encapsulates the Celtic view of winter, where nature is resting and will awaken in the spring.

At the center of the winter garden is a lovely pond. For adults, this serves as both an actual and symbolic reflective space provided by the Silver Birch trees over the water. Kids will enjoy looking in the water for pond creatures. Here, families will also see what Beale calls “the largest lady in Ireland,” the small hills surrounding the garden that form the outline of a sleeping woman who also represents the earth sleeping in the wintertime. In the summer, the lady becomes a natural meadow, filled with colorful flowers that are visited by bees and butterflies. 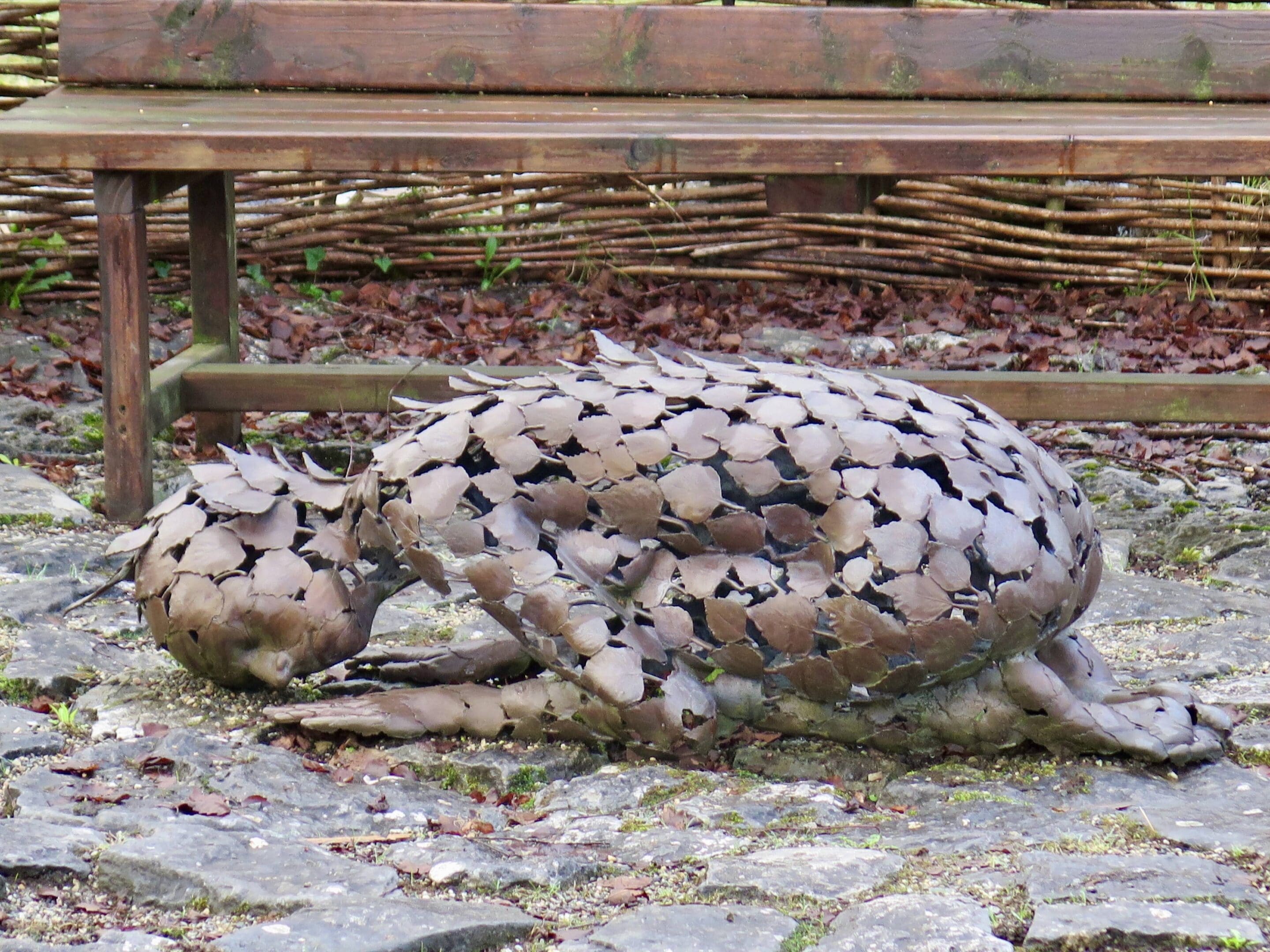 The lady of leaves represents the Celtic view of winter, where nature is resting and will awaken in the spring. Photo by Samantha Davis-Friedman 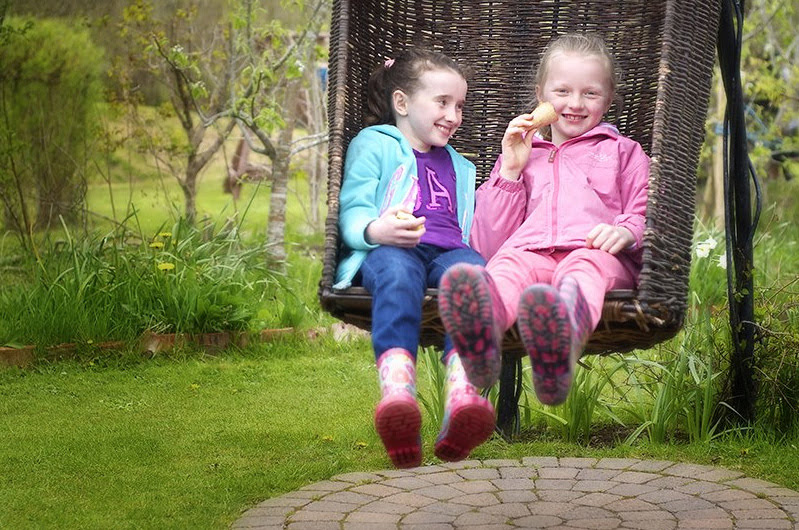 The spring garden’s hanging basket swings are popular with children “from naught to ninety.” Photo courtesy of Brigit’s Garden

The spring garden represents youth, birth, childhood, and fun. Because of that, this garden has hanging basket swings, which Beale says are popular with children of all ages “from naught to ninety.” This garden is also the location of a beautiful wildflower meadow and fruit trees, including traditional Irish apple varieties. A carved triple spiral in the sunken garden, outlines the stories and symbols of Brigit, both as a Christian saint and pre-Christian goddess of the land. 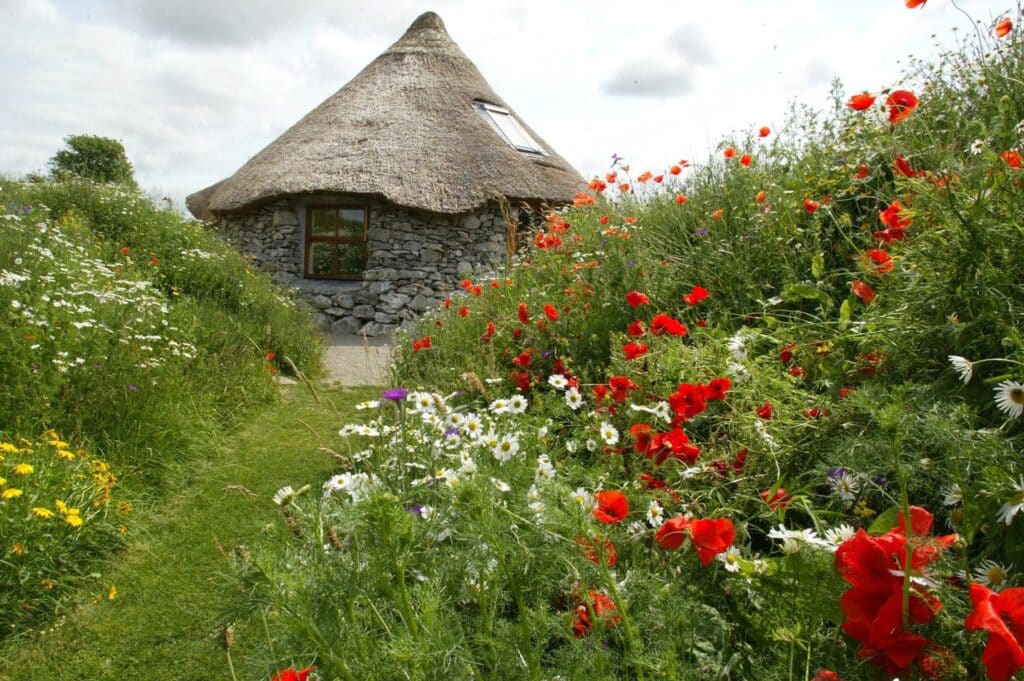 Beale notes that spring starts very early in Ireland – on February 1st. Although the garden takes the old Celtic name for spring, February 1st is now called Brigit’s Day. The holiday is celebrated across Ireland to commemorate the story of St. Brigit, who made a woven cross out of rushes to baptize a dying Irish chieftain. Nowadays, Irish families gather together to celebrate the return of spring on February 1st and make their own St. Brigit’s crosses, which resemble the woven yarn “God’s Eyes” that many American kids make at summer camp. 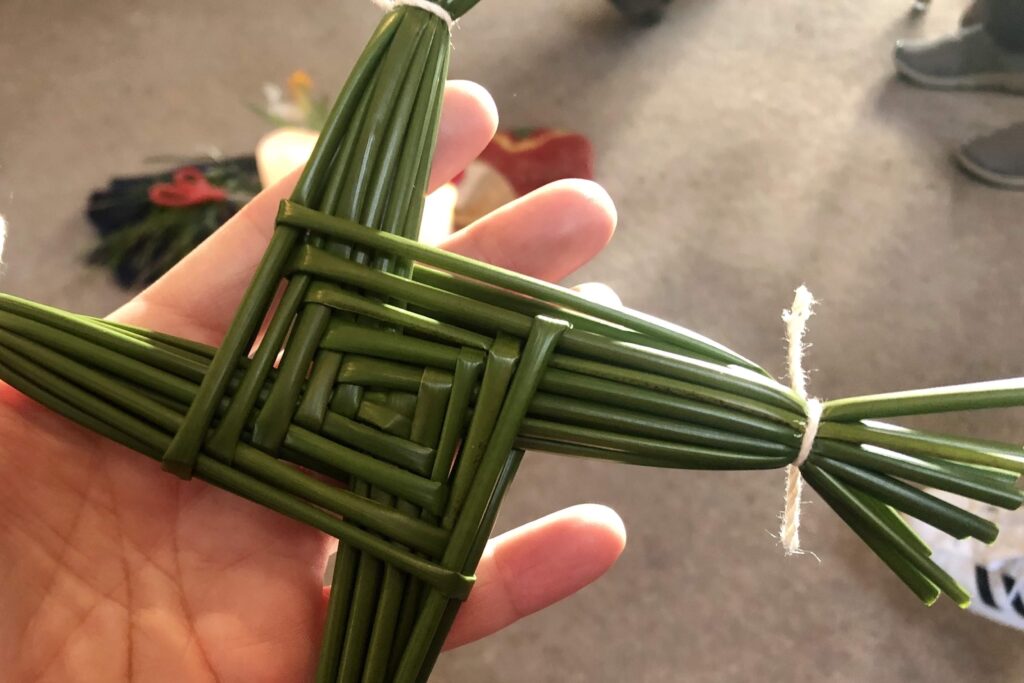 On February 1st, Irish families hang St. Brigit’s crosses over the door to provides good luck and protection over the house for the year – Photo by Samantha Davis-Friedman

“The tradition is to go out to the fields as a family, collect your rushes, and sit around the fireplace,” Beale says. “Then, you hang the cross over the door, and it provides good luck and protection over the house for the year.”

Families visiting Brigit’s Garden can participate in a workshop to make their own St. Brigit’s crosses out of reeds to take home as souvenirs.

“It’s a lovely thing to do, and it’s quite quick and easy,” Beale says. “I think it’s so important to get hands-on for the traditions and participate in them.” 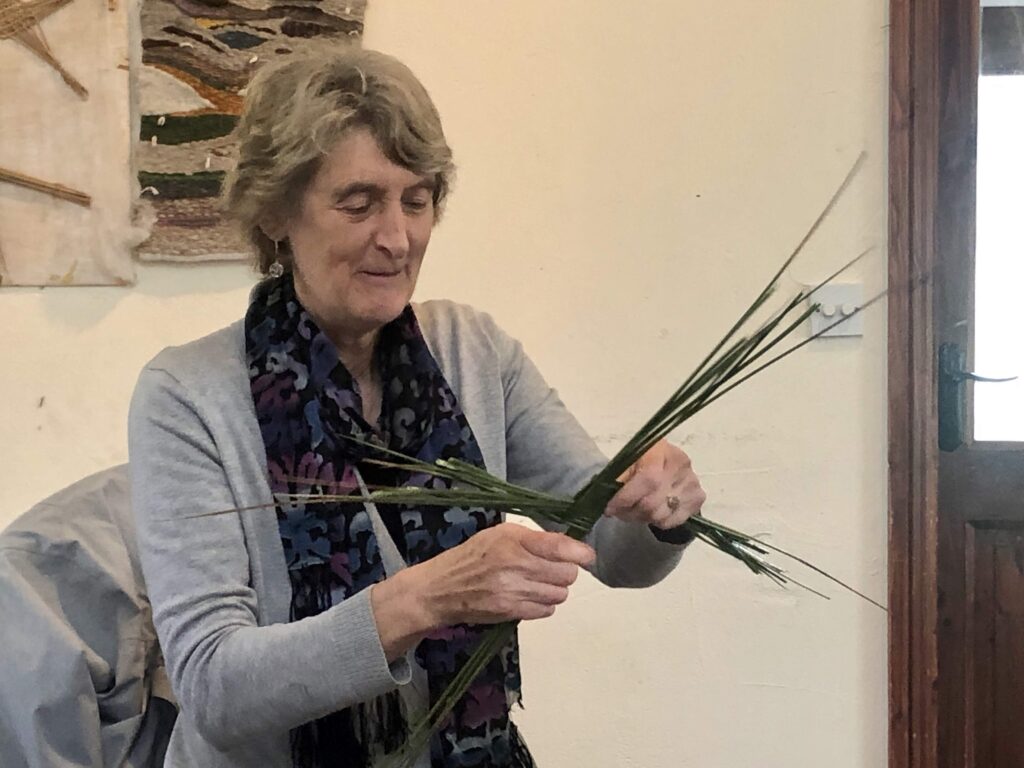 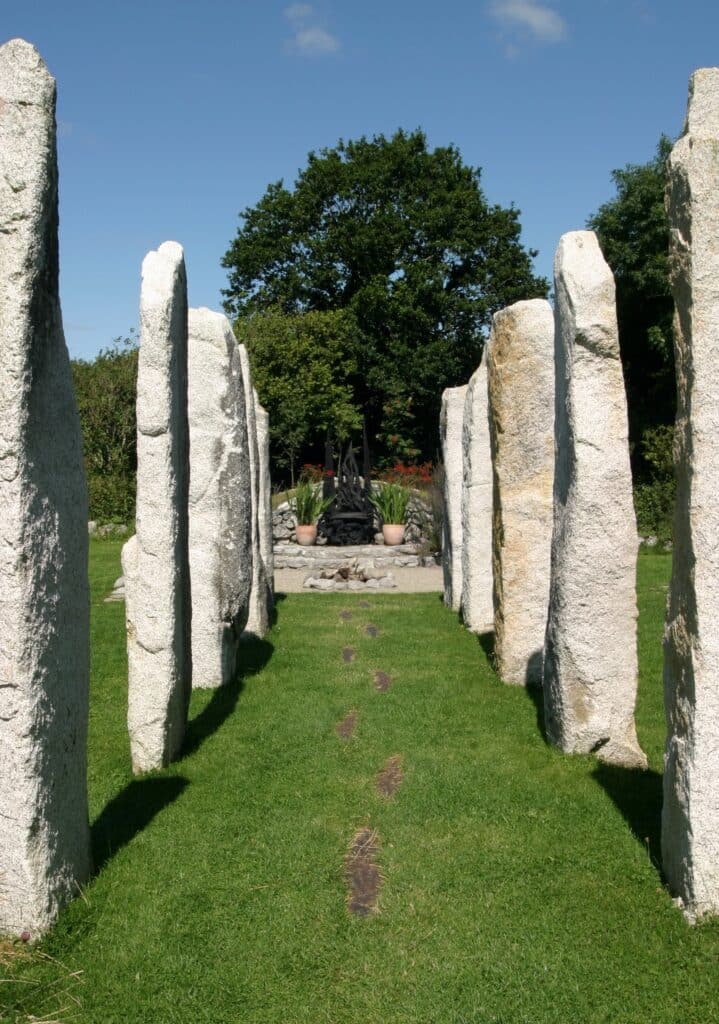 The summer festival of Bealtaine – or May Day – is one of the great fire festivals celebrating the bright half of the year and the coming of the summer’s warmth. Summer is also the time for young adulthood and marriages, so it’s no surprise that this garden is a popular spot for weddings. 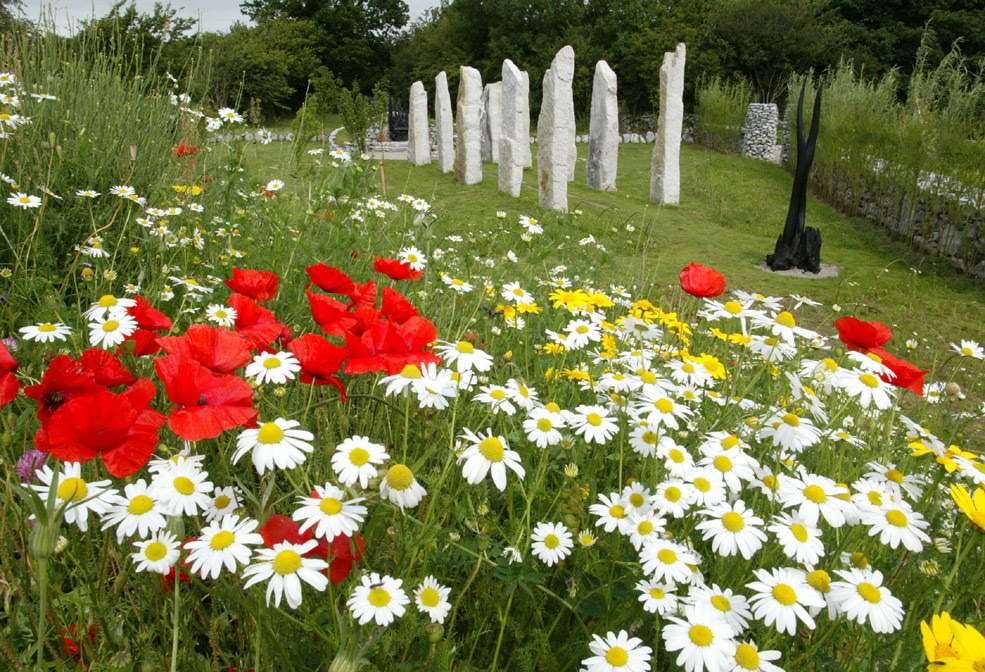 The centerpiece of the summer garden is a sculpture of flame figures that lead to a processional way of standing stones and a throne made of bogwood, which are 6000-year-old tree trunks that were naturally preserved in the acid water of the bogs.

The Lughnasa garden has two standing stone circles that represent circles for dancing and feasting but also for celebrating the end of the year and the end of the cycle. The beds in this garden are also filled with herbs to provide aromas of the harvest. 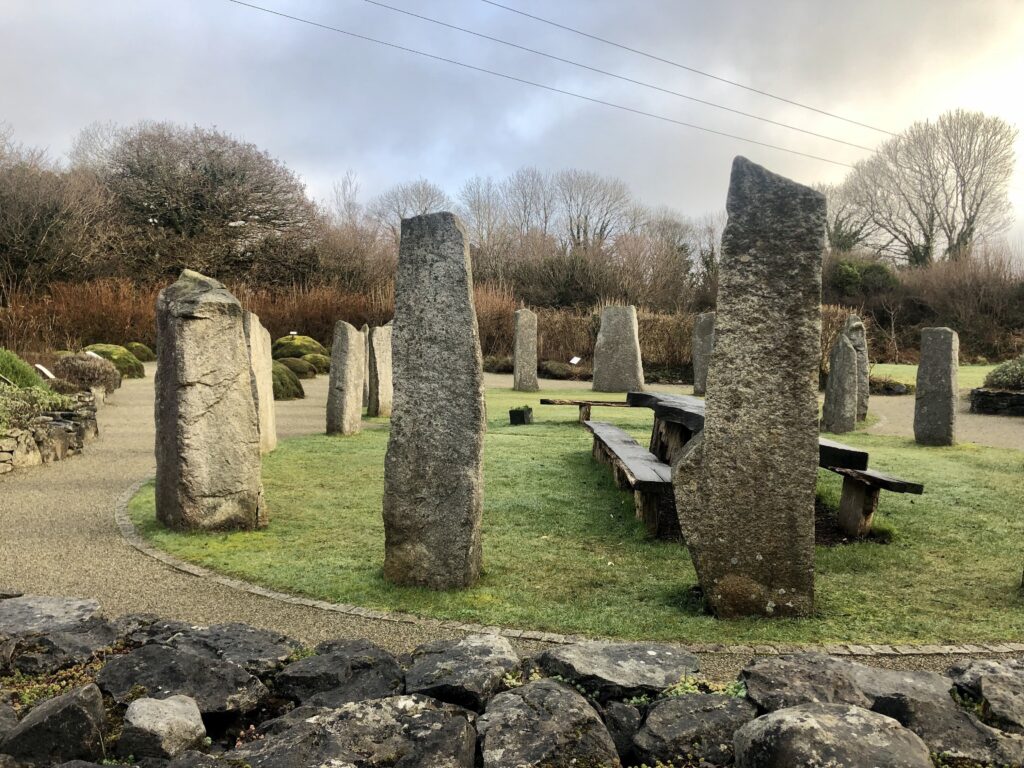 The garden’s new Earth Quest adventure challenges kids (and their parents) to go on an adventure where they’re tasked with solving puzzles and spotting things as they travel through the nature trails. Along the way, they will encounter a ringfort (or fairy fort), a water feature where kids can play with water locks and canals, and the largest sundial in Ireland. 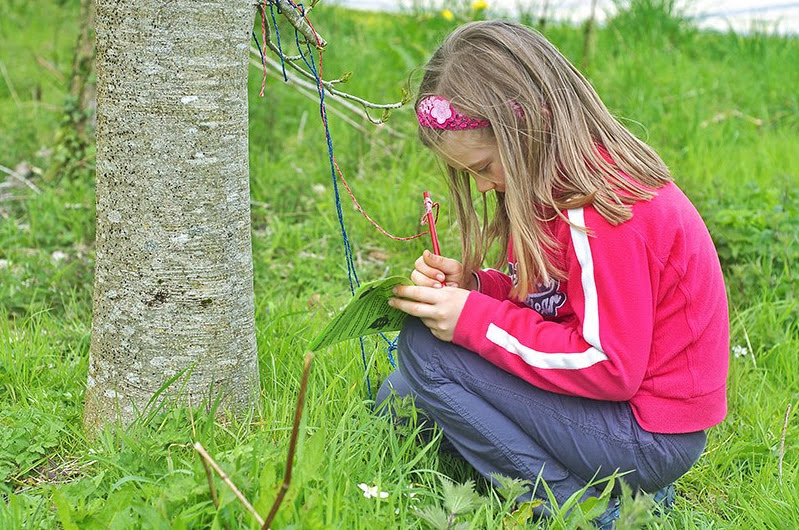 The Earth Quest adventure challenges kids to solve puzzles and spot things as they travel through the nature trails. Photo courtesy of Brigit’s Garden

“The whole place is a play area. Kids just love it here,” Beale says. “They can run free and enjoy themselves and be out in a natural environment and forget their screens for a while.”

Another extremely cool feature of the garden is the reconstruction of a Pre-Celtic stone chamber that’s built exactly like Irish stone chambers in 300BC with the stones balanced on top of each other. As families duck through the low entrance – tall people beware – they pass through a little passageway to reach the actual chamber. After taking a look inside, families should make sure to go up the stairs outside and check out the view from the roof. 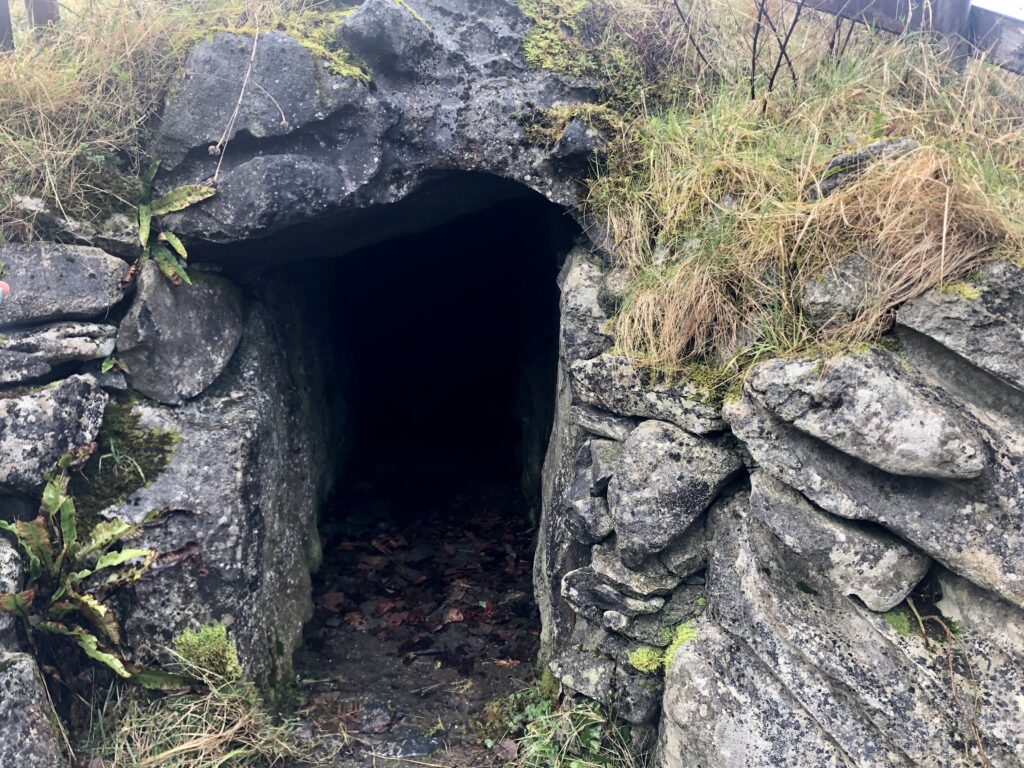 Families can go into a reconstruction of a Pre-Celtic stone chamber that’s built exactly like Irish stone chambers in 300BC. Photo by Samantha Davis-Friedman

“There is magic in the air at Brigit’s Garden, a particular kind of natural magic full of Celtic stories, fairies, and wildflowers,” Beale says. “For families, there is the additional fun of the Earth Quest trail, getting up close to nature, and exploring the stone chamber, camera obscura, and giant sundial. There is also lots of opportunity for natural play, and a visit would not be complete without some delicious local food in the Garden Café.”

Brigit’s Garden is open 10am to 5:30pm daily from March to October and 10am to 5pm daily from November to February. The garden is closed from December 24th to January 31st and re-opens on February 1st for a St. Brigit’s Day celebration.

Brigit’s Garden is just a 19-kilometer drive north of Galway city (about 20 minutes) in Rosscahill at the gateway to Connemara, between Moycullen and Oughterard.

Another option is to catch the CityLink bus towards Clifden. The bus leaves from the CityLink bus station (next to the railway station) and just ask the driver to stop in Roscahill. It’s a 15-20-minute walk from the main road, but if you call ahead (and it’s not a busy time), someone from the Garden may be able to pick you up from the bus stop.