A Long Weekend In La Jolla Shores with Kids 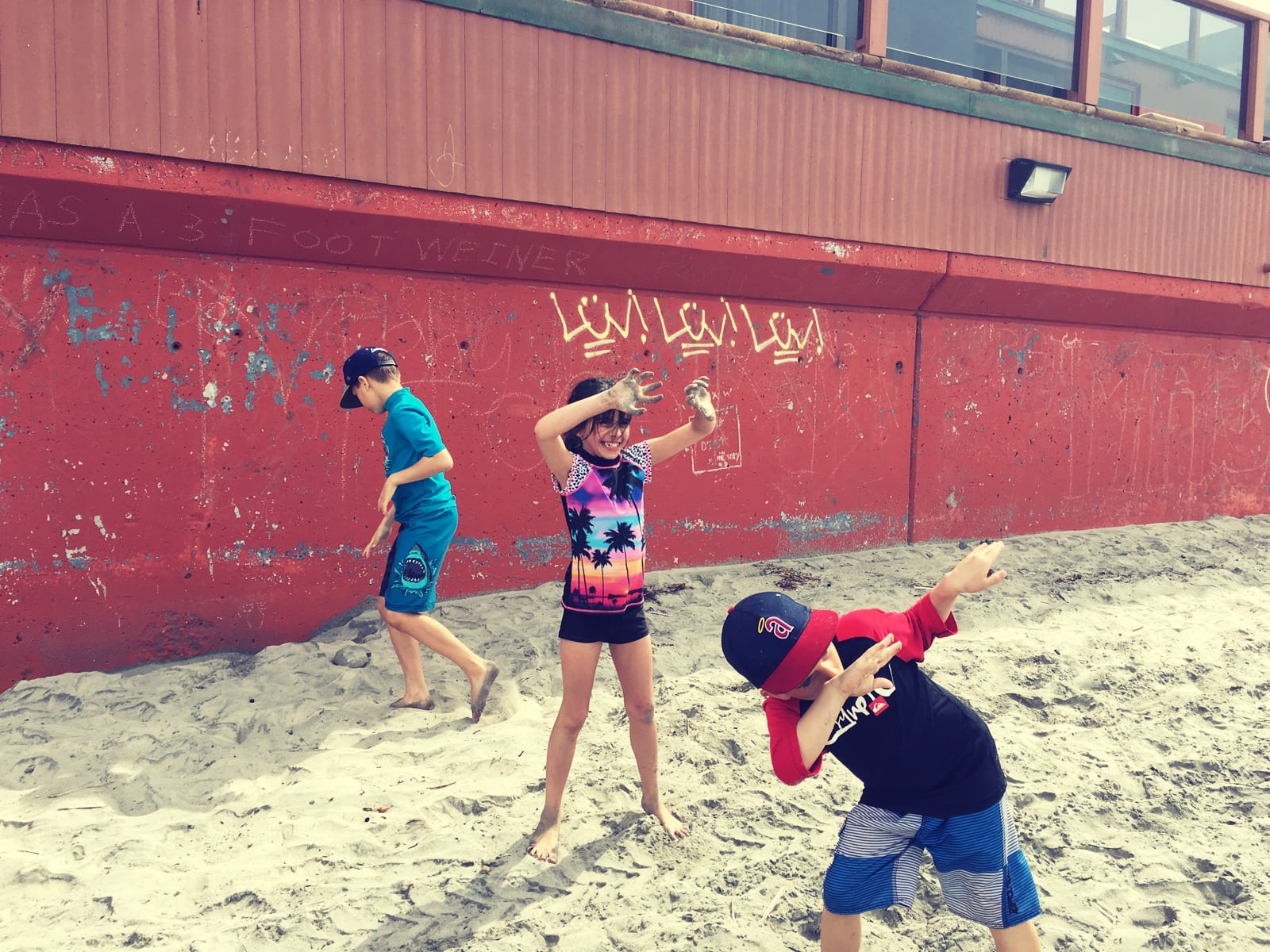 This is more than just a travel story. It’s a love story that takes place on the road. Its latest chapter took place during a family trip to La Jolla Shores, California. It’s a tale of two families who used to live in the same town and spent a lot of time together. But now, these families live on opposite sides of the country.

Great family friendships are hard to establish. The husbands, wives, and kids all must connect. That’s a lot of moving parts. So when our friends, The Steinbergs, who are that perfect fit, moved to Michigan from Los Angeles so Adam, or Steiny, could accept a tennis coaching position at the University of Michigan, we were sad. Though, we told them we were happy. Because that’s what friends do. Last March, Steiny planned a trip to La Jolla Shores to have his team play in the Pacific Coast Men’s Doubles Championship at the La Jolla Beach and Tennis Club, the site where Jimmy Connors, John McEnroe, and Arthur Ashe played in tournaments before they went pro. When Steiny’s wife, Casey, decided to fly in at the end of the week with their 7-year-old daughter, Mia, we decided to join them. Now, Mia is like a damp washcloth on the fevered forehead of my two hot-blooded sons, 7-year-old Knox and 9-year-old Kaleb. Knox is forever trying to woo his older lady friend into paying attention to him while she struts around Kaleb, the slightly older boy who puts a sparkle in her cheek. 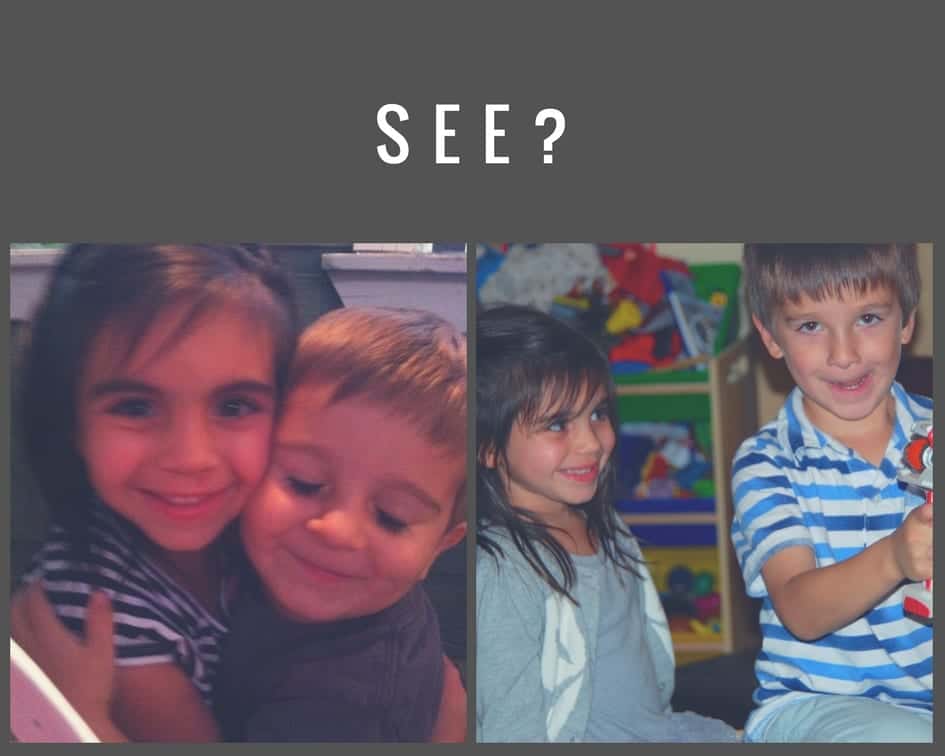 Steiny booked a room at the tennis club’s sister property, the La Jolla Shores Hotel, conveniently located next door and on the beach. The Kellogg family, who’ve owned the La Jolla Beach and Tennis Club since 1935, built the hotel in 1970. We wanted to keep it easy and had never been to the “Shores” – as the locals refer to it, so we reserved a room there through Hotels.com. 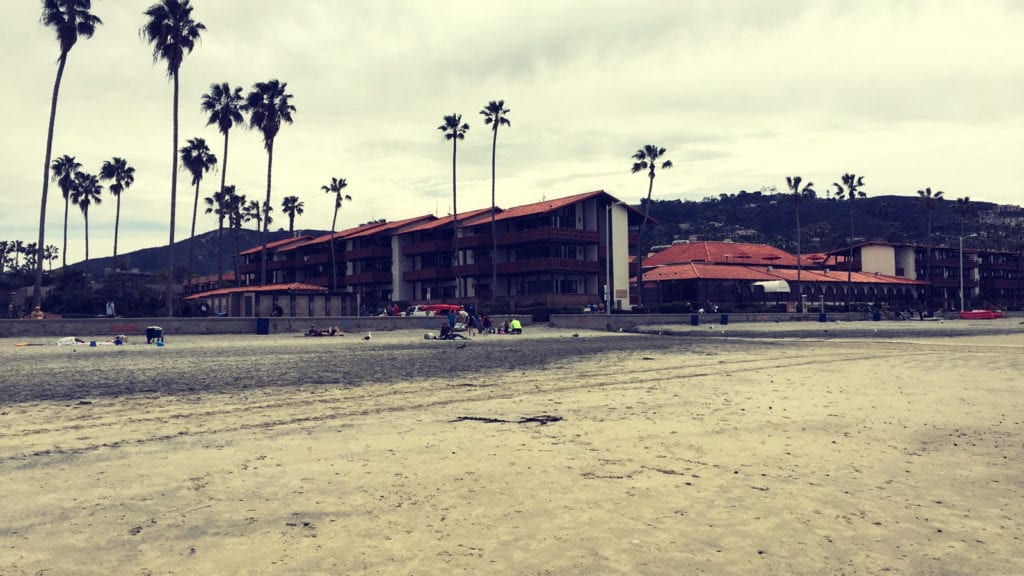 Getting to La Jolla

We drove south on the 101 followed by the 405 from Los Angeles on a Friday, which can bring terror into the hearts of seasoned freeway travelers. We managed to avoid complete gridlock by pulling our boys from school at lunchtime and driving as fast as regulations allowed past LAX, Long Beach, and into Orange County when we ran out of snacks and our Harry Potter DVD was no longer working to suppress the growing mutiny from the backseat. Minus our lunchtime, it took about three hours.

Our room was on the ground floor of the north side of the Aztec-inspired building with red tiles covering the roof and spacious arches connecting the patchwork of open-air courtyards. We had a balcony view of the generous sandy beach before us and Kellogg Park, seven acres of pristine beachfront playground, donated to the city of San Diego by Florence Scripps Kellogg, beside us. We would see black-clad scuba divers buzzing around the park in various states of preparedness in the mornings, voluminous tanks strapped on backs or waiting on the grass. 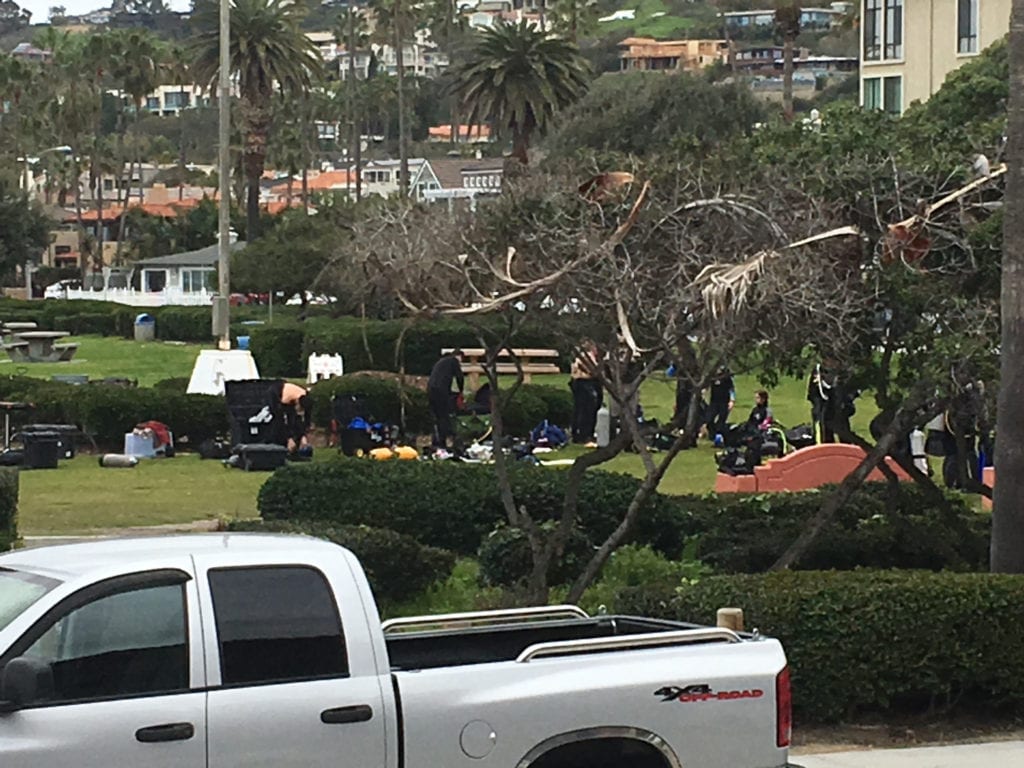 After rushing into each other’s arms, the kids jumped into the pool and we adults only managed to get them out for dinner with promises of a hot tub dip when we returned. 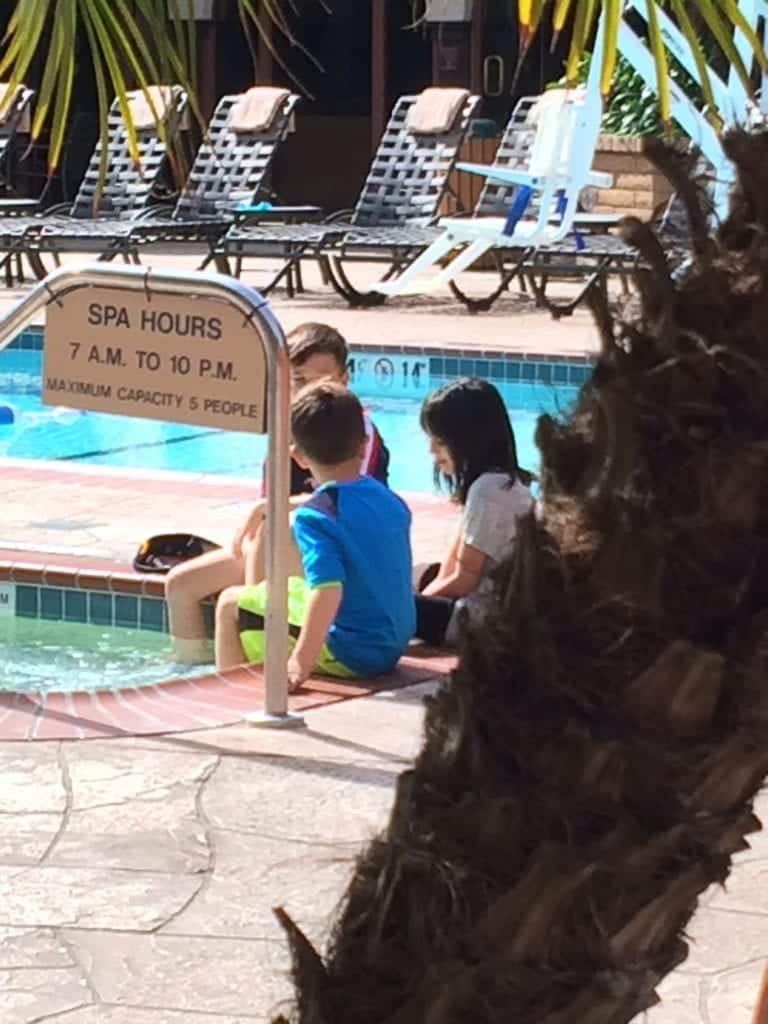 We asked the front desk for a family-friendly restaurant recommendation and they told us about Galaxy Taco, within walking distance. The streets around the hotel are in disarray with construction so it’s best to walk around, plus you get the benefit of the crisp ocean air and getting the wiggles out of your littles. We didn’t make reservations, so the only table available for immediate seating was outside. We passed a few festively clad skeletons celebrating Dia de Los Muertos, Mexico’s Day of the Dead holiday, beneath some bright, multi-hued plastic flags. The hostess seated us around a long table, anchored with heat lamps casting a reassuring warmth. 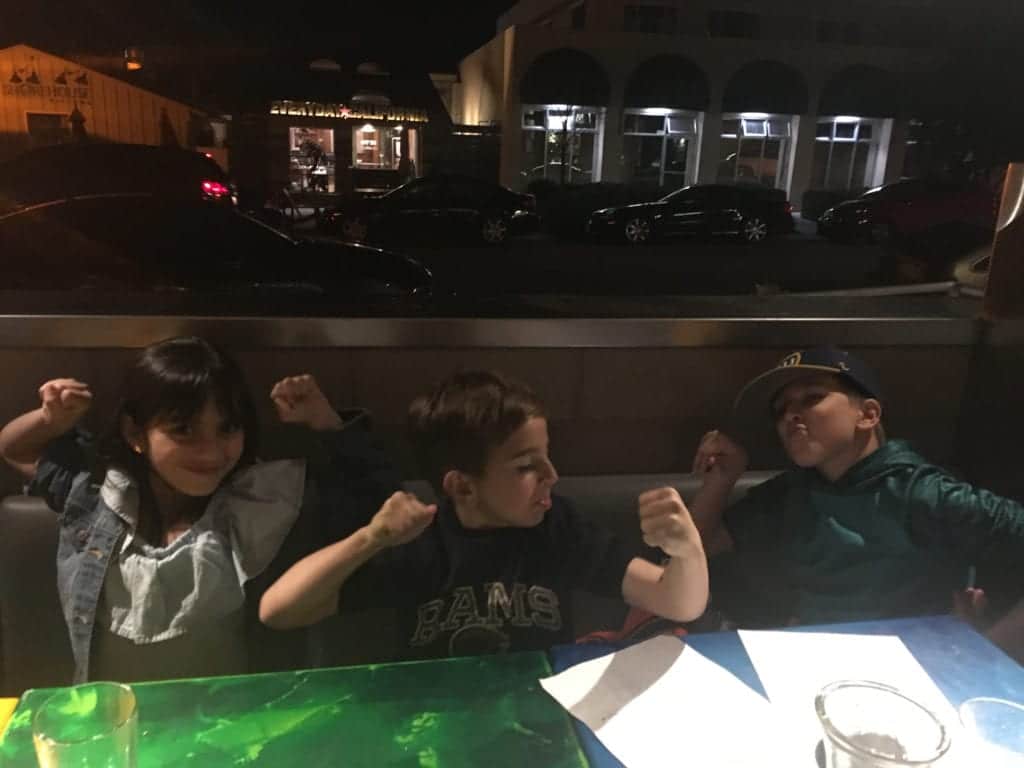 Then, the waitress, unbidden, brought blankets, just in case. 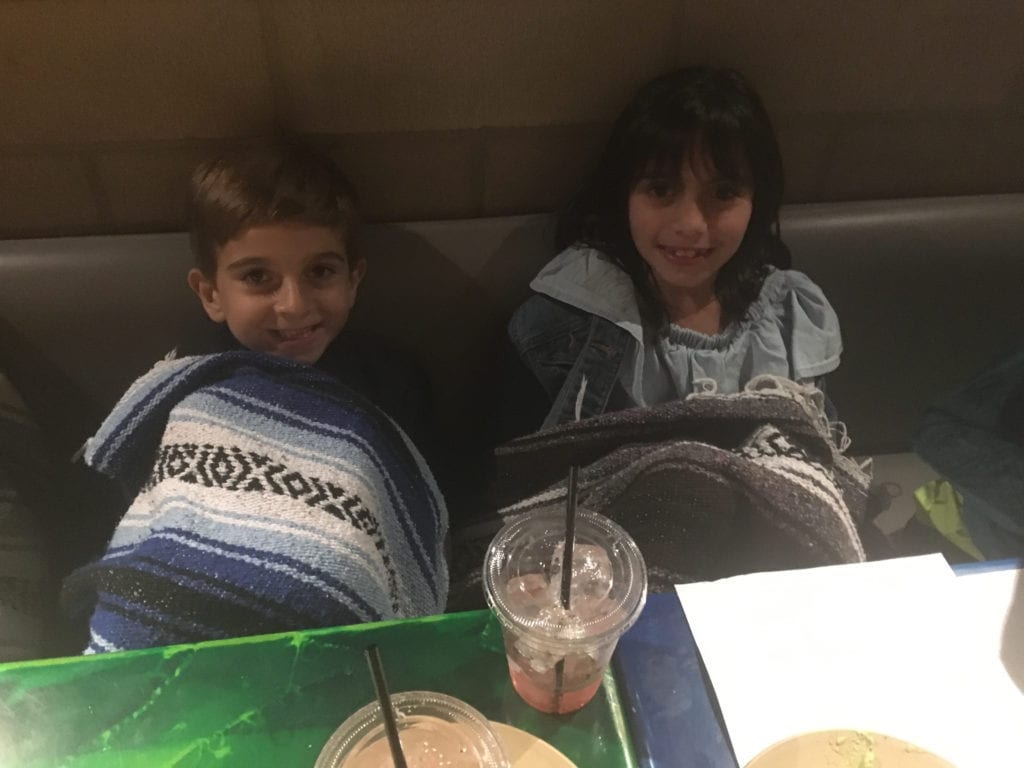 The food was a marvel. Fresh combinations of complex flavors for the adults and healthy, simple staples for the kiddos. The tortillas were a wonder, fresh and warm. Definitely worth the carb calories. The drinks were creative and a great welcome after our freeway drive. We eat a lot of fish so the first thing I ask is if it’s farmed or wild, as farmed fish are raised in ways that can be unhealthy. We were delighted to find the owner and chef, Trey Foshee, who is known around San Diego for being a pioneer in using organic, local ingredients and sustainable fish. The kids finished off the night squeezing into the promised hot tub with some college tennis players who suddenly realized they were much more tired than they had thought and emptied the steaming water one at a time.

La Jolla Shores Hotel has two great restaurants, The Shores and The Marine Room, one casual the other upscale. They have a great breakfast buffet at The Shores, which the kids dove into the next morning, while the mommies tried to appear healthy with their Green Goddess smoothies and Spa Omelets. Ocean views wrapped themselves around the restaurant through Panoramic windows. Beach life photographs, by local artist Andy Rice, were breathtaking in their simplicity. 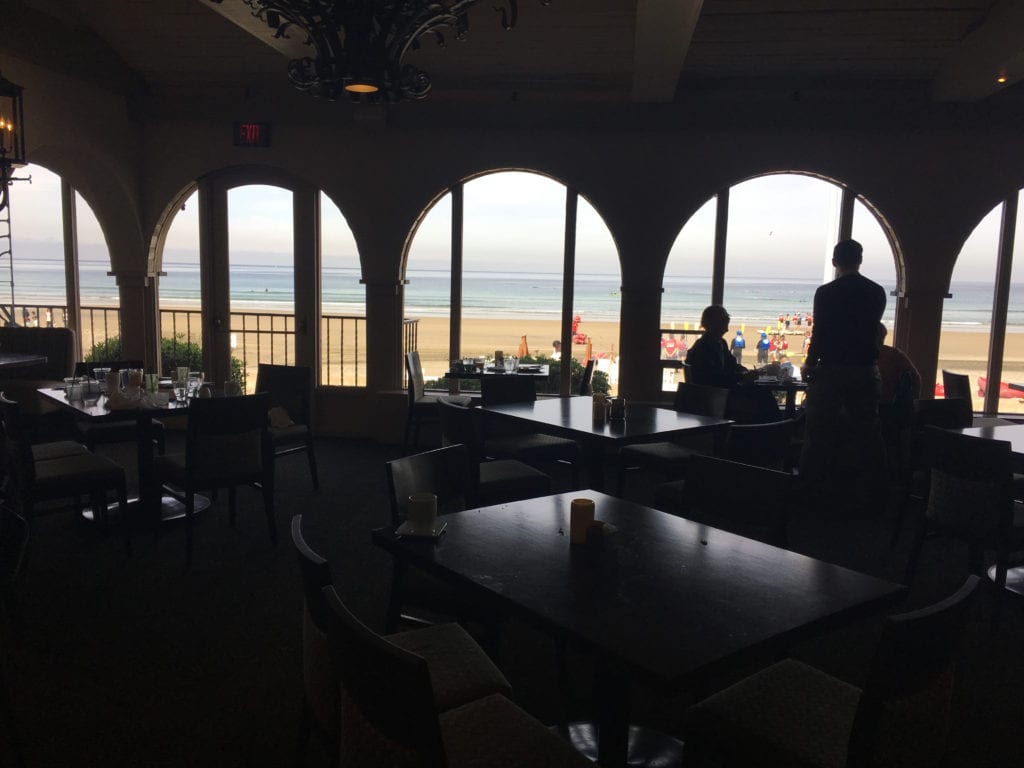 a room with many views

Outside, we saw groups of people surfing, snorkeling, scuba diving, and even kayaking, as the “Shores” is the only beach in San Diego that is designated as a boat launch. We, however, opted to eschew these normally enticing activities, even ignoring the proximity of options like Sea World and Legoland. Instead, we opted for the simple pleasure of walking along the sand to nearby Scripps Pier. Water exploded beneath running feet and we took frequent pauses to investigate various pockets of sandy interest. 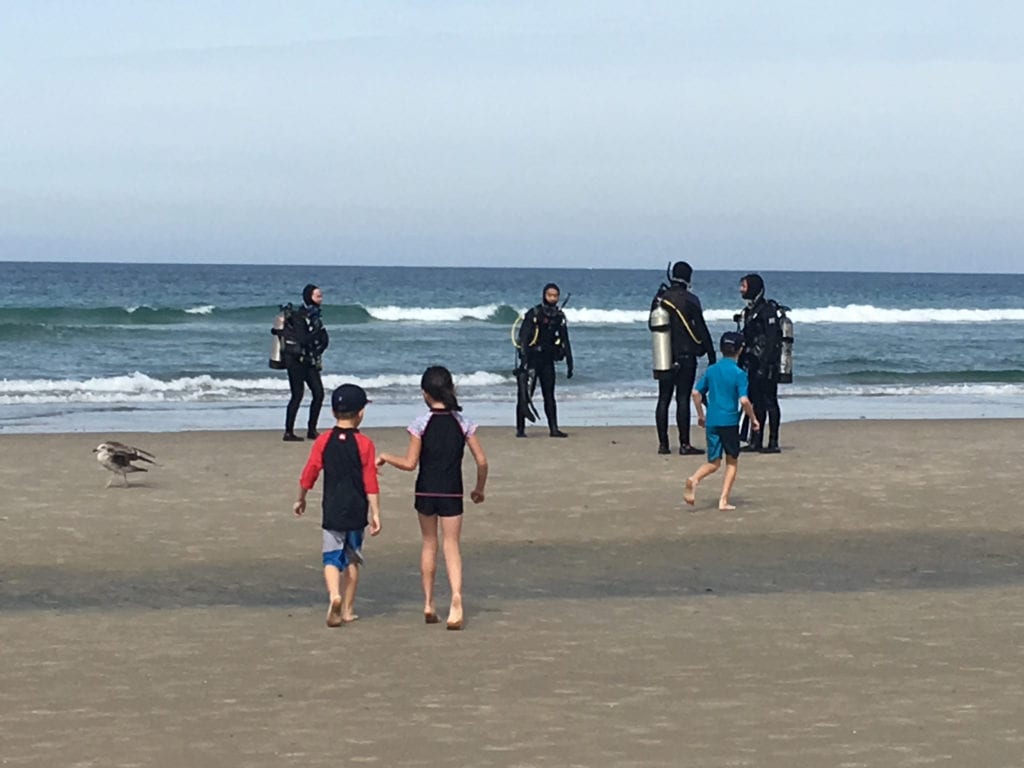 life with no distractions 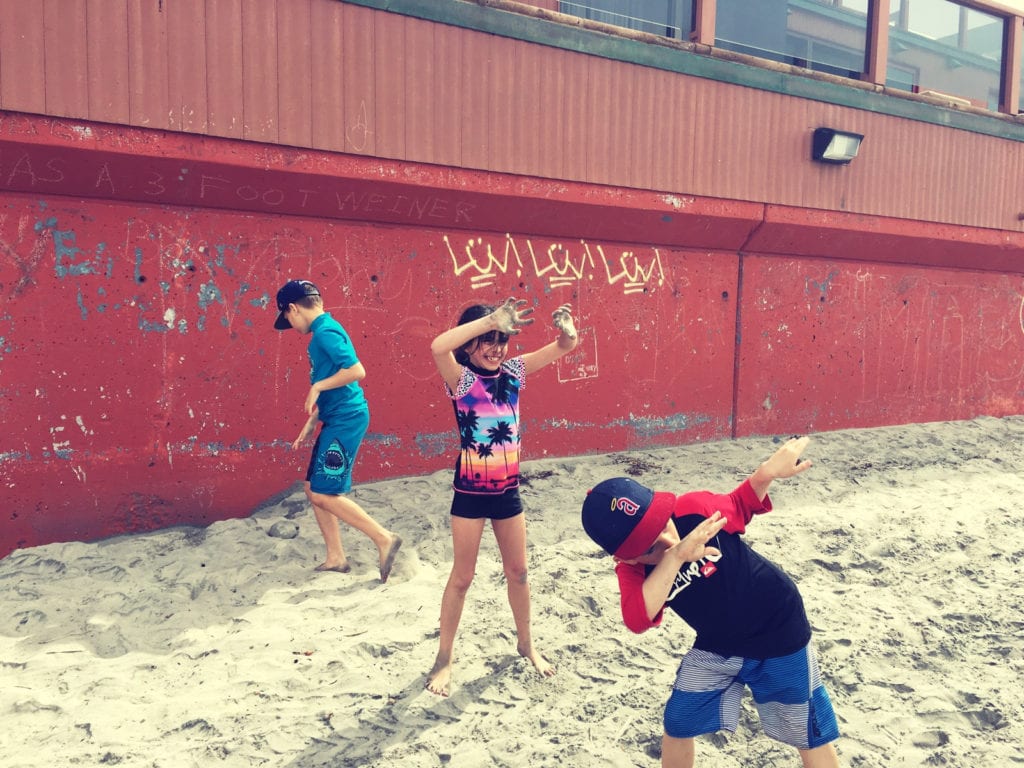 An impromptu soccer game materialized on the way back, lines drawn in the sand, cones serving as goalie posts, little legs fighting for victory. Sometimes the smallest things are the biggest things in life. 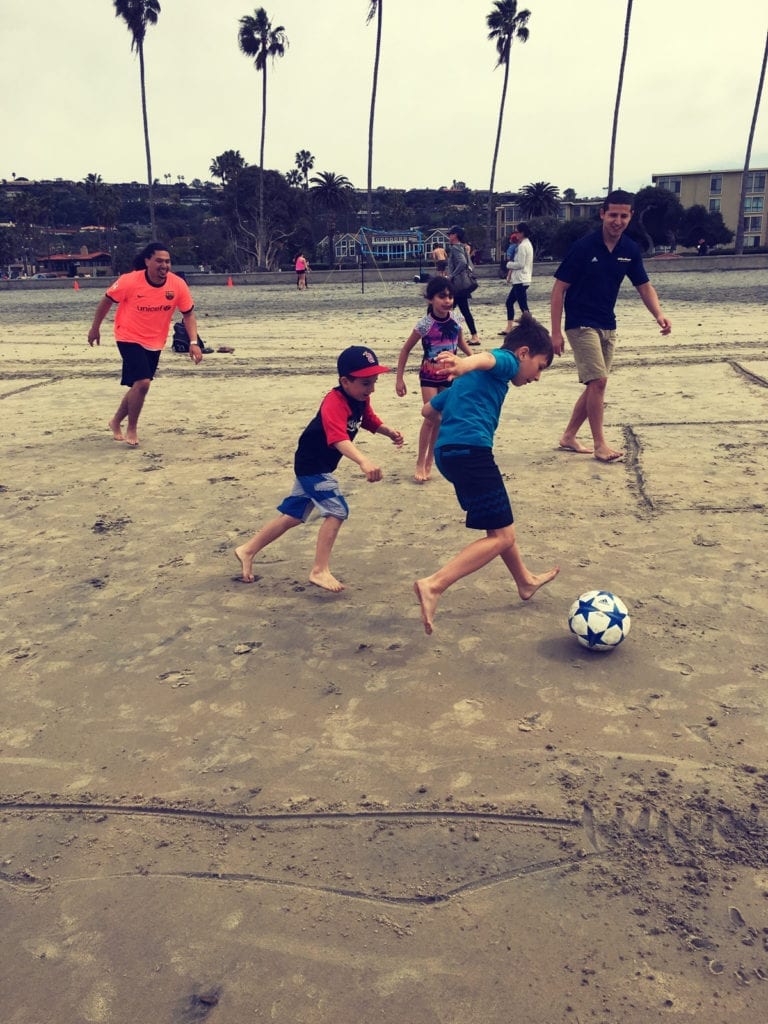 When the biggest things are the smallest things

Later, we all went to lunch at a place recommended by a local who said we couldn’t leave the San Diego area without eating at Board and Brew in Del Mar. Not knowing what to expect, I dressed in an upscale, Del Mar appropriate day outfit, sassy pumps included, and was surprised to find a super low-key, order at the counter, shack-like deli as our destination. The sandwiches made up for my initial confusion and it was another carb-worthy experience.

Fun things to do with kids in La Jolla Shores, California without amusement parks. Joyful weekend activities for kids and adults. 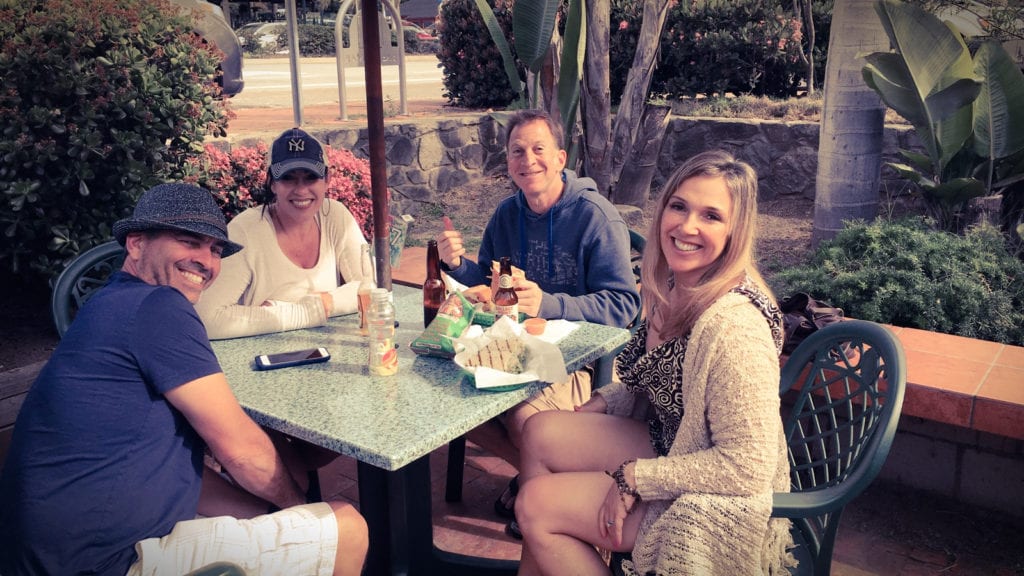 Steiny took us to the world-famous La Jolla Beach and Tennis Club after lunch and the kids got to see the Michigan tennis team in action. Several tournaments are still held there yearly, including the Hard Court Tennis Championships and the Grandfather-Grandson Tennis Championships. 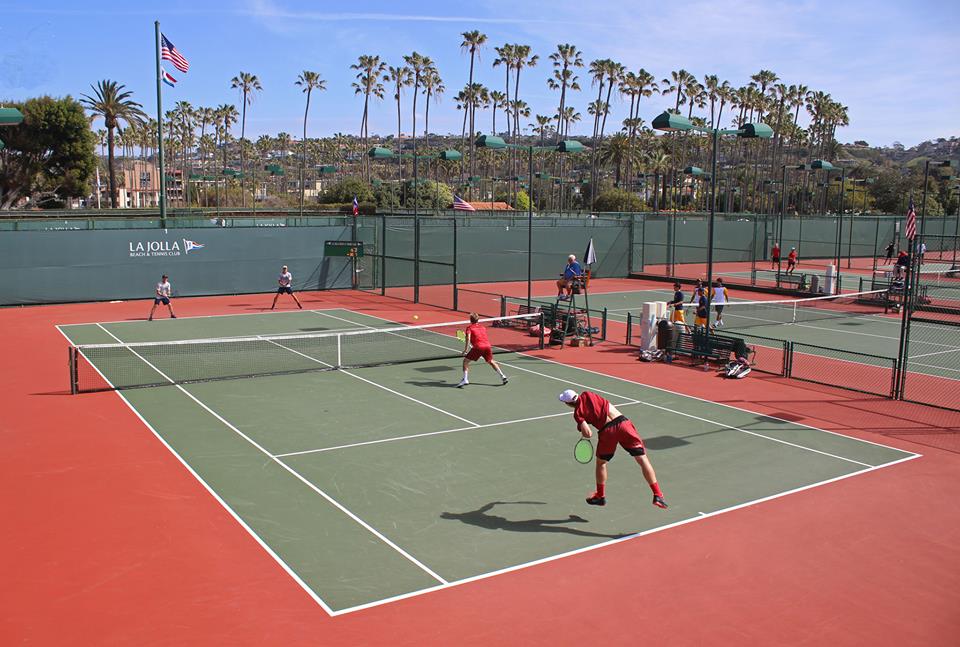 DON’T MISS! Sacramento: Best Things to Do With Kids in California’s Capital

Walking around the adobe-colored walls, which bordered portions of the individual courts, we found our way to the 9-hole pitch and putt, behind the courts, where our future golf champions showed off their stuff.

That night, the front desk provided us with the number of a reputable sitter service so the parents could get out for an adult dinner. We chose The Hake based on their great Yelp reviews. We were greeted with an open, modern layout and enough shadows and wood to make it feel like a night out. We settled at a high, round cocktail table so we were able to speak closely and share a variety of dishes. We enjoyed the grilled octopus, wild tuna carnitas, beet, and asparagus salad. Then we shared the Seared Opah and the Mussel with the Daily Catch, plus all the side dishes because the portions were on the smaller side and for some reason, even though there were four of us, the sharable plates came in pieces of 3 or 5. The drinks were excellent though, with alcohol varieties I’d never heard of, which were patiently explained by our waiter, who was also more than happy to modify any existing dish to our specifications. 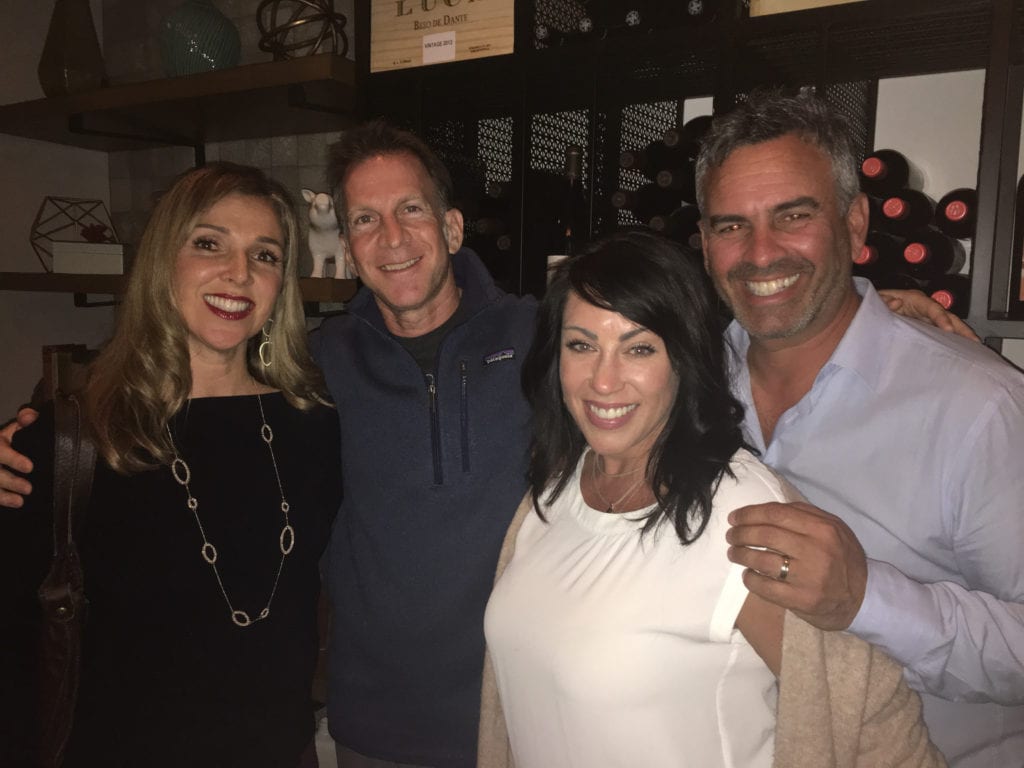 When we came back, all was quiet in our hotel room and the sitter had a report card for each child and the marks were great, which was pleasant to hear and made me wish she lived closer. When it was time to leave, we were so glad to have made the trip. Even with FaceTime, there’s nothing like facetime. Little Mia had lost some of her little since we’d seen her last but the kids didn’t miss a beat and melted into each other like no time had passed. San Diego is one of our favorite cities and we loved chilling in La Jolla but the company is what made our visit unforgettable. 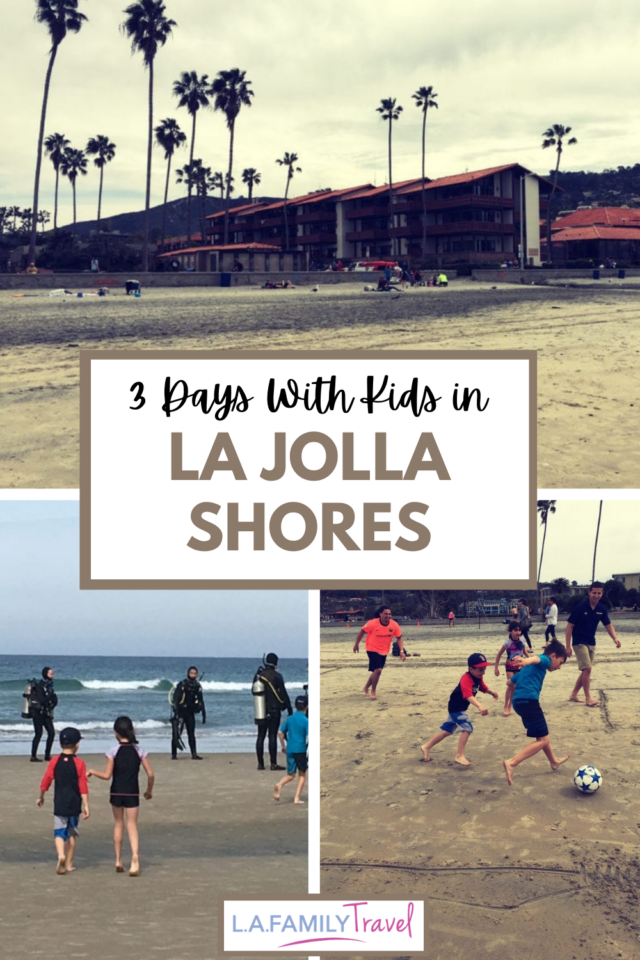