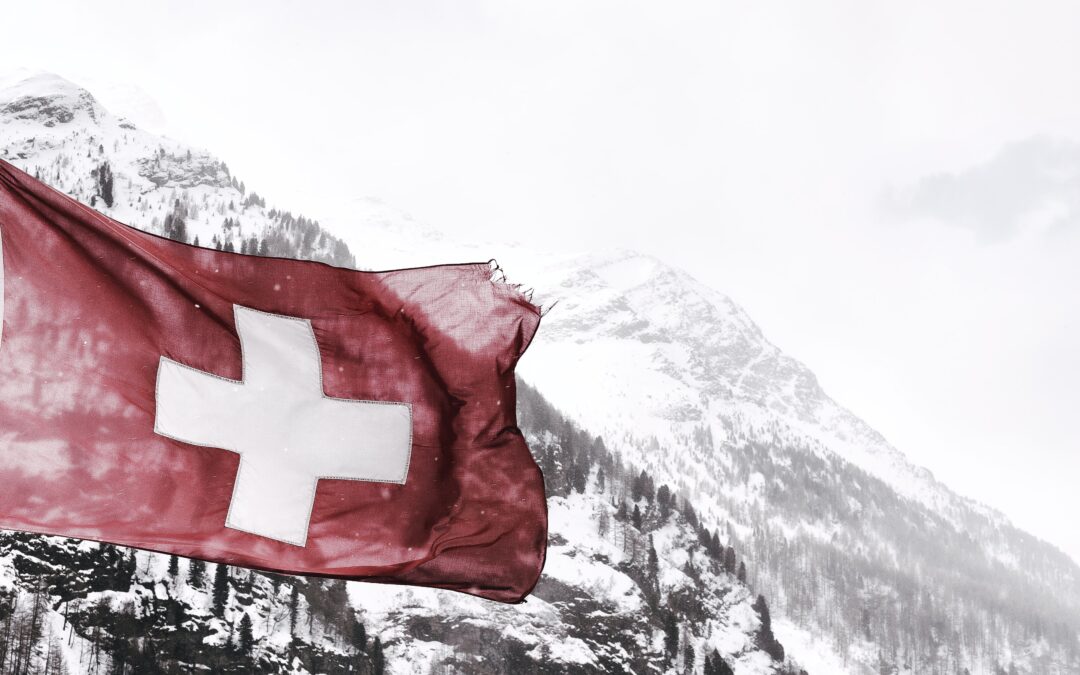 As a kid, my dad traveled a lot for work, catching flights to far flung destinations like Japan, Germany, and Italy.  I thought it sounded so glamorous.  I remember asking him once what his favorite city in the world was.  Zurich, he said.  And he promised he'd take me sometime.

We made that trip to Zurich, Switzerland a couple years later on a family vacation and I could instantly tell why he loved it so much.  It had that city energy but was also very casual and laid back.  It was perhaps one of the cleanest cities I'd ever been to.  It had cobbled side streets and alleyways that were tight and winding, easy to get lost in as I did a couple times, but I enjoyed it.  And being smack in the middle of Europe, the food scene was a foodie's dream - traditional Swiss, upscale French, rich German, and classic Italian.  Its central locale also afforded us the opportunity to take several day trips to different parts of Switzerland, as well as day trips to Paris, Milan, and Innsbruck, Austria.

Years later, I managed to con my husband into taking me back.  He had been wanting to see this beautiful city that I'd talked about so much, so we made the trip for New Year's.  He fell in love with it as well.

If you're planning a trip to Europe and wondering what cities to visit, Zurich is absolutely one you can't miss.  Perfect for a slow down after visiting busy Paris or crazy Munich, here is the best list for all the relaxing things to do in this vibrant city. 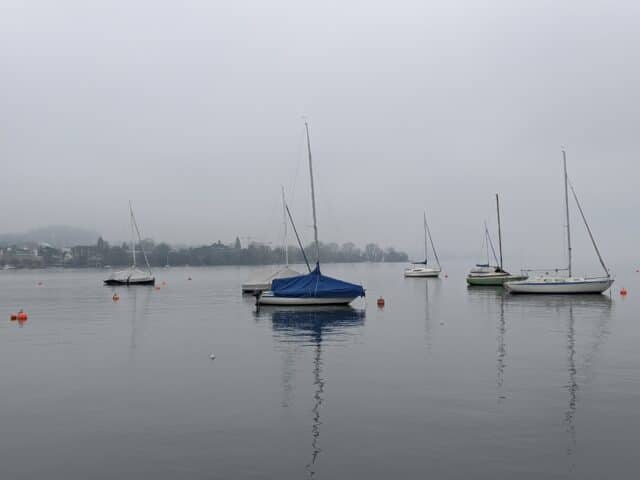 Even foggy, Lake Zurich is beautiful.

The eponymous Lake Zurich is absolutely beautiful.  I've always visited Zurich in early winter, so the air is crisp, but not unbearable (at least not for us Chicago folk who have adapted to sub zero temperatures like polar bears) and the lake itself is quiet, but the lakefront is bopping with cyclists and food vendors and people out for a post holiday stroll.  I can only imagine what it looks like in the height of summer, full of sailboats and sunbathers.  If you walk far enough south, you'll hit the Arboretum Zurich, which, like everything else in Zurich, is perfectly pristine even in winter.

And if you think walking around a lake sounds boring, there's always the chance you'll come across one lone swimmer who has decided to take his laps in 30 degree weather with nothing but his underwear on.  It sounds painful and certainly looked painful, but much to my family's amusement, he actually seemed to be enjoying it.

Visit the Library at University 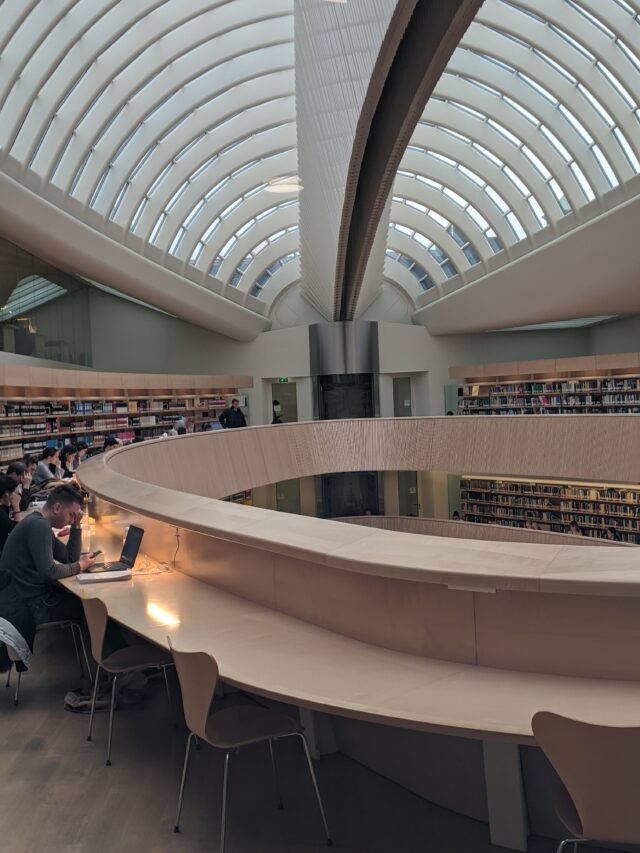 If you've read any of my previous articles, you know I typically include some sort of book attraction in my lists - be it library or bookstore.  I make it a point to find the best spots for books no matter where I go.

In Zurich, there are several little bookstores that are absolutely charming, including Never Stop Reading, which was bright and welcoming and one of my favorites (not to mention it had a shop name I could totally get behind).

But, I think the most unique experience was visiting the library at Universität Zürich, also known as Rechtswissenschaftliche Bibliothek, but let's be honest - who can read that, let alone pronounce it?  I'll be upfront and say that this isn't really an entertaining thrill for kids.  It is a working library and is typically full of students studying, so whisper voices are kind of required.  But if you've got kids who are into architecture or books, this is definitely a must see.  The library itself is very modern and breath-taking on the inside, but it's also fun to see the Universität Zürich campus.  Perched high on a hill, it too offers some pretty great views of the city.

Kick it around at the FIFA World Football Museum

Got a soccer fan - or any kind of sports fan, for that matter - on your hands?  Then a stop at the FIFA World Football Museum is a must. It's got a little something for everyone.  History buff?  They have an entire exhibit dedicated to the history of football. Fierce competitor who always has to win?  Peep the World Cup Trophy in its new gallery.  Energetic and amped kids?  Head to their gaming zone to burn off some energy.  Mom who's maxed out on football?  There is a bar… And a library.

The museum itself was built in 2016, so it's very modern and interactive.  And the added bonus is its proximity to the city center, located only a few blocks west of the Arboretum. 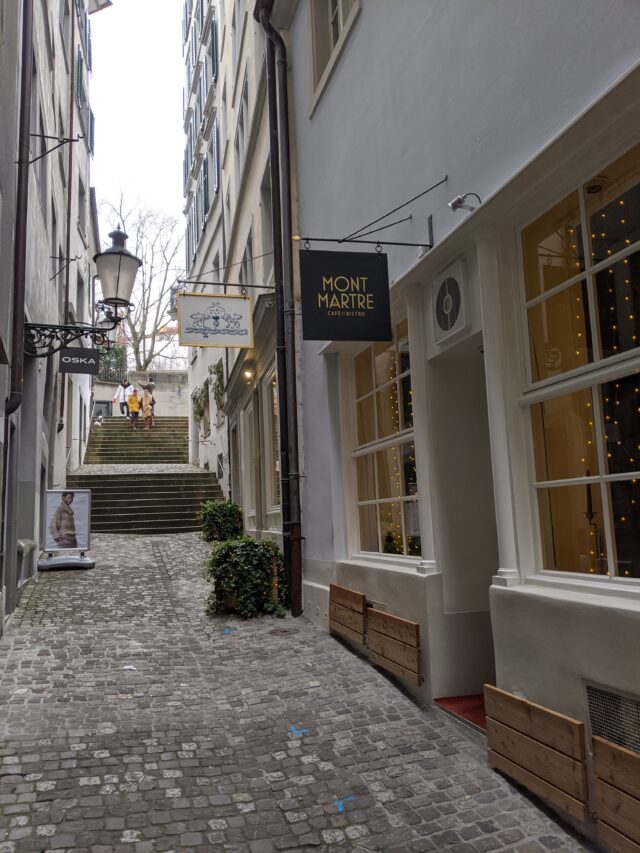 If only all alleys were this picturesque.

Zurich is hands down the most charming and quaint big city that I've ever been to.  Old Town Zurich, which is the area of Zurich right along the river, reminded us of things we see in some of those old school fairy tales.  The streets are cobbled and tight with stone and tudor style buildings rising up on both sides.  And they wind and bend and lead to even tighter alleys and back streets that lead to stairs that you just have to go up because you never know what you'll find when you reach the top.

Though many of the storefronts have been modernized in recent years, boasting well known brands like Lululemon and H&M, if you're willing to explore off the beaten path a little bit, you'll find some picturesque boutique shops and sidewalk cafes, perfect for casual browsing on a slow afternoon.

Go Play Chess at the Lindenhof 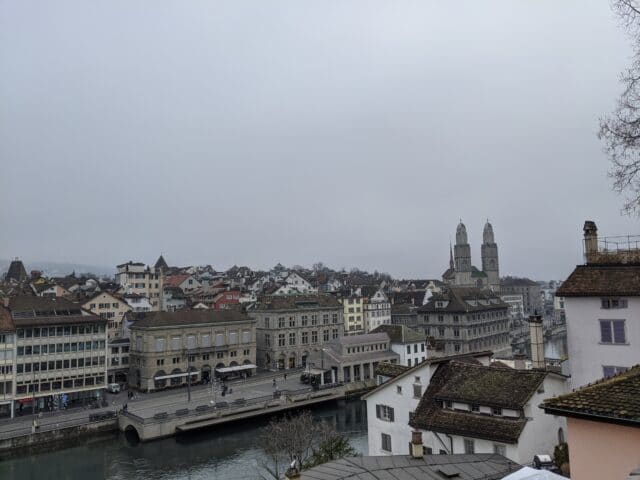 Perched atop a hill on the west side of the Limmat River, right in the heart of the city, is a quaint little park called the Lindenhof that you might miss if you didn't know it was there.  It's the kind of place locals escape to on a sunny afternoon with a good book or a newspaper, or just to have a coffee and catch up with friends.  There are also chess boards for a friendly game, if you happen to find one that isn't occupied.

If you cross the Fortunagasse, you'll see a small doorway that gave me major Secret Garden vibes.  Walk through it and it spits you out onto an extension of the park, with a short walking trail and much to my family's delight, a little playground with swings and a slide.

But the greatest thing about this park is undoubtedly the view. Built on top of an old Roman rampart, the park offers a bird's eye perspective of Old Town Zurich and the river.  Perfect for a family shot or two.

Don't Miss! The Most Family Fun You Could Have at Winter Carnaval and Quebec City

If you go to Zurich and don't sample the fabulous Swiss food, did you even really go?  As major foodies, my family and I always look up the food scene in a locale, typically right after (or sometimes even before) we book our flights and hotel.

If you go to Zurich and don't sample the fabulous Swiss food, did you even really go?

Zurich is a proverbial melting pot of European cuisine, with influences from France, Italy, Germany, and even Spain readily accessible.  But you owe it to yourself to try the foods the Swiss themselves are known for.  Namely their chocolates and fondue.  And let's be honest.  Who among us doesn't love chocolate and fondue?

If you're looking for chocolate served in a fun and unique atmosphere, you absolutely have to stop at Cafe 1842 in the Haus Conditorei Schoeber.  Step inside and you're instantly transported to a classic turn of the century cafe, full of chocolates, expertly crafted tarts and pastries, and delicious coffees and teas.  For a kid, it's nothing short of magical, especially around the holidays when everything is decorated and the whole store looks like Santa's workshop.  It's a busy little place, so expect a bit of a wait if you want to sit down.  But it's absolutely worth it.

And for the ultimate Swiss fondue experience, look no further than Swiss Chuchi, a casual but authentic spot in Old Town that is located in the Adler Hotel.  They offer street dining as well, perfect for people watching, weather permitting.  As an interactive dining experience, fondue is always a fun dinner option for kids, but be mindful that dishes are often served over an open flame.

Climb to the top of Grossmunster 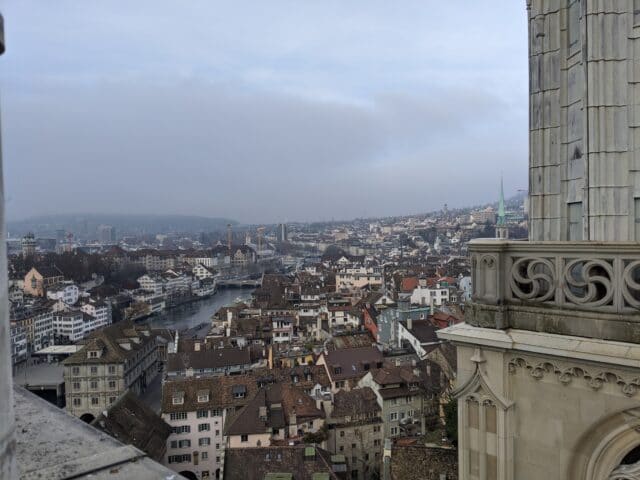 View from the top of the Grossmunster Spire.

When you look at pictures of Old Town Zurich, there's typically a very distinguishing factor to its modest skyline - the dual towers of Grossmunster, a Protestant church in the heart of the city.  The towers themselves were erected in the late 1400s, but the church dates back to the 1100s, which seems inconceivable given the immaculate condition in which it still stands.

The Romanesque interior is nothing short of stunning, with stained glass windows and a giant pipe organ at its heart.  You're also allowed to climb to the top of one of the towers for a truly fantastic view.  Be forewarned, though - having been originally erected in the late 1400s, the ascent up the tower is at first very tight.  Like two people can barely squeeze in the winding staircase at one time kind of tight.  And then once you make it past the staircase, the rest of the ascent up is on wooden ladders.

Is it worth the trek?  Absolutely.  But for someone with mild claustrophobia like myself, your heart will be racing the whole way up.  And while it's likely a breeze for older kids, it might be a struggle for little legs.

Most major international airlines fly from L.A. to Zurich, though we personally love SWISS Air and Lufthansa.  We think their airplane food is slightly superior (though it's not a very high bar we're using to compare).

For the best places to stay, Hotel Hirschen is ideal for travelers looking for something that is nice and convenient, but also doesn't break the bank.  It's centrally located in the city and also features a charming little wine bar.  On our latest trip, we stayed at the Marktgasse, a contemporary yet quaint hotel just off the river.  Their rooms were cozy and well-appointed, and we loved the cafe that was right next door.  Perfect for a quick morning muesli and espresso before sightseeing.  For a truly upscale experience, we recommend the Storchen Zurich, a luxury hotel on the river that is easily one of the most stunning hotels we've ever stayed in and offers a traditional Swiss breakfast that simply can't be beat.

When it comes to European cities, few have the laid back, casual atmosphere that Zurich affords.  It's perfect for families that love to explore at their own pace, and we can't recommend it enough!