The Top 7 Space Destinations for Families 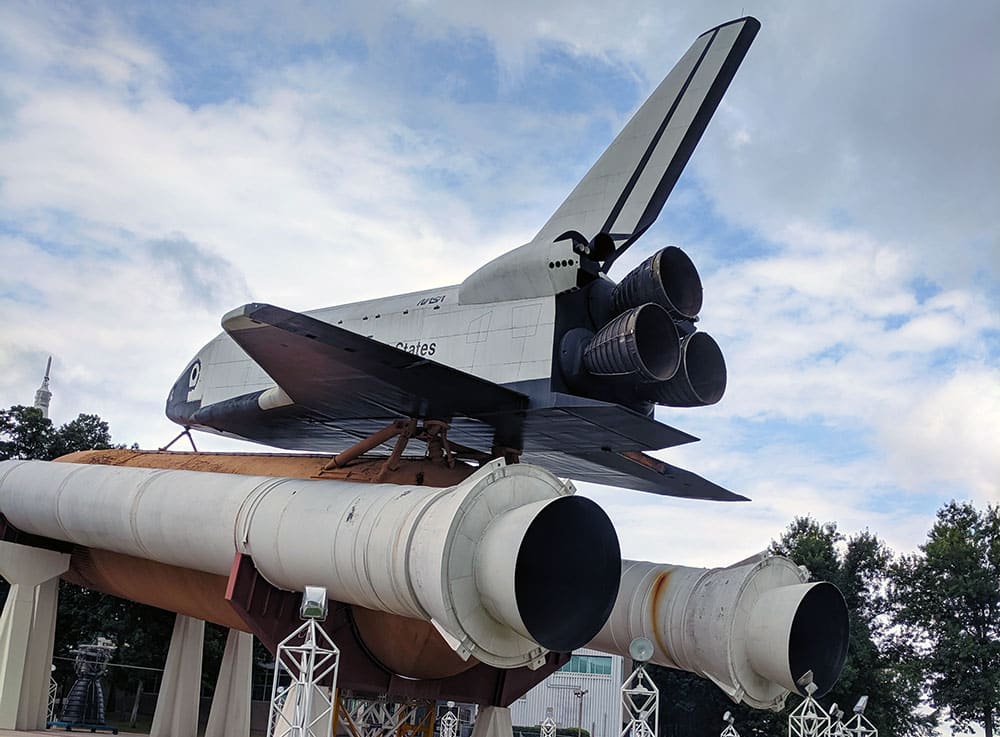 Most kids act like space cadets at some point, but some have caught the space craze. After all, kids love stories about space. Over the last few months, my boys have eagerly watched coverage of rocket launches and spaceship tests. For kids, astronauts heading to the International Space Station on the Falcon 9 rocket is the coolest thing to see. With the addition of NASA’s Artemis moon program plus future missions to Mars, now is a great time to be a space fan.

For families like mine, with space-loving kids, there are space attractions across the U.S. to give you hands-on, behind-the-scenes looks at NASA headquarters, space shuttles, rocket launches, and more. If you’re looking for where to take kids who love space or want to plan the perfect vacation for space lovers, keep reading for our guide to these essential space places to visit.

Contents hide
1 U.S. Space and Rocket Center
2 Space Center Houston
3 Kennedy Space Center
4 Where Can You See More?
4.1 The Space Shuttle Tour
4.2 The Air & Space Museum in D.C
4.3 The Cosmosphere in Kansas
4.4 The Museum of Flight in Seattle 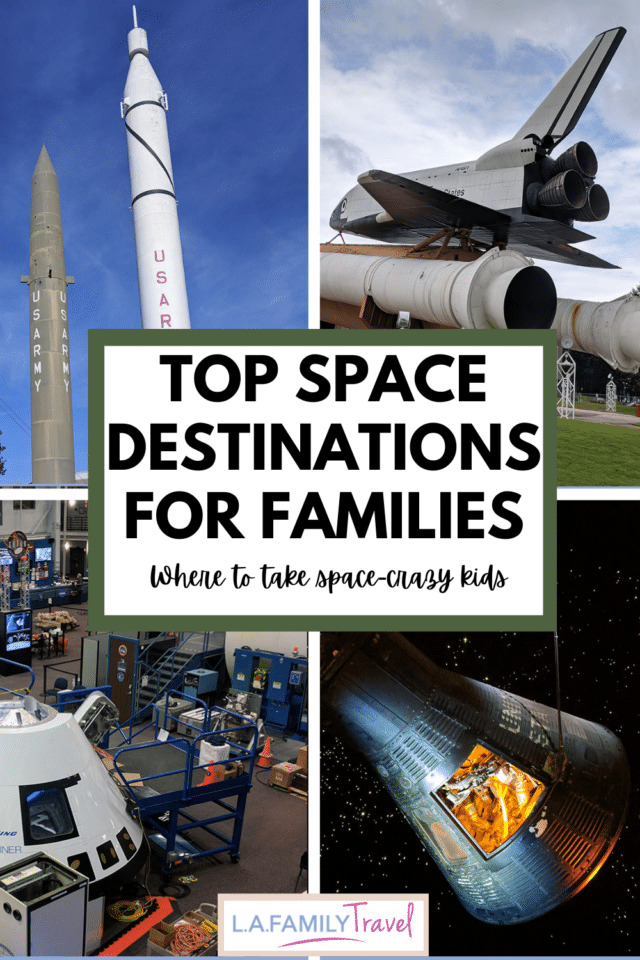 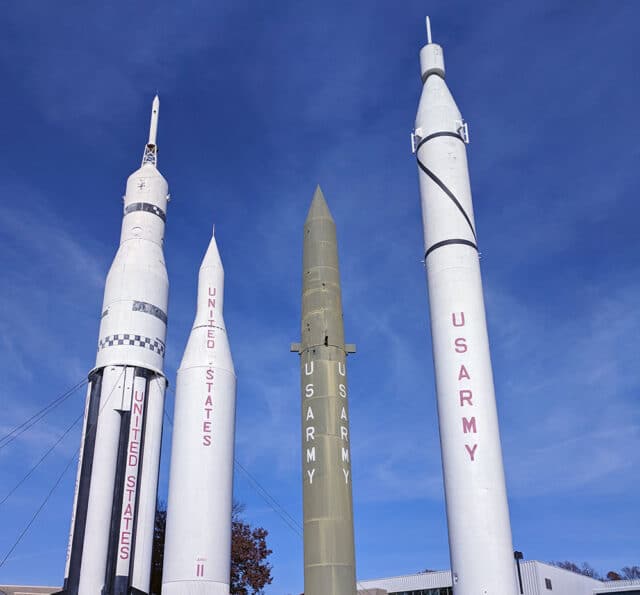 Many space museums have “rocket gardens,” where rockets are displayed outside for visitors to enjoy. Photo by Christy Nicholson.

The U.S. Space and Rocket Center in Huntsville, Alabama, is the home of the legendary Space Camp. But that’s not all that you’ll find. A stunning outdoor display of rockets, a recreation of the International Space Station, and a full-size Saturn V rocket are highlights of this destination. The U.S. Space and Rocket Center is friendly for both little kids and teens; there are centrifuge and moon shot rides for the daring, and the younger crowd can play at the on-site playground. The climbing wall is a big hit with my preteen boys. In fact, this is their favorite space center in the entire U.S. If you have extra time, schedule a Shuttle Experience. Got a whole weekend free? Sign up for Family Astronaut Training.

Don’t Miss: For an extra $20 per person, take a bus tour of the Marshall Space Flight Center to see propulsion laboratories, rocket test stands, and the science command center for the International Space Station.

Where to Stay: The U.S. Space and Rocket Center offers an onsite RV park. The Huntsville Marriott also is on the grounds of the Space Center, while the Hilton Garden Inn and Drury Inn are less than a mile away. For a unique experience, stay in a 1930s cabin at Monte Sano State Park.

You can read reviews of local hotels on TripAdvisor!

Getting There: The Huntsville International Airport is served by United Airlines, American Airlines, and Delta, but there are no non-stop flights from L.A. Huntsville is two-hour drive from Nashville, Tennessee, and an hour-and-a-half drive from Birmingham, Alabama. 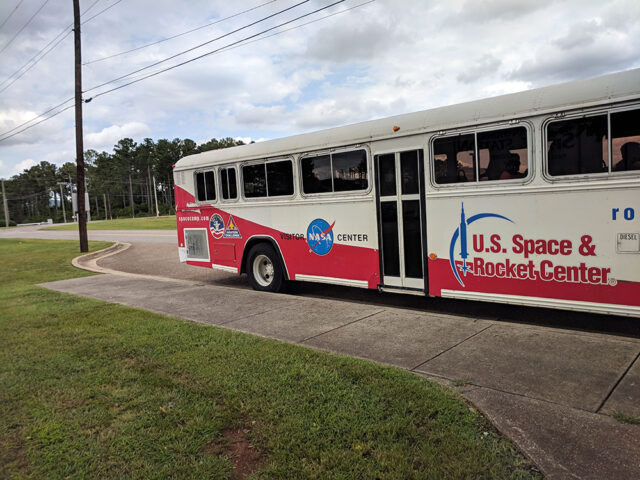 The past meets the future at Space Center Houston, where you can tour the Apollo-era Mission Control Center and see a Falcon 9 rocket like what was used for this year’s Crew Dragon launches. The center also is the home of the world’s largest collection of moon rocks, housed in a giant vault. Admission to Space Center Houston includes free tours of Johnson Space Center, where you can see an astronaut training facility and observe the modern Mission Control in action. Aspiring rocket engineers will love touring the replica space shuttle Independence mounted on a carrier aircraft — my oldest son says this was his favorite part of our visit. The upper floor of Space Center Houston features Kids’ Space Place, with simulators, games, and a giant slide.

Don’t Miss: Every Friday and Saturday, an astronaut visits Space Center Houston to share memories of their missions with guests. For an extra fee, you can join the astronaut for lunch and a Q&A session.

Where to Stay: The Hilton Houston, Courtyard by Marriott, Homewood Suites, and La Quinta are some of the closest hotels to Space Center Houston. For a beach view, head 30 minutes southeast to a vacation rental in Galveston.

Getting There: Houston Hobby is the closest airport to Space Center Houston and is served by American Airlines, Delta, Southwest, and Allegiant. George Bush Intercontinental Airport also is in Houston, but I don’t recommend it due to its distance from the Space Center.

Check Out: 7 Essential Stops on a Texas Road Trip 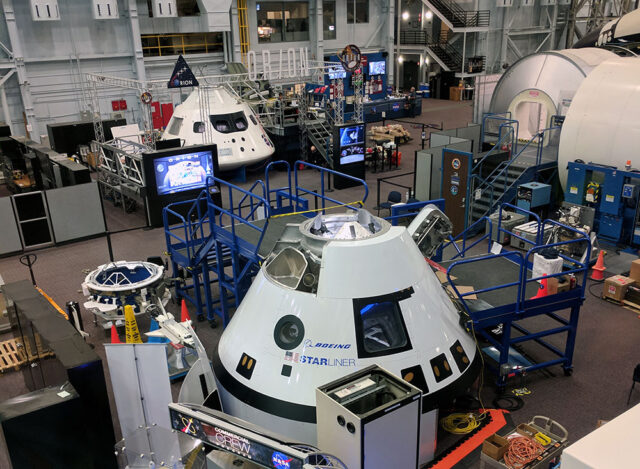 Take the tram tour at Space Center Houston to see the vehicle mockup facility, where the spacecraft of the future are tested and designed. Warning: visiting may result in cardboard spacecraft being built in your house. Photo by Christy Nicholson.

If you’re wondering where to watch a rocket launch, Kennedy Space Center is your best bet. When you visit, take a whole day to explore all the exhibits, including Space Shuttle Atlantis, the U.S. Astronaut Hall of Fame, models of future spacecraft, and touching memorials to Challenger and Apollo 1. Thrill seekers will want to try the Shuttle Launch Experience, while would-be pilots will love the astronaut training simulators. The Kennedy Space Center bus tour is free with admission and will take you past historic sites such as the vehicle assembly building and launchpad 39B. The bus tour also takes visitors to the Apollo/Saturn V Center where you can see the launch countdown clock, touch a moon rock, and experience an immersive recreation of a Saturn V rocket launch with sound and vibration effects (bonus: watch for alligators in the nearby water). In 2021, Kennedy Space Center will open Planet Play, an indoor playground for kids ages 2-12.

Don’t Miss:  A rocket launch is the must-see experience at Kennedy Space Center. Viewing the launch from the Main Visitor Center is included with admission and allows guests to view the rocket after it rises above the treeline. For an extra $20 per person, you can take a bus to the grandstands at the Apollo/Saturn V Center to view the rocket as it launches from the launchpad.  Be prepared for a long wait in the case of a weather delay.

Where to Stay: Several hotels are within just a few miles of Kennedy Space Center, including Hyatt Place Titusville, Best Western Space Shuttle Inn, and Hampton Inn Titusville. Nearby Cocoa Beach offers condo rentals such as Canaveral Towers. Walt Disney World and Universal Orlando are about an hour from Kennedy Space Center.

Pro-Tip: If seeing a rocket launch is your priority, keep a flexible schedule. Launches that are scrubbed (canceled) often are rescheduled just days later. 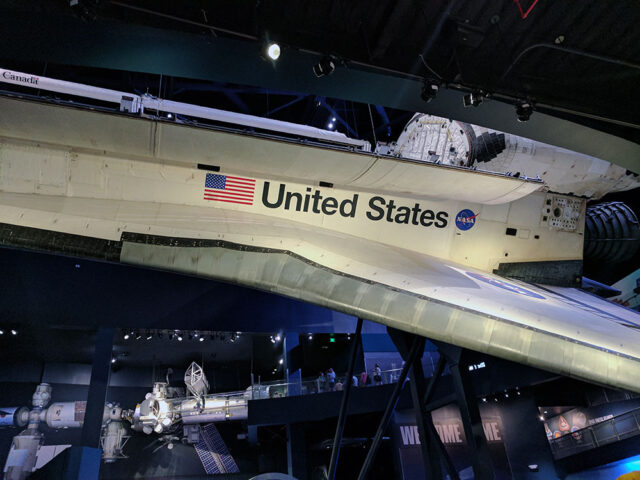 The display of Space Shuttle Atlantis at Kennedy Space Center is breathtaking, at least for space-crazy families like mine. Photo by Paul Nicholson.

If you’re looking for where to take kids who love space, there are attractions across the U.S. to give your family hands-on, behind-the-scenes looks at NASA headquarters, space shuttles, rocket launches, and more.

Where Can You See More?

It’s hard to beat the space centers, with their collection of NASA memorabilia and tours featuring retired astronauts and rocket engineers. However, there are science and space museums all across the country. Add these stops to your itinerary when you’re in the area:

You’ll see one shuttle at Kennedy Space Center. If you want to see the others, head to the Smithsonian’s Udvar-Hazy Center near Washington, D.C., and the California Science Center in L.A. Each shuttle is displayed in a different position: Endeavor is displayed in launch position, Atlantis is shown in flight, and Discovery is landing. Visit the U.S.S. Intrepid in New York City to see the Enterprise, the original test version of the shuttle.

The Air & Space Museum in D.C

The Cosmosphere in Kansas

The Cosmosphere is home to Mercury and Gemini spacecraft, German V-1 and V-2 rockets, and a Soviet Vostok capsule. The museum also features Dr. Goddard’s Lab, an interactive show about the history of rocket science.

The Museum of Flight in Seattle

The Museum of Flight has a Soyuz capsule that took astronauts to the International Space Station and a USSR-manufactured replica of Sputnik 1. The museum also features the NASA full fuselage trainer, a space shuttle mockup previously used for astronaut training.

Whether we’re watching a launch, touring a rocket garden, or peeking behind the scenes, our family comes home from our favorite space museums feeling inspired, hopeful, and full of dreams (and astronaut ice cream). If you’re ready for an adventure that is fun, educational, and out of this world, start planning your trip to the nearest space center — and beyond. 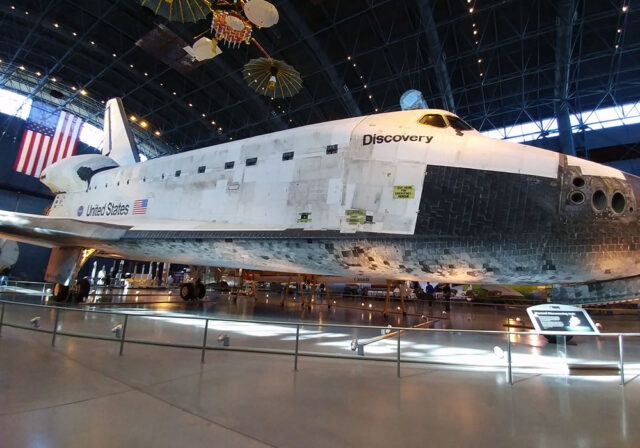 Space Shuttle Discovery is displayed at the Smithsonian’s Udvar-Hazy Center in Virginia. Thanks to small crowds and extra-friendly staff, this stop is one of the best ways to see a shuttle up close. (While you’re there, take the elevator to the top floor for a view of planes landing — a favorite for kids.) Photo by Paul Nicholson.

If you liked this article, please consider pinning or sharing it! 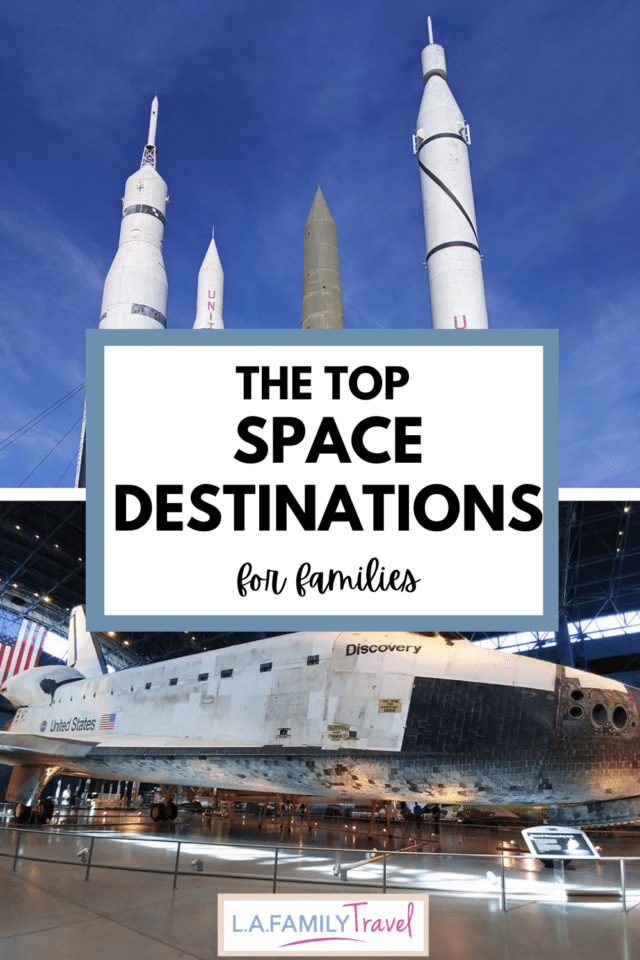