7 Can’t Miss Tips For Your African Safari With Family 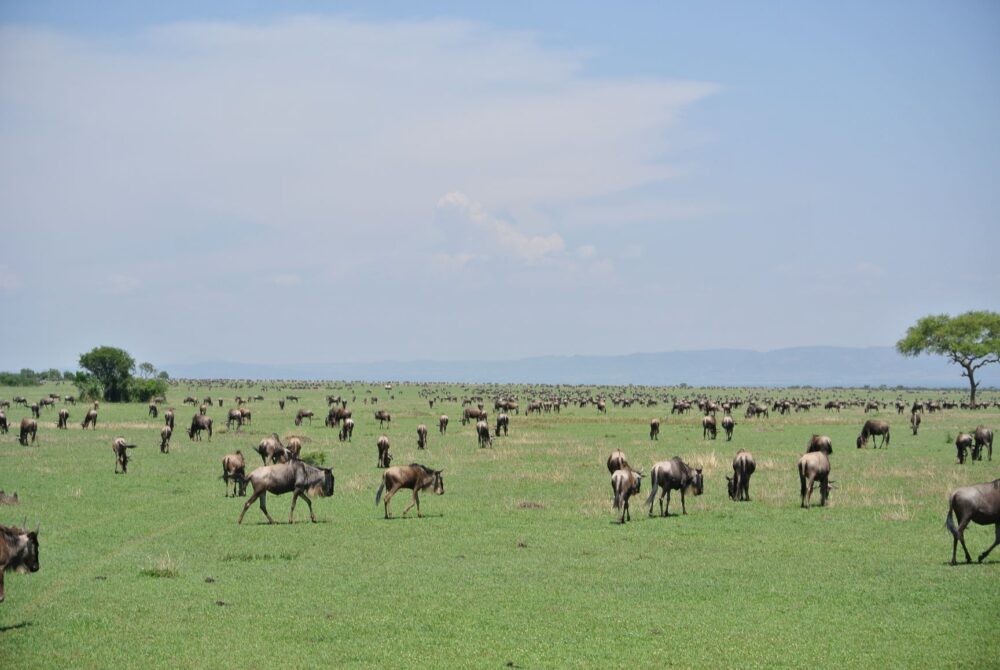 For our honeymoon, years back, we had decided to knock Safari in the Serengeti off our bucket lists.  It was a whirlwind two weeks, a day in Kilimanjaro, four days in the Serengeti, a week in Zanzibar, the best places to see animals (lions!) on an African Safari. Plus, a 24 hour layover there and back in Amsterdam.  But it was the most incredible travel experience I’ve ever had.

After being grounded during 2020, I’m especially nostalgic for our safari trip. When our family finally gets back to globetrotting, we won’t be putting off the rest of our bucket list destinations any longer.

If you’re planning your family safari travels, here’s what we learned to make your trip incredible.

Contents hide
1 Use a travel planner or agency
2 It’s a long journey – consider a layover
3 Take your kids…when they’re older
4 Take the pharmacy with you
5 On Safari, humans are the minority
6 Bring a really good camera
6.1 It’s a trip of a lifetime – splurge a little 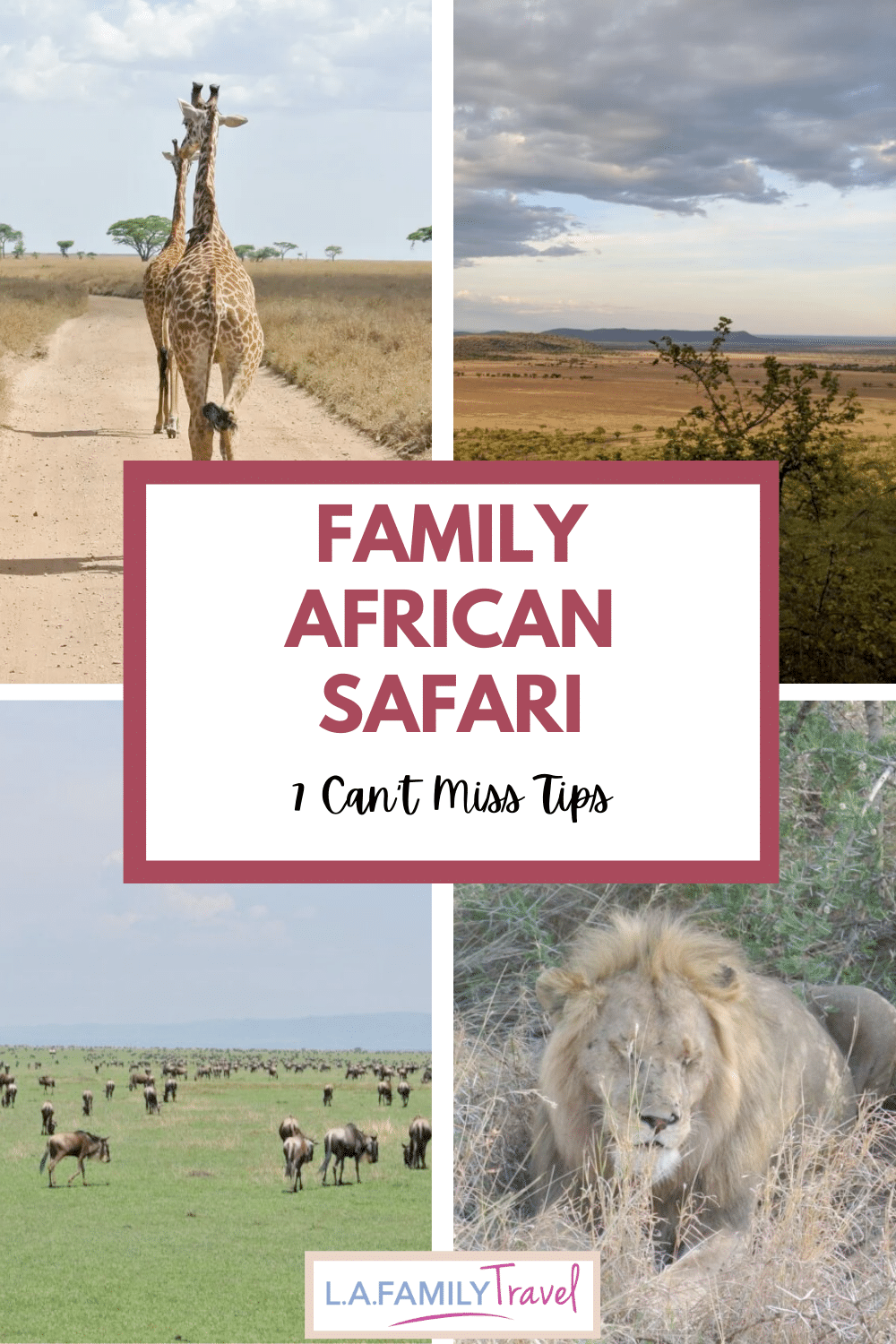 Use a travel planner or agency

Trying to plan a trip in a foreign country is tricky, but it’s even more challenging in a country where there are larger language barriers or poorer infrastructure and you’re trying to plan a complicated experience, like a safari.  So our number one tip is to hire a professional to plan it.  Knowing that our entire trip was planned out, that we had a local contact that we could reach out to should anything go wrong, and that someone knew our general whereabouts at all times was a huge weight off of our shoulders.  We didn’t have to worry about connecting flights, cabs, or tickets.  Everything was already arranged.

Serengeti National Park is located in the northern part of Tanzania, several hundred miles from the capital city of Dar es Salaam.  At just shy of 5,700 square miles, the park itself is larger than the entire state of Connecticut and it’s made up entirely of dirt roads.  That means that the easiest and quickest mode of long-distance travel is by plane.  But these aren’t your traditional airplanes with peanut packets and safety cards in the seatback pockets.  We’re talking tiny 8 seater prop planes and dirt runways that have you sweating a bit every time you take off and land (the views from above are so worth it, though).

There are no ticket counters, no Departure and Arrival boards, and 50% of the time, there were no bathrooms.  So, having everything planned seamlessly is well worth the money of hiring a local travel planner who is familiar with the area and can give you that peace of mind. 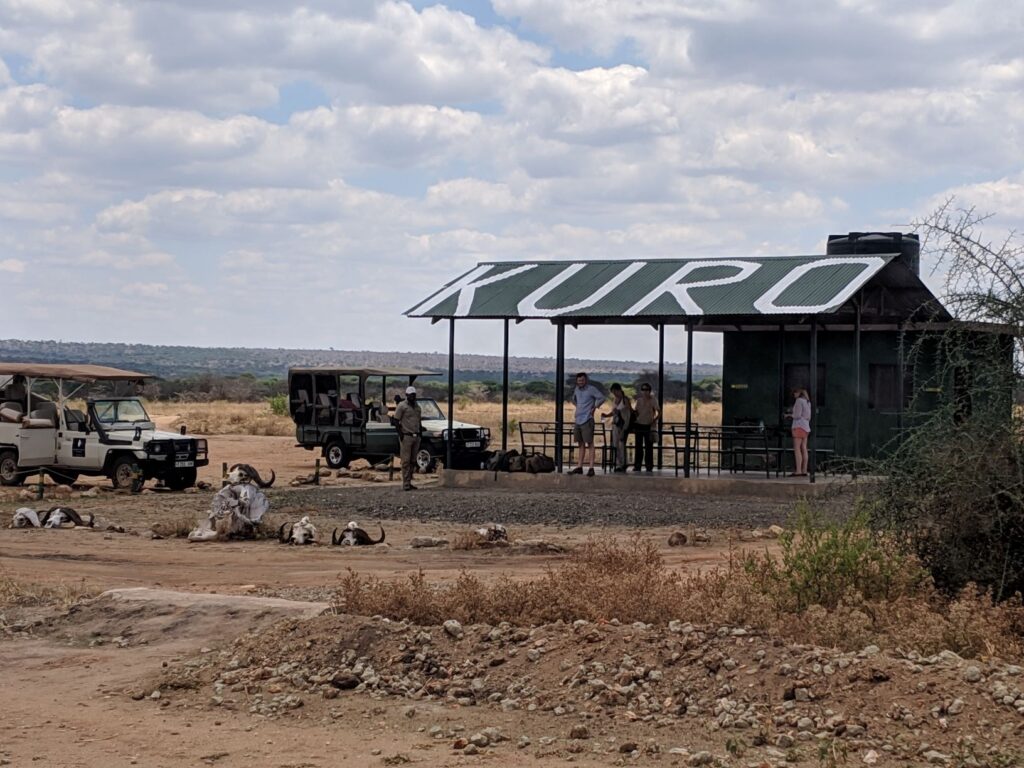 When we planned our trip, there were no airlines operating direct flights from the US to anywhere in Africa close to Tanzania.  We were going to have to fly through Europe or the UAE, have a multi-hour layover, and then fly on to Africa, which would’ve equated to almost 24 hours of straight airplane and airport travel.  For someone who can barely sit still long enough to get her hair cut and colored, that was pretty much out of the question. So, we gave ourselves a trip within a trip by booking a 24 layover at our first destination.  It was a game-changer and something we highly recommend.

We opted for Amsterdam, since neither of us had been, but there were also flights through Paris, London, and several other major European cities we could have chosen.  It gave us a chance to get out, move around, and experience a city we’d never visited before and maybe wouldn’t have gone to otherwise. 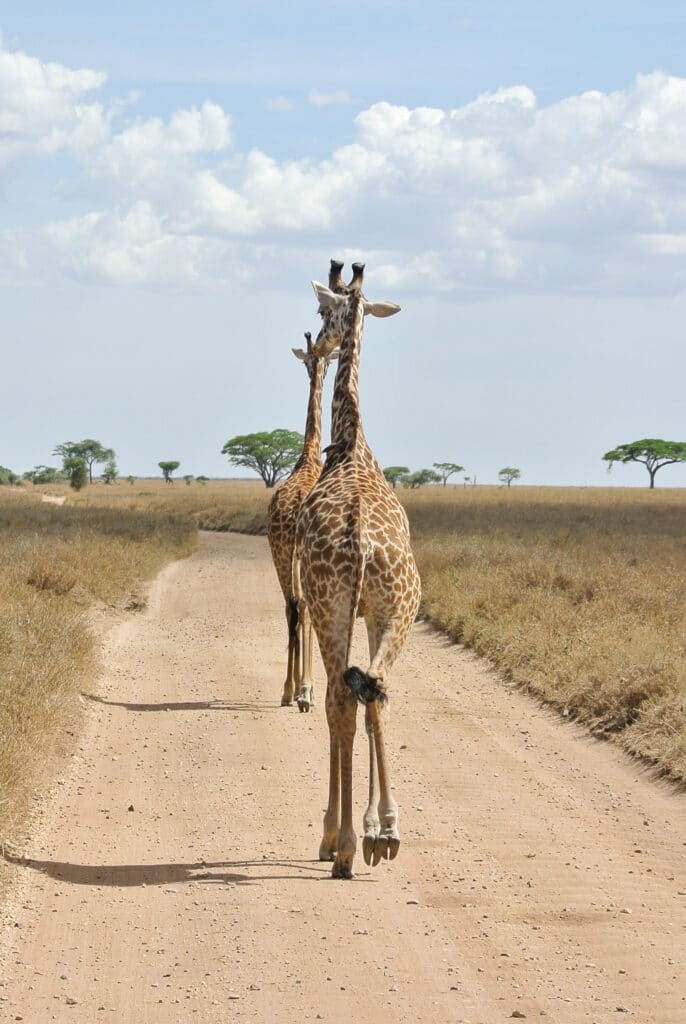 You guys lead the way

One thing people don’t tell you about going on safari is that it is hard on your body.  We thought if we booked a luxury African safari, we’d be sitting in plushy Land Rovers just watching the animals roll by our windows – what could possibly be strenuous about that?

What we neglected to understand is that you are driving on dirt roads, over ditches, rocks, and tree branches.  Yes, you’re in a Land Rover and it has seats and it’s air-conditioned (insert praise hands emoji here), but you’re also getting thrown around and jostled for hours on end.  It’s fun, but it’s rough too.

Add to that the heat, the concerns about being around wild animals, that your days start very early, and the sheer expense and hassle of getting to Africa in the first place, and you’ll begin to understand why it’s not the ideal trip for young kids, no matter how cool it sounds.  In fact, we didn’t see anyone younger than sixteen the entire time we were on our African safari.  So, if it’s a trip you’d like to take with your kids, we recommend waiting until they’re old enough to not only enjoy it but also tough it out.

Take the pharmacy with you

When you’re in the Serengeti (or at most national parks that offer safaris), you are usually very far from civilization.  When we would go to sleep at night, we’d turn out the lights and wouldn’t see another light on the plains that stretched for miles.  It literally felt like the end of the world.

So if you happen to get a headache, or worse, traveler’s diarrhea, there’s no local pharmacy to pop into for relief.  You’re on your own.  Some of the best advice we can give is to plan ahead and pack for even the most unlikely scenario.  Headache, stomach upset, any personal prescriptions, your time of the month – have it all handy, just in case.  Also be sure to pack plenty of sunscreen, heavy duty insect repellent, and malaria pills if your doctor recommends them. Their mosquitos are no joke. There are plenty of homeopathic options for all too. 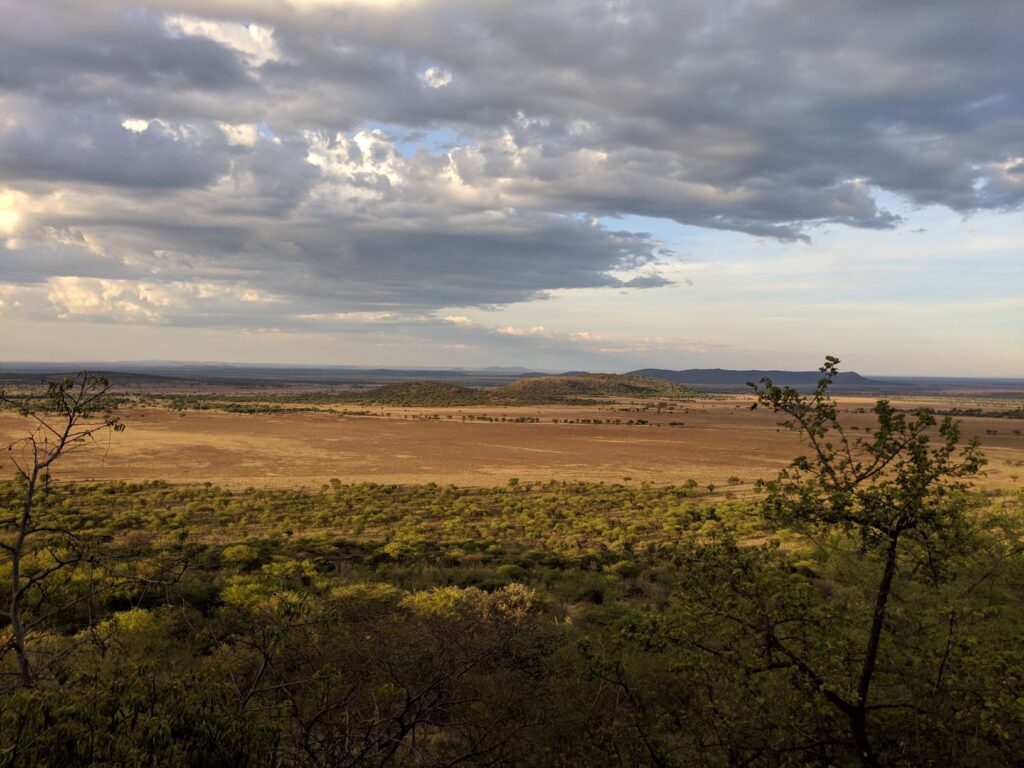 Kind of reminds you of that REM song, doesn’t it?

Don’t Miss! Explore the Wild Side of Florida

On Safari, humans are the minority

Our safari was the only time in my life where I have felt like it was the animal’s domain and I was infringing.  We would listen to hyenas howl at night outside our hut.  At dinner, we could hear lion prides challenging each other across the plains.  One day, when we left our hut door open, with only the screen closed, a baboon broke in and stole vitamins and face wipes. Talk about a city folk faux pas!  We had to adjust our way of living to fit in with theirs.

While I never felt unsafe, it was clear that there were lines we shouldn’t cross.  We weren’t allowed to leave our hut after dark without an escort.  Anytime we were seated on the patio at the lodge, there was always an employee standing close by (we later learned a leopard had chased a baboon onto the patio weeks prior to our arrival).  We were never allowed to get out of the safari vehicle when we were stopped.  While it might sound like a risky adventure to some, as long as you are mindful of your surroundings and stick to the rules, there’s really no need for concern. 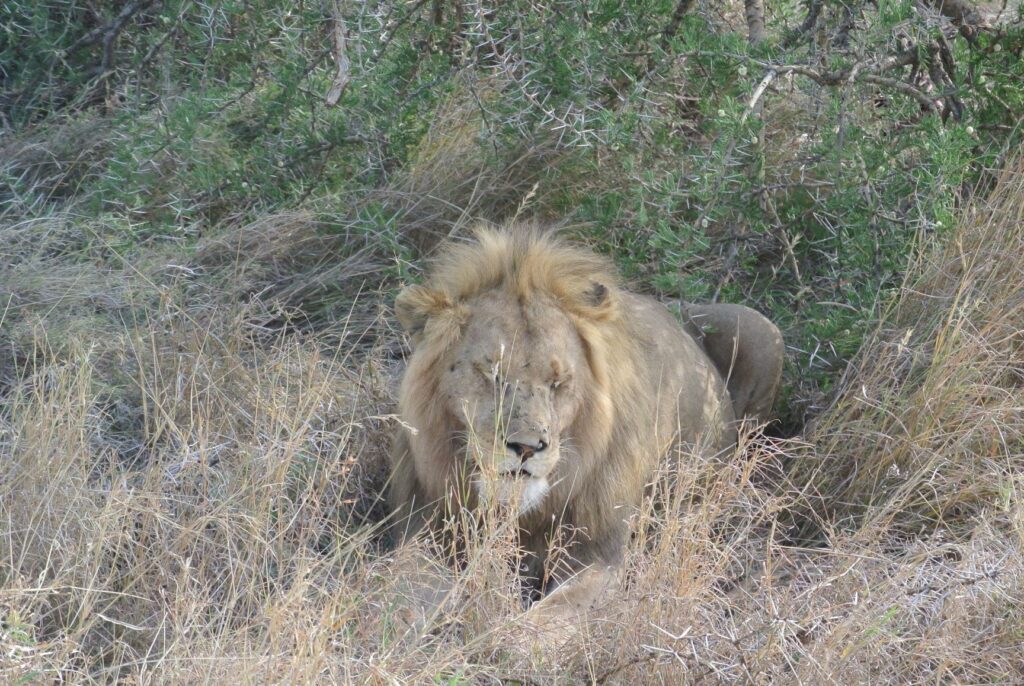 Between the two of us, my husband and I came back from our safari with over a thousand photos of places we saw animals.  Everything was so mind-blowingly beautiful that we couldn’t help but go a little photo crazy.  Although by the third day, we’d seen so many wildebeests and zebras that they’d kind of lost their appeal.

We took a bunch of photos with our phones, but we also borrowed a really nice camera from a family member and took some with that as well.  As could be expected, the photos taken with the camera turned out way better.  So, if you can borrow one or buy one refurbished, it’s definitely worth it.

Besides, one of the nice things about being off the grid was not having to be chained to my phone.  There’s no wi-fi (I checked) so you might as well leave the phone in your room. 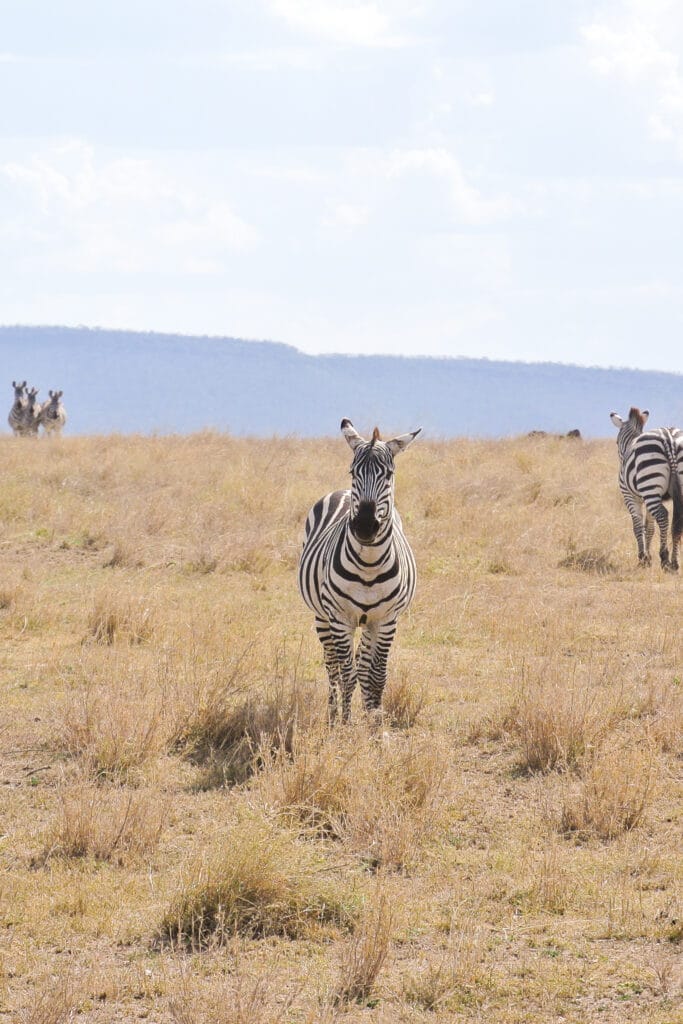 It was a whirlwind two weeks, a day in Kilimanjaro, four days in the Serengeti, a week in Zanzibar, the best places to see animals (lions!) on an African Safari.

It’s a trip of a lifetime – splurge a little

If you’re planning to do a safari and are saving up for it, it’s worth it to save a little extra and do it right.  More than likely, you’ll only do it once, so make the most of it while you’re there.  Our motto on special trips like this is go big or don’t go at all.

We saved up for the hot air balloon sunrise safari, the nicer lodge with modern amenities (this girl does not do camping, and certainly not when there are lions and water buffalo involved), and private safaris with our own guide.  And we didn’t regret any of them.  In fact, in a lot of ways, they made the trip.  The one that is a must in our opinion was the private safari.  Having one on one time with a guide afforded us the opportunity to ask lots of questions, learn more about the local culture, and also decide how we wanted to spend our day.  If we wanted to spend an entire afternoon roaming the plains searching for the elusive black rhino, then we could do that (and we did, though we didn’t find him). 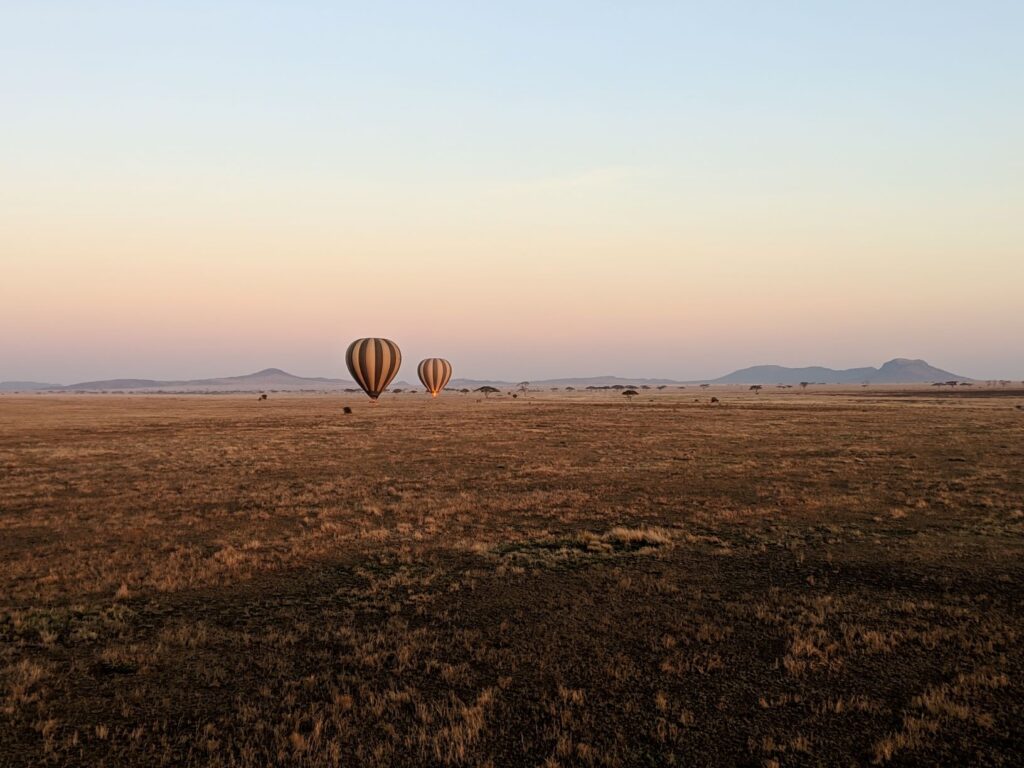 The experience of a lifetime.

Hopefully, someday soon, we’ll all be globetrotting again.  But in the meantime, we can plan and save so that when that day comes, we’ll be ready for the next adventure, safari or otherwise. 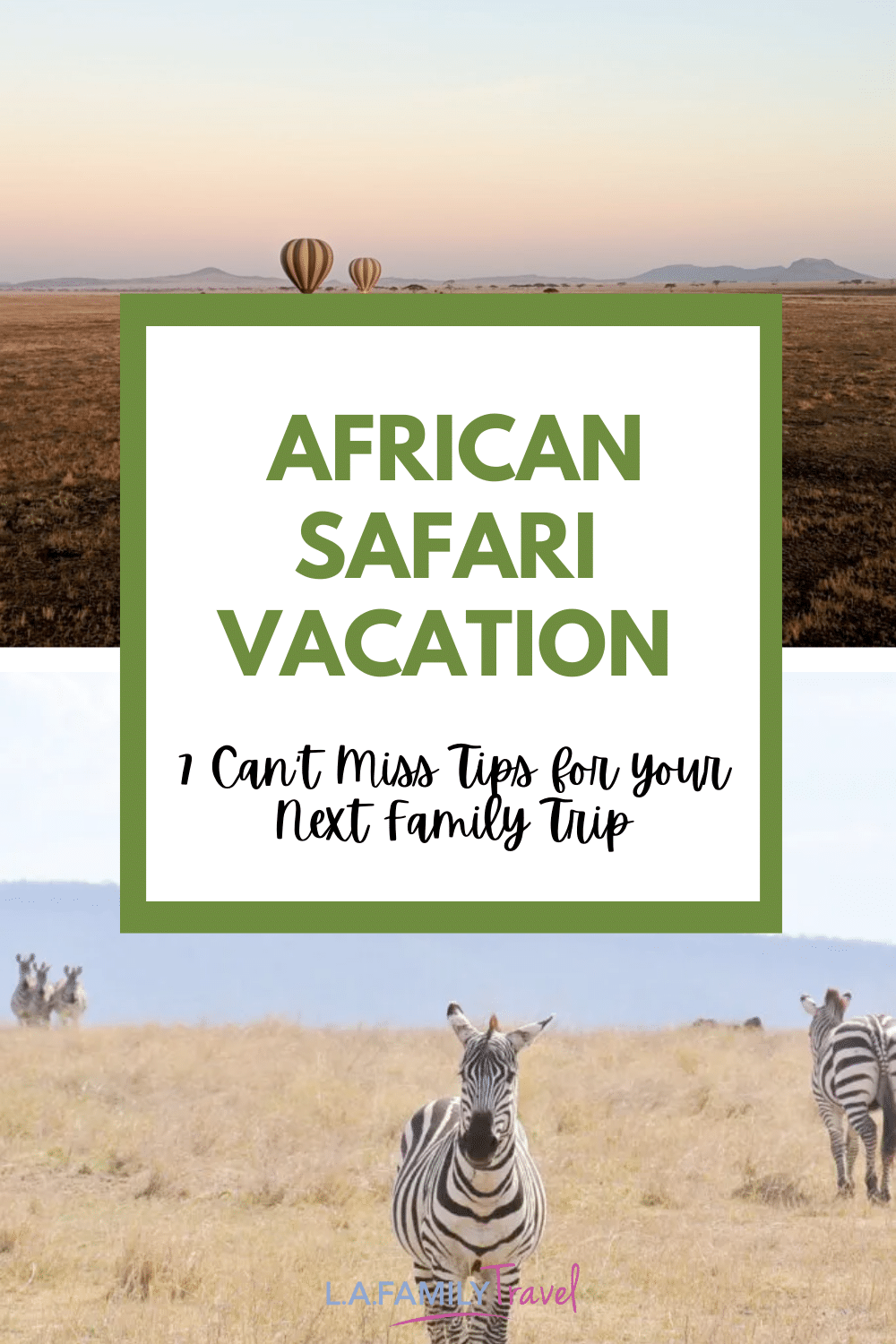 Morgan is a brand designer and writer who splits her time between managing her creative studio, Atlas + Anchor, and writing about her lifelong love affair with travel. A wanderluster at heart, she’s a big proponent of exploring the roads less traveled because they often lead to amazing views, memorable stories, and the most unassuming but life-changing restaurants. Originally from Ohio, Morgan now lives in the heart of Chicago with her family and is quite possibly the only person within city limits who hates deep dish pizza.