There were few places on Earth my parents loved to visit, with their kids, more than New York City.  From a young age, my siblings and I became well-acquainted with the vibrant city, and for me, it formed a lifelong love with the Big Apple.

In the early years of our relationship, my husband and I had a yearly tradition of going to New York in early December to experience the city during the holidays.  In fact, we got engaged in Washington Square Park in the middle of a snowstorm.  One day, when I share that story with my kids, I'm sure it will elicit many an eye roll and snorts of disgust at the thought of their parents ever being crazy-in-love twenty-somethings.

But, New York in all its craziness and insanity is one of those truly magical cities that totally ensnares you the moment you get there and continues to live with you long after you leave.  It's hard to narrow down all it has to offer but if you only have a few days, don't miss these fun activities to do with your kids in New York City, the city that never sleeps. And bonus! Once you're done, they'll be sure to! 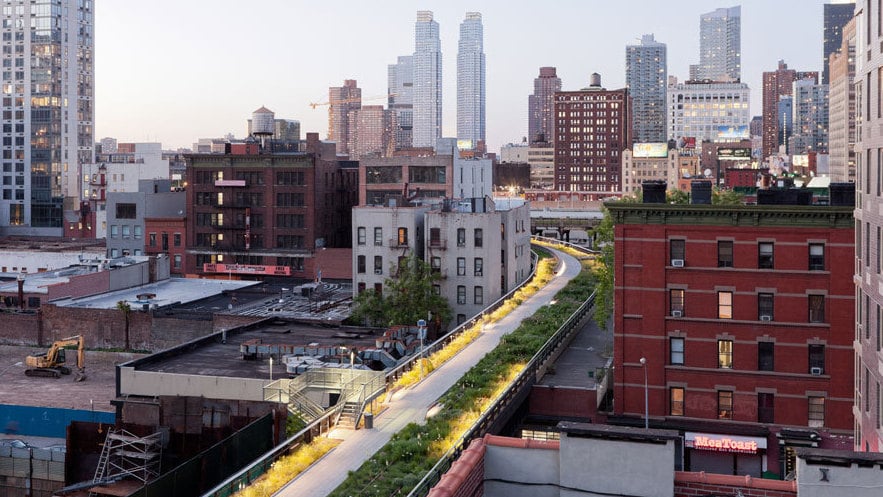 New York's Highline is definitely not to be missed! Photo courtesy of NPR.

Once an elevated freight rail line that operated above the streets of the city's West Side, the Highline is now a unique elevated public park and walking trail that runs from Gansevoort and Washington to 30th and 12th, or from the West Village, through Chelsea, and up to Hudson Yards.  With beautiful gardens full of distinctive plants bordering the trail and street art decorating the buildings that border it on each side, the park is really a combo hiking trail and art exhibit.  It offers stunning views of the city, and takes you right past two other stops on our list - the Chelsea Market and the World Trade Center Memorial.

It's a memorable way to experience the West Side, keep their little bodies moving, and something both parents and kids can enjoy.

Quite possibly one of the most famous parks in the world, Central Park is a giant 843-acre park smack dab in the middle of the city.  Spanning more than 2 miles (or 50 city blocks) and a half-mile wide, the park is a focal point in New York.  It has 8 lakes and ponds, 21 playgrounds, 1 zoo, and more than 6 miles of roadways.  How many other urban parks do you know that offer all that?

Some might dismiss it as just a park.  But to me, it's the quintessential New York experience and one your kids will absolutely love.  At the Kerbs Boathouse, you can rent a boat (actual boat or mini remote-controlled boat) and take it for a spin on the lake.  Swing by Sheeps Meadow with a picnic lunch or a frisbee.  Go on a hunt for famous statues, including Mother Goose, Balto, and Alice in Wonderland.  Or grab some ice cream cones from a sidewalk vendor and spend an afternoon getting lost on the trails.

Other fun activities at the park include fishing, basketball, baseball, tennis, and kite-flying.  During the winter, you can try your hand at ice skating or go sledding on one of the many hills.  There's also a restored and operating carousel and the Central Park Zoo, where you can see tons of cute and exotic animals that call Manhattan home.

My parents were theater buffs, so our trips to New York City always included a Broadway show of some kind.  As kids, we were undoubtedly not as appreciative as we should've been of the cultural education we were receiving and my kids have continued that tradition. However, as an adult, I can now appreciate my memories of Les Miserables, Phantom of the Opera, South Pacific, West Side Story and Wicked.  Plays that we wouldn't realize until much later are world-renowned productions.  But,it did instill in us, from a young age, an appreciation for the arts and a love for theater that we would carry with us into adulthood (at least for me and my sister - my brothers maybe not so much). So, now, we look at the show tickets as a future investment, like those piano lessons during which our kids sometimes groan.

These days there are a ton more family-friendly options on Broadway. Not every kid is thrilled about a four-hour long production about a repentant thief during the French Revolution, so they can instead watch The Lion King.  The music in the production of The Lion King is incredible and the costumes are colorful and fun, perfect for entertaining even the youngest theater goers.  Beauty and the Beast is another fun one, as is Seussical the Musical and even Wicked, which is my personal favorite. 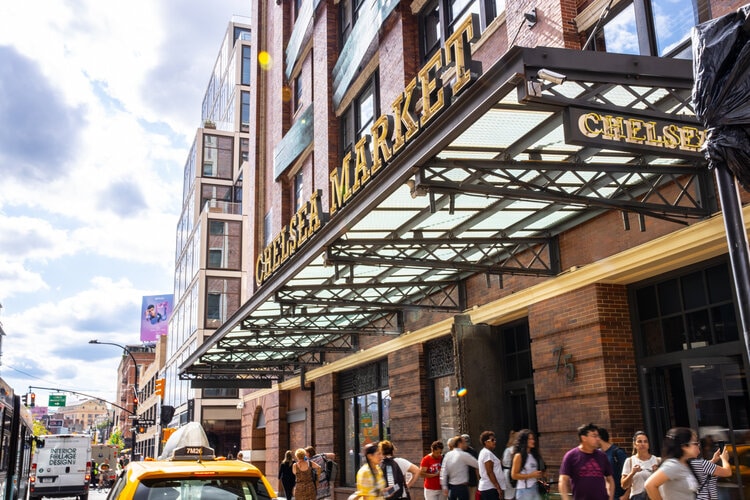 One of the best shopping experiences in NYC! Photo courtesy of Chelsea Market.

Given the choice between shopping the world-famous brands on Fifth Avenue or the small artisan shops in Chelsea Market, I'd take Chelsea Market any day.  Billing itself as a "neighborhood market with a global perspective," the market is almost like an indoor bazaar that houses everything from butchers and fishmongers to artisanal cheeses, imported European dry goods, and handmade art, fashion, and home goods.  It was at one time the home of the National Biscuit Company (you might know it as Nabisco) and is now one of the more unique and popular spots in the city.

You owe it to yourself to take an afternoon with your family, grab some lunch at one of the cafes in the market, and just wander around.  With shops peddling artisanal hot sauces, handmade ornaments, and even vintage postcards, it's a perfect place to find souvenirs or gifts for loved ones back home.

Visit The Statue of Liberty and Ellis Island 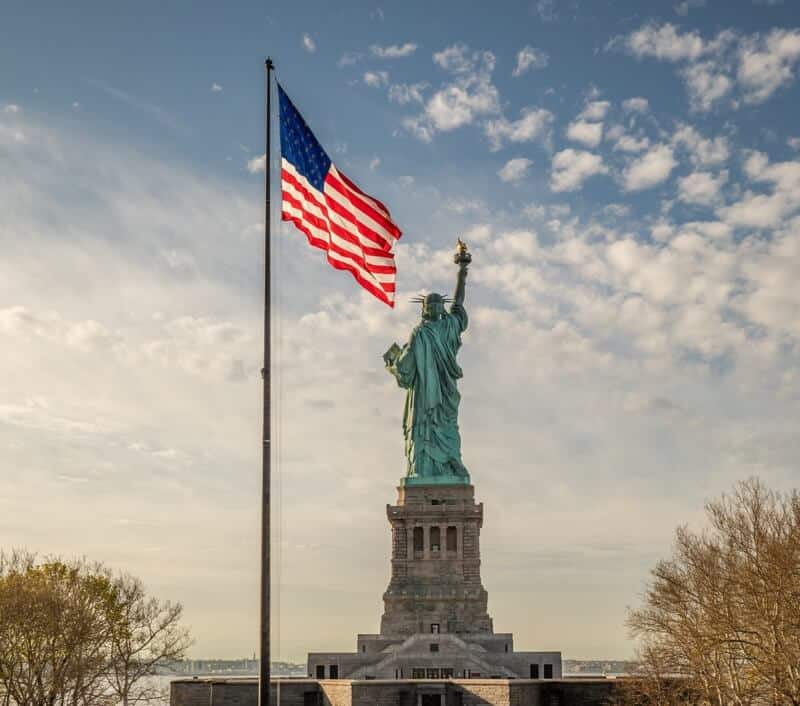 Can you think of a more American view? Photo courtesy of StatueofLiberty.org.

Ellis Island and Liberty Island, home to the Statue of Liberty, are relatively close to each other and accessible via the same ferry, you can easily check them both off your list in a single afternoon.

Both Ellis and Liberty Islands have highly popular museums, with the Statue of Liberty Museum only just completed in 2019. Learn the story behind the famous gift, how it was constructed, and even explore the interior of the statue in a virtual reality experience.  You can also climb to the top of Lady Liberty's crown, if you're feeling adventurous. Or you need to wear out your kids.

On Ellis Island, you can visit the Family History Center to see if you can trace your ancestors to one of the 12 million people who immigrated through Ellis Island over the years.  Or visit the National Immigration Museum to experience first hand what it was like to immigrate to America in the late 1800s and early 1900s.  The views of the city from Ellis Island are also especially beautiful and poignant. 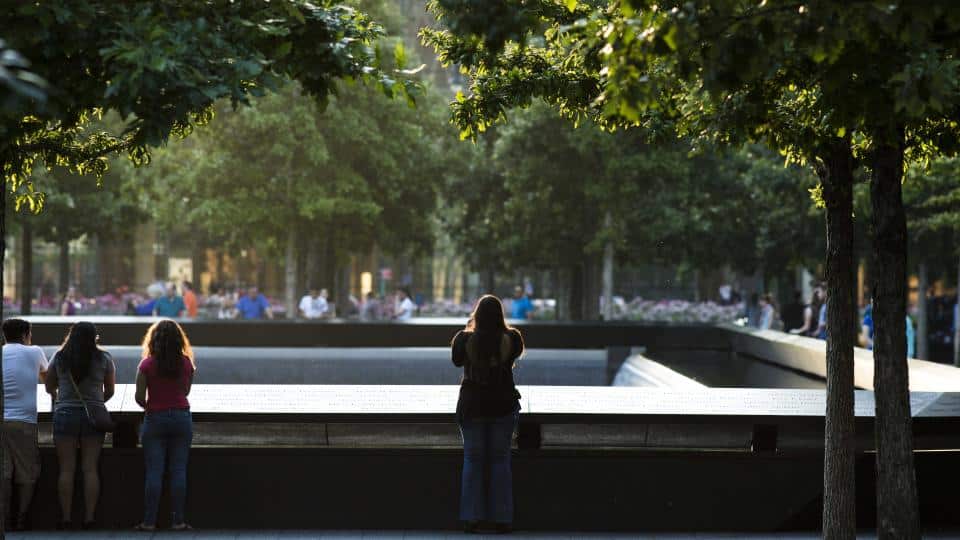 Words can't express how beautiful the memorial is. Photo courtesy of 9/11 Memorial & Museum.

I believe the National September 11 Memorial & Museum is one of the most important and life-changing things to see in New York City, not just for adults, but for kids as well.

The memorial itself is breathtaking and well done.  Two square granite basins sink several stories into the ground and outline where the towers once stood, tranquil fountains at their core. Around the frame of each basin are etched the names of the 2,977 people who lost their lives during the attack.  Apart from being beautiful, it's enough to make your heart stop when you take in the magnitude of the site and how many names are included in the granite.

The museum tastefully commemorates and tells the story of one of the most pivotal and devastating days in United States recent history.  It's a great opportunity for older kids especially to learn about the events of September 11 and the significance they hold for the world today. 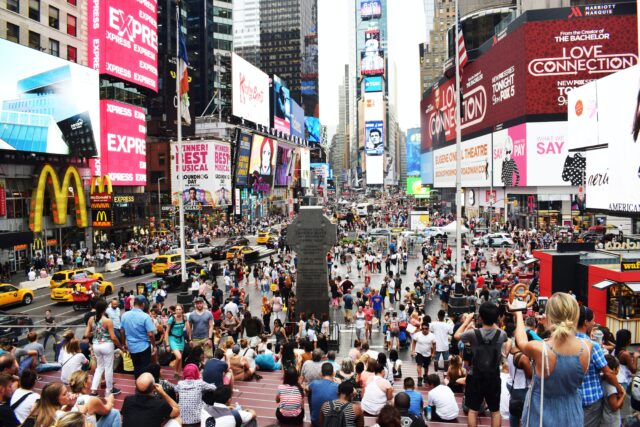 There is nowhere on earth like Times Square.  Let's be honest, have you even been to New York if you haven't made your way to Times Square?  Right in the heart of the Broadway Theater District, Times Square averages between 300,000 and 400,000 visitors a day and is the second most visited tourist attraction in the world, just behind the Las Vegas Strip.  It's known for its garish display of flashing signs, neon lights and video screens several stories tall that are suspended above the streets.  Classic American staples have taken up residence in Times Square, including McDonald's, TGI Fridays, M&M World, and the famous Coca Cola sign.

Even if you tend to shy away from tourist attractions, Time Square is worth a stop just for the experience and the people watching.

Don't miss these 8 fun activities to do with kids in New York City, the city that never sleeps. And once you're done, they'll be sure to!

As a kid, I remember my parents taking us to FAO Schwarz in New York City and thinking it was the most magical place in the whole world.  Clearly, this was before I was introduced to Hogwarts.  But, it was the biggest toy store I'd ever been in, with floor upon floor of stuffed animals, LEGO sets, board games, and Barbies. There were giant candy displays that reached all the way to the ceiling and a whole section of the store was dedicated to magic sets.  It looked like what I'd imagined Santa's workshop to look like.  My siblings and I were in heaven.

Nowadays, I can appreciate how stressful it must've been for my parents trying to wrangle four kids, under the age of ten, in a massive toy store teeming with people.  But, I fully believe the experience is worth the momentary chaos.  If you're concerned about crowds, I recommend going in the morning before the stores get too busy.

PRO TIP: Set a budget and size limit for your kids before you go so they know in advance what souvenirs they're allowed to get. Otherwise, they'll keep asking for everything.  And that six-foot plush giraffe won't fit into an overhead bin.

As the primary hubs on both the west coast and the east coast, it's very easy to get from L.A. to New York City and there are tons of direct flights through every major airline.  The only hard part is the length of the flight, which is typically about five hours.

For places to stay, you can't get more New York than the Plaza Hotel.  Located in the heart of Manhattan at the southeast corner of Central Park, the Plaza is often featured in movies and TV shows that are filmed in NYC because of how iconic it is.  The Renaissance Times Square is smack in the middle of - you guessed it - Times Square, and is perfect for families who love to be in the middle of the hustle and bustle.  But for families with older kids, or couples who are maybe looking for a more lowkey experience, we highly recommend the Library Hotel in Midtown.

We love to use TripAdvisor when booking our stays. TripAdvisor will search for the best deal from all the online booking sites and you can read about the amenities each hotel offers plus feedback from previous family's stays.