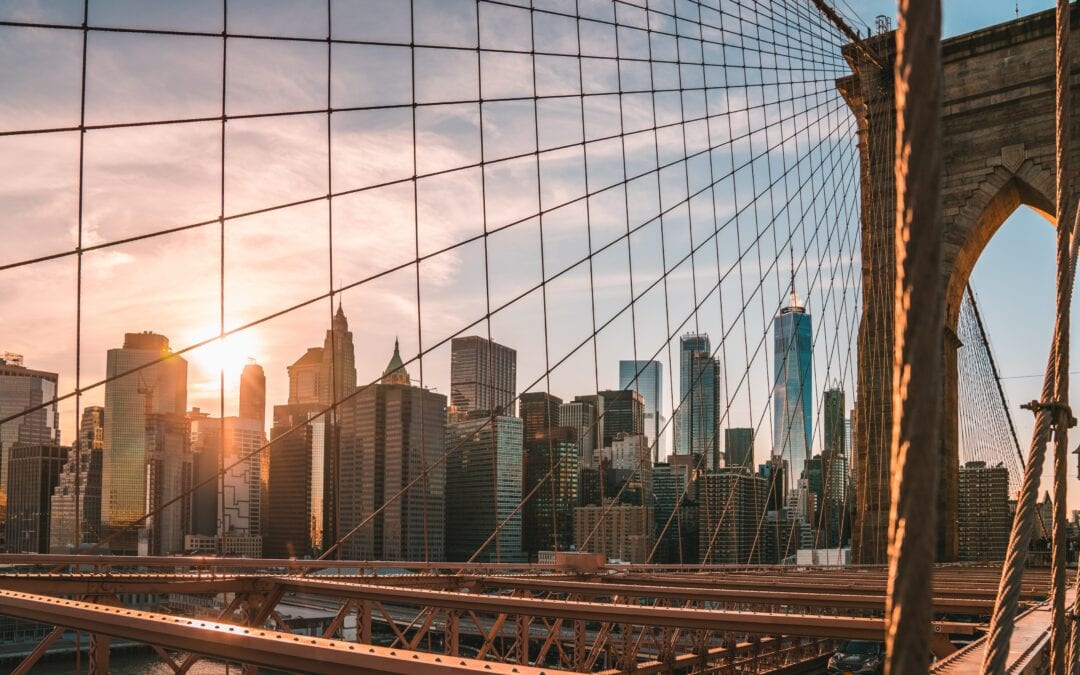 I recently took a weekend girl’s trip to New York City. (And no, that is not a misplaced apostrophe, because there was only one girl on this trip – me.) That’s right, I did New York solo. I did visit and spend time with friends, but much of the time I was alone, and it was great.

I love New York, but hadn’t been to the city in fourteen years, so when a business trip in Philadelphia (just a short train ride away) was put in my calendar, I decided to take advantage by heading out to New York the weekend before.

In my thirties, I used to head out to New York for a girls’ weekend once a year. My girlfriend and I would fly in on a Thursday afternoon and arrive at midnight. After checking into our hotel we’d hit a bar and stay out until two o’clock (or four o’clock) then sleep late and go shopping and spend too much money on things we didn’t need. We’d try to hit a Broadway show. We’d go to a museum (she liked The Frick, I liked The Guggenheim, we both liked The Met.) We’d pack as much as we could into those three short days, while eating too much, drinking too much and spending way too much money.

I wanted to make this trip different. I was seeking balance. I realize that when seeking balance, New York City is not the place that immediately comes to mind, but I was determined to find it. I wanted to enjoy myself, but I didn’t want to go overboard. I wanted to eat good food, but I also wanted to eat healthfully when I could. I didn’t mind spending money on things that had value, but I didn’t want to waste it on things I didn’t need. And above all, I did not want (and could not afford) to spend $400-$500 a night on a hotel room.

I arrived on Friday afternoon and stayed my first night at a friend’s house in Yonkers. Yonkers may also not immediately come to mind when thinking of taking a trip to the Big Apple, but I found it delightful. My friend lives on a street with a cool vibe that has a beautiful view of the Hudson. She and her fiancé treated me to dinner at Harvest on Hudson in Hastings and it was wonderful. Afterwards, we went to a funky bar across the street from their place for a nightcap. And maybe a shot. (Hey, I said balance, not no fun!) 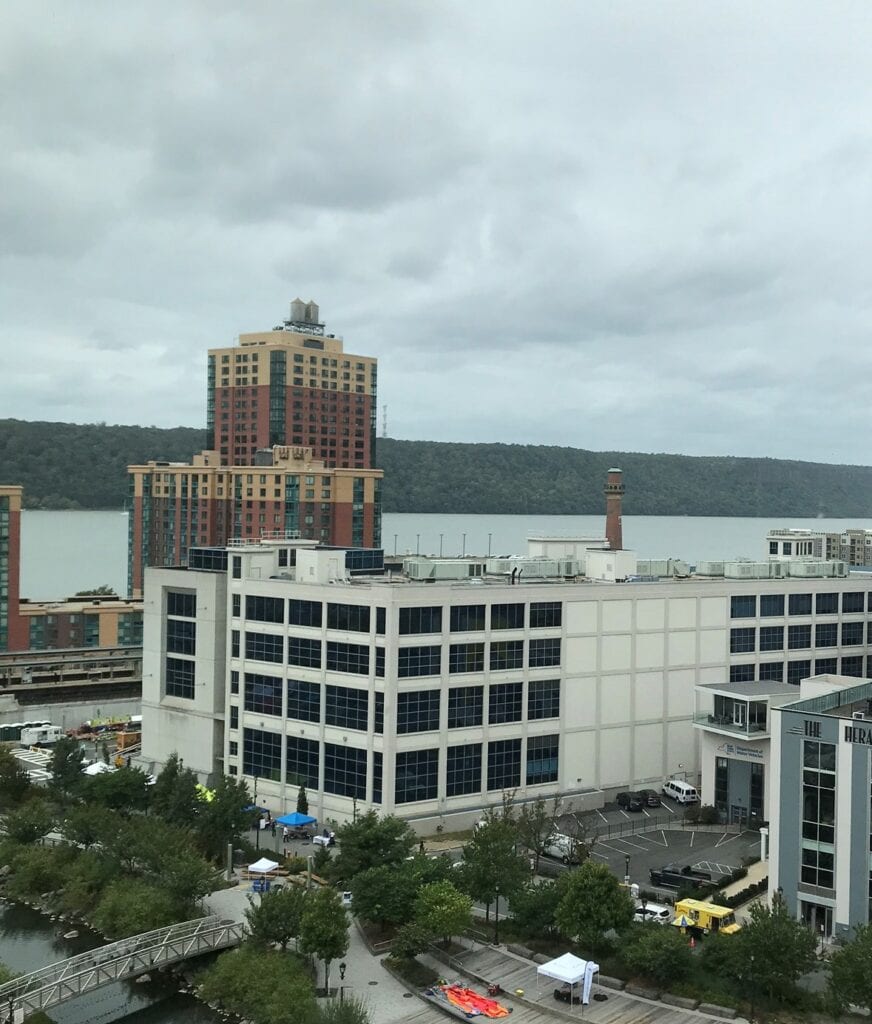 Saturday morning, I slept late (which for me is eight o’clock – even on vacation) and lounged around, allowing myself to be lazy and hang out with my friends for a few hours. Then I took a Lyft to the city to check into my hotel.

I chose the EVEN Hotel in Midtown due to its excellent location and even more excellent price. EVEN markets itself as a wellness hotel and was the perfect hotel for me to stay balanced and on budget. The rooms are small, but efficient. Each room is equipped with a mini workout studio that includes resistance bands, an exercise ball, yoga mat, yoga block, foam roller, and workout guide created by holistic wellness expert (and fitness goddess) Tammy Stokes. The hotel will even wash your gym clothes for free during your stay! And if you prefer to work out in a hotel gym, EVEN had one of the nicest and largest hotel gyms I’ve ever seen. There was a ton of machines, workout equipment and even a ping pong table! Other great features are in-room coffee with liquid creamer (because everyone knows powdered creamer is the worst!), a standing desk (also a sitting one), a good-sized modern bathroom, and an iron and ironing board in a drawer under the bed to save space. The room rate the nights I stayed in the beginning of September were $220 a night. (A bargain for New York City!)

After checking into my hotel I grabbed a quick mini sandwich at Maison Kayser, a little French boulangerie across the street from my hotel and headed to The Metropolitan Museum of Art for a Museum Hack tour called Badass Bitches. 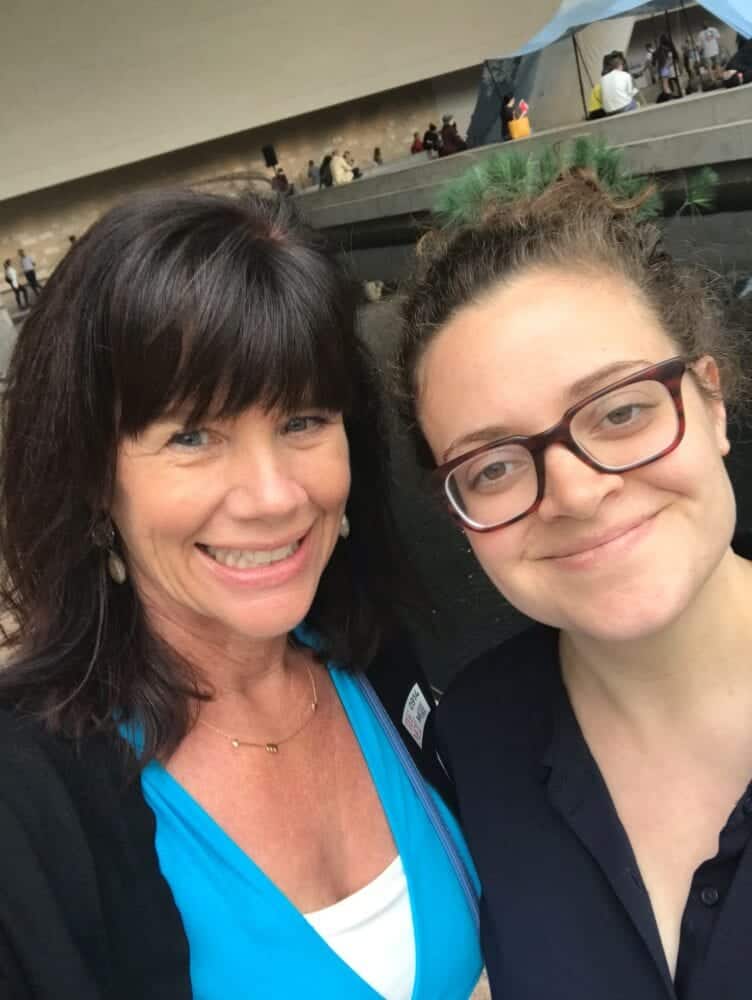 Me and our awesome BAB tour guide Sarah.

Museum Hack is an independent tour company that give small group tours for people who think they don’t like museums. I do like museums, but this tour made me like them even more. Trust me, this is the best two hours you will ever spend in a museum. If you like to laugh, hear juicy gossip about dead people, and consider yourself a feminist, then the BAB tour is definitely for you. Our tour guide Sarah was spectacular. She told us the story of the awesome and unnerving Lilith statue by Kiki Smith, the reason this Bacchante and Infant Faun was considered scandalous (it’s not because the woman in the sculpture is nude -or holding grapes and an infant like a drunk mom- but because she is smiling – the nerve!), Jackie Kennedy’s contribution to The Met (and what made her a BAB), and about the gross inequity in the amount of art in The Met by female artists. (Spoiler Alert: there’s not a lot.) And hey, if feminism isn’t your thing, no worries – Museum Hack gives other cool tours as well. 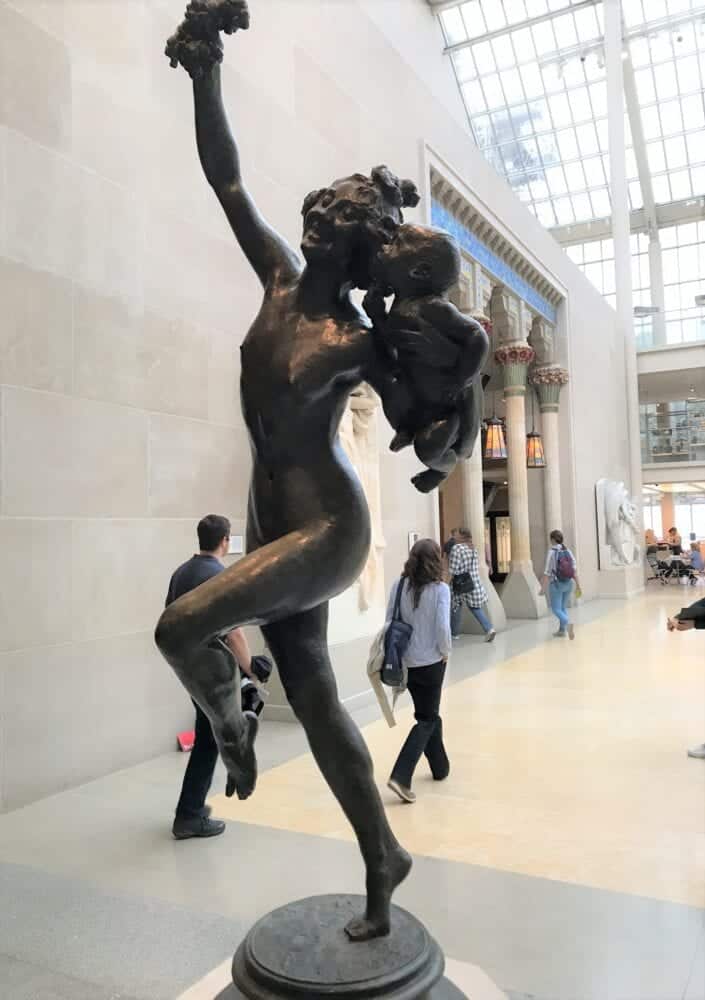 After the tour I wandered around The Met for another hour or so. I went through The Temple of Dendur, wandered through the French Impressionism wing (swoon!), spent some time checking out some modern art, then sat on the steps of the Met for a bit while taking in the vibe of the city (as you do when in New York). 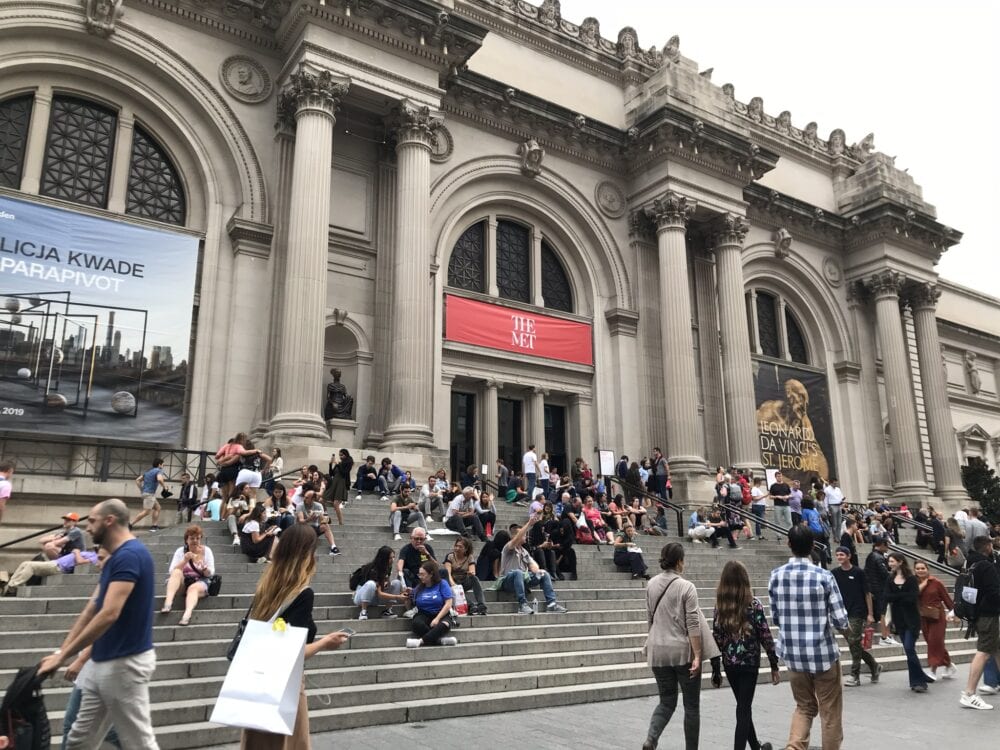 Afterwards I walked the two-and-a-half miles back to my hotel, first through Central Park and then along 5th Avenue. Central Park always fascinates me. It’s like this huge piece of suburbia planted right in the middle of a bustling metropolis. (Which I suppose is the point.) I had fun window shopping (as opposed to shopping shopping) and 5th Avenue truly is a delight to stroll down. 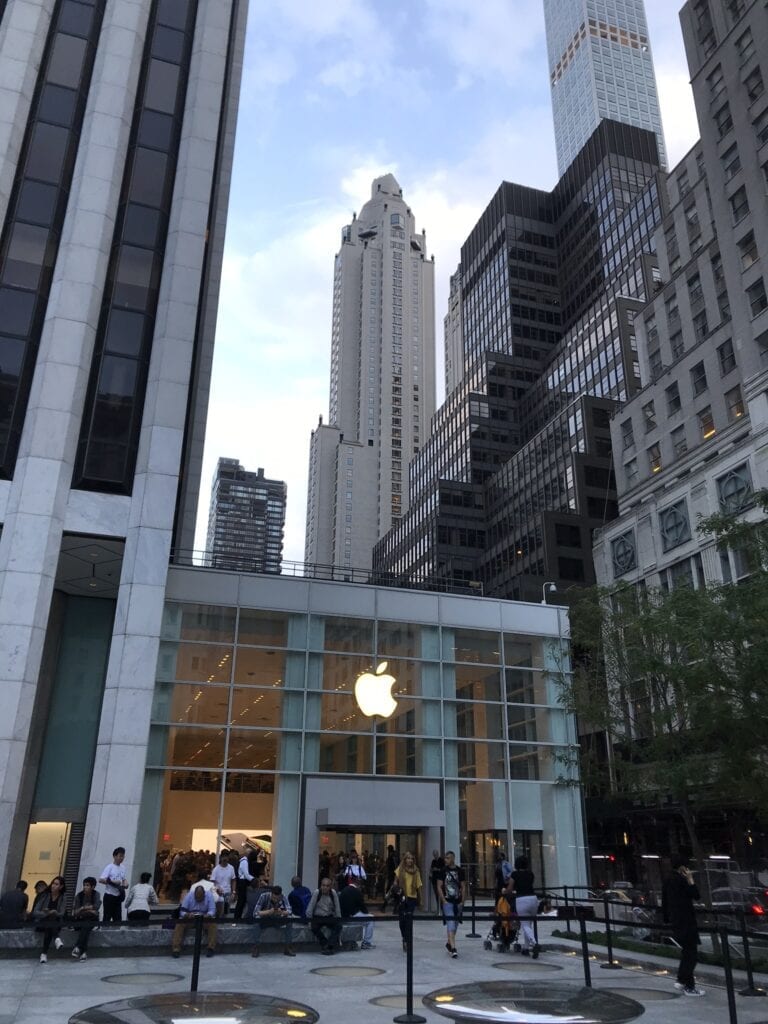 Apple in the Big Apple

I was getting hungry and wouldn’t be having dinner for a few hours, so I decided to pre-dinner with a slice of pizza. Greasy New York pizza certainly wouldn’t help me with my quest to stay healthy, but I rationalized that it was cheap and I needed to eat something. Plus no trip to New York is complete without it. (I’m sure there’s much debate over which pizza place in the city is best, but I’m not a New Yorker so for this Cali girl any pizza shop will do, so I just found a by-the-slice place off of 5th Avenue and it met my needs.) 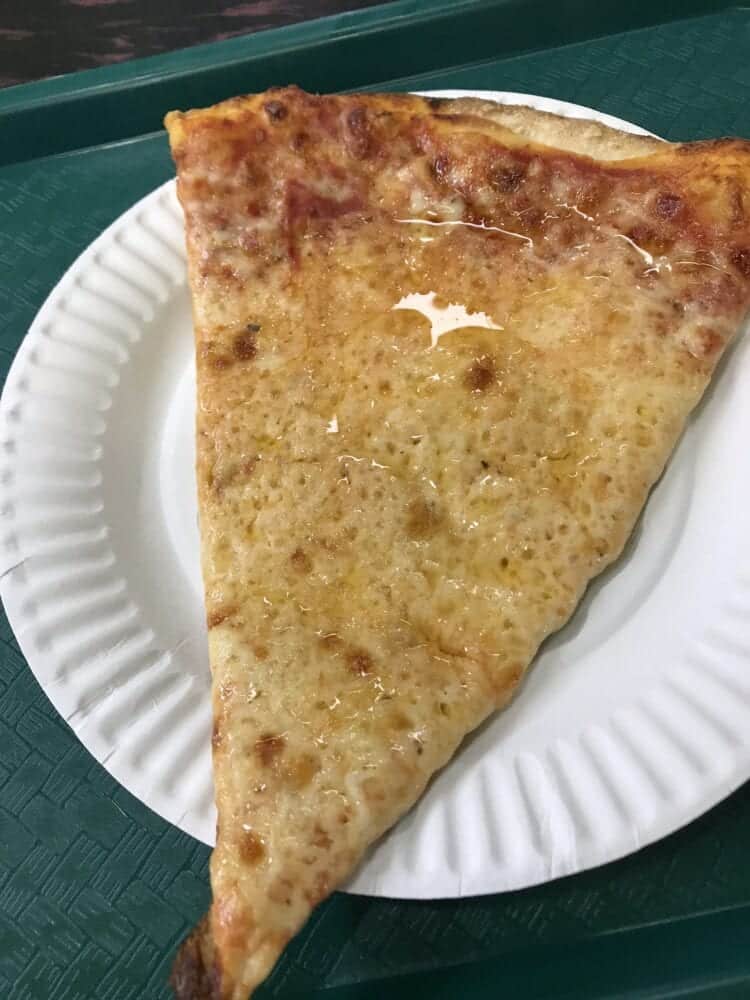 I feel compelled to tell you that I did blot off that grease. (Mostly.)

Around nine o’clock, my friend Pat made a trek in from the suburbs of Rocklyn County to take me down to The Village to visit a few of his favorite dive bars. Pat and I met thirty years ago when we were both backpacking through Europe and have remained friends ever since. We had bar food and beer (okay, not very healthy) but afterwards we worked it off (or at least part of it) when he gave me an hour-long walking tour of the Village. Highlights were the Washington Square Arch, Carrie Bradshaw’s front stoop, and the Friends’ apartment building. Pat’s son was racing in a triathlon Sunday morning, so he had me back to my hotel by midnight. (Definitely not like the old days!)

You can see night photography is not my strong suit. (Or Pat’s!)

I slept late (this time until nine!), did my in-room workout, and had a healthy breakfast at the hotel. My plan for the day was to visit the 9/11 Memorial Museum. The museum is four miles from my hotel and because it was a beautiful perfect-weather day (and I had a decadent dinner planned), I decided to walk. I loved watching the neighborhoods change as I walked down 3rd Avenue and falling in and out of step with people. I’d walk more or less in tandem with someone for a few blocks and then they would turn down a street or into a shop or restaurant for Sunday brunch and I’d fall in step with someone else. I stopped about halfway through the walk at a neighborhood park called Stuyvesant Square and ate a delicious summer salad with watermelon, feta cheese, and roasted corn I’d picked up at Maison Kayser when I left the hotel. For me the best way to experience a city is to walk through it as the locals do.

The 9/11 Memorial Museum was somber and heart wrenching and beautiful. The memorial fountains symbolizing the buildings with the names of the victims and cascading water is a lovely and moving tribute. Remembering 9/11 may not be considered a “fun time”, but it’s something I felt was important to do.

Before my trip I had come across a restaurant on Instagram called Raclette and became obsessed and told Pat we had to go there. Here is why:

Yes, that is cheese. All over your food. (Or rather my table-neighbor’s food. I missed the shot for my food, but if you’d like to see it, here it is.)

And I realize, what you’re thinking. I was seeking balance on this trip. Trying my best to be healthy. And to that I would say that I had a healthy breakfast and a healthy lunch and walked almost five miles so I earned this very decadent dinner. Plus, look at all the protein I was getting! (And there’s some green stuff on the plate.) In other words: A lot of healthy + a little not-so-healthy = balance.

Raclette is small, so reservations are a must. The intimate and cozy restaurant has a European feel to it. And, yes, the food is as good as it looks. If you’re looking for a unique New York experience, and in your book (like in mine), cheese = happiness, then dinner at Raclette is mandatory. 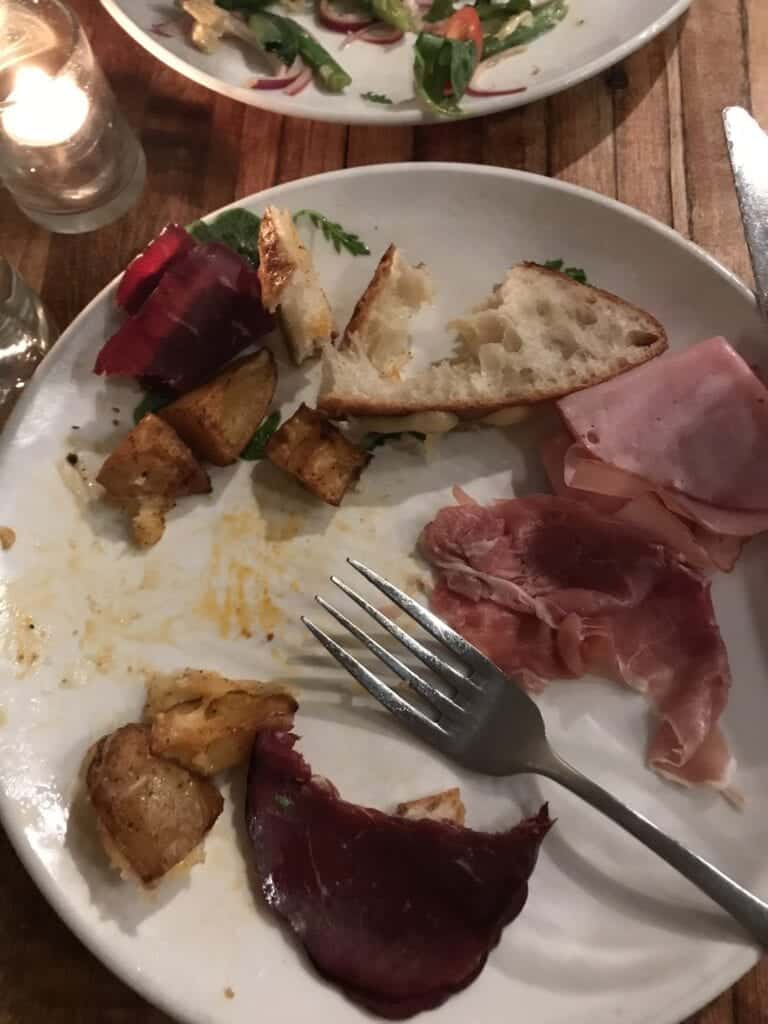 I had an eleven o’clock train to Philly on Monday morning, and had (more than) a bit of cheese to work off, so after my in-room workout I went for a Midtown run. Running through the hustle and bustle of a New York Monday morning was exhilarating. I loved seeing the school children in their different colored school uniforms heading to their bus stops and the business people dressed up and ready for work. (New Yorkers are such snappy dressers.) Such a different energy from my (semi) daily run through my suburban neighborhood. 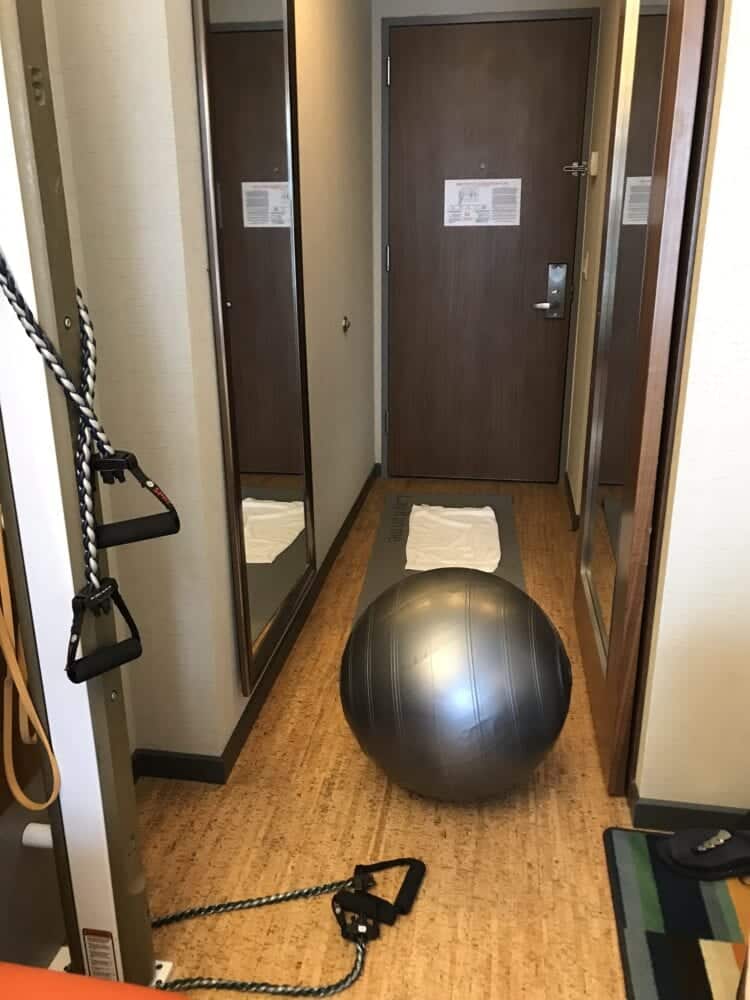 After my run I enjoyed another healthy breakfast on the 2nd floor patio of my hotel before checking out. My stay in New York may not have been the extreme overindulgence of my youth (okay, I may have overindulged a bit on the cheese), but I felt good about it. I looked at a museum in a whole new way. I ate delicious food that was a fairly even balance of healthy and unhealthy. I was careful not to spend too much money, but knew when to splurge. And I actually used the workout clothes I packed in my suitcase more than once. It felt balanced. And just right. 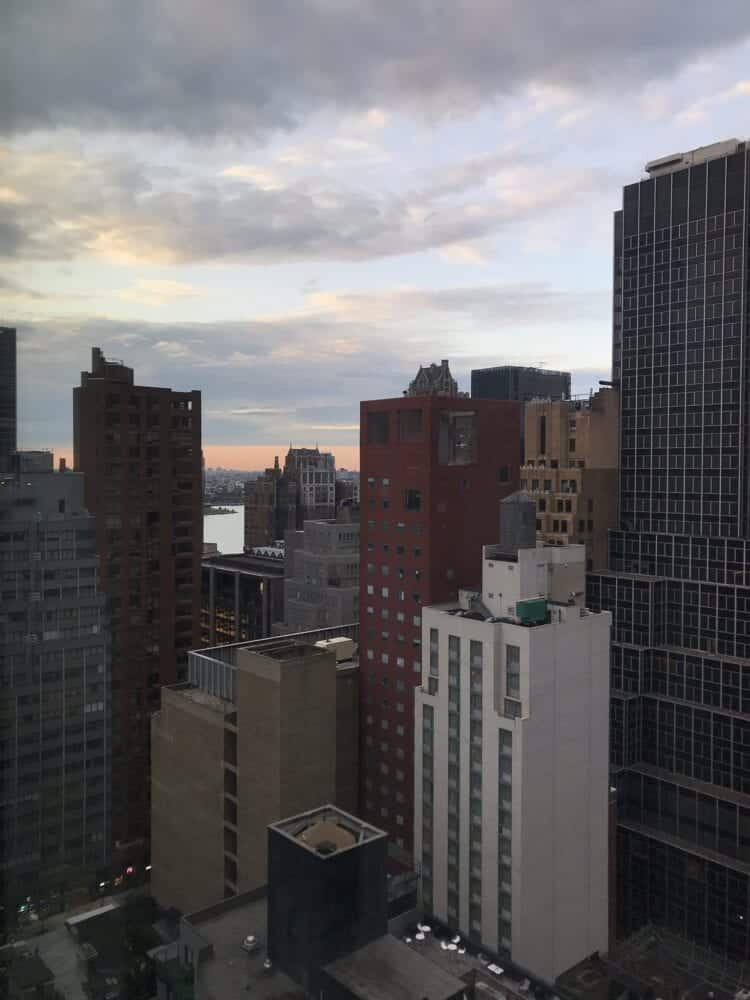