A Guide to Family Friendly Columbus 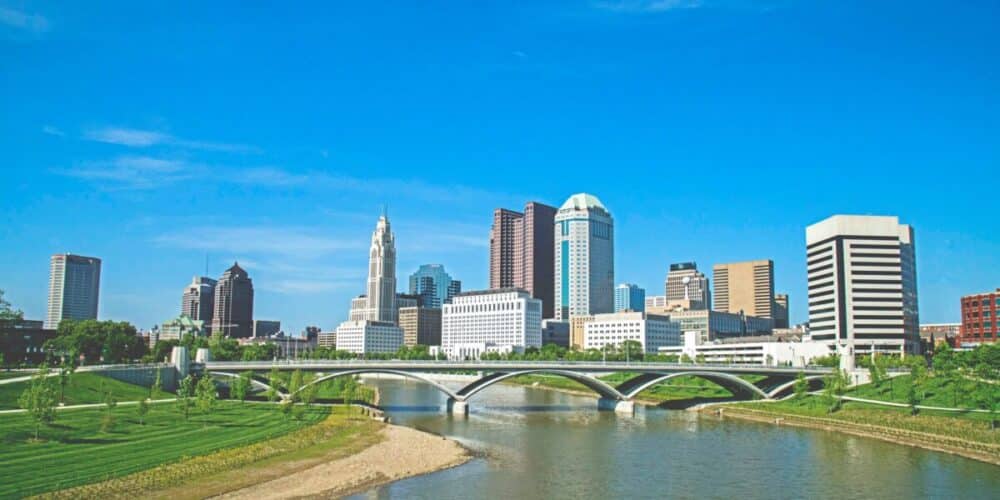 Columbus, Ohio is home to so much more than Jack Hanna’s Award-Winning Zoo and Ohio State Football. Fun things to do in Columbus, OH include food, festivals and even a boozy river!

Columbus lies in the center of Ohio. Columbus is surrounded by suburbs, many of which have their own cool attractions.  It’s a big, bustling city, at least by Midwest standards! 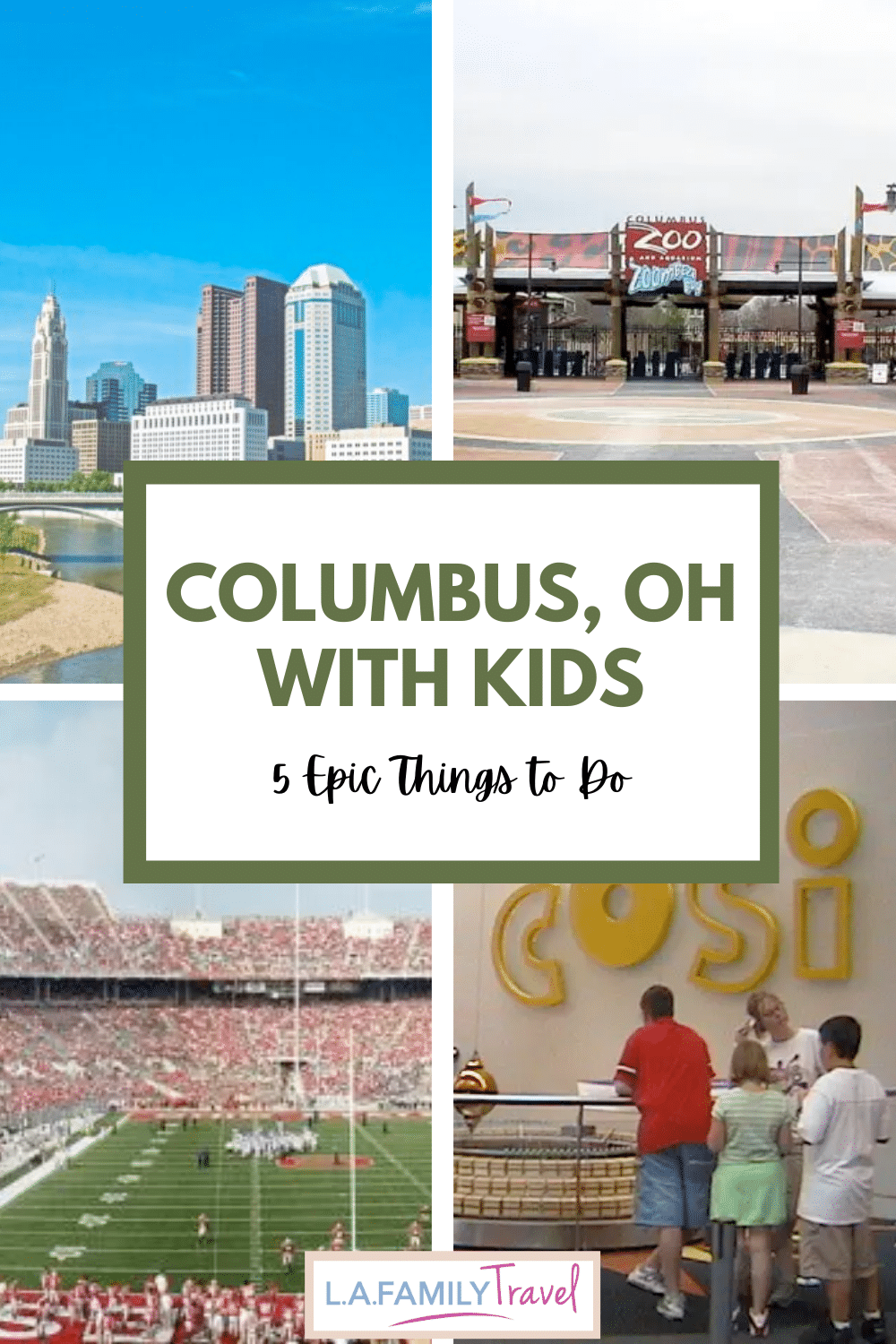 The Marching Band at Ohio State, lovingly called “The Best Damn Band in The Land” is perhaps as famous as the football team. Photo Courtesy of Joe Bengo at Wikimedia.

Ohio State University is perhaps for what Columbus is best known. Ohio State is home to a whopping 62,000 students! Parts of Columbus feel downright empty during the summer without all the students running around. Every Saturday, in the fall, downtown Columbus is packed with Ohio State Buckeye fans ready to cheer on both the football team and the marching band.

The Buckeyes are named for the Ohio state nut, which is poisonous, by the way. However, the chocolate and peanut butter version, sold around town, should be fine. 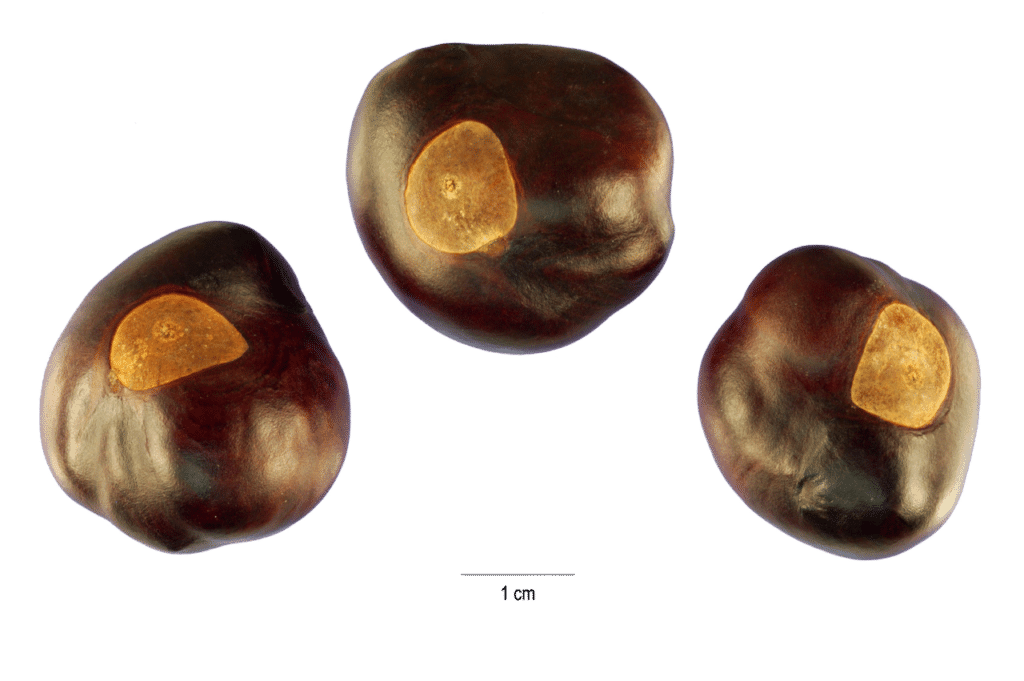 If you find these laying around, don’t eat them! If you find the candy version, eat as many as you can! Photo courtesy of Wikimedia

Ohio Stadium, lovingly called “The Shoe” holds almost 100,000 fans! I grew up 3 hours from Columbus, but we were still glued to the TV every week. Ohio State is a big part of the Ohio ethos. Two unique parts of Ohio State culture have permeated Columbus and to a certain degree, the rest of Ohio. First, a healthy dislike of Michigan. If you happen to visit anywhere near the Ohio State vs. Michigan game, you’ll find many of the M’s around town crossed out. Babies born in Columbus during “Xichigan” week even get special “Beat Xichigan” blankets. Second, if anyone should happen to call out O-H to you, the proper response is I-O. If you really want to fit in with the locals, you can join in on spelling out O-H-I-O “YMCA” style. 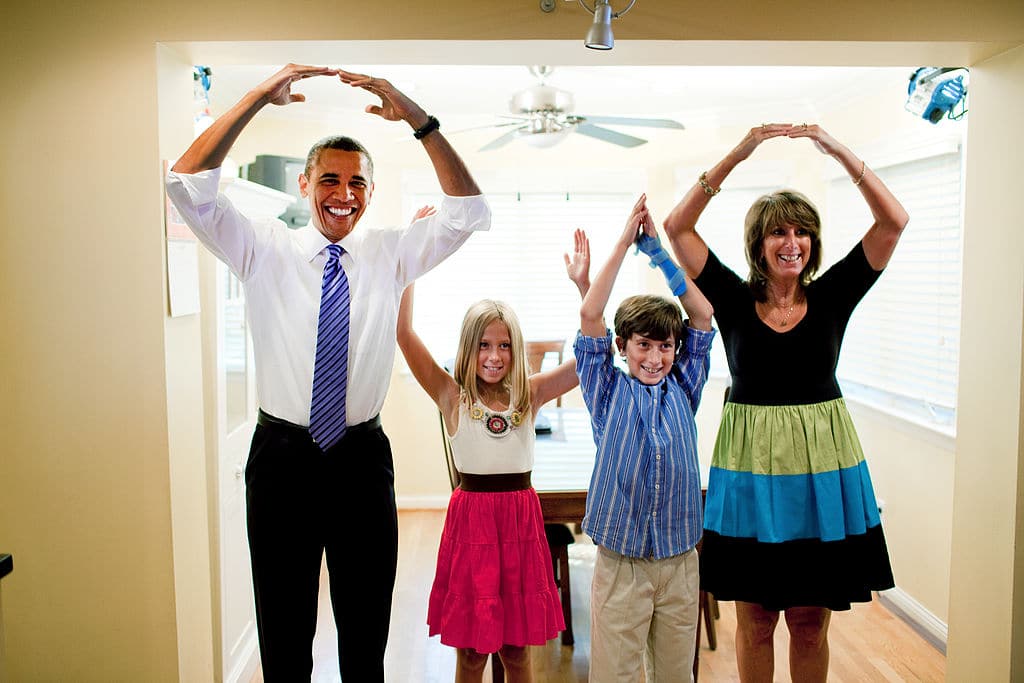 Even President Obama joined in when he visited Columbus. Photo Courtesy of Pete Souza and part of the public domain. 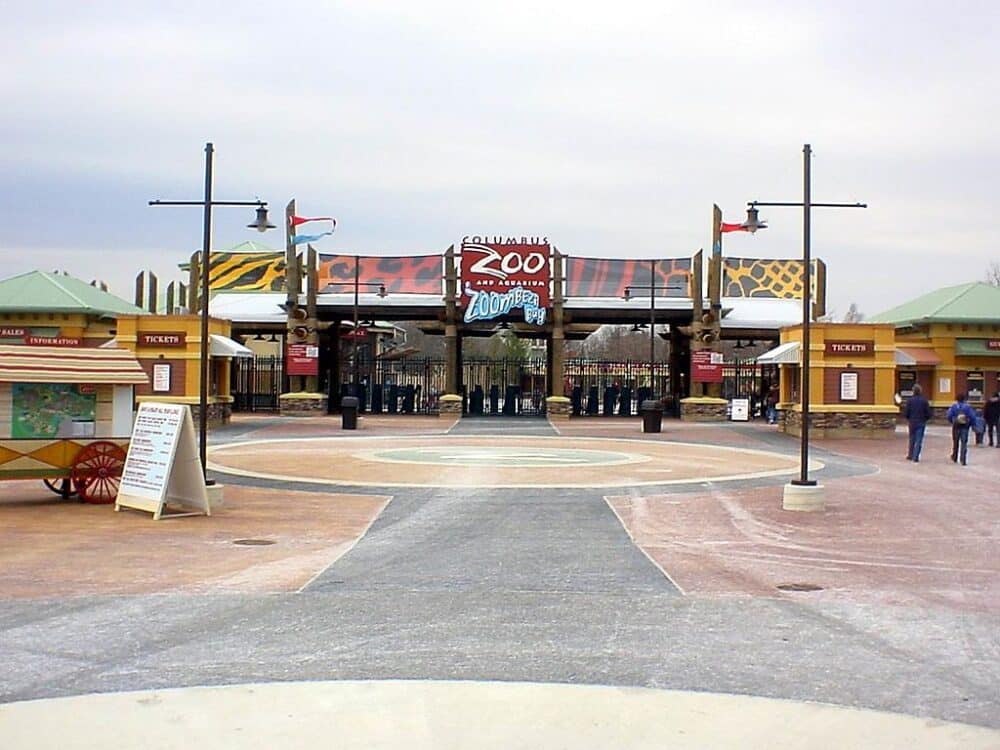 The Columbus Zoo is perhaps best known for being the home of Jack Hanna rather than what it should be known for, the 21+ only lazy river. Photo courtesy of Adolphus at Wikimedia.

The Columbus Zoo is a world-famous zoo for one main reason: Jack Hanna. Yep, the guy that’s always schlepping animals through the late-night talk show circuit is from Ohio! The Zoo is huge, with exhibits dedicated to Australia, Asia, North America, and Africa. If you want to see everything, you will definitely need a full day. My sister loves the polar bear exhibit the best because you can walk under the exhibit and watch the polar bears from below.

Don’t Miss! The Los Angeles Zoo: A Walk on the Wild Side

Right next to the Zoo is Zoombezi Bay, a waterpark. Zoombezi Bay has several waterslides and pools for the kids to enjoy. It’s a nice waterpark, and I think most families will be able to find something to do. But, and I cannot stress this enough, Zoombezi Bay has an adults-only area called “Croctail Creek.” You can take an adult beverage with you and just float around on this lazy river. It’s heaven. Trust me, you need to go. Pawn the kids off on their other parent or their grandparents and go! 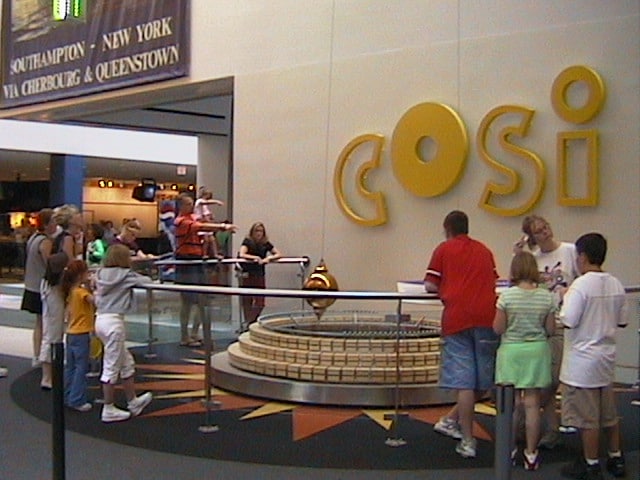 This foucault pendulum greets you as you enter COSI. Photo Courtesy of Brant Jones via Wikimedia.

COSI, or the Center of Science and Industry, is a large science center featuring dinosaurs, live shows, and even a planetarium. Everyone I know who has taken their kids to COSI has absolutely raved about it. COSI is huge, so you should definitely plan to spend a lot of time there, especially if your kids are science buffs.

Pro Tip: Teachers get into COSI for free. Discount tickets are available at area AAAs for members.

Every year on the 4th of July Columbus hosts Red White and Boom, the Midwest’s largest fireworks show. If you want to attend, make sure you are downtown early. Traffic is a nightmare. Most of my friends in Columbus get hotels downtown for Red White and Boom so they don’t have to try to drive that day.

In August of every year, the Ohio State Fair is held in Columbus. The fair typically attracts around a million people to the Columbus area. The State Fair features rides, concerts, animal exhibitions and a butter sculpture. The fair also features over 200 food vendors. If it can be fried, someone at the fair is frying it. You can even get deep fried butter, deep fried candy bars, deep fried cookie dough and deep fried cheesecake. The fair is not the place to go if you are watching your cholesterol. (Although there are healthier options, I promise).

Columbus has so much more than just a world-famous zoo! Check out the best places in Columbus to visit with kids.

The easiest way to get to Columbus from Southern California is to fly into John Glenn Columbus International Airport. From there you can rent a car if you want, although Uber’s are easy to get in the Columbus area. Columbus has a robust public bus system called COTA and a bike rental service called CoGo. If you can’t find a flight into Columbus, you could fly into Cincinnati or Cleveland, and drive to Columbus. It’s about a 2-hour drive either way.

While in Columbus you need to try Jeni’s Ice Cream. Jeni’s doesn’t use any artificial flavors or dyes. My husband recommends the S’mores flavor, but I like the mint chocolate chip better. If you’re in the mood for pizza, check out Late Night Slice. It’s the best pizza I have ever eaten. True to their name, Late Night Slice is open until 3 am!  Melt Bar and Grilled is an Ohio favorite, they have 2 locations in Columbus. Don’t let the word “bar” scare you, Melt is very family-friendly. Melt serves up gourmet grilled cheese, mac and cheese, burgers and so much more.

I’m a big fan of The Sheraton Suites outside Columbus for a budget stay ($70-100 a night). It’s clean, it has an indoor and outdoor pool, and I once stayed there for 5 weeks straight while in Travel Agent school, so now it has a nostalgia factor for me! The Blackwell is a nice hotel right in the heart of downtown, they even offer rooms with a view of Ohio Stadium. ($125-150). Le Meridien is in the heart of the Short North district, Columbus’s trendiest neighborhood. ($200-250) 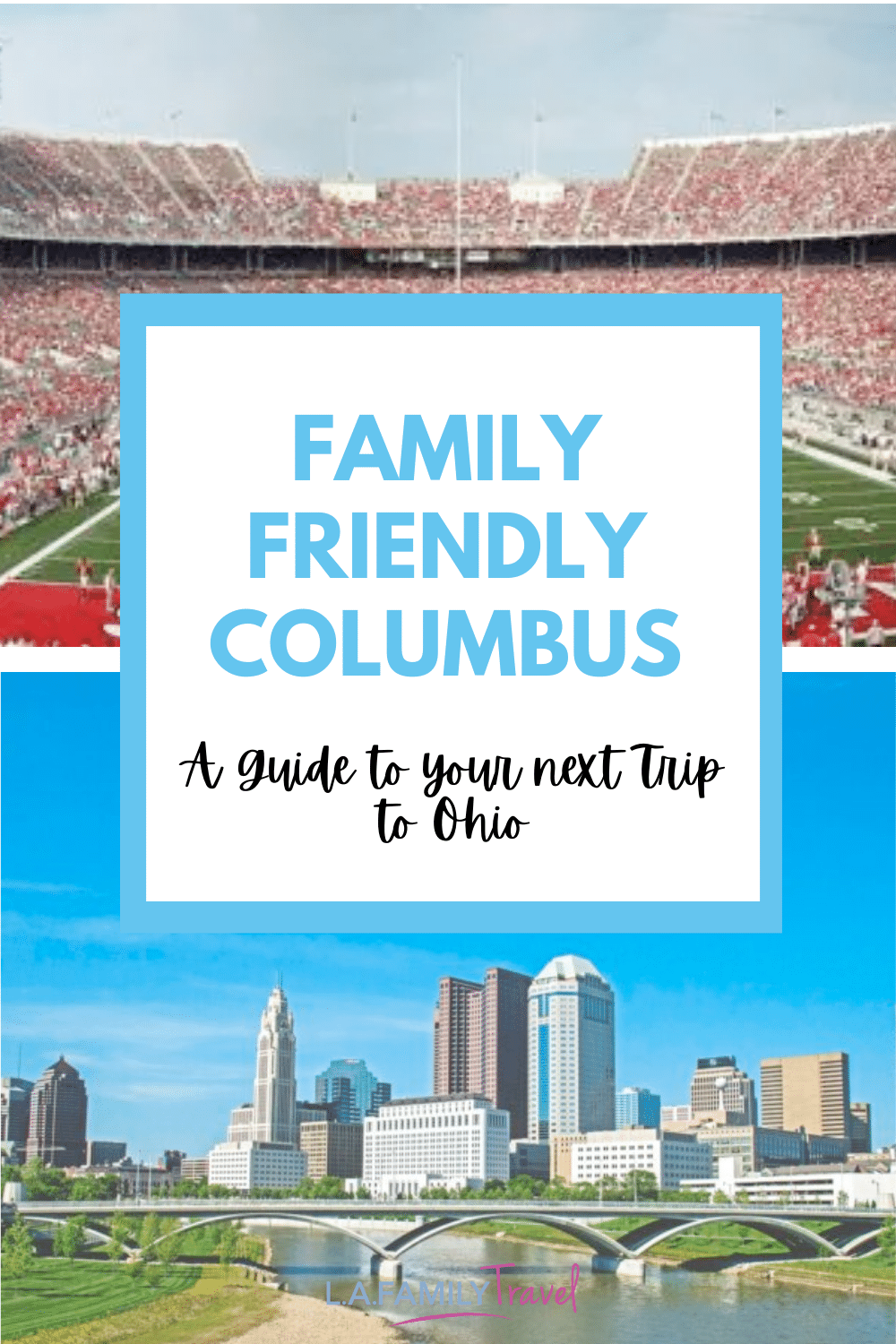 Emily Householder Stacey is a mom and travel agent based in Sunny Cleveland Ohio. When she isn’t writing or chasing her toddler, you’ll find her eating as many buckeye candies as she can manage.