Behind the Scenes at Disney: An Invitation to Explore 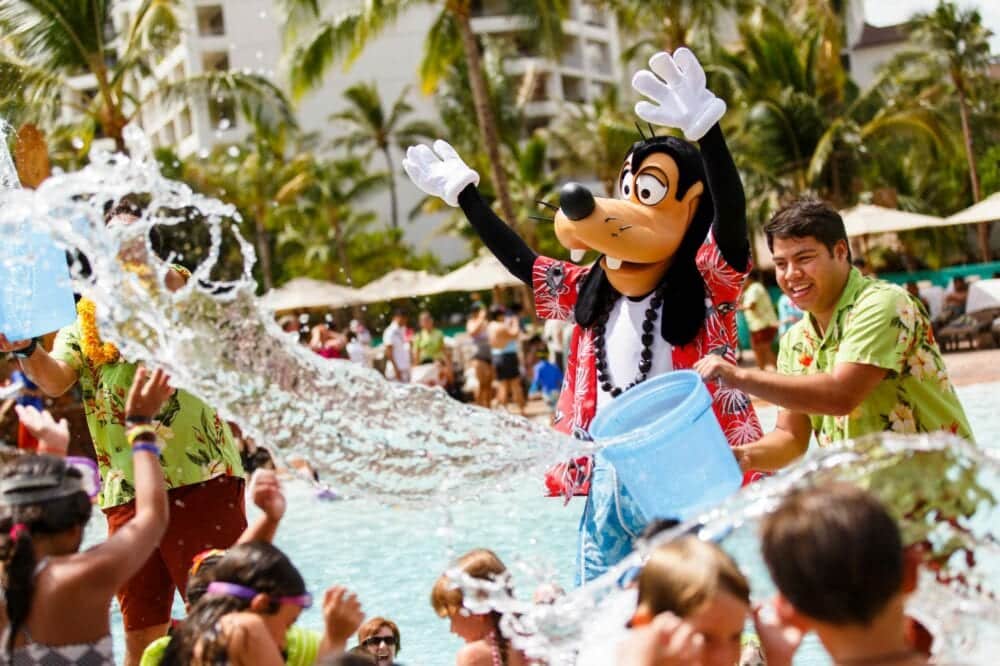 We all expect a visit to a Disney theme park to be an escape from reality – and, let’s face it, that’s what we love about it – but as theme parklands and attractions get more interactive and immersive, it’s also become more challenging for parents to gauge whether the experience will be too much for their kids, especially kids who are young, easily scared, and/or sensitive to their surroundings. 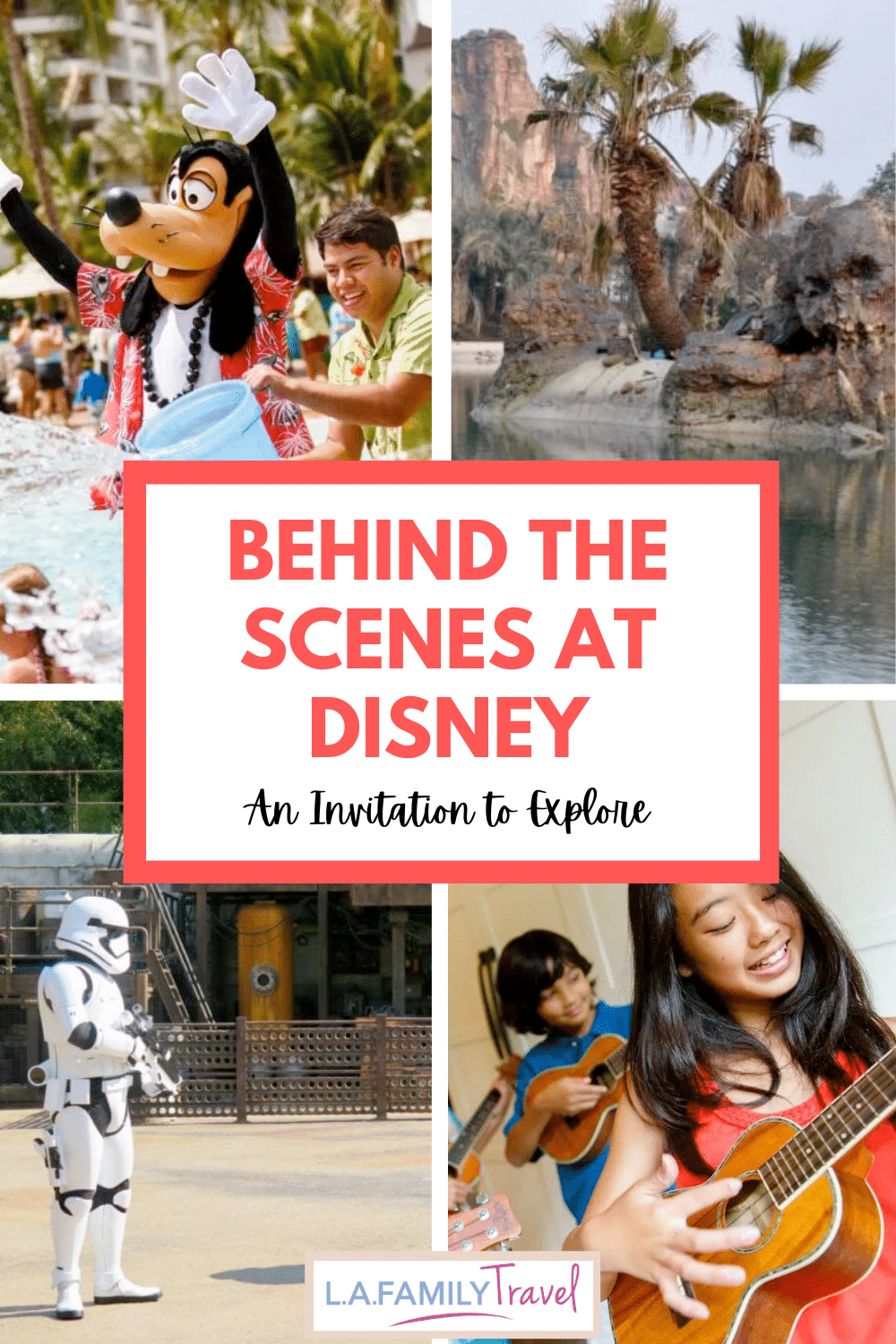 When Disneyland opened in 1955, Walt Disney intended the park to be a place where families could do things together, as opposed to other amusement parks at the time where the children rode the rides and the parents just watched. 60 years ago, Walt’s focus was to tell stories that resonated with his guests and not necessarily to create experiences that were immersive and interactive, but as Disney storytelling evolved, so did technology, and what started as developing a storyline for one attraction became developing a storyline for a land (like Frontierland or Adventureland), and from there – with the help of further advancements in technology combined with more sophisticated park goers – creating a storyline for an entire theme park world.

At a panel called “Immersive Worlds: Bringing Stories to Life in Disney Parks” during Disney’s D23 Expo 2019 – a fan-focused event that takes place every two years in Anaheim – four of Disney’s top Imagineers take visitors behind the scenes for Disney Parks. They discussed how they approach creating interactive worlds that are immersive but not intimidating. The panel, moderated by Joe Rohde, Senior VP Creative for Walt Disney Imagineering who led the team that designed Pandora – World of Avatar also included Jeanette Lomboy, VP at Walt Disney Imagineering who oversaw Aulani, a Disney Resort & Spa; Luc Mayrand, VP and Creative Portfolio Executive for Walt Disney Imagineering who oversaw the creation of Pirates of the Caribbean – Battle for the Sunken Treasure and Treasure Cove at Shanghai Disneyland; and Scott Trowbridge, Portfolio Creative Executive who oversaw Star Wars: Galaxy’s Edge in California and Florida.

Long before families set foot into Disney’s immersive worlds, Imagineers have already taken into account what their preconceived notions might be – regardless of whether those notions are accurate or not.

In the case of Aulani, families are being immersed in a world that’s real, so the immersion is not intended to introduce people to an imaginary place, but to offer more detailed information about a real place. Lomboy pointed out that many people who visit Hawaii have ideas about the destination based on what they’ve seen on television or in the movies, but she says, preconceived notions about the Hawaiian culture are not always right, so Disney Imagineers knew they needed to create a place where they were telling the accurate Hawaiian story. 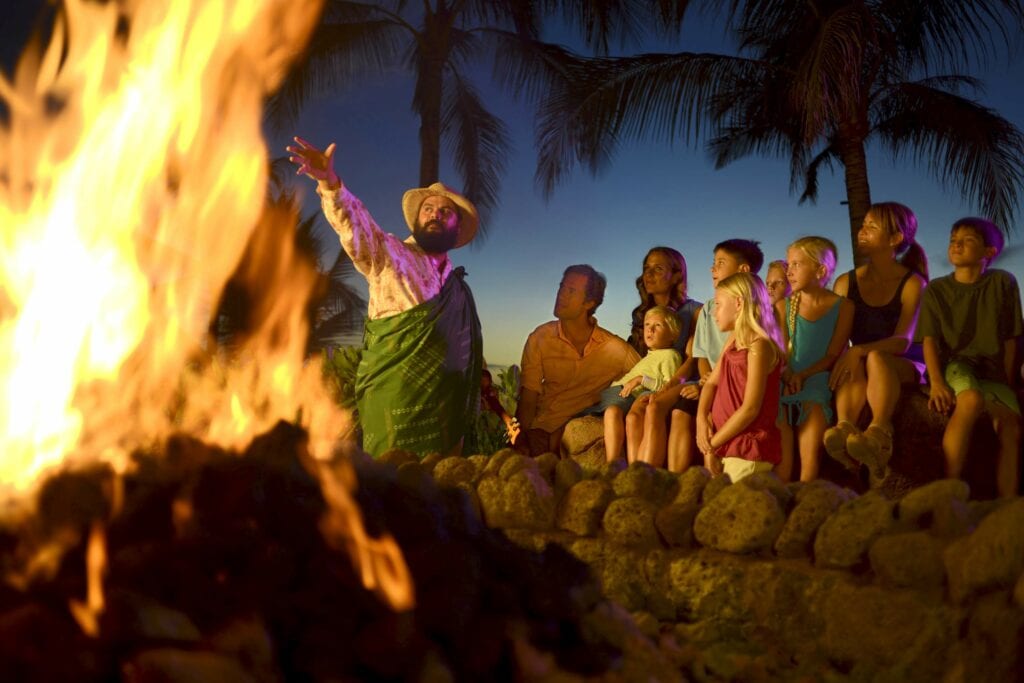 Learn how Disney’s Imagineers create interactive worlds that are immersive, believable, and magical for kids and adults.

Click To Tweet
I always say that Disney was the blank canvas, and the native Hawaiian culture was the paint,” Lomboy said. “When our guests walk in the door, we want them to know that this is a world, and it’s about real things and real subject matter, but we’re giving them more than they expected.

People might also come into imagined lands with some information about the story, so the goal for creating those worlds becomes integrating the information people already have into the way those stories are told, rather than correcting misconceptions. For example, when Imagineers created Treasure Cove, Maynard said they considered several sources of information since the Pirates of the Caribbean story is partially based in the real world, is partially imagined, and in the case of this specific world, it’s even partially newly-imagined. Then, all those sources were combined to celebrate the things people have seen before while also introducing new experiences. 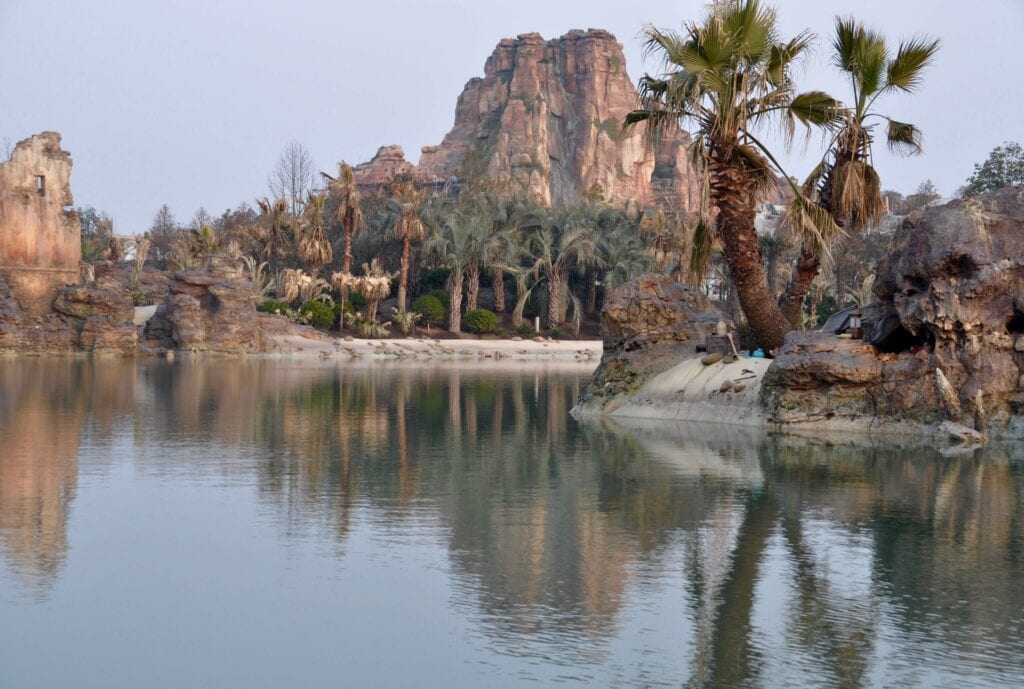 When Imagineers created Treasure Cove, they added layers of fantasy to Pirates of the Caribbean  – Photo by Shanghai Disneyland

With Disney’s Pirates of the Caribbean, the world is real, and it’s magic at the same time, and it’s scary, but it’s funny at the same time,” Maynard said. “We couldn’t put all these things everywhere in the world at all times, so the main ride is more scary and magic, but the stunt show is much more real and funny.

Don’t Miss Disney For Adults: How to Re-Light That Spark 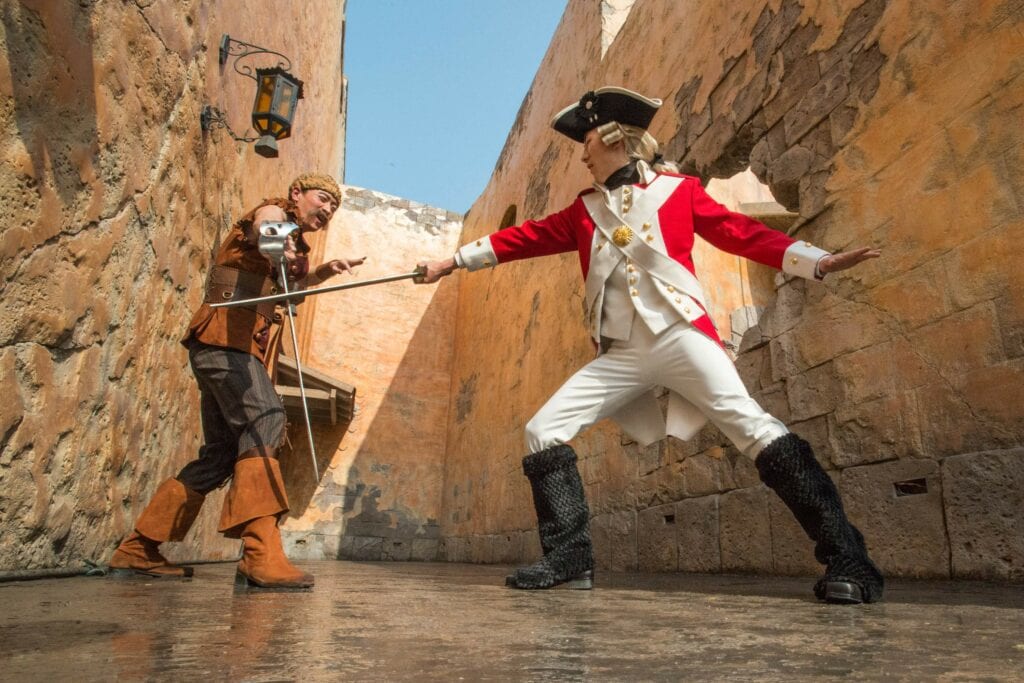 Pirates of the Caribbean: all the feels! – Photo by Shanghai Disneyland

An Invitation; Not an Obligation

Another critical aspect of creating any Disney world is determining how to let people know who they are in this world – and, more importantly, what is expected of them. Unlike a “haunted” experience where everyone is entering with the knowledge that they are going to be scared (and in theory, they agree to that in advance), when a family visits a Disney theme park, they do not necessarily agree to be an active participant in the experience (and in most cases, are definitely not agreeing to be scared or intimidated by it). 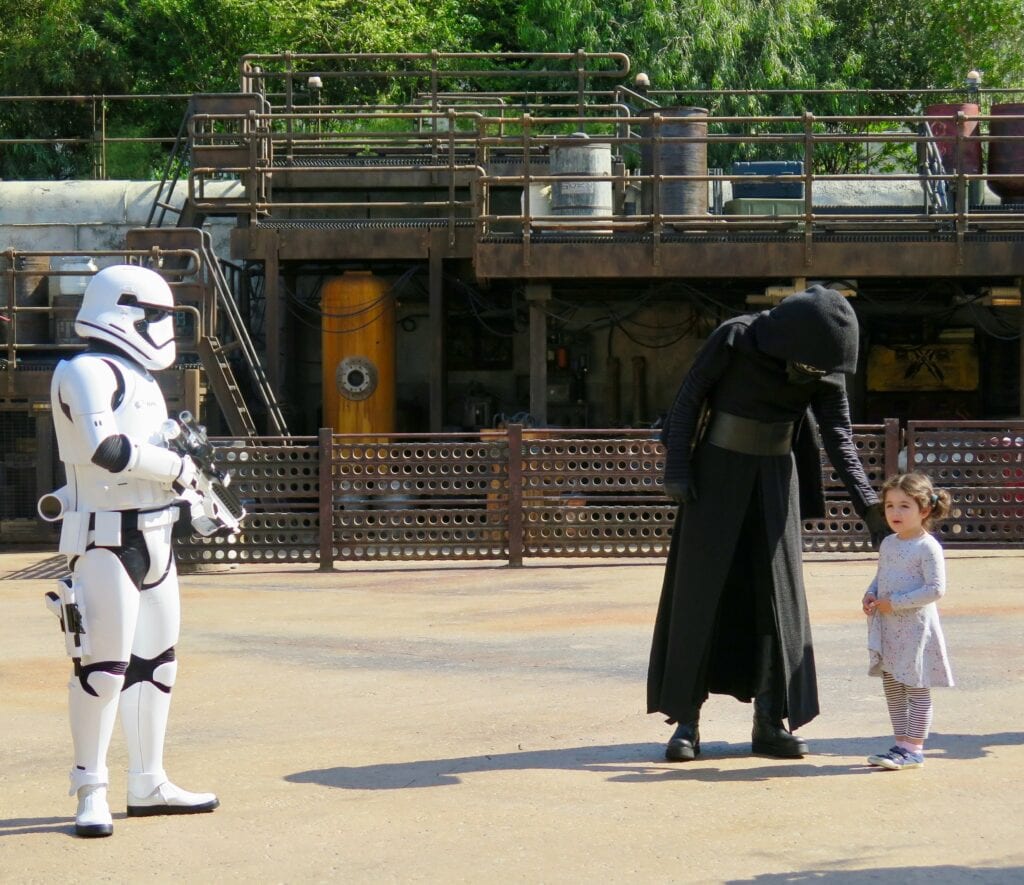 Kids can play along with the story in Galaxy’s Edge, but they know that everything is safe – © Samantha Davis-Friedman

Rohde described the process as “the solicitation to be involved” and noted that Imagineers know that people need different levels – especially kids – and that everyone needs to be able to “seat themselves” where they want to be in a land so they can comfortably engage in it.

“With Animal Kingdom, we’re always are assuming that you are you, it is today, but you are not home,” Rohde explained. “We generally don’t ask people to make a very big transit, so in the case of Pandora, they get that it’s safe to be there, they’re not expected to do something they’re not prepared to do, but there will be opportunities to engage and to learn.” 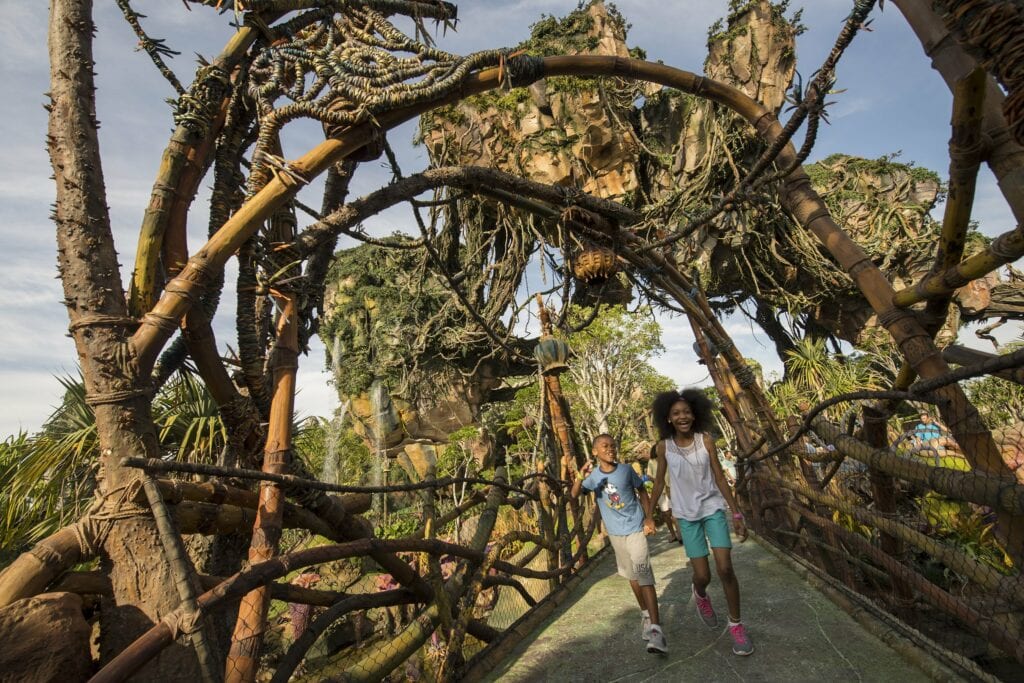 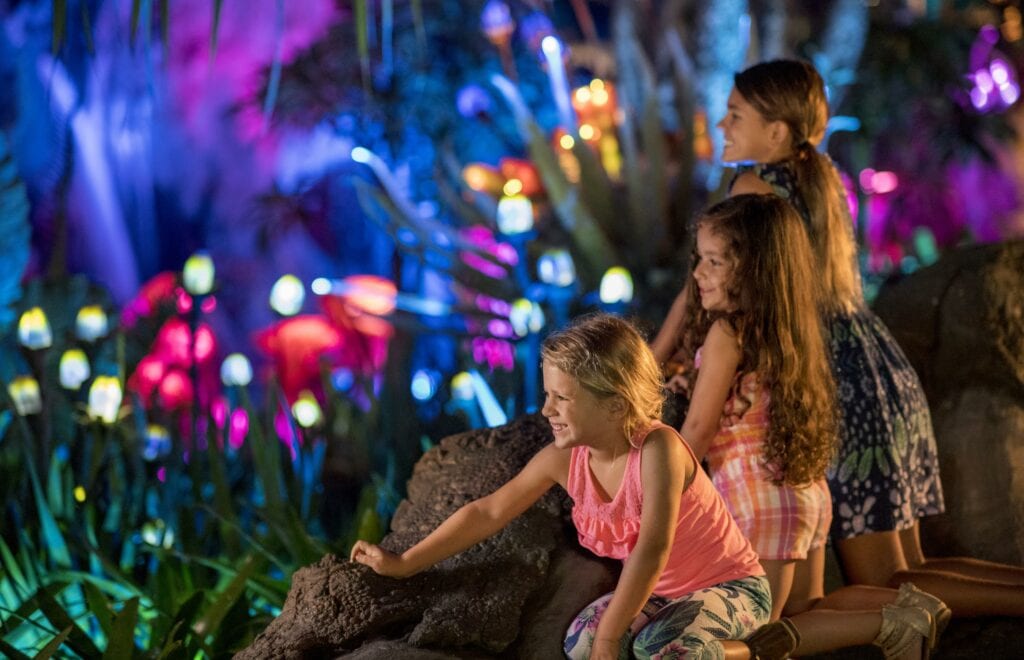 Trowbridge also noted that Imagineers aren’t necessarily increasing the level of reality, but they are increasing the level of believability in the story they’re presenting. In that way, park guests – and kids in particular – can play along with the story, but they know that everything is safe. Because of that, all four panelists agreed that it should always be an invitation to participate, but never an obligation. Plus, they said, even guests who are willing to be actively involved in a world, don’t all want to engage at the same level.

Trowbridge illustrated those levels in Galaxy’s Edge by saying that each person has the freedom to decide whether to talk to a character or take on a mission for the Resistance, but if they just want to hang out at the cantina “and watch the space world go by,” their Star Wars experience can be just as rewarding. Although the goal was to create story-driven immersion, guests can participate in that story as much (or as little) as they want. In that way, it’s totally okay for Star Wars-loving kids to brandish lightsabers at passing stormtroopers, but it’s equally okay not to. 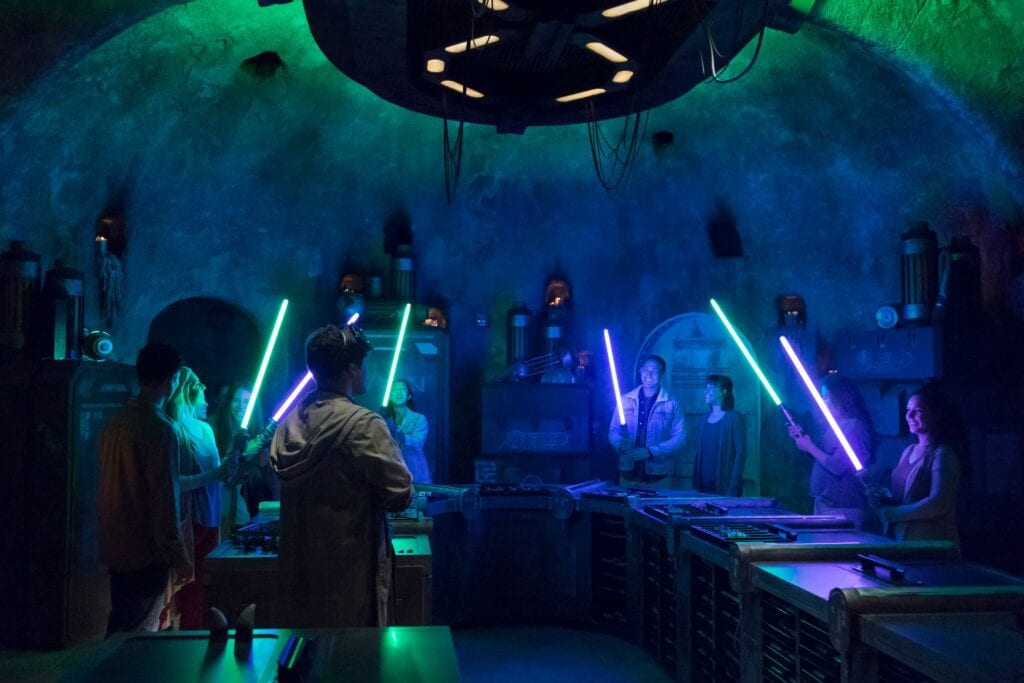 In Galaxy’s Edge, young Jedi’s can build their own lightsabers and fight against the First Order – Photo by Joshua Sudock / Disneyland 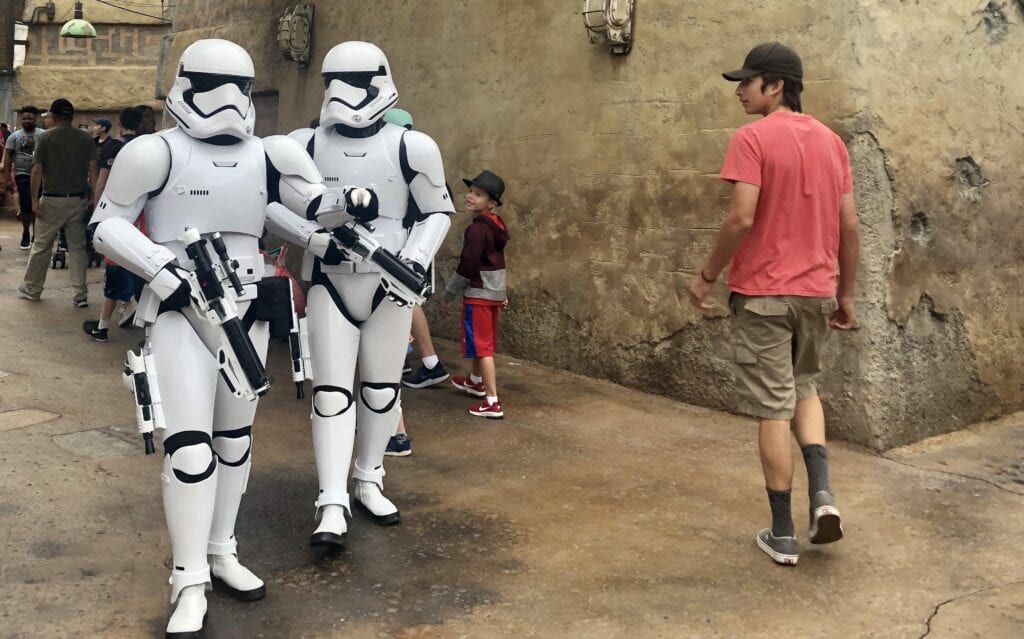 Imagineers don’t want anyone to be afraid, but they’re giving guests permission to play along – © Samantha Davis-Friedman

Crafting the experiences so you can engage with them when you want and at what level you want and with who you want is really important, so you never feel like you’ve got an obligation,” he said. “It can never be that kind of a situation where you’re saying, ‘Chewbacca needs me to deliver this part, Grandma, I’ll catch up with you later.’ –although you should always help the Wookie. 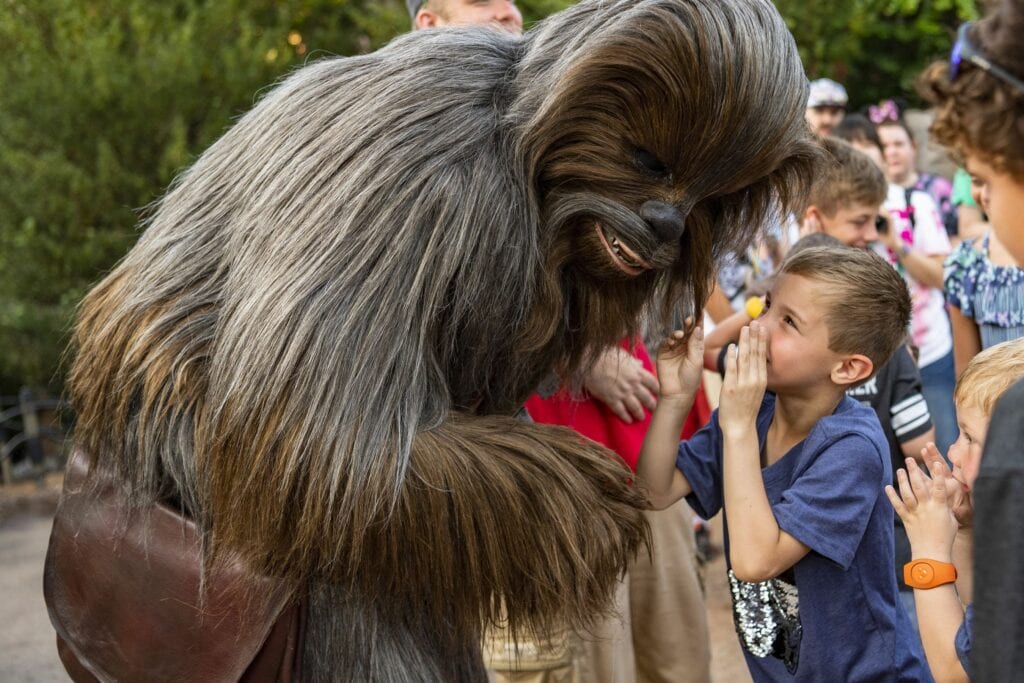 Plus, the Wookie is so cute! – Photo by Walt Disney World

Rohde describes it as a line between a world that seems to be real and the real world, and that line is what allows families to interact as opposed to being afraid or feeling threatened, Trowbridge notes that when kids go to Treasure Cove or Galaxy’s Edge, they should never worry about being kidnapped by pirates or storm troopers.

“We don’t want anyone to be worried about that,” he said. “But we’re [still] trying to immerse you into a believable story, so there are things that give you permission to play along.” 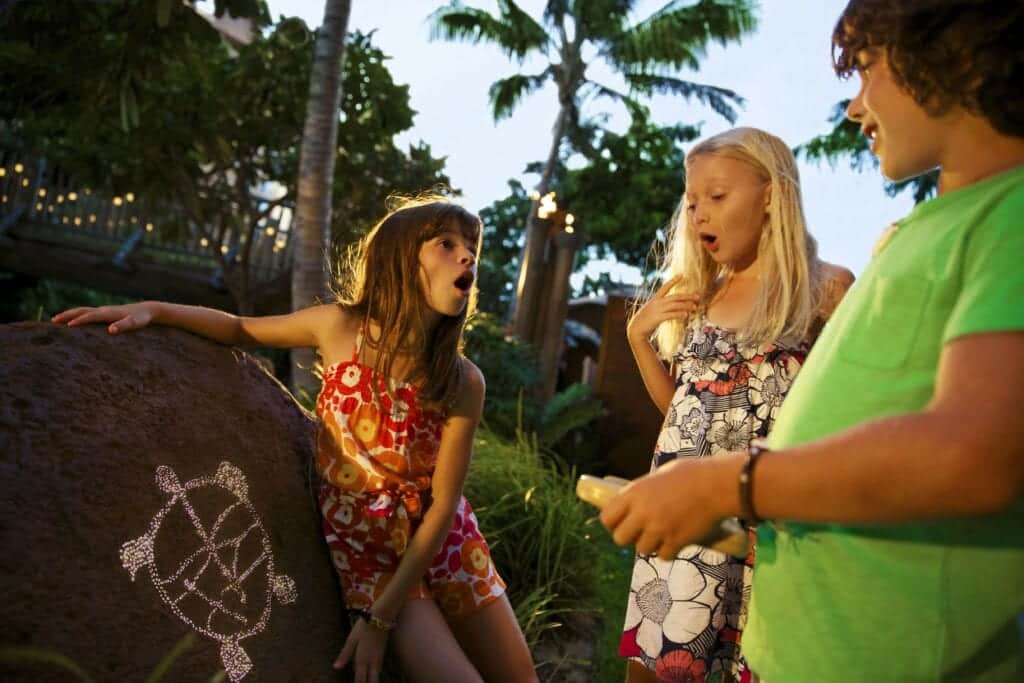 Imagineers went out of their way to inject Aulani with Disney storytelling elements – Photo by Aulani, A Disney Resort & Spa

For families who visit Aulani, the line between what seems to be real and the real world is very narrow because they are in Hawaii and not at a theme park version of Hawaii (which is why Disney characters at Aulani are also on a Hawaiian vacation). Nevertheless, Imagineers still went out of their way to inject the resort with Disney storytelling elements that invite guests to delve deeper into the Hawaiian culture through experiences like learning to hula or to play the ukulele. 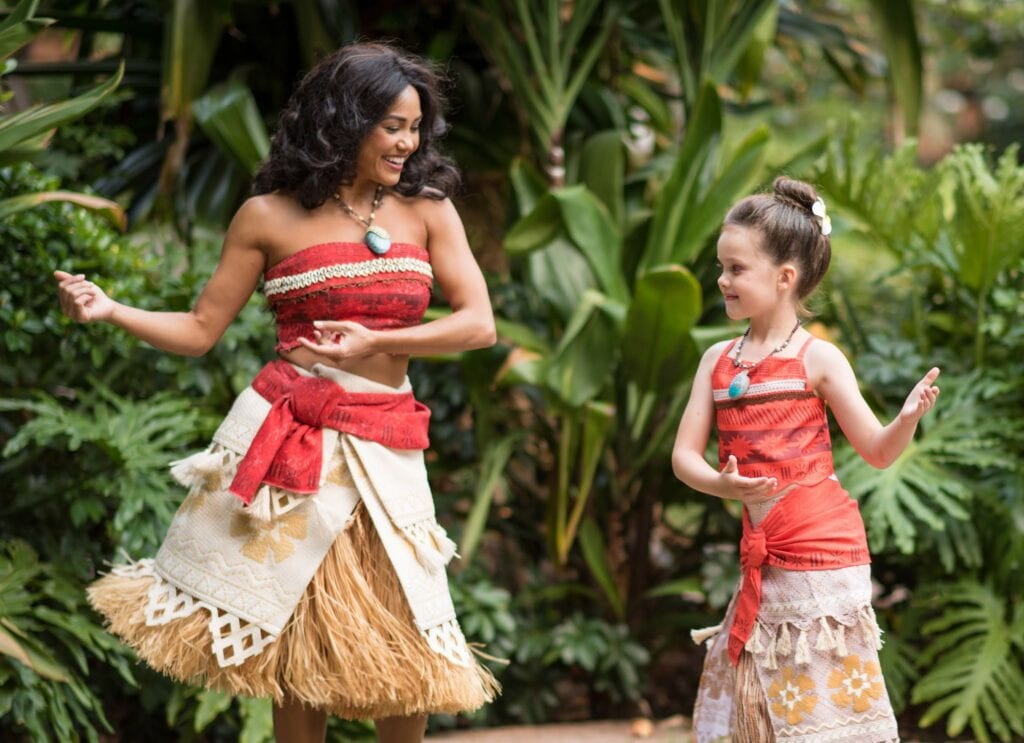 Kids can become immersed in Hawaiian culture at Aulani by dressing up as their favorite characters – Photo by Aulani, A Disney Resort & Spa 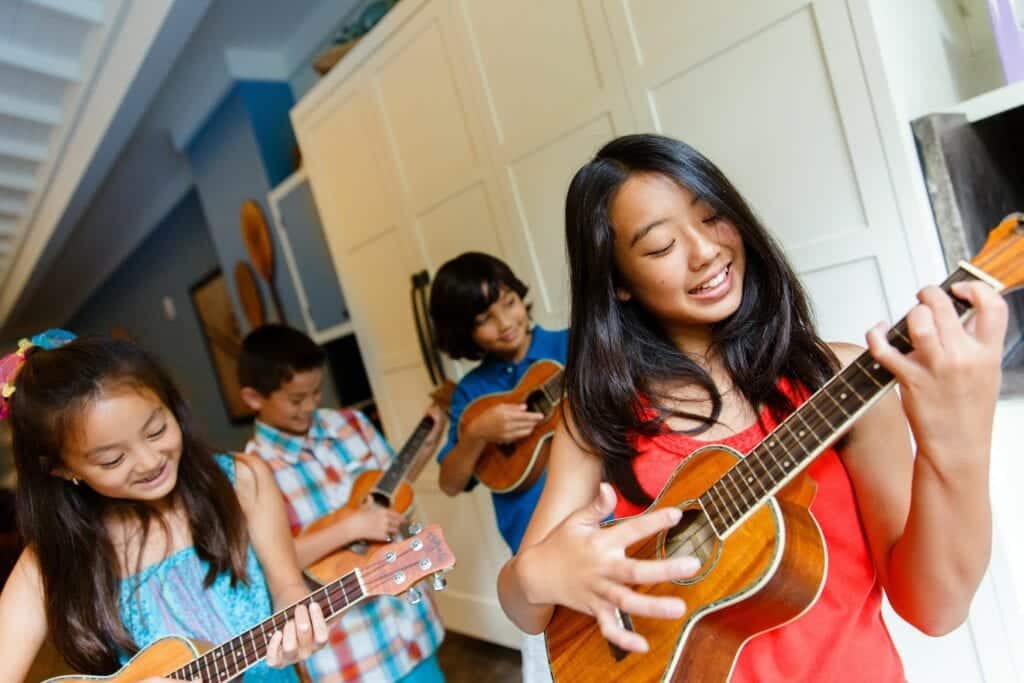 Kids can catch the Aloha spirit through experiences like learning to play the ukulele – Photo by Aulani, A Disney Resort & Spa

“The Hawaiian culture is embedded in every decision we made because we wanted to provide opportunities to ask questions that would enrich the ability to connect and learn more,” Lomboy said.

One of my favorite learning opportunities at Aulani is The Olelo Room. In this café and lounge, everything is labeled with its Hawaiian name, so kids (keiki) can learn how to say table (pakaukau) or chair (noho) while they’re enjoying their snacks (pupus). Plus, every cast member who works in the Olelo Room speaks Hawaiian, so guests can further immerse themselves in local culture by learning a few Hawaiian phrases to share with family and friends back home. 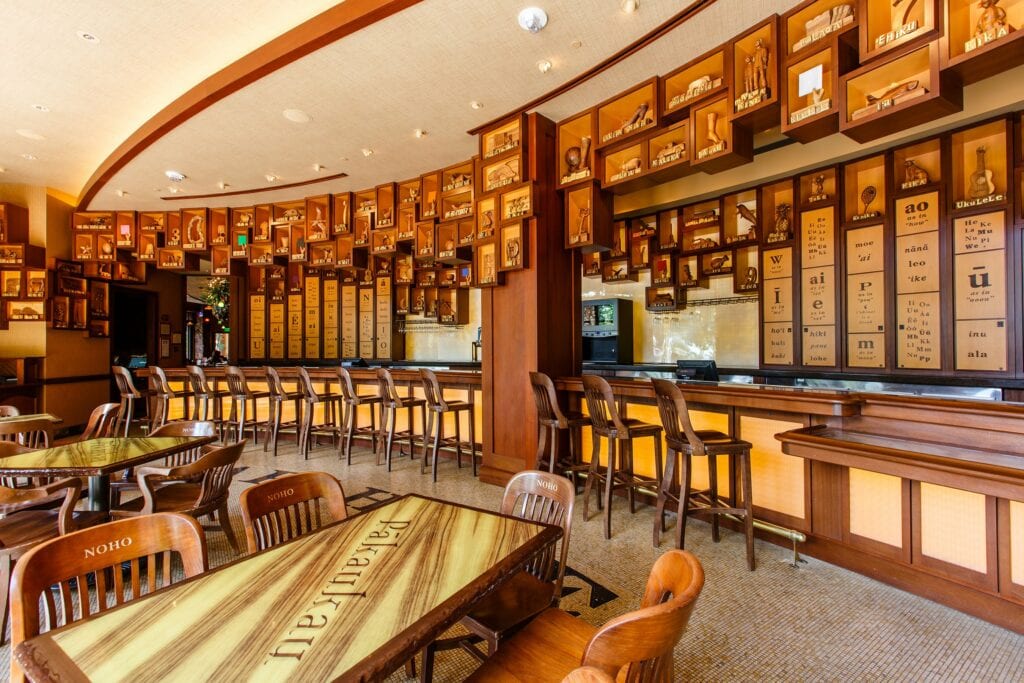 Everything in the Olelo Room is labeled with its Hawaiian name so kids can learn to speak Hawaiian – Photo by Aulani, A Disney Resort & Spa

“When Walt first built Disneyland, he wanted to create a place where guests felt transported, leaving their daily lives for a moment that was fantastical,” said Jeffrey Epstein, Director of Corporate Communications at The Walt Disney Company. “For more than 60 years, the incredible talents at Walt Disney Imagineering have continued to pioneer groundbreaking and innovative ways to immerse guests in new worlds. Whether riding on the back of a banshee or piloting the Millennium Falcon, enjoying an authentic Hawaiian luau or facing off against pirates in the ocean’s depths, Disney brings these worlds to life like no one else.” 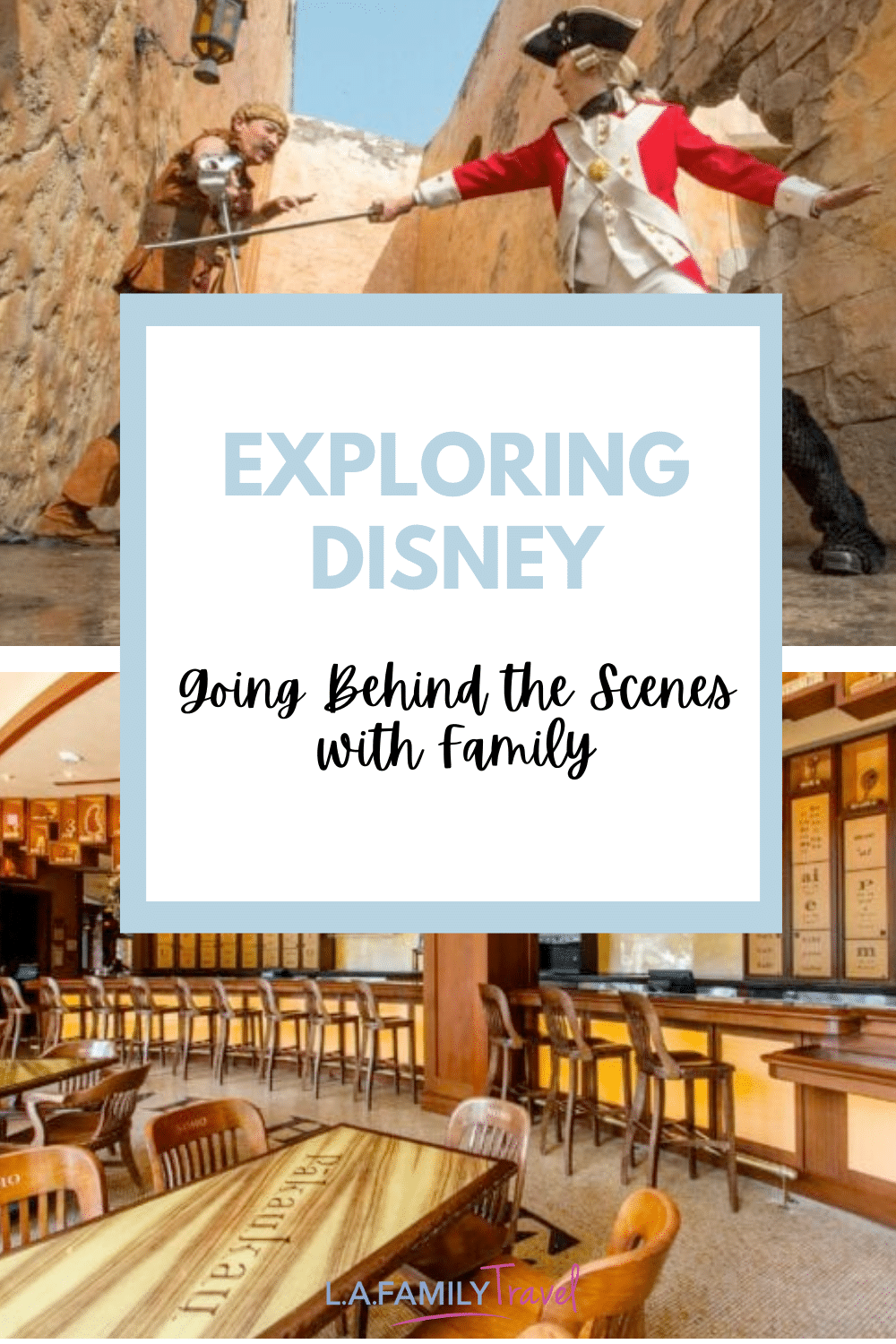