Adventures by Disney: A Behind The Scenes Disneyland Tour

I love Disneyland, so when my son and I were invited to experience the 4-day Adventures by Disney: Disneyland Resort and Southern California Escape, several behind-the-scenes Disneyland tours plus a Disneyland family vacation package, I was beyond excited. But even I could never imagine the amount of pixie dust that was about to be sprinkled upon us. 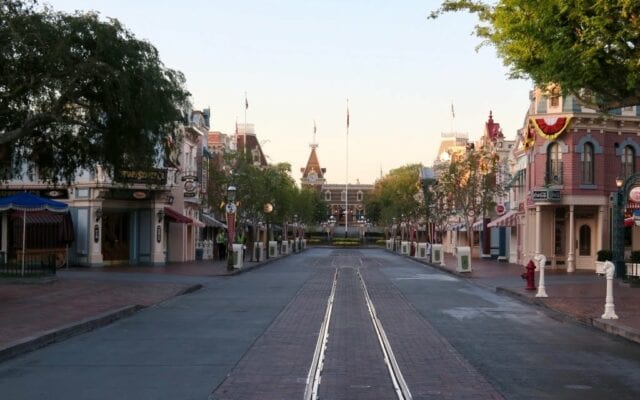 NO TIME TO ENJOY THIS NOW? PIN OR BOOKMARK THIS FOR LATER! 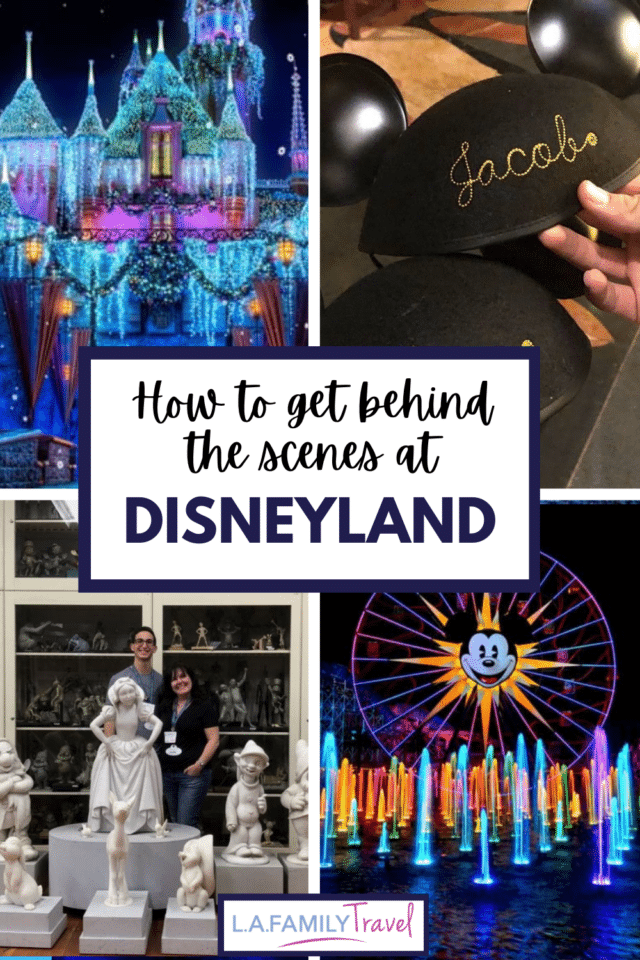 The magic started immediately upon arriving at Disney’s Grand California Hotel & Spa when Christian and Lori, our two amazing adventure guides, handed us Disneyland park-hopper tickets and then casually mentioned that they’d been pre-loaded with a few multi-experience FastPasses – which will now and forever be known in our family as “MagicPasses.” These special FastPasses allowed us to ride almost any attraction in Disneyland and California Adventure at any time, and most importantly, they didn’t prevent us from reserving additional timed FastPasses as we normally would.  It was minute one of the trip and we were already beyond excited about this Adventures by Disney perk.

That evening, we headed into Disneyland for dinner at Café Orleans in New Orleans Square where we capped off our delicious three-course meal with way more than a reasonable number of Mickey-shaped beignets (AKA New Orleans-style doughnuts). With a to-go box of beignets in hand, we then experienced the spectacular “Fantasmic” show from a special reserved section along the Rivers of America. And with that, we ended day one of what was already an extremely magical trip. 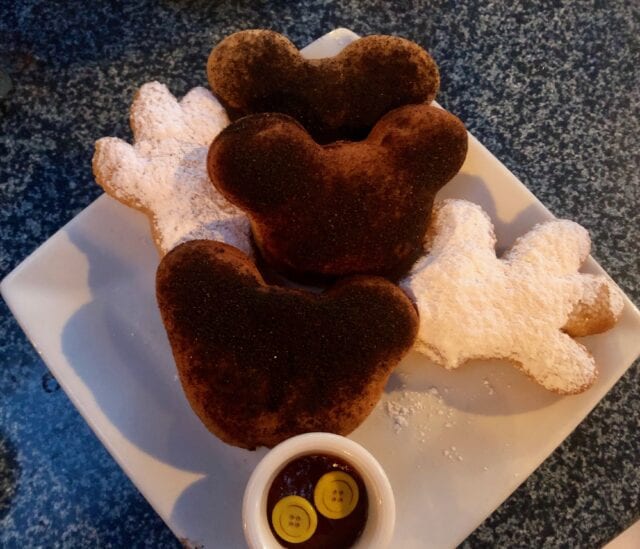 Day two began with breakfast in Grand Californian’s Storyteller’s Café with some Disney pals. Even though my 18-year-old has outgrown taking photos with characters, it was still fun to “chat” with Mickey, Minnie, and Chip and Dale during the meal. Dale even helped one of our tablemates with his morning emails. After that, we were on a coach heading to Burbank to visit Walt Disney Studios. 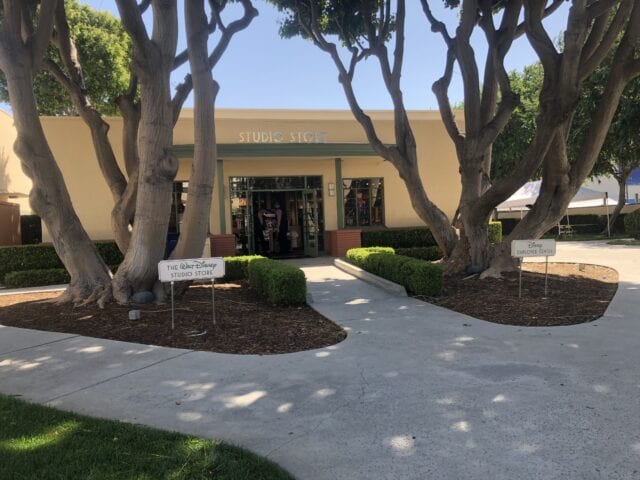 DON’T MISS! What to Expect from Star Wars: Rise of the Resistance

When we arrived, we were introduced to the second new word in our Disney vocabulary: Shopportunity. According to Lori, “You see it; you like it; you buy it.” And we did. After a spin ‘round the studio store, we were ready to see where Walt Disney and the original team of Imagineers worked on classic Disney animated films like Snow White, but also where they came up with ideas for Disneyland park. We even got to go inside the Disney Archives to see some of the iconic treasures kept there, including Walt Disney’s 1958 Academy Award for the Feature Documentary called “The White Wilderness” (which we got to hold), and a certain infamous redhead who recently “retired” from her role in the Pirates of the Caribbean attraction. We also had the chance to explore Legends Plaza, complete with a photo op with Mickey and Walt.

Our next stop was Walt Disney Imagineering, an opportunity only available to Adventures by Disney travelers because it’s not open to the public. Our guide, Imagineer Dave Fisher, explained how new attractions are developed using scale models as well as an extremely cool pre-visualization technology in the Digital Showroom – or DISH. We were able to stand inside the DISH ourselves and virtually “ride” the Radiator Springs Racers attraction from Disney California Adventure to see how Imagineers make sure attractions are perfect before they are actually built. In fact, Dave noted that Imagineers “rode” 30+ versions of Walt Disney World’s Slinky Dog Dash coaster in the DISH before settling on the final attraction. 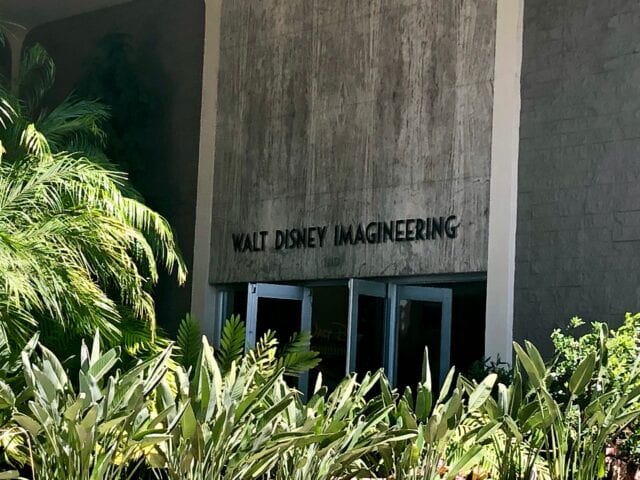 We also visited the Imagineering model shop, which was lined with floor-to-ceiling glass cases containing models for animatronic characters from attractions including Walt Disney World’s Hall of Presidents, the Haunted Mansion, and Pirates of the Caribbean (including the 3-D printed model of Johnny Depp for the Captain Jack Sparrow figure). We also posed for photos with the original marble statues of Snow White and the Seven Dwarfs from the grotto next to Sleeping Beauty’s Castle in Disneyland (spoiler alert: the ones in the park are replicas). 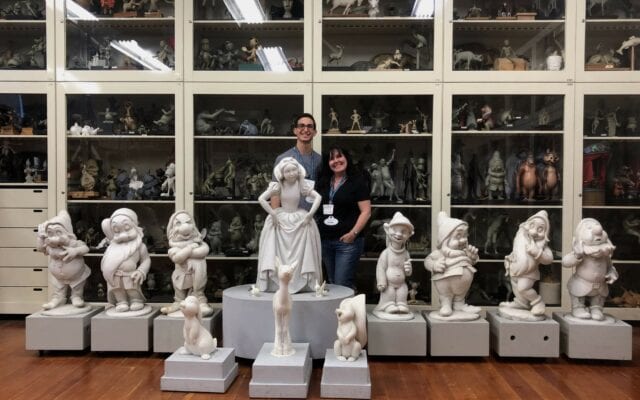 In the model room at Walt Disney Imagineering © Lori Coulis

On our way to the studio, Lori had given a crash course in Disney history, including the famous story about Walt taking his daughters to the carousel in Griffith Park. As we boarded the coach to go to dinner at the Tam O’Shanter (one of Walt Disney’s favorite restaurants and also the inspiration for Snow White’s cottage in the animated feature), Lori and Christian announced a surprise: We were not only going to the Griffith Park carousel, we would get to take a ride! Even my teen was pretty happy about that. 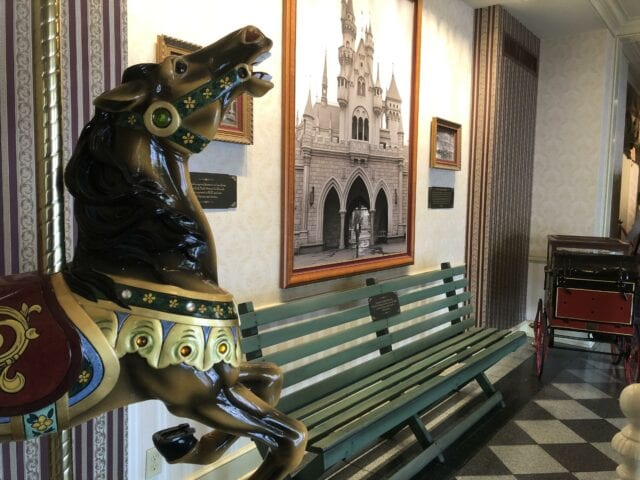 One of the three original Griffith Park benches © Lori Coulis

The carousel’s owner, Julio, said that every single thing on the carousel is still original from 1926, including all the horses. He also said the original park benches where Walt sat and dreamed of a place where parents and children could enjoy rides together were replaced, but that they’d managed to salvage three of them – one is in the Walt Disney Family Museum in San Francisco, one is in the lobby of the Great Moments with Mr. Lincoln attraction at Disneyland park, and the third was still at the carousel, right where it belonged. After a brisk 10mph ride (though the carousel can go up to a speedy 25mph), we headed to our delicious prime rib dinner at “The Tam” (there were also vegetarian options and kid-friendly items for pickier eaters). With our heads still reeling from all the amazing things we saw and learned, we returned to the Grand Californian in preparation for Day three in Disneyland.

We were up bright and early – like super early – for another character breakfast, this time at Disneyland’s Plaza Inn. But first, we had another magical Adventures by Disney exclusive experience. After being gifted with personalized mouse ears, we went into Disneyland before it was open and literally had Main Street, U.S.A entirely to ourselves. 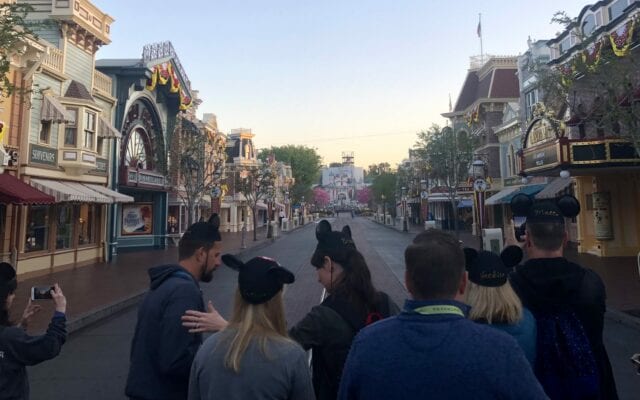 First ones in the park © Lori Coulis

Don’t Miss! Behind the Scenes Disney: An Invitation To Explore

It was amazing to be in the park just as it was waking up, and even the teens in our group agreed it was worth the early wake-up call. After a quick visit to the grotto to say hey to the replica Snow White and the Dwarfs, we enjoyed our meal with an eclectic assortment of Disney pals, including Rafiki, Winnie the Pooh, Captain Hook, and our old friends Chip and Dale. During breakfast, we also learned that the Plaza Inn was originally an 1890’s home in the Boyle Heights area of Los Angeles until Walt bought the house, had the front cut off and built the iconic Disneyland restaurant behind it. Who knew?

Don’t Miss! Cutting the Line: A How To Guide For Your Fav Theme Park 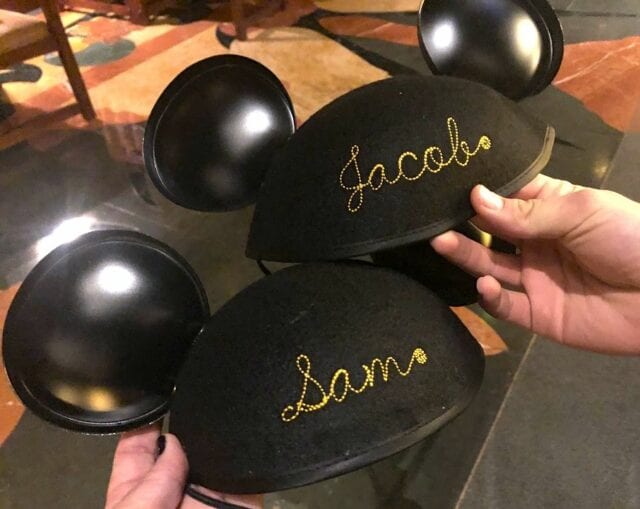 In case we get lost © Samantha Davis-Friedman

After breakfast, we rode three iconic Disneyland attractions (with no waiting): the Matterhorn, Peter Pan’s Flight, and of course, the carousel (which felt much slower after our spin in Griffith Park). At this point, it seemed impossible to top our private stroll down Main Street, but all of a sudden, we walked through Adventureland and right into the “backstage” area for the Indiana Jones ride. Mark, a Disneyland sound engineer, was waiting for us beside one of the massive ride vehicles. He explained how the jeeps were designed and how they work – he even gave us a little insider info about the letters and numbers on the back of each vehicle, which are actually initials and birthdates of Imagineers who created the attraction.

Fun Fact: One of the jeeps has George Lucas’ stats. It’s important to note that the only way to go backstage at Disneyland is with Adventures by Disney (unlike at Walt Disney World where backstage tours are available to anyone).

From Indiana Jones, we walked through the backstage area and popped out in Town Square where we were escorted into Walt’s private apartment above the Firehouse – another Adventures by Disney exclusive (and extremely magical) experience. Here, we learned that Walt and his family would stay in the apartment rather than driving back to Los Angeles after a long day in Disneyland. Walt’s grandson Christopher once said it was like going to sleep and waking up to see all your dreams have come true, and since seeing Walt’s apartment has been a longtime dream of mine, I understood exactly what he meant. 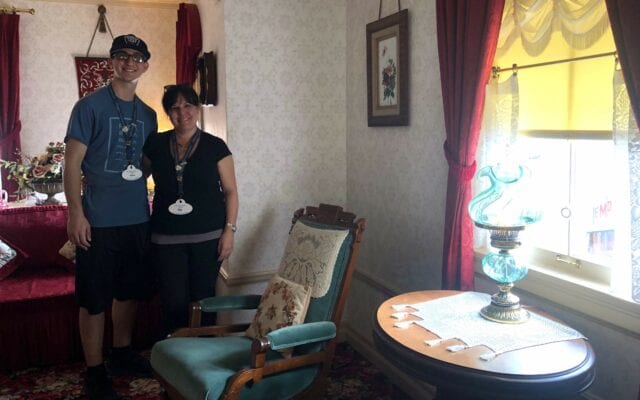 But the magic didn’t end there.

We crossed the esplanade to California Adventure Park, and once again, stepped backstage into the garage for Radiator Springs Racers. Kris, one of the ride’s mechanics, showed us how they monitor all the cars on the track at all times. He also told us that there are tiny hidden Mickey’s on the left tail light of each car, which were even tough to see close up. Then, we rode the ride – again, with no waiting – so we could compare the final product to the virtual version we experienced in the Imagineering DISH, which was pretty cool. But the last – and in my son’s opinion, the very coolest – exclusive backstage experience was at Soarin’ Around the World.

Adventures by Disney is the perfect Disneyland family vacation package with exclusive VIP behind the scenes perks and experiences. 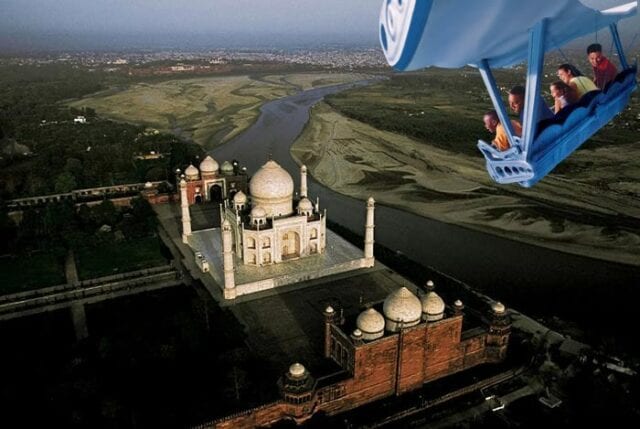 The best in virtual travel © Chip and Company

We first experienced the attraction as we normally would (you guessed it, with no waiting), but when it was over, we did not exit (through the gift shop or otherwise); instead, we went behind the screen – Behind. The. Screen. – and experienced the whole thing again. It was amazing, and certainly something neither my son nor I will ever forget. Soarin’ cast members Frankie and Mariah also offered another Fun Fact: If you look really hard, you can spot Captain Jack Sparrow on the beach in Fiji.

The last bit of pixie dust Lori and Christian had in store was a special reserved viewing area for the World of Color in California Adventure. After being closed for refurbishment for over a year, this water, light, and music spectacular looks more spectacular than ever and it was the perfect “kiss goodnight” to end our amazing, magical, and definitely unforgettable Adventures by Disney adventure. 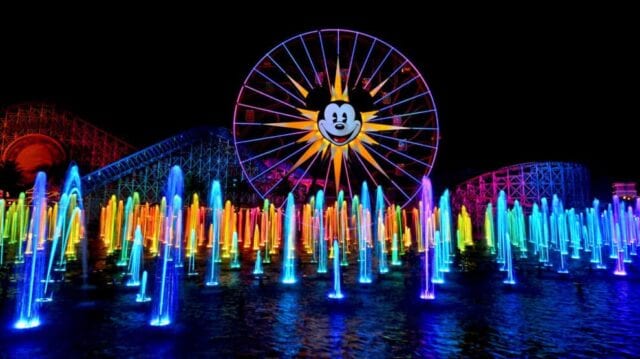 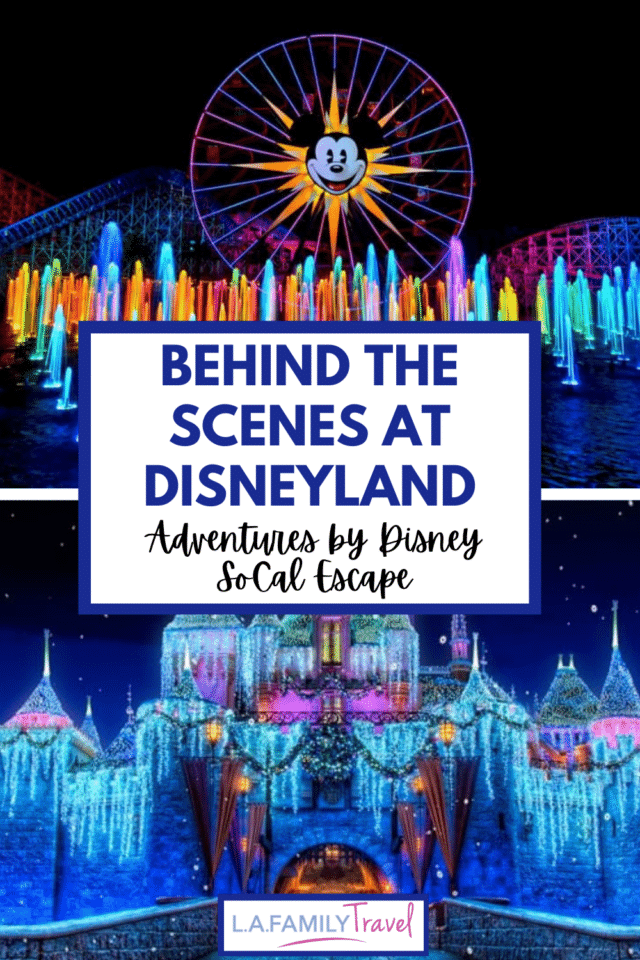