Cutting the Line: A How To Guide For Your Fav Theme Park 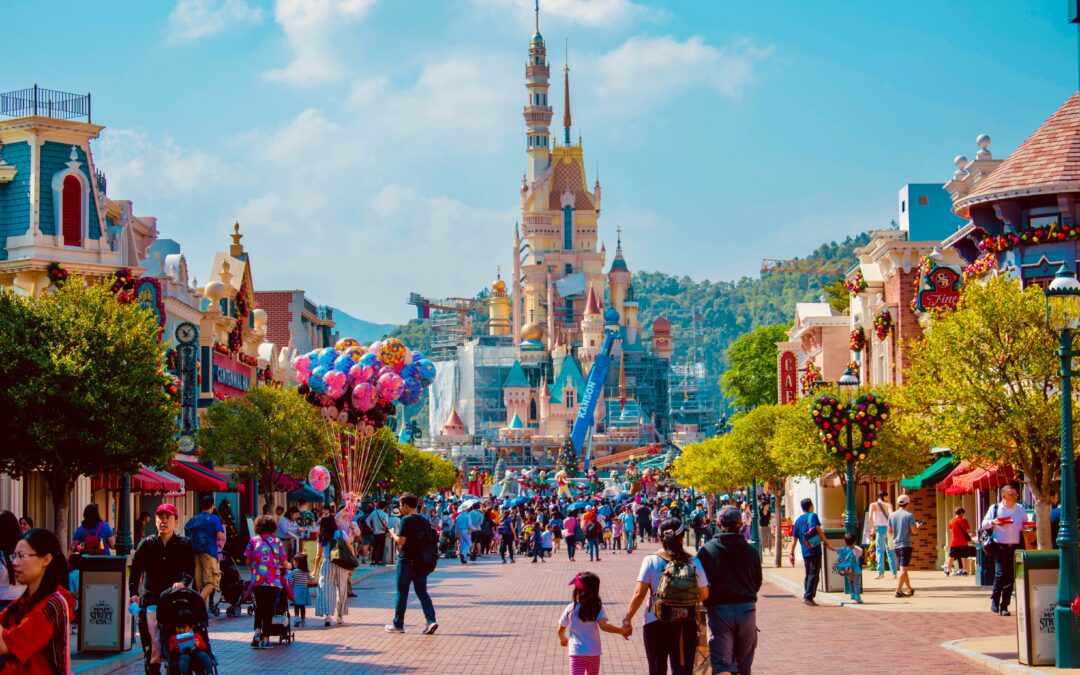 We've all told our kids a thousand times not to cut the line because it's rude and selfish. But what if there was a way to cut a line that was neither rude nor selfish? Intriguing, right?

One of the biggest – and most consistent – complaints from theme park guests is long waiting time in lines, and while the parks obviously try to make queue experiences as entertaining and immersive as possible, there's no way to eliminate them. Or is there? 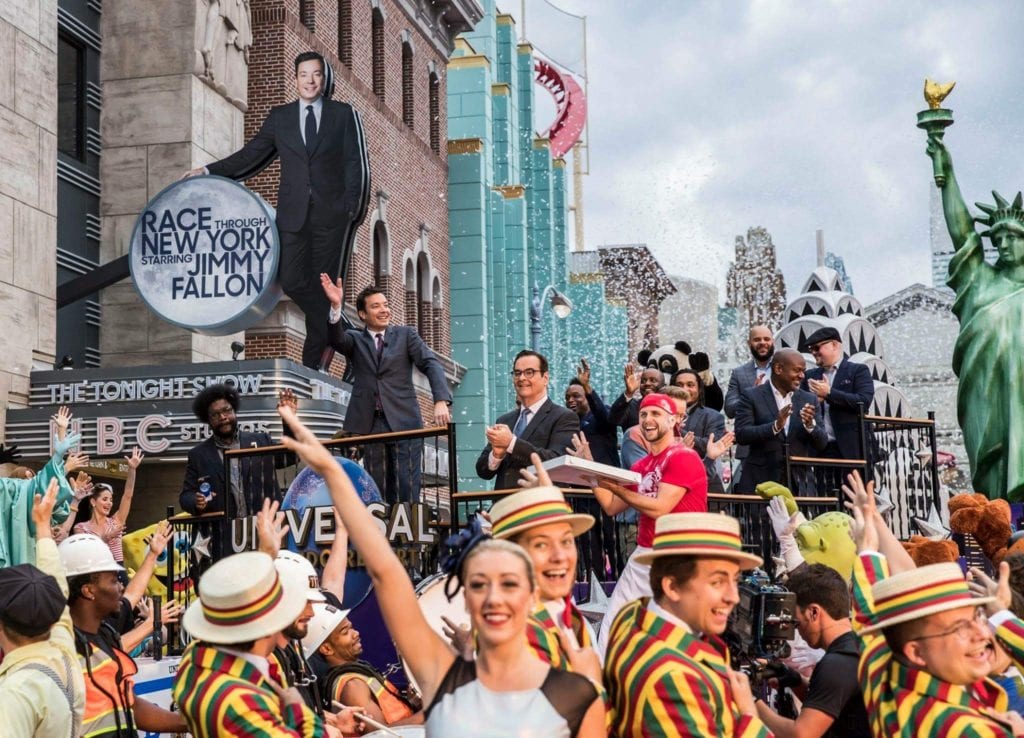 When the Race Through New York Starring Jimmy Fallon attraction opened in 2017, Universal Orlando Resort introduced a revolutionary new idea: a virtual line. With this new system, guests can sign up for spot in the Race Through New York virtual line and eliminate the dreaded "endless switchback" waiting experience. By using the Universal Orlando app from anywhere in the park, you can simply select the time you would like to ride and show up. It's honestly as simple as that. No smartphone? No problem! Kiosks at the attraction work equally well to choose a return time (it just might be a tad less convenient to have to walk over to the ride). 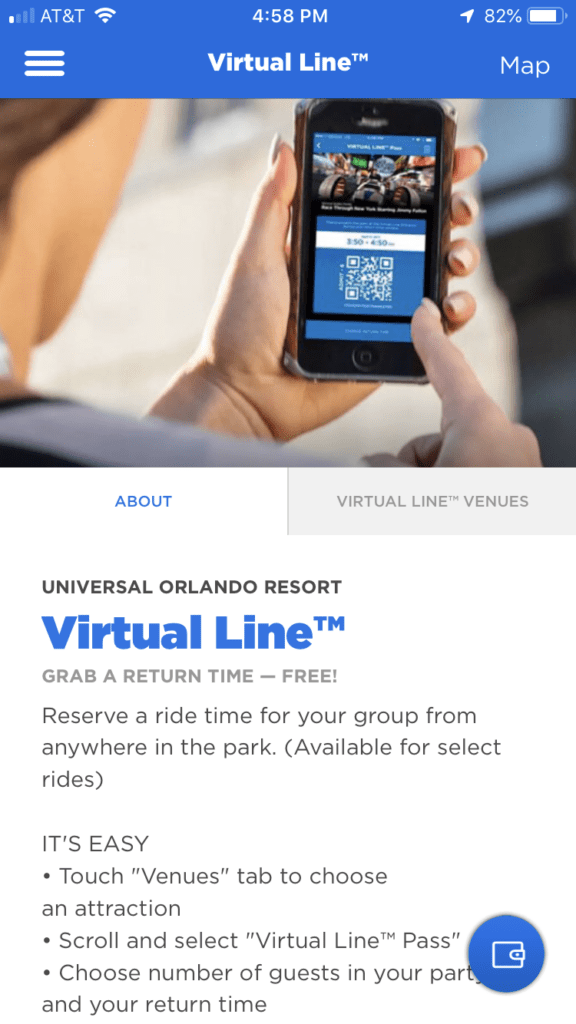 But that's not all! Once guests are inside the attraction, they still don't have to wait on a long line. Instead, they are handed a colored ticket and are then free to explore on their own – and there's a lot of cool Tonight Show memorabilia to see – until the color of the light signals, then it's their turn to move upstairs. Here, there's still no line. Guests can relax in the Tonight Show "Green Room" and even enjoy performances by Tonight Show regulars, the Rag Time Gals and Hashtag the Panda. 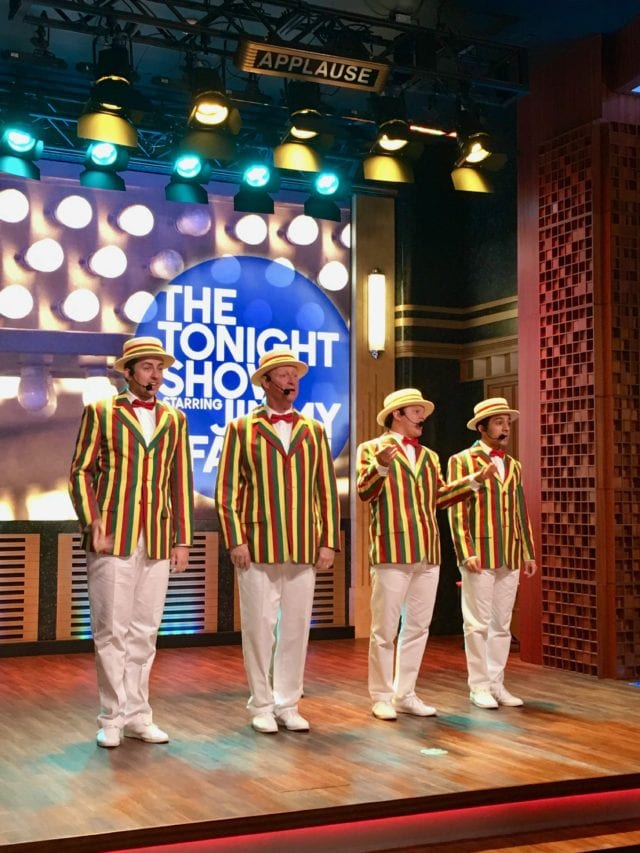 While waiting for their turn to ride Race Through New York Starring Jimmy Fallon, guests are entertained by the Rag Time Gals - Photo Credit Samantha Davis-Friedman

When the lights change color again, it's time to ride – I admit there is a short line this time, but it really is short! 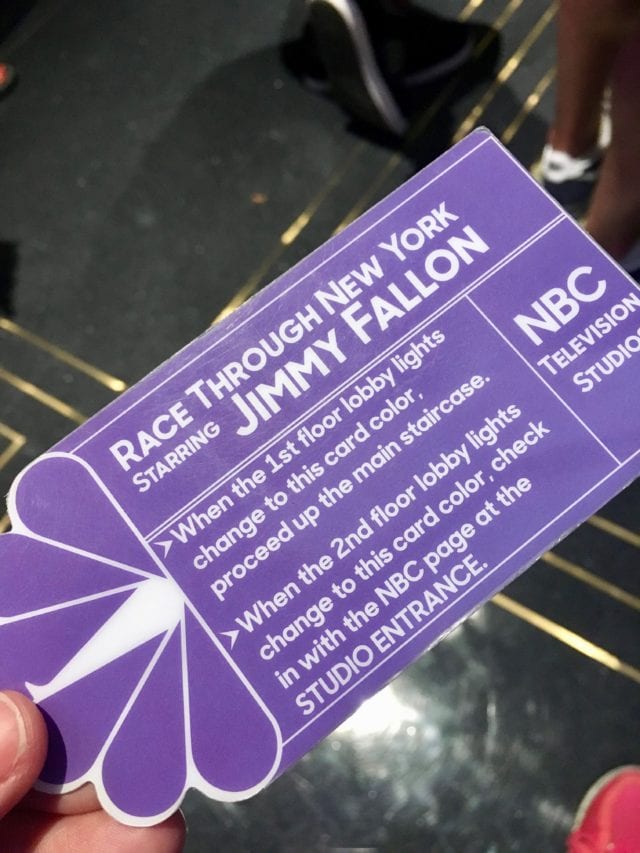 At the entrance to Race Through New York Starring Jimmy Fallon, riders are handed a colored ticket and are then free to explore on their own until it's their turn to ride - Photo Samantha Davis-Friedman

Following the success of the virtual line for Race Through New York with Jimmy Fallon, the Fast & Furious – a supercharged attraction that opened at Universal Studios Florida this year - also offered a virtual line system, but with a slight twist. When it's time to ride, guests get to enter Dom's garage through a separate entrance and not only explore the garage, but also get up close and personal with many of the cool cars from the movie. Again, there is a very short line at the vehicle loading area, but compared to typical wait times for popular attractions, it's barely noticeable. 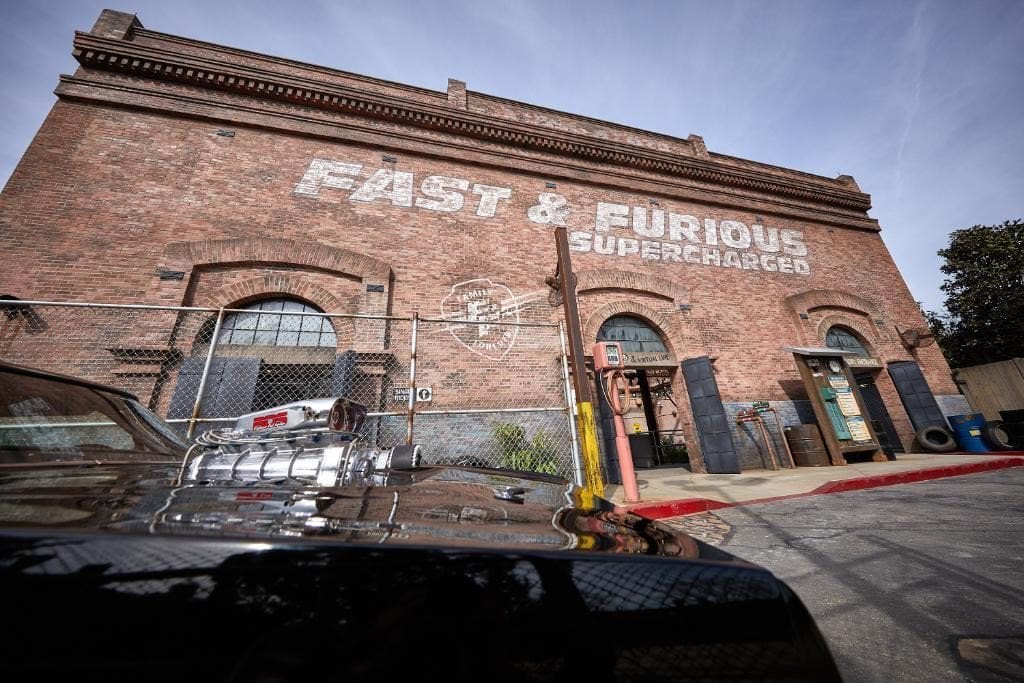 But, you may ask, what about the rest of the attractions at Universal Orlando Resort and Universal Studios Hollywood? For that, I turn your attention to the Universal Express Pass (or as it's called in Hollywood, Universal Express). This separately purchased perk allows guests to enter through expedited lines – so, just to be clear, this is not a "front of the line" pass, but it can cut wait times by about a third.

On busy days (like weekends and holidays), the Express pass does cut down the wait time, but if the park is not excessively busy and wait times are not outrageously long, that's honestly when each family needs to determine if the added expense is worth it for them. If your family includes impatient toddlers (and/or teens) or if you have people in your group who have trouble standing in line for a long time, the Express line could be a real lifesaver. After all, if you're going to invest in taking everyone to a theme park (which we all know is pretty expensive nowadays), you certainly don't want the day ruined by grumpy line waiters. Another thing to consider is whether to choose the standard Express pass, which only allows one use of the Express queue per attraction per day versus Unlimited Express, which lets you use the Express queue as many times as you want. Of course, unlimited access comes at a higher cost.

Pro Tip: At Universal Orlando, several of the resort's on-site hotels offer free Unlimited Express Passes, so if you weren't planning to stay at a Universal hotel for your entire vacation, consider staying at least one night for the Express passes (plus the added perk of early admission into the parks).

"I love that Express Pass is included at the Hard Rock, Portofino, and Royal Pacific," says Meredith Wallace, a Disney travel specialist and mother of three. "The value of staying at one of these resorts really adds so much enjoyment (who likes to wait in line?) that it's absolutely worth the slight increase in price. My family always stays at one of these properties so we can maximize our visit."

FastPass. It's the magic word that anyone who has visited a Disney theme park knows well. At one time, it was the valuable little white tickets that provided access to shorter wait times. And that's still the case, but now instead of little tickets, electronic FastPasses can be accessed through the Disney park apps.

At Disneyland, there are two FastPass options: The traditional Fast Pass where you walk to each attraction, insert your park ticket into a machine, and reserve a time to ride. The little tickets are now merely reminders as the actual FastPass is linked electronically to your park ticket, which you scan when it's time to ride. Pretty fancy, huh? The other option – and the one I recommend – is Disney MaxPass.

Once Disneyland guests purchase Disney MaxPass, they can make FastPass selections for their entire group through the Disneyland app - Photo Samantha Davis-Friedman

"We were always able to navigate Disneyland well with traditional FastPass," says Greg Konkoff, a father of one. "But last summer, we tried MaxPass because we only had one day with some out-of-town guests who had never been to the park before, and we felt like VIPs."

Although the MaxPass system carries an additional $15 fee per person per day, it provides access the FastPass system through the Disneyland app (and one person can make FastPass reservations for their entire group – or "FastPass party" – at once). My favorite part of MaxPass is that once a FastPass is redeemed – like literally the second after you scan at the ride entrance – you can already get a new one. So, for example, instead of scanning a FastPass at it's a Small World, riding the attraction (and singing along, of course), and then walking across the park to Pirates of the Caribbean to get a new FastPass, you can have your Pirates return time before you've even heard the first note of that catchy Small World tune. Plus, once MaxPass is activated upon entering the first park of the day, FastPasses can be reserved through the app for either Disneyland or California Adventure from either park. As an added bonus, MaxPass also gives guests free digital photos from the attractions or taken by Disneyland photographers; without MaxPass, there is a fee to purchase photos.

"I like anything that cuts down the time you have to wait in line," says Abby Smith, a mother of three. "The original FastPass system was great at Disneyland, but MaxPass is a game-changer. I love that I can be waiting in line for one ride and get a fast pass for another ride. Plus, the MaxPass is so reasonably priced, I would not go to the park without using it."

Walt Disney World has a different FastPass system – called FastPass+ – that allows guests to hold up to three FastPasses at once. Once they use all three, they can get one additional FastPass at a time after that. Like Disneyland, Walt Disney World guests can access the FastPass+ system on their smart phones with the My Disney Experience app, though there is no additional charge to use it.

Don't Miss! Adventures by Disney SoCal Escape: How to Get Behind the Scenes 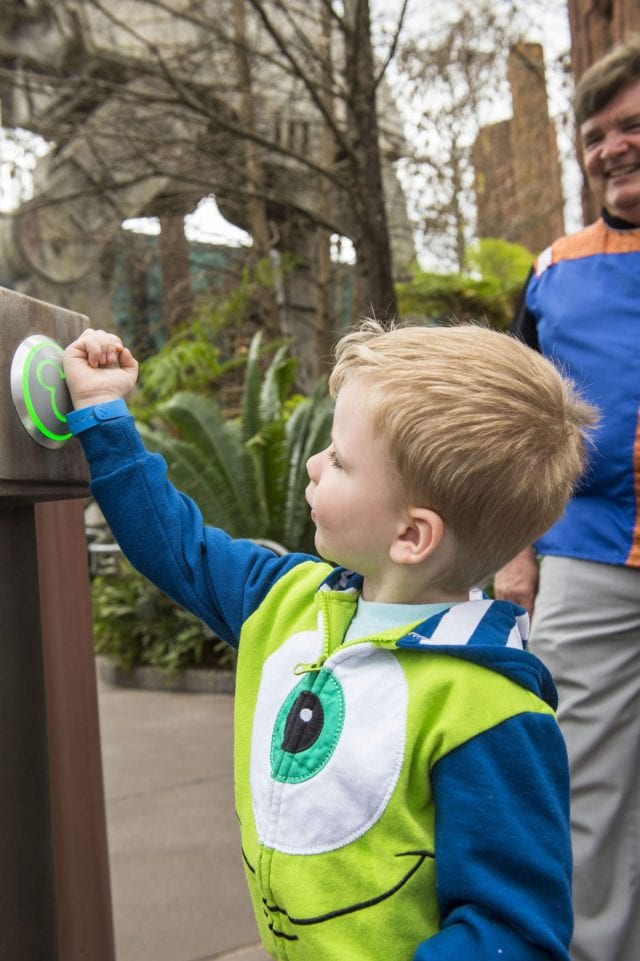 Pro Tip: Unlike Disneyland, where FastPasses can only be reserved after you've entered the park, an important factor to consider at Walt Disney World is that guests who are staying at on-site hotels have the ability to reserve FastPasses weeks ahead of time, so anyone who is only going for the day may – and is likely to – have trouble getting FastPasses for the more popular attractions. Again, like at Universal Orlando, it may be worth staying on-site for at least one night to be able to take advantage of this perk. On-site guests also get magic bands that they can use to scan at attraction entrances (single day guests can purchase bands if they'd like).

Single Rider is a bit of a well-kept theme park secret, and in my opinion, is perhaps the most underutilized way to avoid long theme park lines – especially for families.

Certain attractions offer people riding alone the ability to "fill in" single seats in a ride vehicle. For example, if there is a party of five in a vehicle that seats six, a single rider will fill that extra spot. Every park has different rules, but once kids are old enough and/or tall enough to ride alone – and, of course are willing to – Single Rider lines are a great option because they're frequently much shorter and/or faster than even FastPass or Express lines (though not always). Plus, at Disney parks, there's really no reason to "waste" a FastPass on a ride with a Single Rider line.

There have been plenty of times when my sons and I have waited in Single Rider lines and have still been able to ride together, but you do have to be willing to be separated if you choose to use that line because most of the time, you will be.

One caveat is that, on certain attractions, like Harry Potter and the Escape From Gringotts at Universal Studios Florida, the single rider queue bypasses most of the super cool magical wizardy stuff in the standby and Express lines, so it should definitely not be used the first time you experience the attraction, but for subsequent times, it can be a huge time saver. On other attractions, like Radiator Springs Racers at Disney California Adventure, the single rider queue runs right alongside the standby queue, so you're not missing anything important.

Don't Miss! Why Universal Orlando is Better for Families than Disney World 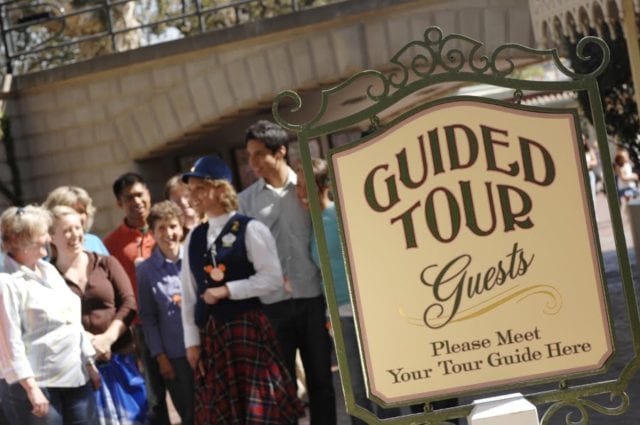 Both Universal and Disney parks offer VIP tours, which provide a personal guide who will act as your "human FastPass" and escort you right to the front of the line. For families who are willing to spend the money, this is a guarantee that you will be able to ride every attraction in the park – even more than once if you want – without waiting.

"If money were no object, I would do a Walt Disney World VIP Tour every visit," Wallace says. "The private tour that is just my family makes it easy to do all the highlights at all four theme parks and still not start at the crack of dawn, it truly is amazing!"

I've been fortunate to have experienced VIP Tours at Disneyland and at Universal Orlando Resort and there's something to be said for sashaying past all the other people in line and right to the front – because, really, who doesn't like to sashay? But, unless it's a super special occasion or this is the one and only time your family will ever be visiting that theme park, it may not be worth the expense. Though the sashaying part is definitely fun, not gonna lie.