No Spoilers! What to Expect from Star Wars: Rise of the Resistance 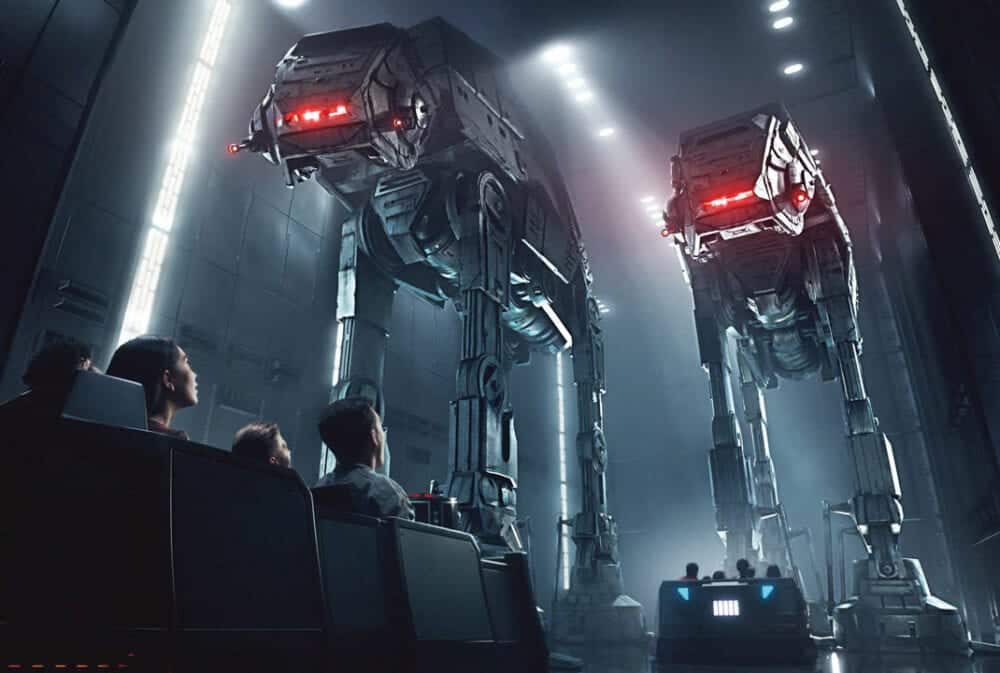 When Disney was preparing to open Star Wars: Galaxy’s Edge at Disneyland and Walt Disney World, there was a lot of discussion among theme park journalists, bloggers, and even park guests that Star Wars: Rise of the Resistance was going to be the biggest, longest, best, most technologically advanced, most epic, most immersive, and basically the most everything you can think of attraction ever. Now, don’t get me wrong, I generally trust Disney when they say new attractions are going to be great, but the best and most of everything in the history of everything? I couldn’t imagine how Disney was going to be able to deliver on a promise that massive. That is – until I rode it.

Since Star Wars: Galaxy’s Edge opened, it has been met with incredible love from guests who not only recognize the epic scale of the land, but every single detail that has gone into bringing Star Wars to life and into giving people the opportunity to become a character in this world by experiencing it as a participant versus a spectator,” says Scott Trowbridge, Walt Disney Imagineering Park Creative Executive for Disneyland and Disney California Adventure. “And we’re going to bring that to life even more with Star Wars: Rise of the Resistance.

I was lucky enough to ride Rise of the Resistance in early December when it opened at Walt Disney World, and I have been thinking about it ever since. It’s not just because the attraction has several “how’d they do that?” moments – though I’m definitely still trying to figure those out – but it’s also because it really is the most everything in the history of everything. On top of that, the attraction’s story is so immersive that I’m still not 100% sure that I wasn’t actually recruited to join the Resistance in their fight against the First Order.

“You are coming in as active characters in this story, as recruits to the Resistance,” says Walt Disney Imagineering Managing Story Editor, Margaret Kerrison (and thankfully, validating my feelings). “We need you to go on a very special mission with some of the characters that you know and love.”

The experience has continued to percolate through my brain for the last month and a half, so I was grateful for the opportunity to ride Star Wars: Rise of the Resistance again when it opened at Disneyland on January 17, 2020. This time, I told myself, I would pay attention to the details. This time, I swore, I wouldn’t let myself be swept away in the epic Star Wars story. I’m a journalist, after all, how difficult could that be? Well, as it turns out, it’s extremely difficult because it’s impossible not to be swept up in the experience. 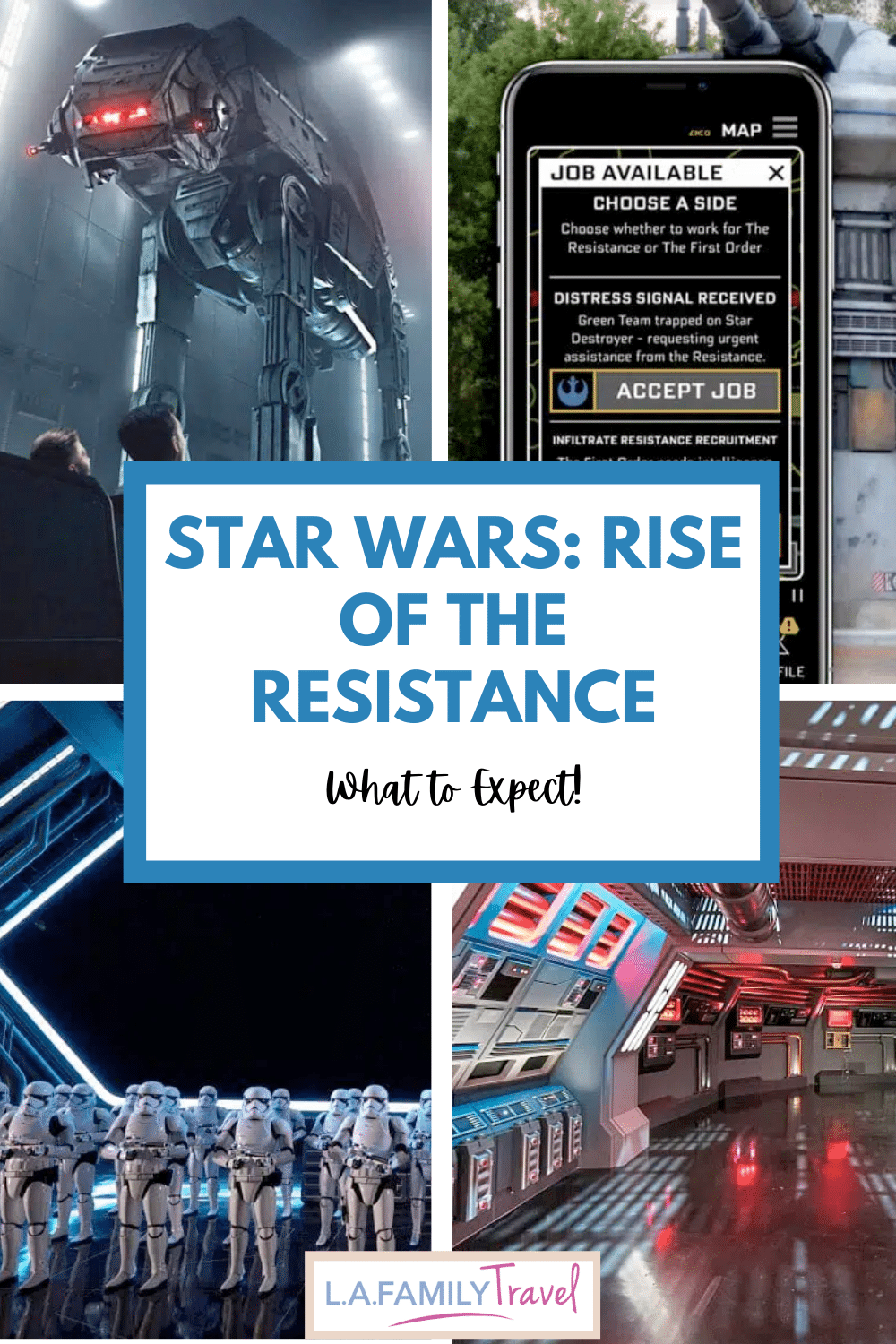 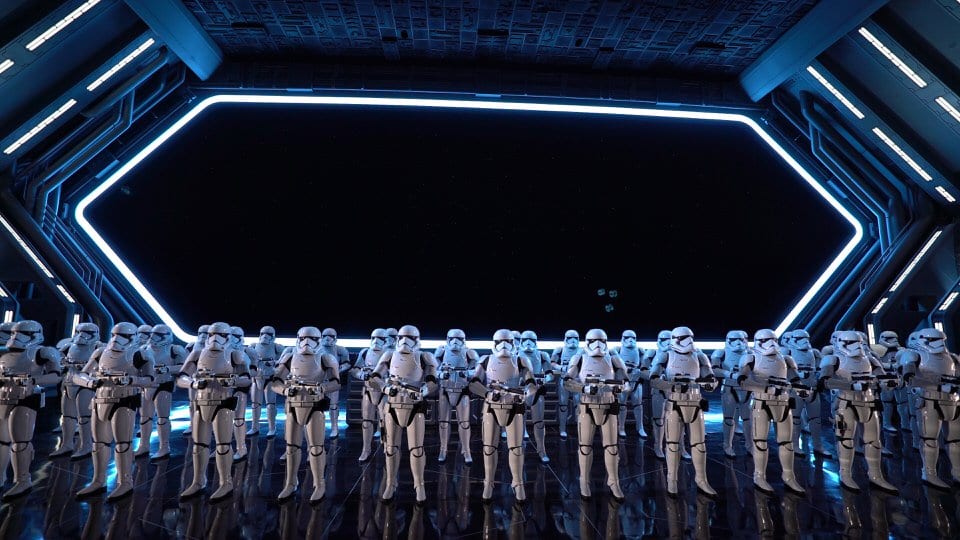 Not even Stormtroopers are excluded from the queue – © Walt Disney World

One important point to note is that the rides at Disneyland and Walt Disney World are the same (so, great news west coast, you’re not missing out on anything). Also, for the foreseeable future, there is no fast pass option available at either park, so everyone “gets” to experience the queue, and while I’m not suggesting that anyone loves waiting in a theme park queue, this one does have a couple of things going for it. First – and essential in sunny Anaheim and Orlando – a lot of the waiting is inside, which parkgoers will especially appreciate during summer months. Second, there is a lot (and I mean A LOT) of serious storytelling going on, which prepares riders for what’s about to happen. 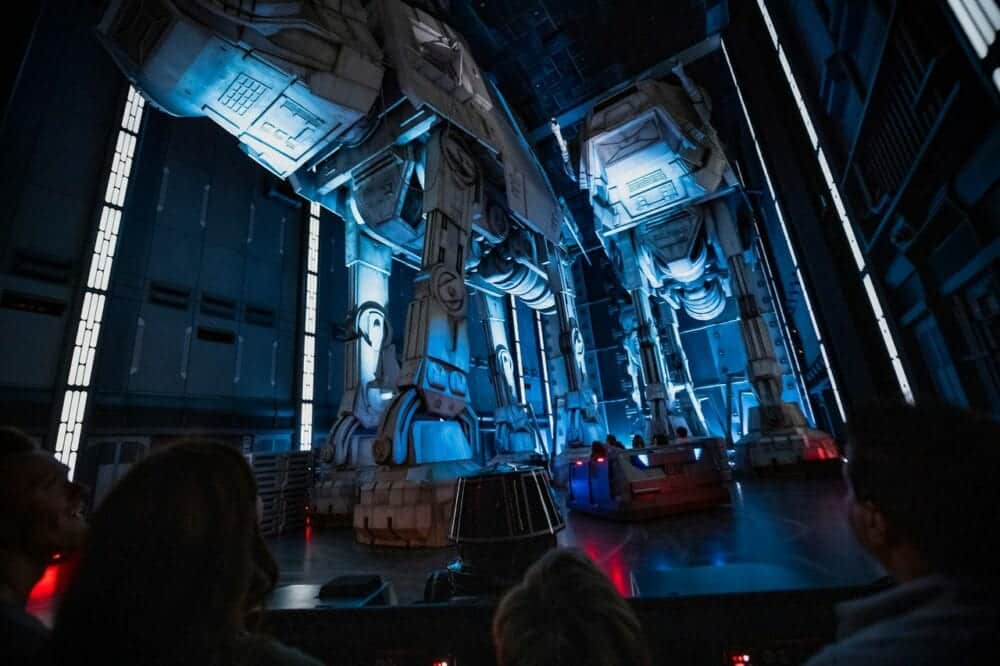 The story begins the moment you step in line – © Matt Stroshane

As soon as you walk underneath the massive gun turrets, the story starts. During the first section of the queue, you are walking through the “Resistance Forest” area of Black Spire Outpost, where the Resistance has set up a secret base to recruit fighters against the First Order. Deep in the forest, recruits reach a maze of caves. There is evidence that these caves, carved by ancient inhabitants of the planet of Batuu (where Black Spire Outpost AKA Galaxy’s Edge is located), have been converted into a makeshift storage facility for weapons, flight gear, and supplies. By the time riders reach the first “show scene,” it’s clear that they’re part of a very secret – and very important – Resistance operation.

“You don’t know what’s going to come next because you are in the moment and of the world.”

“One of the things we really love about these stories is the diversity of the environments in the Star Wars universe,” notes Walt Disney Imagineering Art Director, Kristin Makela. “In Galaxy’s Edge, we have three main stories – the ancient civilization of Batuu and Black Spire Outpost, the scrappy ‘flying by the seat of their pants’ Resistance, and the all-powerful ominous First Order. Rise of the Resistance is where all three of these story threads come together.” 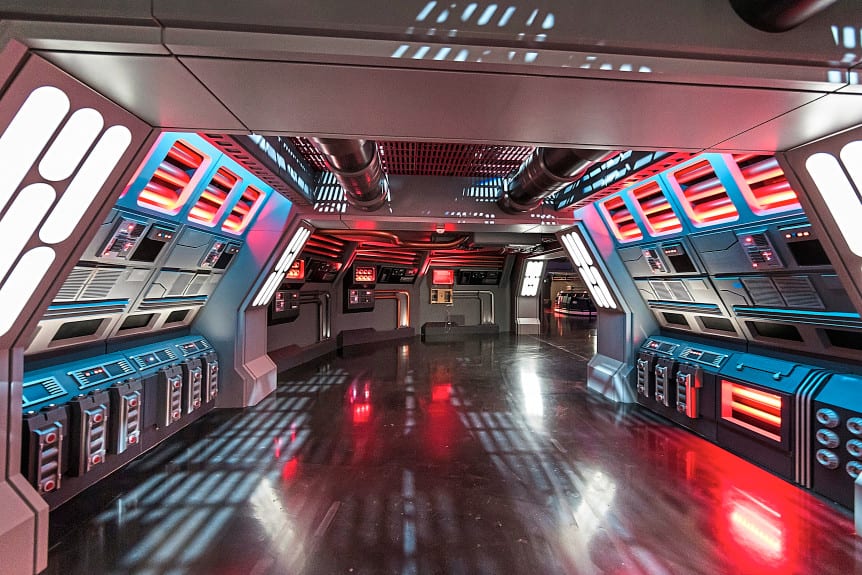 To avoid spoilers, I will resist the urge to reveal too many details about what happens during the ride, but basically, Resistance recruits are instructed to board a transport ship to take them on their mission and, in true Star Wars form, things don’t go exactly as planned. The transport ship is captured by a First Order star destroyer where the crew does not take kindly to “Resistance Sympathizers.” Even after several encounters with First Order guards, I have yet to find one who doesn’t take his or her job extremely seriously, so it’s best to follow directions, avoid eye contact, and whatever you do, don’t ask any questions.

As with the land’s other attraction, Millennium Falcon: Smuggler’s Run, the Disney Imagineers have done a remarkable job of recreating an iconic Star Wars environment, and it really feels like you’ve walked right into a scene from a Star Wars movie. Plus, the contrast from the rustic caves used by the Resistance is jarring. Instead of the hand-carved stone with jerry-rigged wires hastily strung from the walls and ceiling, the Star Destroyer’s black floors are sleek and shiny, and the metallic walls are covered with high-tech computer consoles and flashing red warning lights, not to mention the very prominent presence of menacing Storm Troopers.

If things not going as planned is one of the essential hallmarks of a Star Wars adventure, a daring rescue, and subsequent escape, is certainly another. Again, to avoid spoilers, I won’t disclose how we escape the clutches of the First Order – and villain Kylo Ren in particular – but I will say that the attraction not only checks all the boxes for Star Wars fans but will also thrill riders who have never seen a Star Wars movie and turn them into fans, just as Kerrison promised.

DON’T MISS! Adventures By Disney: A Behind The Scenes Disneyland Tour 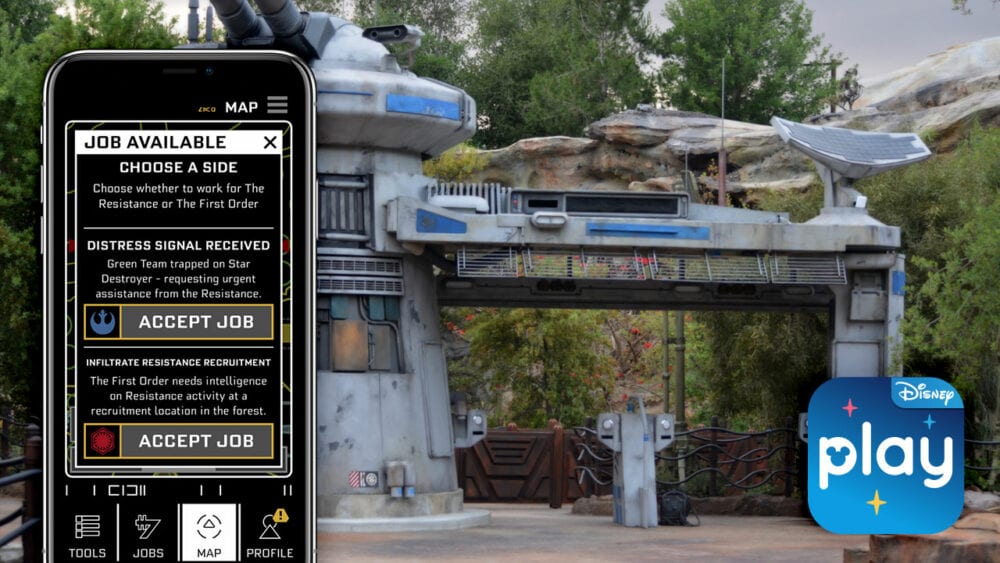 There are a lot of special tasks and secrets throughout Galaxy’s Edge that can be accessed and uncovered through the Play Disney Parks app, which turns any ordinary smartphone into a Star Wars datapad. With the opening of Rise of the Resistance, several extremely cool new features have been added to the app, making the experience even more immersive while simultaneously giving impatient kids something to do while they’re waiting to ride.

“When you download the Play Disney Parks app, you have a datapad ready to go in your pocket,” says Anisha Deshmane, Walt Disney Imagineering Assistant Producer. “And now that the Resistance is recruiting in the forest, we want to give guests a piece of that action…through two new jobs that hook into the story of the attraction really nicely.”

“You’re going to have a map of the destroyer and help Finn choose which rooms to go into,” Deshmane says. “Depending on which path you choose, you might be helping Finn in a different way than someone else. It’s worth seeing if there’s a more strategic approach because there’s definitely some danger, and you can get Finn in some real trouble.”

“It’s really exciting to not only launch the next chapter of storytelling with Rise of the Resistance, but also bring this additional layer of personal engagement,” Trowbridge says. “Whether you choose to help the First Order or the Resistance – and playing both sides is really fun – we’re really excited about continuing to add to the storytelling we’re doing in Galaxy’s Edge.”

Know Before You Go 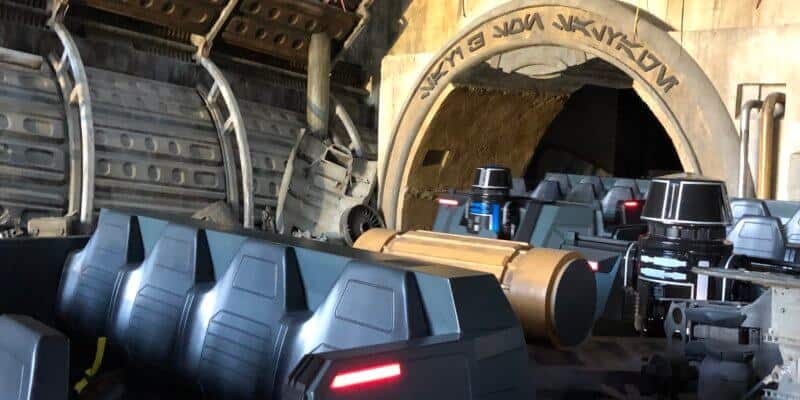 Buckle up for this one-of-a-kind galactic adventure! – © Emille ITM Reporter

The ride incorporates four ride systems, which includes two short motion-simulator sections similar to Star Tours or Millennium Falcon: Smuggler’s Run. There is also a section onboard a trackless ride vehicle and one very small vertical drop tower (imagine a baby Guardians of the Galaxy – Mission Breakout!/Tower of Terror drop), but there are no rollercoaster-like drops, curves, loops, or launches.

Both parks are using a virtual queueing system to assign “boarding groups” for ride times. The best way to access this system is through the official park apps. One thing to be aware of is that guests can only get a boarding group once their admission ticket has been scanned into Disneyland or Hollywood Studios. This system is different than Walt Disney World’s FastPass+ system, which can be accessed in advance and/or from outside the park gates. Also, every member of the party must be inside the park to ride, meaning that one person can’t go in and get a boarding group for everyone in their group/family.

There have been a lot of posts on social media about people lining up in the middle of the night to get into the parks as early as possible, but since this system is not first come-first served, there’s no benefit to doing that. Boarding groups open when the park opens, and at that point, every person inside the park has the same chance. Also, it’s important to note that there are only a limited number of boarding groups available per day, so there’s no guarantee of riding regardless of what time you get there. I’ve seen just as many posts from people who got to the park at 3 am and didn’t get a boarding group as I have from people who got there 5 minutes before the park opened and did, so it’s really just a matter of luck.

Last, but certainly not least, the ride is between 15 and 20 minutes long (not counting time in the queue), so parents, I suggest making a bathroom stop and/or feeding hungry kids before getting in line. Everyone will be happier and enjoy the experience more – especially you! 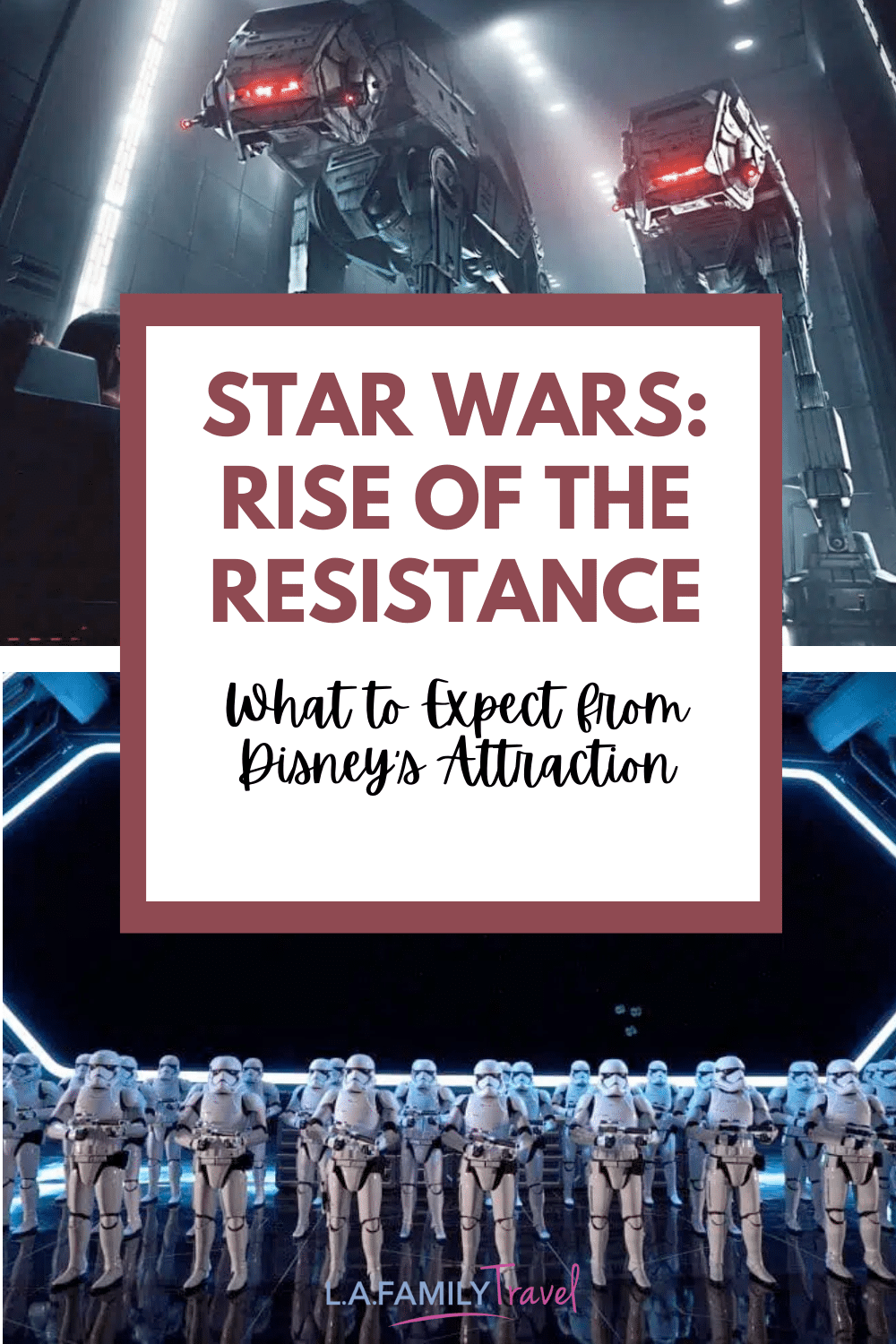