Can’t Miss Things to Do in Atlanta With Kids

Historic, bustling, full of life, the city of Atlanta has a flavor all its own. Known to adults for its hip music scene and powerhouse film industry, there are also pint-sized versions of both plus plenty of things to do in Atlanta with kids. Try these kid-friendly attractions and activities the next time you plan a visit to Atlanta, Georgia.

Contents hide
1 Georgia Aquarium
2 World of Coca-Cola
3 Movies & Music
4 Zoo Atlanta
5 Catch a Game
6 Martin Luther King, Jr. Birthplace
7 When You Go
7.1 Getting There
8 Where to Stay
8.1 Where to Eat

NO TIME TO READ NOW? PIN OR BOOKMARK FOR LATER! 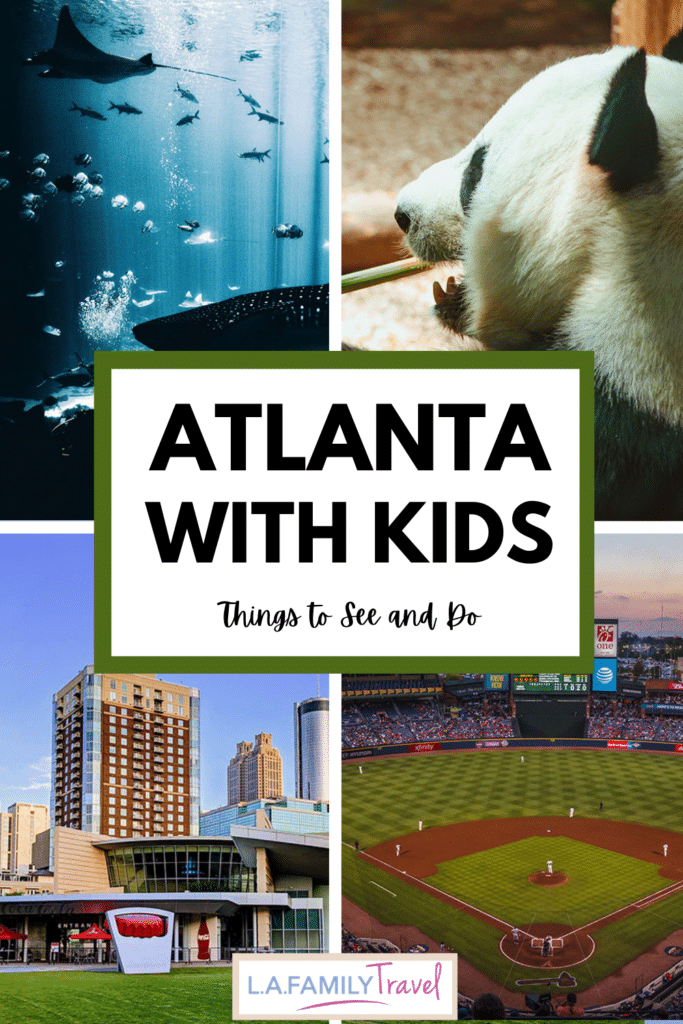 The impressive Georgia Aquarium is home to ocean giants such as whale sharks, manta rays, and beluga whales. While admission is pricey at $36 per person, we found it worth the experience. With sea lions, penguins, hammerhead sharks, and countless other species, the exhibits are fascinating for adults as well as kids. The dolphin show was a highlight for our family; we were awed by the animals’ amazing athletic abilities. However, the Georgia Aquarium isn’t just about the glitz of animal exhibits and shows; as members of the American Association of Zoos and Aquariums, they focus on conservation and the well-being of their animals. If your family wants an extra-special experience, try a behind-the-scenes tour or even a shark cage dive! 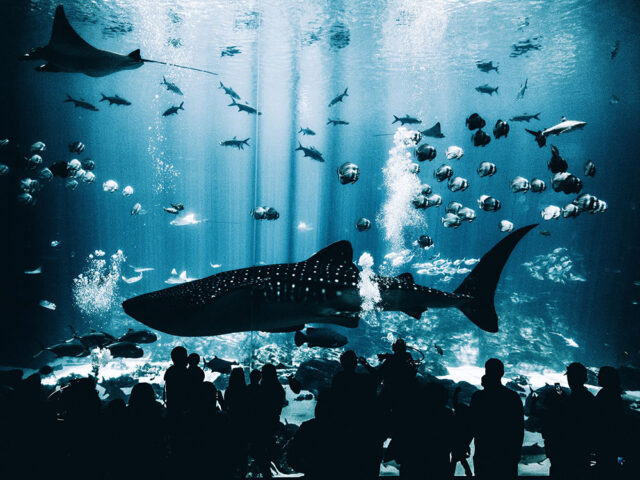 Giant whale sharks are among the many dazzling animals at the Georgia Aquarium. Photo by Matt Helbig on Unsplash.

While you’re at the aquarium, you’ll notice people streaming into another building nearby — The World of Coca-Cola. It’s hard to explain why so many people love visiting a museum about a soft drink, but it’s a popular part of the Atlanta experience. You can see antique Coca-Cola artifacts including a delivery truck so big that the building was built around it. You’ll learn about Coca-Cola’s secret recipe and see if you can keep it safe during an interactive game. But the highlight of the museum is the room where guests can taste Coca-Cola products from around the world.

Pro-Tip: Be sure to try the drink called Beverly — you can thank me later. 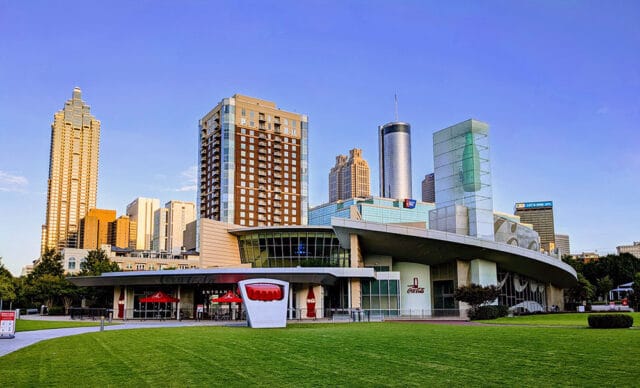 The World of Coca-Cola gives visitors a peek at the secrets of Georgia’s homegrown soft drink. Photo by Akhil Yerabati on Unsplash.

Atlanta has become one of the most popular locations for movie and TV filming in recent years, with franchises like Marvel, The Hunger Games, Stranger Things, and The Walking Dead calling the area home. If you have older kids or teens, be sure to book a movie location tour or research places to visit on your own. Trilith Studios, formerly Pinewood Atlanta, is not open for tours, but you can stop in for lunch at the on-site Studio Cafe. Young music fans will want to head to the Children’s Museum of Atlanta for daily songs and dances at CMA On-Stage (but save T.I.’s Trap Music Museum for older teens).

Historic, bustling, full of life, the city of Atlanta has a flavor all its own. Try these kid-friendly attractions and activities the next time you plan a visit.

Zoo Atlanta is one of the few remaining zoos in the country to host giant pandas. Set in the lush greenery of Grant Park, the zoo has morphed from a Victorian traveling show in the 1880s to an AZA-accredited organization with over 1,000 animals. I definitely recommend visiting the Western Lowland Gorillas; the zoo has one of the largest populations of gorillas in the U.S., and you might catch a glimpse of an adorable gorilla baby snuggling with its mom. 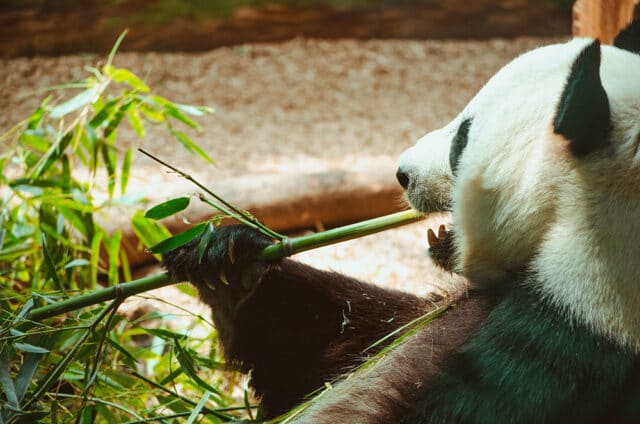 Zoo Atlanta delights visitors with pandas, gorillas, elephants, and more. (Side note: the panda cam on their website is great, too.) Photo by Johnathan Meyer on Unsplash.

I spent so much of my childhood going to Braves baseball games in Atlanta that I was sure that’s what the national anthem meant (“and the home of the … Braves?”). With Braves tickets available for under $20 and the ability to bring in outside food, your family can catch a Major League Baseball game without breaking the bank. Baseball not your style? Try an Atlanta United FC soccer game or an Atlanta Falcons NFL game.

[su_quotes]Pro-Tip: Every Sunday, the zipline, rock climbing wall, and games in the children’s area of the Braves’ stadium are free. [/su_quotes] 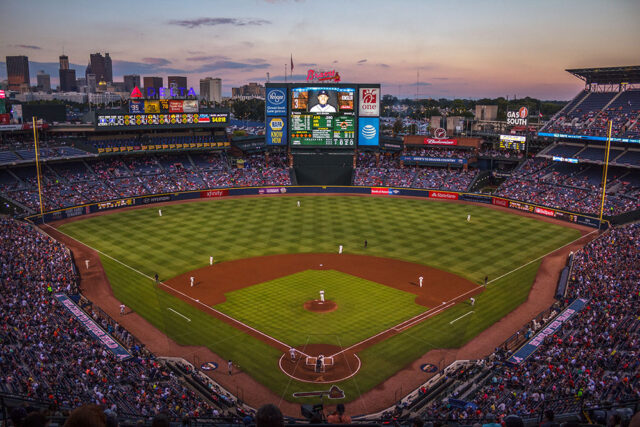 Attending Braves games has been an Atlanta tradition since the 1960s. Before you buy tickets, check their promotional schedule to find out about giveaways and fireworks nights. Photo by Joshua Peacock on Unsplash.

Don’t Miss! Our 9 Favorite Family Friendly Things to Do In Charleston

Take some time to learn about important elements of U.S. history by visiting the Martin Luther King, Jr. National Historical Park. The park includes a ranger-led tour of the 1895 house in which King was born and spent his early childhood. Families also can tour Historic Ebenezer Baptist Church where King was co-pastor, an antique fire station that once served the area, and the visitors center that features an exhibit especially for children. To learn even more, stop by The King Center for displays about Dr. Martin Luther King, Jr., Rosa Parks, and Mahatma Gandhi. The King Center also serves as the final resting place for Dr. King. 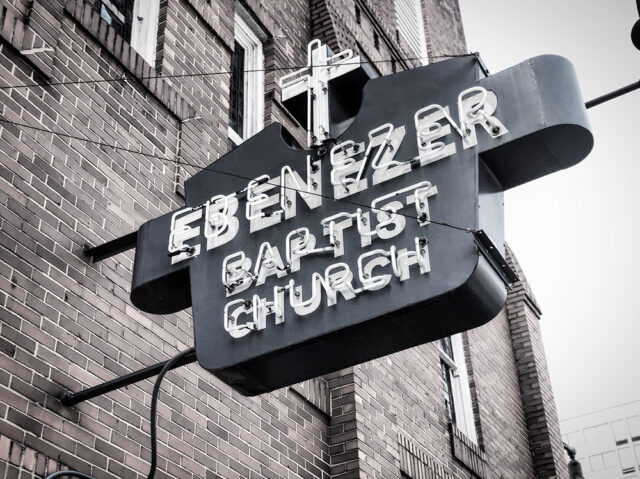 You can save money by getting the GoCityCard and get discounts on many family-friendly activities.

Viator also sells tickets to many attractions so you can make sure to get your tickets before they sell out!

Atlanta’s primary airport is Hartsfield-Jackson Atlanta International Airport (ATL). The airport is known as the major hub for Delta Airlines, but it offers air service by multiple domestic and international companies. Nonstop flights from Los Angeles to Atlanta take four or five hours and are available with Delta, American, and Spirit Airlines.

We’ve found great flight deals with CheapOAir. Use the fields below to compare flights during the time you’d like to visit. 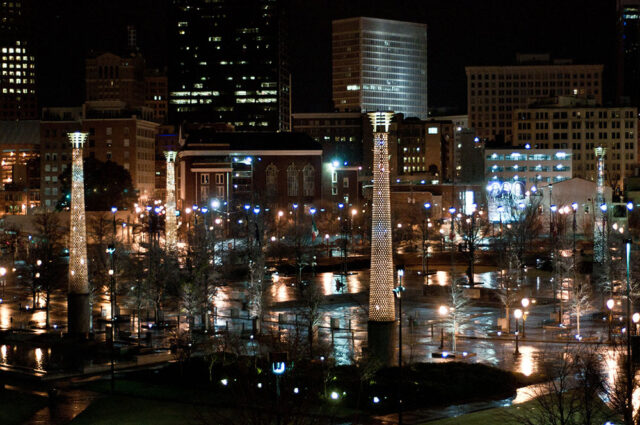 Hotels near Centennial Olympic Park, like Hyatt Place or Embassy Suites, are close to the Georgia Aquarium and the World of Coca-Cola (plus, the park has a great playground for kids).  Stay in Atlantic Station if you want a theater, a bowling alley, and plenty of shopping and dining nearby (bonus: date night at IKEA while the kids play in Småland!). If you prefer to stay outside of the city center, find a hotel or vacation rental in the Buckhead area.

Use this map to find the area where you’d like to stay. There are hotel and private home options.

Families looking for kid-friendly Atlanta restaurants give rave reviews to R. Thomas Deluxe Grill. R. Thomas’s gourmet dishes are vegetarian-friendly, and their kids’ menu is popular for offering childhood staples like peanut butter sandwiches and plain pasta. Highland Bakery is a well-known Atlanta chain that offers scrumptious muffins, croissants, and deli sandwiches. Flip Burger Boutique is known for gourmet burgers, but don’t skip their selection of milkshakes with flavors including Nutella and Krispy Kreme. The Varsity is a classic spot for chili dogs, onion rings, and fries (also: Fried. Peach. Pie.). And I have to put in a good word for Nashvillian-owned Slim & Husky’s, with their artisan pizzas and killer cinnamon rolls. 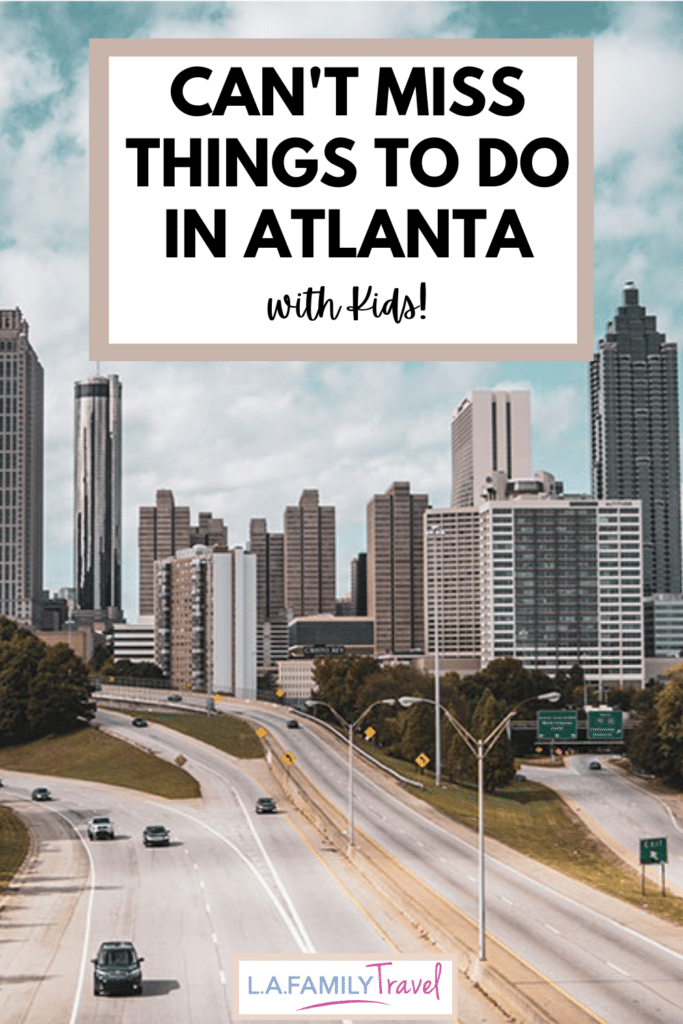