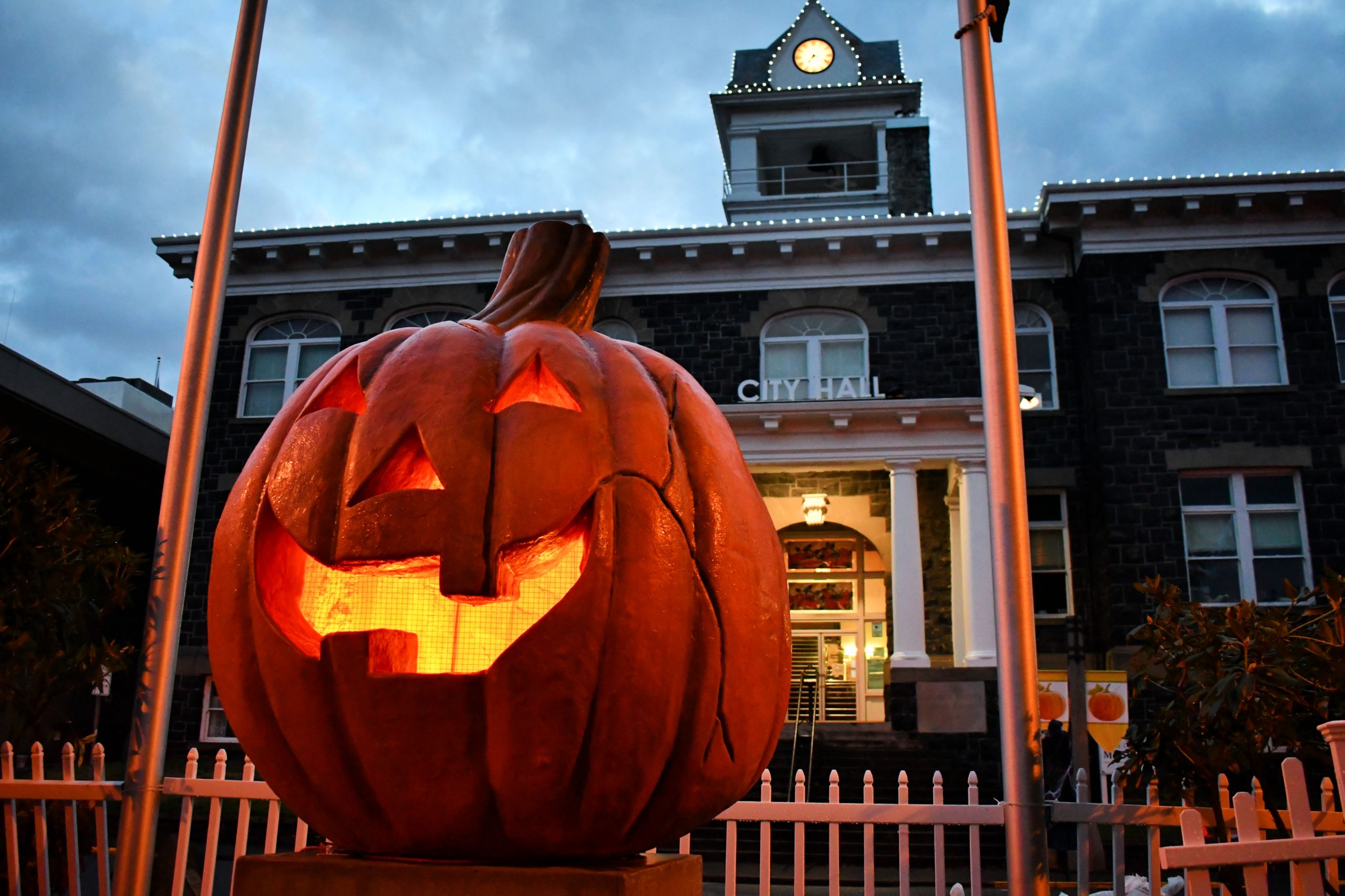 “Halloweentown” isn’t just a story on the silver screen. It’s a real place you can visit with your family anytime!

From November to August, Halloweentown goes by the less spooky name of St. Helens Oregon. But when the leaves begin to fall and the smell of pumpkin fills the air, the small town rises from the grave to become a Halloween heaven on earth.

In the spirit of the spooky season, the townspeople of St. Helens put on a month-long event spreading Halloween cheer. And if your family loves Halloween as much as ours, you’ll want to learn more!

Keep reading, and I’ll share with you the must-know things about how to have a terrifyingly fun time at Halloweentown, USA!

Contents hide
1 The Origins Of Halloweentown
2 When Is Halloweentown In St. Helens, OR?
3 Do You Need Tickets To Halloweentown?
3.1 Where To Buy Tickets
3.2 Will There Be Parking?
4 6 Spooky Things To Do At Halloweentown Oregon
4.1 Watch The Lighting Of The Giant Pumpkins
4.2 Take Photos In The Main Plaza
4.3 Visit The Vendor Village
4.4 Participate In Costume Contests
4.5 Get OutRRRageous With Pirates!
4.6 Brave The Haunted House
5 When You Go
5.1 How to Get to Halloweentown from Los Angeles
5.2 Where to Stay in St Helen’s to Enjoy Halloweentown

NO TIME TO ENJOY THIS ARTICLE NOW? PIN IT! OR BOOKMARK IT FOR LATER! 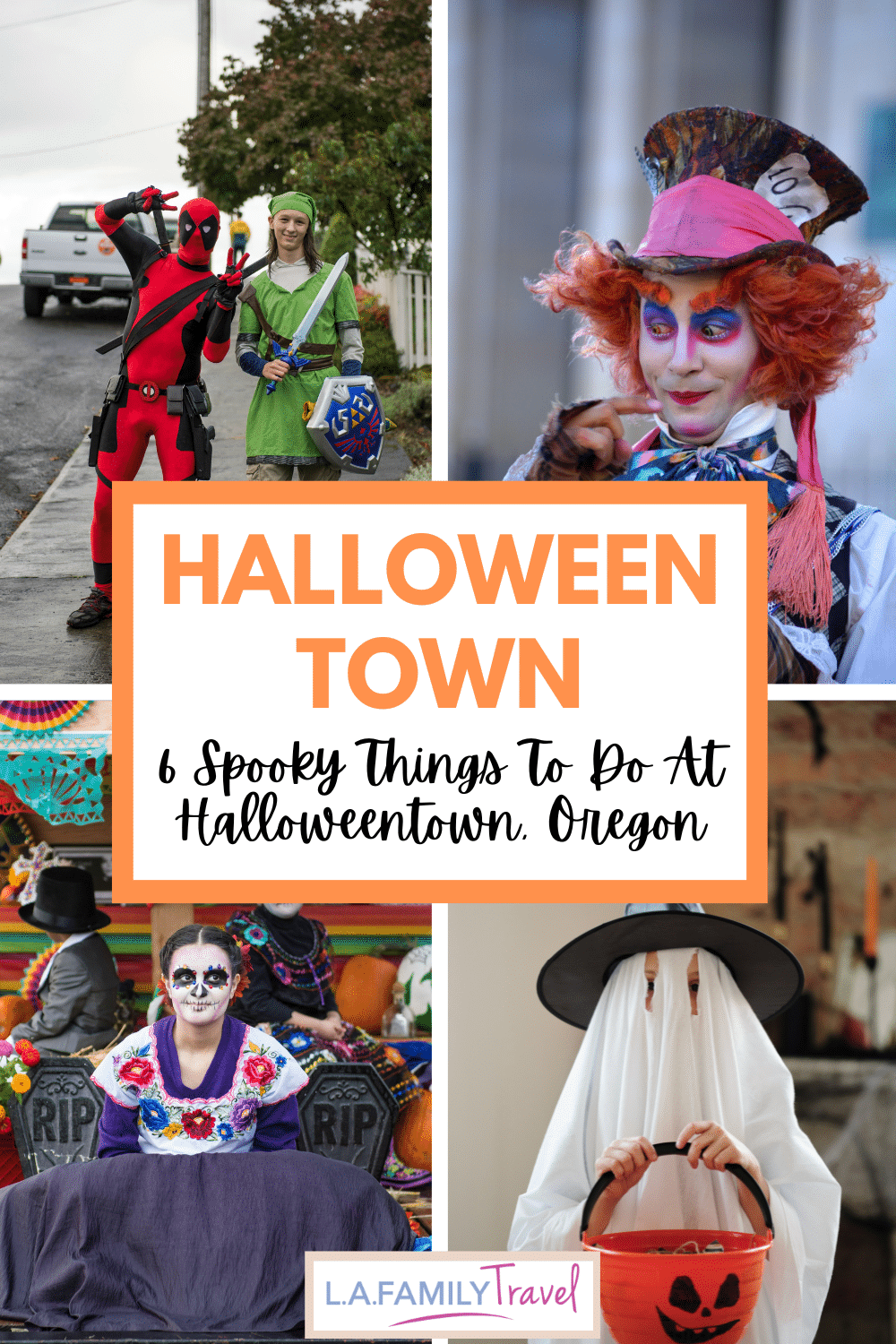 The Origins Of Halloweentown

St. Helens, OR wasn’t always this spooky. So what happened? The answer lies in a certain classic Disney Channel Halloween special called “Halloweentown.”

As you may have guessed, St. Helens was the filming location for this family-friendly Halloween flick. Word got round after the movie became a cult classic. Soon the city of St Helens became associated with real haunted places.

A few years later, “Twilight” was filmed in various locations around Oregon and Washington. One of those filming locations was St. Helens, OR!

With a double helping of haunted like that, St. Helens solidified its claim as the best Halloween town in the world. Throughout the entire month of October, thousands flock to enjoy the town’s parades, jack-o’-lanterns, pirates, costume contests, and so much more! 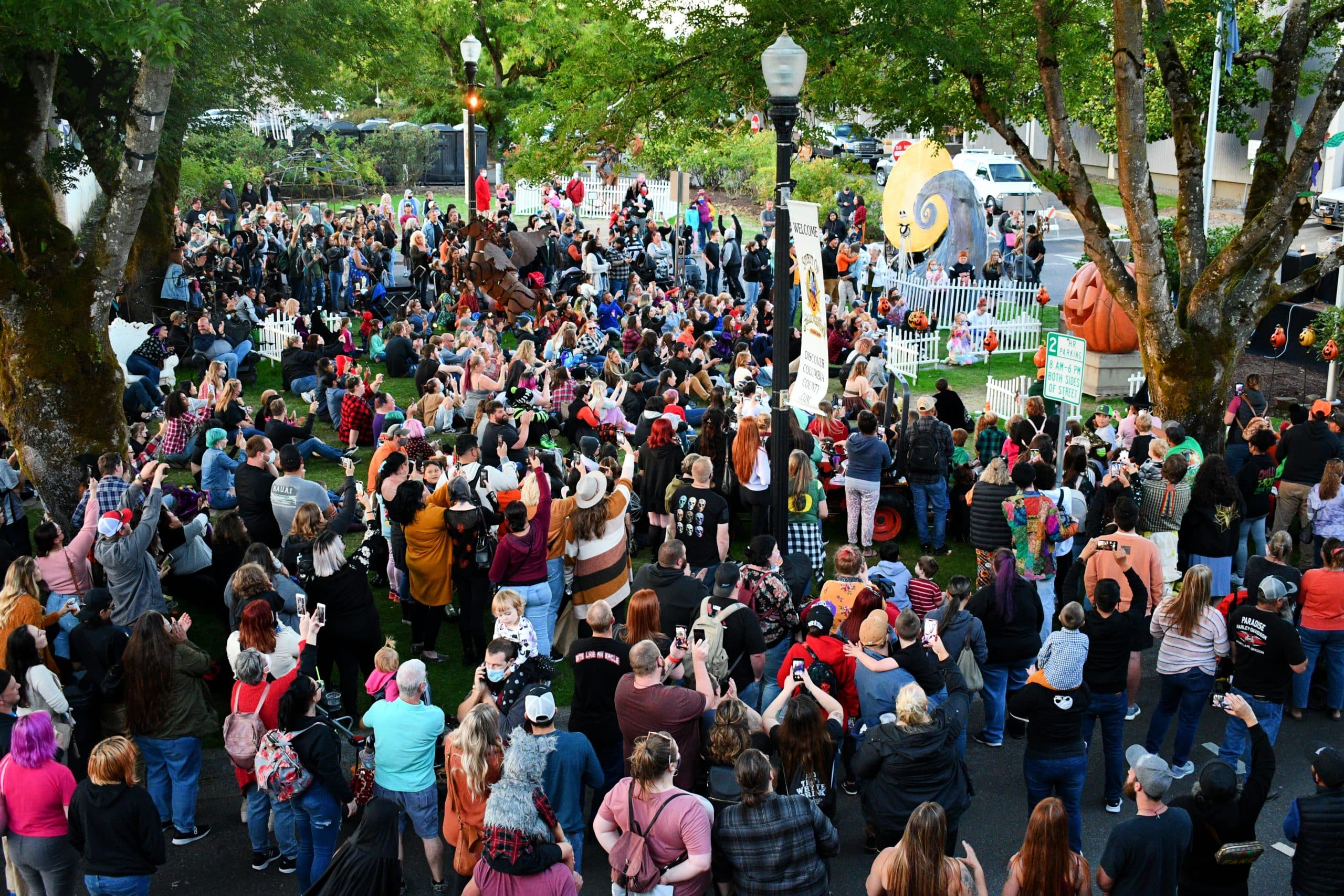 When Is Halloweentown In St. Helens, OR?

The Spirit of Halloweentown is from September 17th to October 31st. It’s open 24/7 — but the main events happen on the weekends.

Turn your trip into a long weekend of spooktacular fun and stay at one of the nearby hotels in Portland, OR. You can find a list of the best hotels below.

Do You Need Tickets To Halloweentown?

You only need tickets to Halloweentown if you want to take part in any of the special events. However, it’s free — and even encouraged! — to walk around the courthouse plaza. There’s a giant pumpkin (from the “Halloweentown” film), a Vendor Village, and lots of photo ops.

Even if you don’t plan on buying tickets, there are still a ton of fun things to do and see at Halloweentown.

Learn more about the free events at Halloweentown here.

Where To Buy Tickets

Tickets to Halloweentown can be purchased on the annual event’s website here. General admission tickets get you access to 3 main attractions you can enjoy on the weekends (in addition to all the regular spooky stuff you can enjoy for free!) These include the new Spirit of Halloween Train, the Haunted House, and the Pumpkin Puzzle Plaza. We got the general admission tickets and felt like we saw everything we wanted to see.

Tickets for individual attractions (like a scavenger hunt on Sand Island) are sold separately. You can learn more about ticket prices for separate attractions at Halloweentown this year here.

Will There Be Parking?

Parking tickets purchased ahead of time are $15. I recommend going with that as on-site parking is $20! 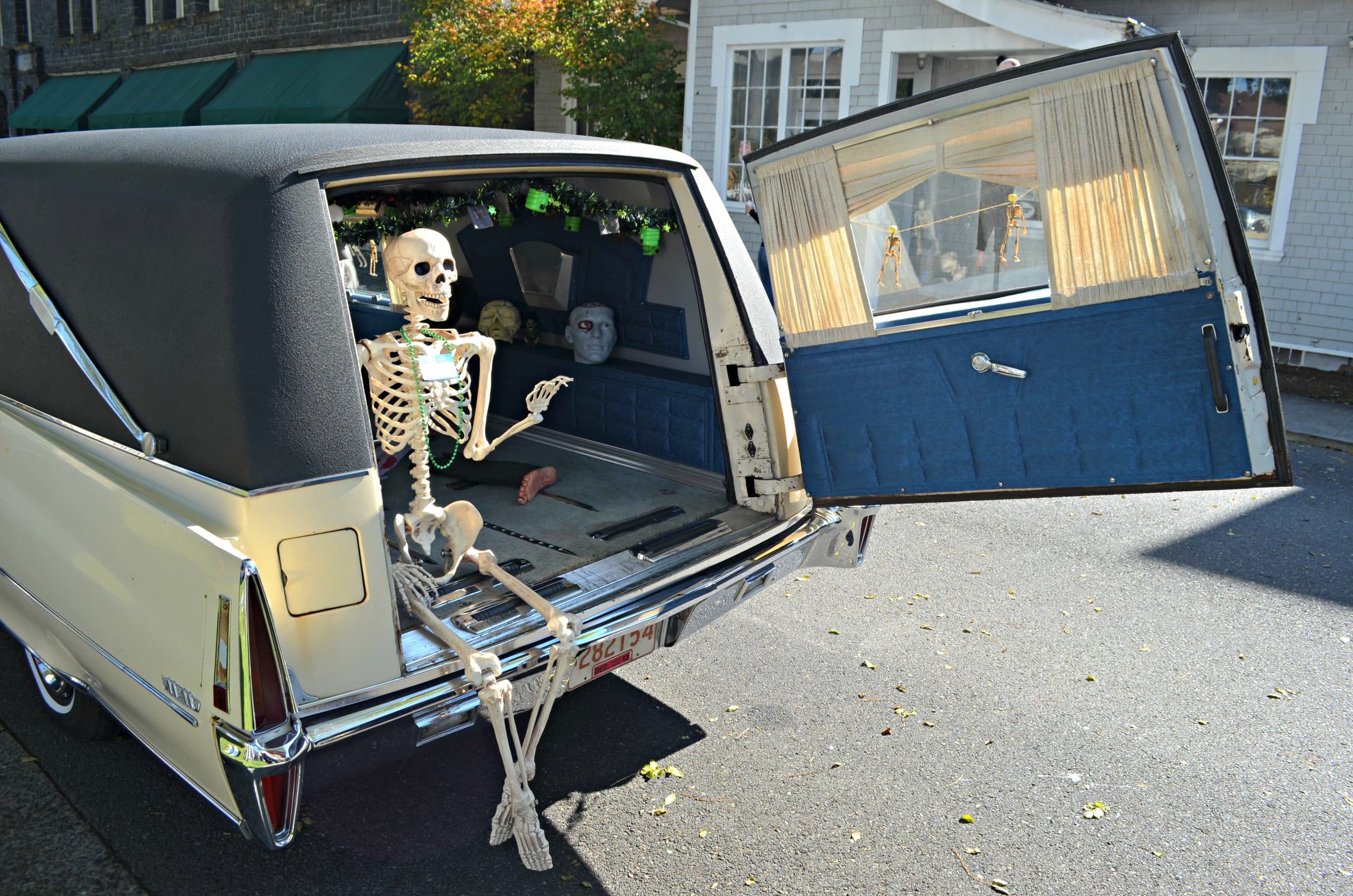 6 Spooky Things To Do At Halloweentown Oregon

Great! But what exactly do you do at Halloweentown? I’m glad you asked! In addition to enjoying the town of St. Helens’ general spookiness, there are a number of Halloween-related events that’ll be going on throughout the autumn season.

Watch The Lighting Of The Giant Pumpkins

Although the Spirit of Halloweentown celebration technically starts in September, it’s the massive parade on October 1st that officially transforms the town of St. Helens into Halloweentown.

The parade is at 6:00pm and lasts until the sun goes down. With costumed performers, giant scarecrows, dancers, and pirates, it’s like watching the Halloween parade at the start of “A Nightmare Before Christmas.”

After the parade, there’s the lighting of the giant pumpkins in the town square. This officially opens Halloweentown for all us ghouls and goblins who look forward to the spooky season all year round. After watching the townspeople light the pumpkins, it’s fun to walk around and take photos of all the jack-o’-lanterns and decorations. 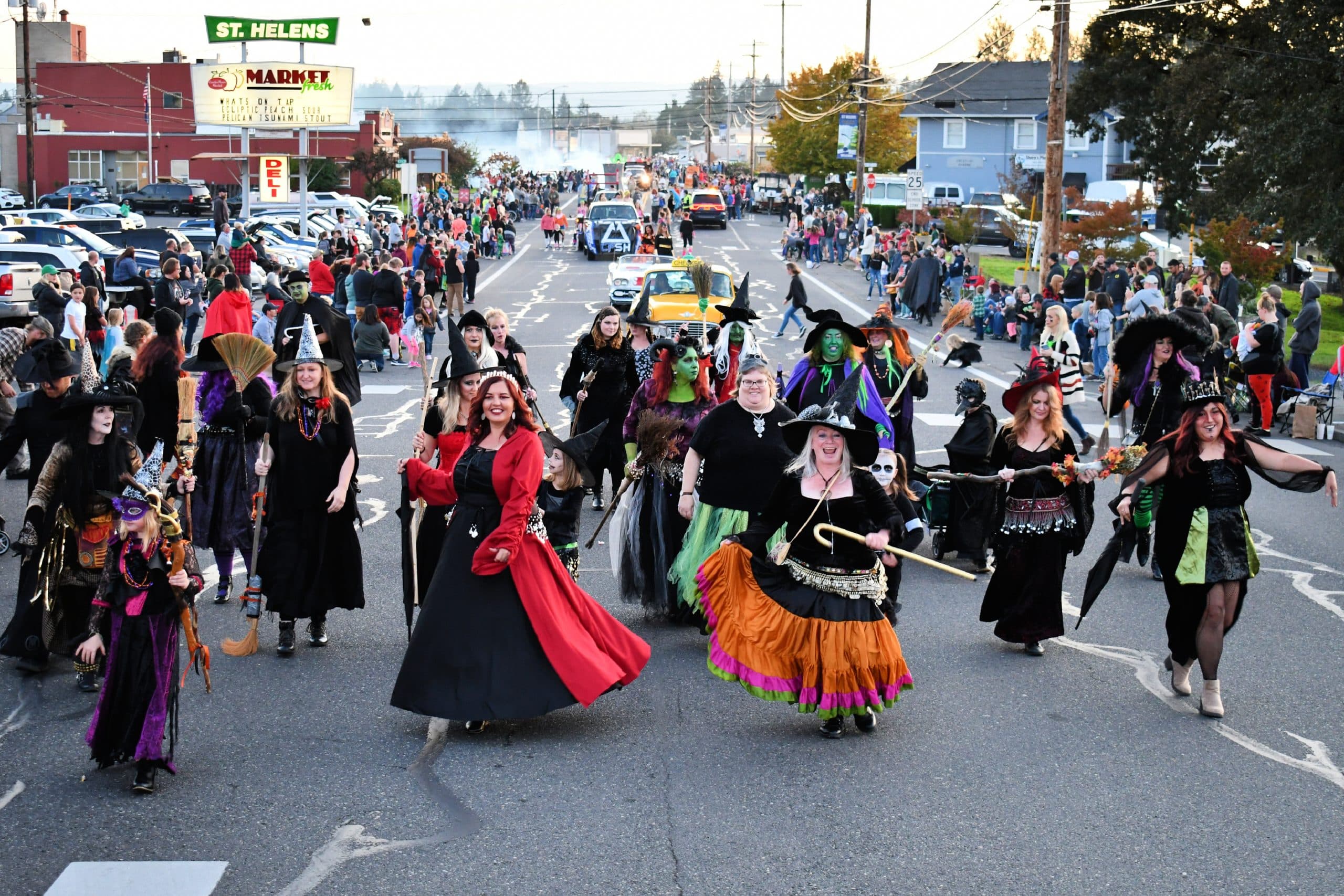 Take Photos In The Main Plaza

The Main Plaza is the perfect place for family photo opportunities. It’s open every day and is jam-packed full of pumpkins and Halloween decorations! We had our girls dress up in their Halloween costumes and took a ton of photos. Perfect for a Halloween scrapbook! 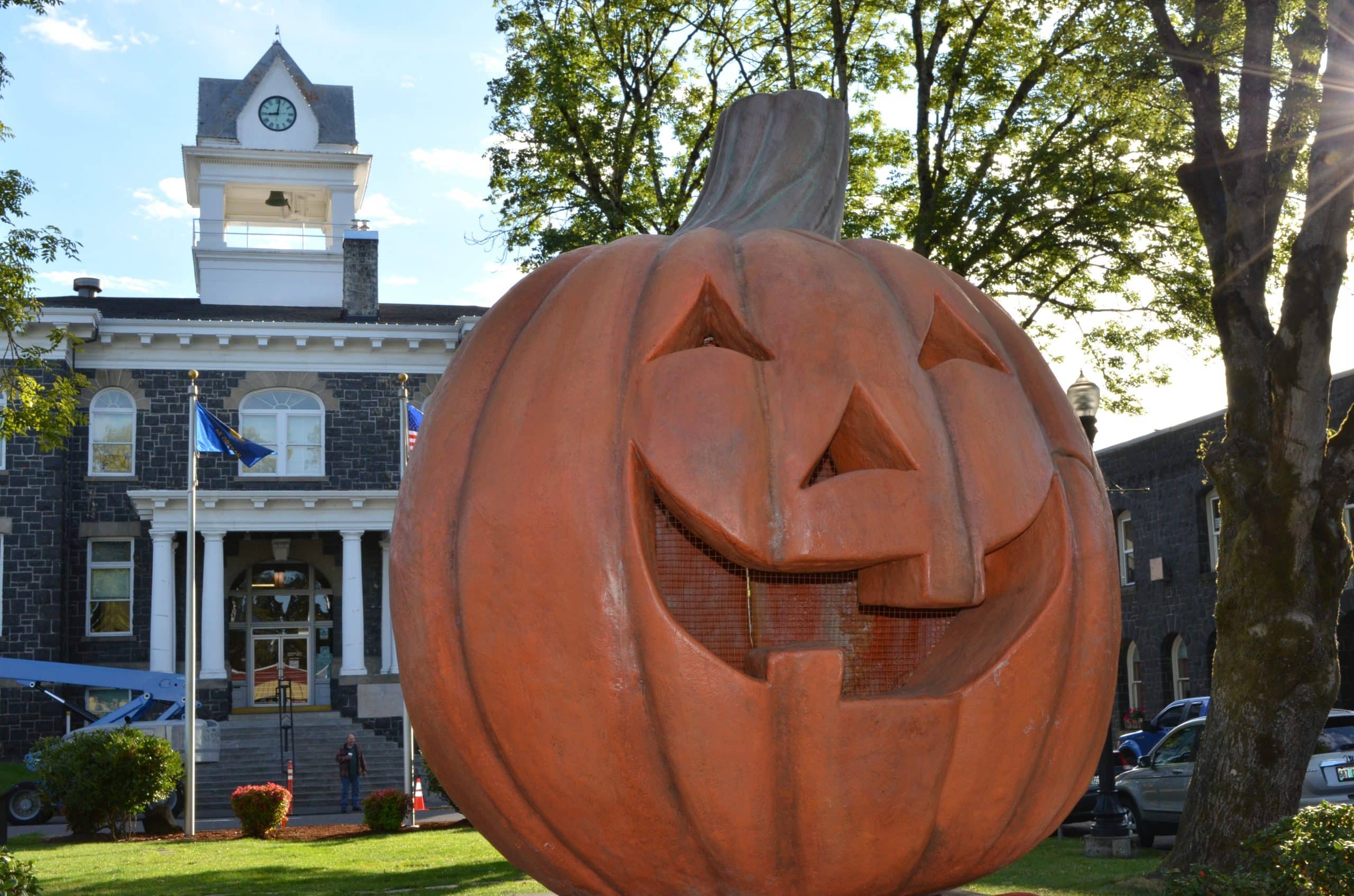 The giant pumpkin from the movie “Halloweentown” in downtown St. Helens © Spirit of Halloweentown 2022

On weekends the Vendor Village comes alive with fun Halloween activities. Face painting, tasty snacks, merchandise, and craft booths are just a few of the many things to do and see. The streets are packed with people dressed in costume, making it feel even more like you’ve stepped straight into the “Halloweentown” movie.

Which, by the way, I recommend you watch with your kids before coming! It’s a really sweet film and sets the mood perfectly for what you can expect when you arrive in St. Helens. The town even has some of the props from the film for Instagrammable moments, like the skeleton cab driver.

Get dressed up and strut your stuff — trust me, you’ll be in good company. Everybody (and I mean everybody) gets dressed up in St. Helens on the weekends. It’s just the thing to do.

And if you needed any more motivation to don a rockin’ costume, you might even win a little something out of it.

Every Saturday and Sunday at 1:30pm the town of St Helen’s holds a costume contest. Everyone is welcome! The categories are Family, Child, and Adult. The winners receive cash prizes, but to be honest I think I’d rather have a Halloweentown trophy. 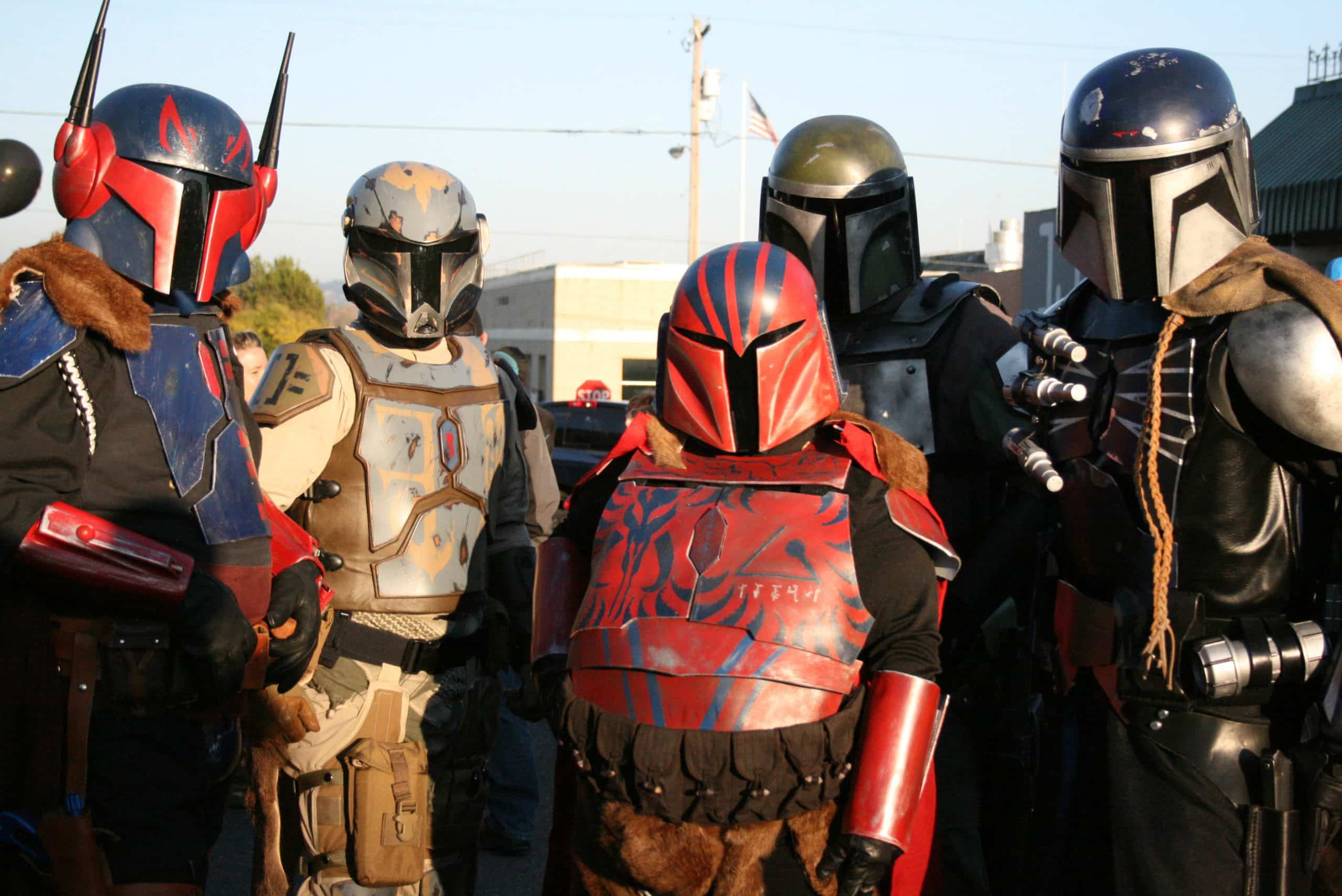 Along the riverfront district of St. Helens, you’ll find Pirate Cove. Every weekend these rapscallions entertain little sailors with stories, songs, and cannon shot fired across the Columbia River.

From 1:00pm to 3:00pm the pirates regale children with tales of nautical adventure and mystery. Our youngest loved it and proudly informed me that she wanted to be a pirate when she grew up.

Afterward, they light up the sky with smoke from their pistols, cannons, and blunderbusses. 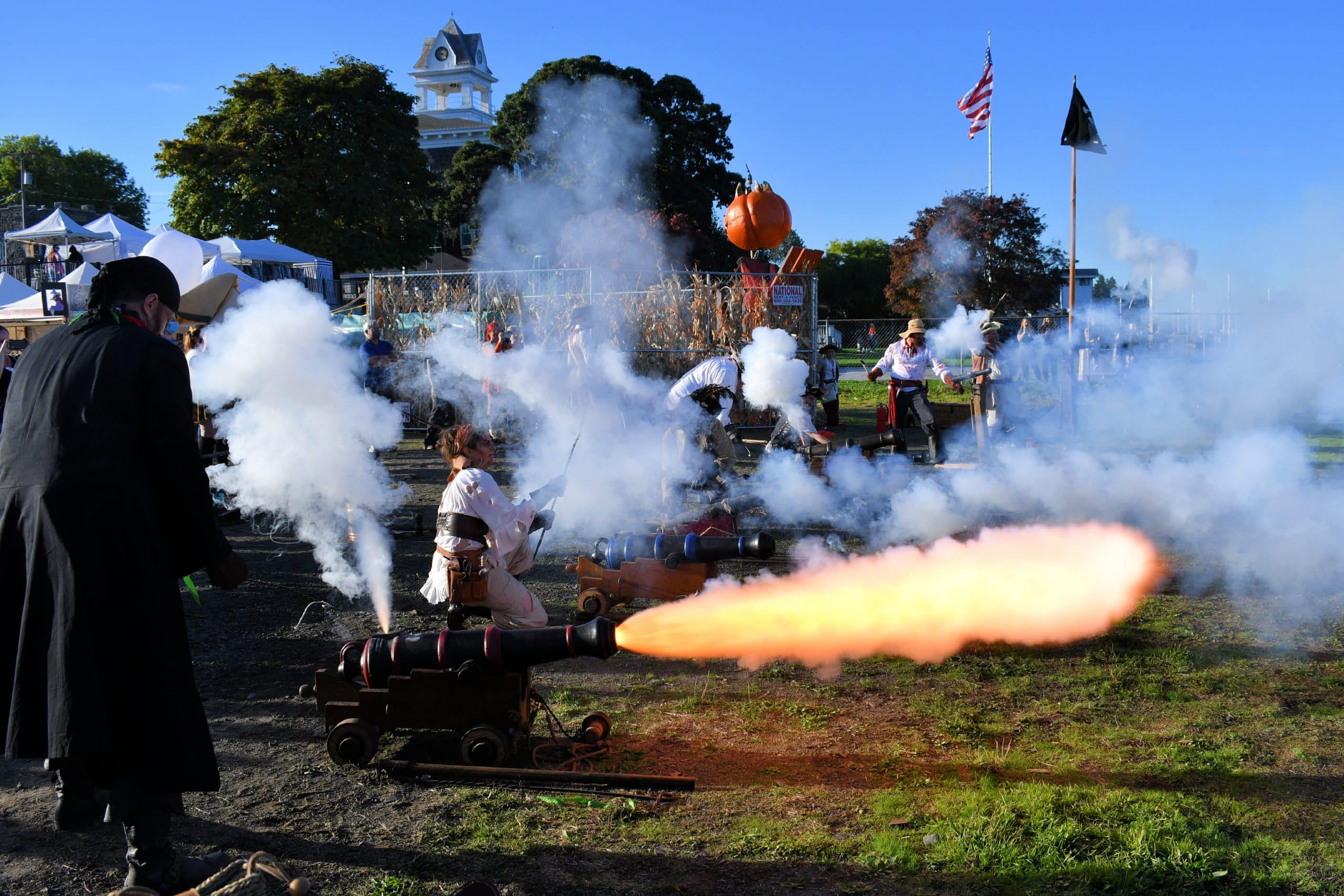 They say experiencing trials and tribulations is a good way to bond. Nothing could be truer than going through a haunted house as a family! My eldest daughter (who is too cool for me now) actually held my hand the entire way she was so spooked. (Our youngest, of course, wasn’t phased in the slightest when a woman dressed as Bloody Mary jumped out at her).

The Haunted House has been recently renovated and you can tell. The atmosphere is spooky but not scary. It’s a fun activity the whole family can enjoy.

You can find the schedule for the Halloweentown Haunted House here. 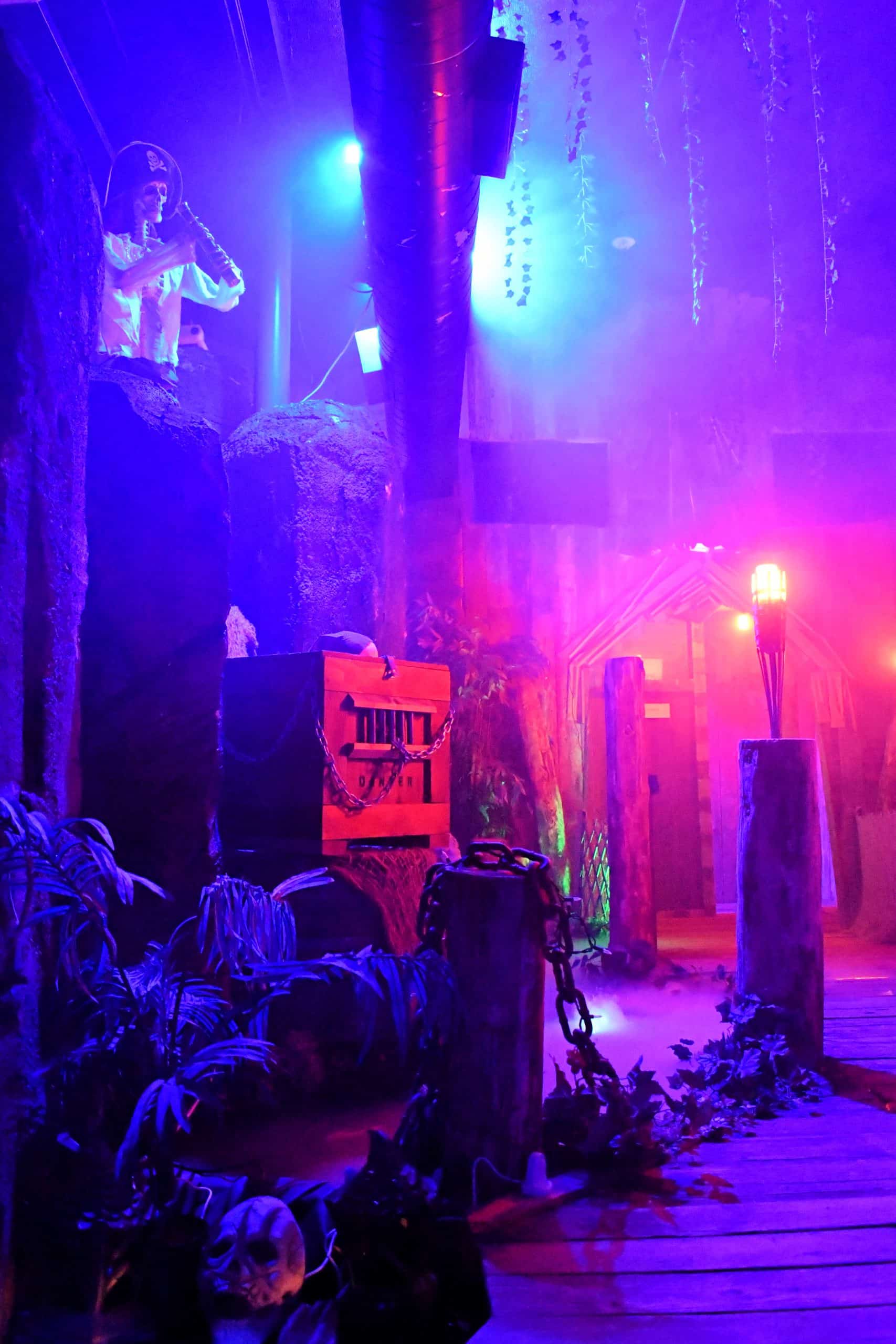 Moments before something spooky popped out 😂 © Spirit of Halloweentown 2022

How to Get to Halloweentown from Los Angeles

Located just 45 minutes from Portland, OR, it’s easy to get to Halloweentown from LA.

The fastest way to get there is to fly directly to the Portland International Airport, the largest airport near Columbia County. The flight lasts about 2.5-3 hours, which is just long enough for my youngest daughter to ask, “Are we there yet?” about a hundred times.

Start your research for flights with exclusive discounts from Scott’s Cheap Flights. Try out their free 7-day membership to save BIG money on flights. I’m not kidding. They have the best deals out there and we’ve tried them all, or so it seems. There’s no need to buy a membership (you’ll still have access to great deals).

Another excellent discount site for flights (and cars, hotels) is Expedia!

Driving from LA will take about 15 hours. If you’re down for a family road trip, it could be fun. There are tons of great spots along the way like Solvang, Santa Barbara, San Luis Obispo, San Francisco, and so on.

Don’t Miss! 9 Most Haunted Hotels In California For Brave Families!

Where to Stay in St Helen’s to Enjoy Halloweentown

The Best Western Oak Meadows Inn is located 15 minutes away from St. Helens town center. Convenient and cozy, this hotel also serves a complimentary hot breakfast that you can enjoy in your room or in the breakfast room. For those dedicated to getting the most out of their Halloweentown experience, this is the hotel for you.

Looking for an affordable getaway in Portland? The Holiday Inn Express is the perfect location. It’s situated in downtown Portland with access to shops, restaurants, and bars. St. Helens is less than 45 minutes away, so you can easily get there to enjoy the Halloweentown festivities.

Also in downtown Portland is The Nines, a Luxury Collection Hotel. Housed in a historical building, The Nines pairs tasteful grandeur with stylish modernity. Close by are trendy boutiques, fashionable dining spots, historical monuments, and popular attractions. Set out on foot or hop on a Street Car for the authentic Portland travel experience. Everything is near at hand when you stay at The Nines. 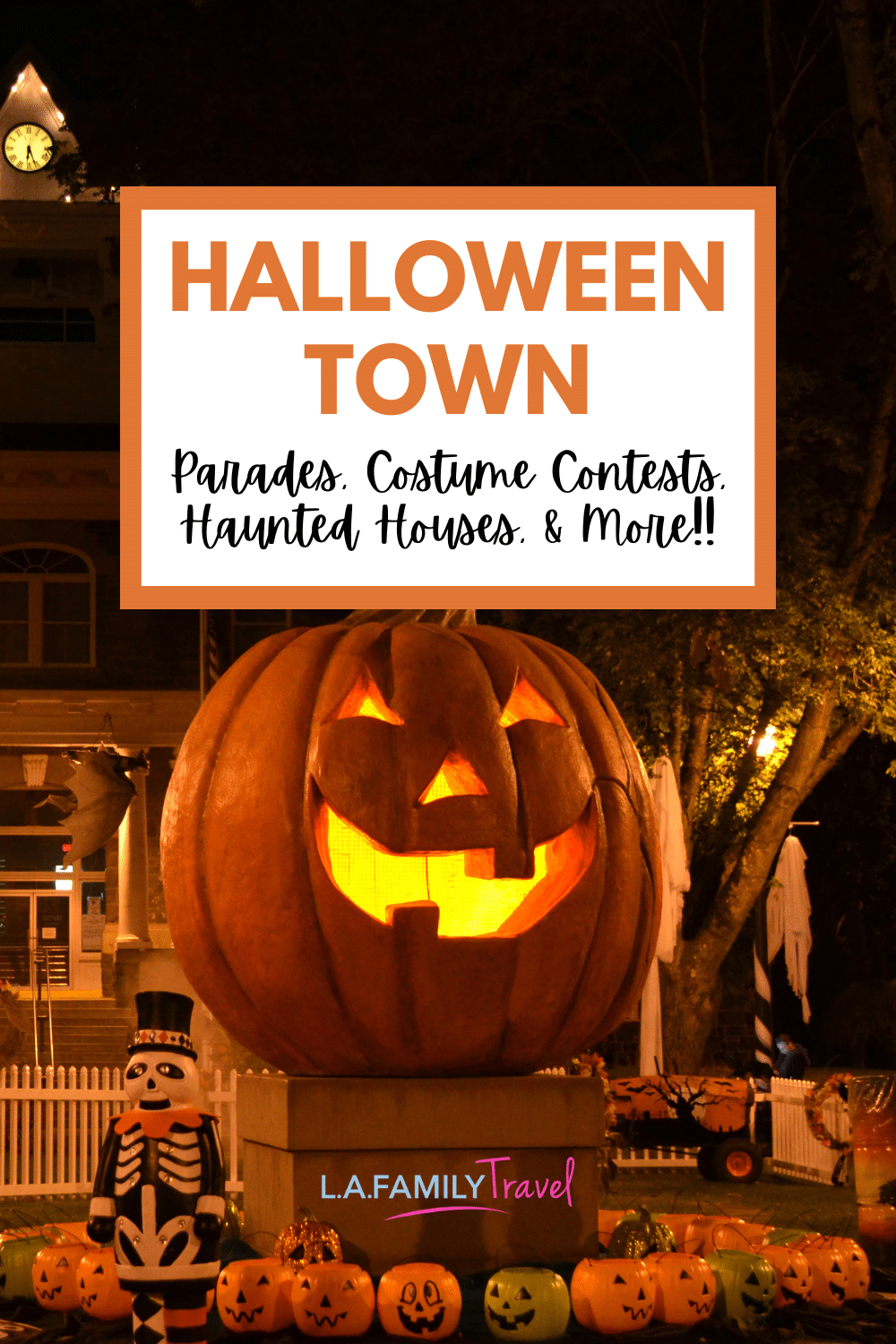 Matthew LaMourie is a travel writer and photographer based in San Francisco, CA. A natural explorer, he specializes in finding out of the way places, even in the most well trodden of destinations. When not on the road, he devotes his time to his loving family, his watercolor painting, and just walking around his adoptive city, ever curious to see what’s round the next corner.