Secret Redding: Discovering the Best 5 Things to do With Kids

Unless you have relatives in Redding or live nearby, chances are you haven’t gone out of your way to visit. It’s not en route to bigger cities like San Francisco or Los Angeles, nor does it have the fame of South Lake Tahoe.

What if I told you, though, that Redding is a great place you can take your kids? Not only is it sheltered from hoards of tourists, but it’s near some of the most phenomenal earthly wonders in California. Scratch that— in the entire United States. Having lived in Northern California all my life, I’ve gotten to spend many days of sunshine in the Shasta County sweet spot. We’ve taken our kids on several overnights and day trips to Redding, and each time, we return feeling like we’ve gotten an invigorating dose of nature. This place has been kept secret, and I’m here to share it with you. Here are the 5 best ways to experience Redding, enjoyable for kids of all ages.

NO TIME TO READ THIS ARTICLE NOW? PIN IT OR BOOKMARK IT FOR LATER! 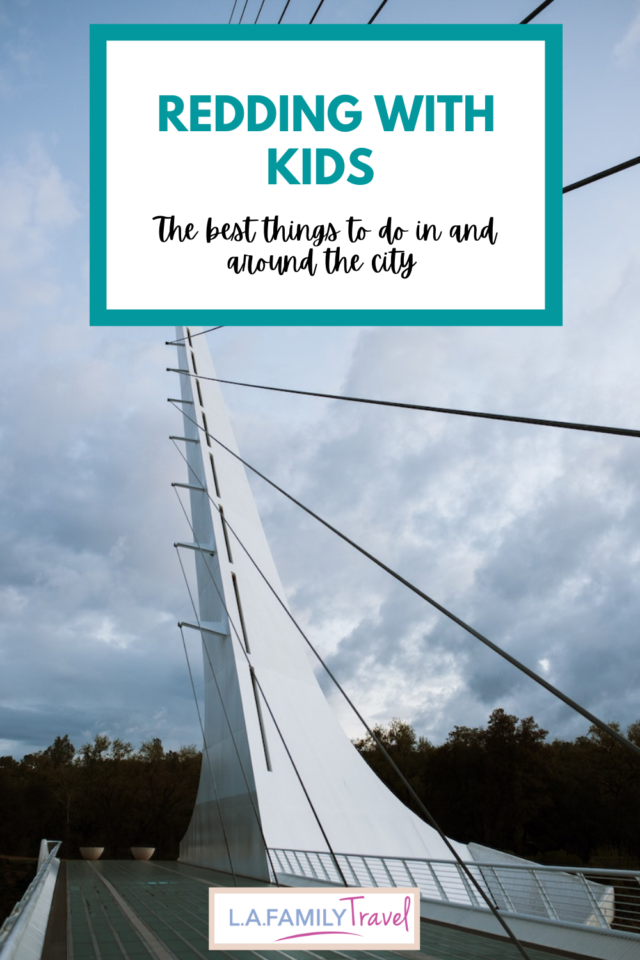 Now, I’m not renouncing my loyalty to Lake Tahoe. But Shasta Lake is breathtaking in its own way. We’ve never indulged in houseboating here, but we took a tour of the Lake Shasta Caverns a couple of summers ago, which included a boat ride across the lake. The tour was a good call on my husband’s part, because we got a panoramic view of the lake from the cave’s entrance, at the top of a mountain. My daughter was nerding out over the stalagmites and stalactites she saw inside the cave, which is 200 million years old! (And I was just glad she remembered what she’d learned in science.)

If you have time, don’t miss Shasta Dam, either. My son jokes that it’s the only time he’s allowed to use a swear word around me, so he uses it over and over and over again, lol. The Dam is a massive structure and we were awestruck as we walked along it and listened to the waters of the Sacramento River crashing along. 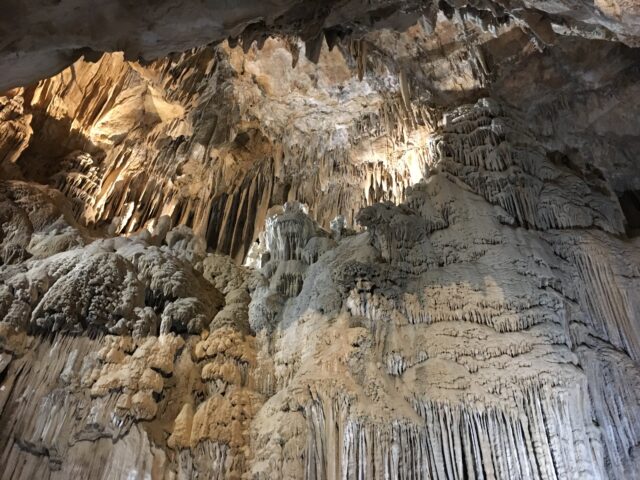 If these walls could talk, imagine the stories they’d share!

Don’t Miss! 7 Not To Miss Things To Do With Kids In South Lake Tahoe

Turtle Bay Exploration Park encompasses a half day’s worth of wildlife and local history. There are several fun things here, but most noteworthy are the museum, bridge, and animal encounters. The Turtle Bay Museum is a microcosm of the local area. We learned about the native people that originally settled the land, such as the Wintu, and how they used tree bark to make homes. The Turtle Bay Museum also has several fish tanks where you can get a glimpse of underwater fauna native to Redding like salmon and turtles.

By far our favorite part of Turtle Bay Exploration Park was the Parrot Playhouse, the epitome of family fun. Here we were able to buy cups of food and enter an aviary where there were a dozen parrots flying around. My son was hesitant at first because these birds have no shame in coming right up to you! One landed on his arm and started nibbling at his cup, and hung out even after it had finished eating. My daughter got one to land on her head (there wasn’t any pooping, thank goodness)! Since then, my kids won’t give up on asking for a pet parrot. They have other animals here, too. They’re part of a nature center and are given plenty of open space to roam about (though still in enclosures to maximize safety). We walked past a zoo-like area and saw bobcats, foxes, and snakes. 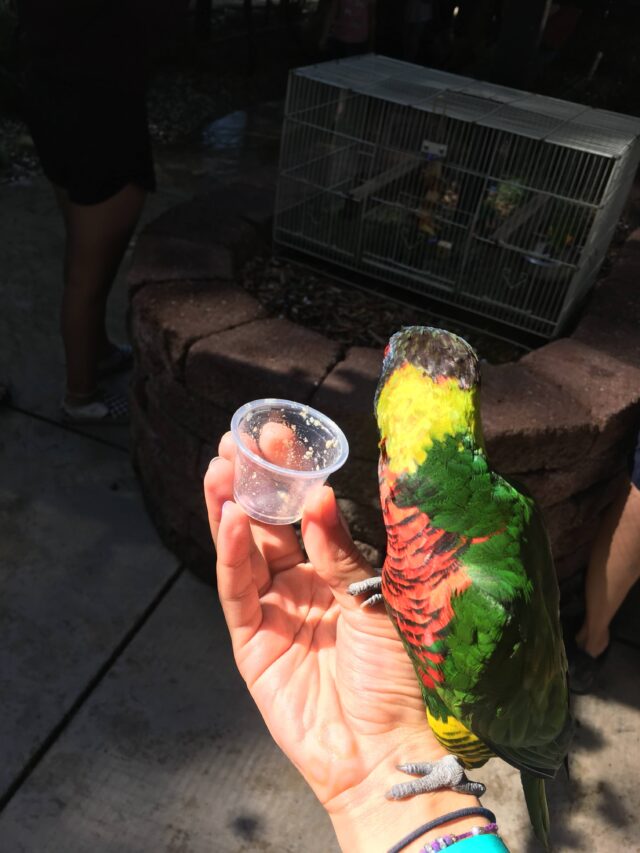 Looking for more food obviously took priority over smiling for the camera.

Though it’s part of Turtle Bay Exploration Park, I’d consider this bridge a landmark for the city itself. The remarkably engineered Sundial Bridge is, indeed, a sundial (one of the largest in the world apparently) and is also the best place to marvel at the Sacramento River. On a clear day, you can even get a view of Mount Shasta in the distance. We’ll take the short walk across the bridge, and my kids will race ahead, trying to outrun one another.

The other side of the bridge has the Arboretum & Botanical Gardens. I’ll drag everyone there so I can snap photos of the Dr. Seuss-like plants that grow inside. This is a great place to bring your kids in between higher intensity activities because of how quiet and calming it is. 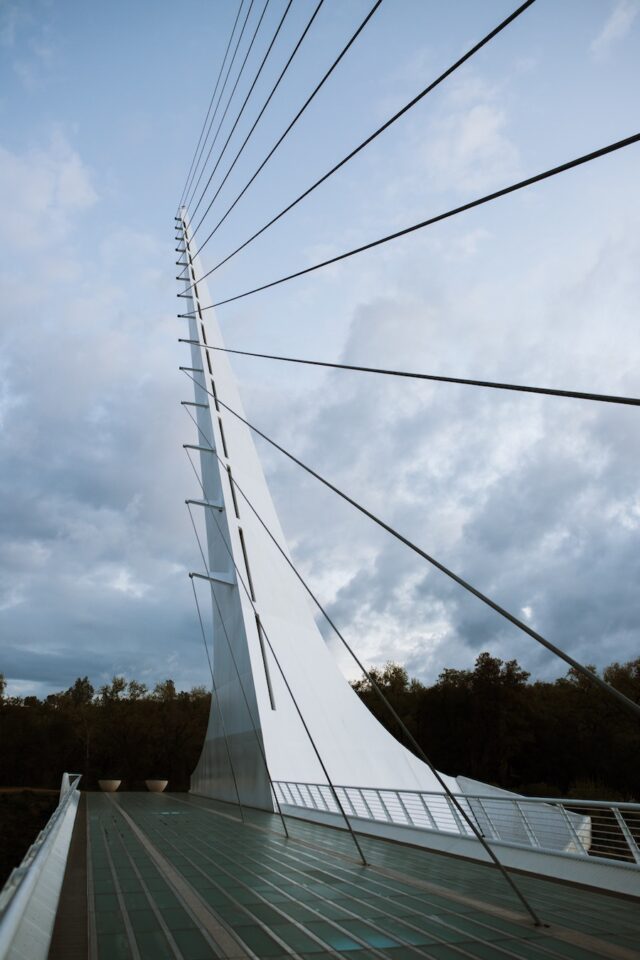 Isn’t she majestic? Photo by Caleb Woods on Unsplash.

Photos of this place speak for themselves. But I’ll try to do it justice with words. Lassen Volcanic National Park is to the east of Redding, about an hour and a half away. We only had a full day here, which was nowhere near enough, but we still had a spectacular experience. My favorite part was Sulphur Works, essentially the remaining activity of a dead volcano. The kids and I had never seen hydrothermal activity before, so we took our time on the viewing platform that they built for visitors. My daughter said that it felt like we’d momentarily gone to another planet, and that’s the best way I could describe it, as well.

My son was recovering from a cold so we didn’t do a longer hike as planned. But we still caught magnificent views from the Manzanita Lake Trail. We lost count of how many squirrels we saw (so many squirrels!) and I had to keep pinching myself because it felt like we were in a painting. As far as nature trails go, the Manzanita Lake Trail is supposed to be one of the best here because of its stunning views of Lassen Peak.

Redding is a great place you can take your kids! Not only is it sheltered from hoards of tourists, but it’s near some of the most phenomenal earthly wonders in California. Scratch that— in the entire United States.

DON’T MISS! Vancouver With Kids: How to Spend the Best Long Weekend!

If you’ve been to Yosemite National Park, you’ve seen awe-inspiring waterfalls. I’m here to tell you that those look average compared to what you’ll see at McArthur Burney Falls Memorial State Park, also known as Burney Falls. Turquoise waters mix with foamy white water to create a view that’s both misty and mesmerizing. A friend of mine said it reminds her of Iguazu Falls in South America but on a smaller scale.

Though it’s an hour from Redding, I recommend going if you have time. We did the Burney Falls Loop Trail, which was an easy one-mile hike, and brought our own picnic lunch. There are other hikes you can choose from. It’s a popular attraction, so be prepared to share the views with larger crowds on weekends and holidays. 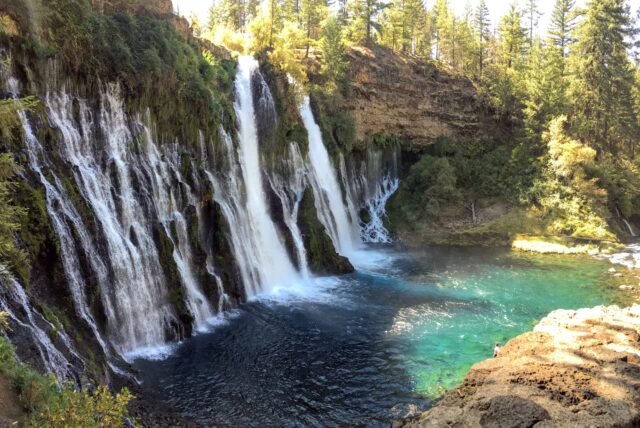 Trust me, it’s even more jaw-dropping in person.

United Airlines has nonstop flights from LAX to Redding that take an hour and forty-five minutes. Alaska Airlines also has flights, though they’re nearly six hours and have a layover. You can also fly directly into Sacramento or San Francisco and turn it into a little road trip. If you drive from LA, it will take you about eight and a half hours, depending on traffic of course.

One of the best things about Redding: accommodation is far more affordable than in most coastal cities. For a room that’s budget-friendly, I’d suggest the Ramada Limited Redding. It’s a short drive from food options and the main attractions in the city. If your family wants a stay in the middle range, go to Holiday Inn Express & Suites Redding. It’ll give you a cozy place to rest and recharge after a long day out. You can even choose to stay at Shasta Lake, either in a room or a houseboat from Bridge Bay. Finally, if you’re looking for somewhere to unwind that’s a mix of familiar and luxurious, private homes are a great option to scope out. Put in your stay dates in the field below and see all the price options of several charming homes to suit your family members, from lofts to cottages, in and around Redding.

Redding… She’s full of natural wonders and is one of the best-kept secrets in North America. When you visit Redding, you’ll get real-life water parks, breathtaking state parks, and surreal national parks. Though we’ve been many times, I know there’s still much waiting to be explored on our next family trip. These are the best places my family’s experienced in and around Redding. If you’re looking for a getaway full of natural beauty for the whole family to enjoy, this is the perfect place. 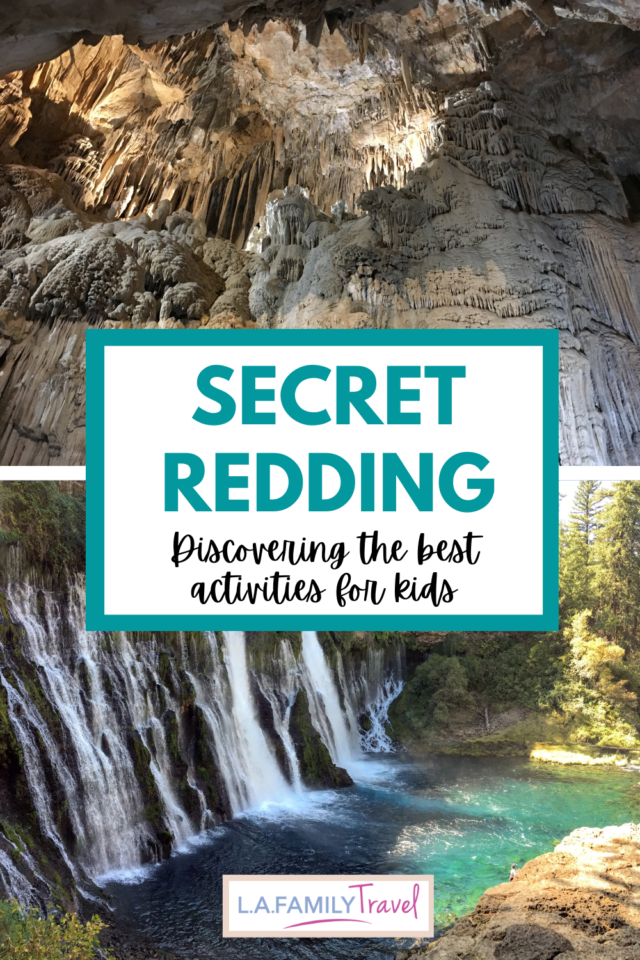 Brina Patel is a freelance writer from Northern California. She holds a BA in Psychology from UC Santa Barbara and worked as a behavior therapist for children on the autism spectrum prior to pursuing a writing career. Her wanderlust was sparked when she studied abroad in London during her junior year of college. Travel has become a non-negotiable part of her life ever since. When she isn’t writing or adventuring, she enjoys reading, painting, and spoiling her sassy Maltese.