Vancouver With Kids: How to Spend the Best Long Weekend! 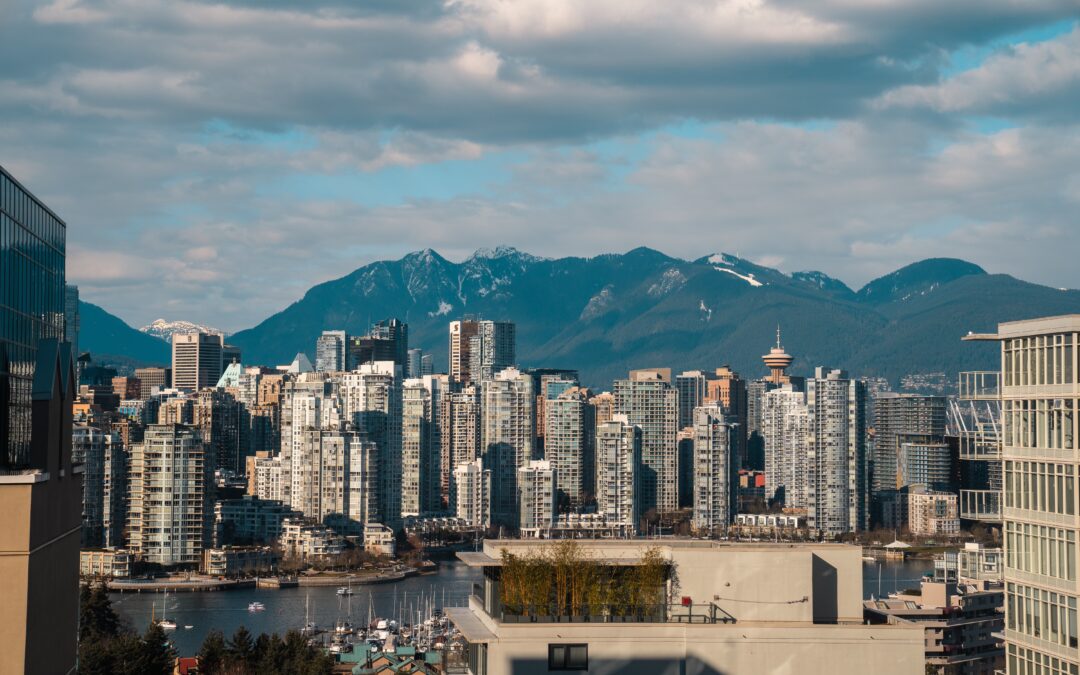 I'll be honest with you. Family trips north of the border were never on our radar. Cancún? Count us in! Costa Rica? Yes, please! Bahamas? Don't have to ask us twice!

But then a good friend of ours spent a week in Canada with her family and told us what a blast they all had. And that got me thinking, "Have we been missing out?" A few clicks and a late-night Google session later, we were on our way to Vancouver with our kids for a long weekend. Whether your kids are outdoorsy, science geeks, or full-on foodies, Vancouver has plenty for them (and you!) to enjoy. Here are the best things we found to do with kids in and around Vancouver.

NO TIME TO READ THIS ARTICLE NOW? PIN IT OR BOOKMARK IT FOR LATER! This isn't your average neighborhood green space. Stanley Park boasts over 1,000 acres of beaches, trails, waterslides and a playground. We spent half a day there, and my kids loved running around on the play area near the Rose Garden. Afterward, we took a leisurely stroll along the Seawall, where we saw a lot of joggers and bikers taking advantage of the 17-mile path.

Stanley Park also happens to be home to Canada's largest aquarium, the Vancouver Aquarium. We paid a quick visit, and my kids marveled at the jellyfish and cuddly sea otters. There was also a touch pool, where we got to feel red cucumbers and green sea anemones. It was surreal seeing thousands of sea creatures that were native to British Columbia, but also endangered around the world. The aquarium commits itself to sustainability, so you'll feel good knowing that your visit helps vulnerable animal populations. 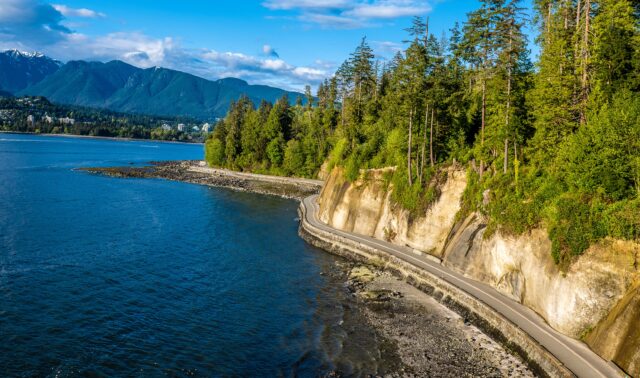 We've been on a lot of walks, and this was one of THE best. Photo courtesy of Dream Capture Photography on Unsplash.

Deemed "the Peak of Vancouver," Grouse Mountain feels like a world away from the metropolitan buzz of the city. What I loved about this excursion was that admission included a bunch of activities. We went on the Skyride, a 1-mile tram ride that boasts jaw-dropping views of the city below, as well as the evergreens of the mountainside. One of the options was to ride on TOP of the gondola called a Surf Adventure. My kids had a great time at the Lumberjack Show, a comical performance by two flannel-clad men as they chop wood and climb a tree. When we went, disc golf wasn't yet an option. But Grouse Mountain now has an 18-hole course where families can play against the backdrop of the Pacific Ocean below. Other activities like the Peak Chairlift, Wildlife Refuge, and self-guided tours through the forest are also included in your admission ticket.

You can either buy a Family Ticket (2 adults and 2 children) or individual admission. Ticket prices are listed on their website, and be sure to buy online, as they sell out fast. Once you're up here, good luck convincing your kids to return to civilization!

Don't Miss! A Local's Guide To The 11 Best Family Friendly Things to Do in Chicago

Alright, foodies— this one's for you! Hop on over to Granville Island for its epic Public Market. Here, you'll find seafood, fresh produce, and bites from around the world. Between picky eaters and my own dietary restrictions, I'm ecstatic when we go somewhere that has a range of options. My kids had the fish and chips, while hubby and I shared a couple of vegan Vietnamese dishes. We couldn't resist the fresh-squeezed juice, as well as indulging in some donuts. It was summertime when we went, so it was great getting to eat our meal outside by the water.

To blow off some steam after lunch, we took the kids to Adventure Zone, an indoor multi-level jungle gym. Adventure Zone also had a ball pit and an arcade, which kept us busy for over an hour. There were several shops on Granville Island, too, which sold handicrafts and unique souvenirs. We treated our kids to new dolls and toy cars from The Granville Island Toy Company and took them to Clownin' Around Magic for some laughs as they played around with prank props. 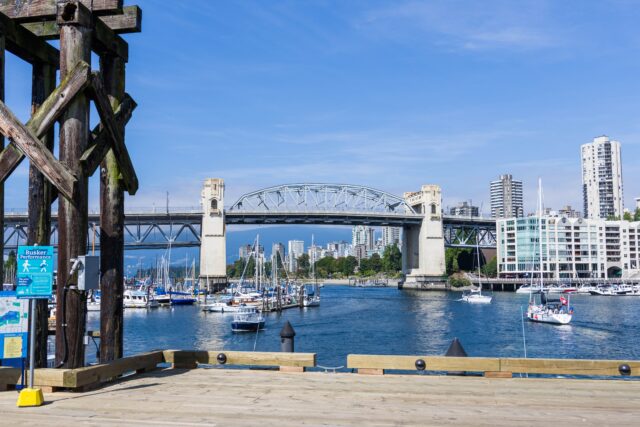 People watch and count sailboats as you munch your way through the market's delicacies. Photo courtesy of Jason Yeh on Unsplash.

FUN FACT: This park has been visited by millions of people since 1889, including celebrities and royalty.

That was enough for me to add this to our itinerary, and after visiting the park, I understood the hype. True to its name, Capilano Suspension Bridge and Park consists of a 450-foot bridge that hangs over the Capilano River. As we walked across, I couldn't help but feel like an ant in comparison to the vast forest of evergreens that surrounded us. In addition to the bridge, we did the Cliffwalk, which was a labyrinth-like composition of stairs, platforms, and bridges. My kids had a blast on the Treetops Adventure, a set of suspension bridges that were attached to 250-year-old Douglas firs. Needless to say, we got our steps in after our visit here.

We also took advantage of the history and nature talks, which taught us about the First Nations people, and gave us background on the bridge itself. I'm hoping that our next visit will coincide with the holiday season, as the canyon and river are illuminated with lights, which seems like it would be a mesmerizing experience.

Admission includes access to the aforementioned attractions, plus several more. Reservations are recommended and can be made online.

Whether your kids are outdoorsy, science geeks, or full-on foodies, Vancouver has plenty for them (and you!) to enjoy. Here are the best activities we found to do with kids in and around Vancouver.

Perhaps the most memorable part of our Vancouver getaway was our day trip to BC's capital, Victoria. We took a ferry from the Tsawwassen Terminal in Vancouver. It took an hour and a half one-way to reach Swartz Bay, located right outside of Victoria and was a delight of its own.

Once we reached Victoria, we first went to The Butchart Gardens, where we saw vibrant flowers like the Himalayan Blue Poppy and Hybrid Tea Roses. Afterward, we visited the Victoria Bug Zoo. Though I'm quite squeamish, my kids and husband enjoyed gawking at glow-in-the-dark scorpions and giant walking sticks. Castles are something we never say "no" to, so we rounded out our day with a visit to Craigdarroch Castle, which made us feel as if we'd time-traveled back to the Victorian era. The Butchart Gardens - The closest you'll ever get to Wonderland!

Though my kids prefer reading and writing to the STEM fields, to say they were amused at Science World would be an understatement. Here they have several interactive exhibitions. My little ones liked BodyWorks, which teaches kids about the human body, from the invisible to the microscopic. We learned a lot about water, waste, and transportation on the TD Environmental Trail. The museum also has a puzzles and illusions section, which gave my kids much-needed brain teasers (especially since it was summer break and they'd been out of school for nearly a month). Tickets can be booked online and range from $14-$23 for everyone 3 and older. Children under 2 are free to enter.

Air Canada and West Jet offer nonstop flights from LAX to YVR. We love to search around and often use Expedia.com - Flights

as our go to resource for the best deals. You can also play around with the search box from CheapOAir below:

Whether you're looking for an economical option or want to go all out, there's no shortage of quality accommodations in Vancouver. The Barclay Hotel is close to Stanley Park, while the Three Kittens Guesthouse provides something homier. It's located just outside Vancouver in Burnaby, but close to a SkyTrain station that connects to the city.

In the middle range, there's the Days Inn by Wyndham Vancouver Downtown or Hotel Belmont Vancouver. Both are near Canada Place Terminal and within walking distance of shopping and dining options. The Fairmont Pacific Rim will give your family a top-notch experience. It's near Stanley Park and houses a spa, sushi bar, and an outdoor, rooftop pool.

You could also compare the hotels through Booking.com which searches for the best deal for you so you could use the money you save to do more fun stuff!