The Best Things to See in 48 Hours in Salzburg 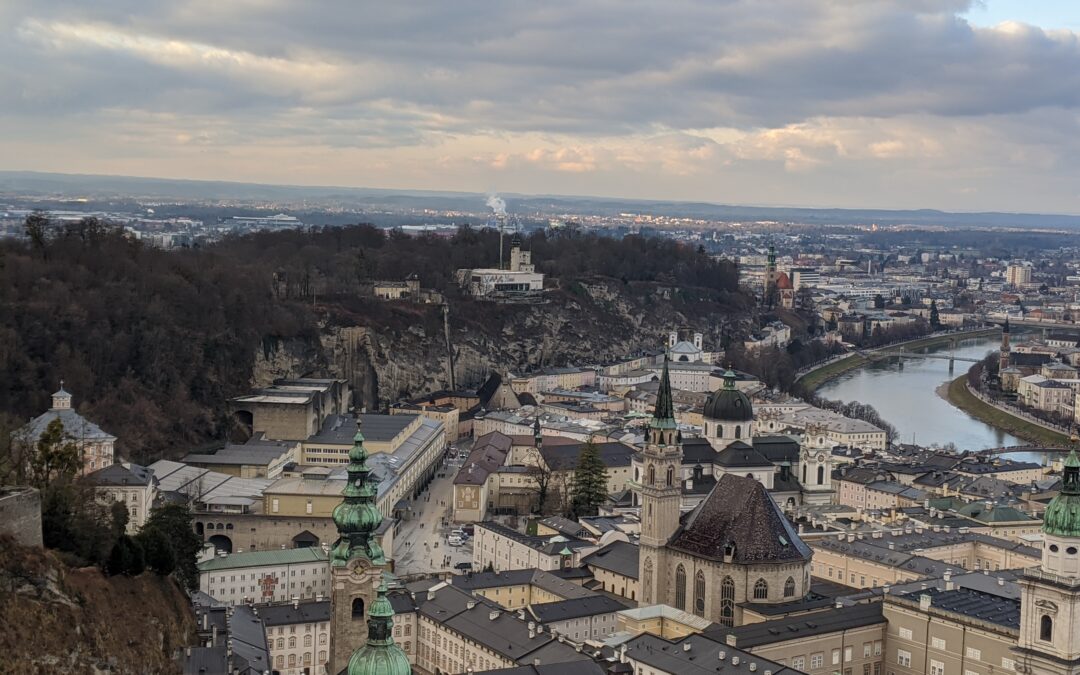 If you're planning a trip to Austria - Salzburg likely falls low on your list of places to visit. You'll likely put it well below bustling Vienna, charming Innsbruck, and Insta-worthy Hallstatt.  In fact, if you're not a raving Sound of Music fan, like me, there's a chance you haven't even heard of Salzburg.  But, having spent time in Vienna, Innsbruck, Hallstatt, and Salzburg, it might surprise you to learn that Salzburg was far and away my favorite. And not just because walking through the streets gave me major Christopher Plummer flashbacks.

Going weak at the knees over here.

Salzburg is a charismatic, easy-going city, with all the amenities of a booming metropolis, but more low-key and relaxed.  It was the perfect pace for our young family.  There was plenty to see and do, but we took our time.  Whereas, in Vienna, there was a frenetic energy pushing us along, Salzburg was more conducive to casual meandering and exploring side streets and mountain paths.  And the history of the city was fascinating, not just for adults but for kids as well.  There's something about poking around in the hidden enclaves of a Baroque fortress perched high on a hill that gets even the most history averse kid interested.

The city is manageable enough to where it can be seen in just a few days, a pit stop on the way to Germany or Switzerland.  So if you've got a day or two to spare, make the stop!  Use our list of all of our favorite must-dos in Salzburg.

Climb to the top of Fortress Hohensalzburg 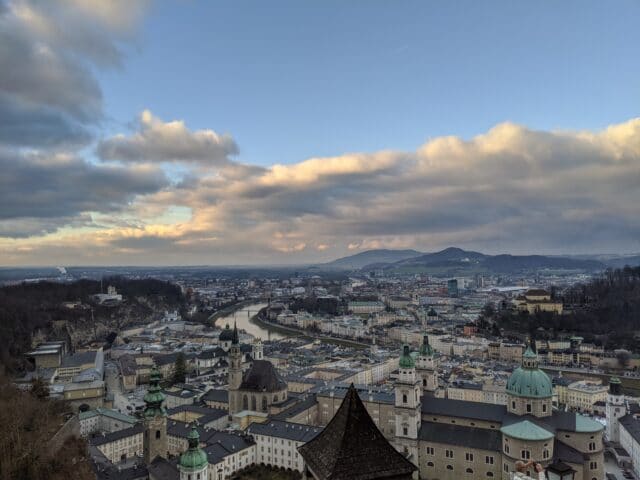 One of the magnificent views from the top of the Fortress Hohensalzburg.

Quite possibly my favorite part of the trip, Fortress Hohensalzburg is a baroque fortress built into a cliffside overlooking the city.  You can reach it via the Fortress Funicular, a cable car that transports you to the top, or you can make the climb on foot, through the steep cobbled streets of the Baroque Historical District.  If you have little legs with you, we recommend taking the cable car up and walking back down.  But if you're game for it, the walk up is great exercise and takes you right through the quaint little twists and turns of the Baroque Historical District.

At the top, the Fortress is like a mini-city within a city.  Commissioned in 1077, but completed in the 1500s, the Fortress transports you back to another time, when doorways were short and central heating was not a thing

So, word to the wise – if you go in the fall or winter, dress warm! 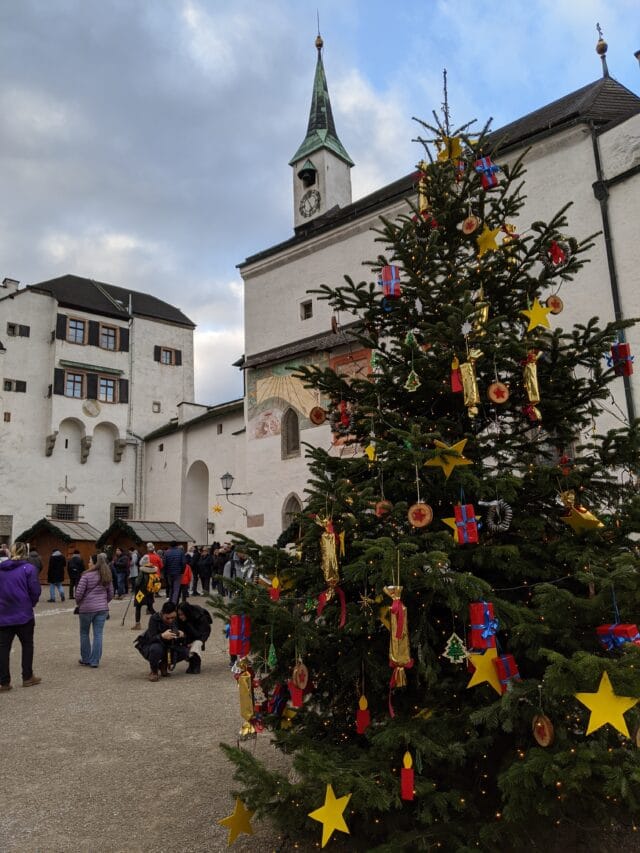 The adorable Christmas market at the top.

At its heart is an open-air courtyard.  We went in late December, so the courtyard was experiencing its final days as a Christmas market, with decorations and a few food vendors peddling fresh hot pretzels, gluhwein, and hot chocolate, the perfect snack after the long trek up.  There's also a cute, if not slightly creepy, marionette museum at the top that is great fun for kids.  On either side of the fortress are additional courtyards that look out over the city and offer the best panoramic views of Salzburg and the wide sweep of Austria and the Alps beyond it.  It's a perfect Instagram moment.

Hum a Tune at the Mirabellgartens 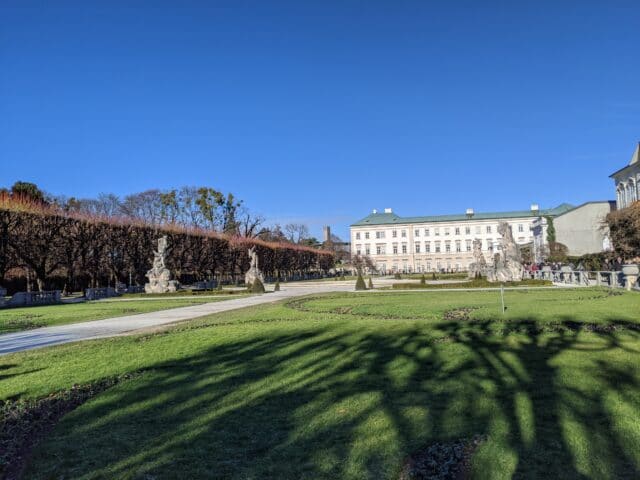 If you've seen the Sound of Music, you're familiar with the sprawling Mirabellgartens in which Maria and the Von Trapp children sing "Do Re Mi".  Today, they're still exquisitely manicured, with bushes trimmed into ornate curlicues and grass cut so perfectly you wonder how they managed to get every single blade exactly the same height.  In the background, the Fortress Hohensalzburg rises up like an ever-present sentinel over the city.

The gardens are usually teeming with people moseying through on their way to somewhere else, or partaking in one of the city's many Sound of Music tours.  But grab some sandwiches at a cafe or street vendor, find an out of the way bench, and have yourselves a little family picnic.  You'll be hard-pressed to find a better spot.  Although, prepare yourself to hear little snippets of "Do Re Mi" from passing tourists at least a half dozen times while you enjoy your lunch.

Planning a trip to Austria? Salzburg should be on your list of places to visit. One Sound of Music mom-fan tells you why! 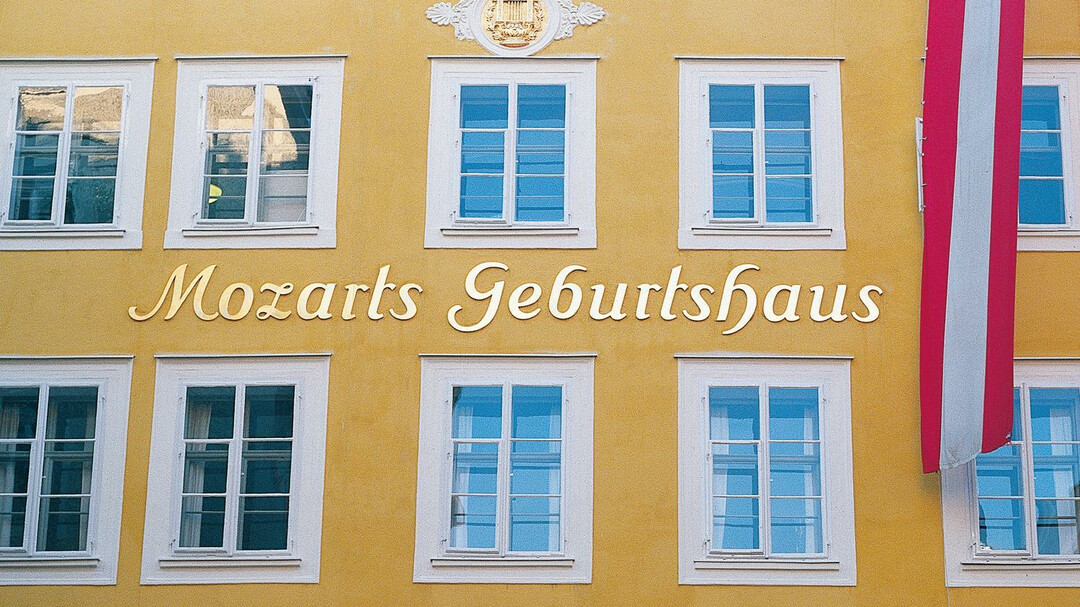 I'll confess to usually being a little underwhelmed when I see the childhood residences of famous people.  For public figures who end up becoming larger than life, I always expect to see these huge monumental birthplaces.  In reality, they're usually very modest, with nothing really distinguishing them from the buildings around them except for a small plaque on the door.

The birthplace of the famous eighteenth-century composer Wolfgang Amadeus Mozart, however, is a little hard to miss, considering it's written in giant letters across the front of the bright yellow building.

Located in the Getreidegasse in the heart of the old historic district, the cheery walk-up that now doubles as a Mozart museum is typically thronged with tourists snapping photos and selfies out front.  Though we opted not to go to the museum, the house itself is definitely worth a walk by, if for no other reason than to experience a little piece of history.

Partake in All the Local Food

Like many of its European neighbors, Austria has truly fantastic food.  With influences from nearby Germany, and from Eastern Europe as well, their dishes are hearty and flavorful.  Stews and meats are their specialties, as are their strudels and pretzels.  Once you've had a hot pretzel in Austria, you'll never be able to go back to a movie theater hot pretzel again.

If you have time, grab dinner at Zum fidellen Offen (also known as the Jolly Monkey in English) which specializes in authentic Austrian dishes like schnitzel, goulash, and strudel.  Their beef goulash was amazing, as was their very rich macaroni and cheese.

Weave your way through the cemetery at Petersfriedhof 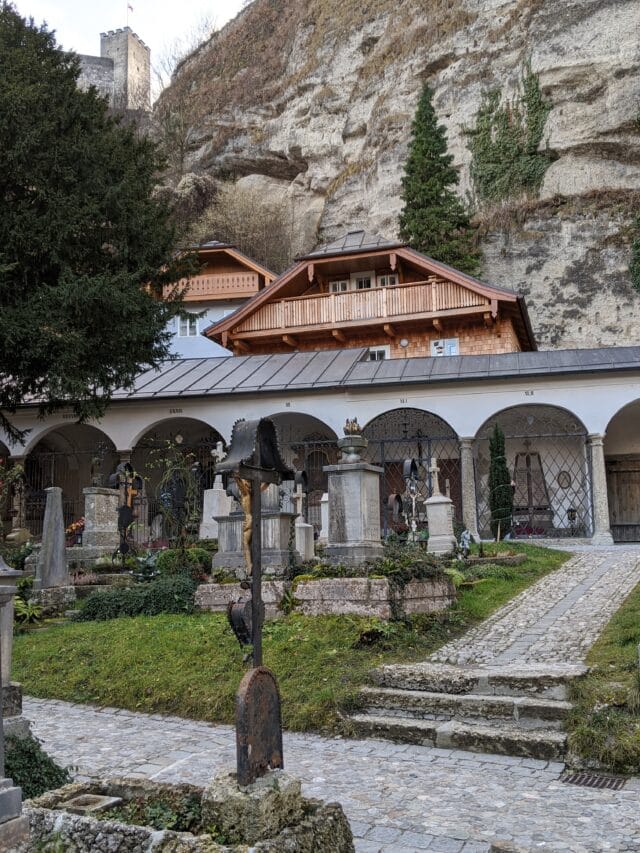 The Cemetary at Petersfriedhof was so beautiful and peaceful.

A little known fact about Salzburg is that it is full of churches, cathedrals, abbeys, and monasteries.  So much so that it has earned the nickname of the "Rome of the North."  To try to visit all of them in just a day or two is a bit of an undertaking.  But there are a couple you definitely shouldn't miss.

One such cathedral is St. Peter's Cathedral (or Petersfriedhof) in central Salzburg.  The cathedral is famous both for its architecture (which incorporates elements from several time periods due to fires and other accidents over the centuries that required renovations), its music halls that have welcomed some of the world's best composers and also for its cemetery and catacombs.

Though the catacombs are admittedly not the most child-friendly attraction (or adult-friendly if you spook easily), the cemetery is very historical and unique, tucked in between the cathedral and a cliffside.  The grounds are beautiful and very well-maintained, especially given that many of the headstones date back hundreds of years.  Most of them are covered in large floral wreaths or have small garden plots adorning the top of the graves, making it one of the prettier, more peaceful cemeteries I've visited.

For Sound of Music fans, the cemetery served as the hideout for the Von Trapp Family when they were making their escape from the Nazi soldiers.  Though this tidbit had little to no effect on my family, I thought it was pretty cool.  Definitely a must-see for history and pop-culture fans alike.

Don't Miss! The 7 Things You Must Do On Your Family Trip to Zurich 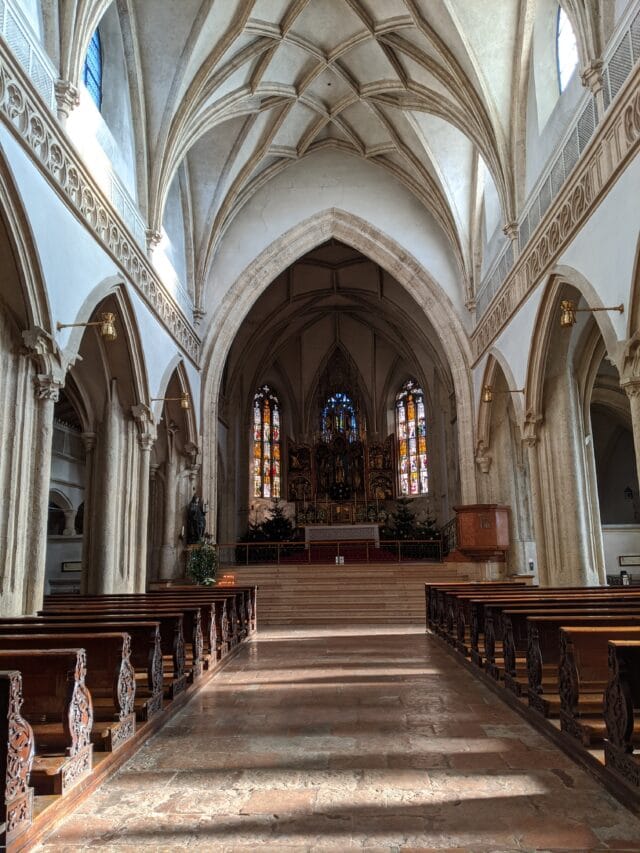 The Chapel at Nonnberg Abbey.

Another must-see church in Salzburg is Nonnberg Abbey.  Very much off the beaten path, we happened upon it one morning when we were out exploring before we even understood its historical significance.  Dating back over a thousand years, the abbey still maintains relics and artwork from the 1300s, which was difficult for our minds to comprehend.

Visiting the abbey is surreal given how old it is and the fact that it was still in operation.  Situated on a hilltop overlooking the city, the abbey is relatively secluded, and even though it's still functional, it appeared empty when we visited.  Whereas in other churches we would see at least a few modern amenities, like TVs displaying welcome messages, security cameras, and people with iPhones or headsets for guided informational tours, the abbey had none of that.

In fact, after spending some time in their modest worship hall on a cold day and nearly freezing our butts off, I'm fairly certain they don't even have conventional heat.  It was a very unique experience.  Like everything else in Salzburg, the abbey does have a Sound of Music tie - it's where the real Maria Von Trapp lived prior to taking on the role of governess for the Von Trapp Family. 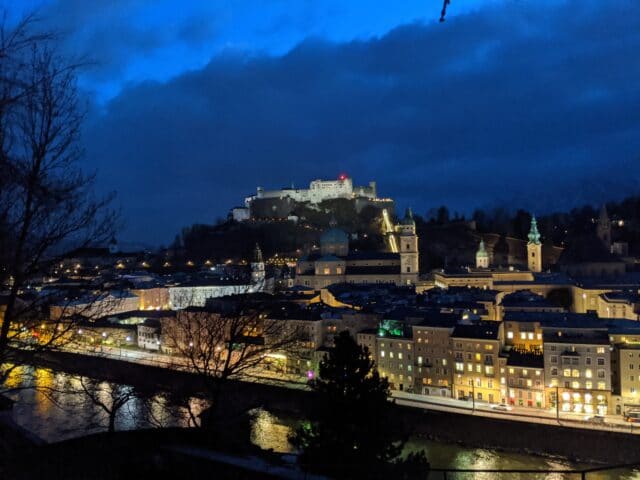 This view was worth the hike to the top!

If it hasn't become apparent yet, my family loves to explore when we travel to a new city.  If there's a path that looks interesting, we take it, the less-traveled the better.  Most of this can be chalked up to my never-ending curiosity, which I think my husband finds both annoying and endearing, depending on whether or not it leads us to good drinks and good food.  But I'm hoping it's a trait our kids pick up as well.

It's this curiosity that landed us in the Kapuzinerberg, a small forested area in the city proper with hiking trails leading up a cliffside to an idyllic little lookout spot near the top that boasts amazing views of the Fortress Hohensalzburg. The cliff is home to a couple of small churches, as well as Capuchin Monastery that resides at its peak.  Rumor has it chamois have also taken up bunk on the cliffside, though we weren't lucky enough to see any of the mini-mountain goats.

The hiking is manageable, even for kids, and the scenery is beautiful.  If you enjoy spending a little time in nature, Kapuzinerberg is not to be missed.

Don't miss The Trick That Saved Our Family Trip Through Austria

Getting to Salzburg from Los Angeles is relatively easy.  Most major American and European international airlines offer routes to and from.  Be prepared to have a layover somewhere, though, as direct flights between L.A. and Austria are few and far between.

When it comes to places to stay, Salzburg has a little something for everyone.  For the traveler on a budget, we recommend the Holiday Inn Salzburg.  Looking to splurge a little bit?  Then the Hotel Sacher Salzburg can't be beat, with a central location overlooking the river.  We stayed at the Hotel Amadeus, a nice middle-of-the-road option that we loved for it's charming authenticity, spacious rooms, and refurbished bathrooms.  They also served complimentary cookies and coffee every day in their small café, which didn't hurt.  But we can't recommend their hotel enough!

We didn't really know what to expect when we were planning our visit to Salzburg, but we quickly fell in love with the town and hope to go back!  If you're planning a trip to Austria or any of its neighboring countries, Salzburg is definitely worth a detour.