What to Do in Leipzig, Germany with Kids 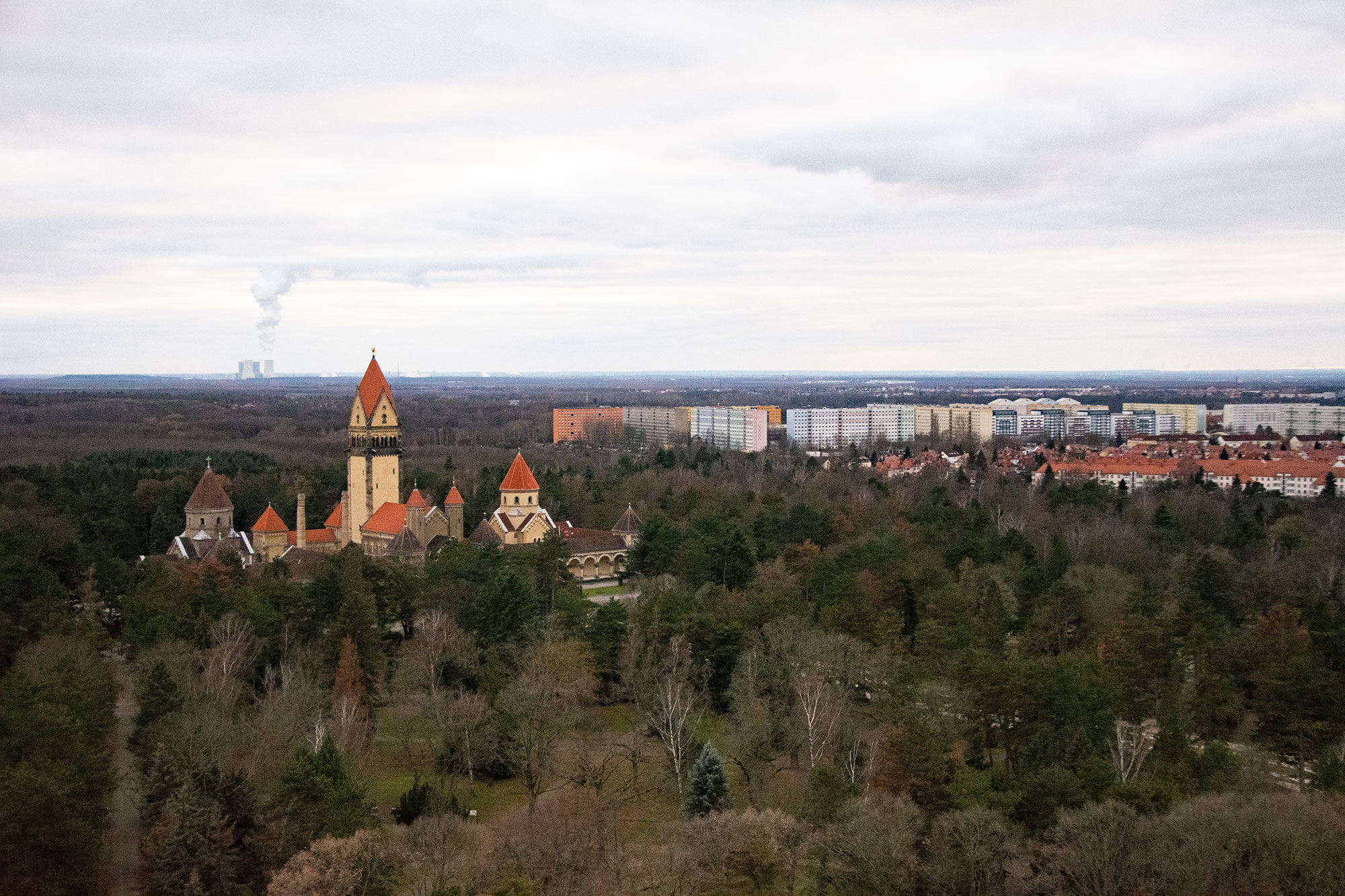 As the largest city in the German state of Saxony, Leipzig has a rich history and culture dating back to medieval times. And while I had heard that the city of Leipzig had great attractions and beautiful places, I had no idea how amazing Leipzig would be until I visited on a family vacation. In Leipzig, we found a mix of beautiful parks, World War II history, graffiti art, and the charm of a traditional European city. With all the things for families to do in Leipzig, you’ll want to make this lovely city your next international destination.

Contents hide
1 Leipzig’s Train Station
2 Zoo Leipzig
3 Monument to the Battle of the Nations
4 The Stasi Museum
5 The City Center
6 Clara-Zetkin Park
7 Leipzig’s Museums
8 The Holocaust Memorial
9 Day Trips from Leipzig
10 When You Go
10.1 Getting There
10.2 Where to Stay
10.3 Where to Eat 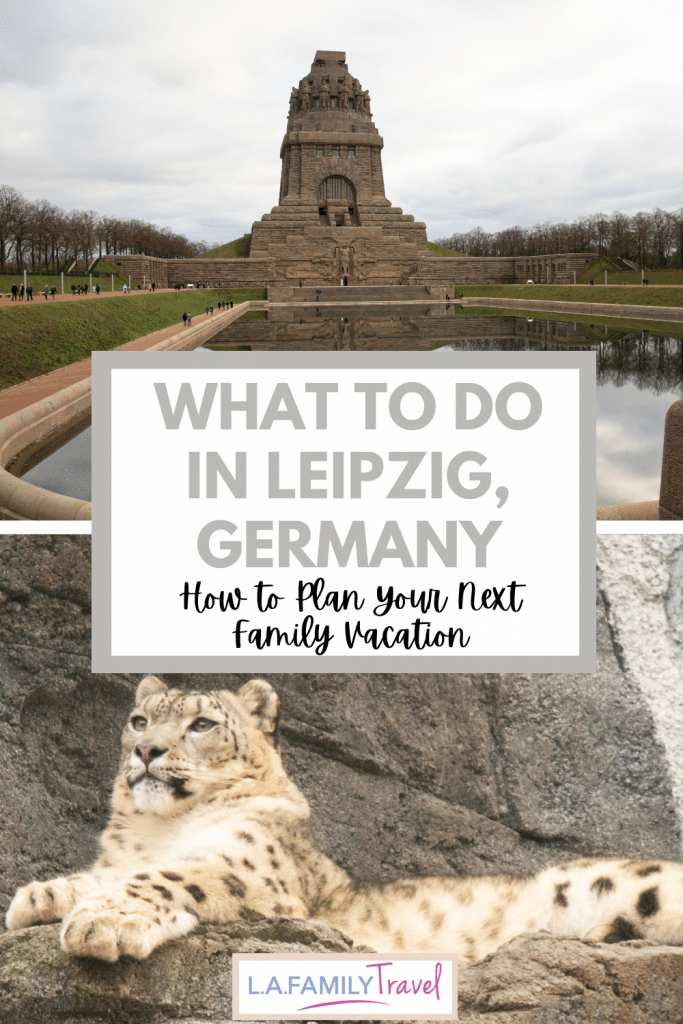 One of the best places to start your visit to Leipzig is the Leipzig Hauptbahnhof, or train station. In fact, there’s a good chance you’ll be arriving at the station when you first travel to the city. As one of the largest train stations in Europe, the Leipzig Central Railway Station has a two-story bookshop, a charming coffee shop, and tons of stores and restaurants (you can even get your Starbucks and McDonald’s fix there if you need to). The historic central station opened in 1915 and is known for its beautiful architecture. During your visit, seek out the vintage train cars and the memorial for Holocaust victims who were transported from the station.

Zoo Leipzig is a great place to take kids, and it is so huge that we found we really couldn’t see the entire zoo in one day (this is especially true if you are traveling with little ones). Don’t miss Gondwanaland, an indoor rainforest complete with winding paths, treetop trails, and boat rides. The zoo is also home to a black-maned lion (yes, like Scar from The Lion King), komodo dragons, and orangutans. There are multiple playgrounds throughout the Zoo Leipzig, and each has snack stands or restaurants nearby so parents can order food while children play. 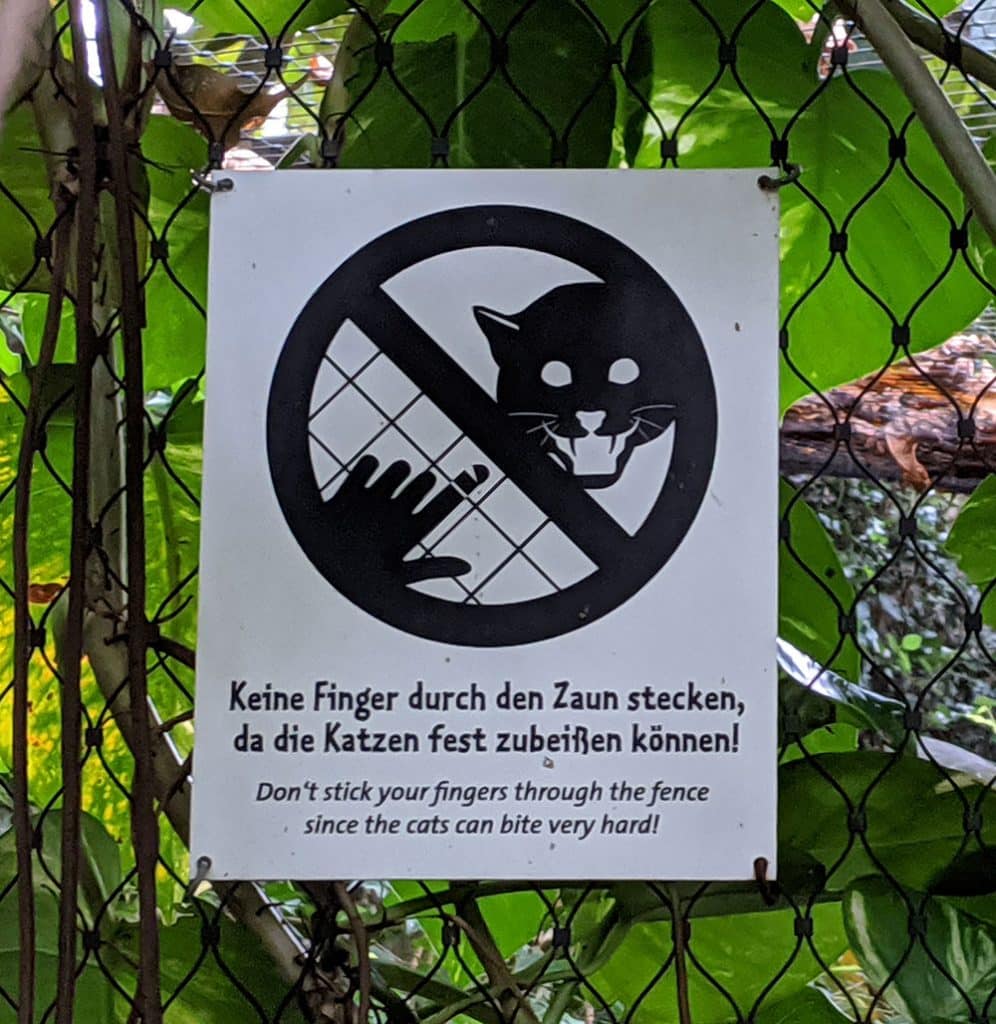 Our family cracked up when we saw this sign in Zoo Leipzig’s rainforest building. (But you know we made sure to keep our fingers away from that fence!) Photo by Christy Nicholson.

Monument to the Battle of the Nations

I could not believe that I had never heard of the Monument to the Battle of the Nations (sometimes called the Völki, a short version of its German name: Völkerschlachtdenkmal). Built in 1913 to commemorate the 100th anniversary of the defeat of Napoleon and the French army at the Battle of Leipzig, the monument is an imposing structure that will make a memorable impression for anyone. A reflecting pool and two paths lead to the granite exterior of the monument, which has statues and carvings representing aspects of war. The solemn, shadowed interior of the building is ornamented with sculptures, stained glass, and a domed ceiling. If you are willing to take the tiny elevator and narrow stairs up to the top of the 299-foot monument, you will be rewarded with a spectacular view of the area. The viewing platform is definitely an experience to save for older kids and teens — the steep climbs and narrow pathways were a bit harrowing even for the adults. 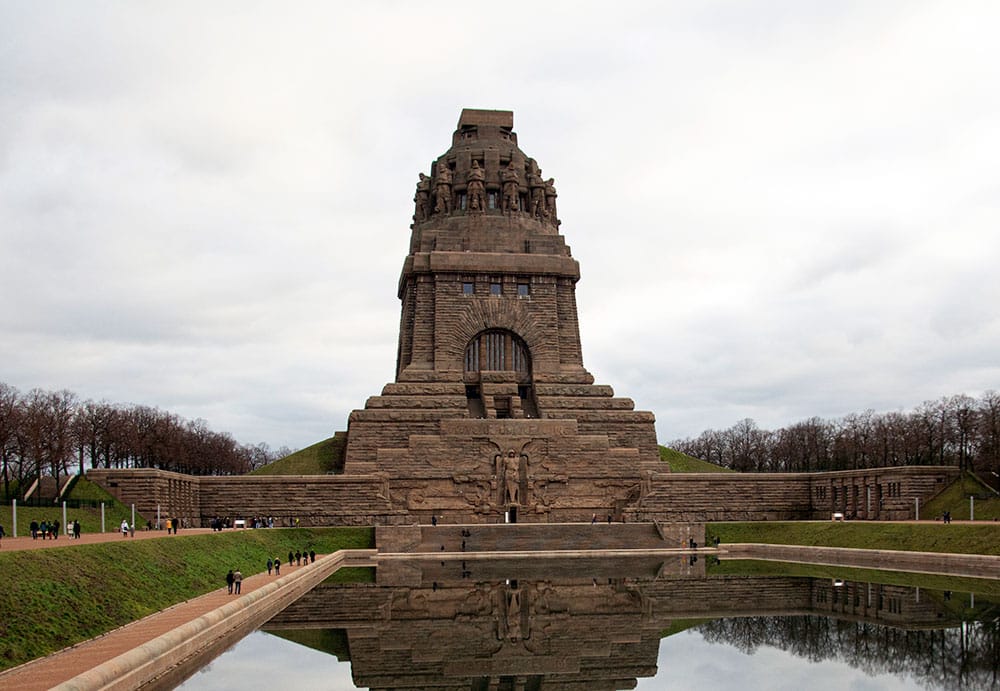 The Monument to the Battle of the Nations is a stunning work of construction and art. Photo by Paul Nicholson.

Leipzig was once part of East Germany, which gives it a unique character that is fascinating. During the peaceful protests (called Monday demonstrations) that started at St. Nicholas Church and eventually led to the fall of the Berlin Wall, demonstrators in Leipzig took over the headquarters of the Stasi, the East German secret police. The building has been preserved as The Stasi Museum ever since (in fact, residents who lived in Leipzig during the Soviet era can even look up their own Stasi files). This is another stop that would be best for older kids and teens — an audio tour documents the oppression and difficulties of the Soviet Era as visitors walk through the building. But there are light-hearted aspects of the museum as well, like the collection of disguises worn by secret agents! And before you leave the area, be sure to visit the chunk of the Berlin wall that is displayed outside.

Pro-tip: Don’t expect everyone in Leipzig to know English. Many older residents learned Russian as their second language. 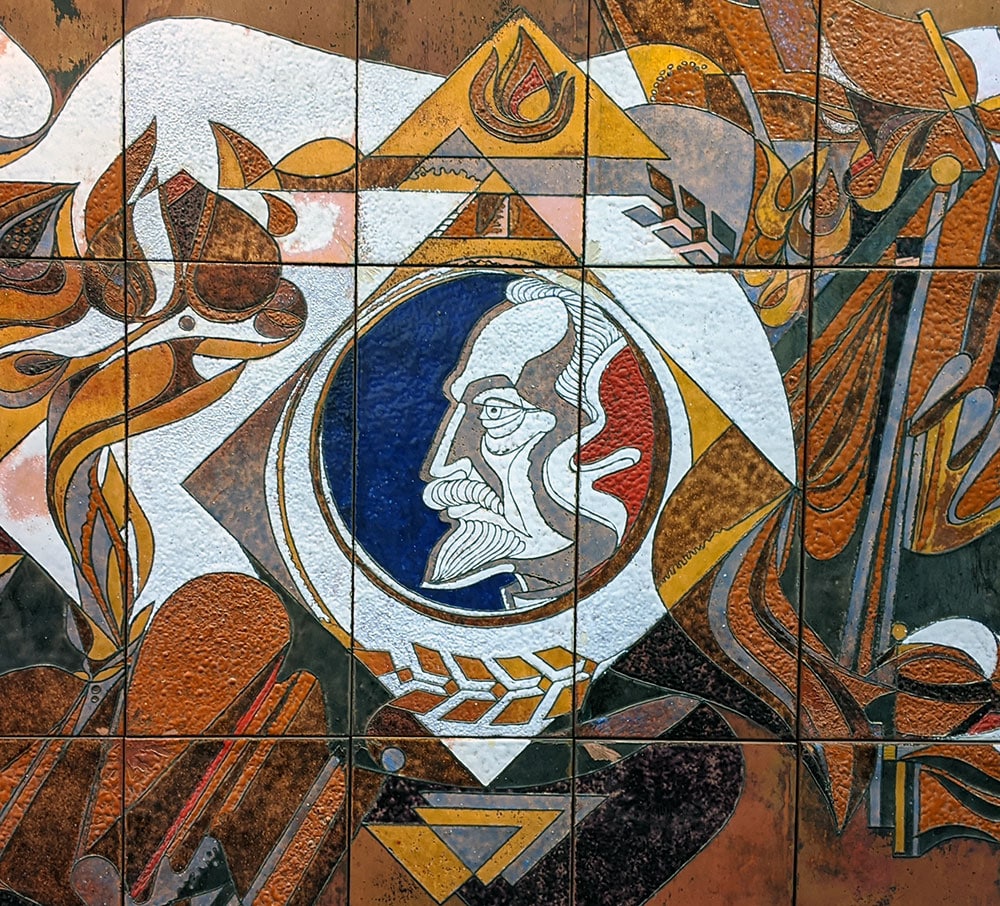 The art covering the walls at the Stasi Museum is a stark reminder that the city was once under the control of the Soviet Union. Photo by Christy Nicholson.

Much of the center of Leipzig is pedestrian- and bike-only, which makes it a fantastic place for families to walk and see Leipzig’s attractions. Check out St. Thomas Church (Thomaskirche), a 500-year-old building where Johann Sebastian Bach wrote and performed many of his compositions (file this in the “your kids may not understand now but will thank you later” category). My kids also loved ducking into a local bookstore in the area and seeing all their favorite books translated into German.

Be sure to visit the weekly markets in the central square (Marktplatz) to experience local butchers selling fresh sandwiches and bakers making bread in a wood-burning stove. It’s a great lunch stop where you can usually find interesting street food as well as local honey. 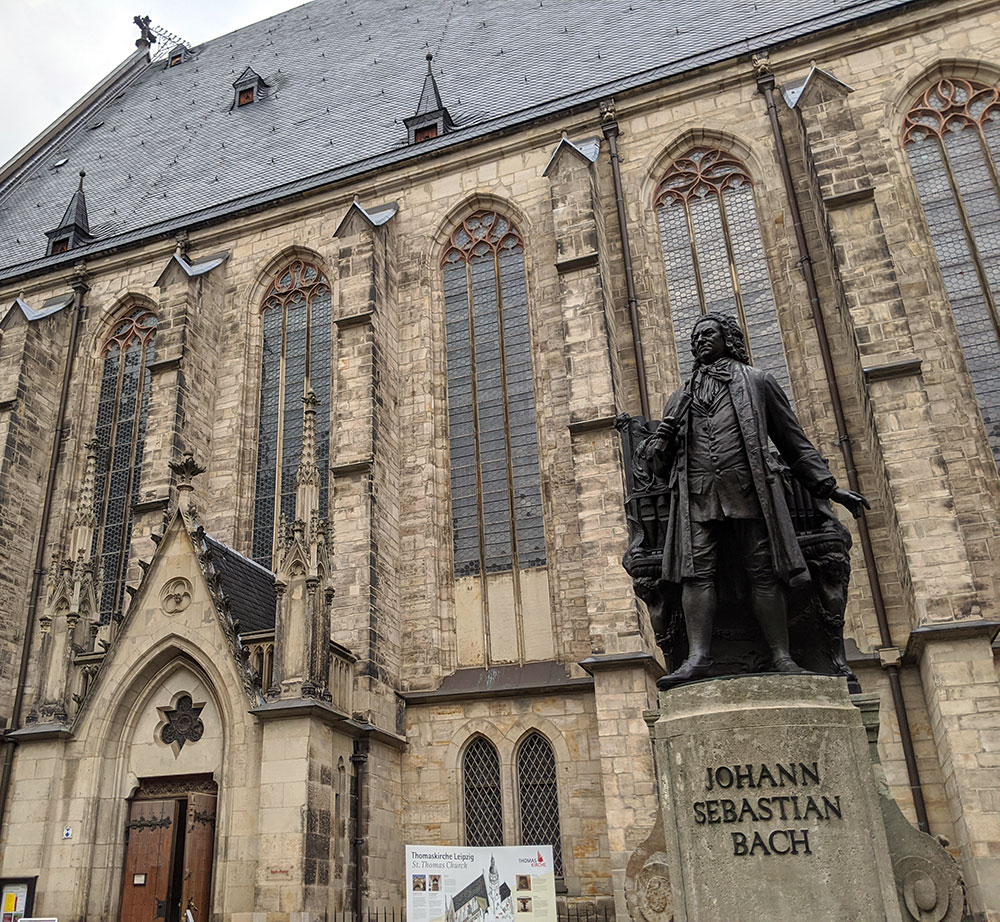 St. Thomas Church is a beautiful, Gothic church with a stunning interior. The Bach Museum is just a short walk away. Photo by Paul Nicholson.

Every trip needs a day when kids can relax and play, and Clara-Zetkin Park is just the place for families to unwind. The park has several different playgrounds with a variety of features, including sandy play areas, slides, climbing structures, a carousel, water tables, and see-saws. One of the best things about the park is that some of the playgrounds even have snack stands nearby.

Leipzig is a city full of amazing museums, but determining which ones are particularly family-friendly can be tough. The Museum of Fine Arts is a good introduction to museum culture for families with young children. Beautiful art is paired with open spaces, and the scale is manageable for kids who get antsy during a long day. My sister-in-law visited with four preschoolers, and the staff didn’t flinch when the kids all laid down on the floor to get a better view of the art.

The city museum in Leipzig’s Old Town Hall offers some interesting glimpses of Leipzig’s history from medieval times to today, including remnants of prison cells in the basement of the old city hall.

In Leipzig, we found beautiful parks, history, graffiti art, and the charm of a traditional European city. With all the things for families to do, you’ll want to make this lovely city your next international destination.

While you are in Leipzig, take a quiet moment to visit the city’s moving Holocaust memorial. The 140 empty chairs represent the 14,000 Jewish citizens of Leipzig who lost their lives in the Holocaust. As you walk throughout the city streets, also watch for the “stumbling stones”– tiny plaques embedded into the sidewalks in front of the former residences of Jewish people victimized by the Nazis. Each plaque tells a tiny piece of a person’s story. 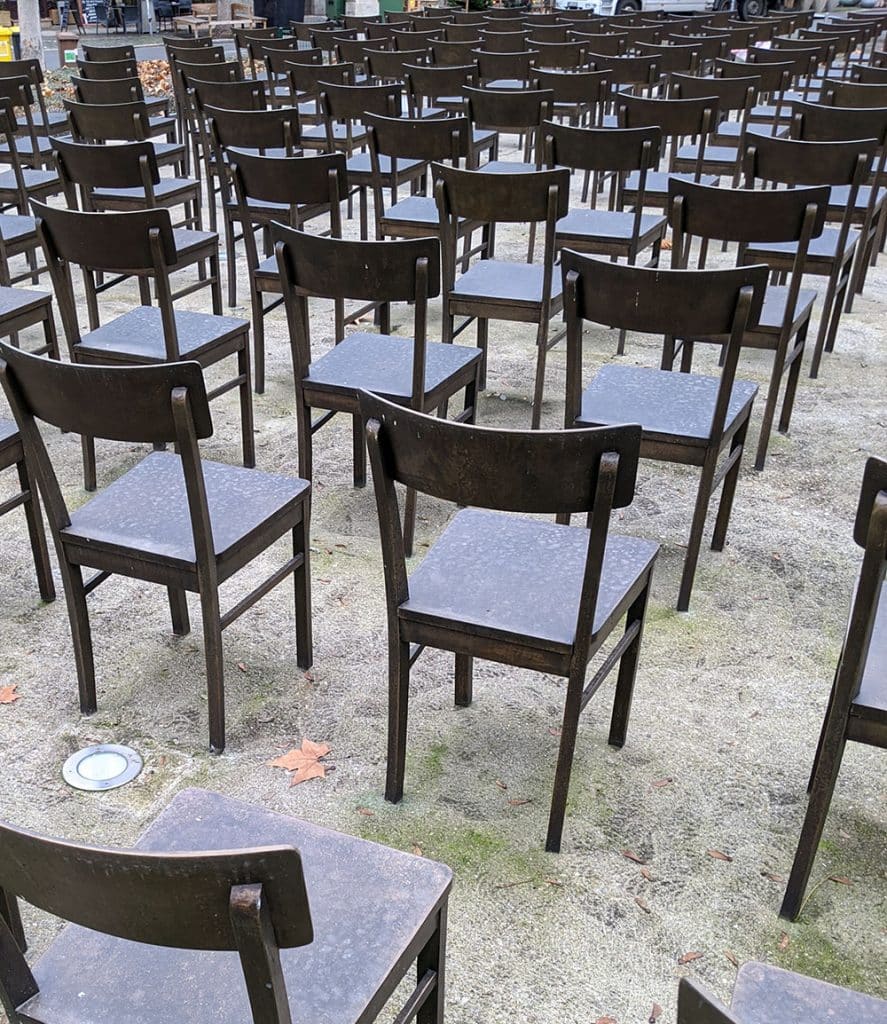 Leipzig’s Holocaust memorial is a contemplative, open-air place to remember the victims of the Nazi regime. Photo by Christy Nicholson.

Berlin is a 90-minute train ride from Leipzig, so it’s an easy trip to see Germany’s capital city (and the Natural History Museum there is amazing!). Religion and history fans might enjoy Wittenberg, where Martin Luther famously kicked off the Protestant Reformation. It’s just 30-40 minutes from Leipzig via train. If you have castle fans in your family, be sure to check this guide to Saxony’s castles and pick a nearby Schloss to visit.

Don’t Miss! How to Save Your Family Vacation When Everything Goes Wrong

While Leipzig does have an airport (it actually was the airport filming location in Captain America: Civil War), you’ll generally find it easier and cheaper to get a flight into another major city like Berlin or Frankfurt and take a connecting flight or train to Leipzig. You can check out the discount rates from CheapOAir below.

Taking the train is a wonderful experience and one I recommend while you are in Europe. Zipping through the German countryside and passing wind turbines and small, picturesque villages was one of the best parts of the trip for our family. The trains are comfortable and fast, and the gorgeous train stations are filled with stores and restaurants to provide any supplies you might need.

Pro-Tip: The streetcar/tram stop in front of Leipzig’s main train station is crowded and hectic. Instead, consider taking an S-Bahn train straight into the market square.

Once you are in Leipzig, much of the city is accessible via their easy-to-use streetcar system. A bus tour might be the best way to familiarize yourself with the city and hit the highlights, but reserve a tour in advance because English-language tours are limited. Consider stopping by the Tourist Information Center for maps, bus and walking tour information, and coloring sheets for kids as a good introduction to the city.

If luxury is your style, try Hotel Fuerstenhof. The hotel and its restaurants are currently closed for construction, but normally they are the lodging choice for celebrities and heads of state.

Steigenberger Grand Hotel is the other top hotel in Leipzig, and the location – right in the middle of the city – is one of the best.

If you are on a tighter budget, consider staying at H+ Leipzig. The location is not as convenient to the city center, but they serve an excellent German breakfast.

Peter Pane is an upscale burger bar located near the art museum. The whimsical Peter Pan theme makes this restaurant fun for kids and adults alike.

If you have a sweet tooth, then Milchbar Penguin is a good place to stop. While the restaurant does serve regular food, it’s famous for its ice cream creations (try the ice cream spaghetti for a unique experience!).

For a quick bite to eat, try Thüringer Rostbratwurstgrill, a bratwurst stand with tasty, delicious food to fuel you up for the day. 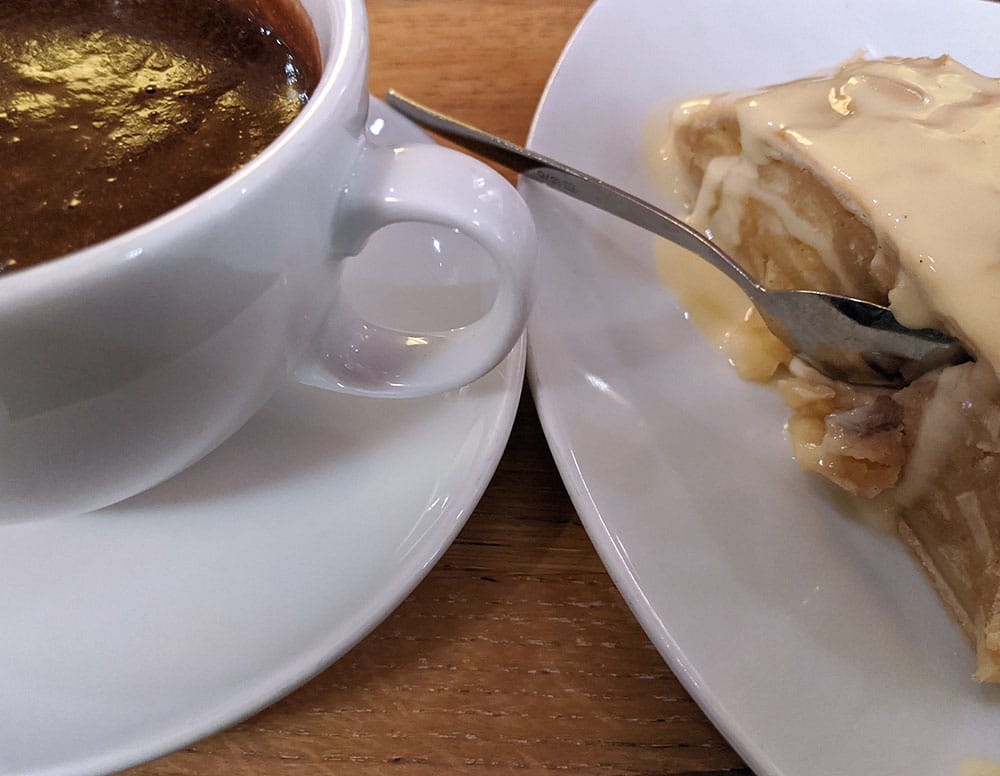 At Milchbar Penguin, my kids ordered ice cream sundaes as big as their heads. However, I couldn’t resist the apple strudel and hot cocoa. Photo by Christy Nicholson. 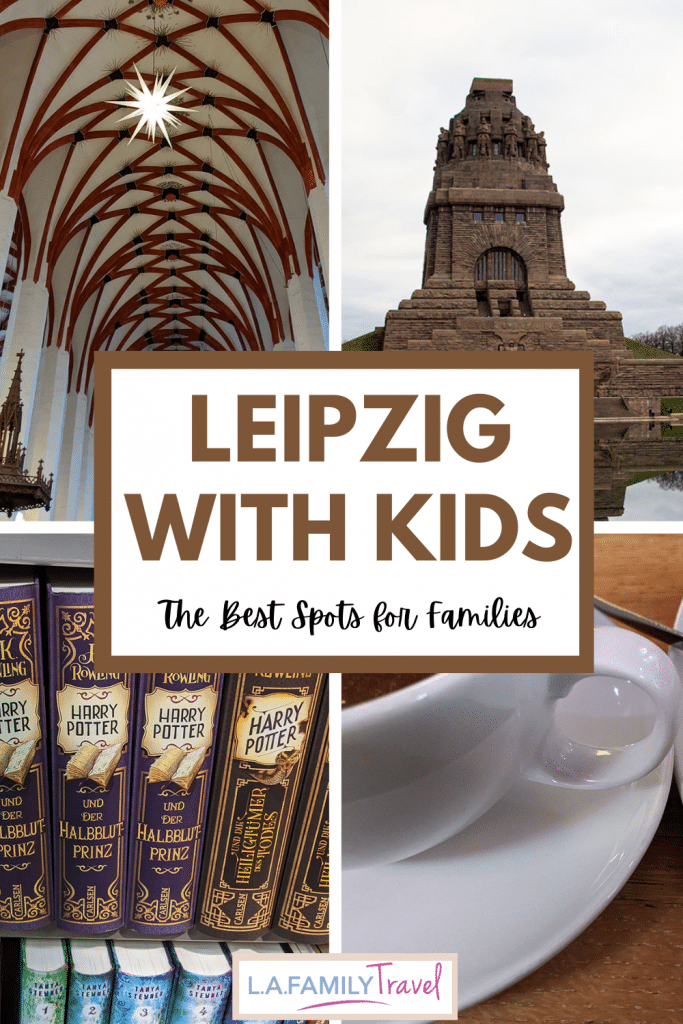