7 Fun Activities for Summer in Mammoth with Kids 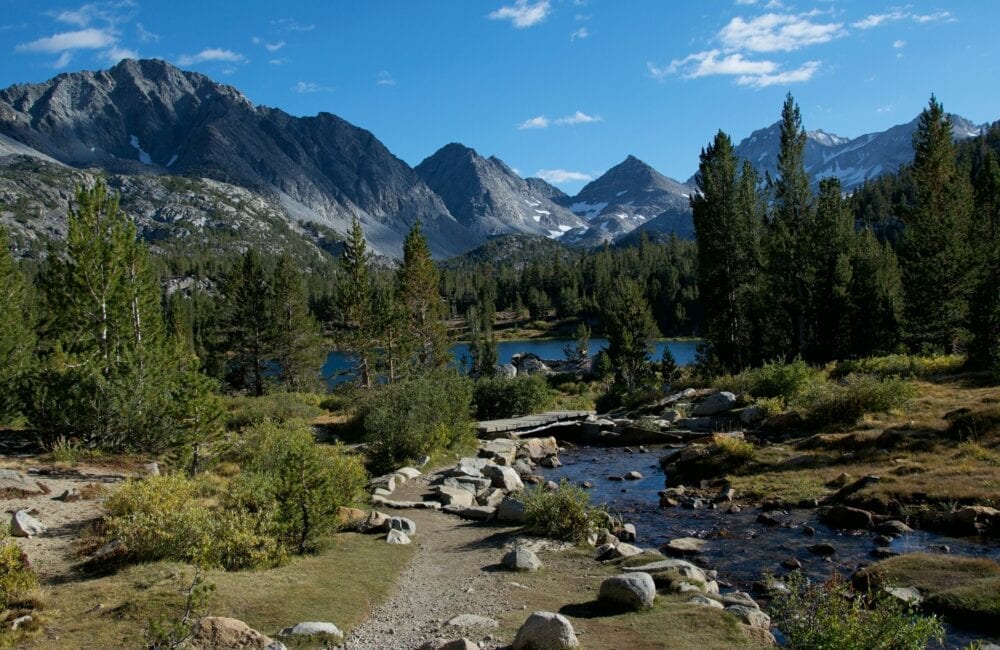 Although I wanted him to be brave, part of me pictured his hands losing grip on the rope suspended to the branch above his head and his little body landing with a dull thud onto the sharp rocks. We took our kids to Mammoth Lake in the summer because we knew there were tons of fun things to do there with kids that were different from activities in the winter. But this was a bit much.

Contents hide
1 GO JUMP IN A LAKE
2 GO FISH
3 GET A MAMMOTH MOUNTAIN ADVENTURE PASS
4 TAKE A HIKE
5 VISIT MAMMOTH VILLAGE
6 UNPLUG
7 RIDE THE FREE TROLLY
8 When You Go
8.1 Getting To Mammoth Lakes from LA
8.2 Where to Stay in Mammoth

NO TIME TO READ NOW? PIN THIS ARTICLE OR BOOKMARK IT FOR LATER! 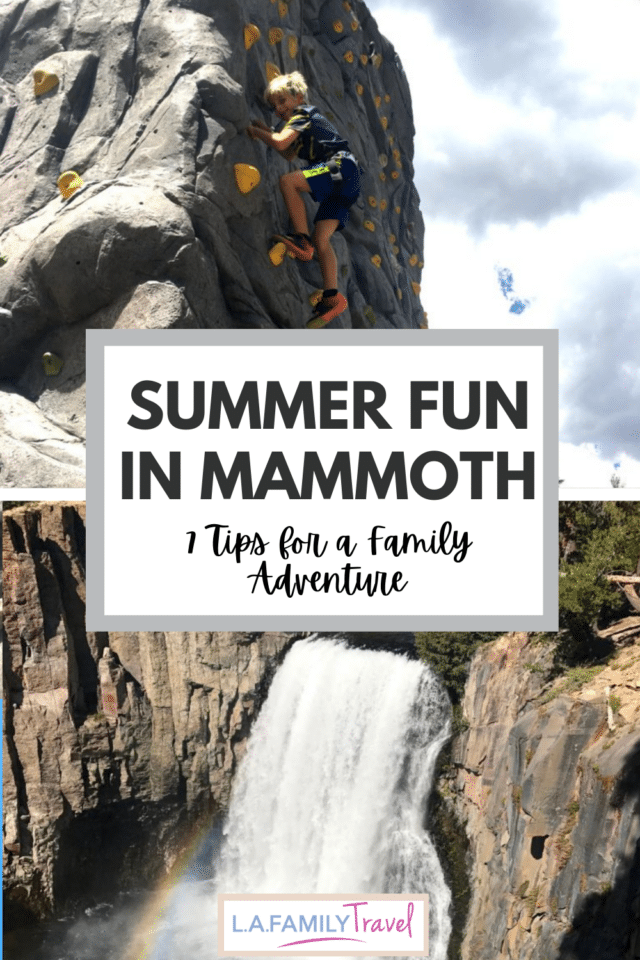 Besides our screams of terrified excitement,  Gull Lake, one of the June Lakes by Mammoth, was relatively quiet. Only a few boats bobbed on the calm, green water bordered by a wall of bamboo growing from the bottom of the lake.  Pine trees and snow-capped mountains framed our postcard view.

My son, Kaleb, held his hands high, testing his grip on the well-worn fibers. “Come on Kaleb, you can do it!” his dad and I encouraged him. It didn’t help that his best friend, Blake, would have nothing to do with any of this and was doing everything in his power to discourage everyone from what he considered a foolish activity.  “Please Kaleb! Don’t!” he literally cried, “you’re my best friend! I don’t want you to die!” The possibility of an actual death was probably a stretch from the five-foot fall that would occur if, indeed, Kaleb did lose his grip on the rope, which, if he held on, would send him over the dirt, on which he currently stood, over the aforementioned sharp rocks and into the wake-up call of the frosty lake water.

Mammoth Lakes, during the summertime, is full of opportunities to laugh into the face of death. Our family had only explored the mountains on skis and snowboards, so when my friend, Lisa Miller, mother to cautious Blake and his two brothers Camden and Rylan, asked if we wanted to spend a long weekend up there, how could we say no?

Kaleb took some deep breathes. Paused for a second. Blake’s woeful lamentations could be heard in the silence between our breaths. He walked away to sit, moaning by a bush, not wanting to watch. Everyone else was still, waiting.  His dad floated in the lake nearby to reassure him that he was there and to also give him a target for which to aim. I was taking the video. Another breath and he charged with quiet determination at the jade water.

This would be a different story if he had missed. Instead, he learned he could have fear, face it and get on with it.

This brings me to my first tip about visiting Mammoth Lakes during the summer.

Although I wanted him to be brave, I pictured his hands losing grip on the rope and his little body landing with a dull thud onto the rocks. Learn 6 more ways to have fun with crazy kids.

GO JUMP IN A LAKE

Specifically, go find the tire swing – which on the day we went was inaccessibly hanging on a branch, way out of reach. However, there was also a rope swing tethered an arm’s length away. These you can find on Gull Lake, one of the four lakes along the June Lake Loop, which is about a 20 minute, well worth it,  drive from Mammoth Lakes. The path to the swing and rope is along the Fisherman’s Trail at the Gull Lake Campground. Drive along Highway 158 from downtown June Lake until you see the campground. 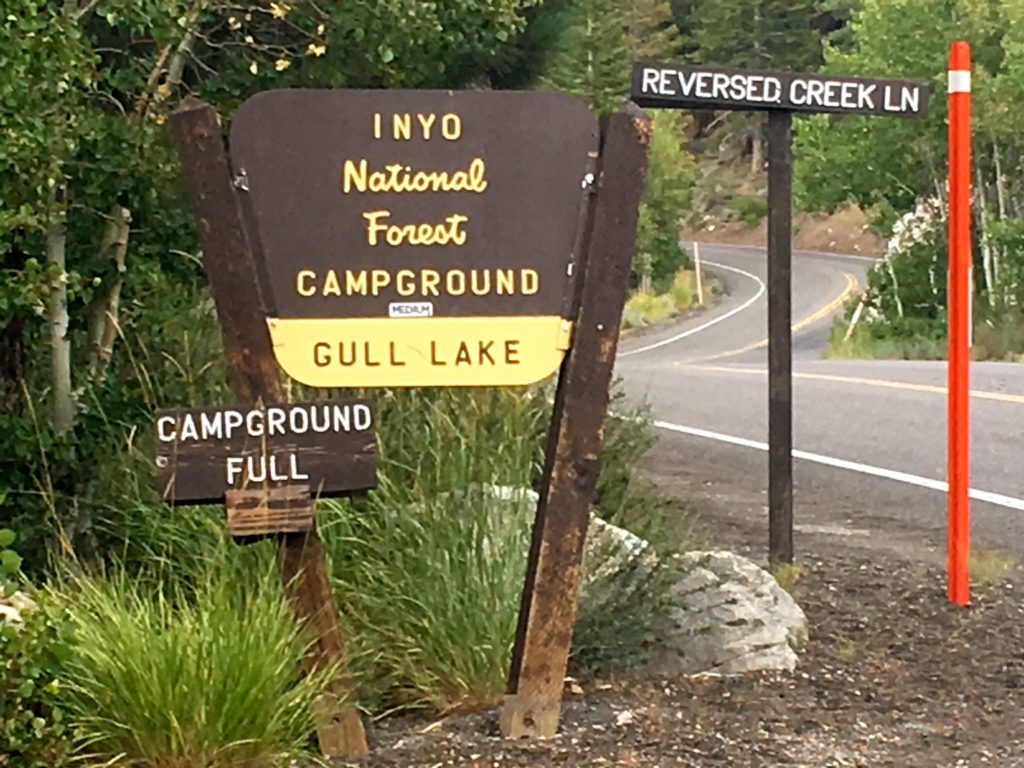 Park your car and head toward the path poking out just left of the road sign if you’re facing the campground.

The signs that you’re heading in the right direction are pretty hard to miss. 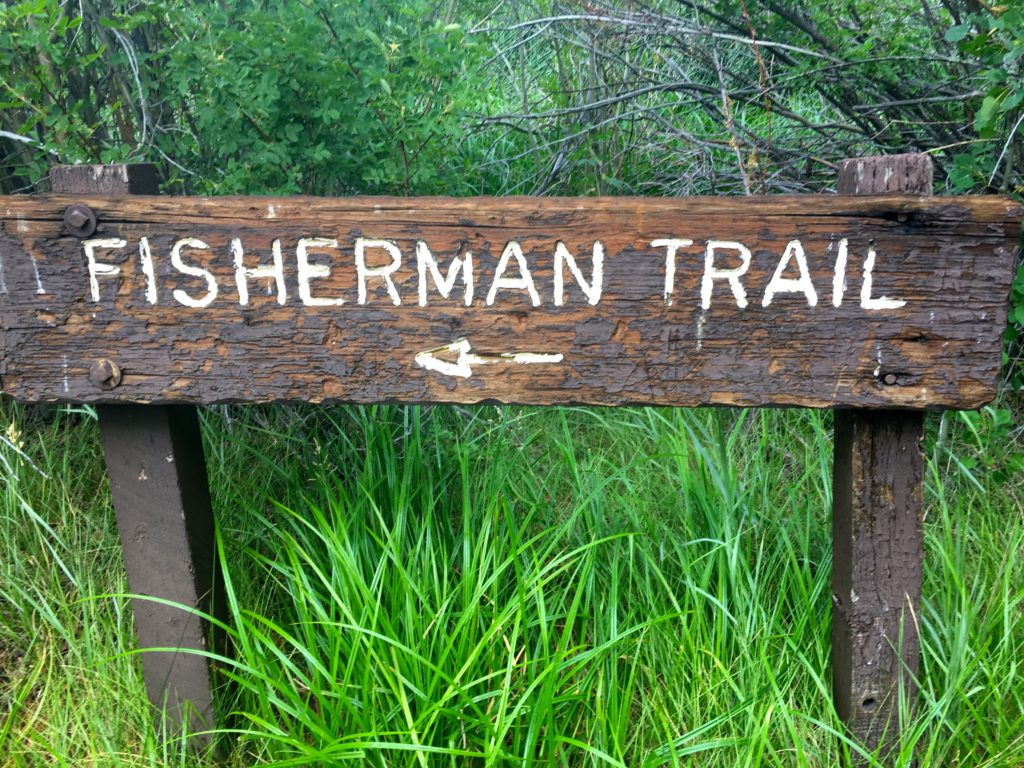 Everyone that jumped had fun and the ones that didn’t were happy the others had survived, so it was a good day.

Tip: Bring organic insect repellant because you’re being healthy and don’t want to put unnecessary toxins on your body but you also don’t want to leave feeling like a vampire feeding trough. Also, you could stop by the city of June Lake on your way to or from the rope swing and get some lunch at June Lake Brewing. They have a Hawaiian food truck that serves food until 4pm or until they run out. The tables are long and communal. We met 15 year residents and self-described June Lake hillbillies,  Amanda and Peter there. They said they love June Lake for the yoga, rock climbing and hot springs. Peter said the population of June Lake is the same as the apartment building in which he lived in Seattle.

While we were tempting fate with rocks and water, I’m sure we were getting some evil looks from the fishermen whose luck we were probably changing with our crazy antics. Fishing season in Mono County, where both Mammoth and June Lake are located, starts the last Saturday of April and goes until mid-November. After we survived the rope swing and the mosquitoes, we decided to see if we could continue our winning streak in a pontoon boat loaded with reels and sharp hooks. 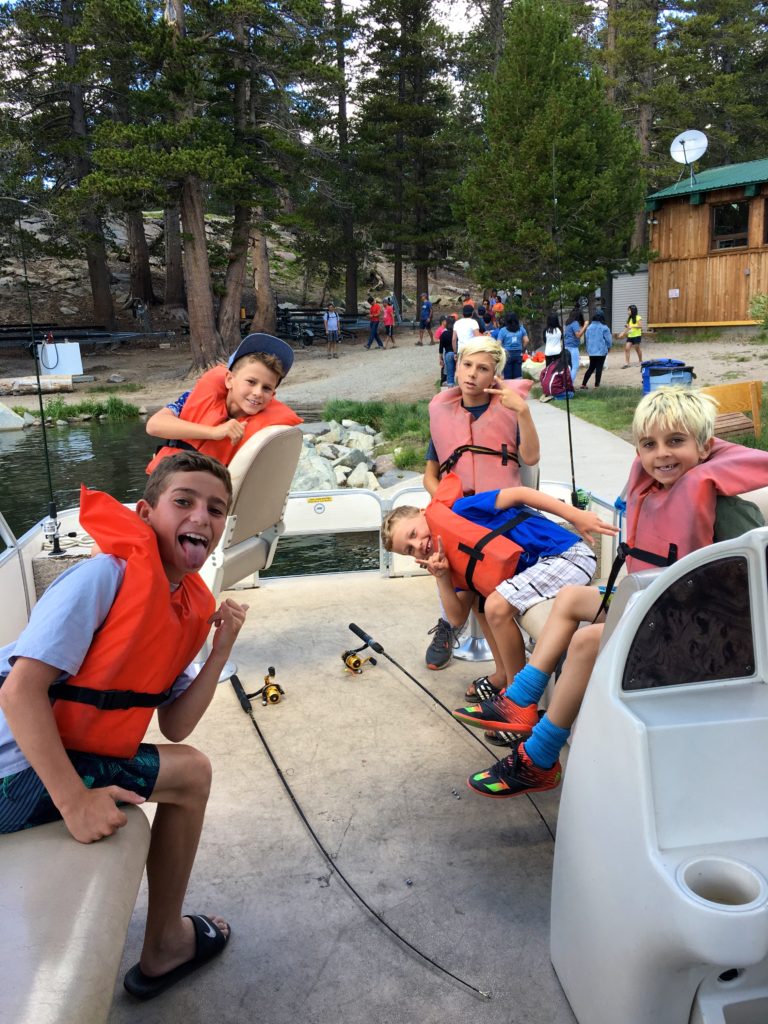 The sharper the better…

We may or may not have forgotten the bait which may or may not have contributed to breaking that streak. But fun was had by all as the Miller boys claimed to never have gone fishing before and mine had only done it on land with a guide doing most of the work.

We rented a boat big enough for us all at Lake Mary and tried our luck with lures alone.

Maybe some people have success with lures alone but those people were not us. However, casting the line and taking turns driving the boat at 2mph was fun enough for the boys so that was good enough for the adults. And then there was the dance party.

Plus they got the chance to jump in the lake again.

GET A MAMMOTH MOUNTAIN ADVENTURE PASS 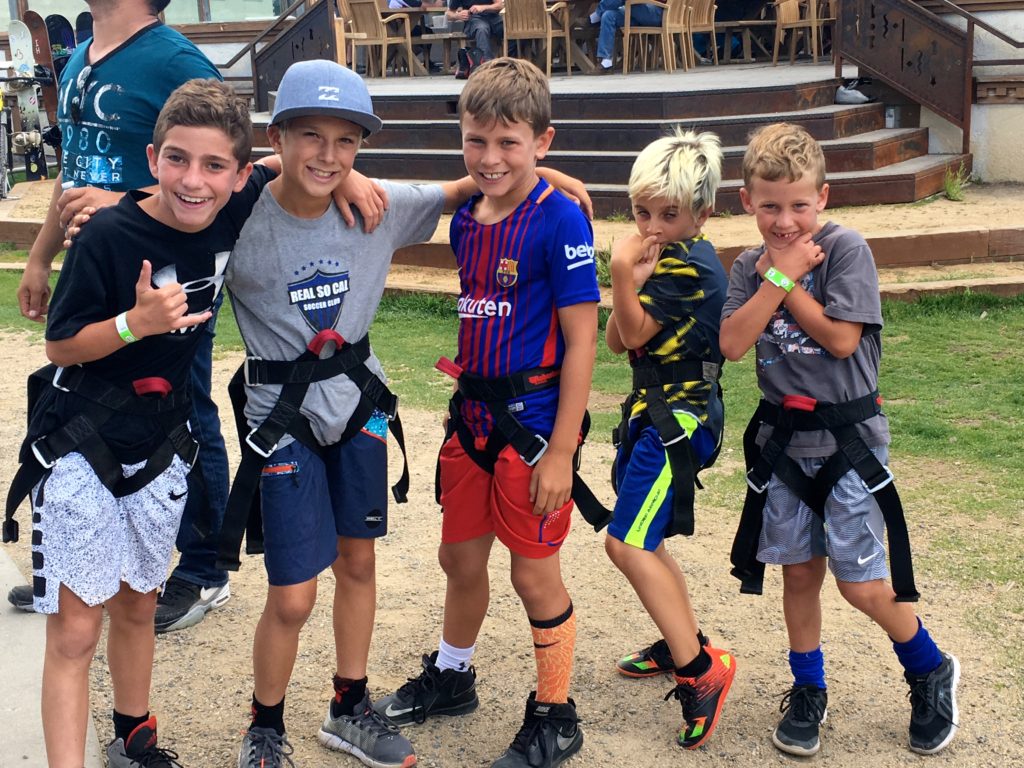 If you have five boys to entertain or even four or three or god-forbid two (!) then you need to run them until they drop. The perfect place to do that is at the Adventure Center right by the Mammoth Lodge where, during the summertime, they set up a rock wall, zip-lining and a bungee trampoline. The pass also gives you a discount on lift passes for the biking trails. A pass gives your jellybeans unlimited opportunities to hurl themselves at walls, bounce their little hearts out and throw themselves into whatever tizzy they want from 25 feet off the ground, all outside the range of your sensitive eardrums in the safety of a controlled environment.

One of the operators challenged Knox to climb the hardest wall and he was the only one in our group who did it. He conned the guy out of a pack of Starburst as a reward. 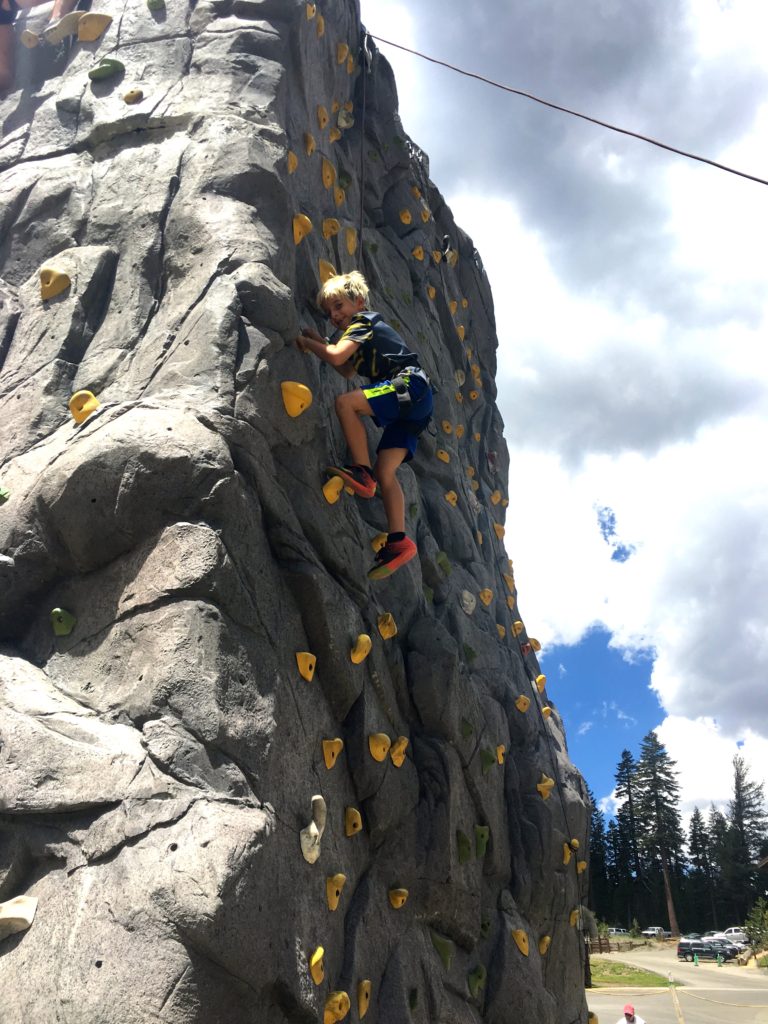 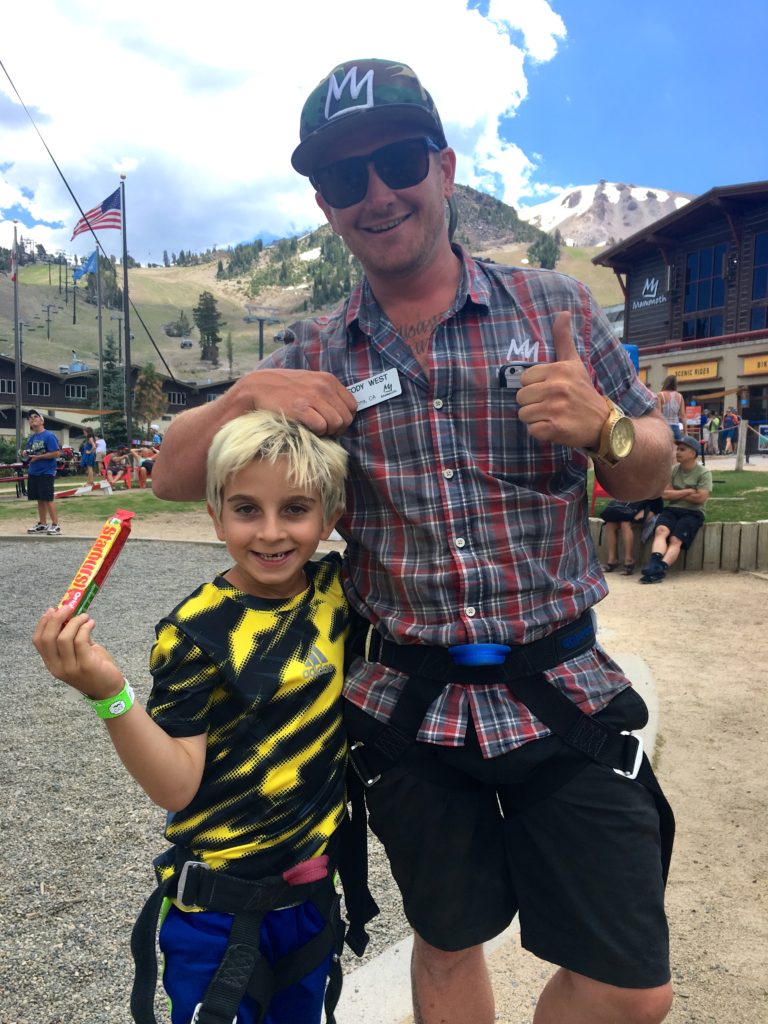 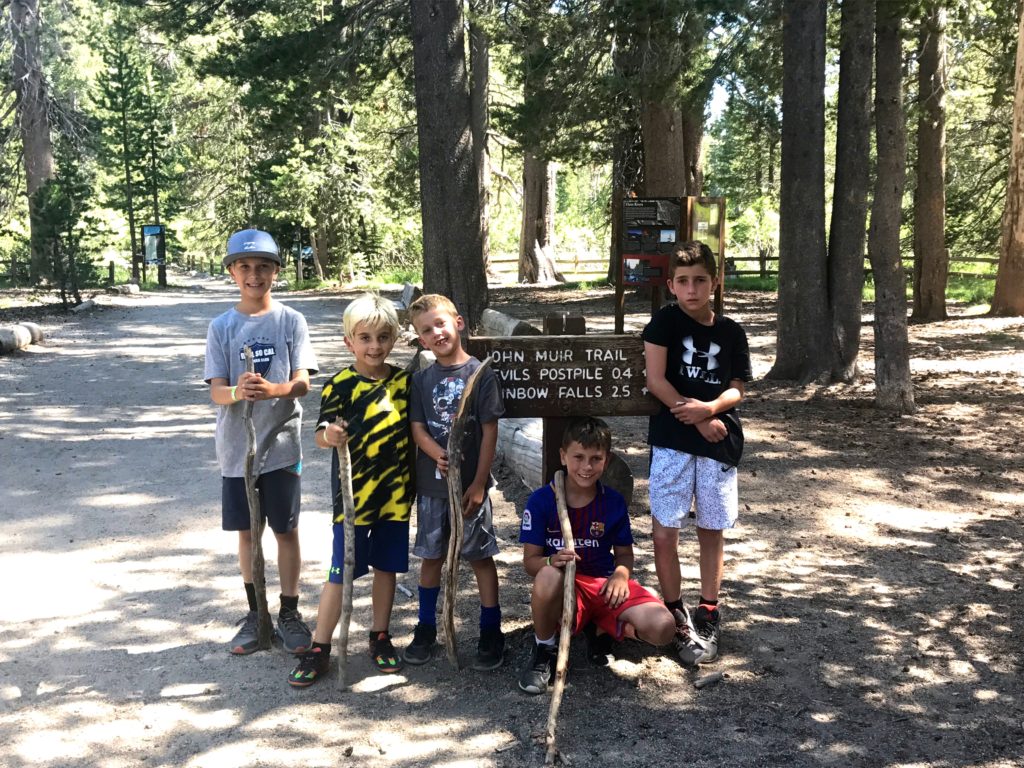 Lord of the Flies?

There are hiking trails leading from the gondolas leaving the Adventure Center where you can take strenuous to moderate hikes on Mammoth Mountain, lush with fiery wildflowers exploding from the earth after abundant snow melts. There are also areas to explore beyond the popular mountain accessible by dog-friendly shuttles that transport you to points that let you choose the length of your adventure, leaving from the convenience of the Adventure Center. Chances are, you’ll need more water than you think for those breathtaking walks. We did.

The shuttle takes you down a narrow and circuitous mountain road that makes you hope the driver is feeling at the top of his game. The road will drop you into God’s majestic Christmas tree lot with pine needle scents wafting from the expansive green, rolling hills. This heart-melting area that leads to Devil’s Postpile and Rainbow Falls was almost turned into a woodpile by the logging industry at the start of the last century. However, President Taft declared the land a National Monument in 1911, protecting it for generations of outdoor lovers.

The trail to Devil’s Postpile is a short one and will make anyone feel like a warrior, despite their actual fitness level.

Don’t Miss! What You Need To Do In Pismo Beach For Family Fun! 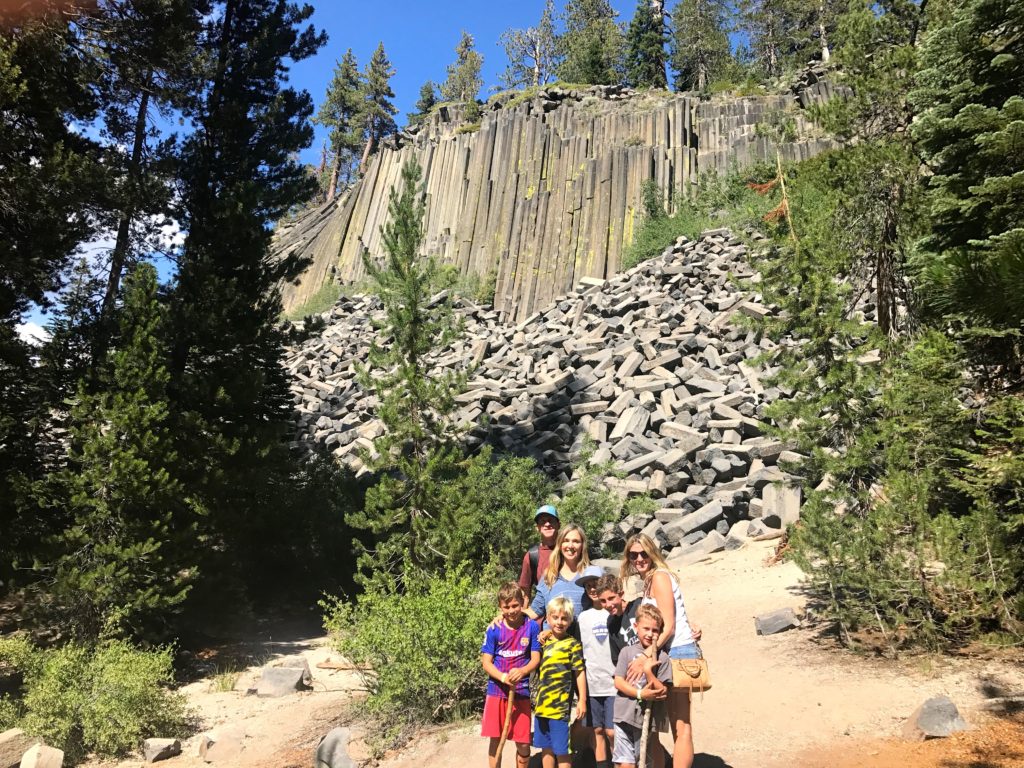 However, the fun of hiking on to Rainbow Falls through beautifully preserved trails and heart-bursting vistas may have been marred by a staccato of whines and not the good kind. But we finally made it. 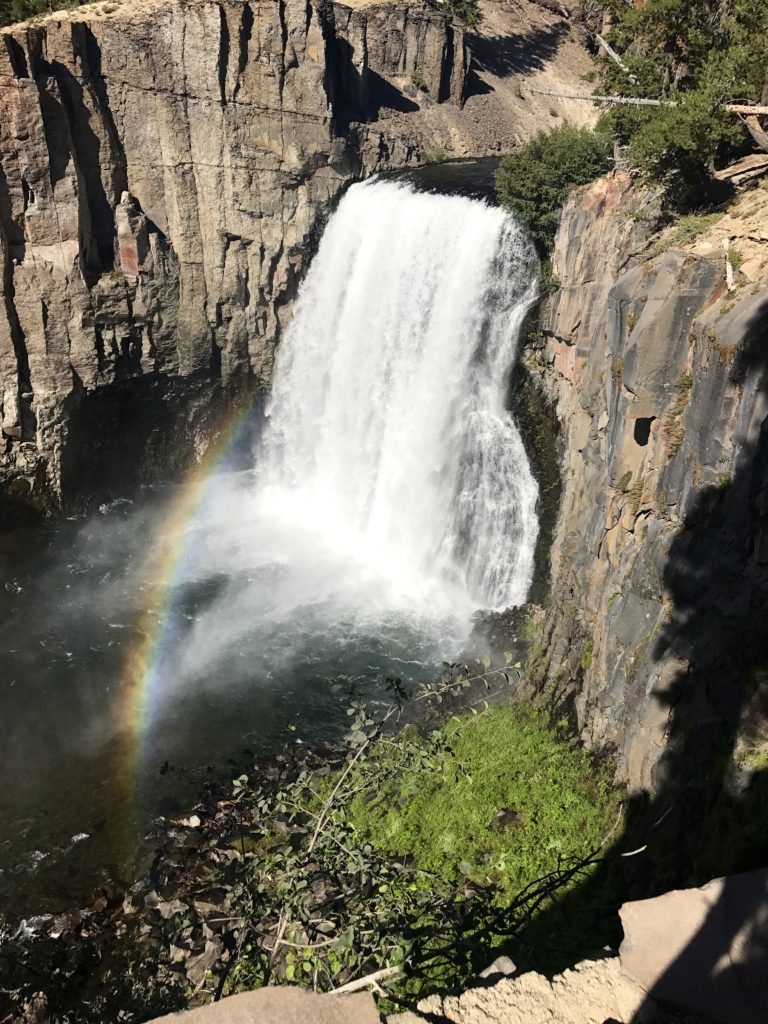 The reason they called it Rainbow Falls

Part of our journey took us through Ansel Adams Wilderness and we were alarmed by the apparent destruction of the glorious land he immortalized through his pictures. 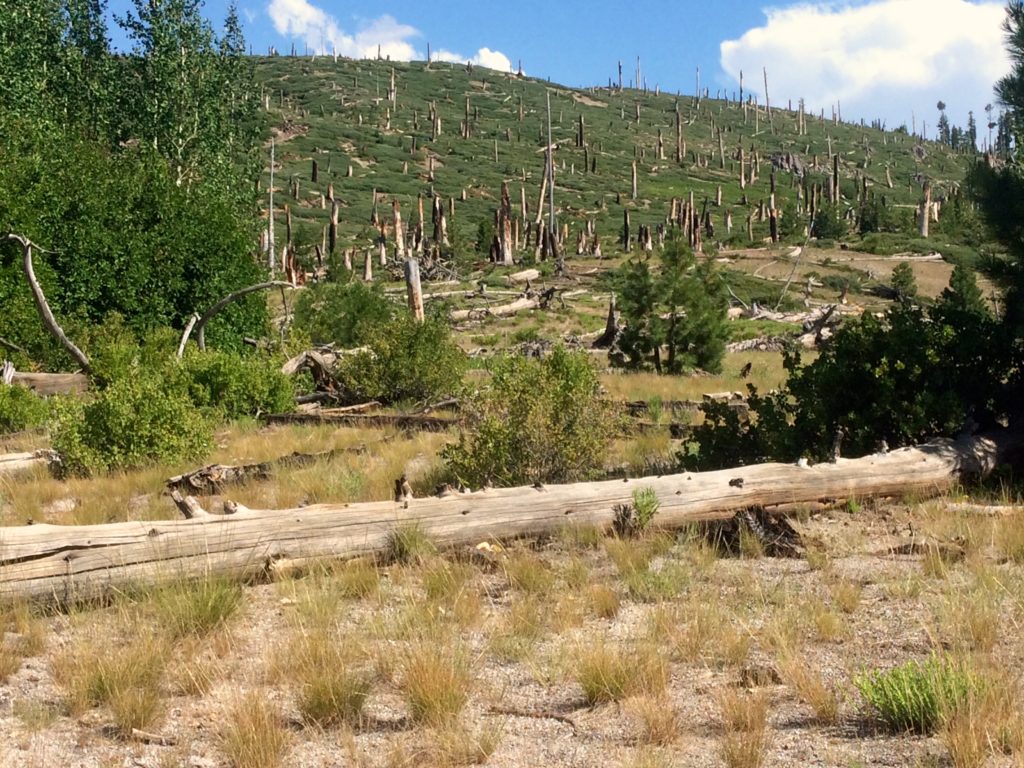 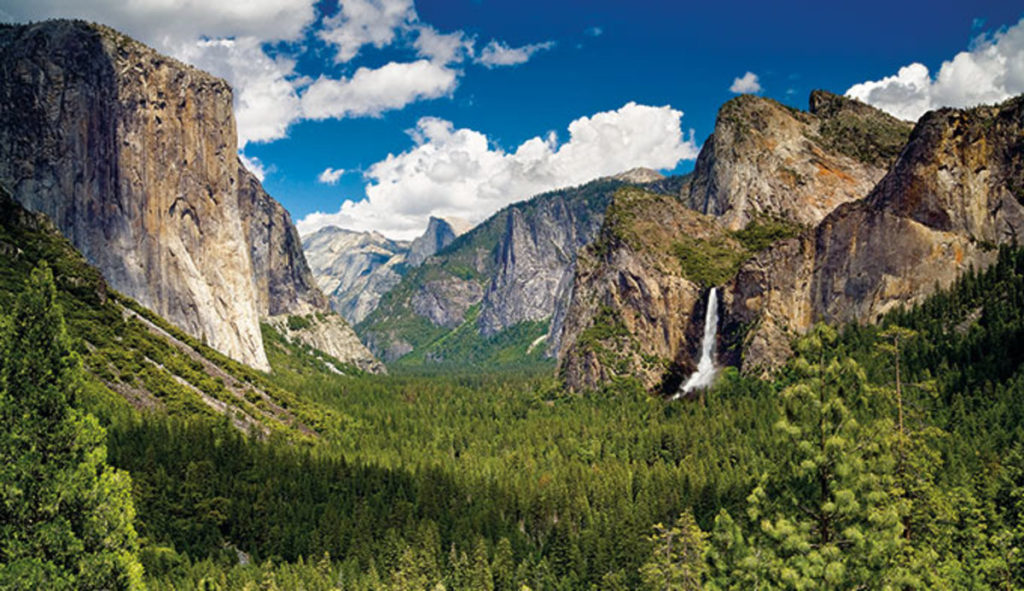 This photo by Ansel Adams…he had a better lens

Friends of the Inyos, Communication and Outreach manager, Alex Ertaud said the devastation was caused by two events. The first was the Rainbow Fire in 1992 which burned 6,000 acres and almost took out the Mammoth area as well. Then, in 2011 winds traveling at speeds of 190 miles per hour ripped through the valley and plucked the remaining trees from the earth.

But by the end of our long and dry hike, our city boys had their shirts wrapped around their heads and were charging through streams and climbing over rock obstacles. We all just wished we had brought more water. 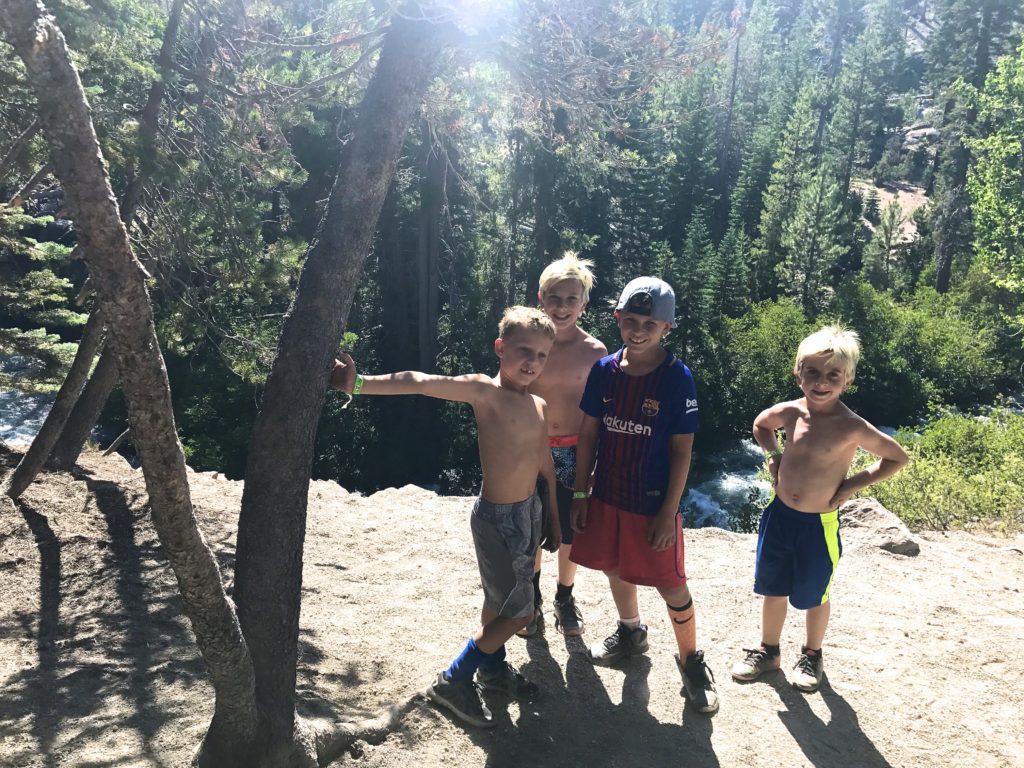 Top of the World

The Village, the central gathering spot in Mammoth, hosts events to bring visitors together, socialize and wine and dine them throughout the year. While we were there, the event they held was called World’s Highest Rib Cook-Off and it involved live music and hula hoops. 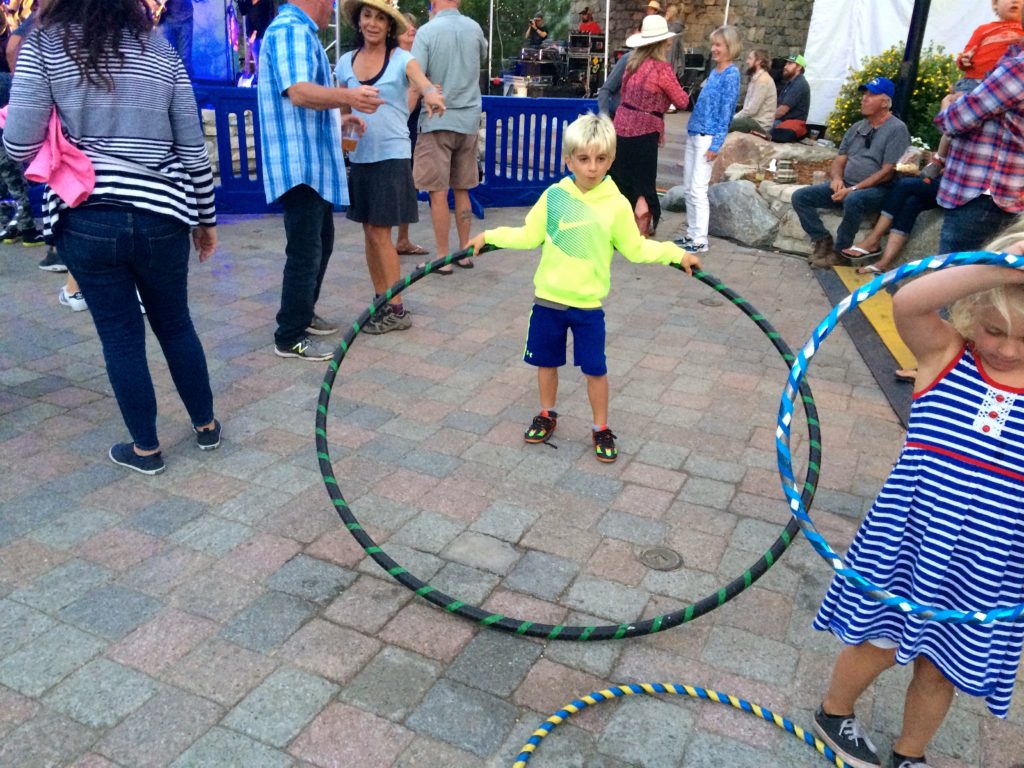 Screens are addicting. Sure, they can be useful at the right time and place but a majestic cornucopia of mountains and trees is not the time or place.  It’s pretty great to see imaginations soar when electronics aren’t on the agenda. 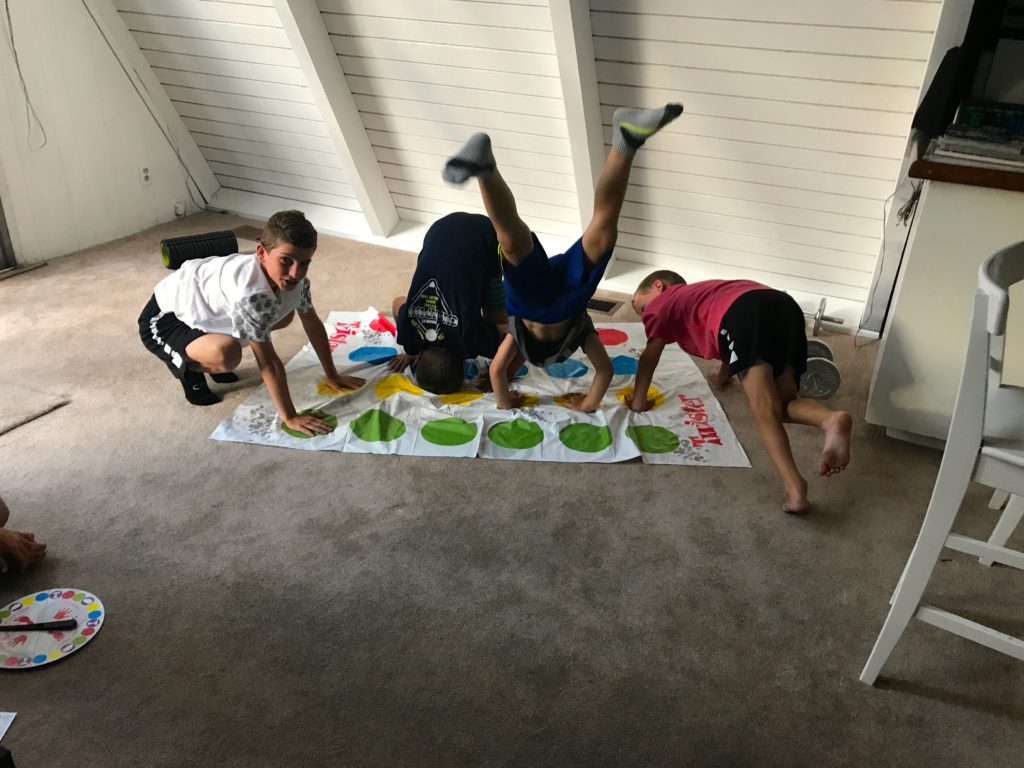 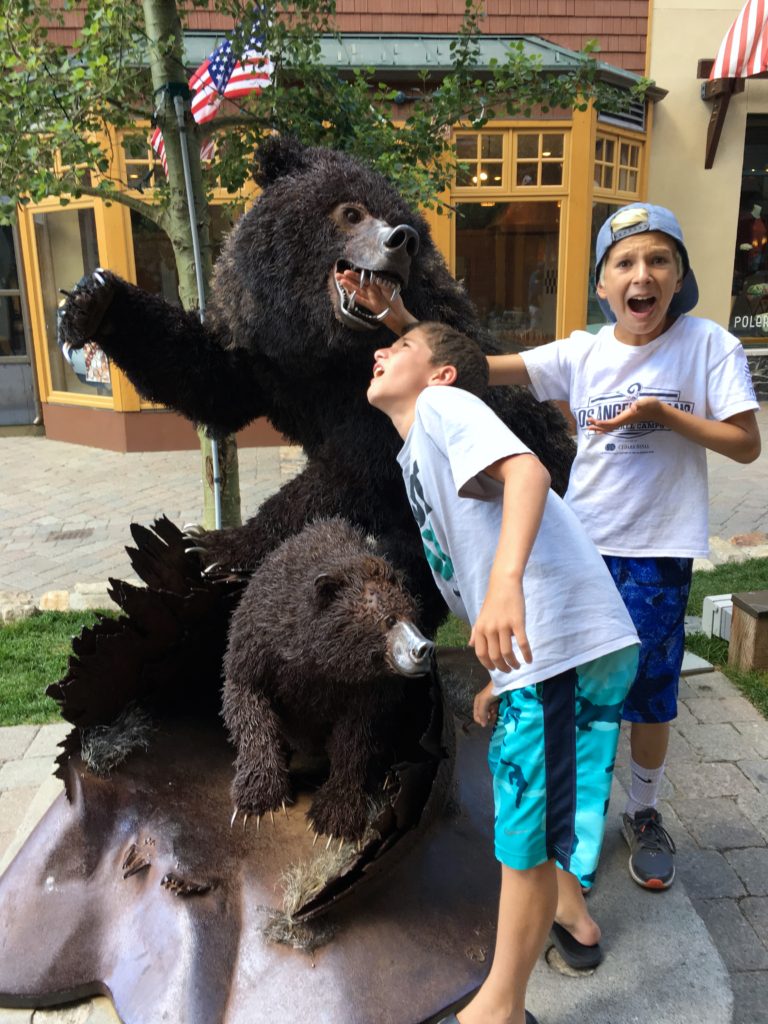 Don’t try this at home

In the Summertime, a free, open-air trolly could take you almost anywhere you want to go. It was the last thing we did and a wonderful recap of our trip as we cruised by and relived our adventures. 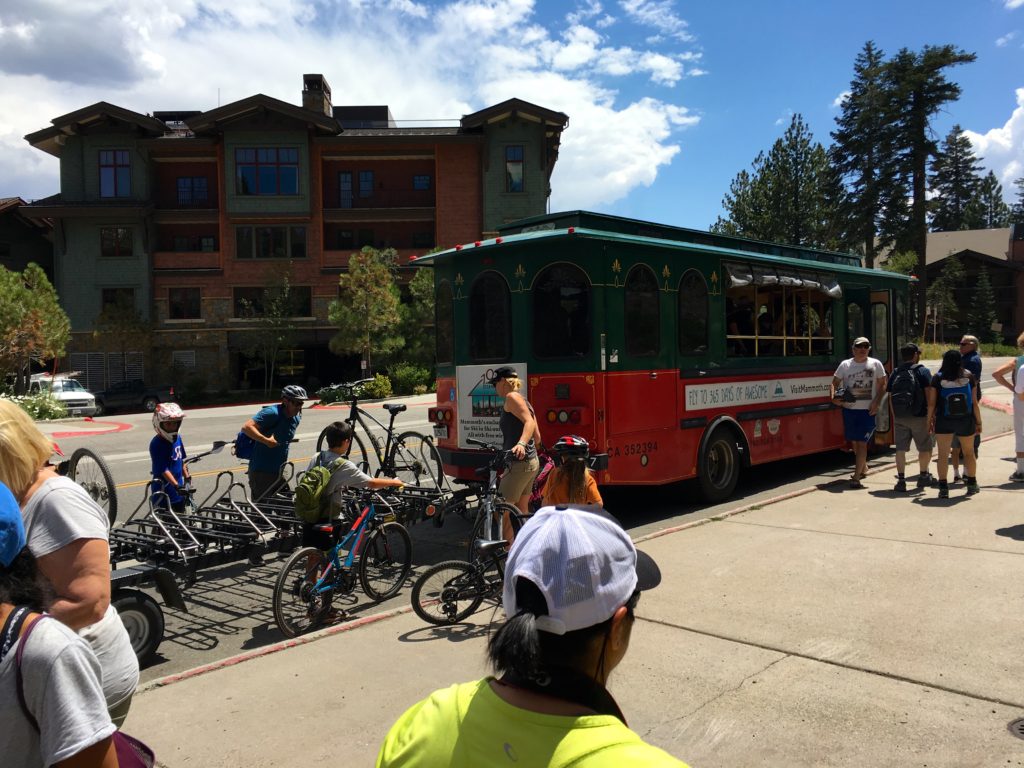 A Place for Everything, including bikes! 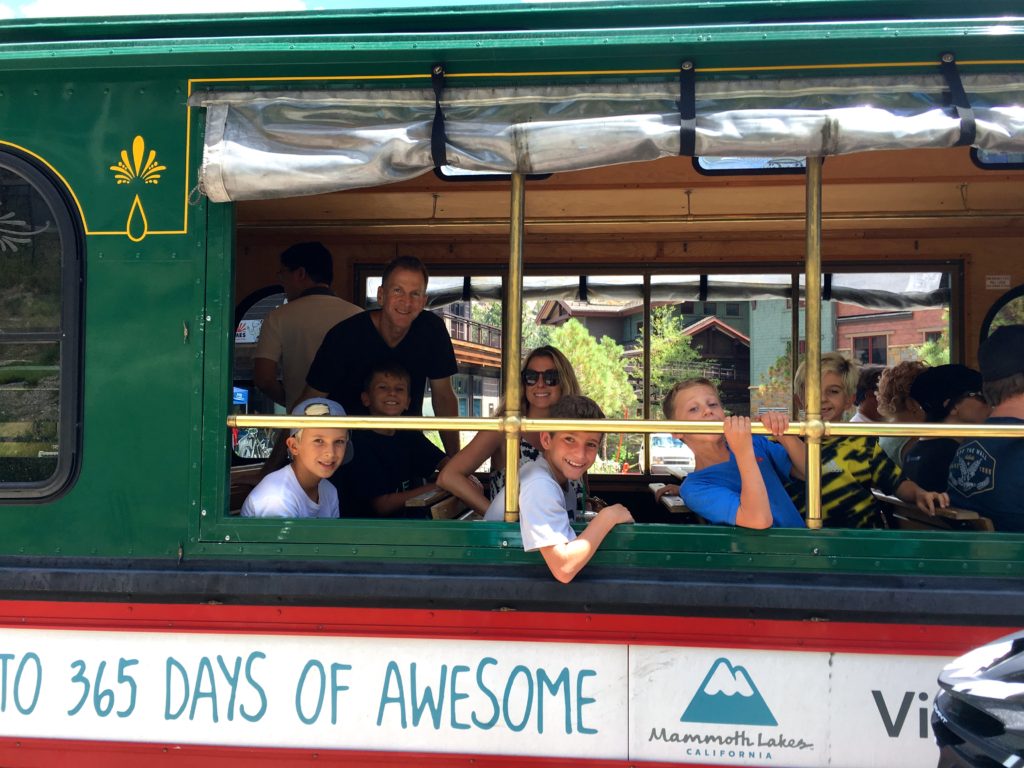 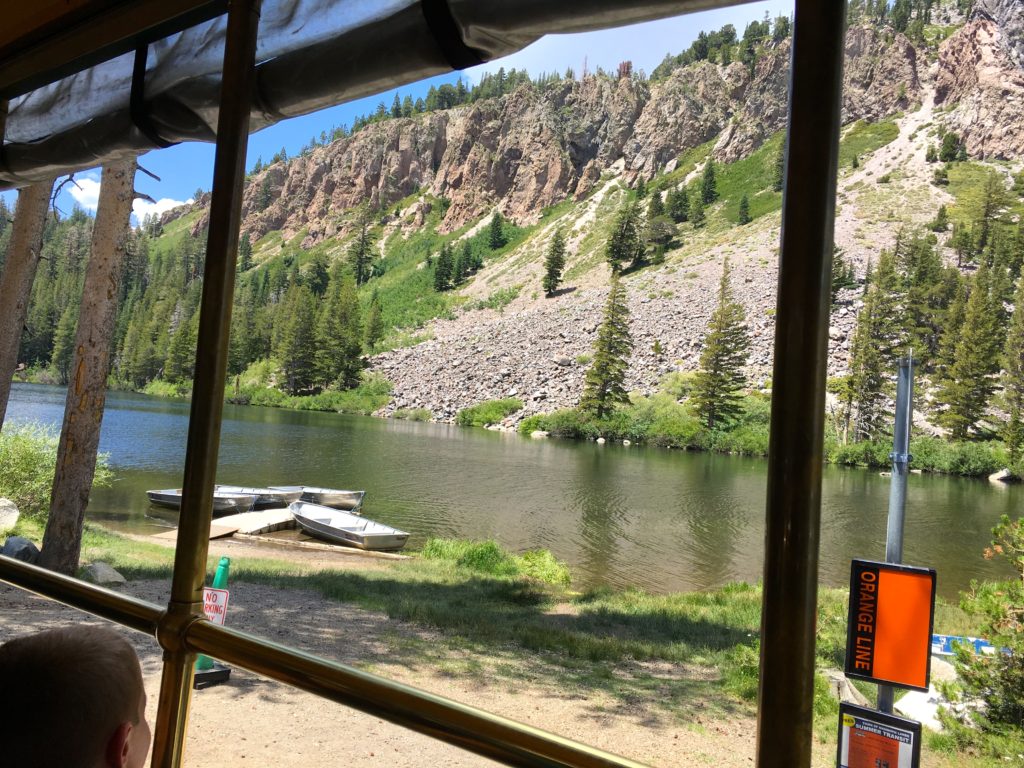 We passed horse rentals and new lakes to discover for next time…..and even passed some familiar sights…..

Getting To Mammoth Lakes from LA

Mammoth Lakes is about 310 miles from the center of Los Angeles. In ideal traffic conditions, it takes just over 5 hours to drive via US-395N. There are private charter flights available and also United does a seasonal route. CheapOair is known for its inexpensive flights. You can use the widget below to get the best deals.

Where to Stay in Mammoth

There are condos, timeshares and hotels. Use this map to see where everything is and how much it will cost during the time you want to go. 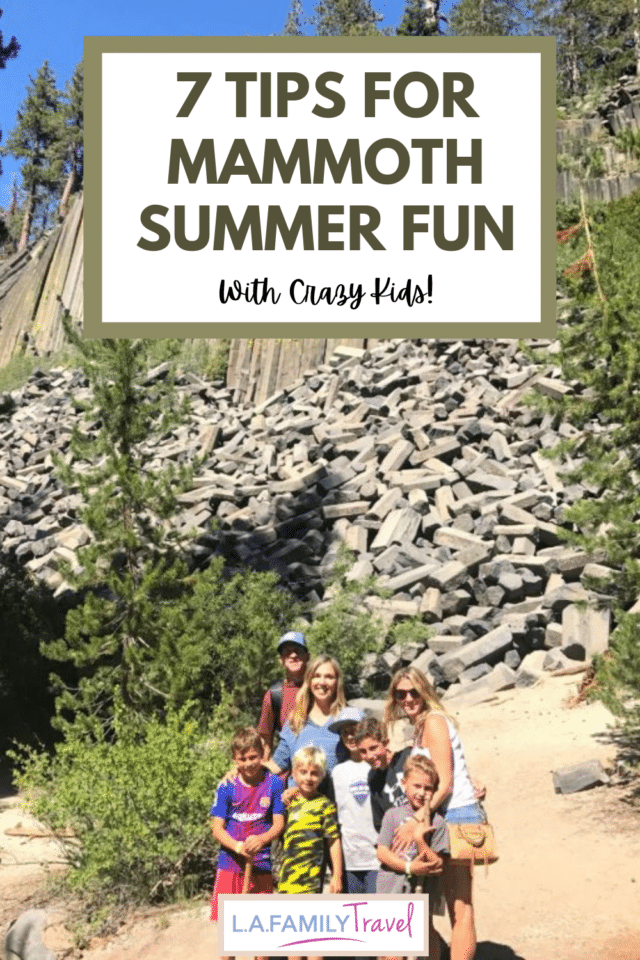