Things to Do in Pismo Beach For Family Fun! 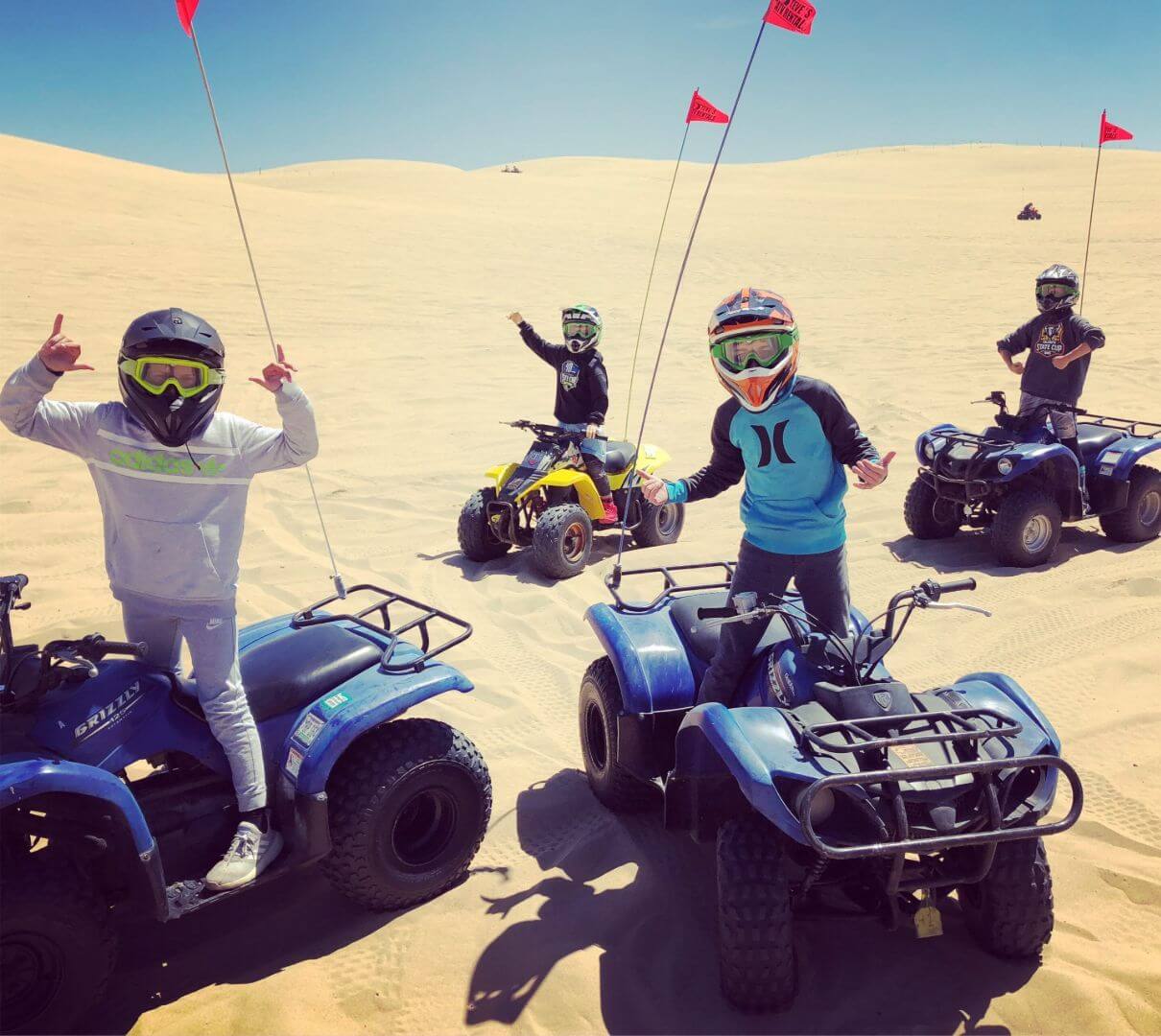 We’d seen pictures of all-terrain vehicles blasting through dunes in Pismo Beach, like Mad Max searching for an adventure in a post-apocalyptic future. It doesn’t seem too far of a stretch based on what’s happening in the world today but last Spring Break, it was just a fantasy that we thought would be fun to experience. And then go back to our safe, little homes when we were done.

NO TIME TO ENJOY THIS ARTICLE NOW? PIN IT OR BOOKMARK FOR LATER! 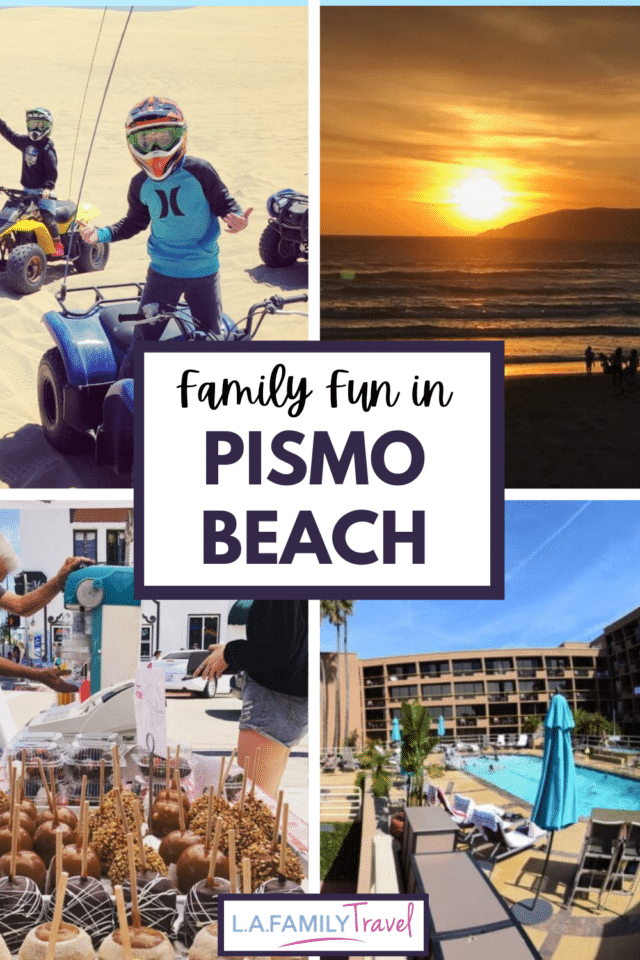 Video: Things To Do With Kids In Pismo Beach

You can watch the recap of our trip and then get the details in the article below on how to plan your own Pismo Beach trip with kids.

Where to Stay In Pismo Beach: Cliffs Hotel and Spa 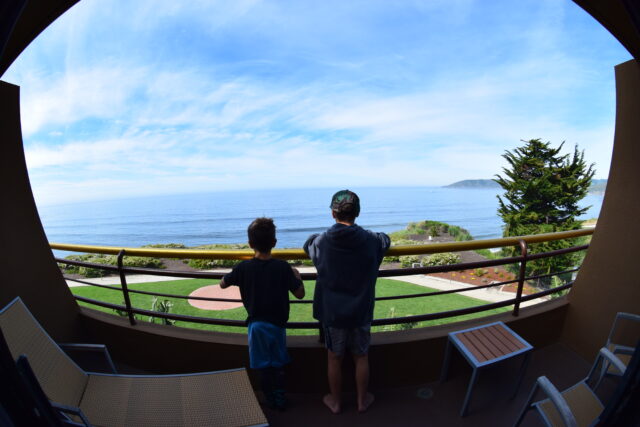 A Room With A View © Rina Nehdar

We joined our friends, the Millers, at the Cliffs Hotel and Spa. Overlooking the Pacific Ocean, our balcony opened to a view of the wide water, bordered on the right by a line of hills that drew away from the shore and dropped suddenly into the ocean. Sprinkles of sun bounced off the water. Inside, our room sported a retro beach vibe decorated in earth tones.

We had seen a few of the Millers as we checked into our room and my two boys didn’t stay to appreciate the sun or the view after putting on their bathing suits. Instead, they told us to meet them at the pool where the three Miller boys waited. 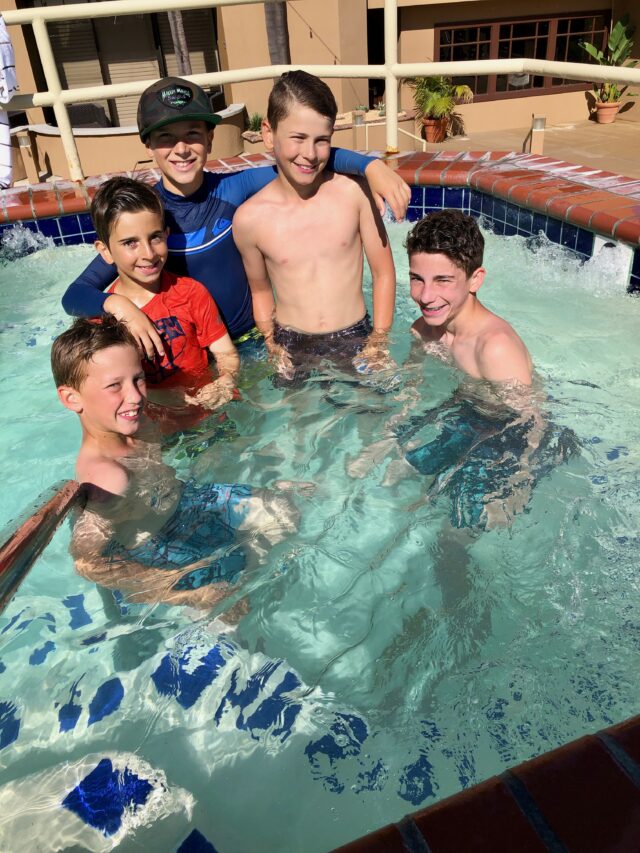 Boys Will Be Boys

ProTip: Vacations with friends are better because it keeps your kids from focusing (fighting) on each other.

We discovered the Cliffs Hotel and Spa loves children and welcomes dogs. You know how in some hotels you have to pretend your kids aren’t really kids but just miniature adults waiting for their growth spurt? Not here. As we walked along the pathways, kids appeared everywhere, some with parents, some with their pack. Screams of happiness carried in the breeze as they played games on the lawn around the hotel. Dogs led their owners on paths perched atop its namesake cliffs. Rooms manager, Travis Domingues, later told me that the hotel’s first floor is open to guests with dogs. Though, after the Thomas Fire, the Cliffs Hotel and Spa allowed dogs to occupy all the rooms in the hotel when their families had to evacuate their homes. Domingues said it was chaotic but heartwarming. 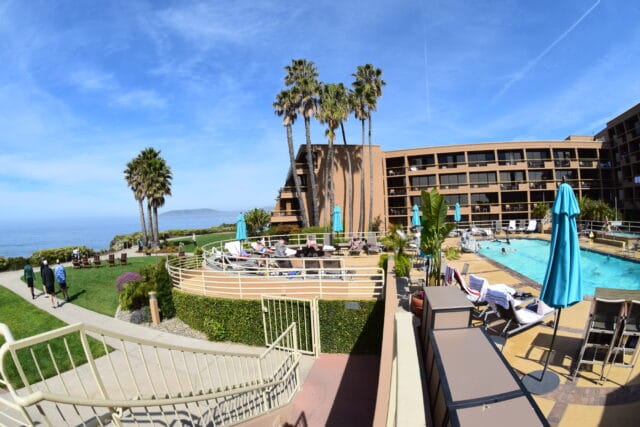 DON’T MISS! 40 Best Things to Do In California

We enjoyed the poolside service of cocktails and snacks while our boys invented games by the hot tub and pool. Being in the central part of the state, I expected clouds and cool conditions but the sun shone bright and seagulls drifted in the salty air of blue skies. I later learned there are 315 sunny days in Pismo Beach every year. Silly me. 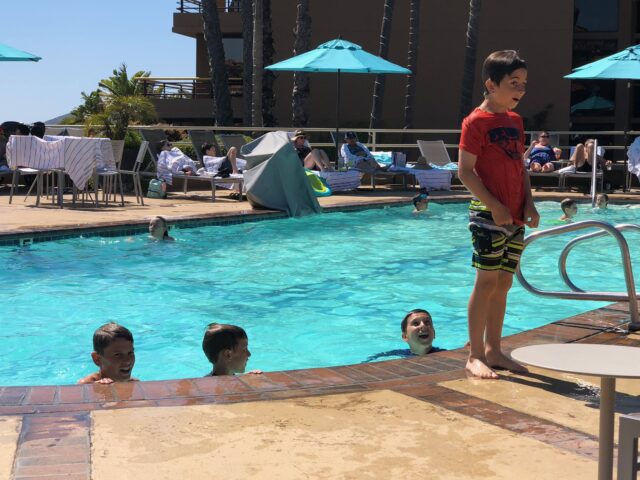 The hotel provides an evening wine-tasting and snack experience, free for guests, in the lobby. They poured a local favorite of ours the night we attended, a cabernet sauvignon from Rabble Wines. We had the good fortune of discovering the Rabble Wines tasting room called Tooth and Nail, the last time we visited the area. 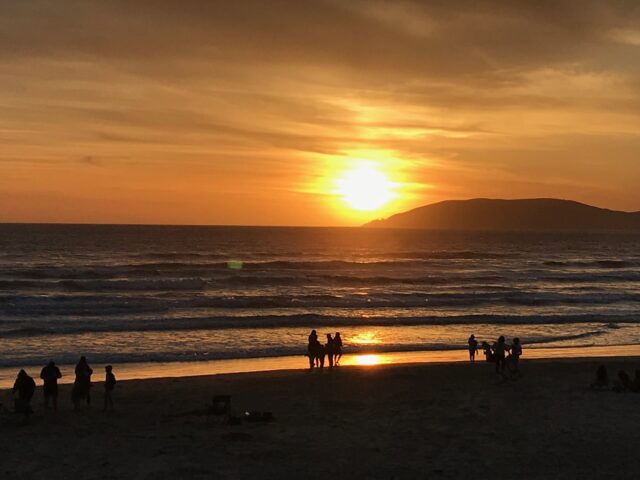 We gathered our group to explore downtown Pismo Beach, which was a network of streets with vintage, single-story homes occupied by restaurants and specialty shops. At the crown of the town is the recently fortified and reconstructed pier and cobweb of boardwalks rising above the beach. We chose to eat dinner at Wooly’s which offered casual deck seating looking over the ocean, the slow-setting sun, and the length of the pier. Dogs, kids, and laid-back people enjoyed creative American fare with affordable price tags. We paid $60 for drinks and food for the four of us. We felt our city tension melting into the sea and our smiles easing into our faces. 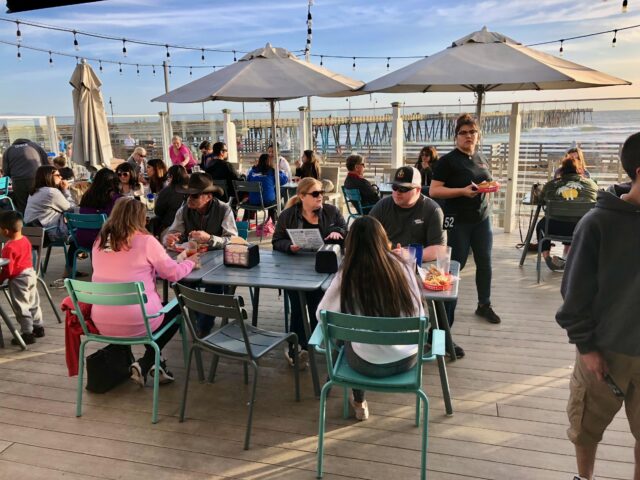 Easy – What Else Do You Need For Dinner? © Rina Nehdar

The next morning, we set out early to find the mythical dunes of Pismo Beach, a complicated latticework of desert that dipped and rose across the horizon, spilling onto the waves of the Pacific Ocean. There are 23-miles of coastline in Pismo Beach, and, combined with the dunes, that’s 3,500 acres of off-road vehicle fun. It’s the only beach in California that allows people to drive on it. Our friends had made reservations at Steve’s ATV so we tagged along to their office, about a half-block from the ocean. One thing we noticed immediately was the free beach parking. Coming from Los Angeles, we’d never heard of such a thing. It appeared as if our group arrived at Steve’s ATVs at the exact same time as everyone else but Tammi, at the front counter, was very talented and patient at juggling everyone and made sure all were in the right vehicles for their size and experience level. Everyone in our group rented either an ATV bike or dune buggy to ride the Sahara-like dunes of Oceano Dunes State Vehicular Recreation Area or SVRA. 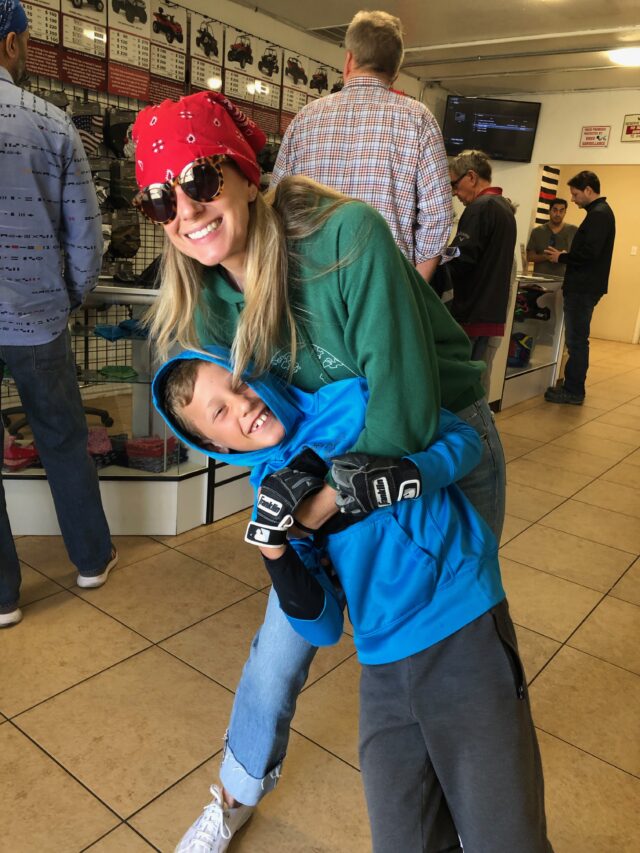 Next, a short yellow school bus took us deeper into Oceano Dunes SVRA, where the staff at Steve’s ATV set up a shop in a mobile unit and told us we must watch a video before we rode off to warn us away from being foolhardy. That was when I realized I had forgotten my ID in my car, so I had to take the short school bus back and thought I had missed the screening. When I returned, my youngest son who is eight, took my hand and told me it was a good thing I missed the video because it was “kinda scary.” However, I had no such luck. It turns out, it is a prerequisite to ride at Oceano Dunes SVRA to watch that video. So, I watched it by myself. And I totally understood why Knox had gotten spooked by it. They showed visitors who thought there was nothing to fear barreling over dunes, flying in a way that they lost control of their vehicles and suffered several broken body parts as a result. After the video, I wasn’t as keen to ride either but I told myself I was in complete control of how fast I was going and I had nothing to prove, which is something, I think, with which people sometimes grapple. However, the video did scare off the youngest member of our group, seven-year-old Camden decided the risks weren’t worth the rewards. The rest of the group set off. 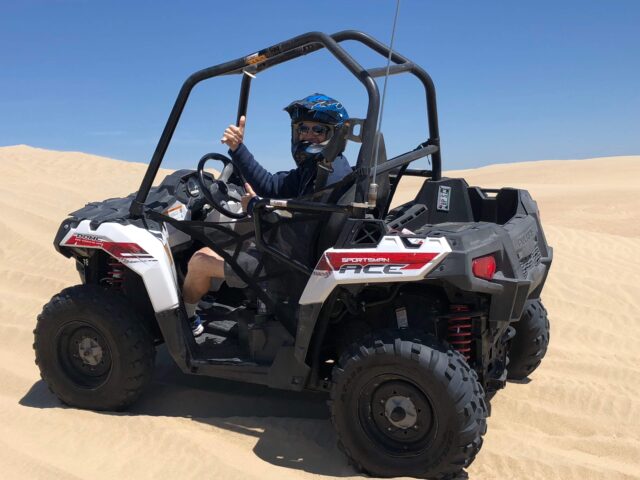 The first part of our ride consisted of a brief lesson on how to actually control the bikes. Steve’s ATV designed a track to get new riders comfortable with using the bikes. This was welcome after the horror the video had put into our heads of the possibility of getting hurt. The practice course made us all more comfortable. 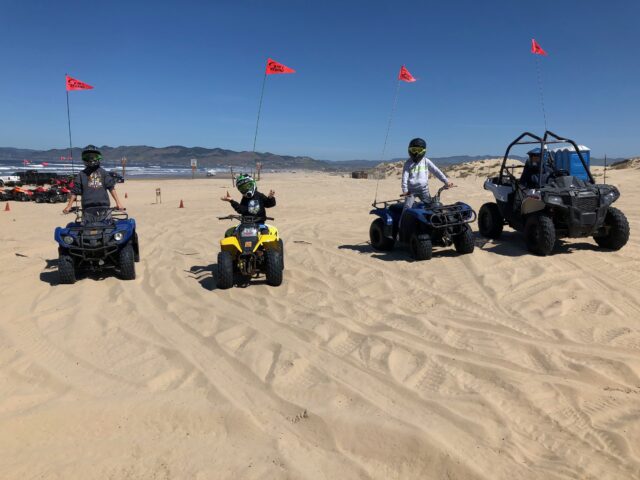 Can We Go Now? © Rina Nehdar

DON’T MISS! The Best Things To Do With Kids in Bermuda

I’m not going to lie. There were many stops for boys who hit their accelerators too slowly during take-off that sunk their back tires deep into the sand. There were many times I had to get off my bike to execute the little lift, the video also taught, to extract those bikes from the clutches of said sand. Many, many stops. But honestly, after seeing an ambulance off in the distance rescuing another rider and later, a boy at the hotel wearing a new arm cast, I was glad they were being cautious. We rode along the various areas that seemed safe for our skill level, ascending upon tall dunes and riding along closed-off hills.   At one point, I lost the group. For a few, too brief, moments, I sailed across the beach, ocean water dancing to my right, the quiet dunes to my left. RVs and tents sat along the water in makeshift campsites. I felt the breeze graze my arms and spirit. It’s nice to ride free on occasion. Later, the boys declared the ride was their favorite part of the trip.

We’d seen pictures of all-terrain vehicles blasting through dunes in Pismo Beach. Read how you can have your perfect family adventure there too.

Where to Eat in Pismo Beach 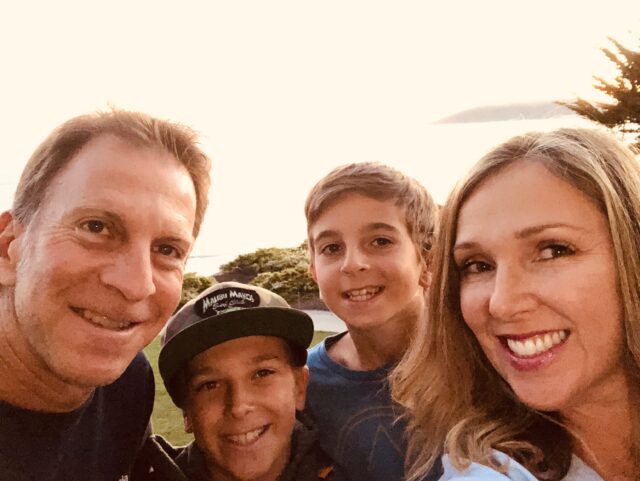 On our last night, we decided to split up and have family dinners on our own. Our family chose ocean-front Ventana Grill which had many personalities. This upscale oyster bar is a great option for date night or a girl’s night out but since this was neither, we enjoyed the perfectly crusted calamari and clam chowder, which was so fresh we could taste the flavor of every individual ingredient. It wasn’t over-cooked like many of these creamy sea soups. The drinks were wonderfully mixed and festive. My garlic black-tiger shrimp had the right blend of garlic and pepper, a savory dinner with a delightful crunch. 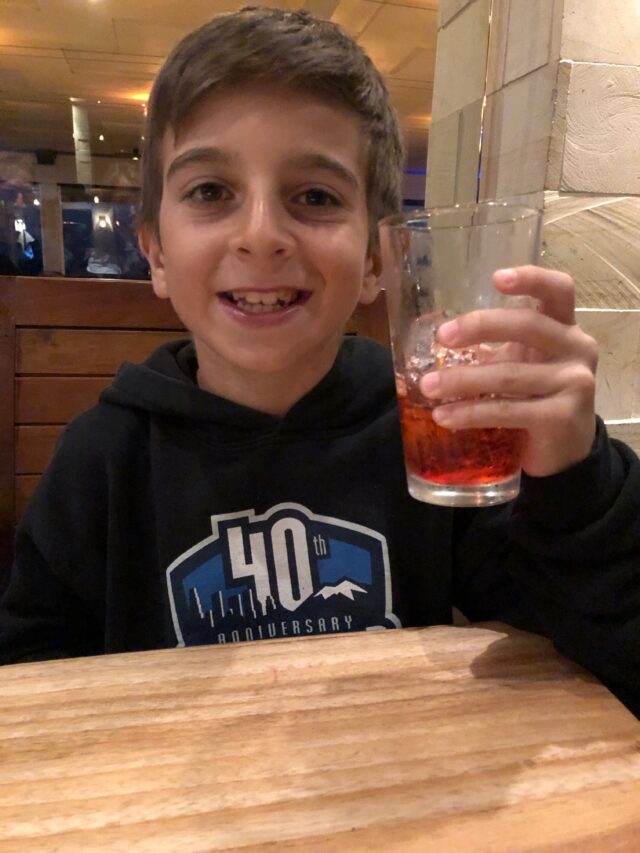 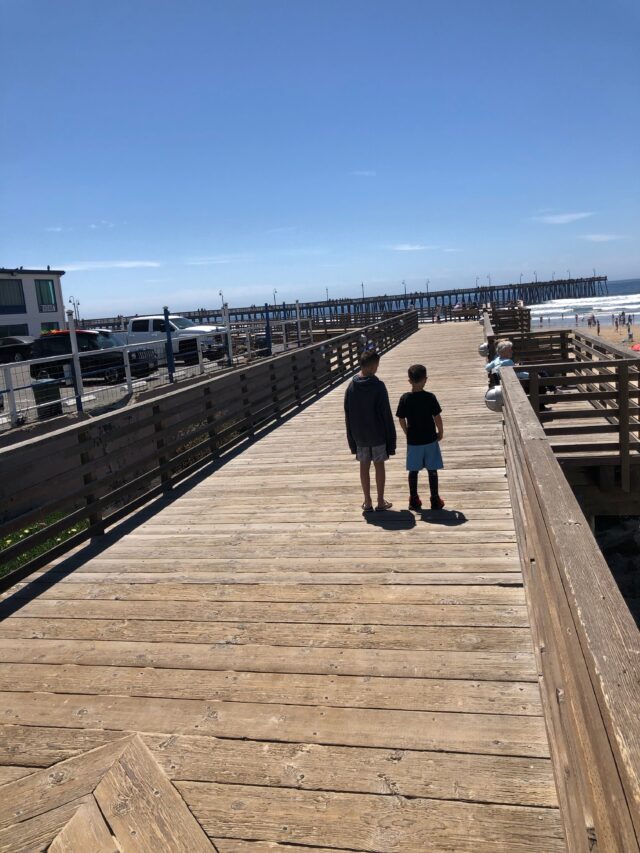 We couldn’t say goodbye to Pismo Beach the next day without spending more time in the town. After breakfast at Penny’s All-American Cafe, which had great service and is ideal for those wanting a traditional American breakfast (my husband walked down the street to find an organic smoothie place), we wandered toward the ocean. We passed a storefront called Mike’s Ideal Barber Shop and the boys decided they wanted haircuts. This wasn’t the strip mall, discount hair shop that they were used to. This was an experience. Zack and Zeak styled them with a sharp flourish and left them feeling dapper.    We continued our way toward the pier and although it was a Thursday, it felt like a Sunday with so many meandering families exploring the shops, eating candied apples, and lining up to sample the “Best Clam Chowder In the World” in various locations. We walked along the raised boardwalk, watched the dogs playing in the sand, and enjoyed feeling apart from the regular rush of our lives. 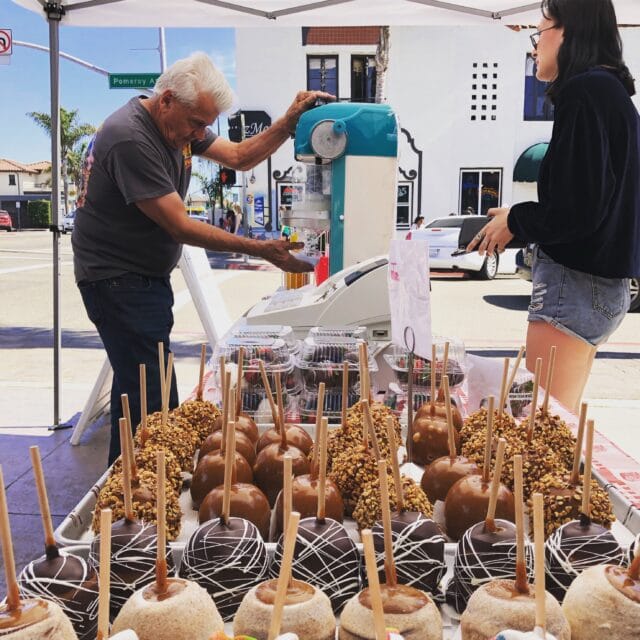 You have the sweetest apples. © Rina Nehdar

We didn’t hurry home. After driving for about an hour, we stopped at Bob’s Well Bread in Los Olivos for a late lunch because we had heard how incredible this place is. We had heard right. The cashier told us they close when they run out of food and by about 2 pm that afternoon, it looked like they were close. The boys really enjoyed the exotic loaves of bread and sandwiches which is not a little deal. Highly recommend finding this place if you’re driving in the area. The town looks like what would happen to any thriving town in the wake of an apocalypse with this modern bakery serving as the template to build again and build well.

We want to thank the Cliffs Hotel and Spa, Steve’s ATV and Visit Pismo for hosting portions of our adventure.

Ready For A Laugh? Watch This! The Reluctant Hiker: When Your Kids Won’t Cooperate

Pismo Beach is about a three-hour drive along the US 101- N from both Los Angeles, where we came from, and San Francisco, just in the Southbound direction.

Where Else To Stay In Pismo Beach

We loved our stay at the Cliff’s Hotel and Spa and if you use TripAdvisor when booking you could search for the best deal from all the online booking sites at once. You could also read about the amenities each hotel offers plus feedback from previous family’s stays. If an VRBO is more your style or the Cliffs are sold out, try this interactive map to see prices and availability of other accommodations in the area. 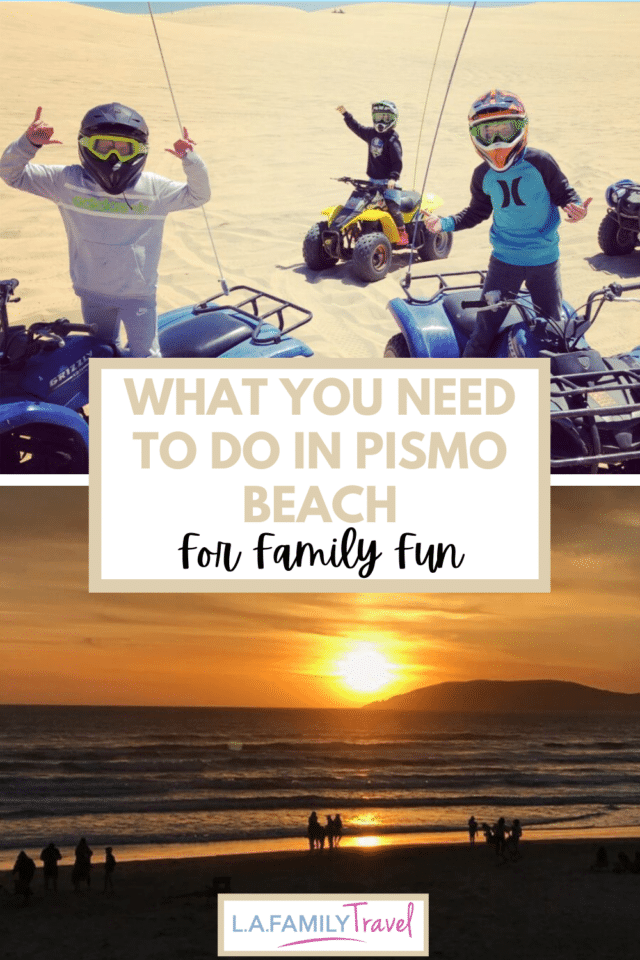