Best Places to Eat in Ohio With Kids 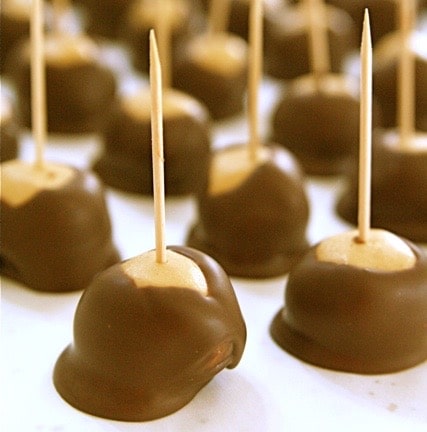 Ohio, in the foodie world, is best known for its Chocolate Peanut Butter candies called Buckeyes. These are named after the state nut – which is poisonous, by the way. We do, however, have a lot more food to offer!

If you’re visiting Ohio, even if you’re just passing through on a road trip, use this guide to eat something better than fast food. I literally wrote the book on Ohio food, so let me introduce you to my favorite foods, those you can only get in the Buckeye state.

NO TIME TO READ THIS ARTICLE? PIN IT OR BOOKMARK FOR LATER! 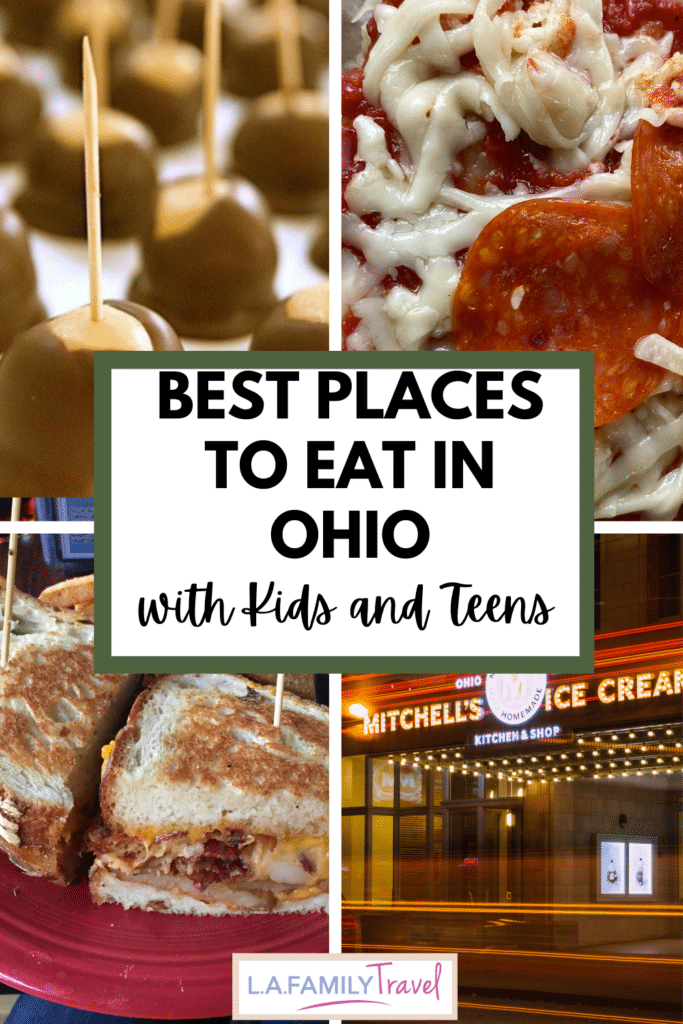 Melt Bar and Grilled is a statewide, gourmet grilled cheese sandwich chain. Melt has a very diverse and large menu, including a great kids menu and a selection for vegetarians. They also have a huge drink menu, which includes plenty of fun, non-alcoholic options too! Don’t let the word “bar” scare you. I always see kids dining there when I go. Melt offers many great seasonal sandwiches, so you’ll want to visit more than once if you get the chance! It’s worth noting, the sandwiches at melt are huge! My sister and I can easily split one. 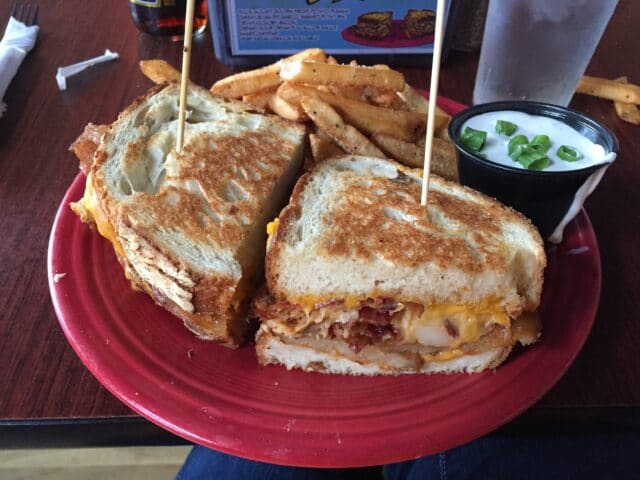 This is my favorite Melt sandwich, the Potato Bacon Bomb. It’s several types of potatoes, cheese, bacon, and a sour cream sauce. Sadly, it’s only available in January and February. Honestly, though, that’s probably a good thing for my cholesterol levels.

Cincinnati Style Chili is chili spooned over spaghetti, and sometimes topped with onions and cheese. In 2013, the Smithsonian named it one of the “Most Iconic Foods in America.” Cincinnati style chili is almost never served by the bowl. It’s really a topping. Calling the dish “chili” is a bit of a misnomer because it’s not like the soupy style chili you’re thinking. Instead, think of it as more of a spiced meat sauce. The most famous is Skyline Chili, but you can try the dish in most of the diners around the area. The ordering system is based on “Ways” – which is how it will be served. Such as Two Way: Spaghetti topped with Chili; Three Way: Spaghetti, Chili and Cheese; Four Way: Spaghetti, Chili, Cheese and Onions or Beans; Five Way: Spaghetti, Chili, Beans, Onions, and Cheese

Skip the fast food on your next trip and try the best food in the Buckeye State! From Ice Cream to Lake Erie Fish, we have a lot to offer!

Ohioans love Ice Cream! Each of our major cities has its own favorite ice cream company. Mitchells and Honey Hut is in Cleveland, Jeni’s in Columbus, Handel’s in Youngstown, and Graeters in Cincinnati. I’m partial to Honey Hut, especially since they carry my favorite flavor, Banana, year-round. But all of them are excellent! Why did a state where it’s below freezing at least 5 months of the year inspire at least 5 different major ice cream brands? Let me know if you find out.

PRO TIP: Mitchell’s Ice Cream has a factory located on West 25th street in Cleveland, and you can watch the ice cream being made from several glass windows. Go upstairs for the best view. 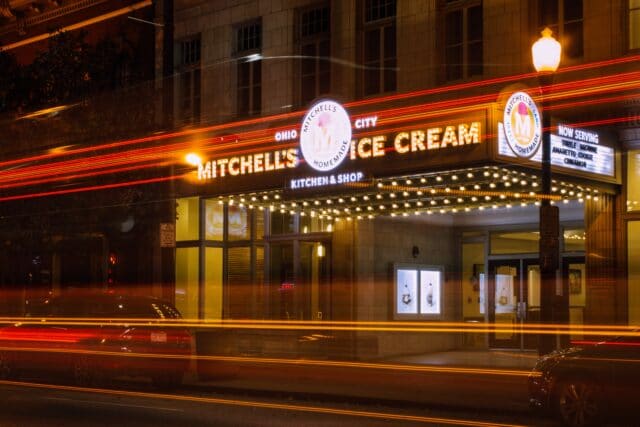 I have always enjoyed watching the ice cream making process at Mitchell’s, it’s definitely not something you see every day. Photo courtesy of DJ Johnson via Unsplash.

Don’t Miss! Our 9 Favorite Family Friendly Things To Do in Charleston

Did you know that Ohio has its own style of pizza?  Ohio Valley Style Pizza is made by piling cold cheese onto a thick but soft crust with hot tomato sauce (usually with cold pepperoni) and then cut into squares. Order it with extra cheese, trust me.  DiCarlo’s in Steubenville invented it, so there is no better place to give it a try. 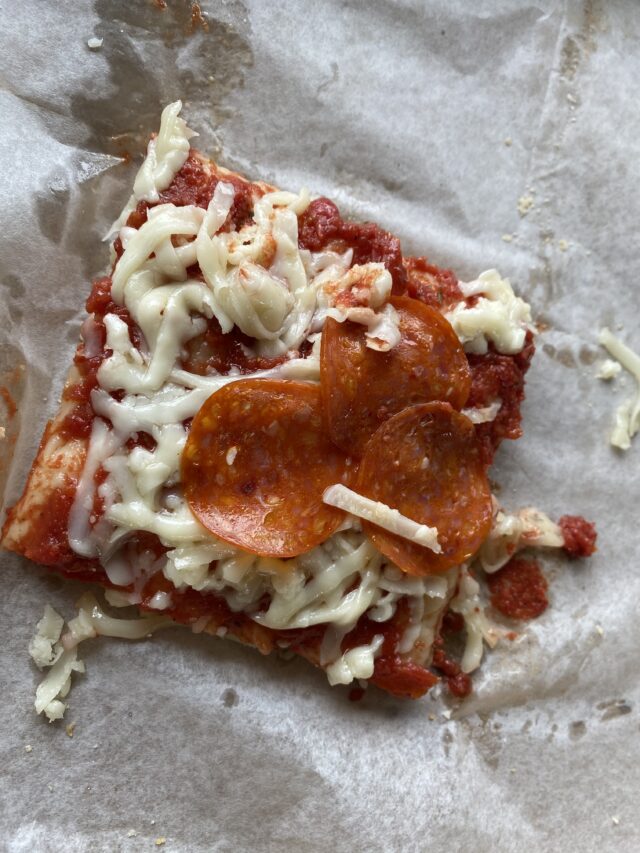 A piece of DiCarlos pizza, accidentally ordered without extra cheese, A tragedy really.

Tony Packo’s is arguably the most famous restaurant in all of Ohio. That’s because Corporal Max Klinger, from the TV show MASH, portrayed by Toledo’s own Jamie Farr, missed it and talked about it a lot on the show. If you find yourself in Toledo,  stop in and try a “great Hungarian hot dog, with chili peppers, and a cold beer” which was Klingler’s favorite! In 1972, Burt Reynolds stopped by for a bite and when asked for his autograph, he grabbed the closest thing, a hot dog bun! Since then, hundreds of celebrities, presidents, and astronauts have signed  buns, which are proudly displayed at the restaurant. 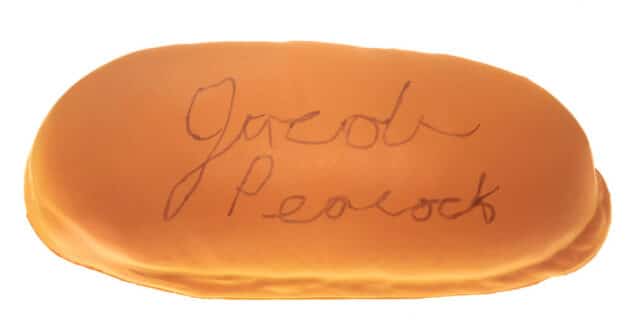 The buns are actually plastic and you can buy one at the gift store if you want to join in the fun. Photo Courtesy of Jacob Peacock via Wikimedia

In the spring, you can find Lake Erie Perch being sold at just about every Catholic Church in Ohio! Since Catholics traditionally skip meat on Fridays during lent, many churches decided to do fish frys to fill the demand for fish and as a fundraising opportunity. There are many seafood restaurants along Lake Erie where you can also get a Lake Erie Perch sandwich – if you don’t find yourself here during lent. If you’re in the Mentor/Grand River Ohio area, I’m particularly fond of Pickle Bill’s. As a kid, I was fascinated by all the cool decorations. As an adult, I love the outdoor dining right on the lake. All summer long, fresh Lake Erie fish find their way into sandwiches, platters, and even tacos.

Possibly the most famous of Ohio’s microbreweries, Great Lakes Brewing Company makes a lot of great specialty beers. The most famous is their Christmas Ale, which features cinnamon and spices. It’s a heavier beer, perfect for winter. It’s worth noting, they only brew Christmas Ale once a year, at Christmas time. Sometimes, I will see Christmas Ale for sale in July, but since they do not brew it that month, you know it’s old beer. I wouldn’t recommend trying it then, it’s just not the same.

They also make a brew named after Elliot Ness, a famous prohibition agent who served in Cleveland. They named a brew after him because, famously, there is an actual bullet hole from him in the bar area of the restaurant. Elliot Ness is an amber lager, it’s a pretty dark beer.

They also named a beer after Commodore Perry, who led Navy ships in nearby Lake Erie during the war of 1812. Commodore Perry is an IPA. You can take a tour of the brewery and learn about how beer is made. Don’t have a lot of time? You can pick up their beer at most grocery stores in Ohio.

PRO TIP: Some towns and counties in Ohio do not allow beer sales on Sundays.

So remember, no fast food when you’re in Ohio! There are so many great places around the state to eat! Ohioans are obnoxiously friendly, we can’t help it. I couldn’t possibly cover every town in Ohio, so if you find yourself in a small town, just stop by any local gas station and ask someone where to eat. They will be more than happy to brag about their secret local spot in town. I promise. You might even end up with a new friend.

We use TripAdvisor.com to find and compare the cheapest flights and Booking.com below for the best deal on hotels where we want to stay.

IF YOU ENJOYED THIS POST, PLEASE CONSIDER PINNING OR SHARING IT! 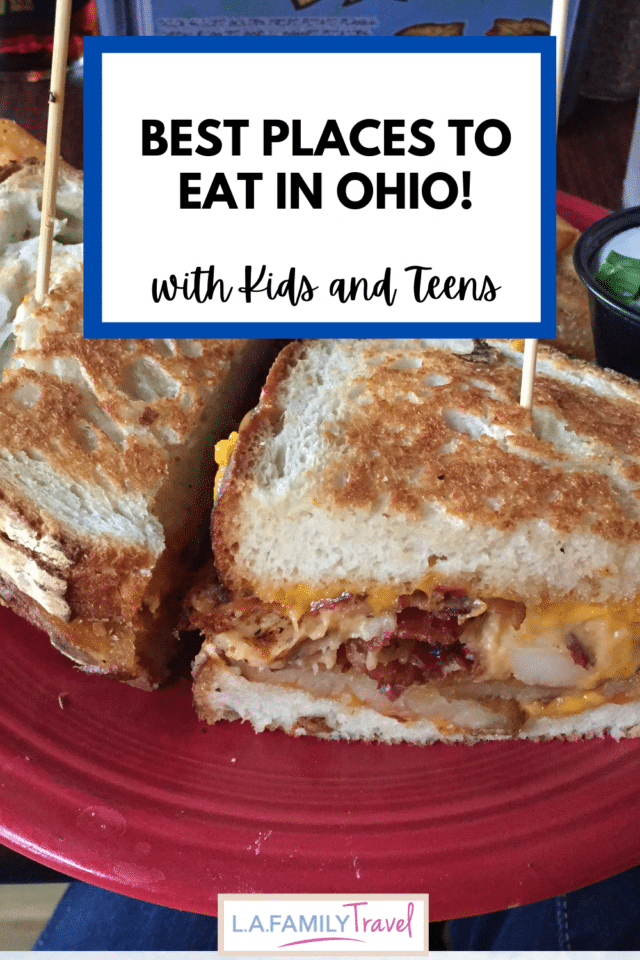 Emily Householder Stacey is a travel agent and writer based in Sunny Cleveland Ohio. When she isn’t writing or booking travel for her clients, you’ll find her trying out new restaurants with her husband or chasing her toddler because he does not want to go to bed.