Dover: A Day Trip from London 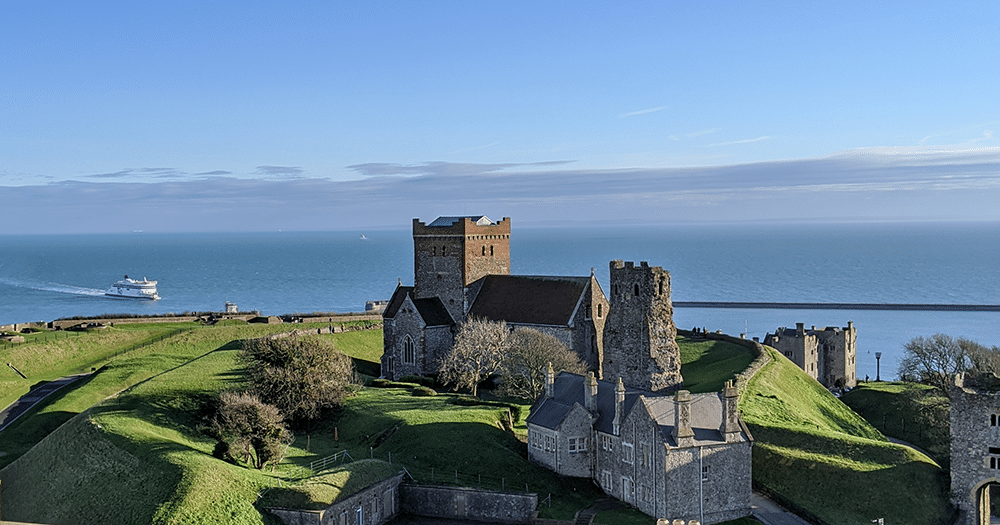 We had one extra day in England. I had always wanted to see more of the United Kingdom than just the London area. And can I tell you a secret? I’d always wanted to see an old castle. When I say castle, I don’t mean the sophisticated splendor of Windsor or the crowded tourist lines at the Tower of London (although both of those places are wonderful). My inner child always wanted to see the old ruins of a castle on a lush green hillside, a place where magic could happen, a place for princesses in flowing dresses.

So I did what any aspiring princess would do. I used Google. I searched for every castle within an easy one-day trip from London, and one, in particular, caught my eye. 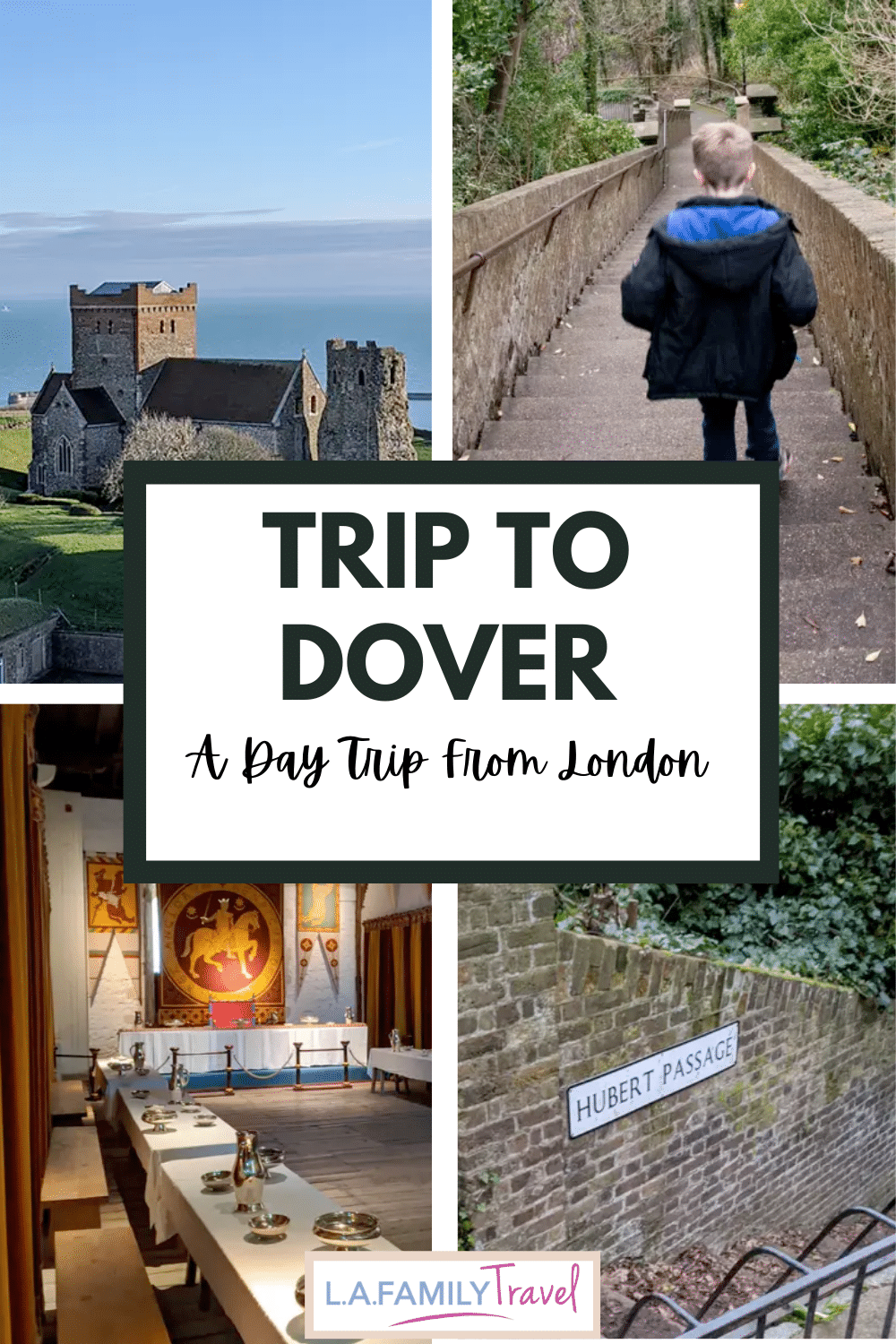 When I saw images of Dover Castle’s hilltop perch above the English Channel, I was intrigued. On the southeast coast of England, Dover is known for its towering, white chalk cliffs and hundreds of years as a major port. But what sealed the deal for our history-loving family was the area’s essential role in World War II. Best of all, London to Dover is a short, one- or two-hour train ride, making a visit easy to fit into our schedule.

Although we had ridden many trains by that point in our trip, we still enjoyed the ride to Dover with its view of the Kent countryside, including oast houses and surprise castles and cathedrals. We were able to see the ruins of Canterbury Castle just outside the window as the train sped past, with Canterbury Cathedral in the distance. 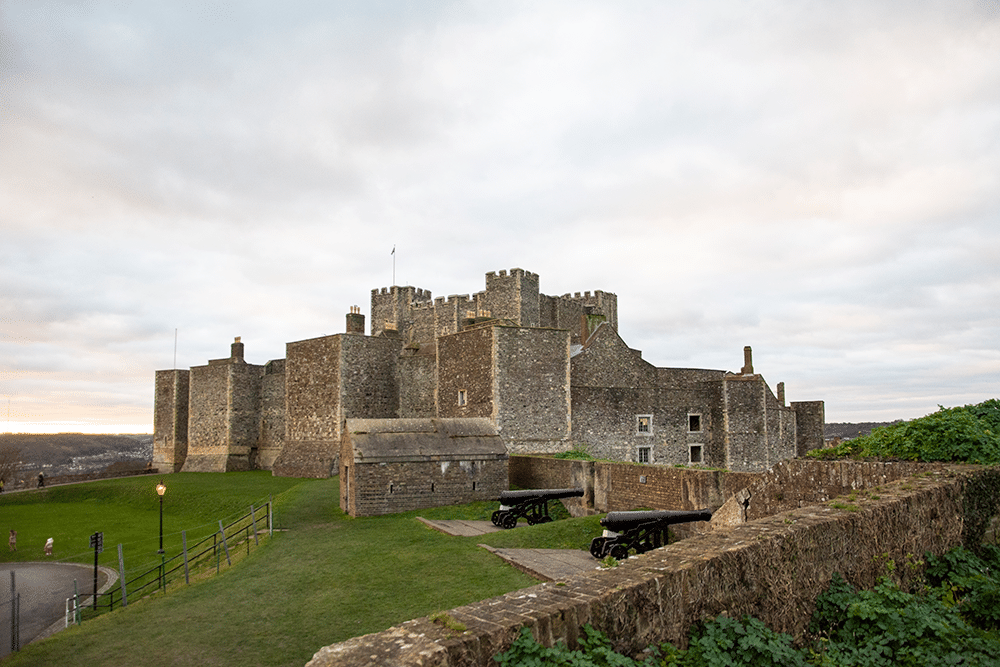 Centuries of history made visiting Dover Castle an easy choice for our family. Photo by Paul Nicholson.

When we got off the train at Dover Priory Station, we could see Dover Castle on a hill in the distance, overlooking the city. I gazed at it and thought, “We TOTALLY can walk that!” So walk it we did, moving in a general direction toward the castle and going through the downtown area of Dover. Signs for the castle led us to a forested hill and up endless steep steps. Eventually, we emerged through the trees at the ticket area, where normal people drive up in their cars and receive wristbands. The slightly surprised gatekeepers happily sold us wristbands as well, but I may have lost my license to choose family walking routes. All in all, it was just over a mile walk, but the steep uphill climb would be tough for many families, who might prefer to take a taxi or bus from the center of town. Our route took us to the small Canon’s gate entrance to the castle; alternative walking routes and bus drop-off locations will take visitors to the larger Constable’s gate. 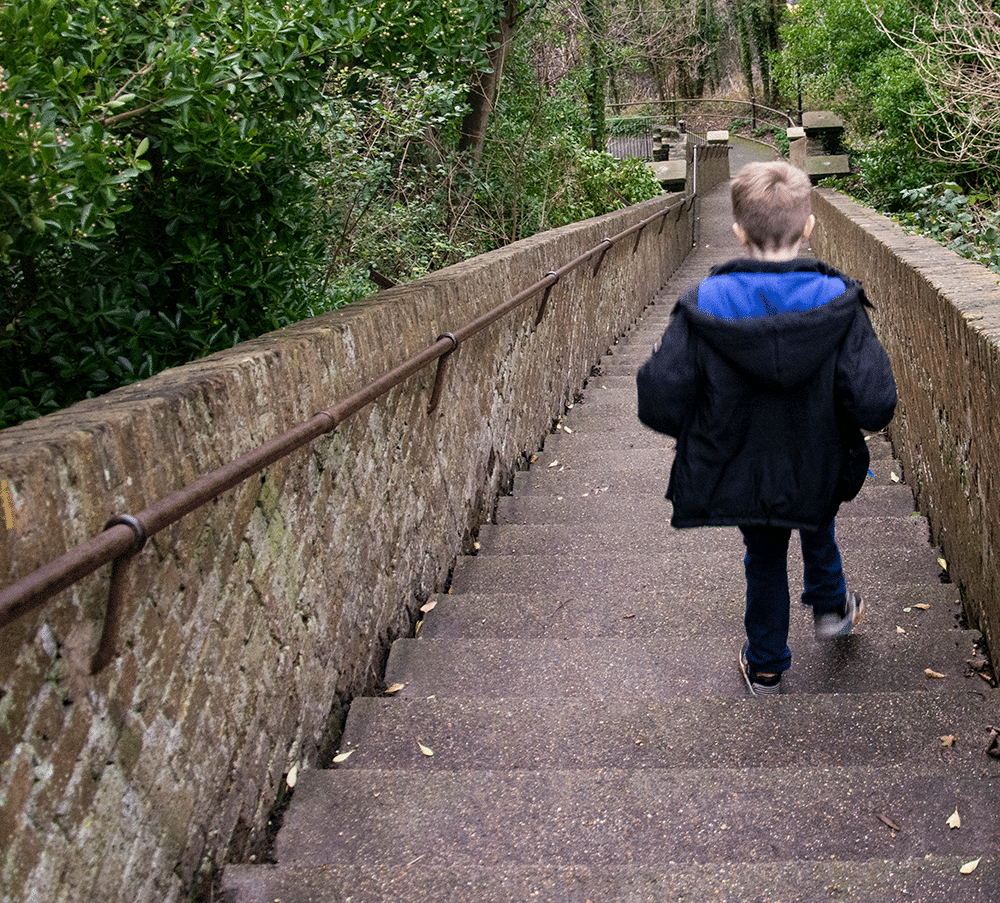 Just a small section of the steps I made everyone climb to reach the castle. And then we had to climb back down. I’m fired as the family navigator. Photo by Christy Nicholson.

After walking up a paved pathway to the entry area for the castle, we found ourselves gazing across the English Channel. It was hard to tear ourselves away from that beautiful view to see everything else. We decided to start our time at Dover Castle with a tour of the underground tunnels used during World War II, after the helpful staff gave us a hint about them — if the area’s World War II history is your priority, then make the underground hospital and the Operation Dynamo tours your first stops. The timed entry and limited capacity of the tunnels require careful planning, and the last tours of the day will be filled or have long wait times.

Dover is known for its role in World War II and the Battle of Britain, and the tunnel tours, with lighting and sound effects, are designed to recreate that time. My favorite parts of the tour, though, were the local employees who shared more about the historic events. I asked one guide if any vessels from the Dunkirk evacuation landed nearby, and he gestured up and down the coast, saying “Everywhere.” The guides also told us that Dover Castle was used as an active part of England’s defenses from its establishment in the 11th and 12th centuries through the 1950s. During the Second World War, nurses actually stayed inside the Great Tower to stay safe from shelling. 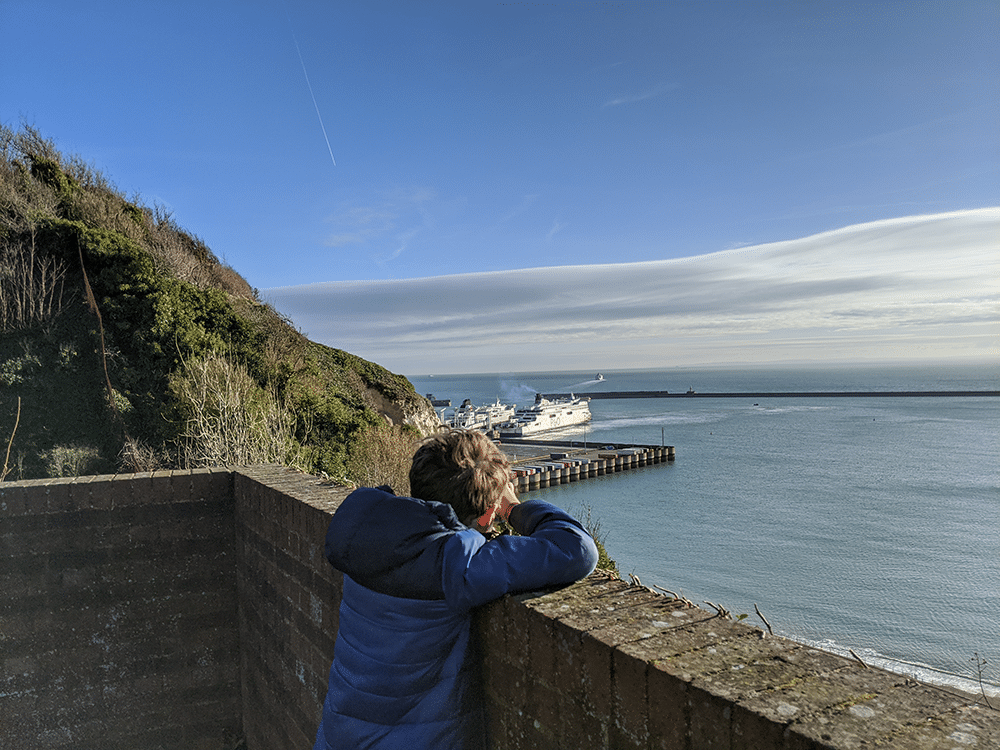 When you have this view, why go anywhere else? We loved seeing the coast of France in the distance. Photo by Christy Nicholson.

After our tunnel tour, we walked up to the main part of Dover Castle and passed through several stone gates to reach the inner part of the stronghold. We were tempted by the sight of the Great Tower and walked inside to start exploring.

In hindsight, I recommend that families start first in Arthur’s Hall, located in the walls surrounding the Great Tower. There won’t be many informational signs inside the tower itself, but the exhibition in Arthur’s Hall has plenty of pictures, diagrams, and timelines to give helpful background.

After the history lesson, you’ll be ready to tour the Great Tower, the keep of the castle. The centuries-old tower is full of furniture, props, and even holograms to show what life would have been like when the castle was built in the 1100s. While the employees scattered throughout the tower do not offer guided tours, they are happy to answer questions and explain anything you see (we asked one about the graffiti we found on a wall, and he explained that it was from French prisoners in the 19th century!). On weekends during busy seasons, Dover Castle invites actors for jousts, demonstrations, and reenactments to bring the castle to life.

Before leaving the Great Tower, be sure to climb all the way to the very top, where you will find a breathtaking view of the castle grounds, Dover, and the English Channel. It is so worth the climb!

Pro-Tip: If you hope to visit several historic landmarks in England, be sure to consider an English Heritage overseas visitor pass, which offers admission to over 100 sites across England. 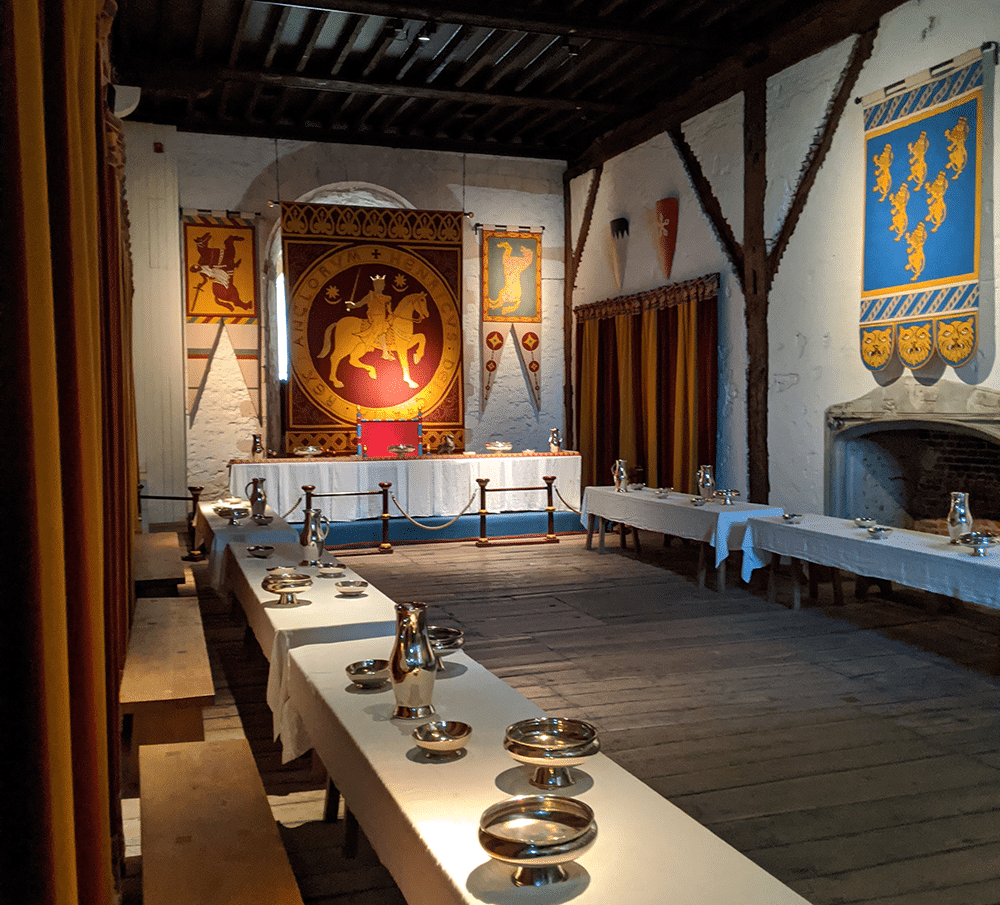 The keep, or Great Tower, of Dover Castle is decorated to show how it would have been furnished during the reign of Henry II. Photo by Christy Nicholson.

Don’t Miss! What To Do When Your Family Trip Goes WRONG!

My inner child always wanted to see the old ruins of a castle on a lush green hillside, a place where magic could happen, a place for princesses in flowing dresses. Here’s how to do it with your actual child.

After you see the main part of the castle, there’s plenty more to explore. The outer walls of the castle have stone towers and small passages with the slightly ramshackle feel of 1,000-year-old structures. Extra brave explorers can climb into the dark medieval tunnels that were used for defense in the 1200s. Walk along the battlements to look out over the former moat or to find the World War II-era anti-aircraft guns. (During our walk along the grounds, we were lucky enough to spy a fox roaming the hills.)

Dover Castle is also home to an ancient Roman lighthouse, built in the second century. The lighthouse, or Pharos, is the tallest remaining Roman structure in England and one of only three Roman lighthouses left in the world. Next to the lighthouse is the Church of St. Mary-in-Castro, which was originally built by the Anglo-Saxons around 1000 A.D. The building has been restored several times, most notably in the 1800s after it had been used for coal storage. The church still holds Sunday services for members of the community.

The castle grounds are family-friendly, with bathrooms and food options located in several areas. We enjoyed eating in the Great Tower Cafe, located in the walls of the castle, where kids’ meals and a table full of desserts helped us feel ready for more exploring.

Parents will want to keep a close eye on younger children near the steep hills and cliffs around the outer walls. However, the grassy courtyard surrounding the Great Tower offers flat ground and a mostly enclosed space that is great for tiny travelers.

After winding through underground passages and walking across battlements, we still had more of the castle to discover. Photo by Christy Nicholson.

After the castle closed and we climbed back down the giant hill, we decided to explore Dover a bit before walking back to the train station. As we wandered through the town, there were surprises around every street corner. One of my favorite finds was a tiny, gorgeous alleyway called Hubert’s Passage, which led to the remains of an ancient church. Built in the 11th century, St. James’ Church was destroyed in World War II. Today it is preserved as a ruin, with grass growing amidst the stone archways.

Next, we followed maps on our phones to walk to the waterfront, where we each took our turn dipping our fingers into the English Channel. Wanting to give ourselves plenty of time to catch our train back to London, we then decided to head back to the train station. First, though, we took a few moments to stop at a Costa (think English Starbucks) for hot chocolate and mincemeat pie.

If we had more time, I would have loved to see the other things to do in Dover, like the murals at the Roman Painted House or the Bronze Age Boat in the Dover Museum. And while we were on top of the famous white cliffs of Dover when exploring Dover Castle, we could only see a small bit of the chalk walls from the castle or the beach (although I did get a piece of chalk stuck in my boot). To see more of the cliffs, visitors can take a walking tour, book a boat ride, or even take a ferry to and from France. If you want to eat dinner before heading back to London, try The White Horse pub near St. James Church. 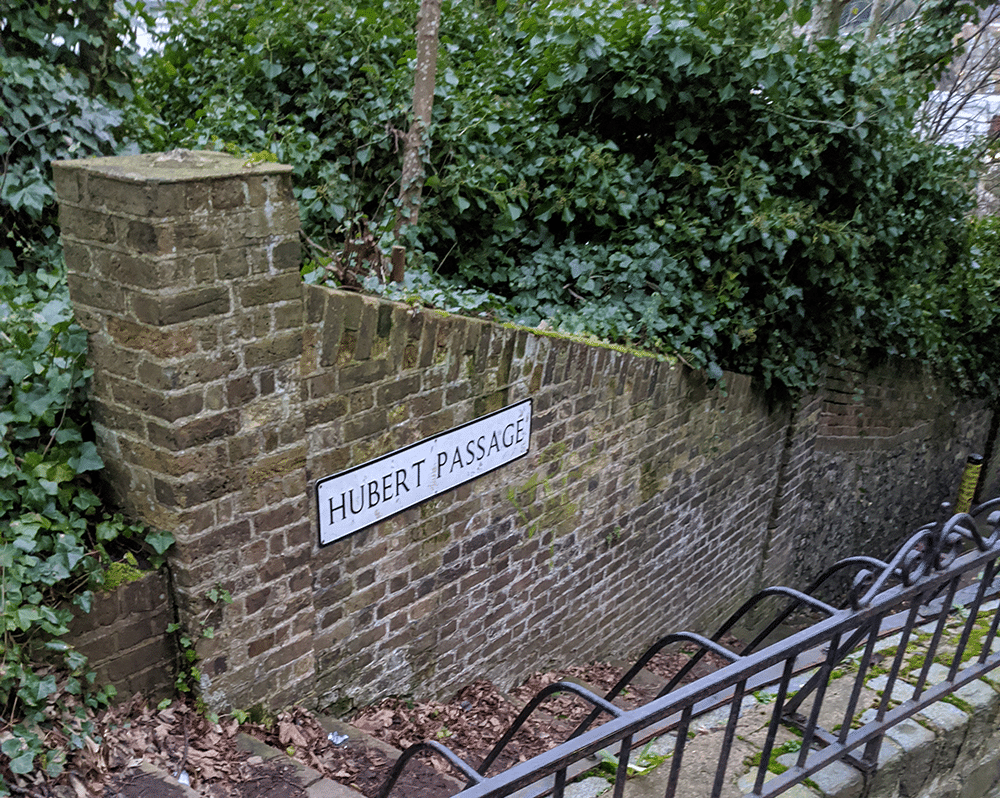 This charming sign led us to the gorgeous ruins of an ancient church. Photo by Christy Nicholson.

Dover is known for its towering, white chalk cliffs and hundreds of years as a major port. But the area’s connections to Ancient Rome, medieval England, and World War II are what made our history-loving family plan a visit.

The train from London to Dover departs from St. Pancras International. Several trains run from London to Dover throughout the day, including express routes that take just over an hour. Our train left early in the morning, which was a wonderful time to take a picture at the usually-crowded Platform 9 ¾ at neighboring King’s Cross Station. (Also, the exterior of St. Pancras is featured in the flying car scene of Harry Potter and the Chamber of Secrets, so young wizards and witches will have fun with that stop.)

We had considered other day trips from London, including Stonehenge and Oxford, but I’m so glad we chose Dover. It was exactly the adventure our family needed to finish out a wonderful trip to the U.K. 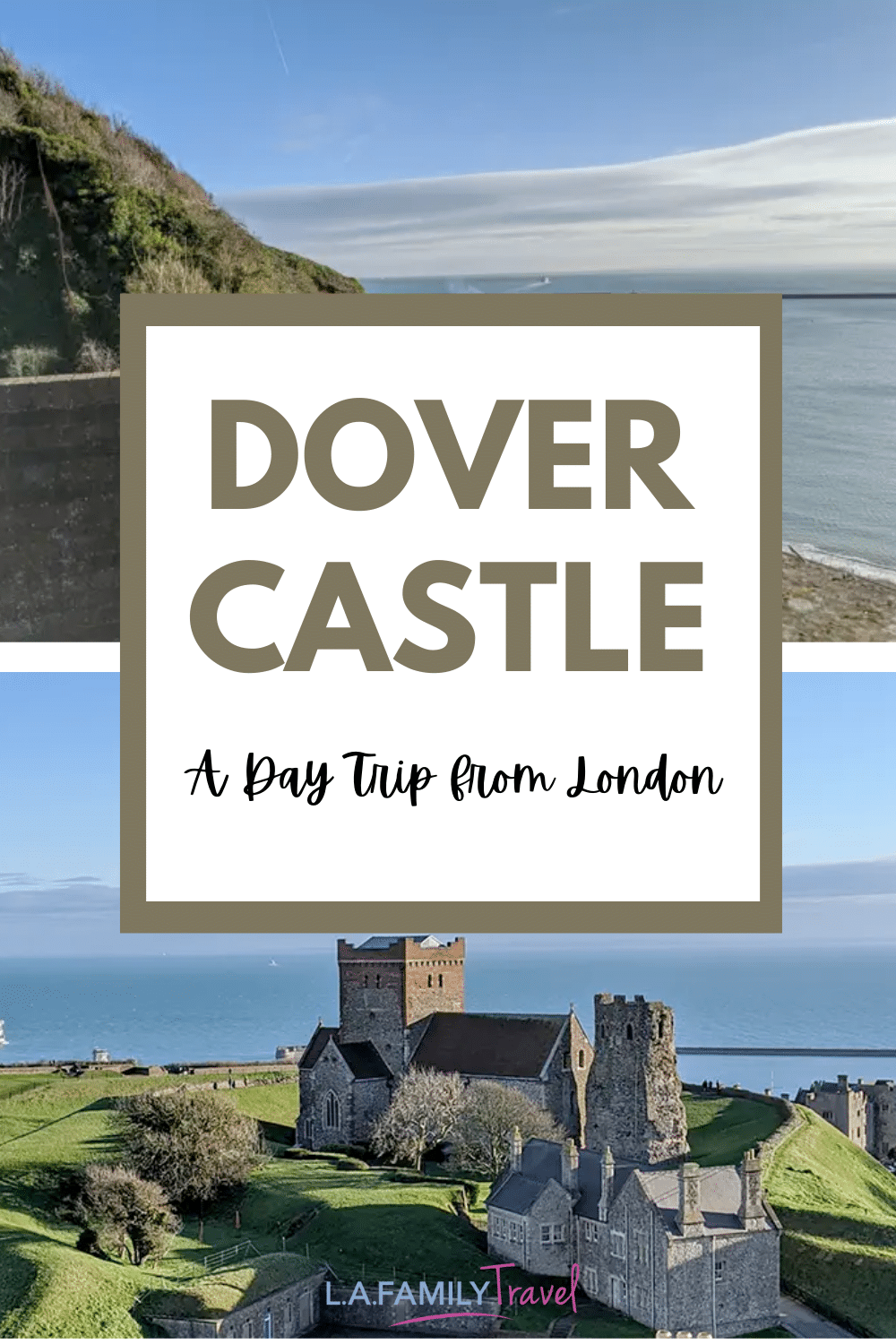