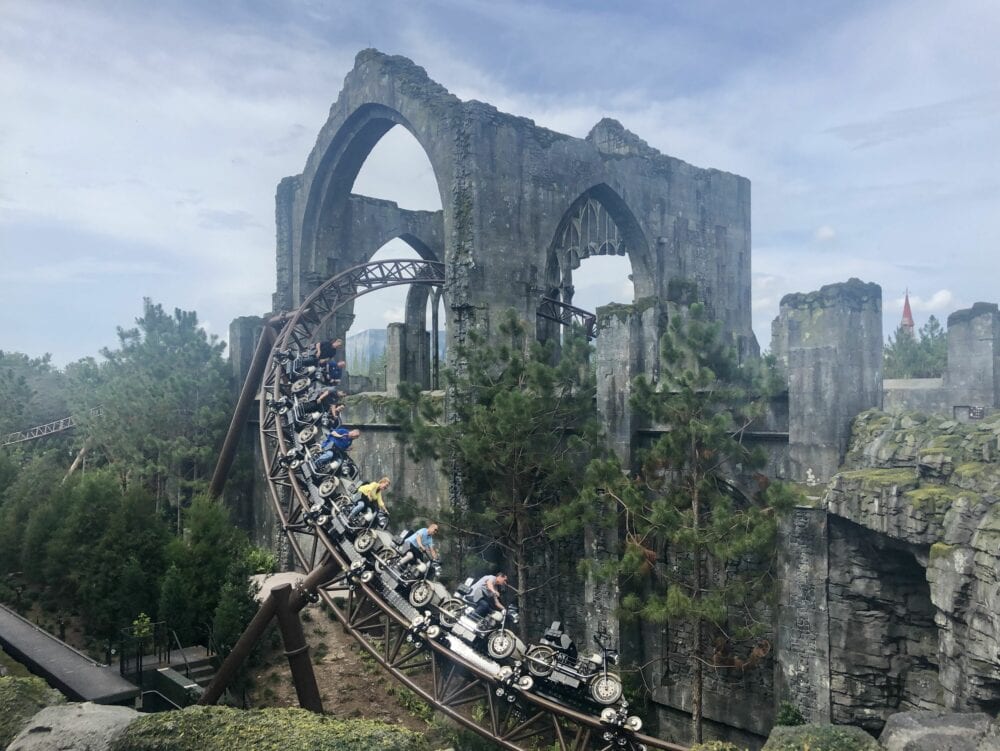 Universal Orlando’s perfectly named new coaster is definitely both magical and an adventure.

When the Wizarding World of Harry Potter first opened in 2010 at Universal’s Islands of Adventure Park, a visit to Universal Orlando Resort immediately moved to the top of every Harry Potter fan’s bucket list (mine included).

The chance to step into the magical world from the Harry Potter stories and literally walk in the footsteps of Harry and his friends was a dream come true, and the Wizarding World of Harry Potter – Hogsmeade checked every box of “must-do” wizarding experiences, including: drink a frosty butterbeer, “fly” on a broomstick, and explore the halls of Hogwarts School of Witchcraft and Wizardry. 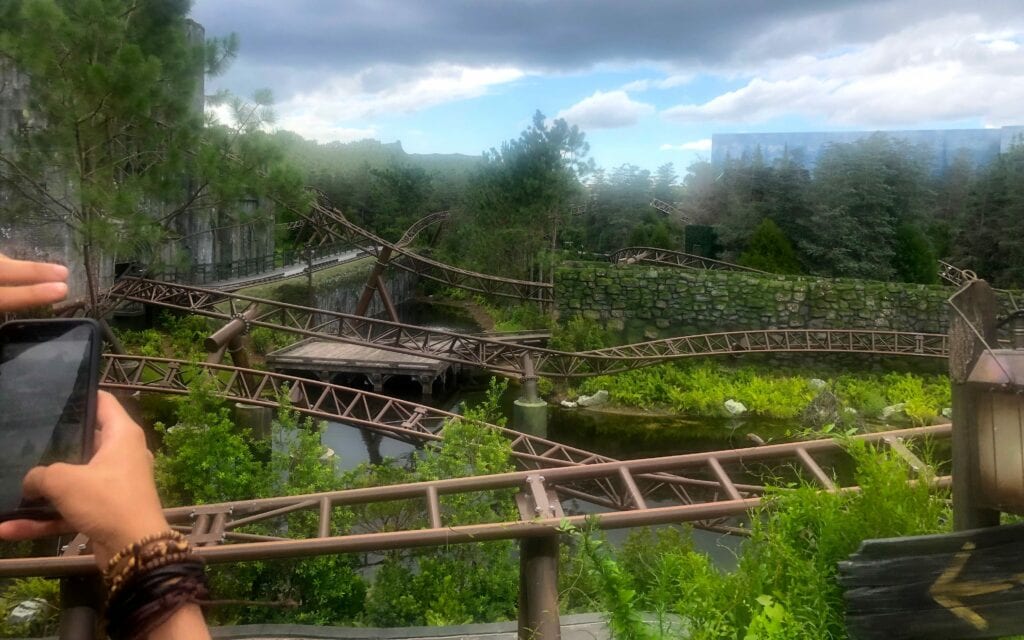 Riders fly through a real forest with over 1,100 trees. © Kia Khazani

Contents hide
1 But First! The Wizarding World of Harry Potter
2 Handling That Ride Line
3 The Coaster
4 Bike or Sidecar?
5 What Did The Kids Think? 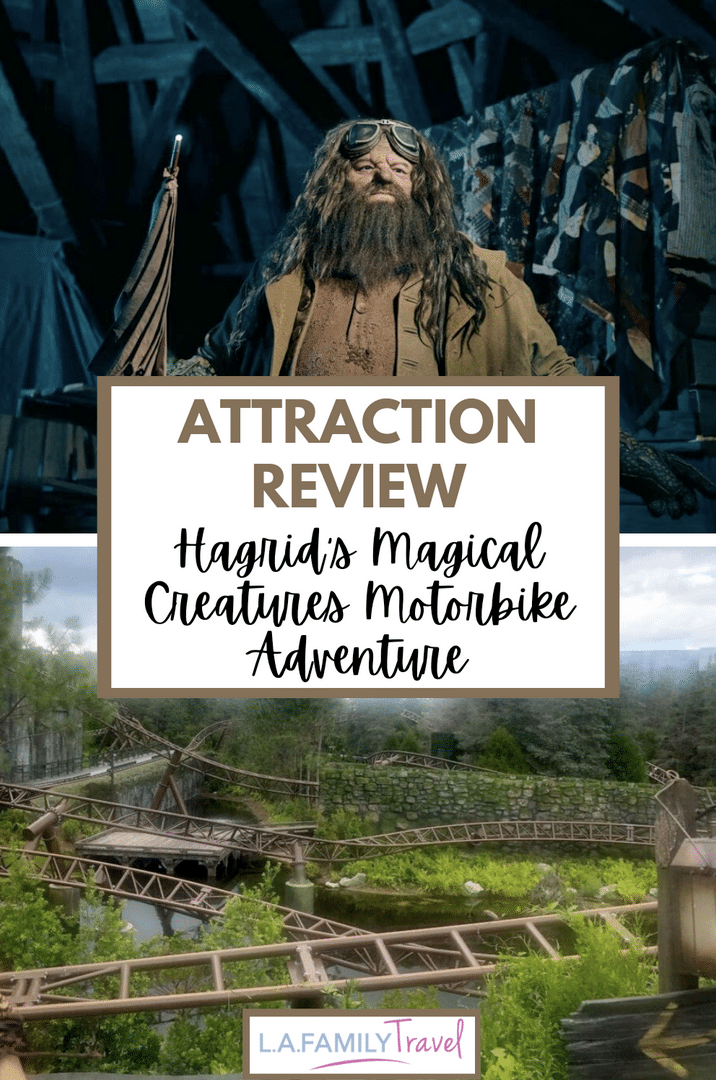 But First! The Wizarding World of Harry Potter

In 2014, Universal Orlando added The Wizarding World of Harry Potter – Diagon Alley and the Hogwarts Express, allowing families to walk through the walls on Platform 9 ¾, see a fire-breathing dragon, come face-to-face with the evil Lord Voldemort, and even do a little magic themselves with the help of interactive wands. Well, now, there’s a brand new experience that may just be the most magical of all: Hagrid’s Magical Creatures Motorbike Adventure is a “story coaster” that takes park guests on a wild ride through the Forbidden Forest, an area strictly off-limits to Hogwarts students.

I’m sure there are witches and wizards who wish there was a spell to magically whisk them to the front of the queue – which on opening day stretched to an astounding 10-hour wait – but this Muggle assures you that the queue is just as magical as the ride itself, which is exactly why Universal Creative calls it a story coaster.

Walking through the queue is not separate from the ride. It’s all one journey,” says Alan Gilmore, Art Director for the Harry Potter films and The Wizarding World of Harry Potter. “Every time I do [a Harry Potter attraction], I push harder to do that, and this time I think we achieved it. 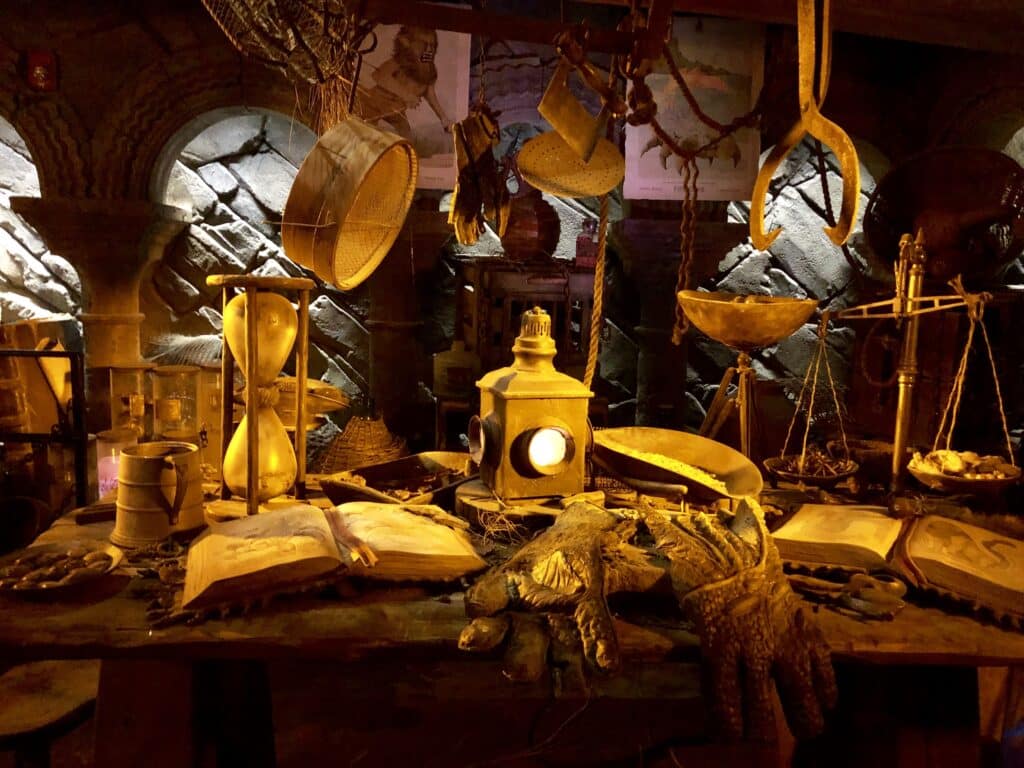 Warwick Davis, the actor who played both Professor Flitwick and the goblin Griphook from Gringotts Bank in the Harry Potter films agrees. “Walking through the queue and experiencing the immersing nature of the place sets it apart from many other rollercoasters,” he says.

Gilmore also explained to me that Hogsmeade and the Forbidden Forest are supposed to be very far apart, so the first thing the creative team had to do was come up with a way to make the “journey” from the ride entrance in Hogsmeade to the ruins in the Forbidden Forest feel like it crossed many miles, which is why the path meanders. But, most importantly, it’s during the queue experience that we discover Hagrid, the school’s groundskeeper and, at one point in the stories, the Care of Magical Creatures professor, has set up secret workshops inside abandoned ruins to collect and study magical creatures.  Who knew? The coolest part is that these mysterious ruins have never appeared before in the books or movies because they were created just for the ride. 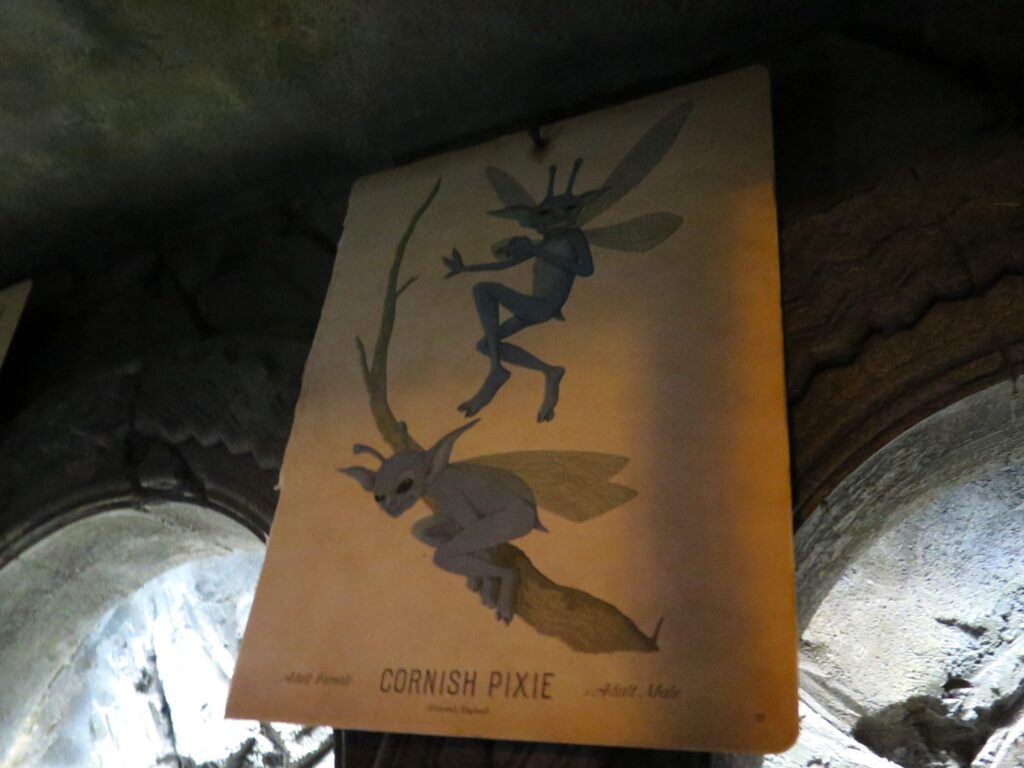 Drawings of magical creatures can be seen in Hagrid’s secret workshops. © Samantha Davis-Friedman

We gathered details from [Scotland, England, and Ireland] to create our own special place and invented our own medieval ruins – something even older than Hogwarts,” Gilmore told me. “You don’t know what it is, but it definitely has a backstory about Hagrid and the students. This is where they come to learn with him. 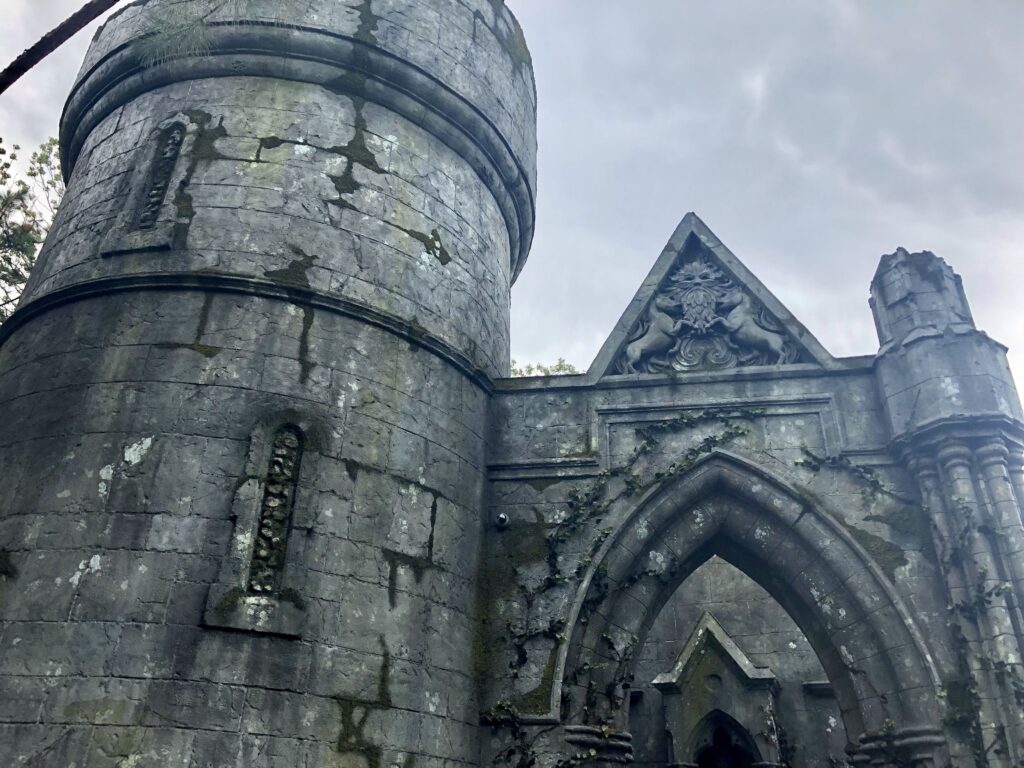 The ruins themselves have a few details that observant Harry Potter fans might notice like a statue at the entrance depicting Grindylows, the water demons Harry encountered in the Black Lake during the Triwizard Tournament in “Harry Potter and the Goblet of Fire.” There are also many appearances by the “green man,” a face surrounded by leaves that Gilmore told me is a symbol of nature. 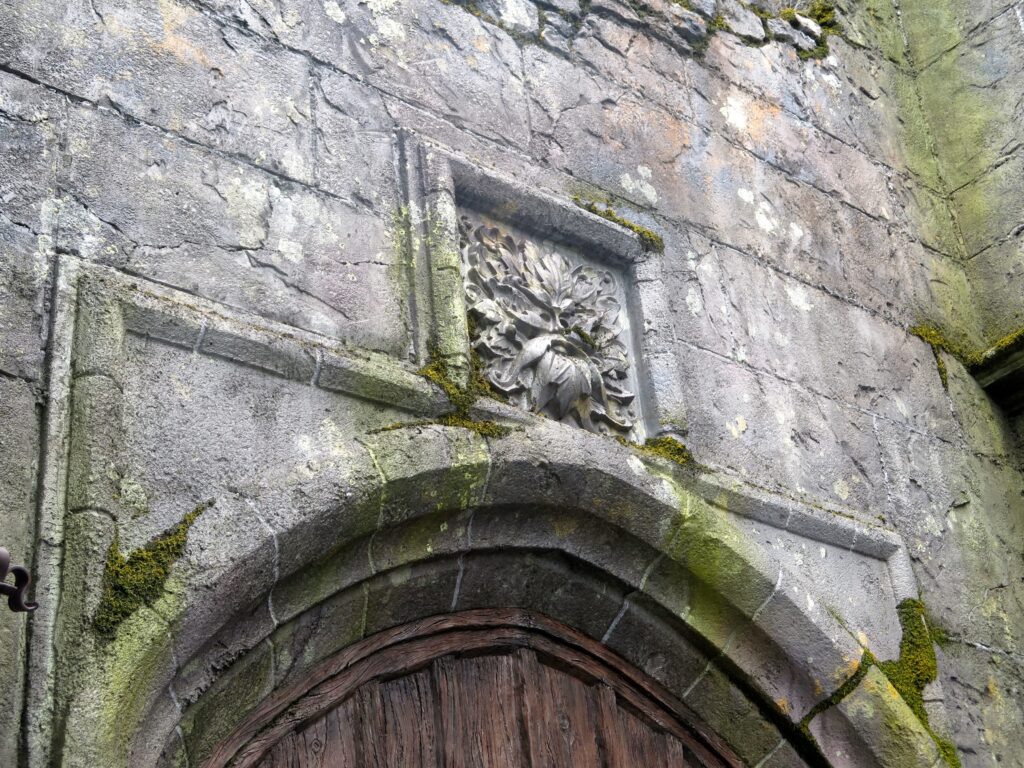 The green man, a symbol of nature, appears throughout the queue. © Samantha Davis-Friedman

“[In the films], the green man first appeared in Dumbledore’s office – not many people know that – and there are also several on the lovely old rickety wooden bridge to Hogwarts,” He said. “We don’t want people to know about these things straight away – you have to find your journey; you have to find these details. We want people to ask ‘What is that and what does it represent?’ It‘s taking the whole idea of a theme park and taking it further to an education.”

Education is definitely a major component of both the queue and the ride. In addition to the things that will make kids ask, “What is that and what does it represent?” Gilmore also incorporated some straight-up educational features. I particularly like illustrations of magical creatures from the wizarding world, including some that kids will actually encounter during their ride, like Cornish Pixies and Blast-Ended Skrewts (creatures that have never been seen outside the pages of the books). The ride also takes place during a Care of Magical Creatures class, and while Hagrid’s magic is a bit spotty at best and the class doesn’t go as planned, he still manages to teach us about the creatures we see. 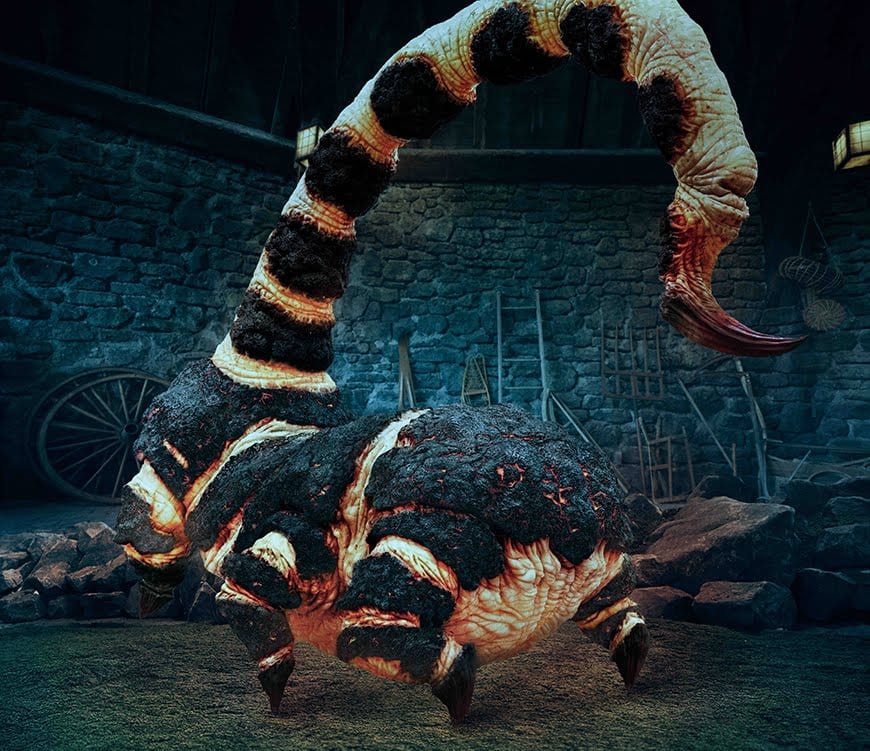 Riders will encounter the Blast-Ended Skrewt, a magical creature that has previously only appeared in the Harry Potter books. © Universal Orlando Resort

Along with innovative storytelling, Hagrid’s Magical Creatures Motorbike Adventure also employs innovative coaster technology – and breaks a few records as well. The ride is now the longest in Florida (at nearly a mile in length) and has seven launches (the most in the world). It also features a first-of-its-kind free-fall vertical drop of nearly 17 feet – a surprising way to escape the clutches of menacing Devil’s Snare. The 50mph action-packed ride – both forwards and backward – won’t disappoint thrill-seekers, but because it doesn’t have big drops or inversions, anyone who skips coasters because of those is in luck. And if that’s not enough, Hagrid himself is Universal’s most life-like animated figure yet. 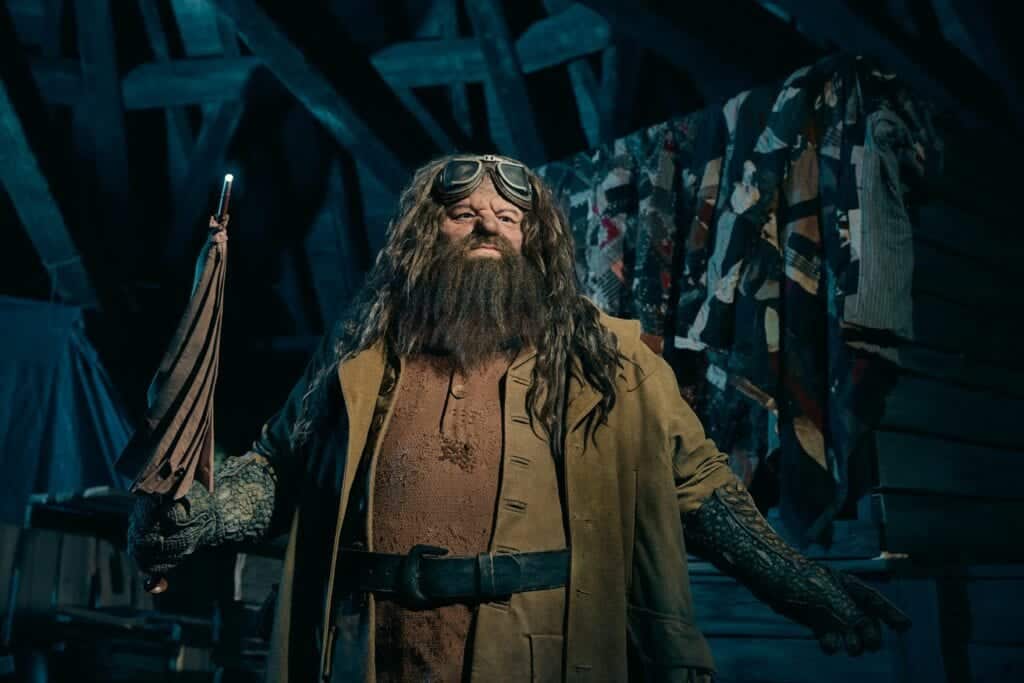 Will the real Hagrid please stand up? © Universal Orlando Resort

Fun Facts: Robbie Coltrane, the actor who played Hagrid in the movies, recorded a custom script for the ride. Plus, the figure is 7 feet 6 inches tall (exactly proportional to Hagrid in the Harry Potter films) and his costume was designed by the same team that created Coltrane’s on-screen wardrobe.

“Hagrid is such an iconic character and an integral part of the Harry Potter franchise, so we were excited to develop a truly innovative and authentic animated figure to bring him to life for this experience,” said Thierry Coup, Senior Vice President of Universal Creative. “We worked tirelessly to make sure Hagrid’s full essence was captured with the utmost attention to detail for our guests to feel completely immersed in this all-new adventure.”

For me, one of the most unique features of Hagrid’s Magical Creatures Motorbike Adventure is that you have a choice of riding on the motorbike like Hagrid or sitting in the sidecar like Harry. Each gives a different ride experience, so I definitely recommend trying both. I personally preferred the sidecar, which sits lower to the tracks and hugs the curves. The motorbike is elevated a bit, which provides a more hair-raising ride (especially if you’re lucky enough to get the front row like I did), and definitely gives the feeling of flying through the trees.  Plus, only motorbike riders get to push a purple button on Hagrid’s command to kick into a higher gear. 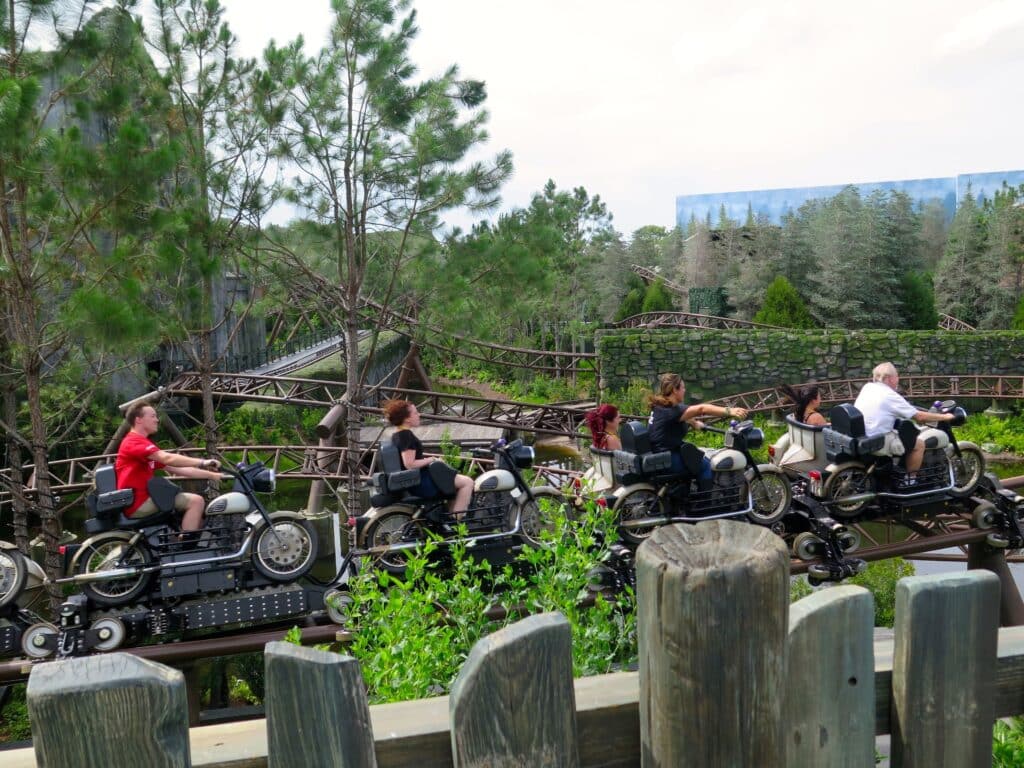 “I think the ride will really fire kids’ imaginations,” Gilmore said. “I spent my childhood climbing trees and exploring forests and old buildings. I want kids nowadays to get that sense of escape.”

What Did The Kids Think?

As any parent knows, that’s a tall order because kids nowadays can be pretty hard to impress (especially tweens and teens), but a few hard-to-impress L.A. teens I know were lucky enough to ride opening weekend and were very generous with their praise: 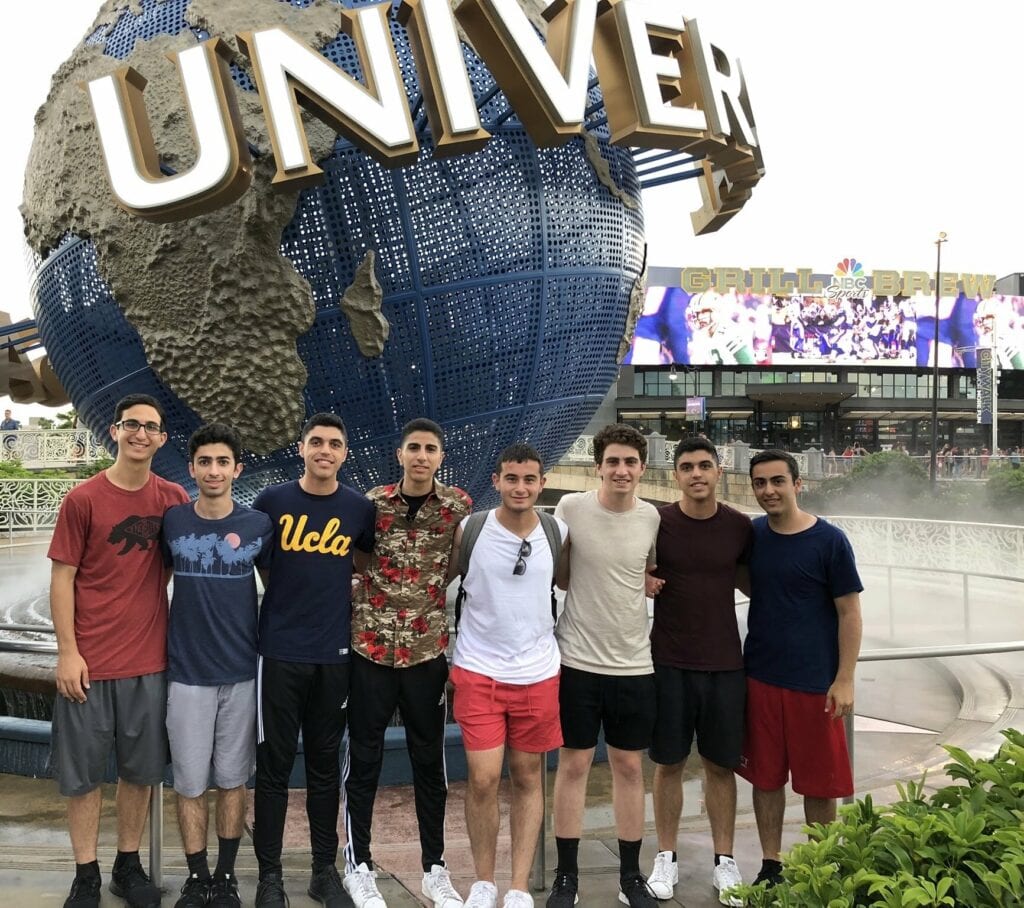 According to Mark Woodbury, President of Universal Creative, there are three key ingredients in a great attraction: a great environment, wonderful characters that have great stories to tell, and the stories themselves. As far as I’m concerned, this attraction has it all, and like Ethan, it’s definitely my new favorite magical experience – at least until the next Wizarding World attraction opens. 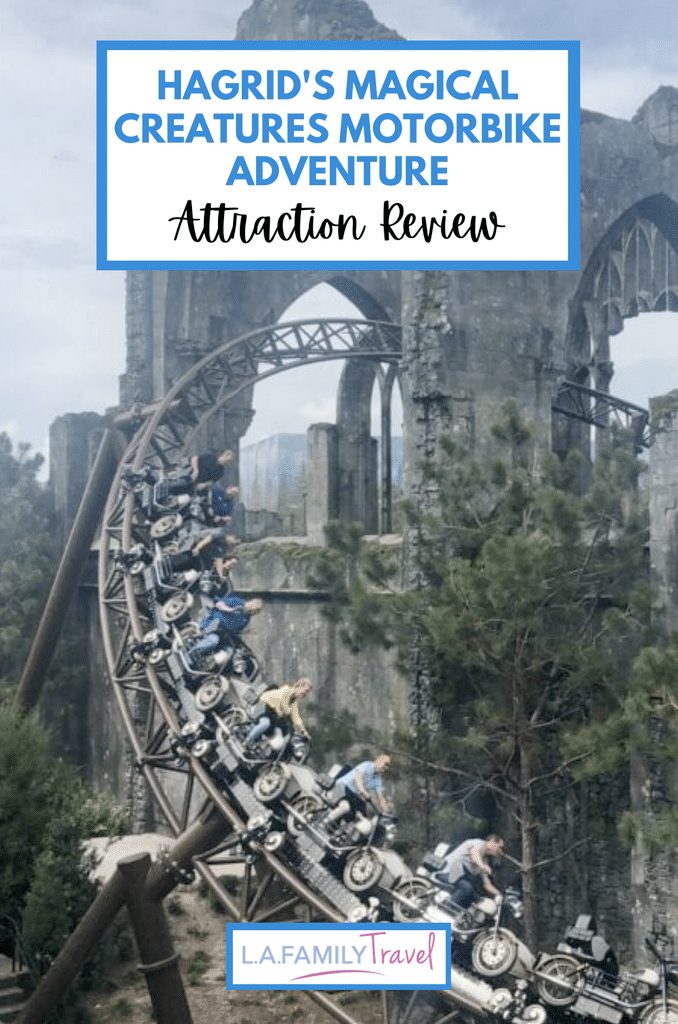