Hop On – Hop Off Bus Tours: An Affordable Way to Travel with Kids 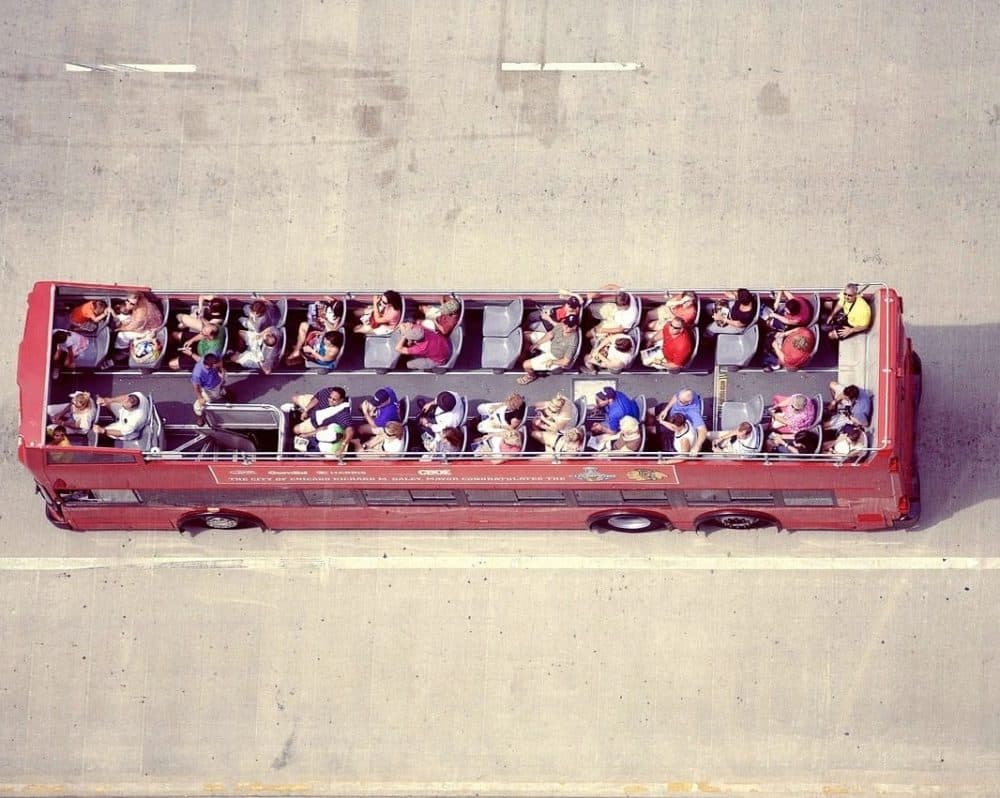 I’ve spent a good deal of time on the top of a double-decker bus – and not just in London where that sort of thing is expected. In quite a few different cities, double-decker bus tours have allowed my family to see the sights, get around town, take advantage of unexpected opportunities, and make vacation memories.

A “Hop-On, Hop-Off” bus – meaning you can get on and off as many times as you want with a valid ticket – is absolutely my family’s favorite first activity in any new destination since the bus route usually circles the entire city with stops at (or very close to) most major sights. Because of that, riding the full loop on the first day not only gives us the lay of the land, but also provides a list of “must-do” sights to return to. And, as any parent knows, when kids can ride instead of walk, it’s one less thing for them to gripe about. 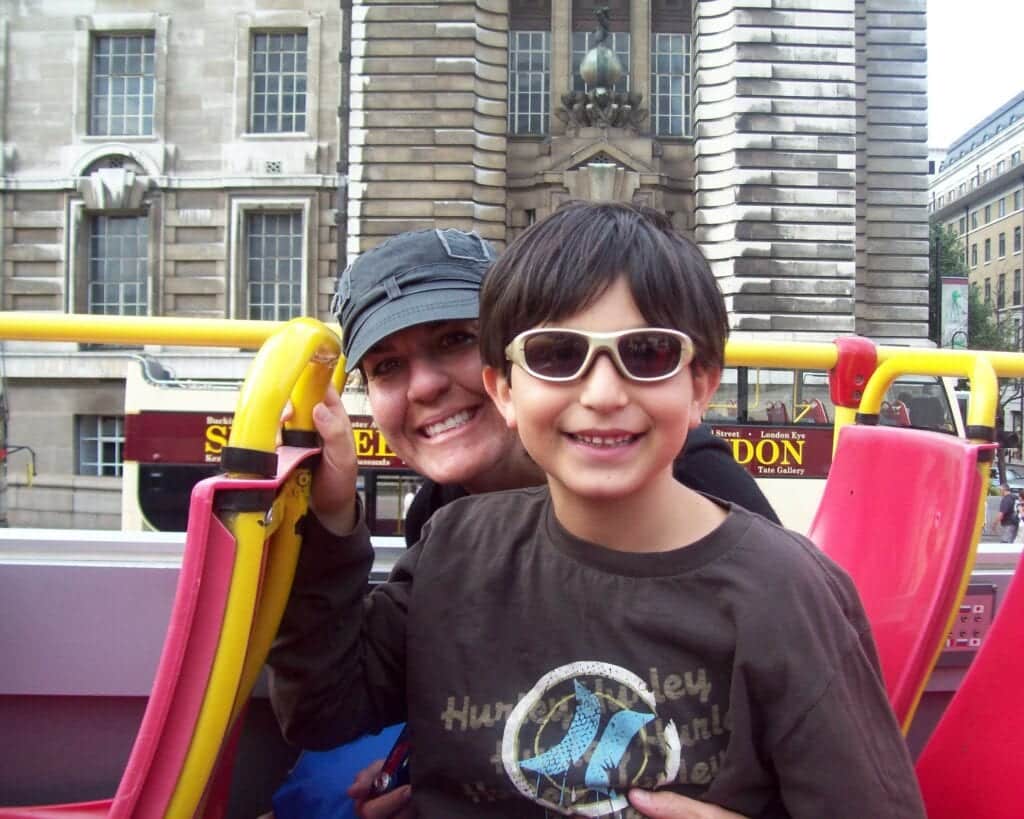 “Hop-on, Hop-off tours are a simple and smart solution for family travel,” says Vinay Gupta, managing director at isango! “Rather than dragging weary (and grumpy) children from attraction to attraction, younger travelers can enjoy the thrill of seeing all the sights aboard an open-top double-decker bus.” 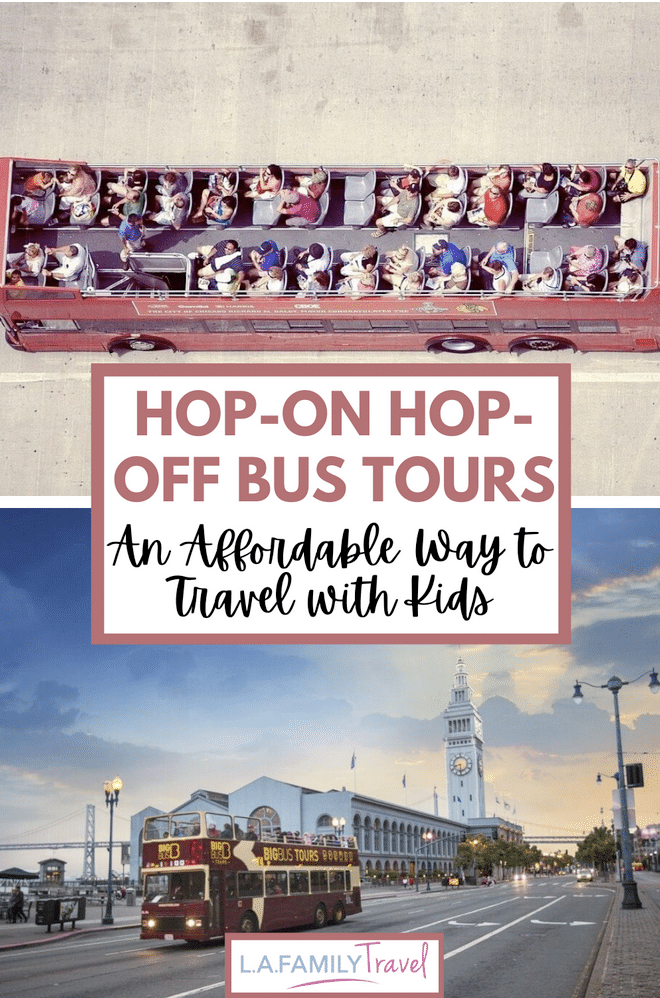 Meredith Wallace, a travel advisor with MM Travel (and the mom of teens) says that she often books Hop-on, Hop-off buses for her clients who list sightseeing as a top priority on their trip because they aren’t just a good way to get from point A to point B, but because they always go to the popular tourist attractions, which eliminates the hassle of trying to figure out how to get to them. She also notes that the guides are always entertaining as well as informative, which is a definite plus when traveling with hard-to-please teens – and who knows, they might even accidentally learn something. We’ve found that, in addition to being entertaining, guides are often great resources for off the beaten path sights, restaurants, and activities that most tourists don’t even know about. 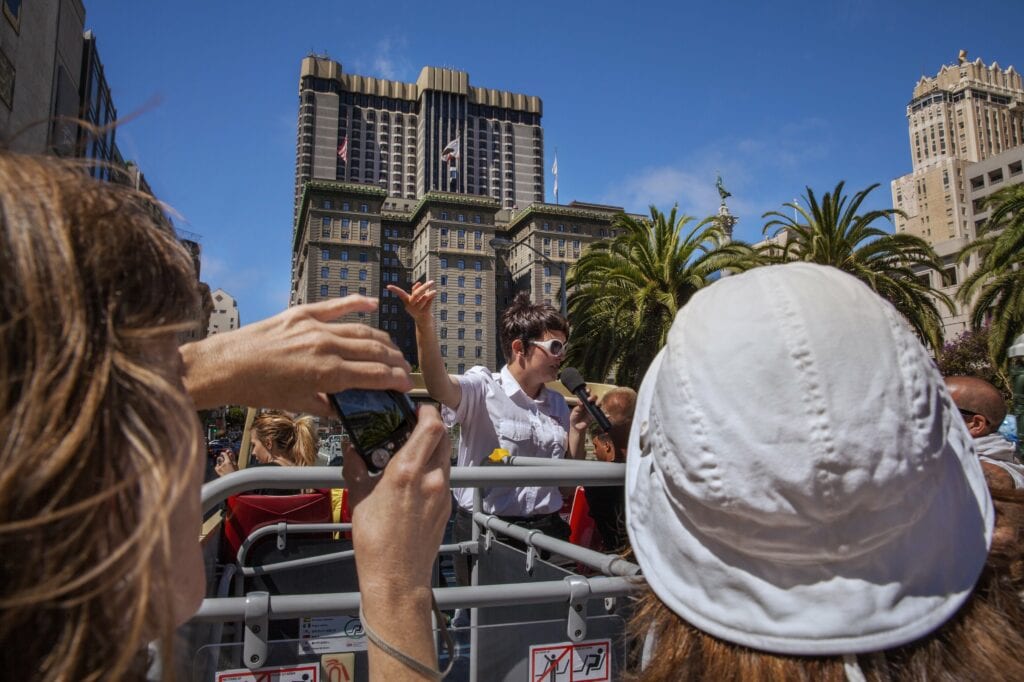 PRO TIP:  Meredith suggests choosing a hotel that’s located close to a Hop-on, Hop-off stop. That way, you can step out the front door and right onto the bus.

Adrienne Jarrell, a travel advisor with Avoya Travel (and also a mom of teens), agrees. “I think a Hop-on, Hop-off bus tour gives travelers the most bang for their buck. I personally like them because they give you a feel for the city, especially if it’s one you don’t know very well or haven’t been to before.” 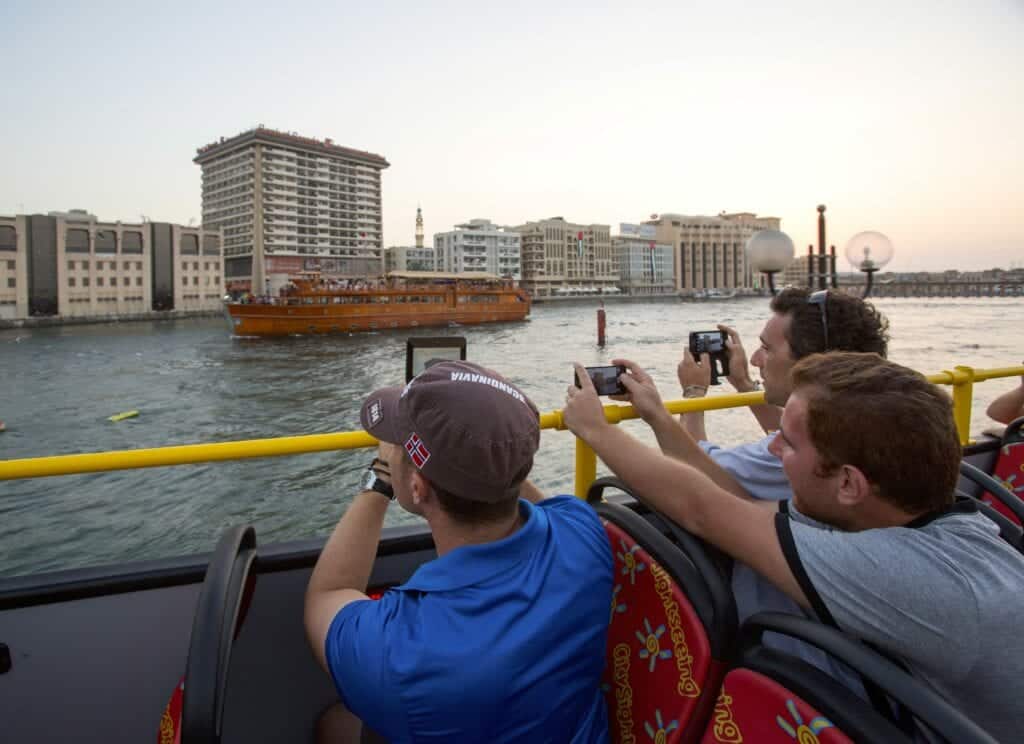 Jennifer Nagle, Executive Vice President, Independence Visitor Center Corporation agrees that Hop-on, Hop-off buses are a great way to experience everything Philly has to offer. “There is plenty to explore…in any given area of [Philadelphia’s] downtown, from the Liberty Bell to the Rocky Steps,” she says. “But taking a Hop-on, Hop-off tour brings your exploring to new heights.”

A “Hop-On, Hop-Off” Big Bus Tour is a family’s best way to get to know a city. It’s fun, insightful, and should be a part of your next trip with kids!

An added bonus of Hop-on Hop-off buses is that tickets are often valid for more than one day (or if not, there’s usually a discount for purchasing multi-day tickets), and some tours even offer money-saving family tickets. 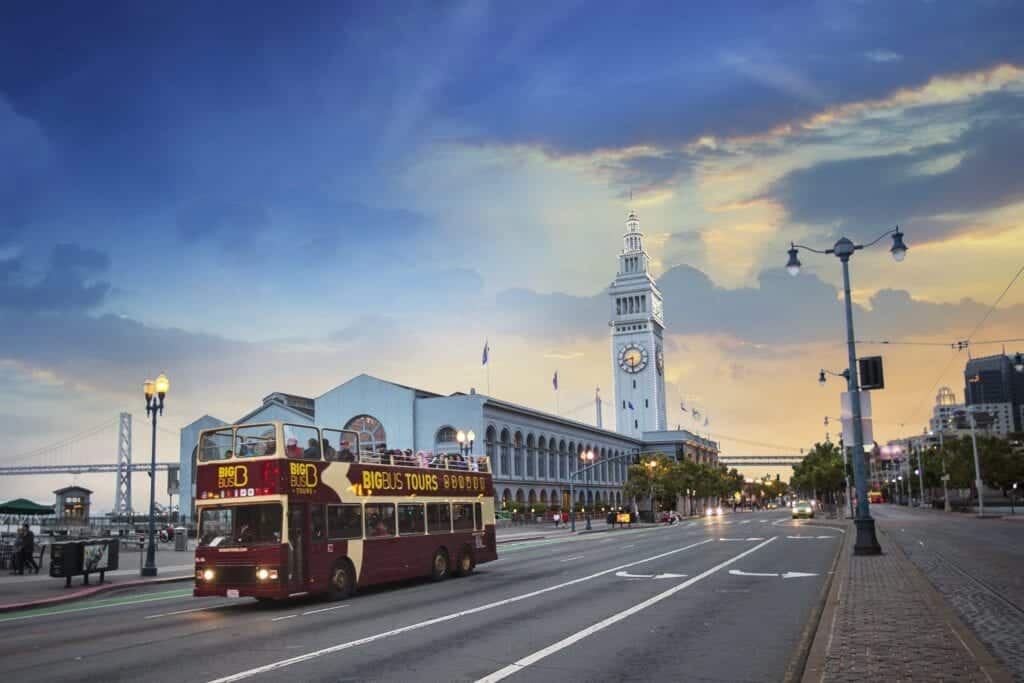 Hop-on, Hop-off is an easy way for families to see all the sights and attractions – © Big Bus Tours San Francisco

My family always tries to maximize that perk by hopping on as early as possible in the morning of the first day we activate our tickets, so we can use the bus to get around the city until the end of the last day the ticket is valid. This eliminates the need to pay for a taxi or uber and allows us to see the city from above rather than being underground in a subway. In a city like San Francisco, which is extremely hilly in some areas, the bus offers the luxury of riding up and down the city’s famous hills instead of walking them.

“Hop-on, Hop-off tours take visitors beyond the main tourist areas and introduce them to a wide variety of San Francisco’s neighborhoods in a relatively brief time, with the option of hopping off to explore further,” says Laurie Armstrong Gossy, Senior Director, Media Relations for San Francisco Travel.

She also notes that crossing The Golden Gate Bridge on an open-top bus – one of the most famous and beautiful bridges in the world – allows visitors to immerse themselves in the iconic experience instead of worrying about traffic and driving. Plus, she says, “You can’t help but get great photos, no matter what direction you point the camera.”

Don’t Miss Family Trip To San Francisco On The Cheap

Nicole Ritthaler, visitor center manager for Big Bus Tours San Francisco agrees. “Hop-on, Hop-off is an easy way for families to travel with kids to all the sights and attractions in our city,” she says. “Seeing your child’s excitement of going over the Golden Gate Bridge on the top of a double-decker is an amazing feeling.”

My family also makes the most of our multi-day tickets by planning our vacation itinerary around the bus. For example, if we know we are going to want to take a day trip outside the city or book a full-day activity, we don’t activate our bus tickets if we can’t use them the whole day. Because of that, we usually set aside the first couple of days of a trip to see the sights on the bus route, and then plan to do activities out of the city center – or visit sights that take longer – after our tickets have expired. 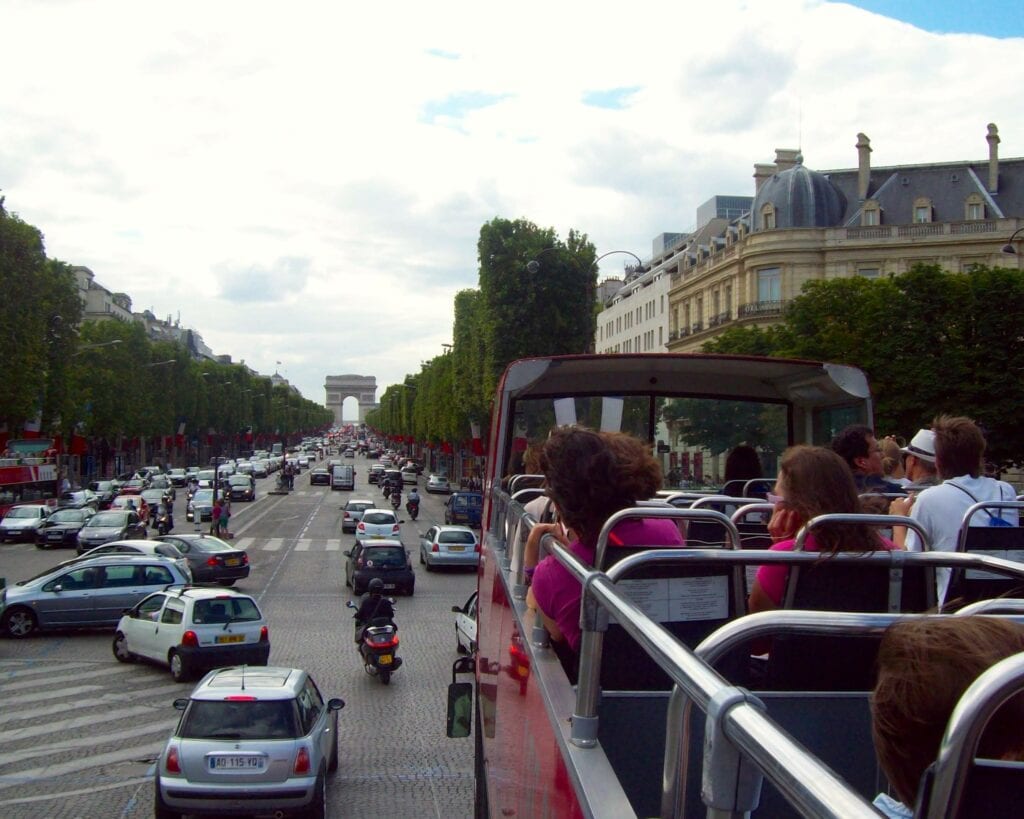 “The Big Bus Philadelphia’s open-top buses run year-round (weather-permitting) and offer spectacular views as you ride around the city,” Nagle says. “Big Bus also gives you the flexibility to hop on and off to explore the areas you hear about on the tour on your own.”

Exploring on your own is definitely great, but one of the other things I love about Hop-on, Hop-off buses is that many companies offer additional walking, boat, or even nighttime “city-lights” tours at no additional cost (or at considerable savings), so that’s a great money-saving benefit. In our case, some of those unexpected “add-ons” have ended up being our favorite activities.

One example was a walking tour in London to see the changing of the guard. Our guide was super savvy and took us to a little-known spot at the side of Buckingham Palace to see the guards preparing for the official procession. We were literally the only people there, and my sons got to see everything right up close. We were also able to snap some awesome photos. 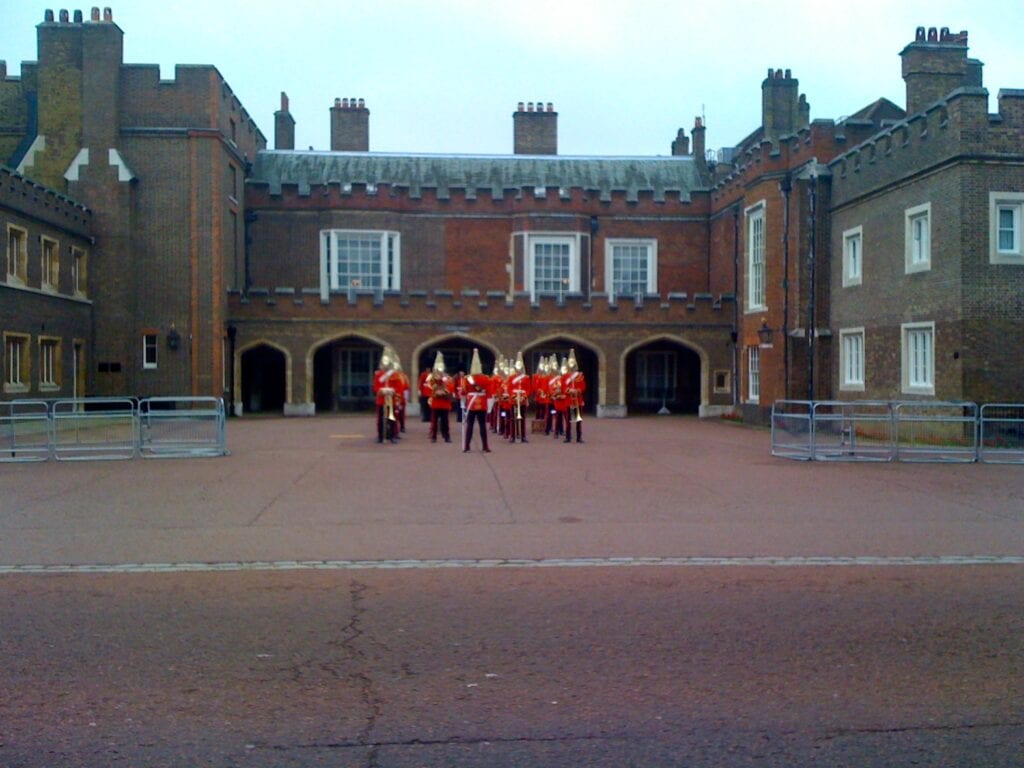 When my family uses the Hop-on, Hop-off bus, I love that we end up doing some things that we would not have done if they were not included with our passes,” Meredith says. “They often end up being a great addition to our trip.

The goal of any family vacation is to share experiences and make memories, and Hop-on Hop-off tours have definitely created some great memories for my family. 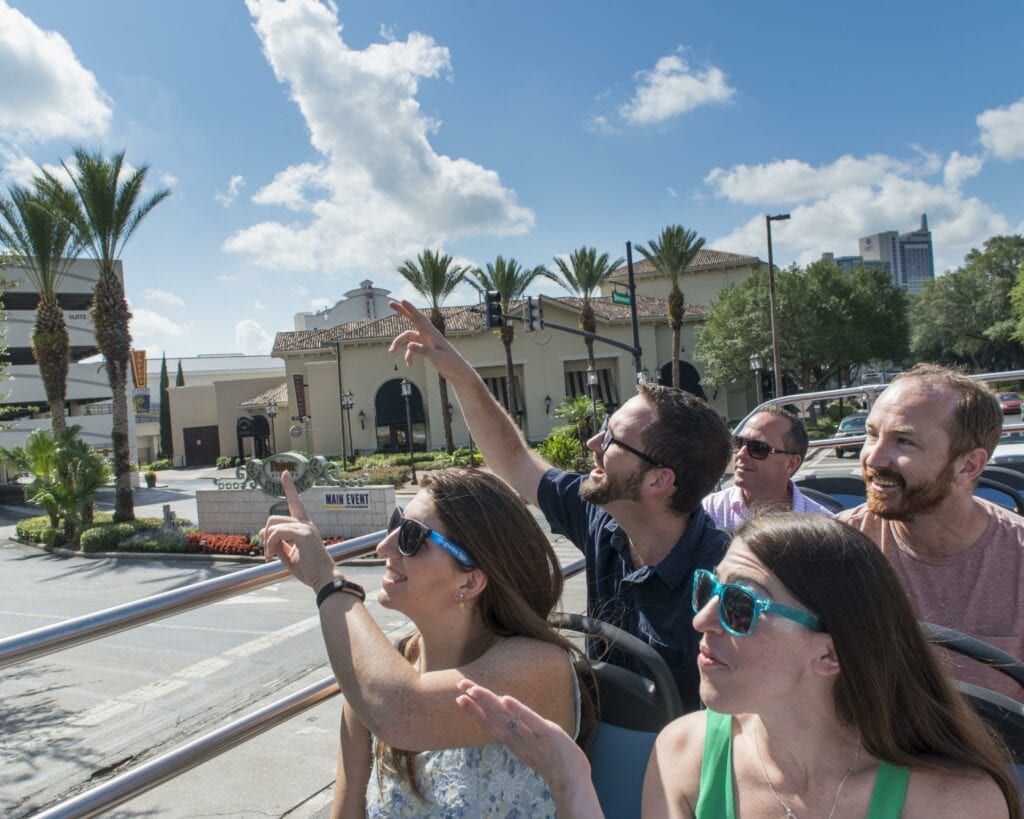 Though not necessarily my proudest parenting moment, one such occasion was on a bus tour of New Orleans. As we passed a very popular brunch spot, the guide explained that brunch is a big deal in the Big Easy and then said, “After all, you can’t drink all day if you don’t start in the morning,” at which point, my son looked at me and loudly said, “That’s totally you!” He said it because I’d just had a Mimosa at breakfast that morning, but nobody else on the bus knew that! Needless to say, that quote has not only become a funny vacation memory but has also become a saying at every family brunch since.

Adrienne’s family also has a memorable bus-related tale: “We were in Ottawa and it was beautiful out. The double-decker bus was full and we thought we scored by getting seats together on the top,” she says. “That was until all of a sudden it started pouring rain, and we couldn’t move. It is a funny story now, and definitely memorable!” 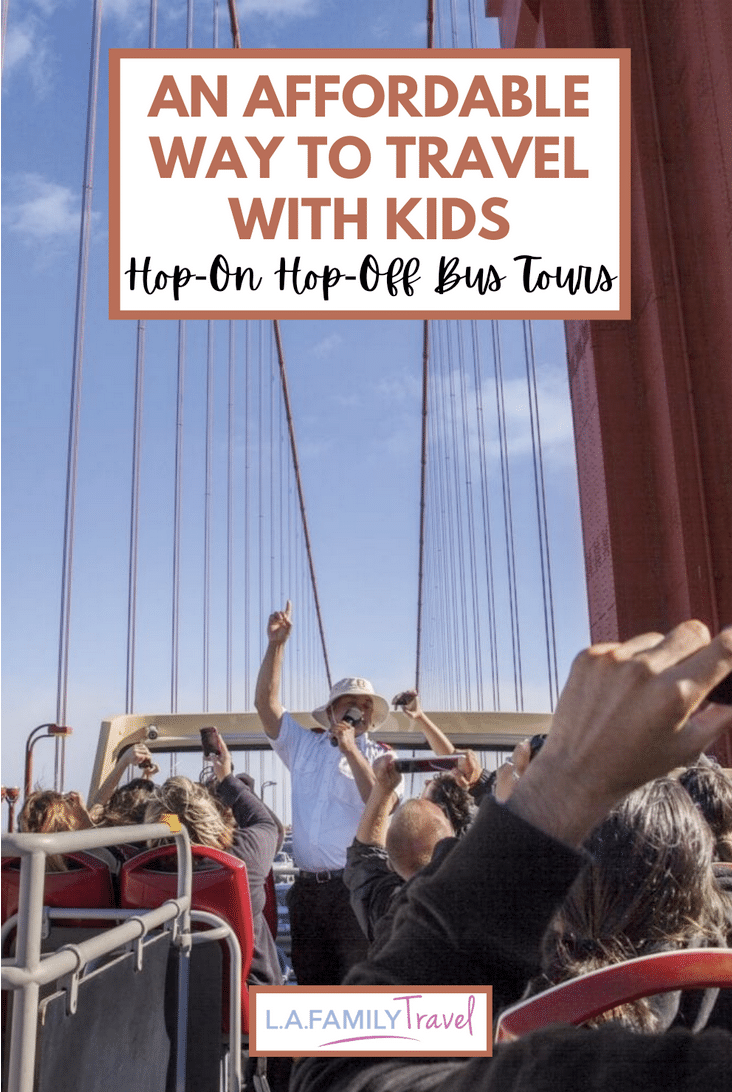