Family Trip To San Francisco On The Cheap 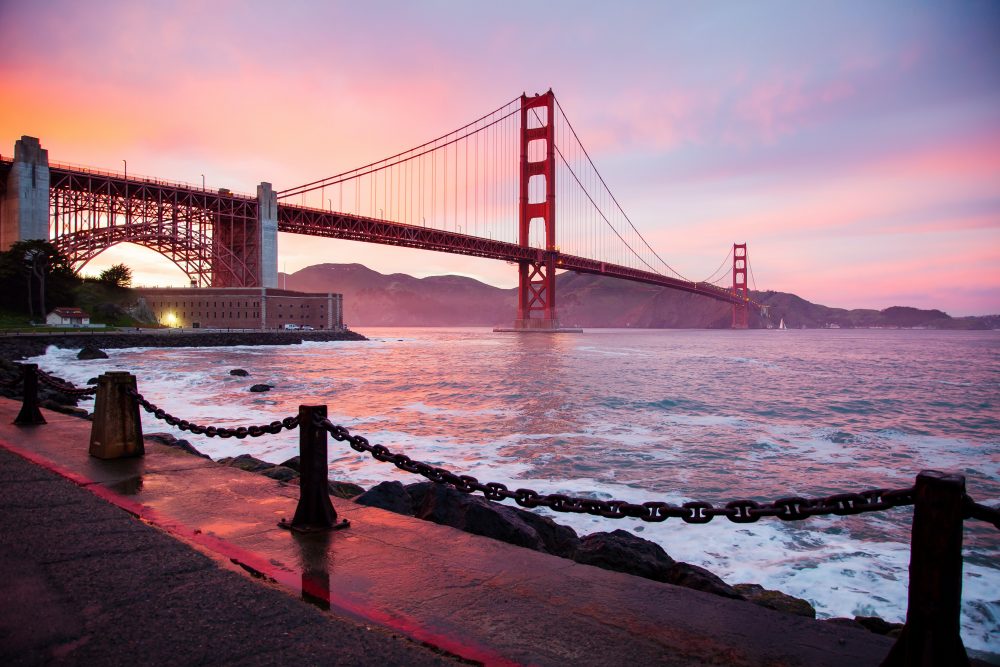 Notorious for its high cost of living, San Francisco, in Northern California, is an unlikely destination for families looking for a cheap family vacation. Nevertheless, some of the best things our city has to offer can be done for less than $10 per person, and even more can be done at no cost at all! Many of the items on this list are things our family wishes we’d known about when we first moved to the City. That’s why we’ve decided to put together our list of the top 10 best things to do with your family in San Francisco while sticking to a budget.

NO TIME TO ENJOY THIS ARTICLE NOW? PIN IT OR BOOKMARK FOR LATER! Nothing is more quintessentially San Francisco than riding a cable car, which is why it tops our list of fun things to do in San Francisco on a budget. From the distinctive old-timey interiors to the clanging bell and friendly conductors, it’s undeniably a great way and one of the funnest ways to get around the City by the Bay on public transportation. The cost of a one-way ticket is $8 per person, so this probably won’t be your main form of transportation. On the other hand, you can reach most of the other stops on our list by hopping on these historic vehicles, and catch some amazing views of the City while you’re at it. 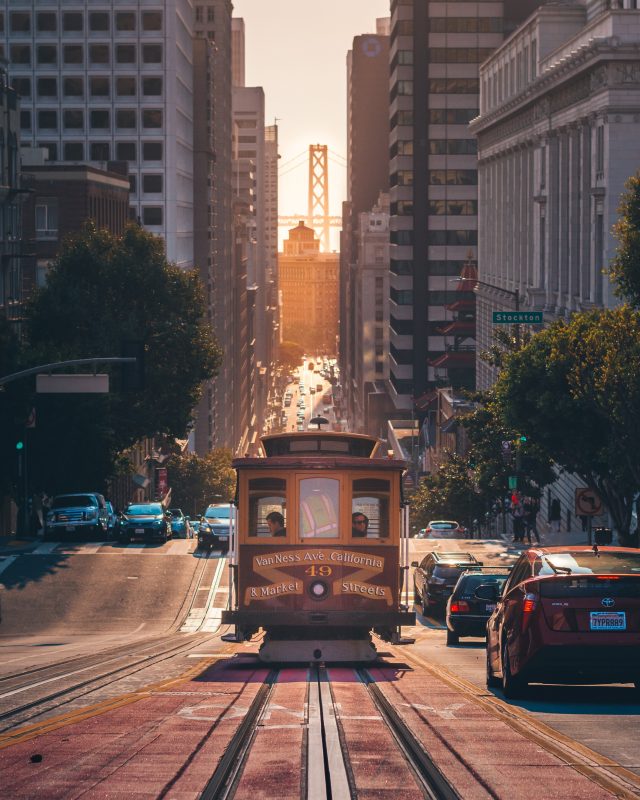 Who says vacations can’t be educational? After taking your kids on a cable car ride, the Cable Car Museum is a great place to teach kids of all ages a little bit about the history of these vehicles of the past. Located on Washington and Mason in Nob Hill, the San Francisco Cable Car Museum is the place to go to learn about the heritage of one of San Francisco’s most iconic images. Admission is free to the public and the museum is located right on the Hyde-Powell cable car route, making it easy to hop off and on again when you’ve finished. 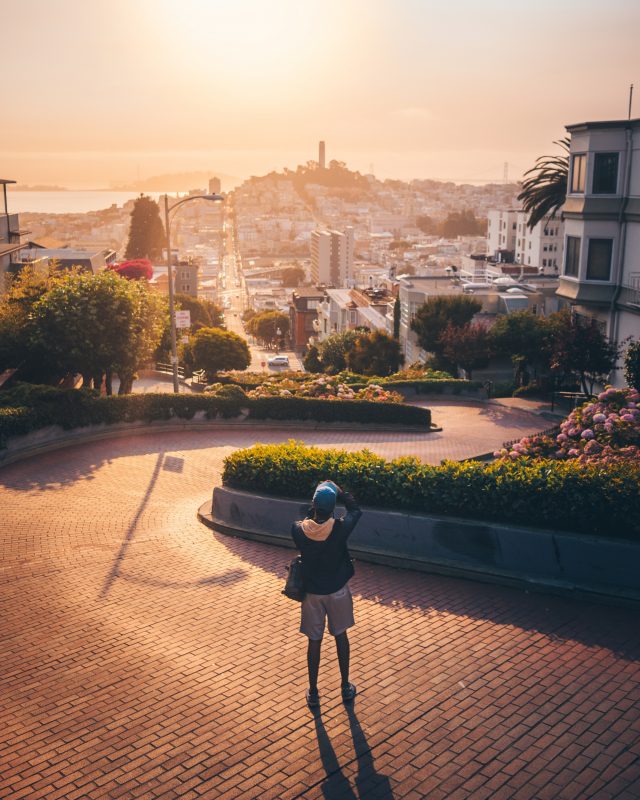 If you take the Hyde-Powell cable car route, make sure to jump off at San Francisco’s crookedest street for a photo op and some sightseeing. On a clear day it’s the best place to catch beautiful views of Coit Tower and the North Beach neighborhood below, as well as Alcatraz Island in the center of the San Francisco Bay. Down for some lunch afterwards? Just a few blocks east is the start to San Francisco’s Little Italy and Chinatown neighborhoods; both of which have plenty of excellent restaurants to satisfy any craving. 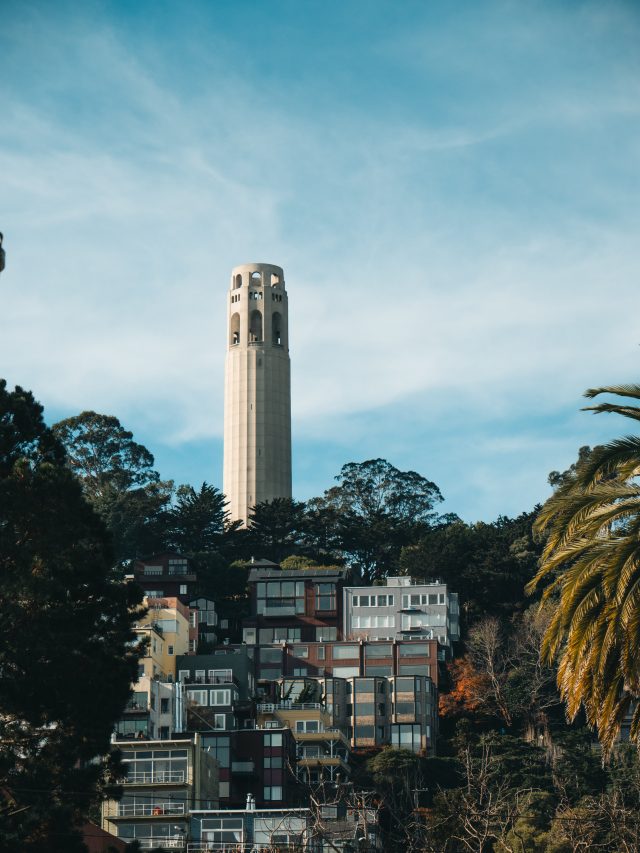 It’s a bird! It’s a plane! It’s…a flock of parrots? Photo by Ronan Furuta on Unsplash

Yes, you read that right, there are actually wild parrots living near San Francisco’s Coit Tower. They travel in flocks around the City and are particularly noticeable in the mornings. To get up to this historic landmark, you’ll need to do a little climbing, as it’s situated at the top of Telegraph Hill overlooking the North Beach neighborhood. Tickets to the observation deck at the top are $3 for kids over the age of five. Anyone younger rides for free. While you wait in line, your kids can enjoy the exquisite murals depicting San Francisco’s history.

Pro Tip: Don’t forget to stop for a cannoli in Little Italy as a reward for climbing to the top of Telegraph Hill! It’s just a couple blocks away and really worth the walk. 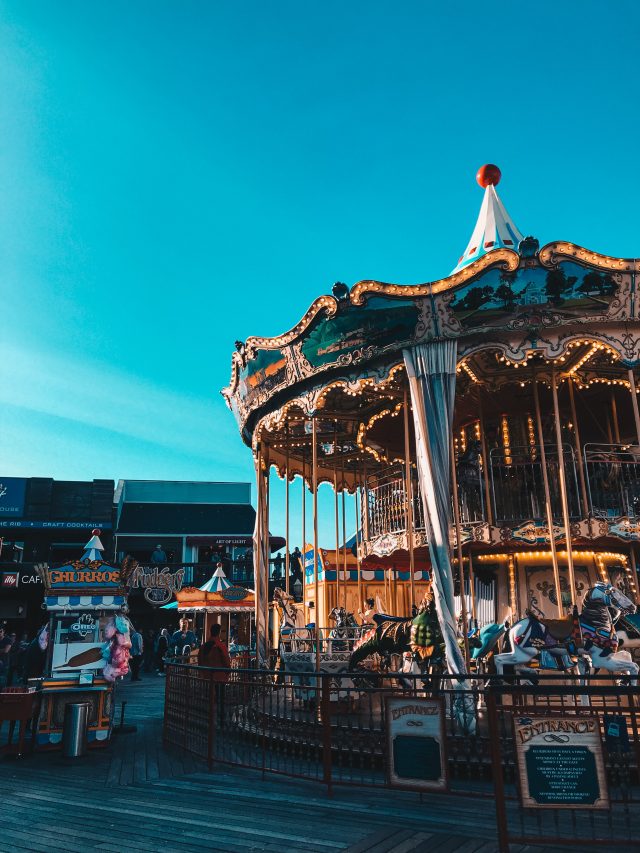 Going around merrily! Photo by Kae Ng on Unsplash

Located in San Francisco’s historic Fisherman’s Wharf neighborhood, Pier 39 is one of the most vibrant and exciting destinations in the City. Full of tourist attractions, it’s also where you can find some of San Francisco’s most recognizable food-related destinations like Ghirardelli Square, In-N-Out Burger, and Boudin Sourdough, as well as numerous pubs, ice cream shops, and seafood spots. Take a walk along the piers and say hello to the sea lions who call these docks their home. Other exciting destinations for a day trip include the Aquarium of the Bay, Magowan’s Infinite Mirror Maze, Musical Stairs, and the San Francisco Carousel.

Notorious for its high cost of living, San Francisco is an unlikely destination for families looking for a cheap family vacation. Here are some of the best things our city has to offer for less than $10 per person. 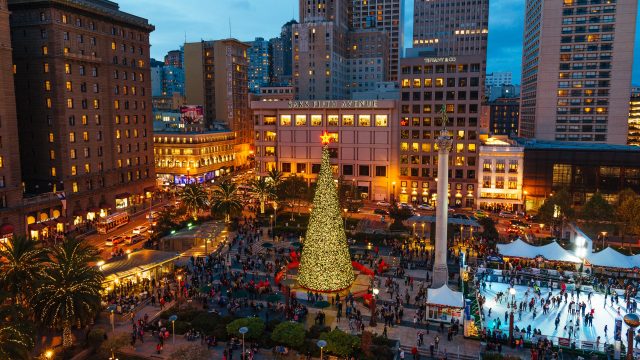 Like 30 Rock, but warmer… Photo by Cedric Letsch on Unsplash

Situated smack-dab in the center of the downtown San Francisco commercial district, Union Square is the City’s shopping center. There’s often live music and other fun events going on during the summer, and it’s conveniently located nearby plenty of cafes where you can purchase coffee and pastries. In addition to Macy’s (which is enormous!), there are a ton of great shopping destinations for kids, such as Jeffrey’s Toys and The Lego Store perfect for your family trip. 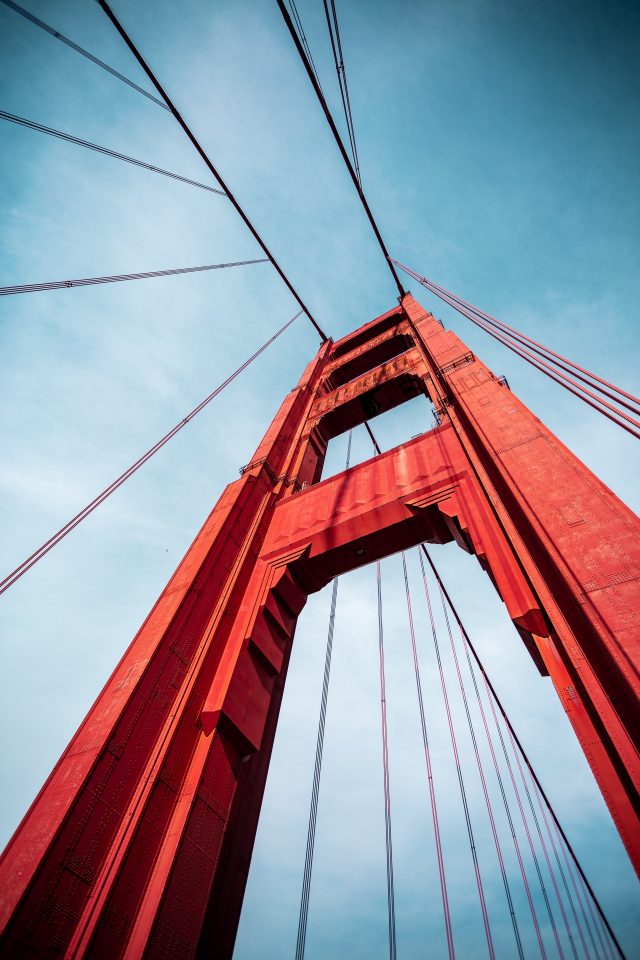 An ant’s eye view. Photo by Gabriel Barranco on Unsplash

Walk Across the Golden Gate Bridge

Another unmistakable site of San Francisco is the Golden Gate Bridge. Internationally recognizable for its distinctive red Art Deco towers, the bridge connects the northwest tip of San Francisco to the Northern Peninsula. Walking the Golden Gate is completely free and open to the public during standard daylight hours. In addition, you can find some lovely hiking trails in the in the Golden Gate National Recreation Area and the Presidio, which oversees the land adjacent to the bridge. Your family can also take a bike or walking tour across the bridge.

Pro Tip: The infamous San Francisco fog (affectionately nicknamed “Karl”) usually rolls in in the afternoon. Make sure to plan accordingly and get to the Bridge early to guarantee a clear view of the Pacific and Bay. 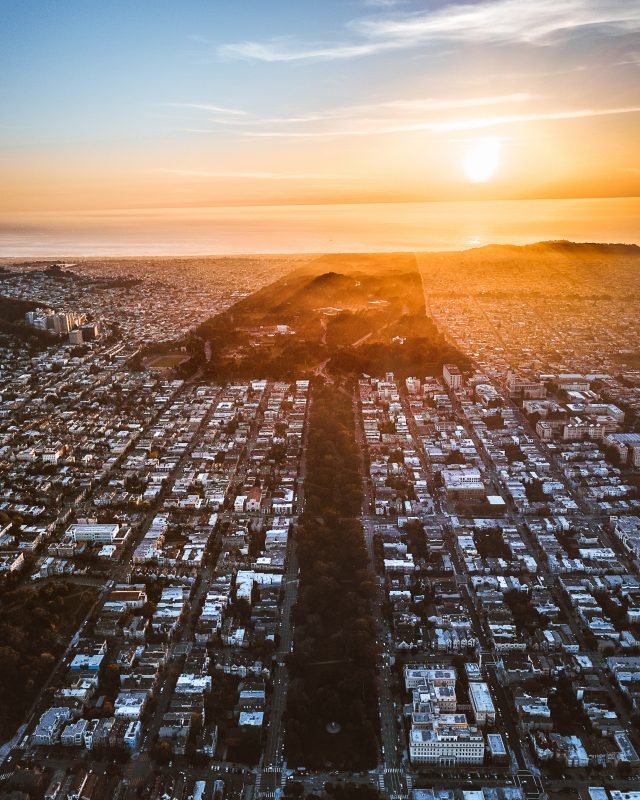 That’s one big panhandle. Photo by Rich Hay on Unsplash

Golden Gate Park is an enormous park that roughly cuts the City in half down the middle. It’s absolutely enormous: more than a fifth larger than Central Park in New York. Walking through the Park is completely free, and there’s so much to see that it’s worth setting aside a day to check it all out. Also, did we mention that there’s a huge ferris-wheel located in the Park? Hop on to provide your kids with lovely panoramic views of the park and City. Also located in the Park are The California Academy of Sciences, the de Young Museum, and the Japanese Tea Garden. As a local tip, the de Young museum has an observation tower that’s free to climb. At the top you’ll find some incredible views of the surrounding Park.

Explore Flowers in the Park

While you’re visiting the Park, we recommend checking out the San Francisco Botanical Garden or the Conservatory of Flowers. The former is the larger of the two and is excellent for older kids who will love exploring the different biomes, including enormous redwoods and primordial ferns! The latter is more condensed, as it’s housed in the gorgeous, temple-like conservatory. The vibrant colors and unique shapes of the rare flowers housed within are sure to spark any child’s imagination.

DON’T MISS! Fall in the San Francisco Bay Area: Best Things to Do with Kids 2021 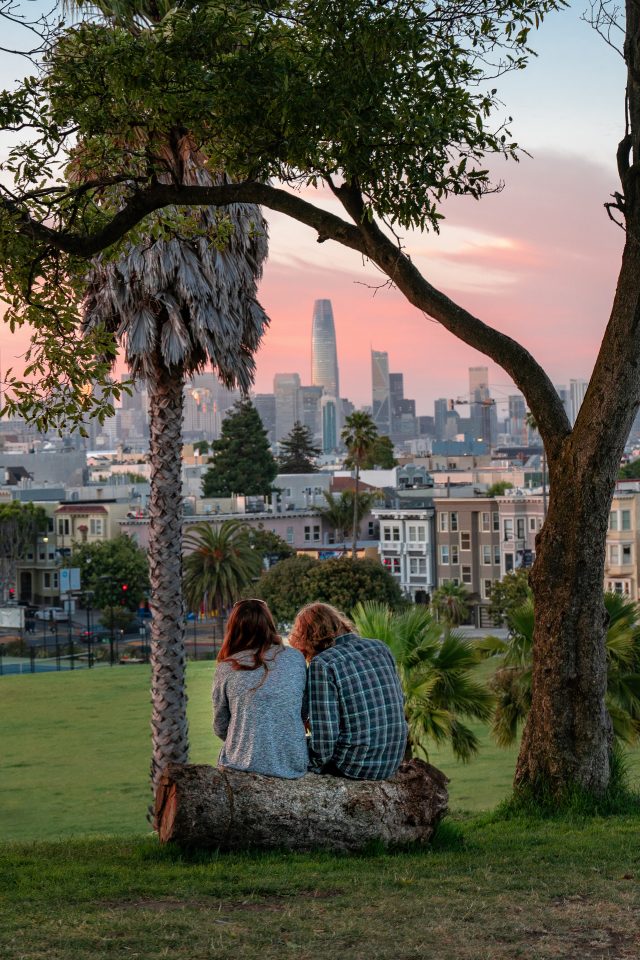 Right before the fog obscured their view. Photo by Fran on Unsplash.

Chill Out at Mission Dolores Park

Located high above the hustle and bustle of the Mission District may be found one of San Francisco’s most famous parks. Frequented by colorful characters and usually crowded with people, it’s an excellent place to have a picnic, enjoy wonderful views of the City, and even do a little people watching. A conveniently placed playground means your younger ones will have plenty of fun, while the surrounding murals offer plenty of chances for photoshoots.

San Francisco has two conveniently placed airports that can both be reached from downtown in about 30 minutes. The closer of the two is SFO, which is in the south of the city and is more convenient for those traveling from farther away. The second is the Oakland Airport, which is situated just across the Bay Bridge. Oakland offers some excellent deals among local airports, including from Burbank. San Francisco is also reachable from Los Angeles by car. The drive takes about six hours overall and affords some of the best views of the California coastline.

If you opt to fly, use our favorite discount airline search engine to find your cheap flights, Cheap’OAir.

If you’re hoping to find a luxurious home away from home, close to all the action but quiet in the evenings, look no further than the Fairmont in Nob Hill. Situated at the top of one of San Francisco’s tallest hills, this world-renowned hotel offers some of the best panoramic views that the City has to offer. From any of its 606 guest rooms, you’ll receive impeccable service, while also enjoying easy access to all the City’s famous sites: simply step outside and catch the next cable car as it trundles by.

Want to be even closer to the action? Then consider staying at the San Francisco Holiday Inn. Centrally located at the intersection of Van Ness Ave. and California St. this deluxe hotel is as convenient as it is comfortable, with a Starbucks downstairs, a Trader Joe’s a couple of blocks away, and one of the main cable car lines literally right outside the front door. Plus, you’re right next to trendy and walkable Polk St. which has plenty of restaurants, pubs, and shopping options available. Walk a few blocks to the west and you’ll stumble upon a hidden gem: Lafayette Park. A popular dog-walking destination for locals, this spot affords excellent views of Sutro Tower, particularly at sunset.

Looking for something a little cozier? The Grant Plaza is a boutique hotel conveniently placed just a few blocks down from San Francisco’s famous Chinatown. If that weren’t enough, you’re just around the corner from Union Square and San Francisco’s main shopping district. Each room has been newly renovated and offers the latest in amenities. But don’t think this means the hotel has lost its personality; it still retains the classic interior of a San Francisco building, as well as the character of the original architecture. Suffice it to say, you’ll feel as if you’ve walked back in time to the roaring 20s when you stay at this establishment.

Despite its reputation as one of the most expensive cities in the US, San Francisco is still a must-see destination for families with plenty of free things to do. Known for its incredible sites and rich history, many people lament the fact that the cost of living is so high there. After reading our list, we hope that you’ve been inspired to explore San Francisco for yourself, without having to stress about spending too much money. At the end of the day, your kids will get an awesome vacation, as well as get to experience some of the best that the City by the Bay has to offer. 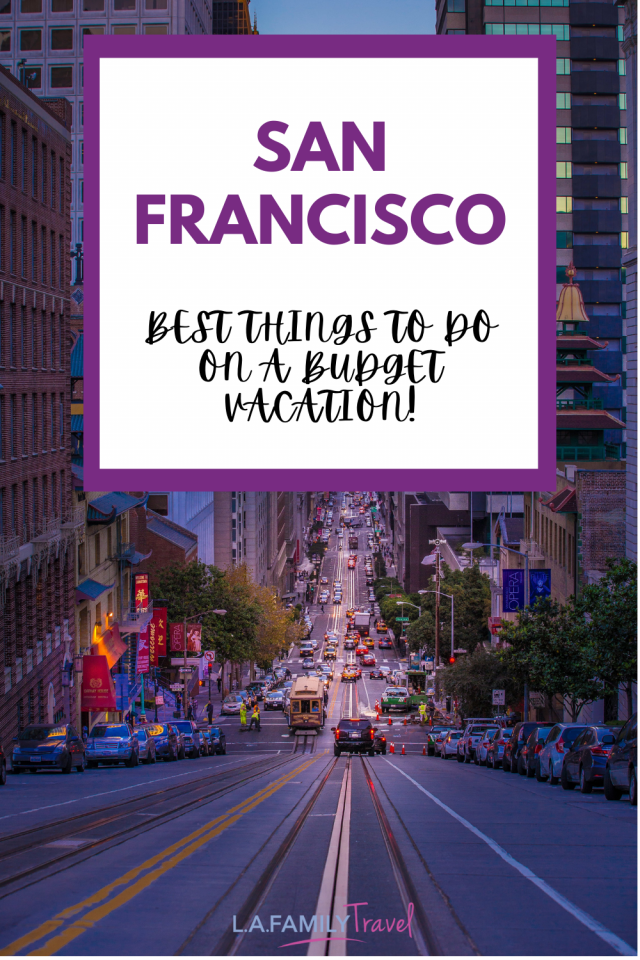 Matthew LaMourie is a travel writer and photographer based in San Francisco, CA. A natural explorer, he specializes in finding out of the way places, even in the most well trodden of destinations. When not on the road, he devotes his time to his loving family, his water color painting, and just walking around his adoptive city, ever curious to see what’s round the next corner.