Cruising San Francisco Bay with Teens on a Kayak Tour 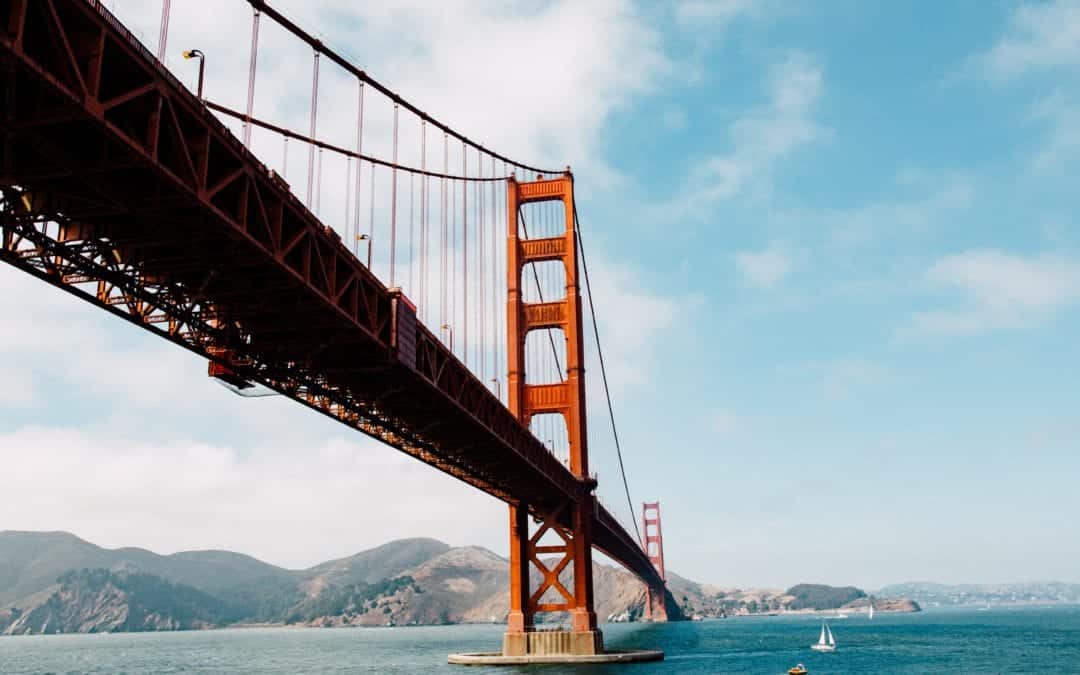 San Francisco's nickname is The City by the Bay, so when I traveled to San Francisco last December with my two teenaged sons, we decided it would be fun to see the city from the bay. So, we decided to take a kayak tour!

NO TIME TO ENJOY THIS NOW? PIN OR BOOKMARK THIS ARTICLE FOR LATER! 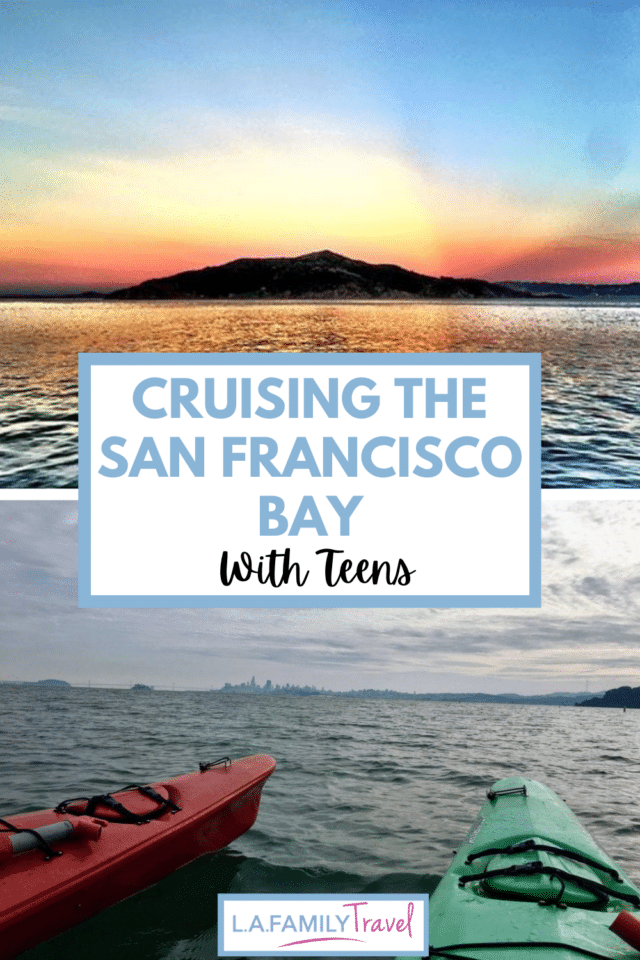 San Francisco is a great place for kids," says Cassandra Costello, a mother of two and Senior Vice President, Public Policy & Executive Programs for San Francisco Travel. "There is so much room to roam, and even though it's a city of 800,000 people, there's lots of access to nature.

Thanks to San Francisco Kayak & Adventures, families can easily access San Francisco's nature by exploring the city's waterways in 2-person traditional closed deck – or "sit in" – kayaks. Unlike "sit on" kayaks that families might be familiar with from warm-weather beach vacations, these allow paddlers to sit inside a cockpit with a waterproof spray skirt that keeps most of the water out – and because we were paddling in cold weather (and therefore cold water), this was an extremely important distinction.

We were advised to eat before we paddled, so of course, we went to Fred's Place, a Sausalito institution since 1966 and home to the famous "Millionaire's bacon," sweet and spicy extra-thick applewood-smoked bacon baked with brown sugar, cayenne pepper, black pepper, and chili flakes – and a word to the wise: don't let the price tag deter you from this "must try" side. The egg dishes are all great, so you really can't go wrong, but a plate of "Fat Fred" deep-fried French toast or thin Swedish pancakes "for the table" is never a bad idea.

With full stomachs and several layers of warm clothing (because: December), we were ready for our private 3-hour kayak tour of Sausalito's Richardson Bay led by San Francisco Kayak & Adventures' Lead Guide Chris Young. As we quickly discovered, this was not only a fun and active way to start our day in San Francisco (and burn off that Millionaire's bacon), but we also learned the history and lore of the area – including a few salty tales of gold rushers, rock stars, and beat poets – as well as lessons about wind, ocean currents, and native sea life, so it was definitely a full-service family activity.

A Guided Sea Kayaking Tour is a perfect activity for families with teens because the guides will instruct, teach, entertain, and endeavor to keep teenagers off their digital devices long enough to recognize that there is a beautiful, magical, tangible, and real water-based world that they are a part of,
Chris said.

As we paddled, Chris talked about the areas surrounding the bay. The first thing we learned is that the name Sausalito is a derivative of the Spanish word sauzalito, meaning small willow grove. Chris explained that early Spanish mariners saw willow trees on the shoreline and knew that willows were signs of freshwater, so the trees let them know that they could refill their water barrels here.

What to Know: Angel Island

One particularly interesting – and historic – spot Chris pointed out is Angel Island, which he described as "the Ellis Island of the west coast" because it was an important immigration center during the pre WWII period.  Also on Angel Island is Camp Reynolds, a Civil War Union troop station. I don't know about you, but when I think of California, I don't usually think of the Civil War, but after the start of the gold rush in 1849, a lot of the gold coming out of this area was going through San Francisco, so in the 1850s, Union troops were stationed on Angel Island and in the Presidio area of the city to protect all that gold. Even my older son – a self-proclaimed Civil War buff – didn't know that fun fact!

Today, the island is managed by the park system as Angel Island State Park, and offers spectacular 360-degree views of the San Francisco skyline and bay. Chris offered a great local tip that Angel Island is one of the best places to see fireworks on the 4th of July because you can see five shows from one vantage point at the top.

Another thing Chris says is unusual here is what they call the "anchor-outs."

"We've had people living on boats anchored offshore since the gold rush," Chris explained.  "When people from all over the world starting coming to San Francisco to explore the gold opportunities, a lot of the them lived on boats so they could easily make their way up to the gold mines."

Nowadays, most people live on these boats to avoid the high cost of living in the bay area's waterfront communities. The accessibility of solar or wind-generated power has made this a much easier way of life than in previous years when they had no source of power. And you can't beat the view.

There are other bay residents that also choose to live in floating homes, but, unlike anchor outs, Sausalito's established floating homes – the largest such community on the planet – are tied to a dock and connected to city utilities including Internet and cable (which my teens were relieved to learn). Plus, they have official postal addresses to receive mail.

According to Chris, the floating homes community in Richardson Bay was created in the 1960s by non-traditionalists, so many of the people who've lived here over the years are writers and artists, including Shel Silverstein, the poet, and writer of "The Giving Tree" was a resident in the 1970s. Because of the community's artistic roots, some of the homes also have very creative architectural features like one that incorporates two old train cabooses into its construction.

Some of the other vessels we saw in Richardson Bay also have pretty cool former lives, including a very rare 110-year-old Dutch barge that transported goods along European waterways before modern trucking routes were established, and a 100+-year-old wooden "Steamboat Willy"-style tug boat named The Go Getter. We were also lucky enough to catch a glimpse of the Freda, the oldest sailboat on the West Coast that dates back to 1885.

When you own boats like these, you become a custodian of something that is historic and beautiful,
Chris noted.

One of the most famous vessels in Richardson Bay is The Vallejo, which started its life as a ferryboat in Portland and later became the location for lectures about Zen Buddhism by Alan Watts, a famous British philosopher who introduced Eastern philosophy to Western audiences in the 1960s. The lectures attracted members of the San Francisco artistic community like Timothy Leary, Janis Joplin, Carlos Santana, and the Grateful Dead, as well as Otis Redding who wrote his famous song "Dock of the Bay" after spending time here.

As we continued paddling, we passed The Bay Model Visitor Center (which is free to visit). Chris told us that there is a two-football-field-long hydraulic scale model of the San Francisco Bay and Sacramento - San Joaquin River Delta System inside that was built in the 50s – complete with regular tides that change every 14 minutes.

"When water goes around an island or hits a shoreline, it obviously starts to do different things than just flow in and out," Chris explained. "So, to figure out how the water actually moves and in what directions it flows, The Army Corps of Engineers were tasked with recreating the bay on a small scale and creating a pump to move water through each cycle like the tide."

Don't Miss! Hop On - Hop Off Bus Tours: An Affordable Way to Travel with Kids

My two science lovers seemed particularly interested in this information, so I made a mental note to visit after our tour.

Before heading back to shore, Chris took us to the edge of Richardson Bay, where it flows into San Francisco Bay, for a spectacular panoramic view of the city's skyline.

It was a great way to get a sense of where we were – and was the perfect reward for completing the 3-hour paddle. As an added bonus, Chris recommended Bar Bocce's amazing wood-fired pizza for lunch (and it was definitely amazing!)

Even with the slightly nippy weather, we all agreed that it was one of our favorite family outings of all time.

Don't Miss! A Local's Guide to the 11 Best Things to do in Chicago with Kids

Richardson Bay tours offer relatively mild conditions, but families can also choose a more urban setting and paddle on the San Francisco Bay to McCovey Cove and the Giant's World Series Championship AT&T Park; however, because this is a more challenging waterway with stronger currents and larger boats, it may not be a good option for inexperienced kayakers or families with young kids.

There are other unconventional ways to see the city. One is through an ETuk ride!

A great local resource to book tours is GetYourGuide or you can look through other water options.

TripAdvisor is a great resource to shop for flights and hotels.

You can also drive from Los Angeles and that takes just over 5 hours.

You can shop for AirBnBs or hotels next to the area where you want to stay with this easy interactive map:

If You Enjoyed This Article, Please Consider Pinning or Sharing It! 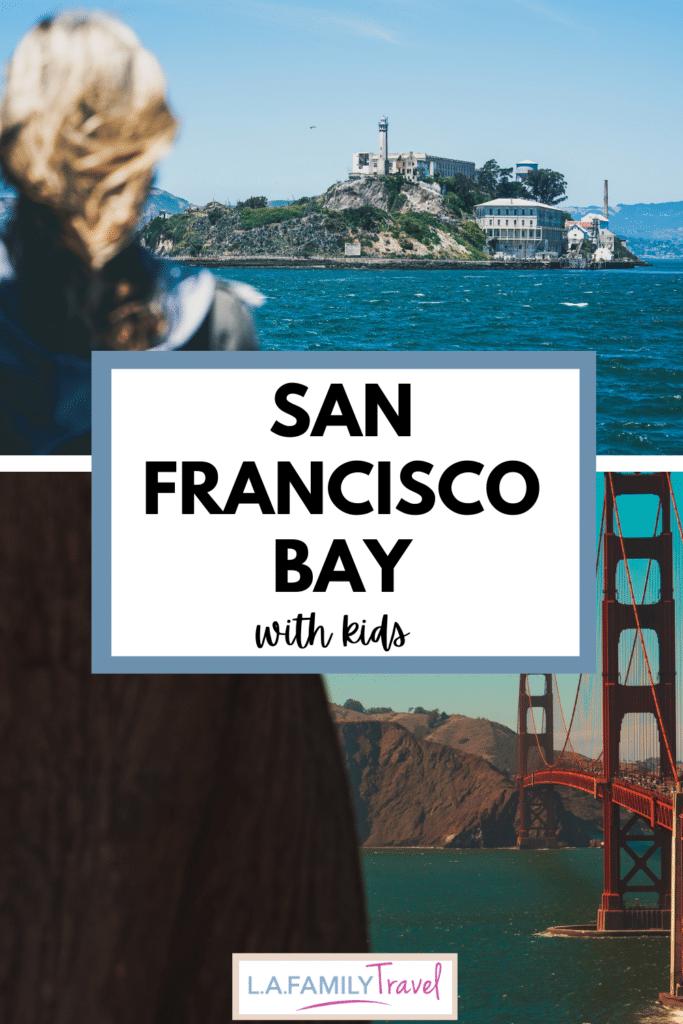