Why the Field Museum Is the Best Kids Museum in Chicago 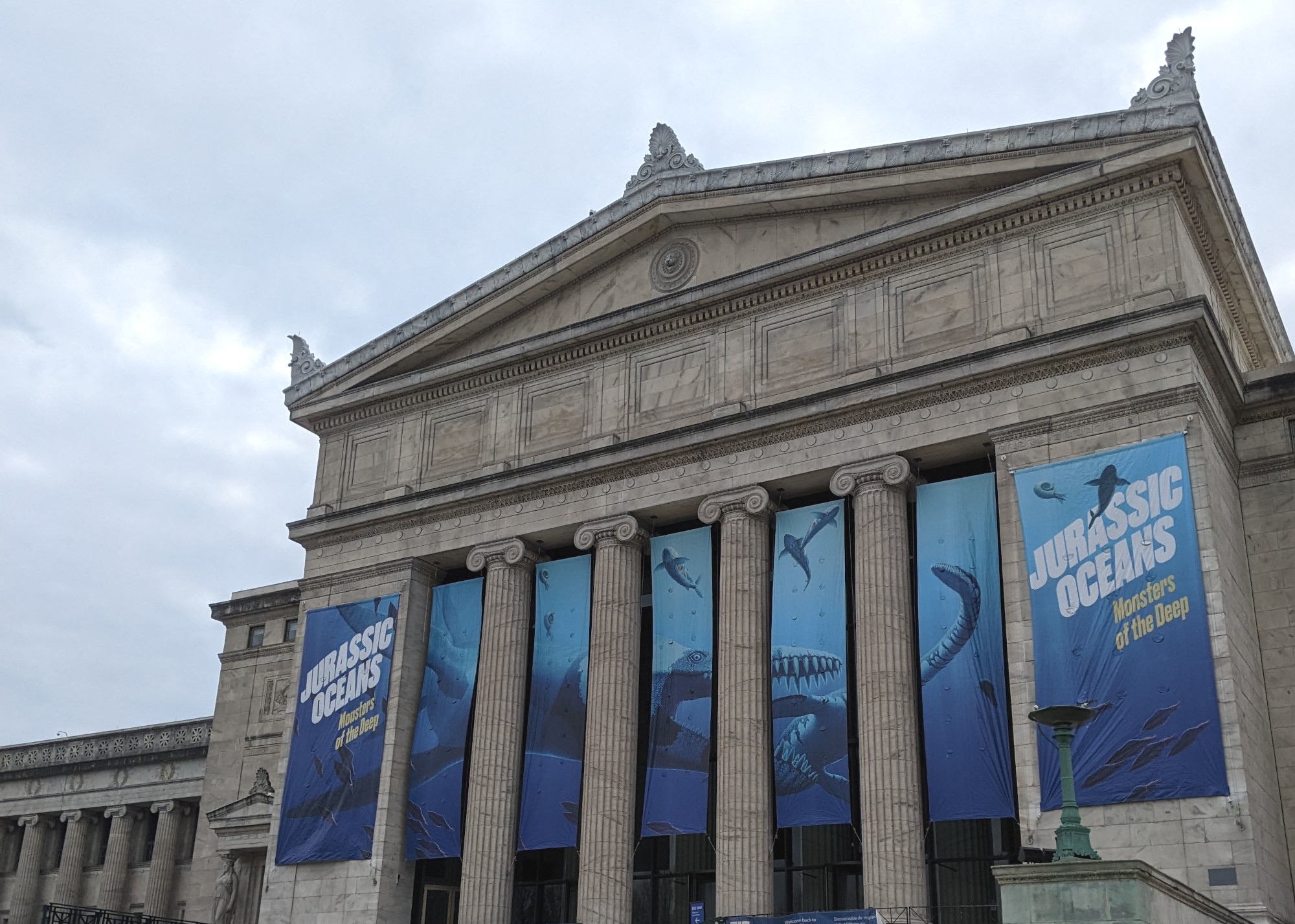 Families need to know that the Windy City has more to offer than sports, skyscrapers, and a big lake. It also has some of the best museums in the United States.

The Chicago Children’s Museum, and its tinkering lab, is in the middle of all the excitement with a prime location at Navy Pier. The Art Institute of Chicago is a good place to see tons of masterpieces, and the Museum of Science and Industry has an impressive collection of planes, trains, and even a U-boat. But there’s one museum that stands out as the most family-friendly, entertaining place for kids of all ages to have a great day. Here’s why the Field Museum of Natural History is one of the best children’s museums in the world.

NO TIME TO ENJOY THIS ARTICLE NOW? PIN IT! OR BOOKMARK FOR LATER! 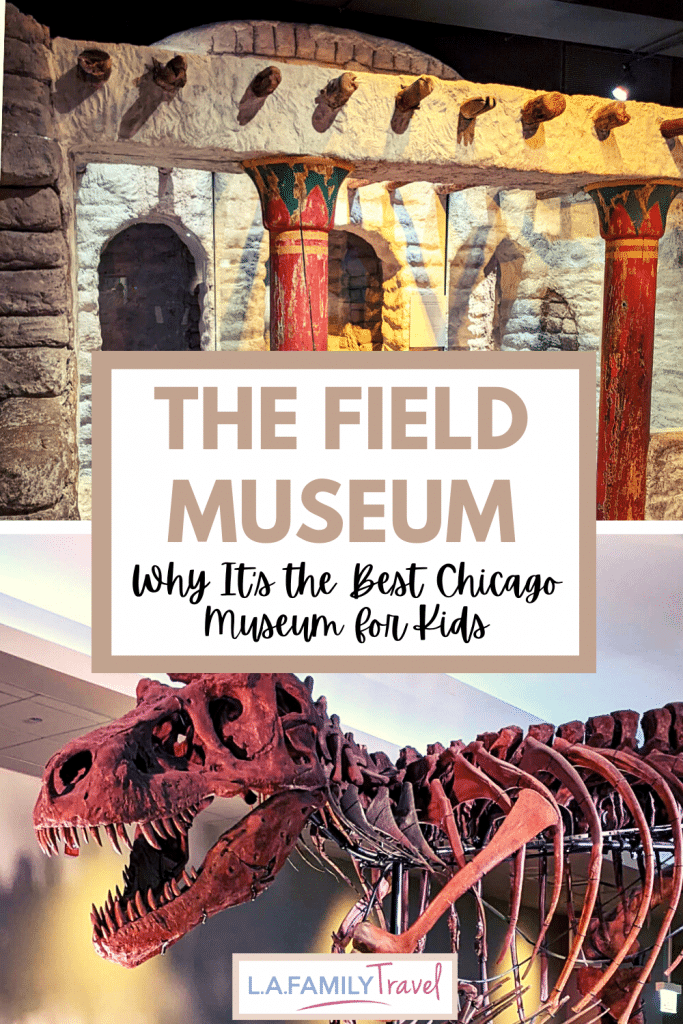 Right in downtown Chicago, the Field Museum is located on Lake Michigan near Adler Planetarium and the Shedd Aquarium (and its beluga whales!). You can probably fill a whole day by visiting just the museum or just the aquarium, but I love that they are situated together in case you want to do a half-day at each attraction. The Field Museum is about a mile-and-a-half walk from Millenium Park and the Art Institute of Chicago. You can take public transportation for a shorter walk, although the path from the Metra station to the museum campus is still half a mile.

Pro-Tip: In addition to the food options offered inside the museum, the surrounding area also has vendors with ice cream and hot dogs for quick meals and snacks.

Don’t Miss! Why a Chicago Architecture Tour Is the Best Way to See the City

The Field Museum’s most famous displays might be its dinosaur bones, which draw kids and adults alike. When you enter the main hall of the museum, you are greeted by the giant bones of Maximo, a titanosaur. Guests can text Maximo questions about his species, his life, and even the discovery of his fossils. On the second floor, walk through the extensive exhibit detailing the development of life on earth; the red bands denoting mass extinction events are particularly impactful. The star of this section is Sue, one of the world’s most complete T-Rex skeletons. You’ll also see fossils of sabertooth tigers, woolly mammoths, and a giant ground sloth (I know it says “giant,” but I wasn’t prepared for the size of that one!). Don’t miss the fossil preparation lab, where you’ll see scientists carefully examining small pieces of history. 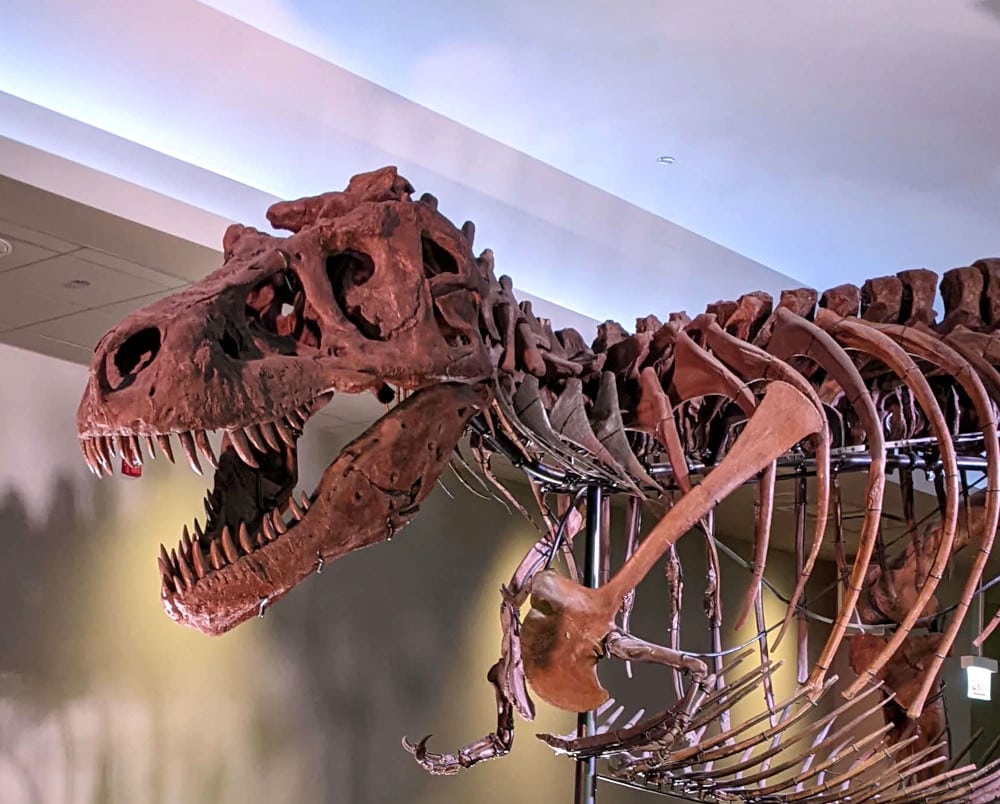 Sue the T-Rex is the Field Museum’s most famous resident. Photo by Christy Nicholson.

Africa and the Halls of the Pacific

Some of my favorite parts of the Field Museum are the maze-like hallways showcasing life in other parts of the world. There are thoughtfully curated exhibits showing clothing, art, and lifestyles from other cultures. If that sounds too dry for your little ones, don’t worry. The exhibits are creatively displayed as houses, villages, and towns, with beautiful architecture and fascinating nooks to explore. There’s plenty to touch and investigate at the kid level, from interactive exhibits to hands-on quizzes. Don’t miss the Maori meeting house, where Maori people would meet for celebrations, funerals, and community meetings. It was originally constructed in New Zealand in 1881!

Pro-Tip: Check the museum calendar for special events like visits from archeologists and biologists. 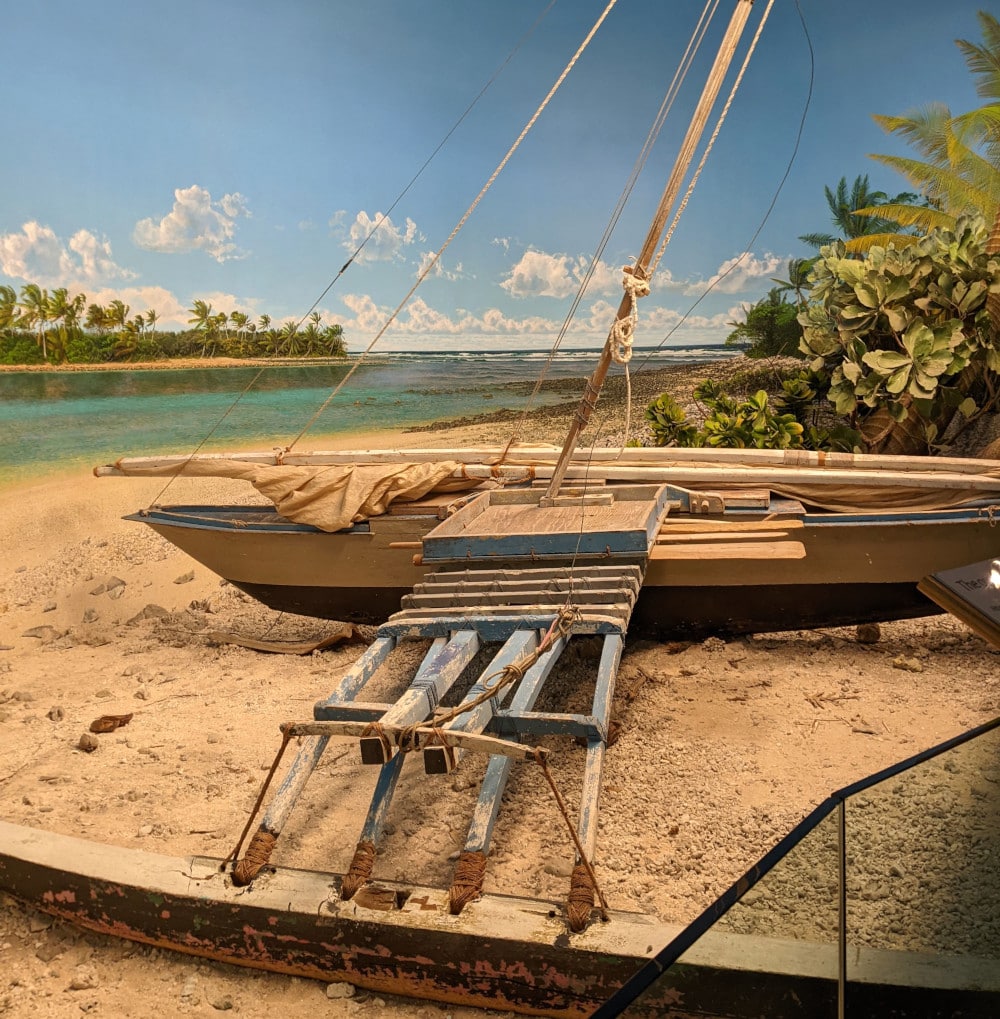 A tropical vacation? Not quite, but the Halls of the Pacific will make you feel like you’re really there. Photo by Christy Nicholson.

When we entered the Field Museum’s Egypt exhibit, I was shocked. I had no idea that one of the largest collections of mummies in the United States was in the basement of a Chicago museum! Enter into the dimly lit hallways, and you’ll see elaborate sarcophagi and mummies displayed next to ancient artifacts. Not a fan of mummies? Head straight through the mummy display to arrive at the large hall set up like an ancient Egyptian marketplace. Highlights for our family included the ancient royal boat and the temple that had a spell for curing a sick cat. 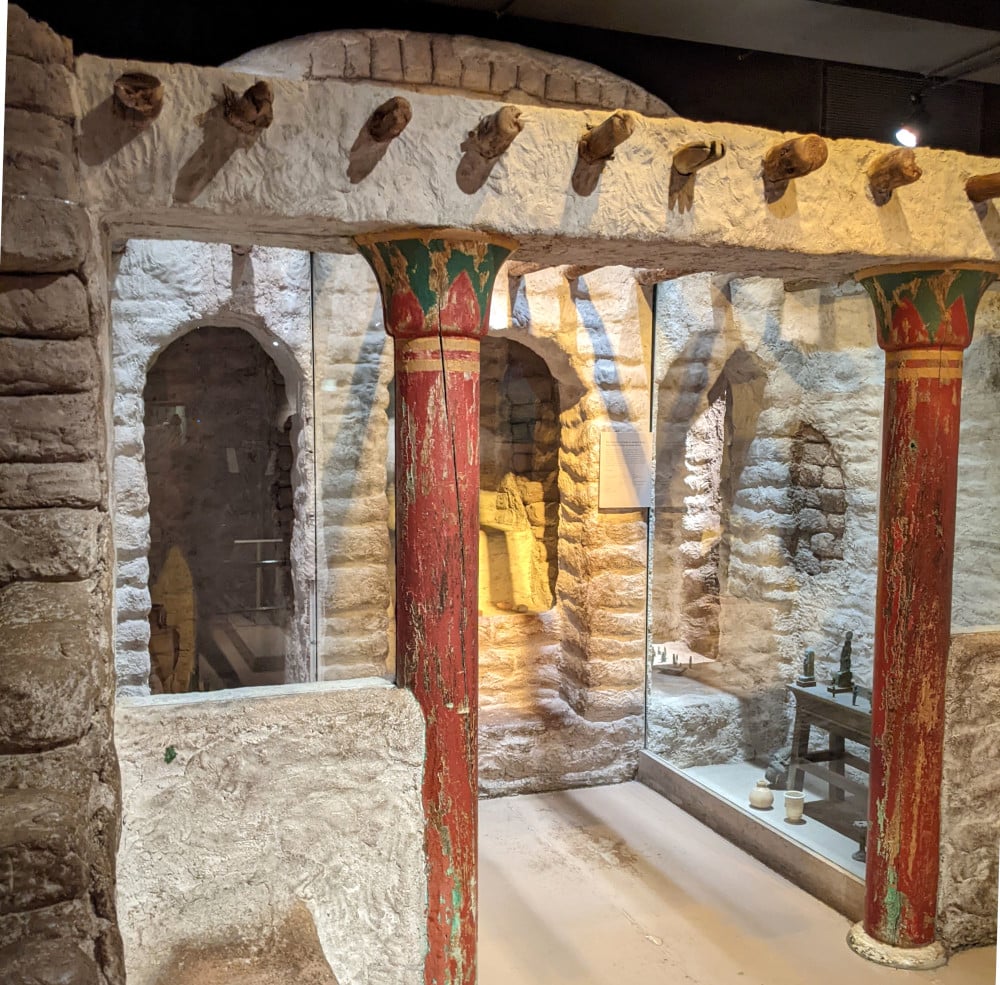 The ground floor of the museum features a recreation of an ancient Egyptian market, including a temple dedicated to cats. Photo by Christy Nicholson.

The Field Museum was established in 1894, with many of its first displays coming from the 1893 World’s Fair. The organization doesn’t shy away from its roots, and there are still several older exhibits, like the hall of taxidermied animals, which were there in the museum’s early years. These days, the displays are augmented with helpful signs explaining the history of the collection and how curation techniques have changed to become more sustainable over the years. I found one of the older exhibits particularly delightful: the meteor area displays several space rocks that landed in the U.S. and tells the stories of the families who discovered them (the photos that show how the meteors burned holes through cars and houses are fascinating but not at all scary). 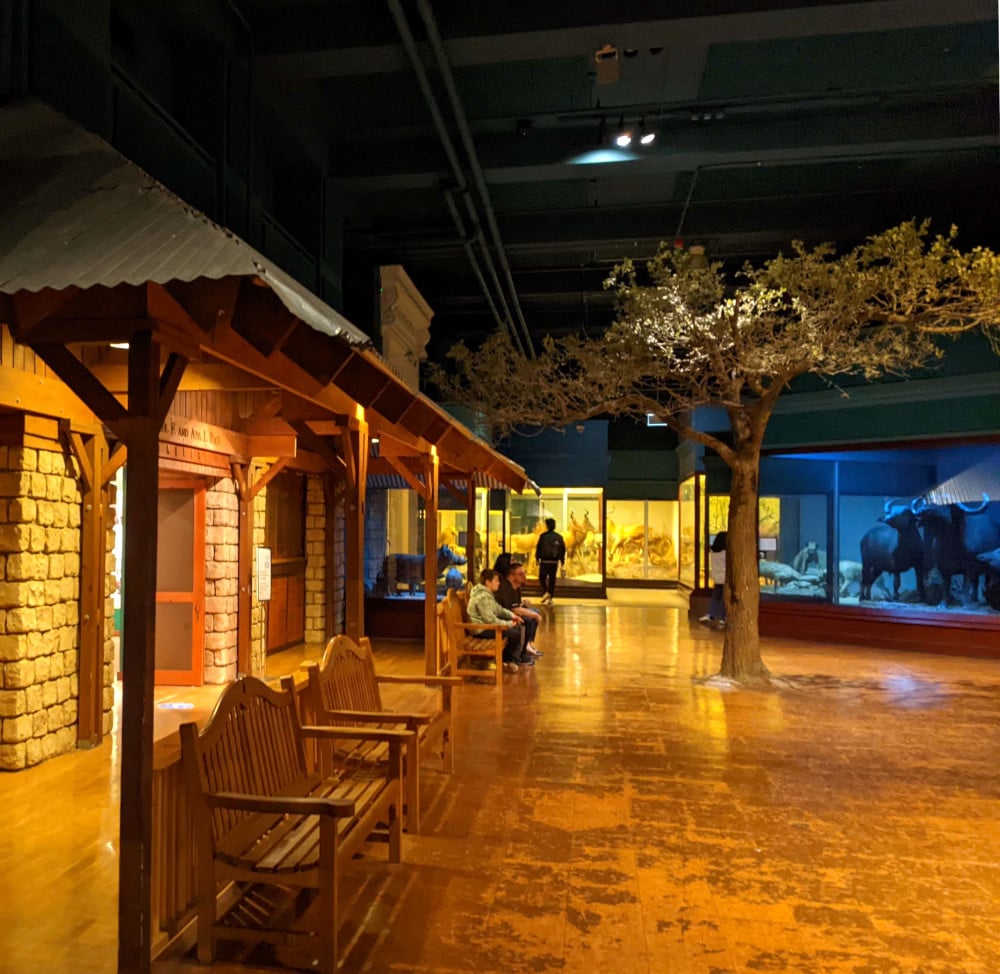 I did not care for the hall filled with taxidermied animals. Fortunately, there was a comfortable seating area with a movie I could watch while my kids explored the exhibit. Photo by Christy Nicholson.

In addition to the fossil lab, the museum also features a DNA lab and an artifact conservation laboratory. Throughout the day, you’ll see scientists and curators working in the labs, preserving and learning about new parts of the museum’s collection. Young children should check out the Crown Family Playlab, which features imaginative activities, especially for kids ages 2 to 6 (bonus: there’s also a private nursing room). 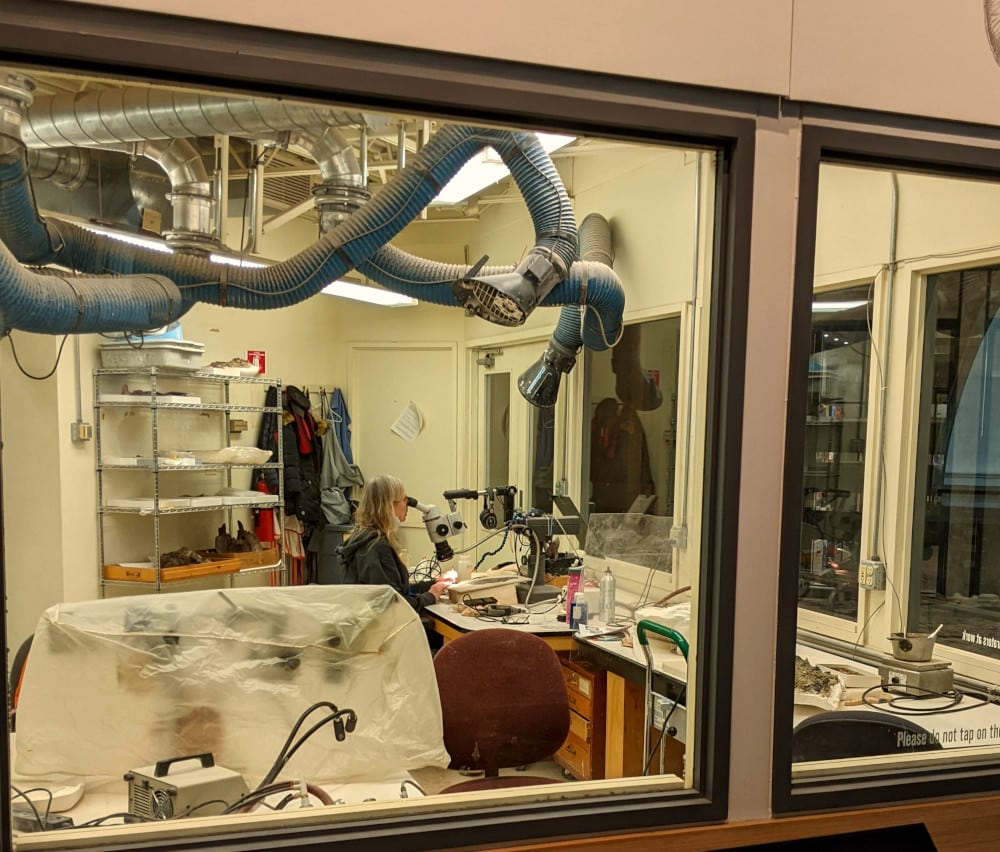 Scientific research is conducted each day in the museum’s labs. At times, you can even chat with the scientists about their work. Photo by Christy Nicholson.

In addition to the permanent halls, there are rotating, temporary exhibitions that add even more value to your day at the museum, like the current Jurassic Oceans exhibit from London’s Natural History Museum, which includes giant fossils of prehistoric marine mammals. There are other premium areas not included in general admission, such as the Hall of China – with objects spanning over 10,000 years of China’s history, including a 27-foot-long scroll – or Underground Adventure, which features exhibits about dirt and bugs (what more could any kid want?). While basic admission is the cheapest way to see the museum, you’ll need an All-Access Pass to gain admission to every exhibit. (Illinois residents get extra discounts.)

Don’t Miss! A Local’s Guide to the 11 Best Chicago Activities for Kids

As a mom, I loved the thoughtful touches the Field Museum has added to make visits easy. There are benches throughout the exhibits, and several of the maze-like hallways have maps to show where you are. At lunchtime, we enjoyed eating at the Field Bistro, which has a variety of options for fresh-cooked food and grab-and-go meals. Later in the day, we discovered the Explorer Cafe on the museum’s lower level; the casual atmosphere and outdoor dining area make it a perfect stop for families with kids. There’s also a vending room with snack machines and plenty of tables (a great place for snack time!).

There’s one museum in Chicago that stands out as the most family-friendly, entertaining place for kids of all ages to have a great day. Here’s why the Field Museum of Natural History is a must-see for families.

Basic admission to the Field Museum starts at $20 for ages 3-11 and $27 for age 12 and up. Exhibits requiring additional tickets are $12 per child and $16 per adult, and 3D movie tickets are $5 for kids and $7 for adults. Save money by planning ahead – the Discovery Pass provides general admission plus a ticket to one special exhibition for only $7 extra.

Want to see it all? Then try an All-Access Pass, which offers basic admission, a 3D movie, and access to all four ticketed exhibitions. All-Access Passes cost $29 per child and $40 per adult.

You’ll find an amazing number of wonderful places for kids in the Chicago area, and I recommend you hit as many as you can (don’t miss the African American Inventors exhibit at the Bronzeville Children’s Museum or the Butterfly Haven at the Peggy Notebaert Nature Museum). But out of all the places we visited in Chicago, the Field Museum did the best job of having things to interest everyone, including young kids, older kids, and adults. Thanks to the museum’s impressive collection, thoughtful layout, variety of exhibits, and extensive food options, we all had a great day learning about natural history. 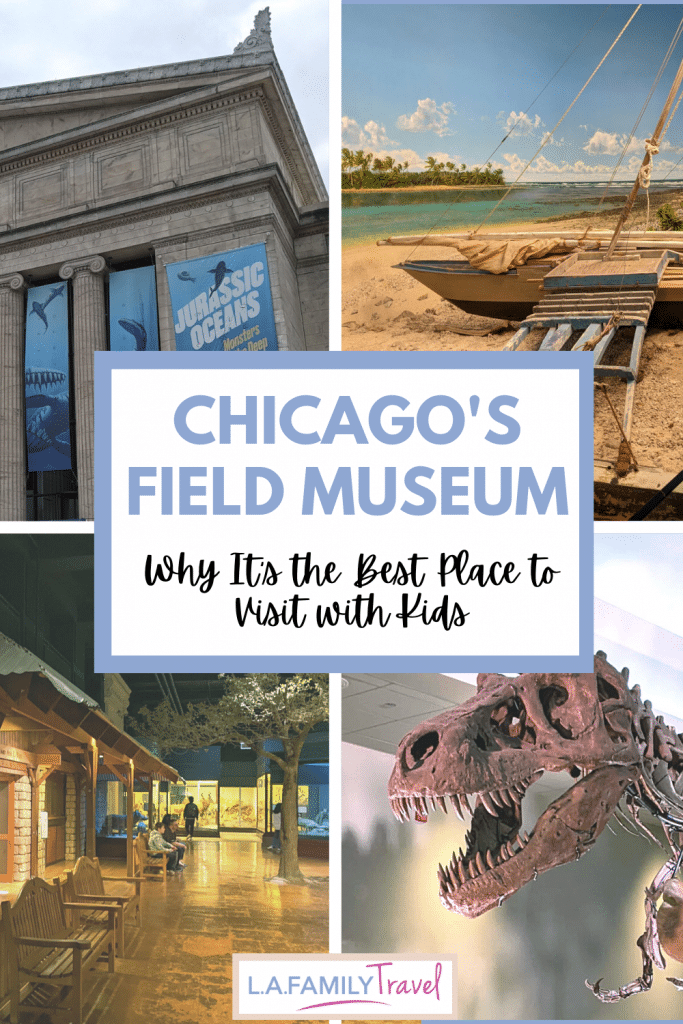