The wind leads the leaves in a Rumba as they sway to a daring gust that cuts through Yosemite National Park. The clouds form shapes any contortionist would admire, with a backdrop of blue so deep, your heart can get lost in its gaze. 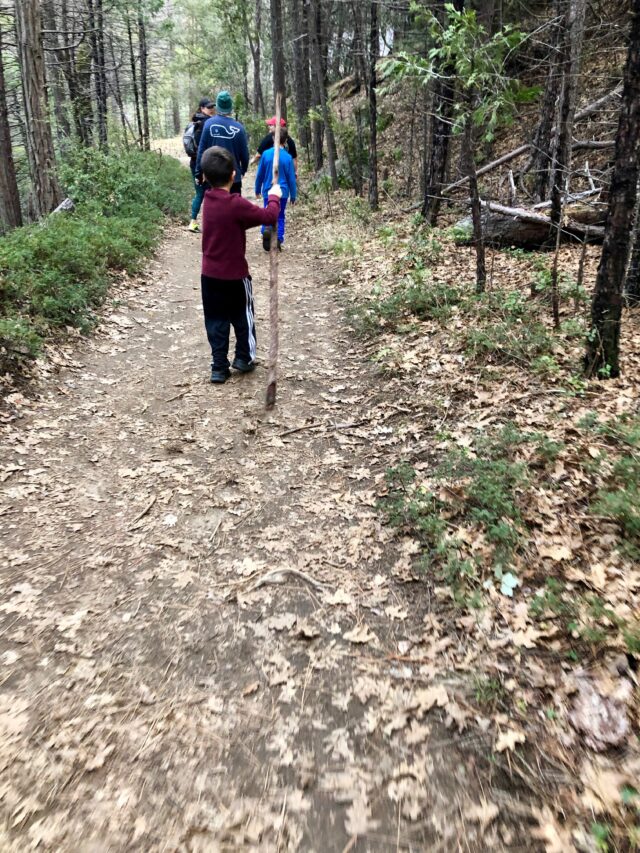 It’s nature our family seeks when we want to take a family trip to get away from it all. It’s the trees and the wind and the crisp air that fills our lungs in a way that’s more fulfilling than any city air could be. 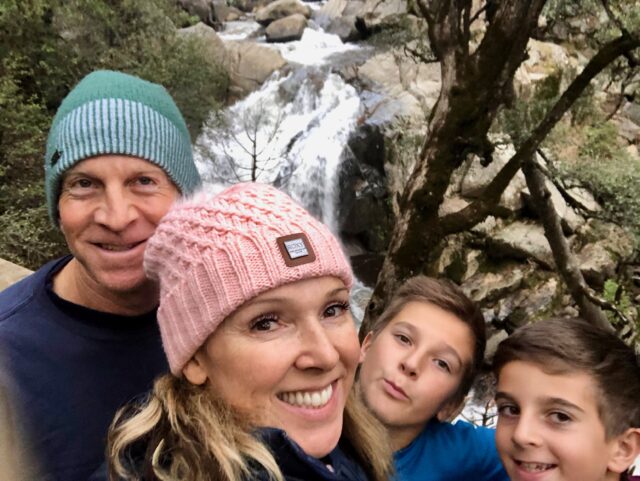 NO TIME TO READ NOW? PIN OR BOOKMARK THIS ARTICLE TO ENJOY IT FOR LATER! 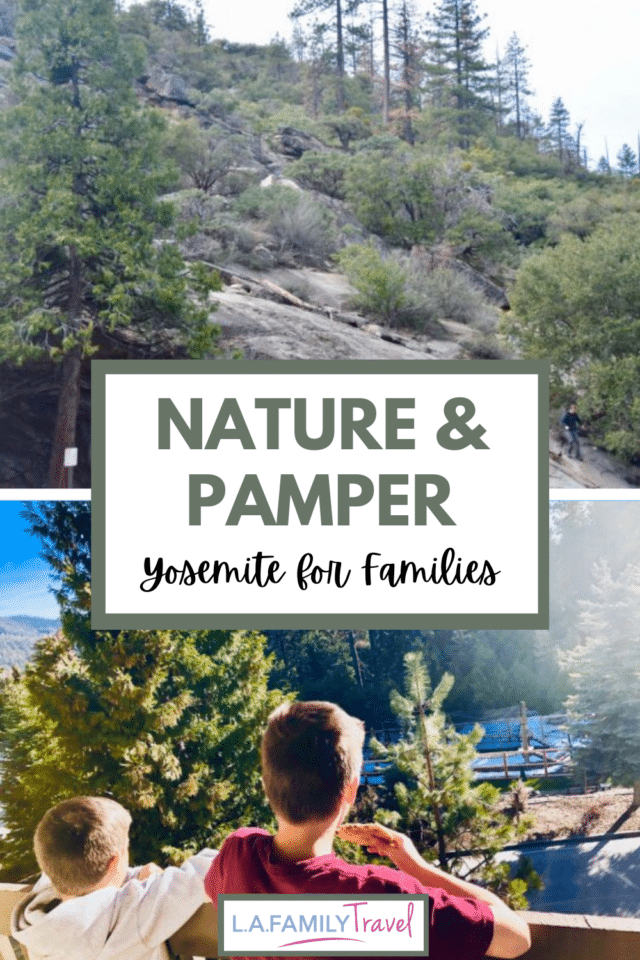 Over Thanksgiving break, as our snowshoes crushed through sheets of ice just outside Yosemite National Park during our night hike, our guide, Ian, told us we were trekking about 200 feet from a black bear’s home. Our beams of light cut through thick night to reveal evergreens, resting in cool stillness. “Don’t worry,” he said, though I’m not sure his words had the power he hoped, “He’s too smart to bother tourists, and besides, he’s probably sleeping.” He pointed his flashlight toward a patch of pine trees, at what looked like a Hobbit house, a mass of tree roots rising from the ground like a wooden moon, a type of shelter in which some Yosemite bears hibernate. 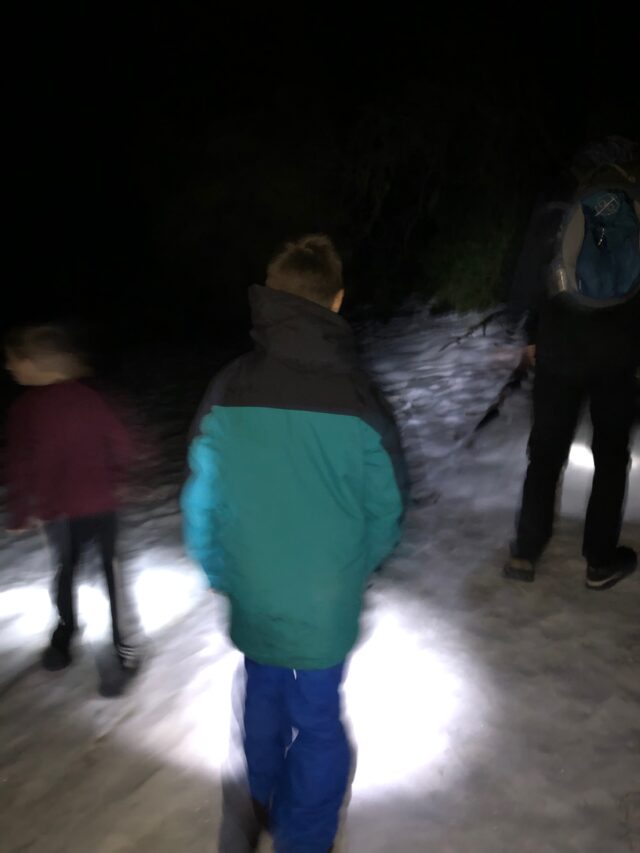 We couldn’t see the stars that evening because the clouds hid them but Yosemite night is different from Yosemite day and Ian, from the Tenaya Lodge at Yosemite, a dog-friendly resort about two miles from Yosemite National Park’s South Gate, patiently explained to us city folk about the various elements we encountered as we encountered them. 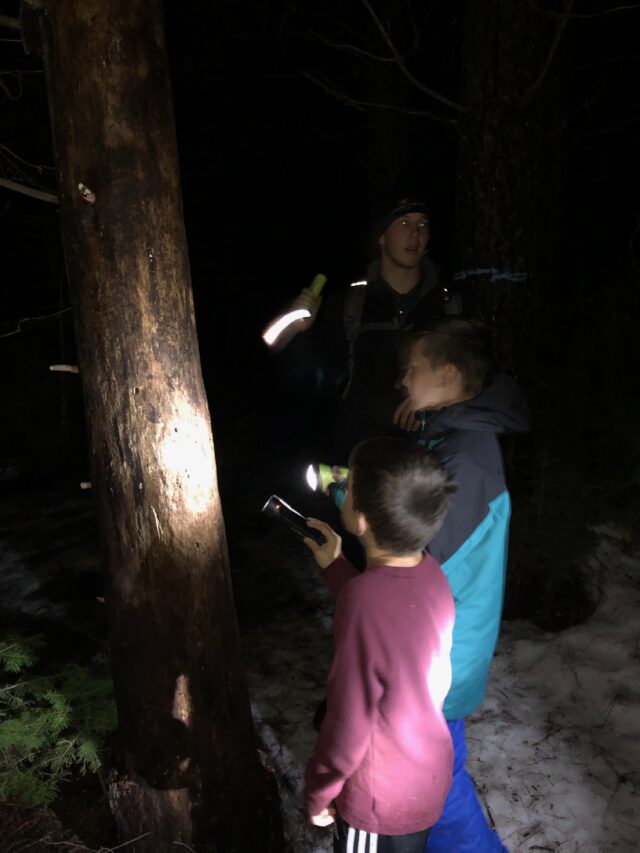 Ian pointed to a group of trees. “White Fir are the weeds of the forest because 95% of them will grow when the seeds hit the ground.” Our seven flashlights, two from my boys, two from me and my husband, two from a couple visiting from Riverside and Ian’s, lit up the massive mountain menaces and I giggled to myself as I wondered if rangers tried to pull them like regular weeds.

It’s nature our family seeks when we want to get away from it all. It’s the trees and the wind and the crisp air that fills our lungs in a way that’s more fulfilling than any city air. Yosemite has that air.

The nightly, guided nature walks are just one of the many offerings the Tenaya Lodge makes available to guests who want to immerse themselves in the beauty of the Yosemite experience but who also want to hold onto the comfort and luxury portion of their vacation. With Tenaya Lodge’s five restaurants and deli, plus the array of pampering services offered in their spa, guests will get the best of both.   Ian pointed to another group of trees he identified as Ponderosa Pines and said many of them were being invaded and killed by Japanese Bark Beetles. He told us our bear friend enjoyed munching on the dead pines “like candy” to get at the beetles. We hoped that would satisfy his hunger and that he would peacefully snooze his way through winter. 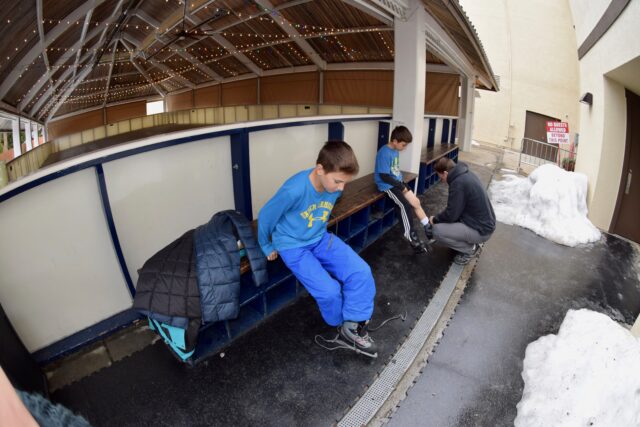 After the excitement of our nocturnal adventure, the boys rushed to the on-site, covered ice skating rink where we all changed into skates and sped around as fast as our shaky balance would allow. A game of sharks and minnows upped the thrill and many spills were taken by those whose heart was really in the game. Just outside the rink, a giant fire licked the sky beneath the shadowy evergreens in a pit perfect for toasting marshmallows. We bought s’mores kits from the hotel market and with our sticky fingers and mouths, we called it a night. 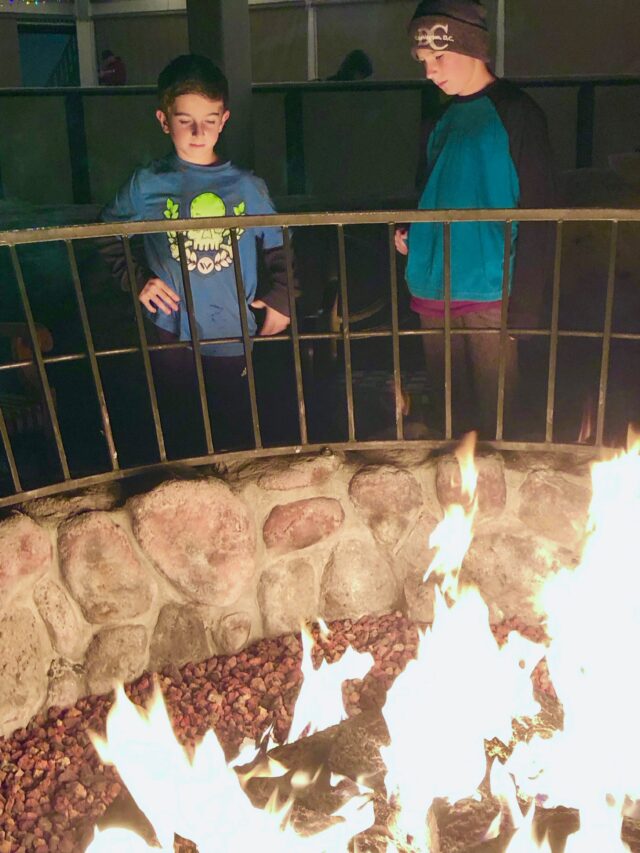 It’s experiences like these that Delaware North, the owners and operators of Tenaya Lodge at Yosemite, have desired to bring to visitors since buying the property in 2001. Sinking millions of dollars into the resort for renovations and upgrades since then, they also just built 50 stand-alone, two-bedroom cabins, called Explorer Cabins that offer guests a more intimate experience of Yosemite. This area has its own community clubhouse called the Explorer Clubhouse that has a library, board games and special events like wine tastings. Cabin guests also have access to all the amenities in the 75-acre resort like the indoor and outdoor pools, the three hot tubs, and the Kid’s Adventure Club. 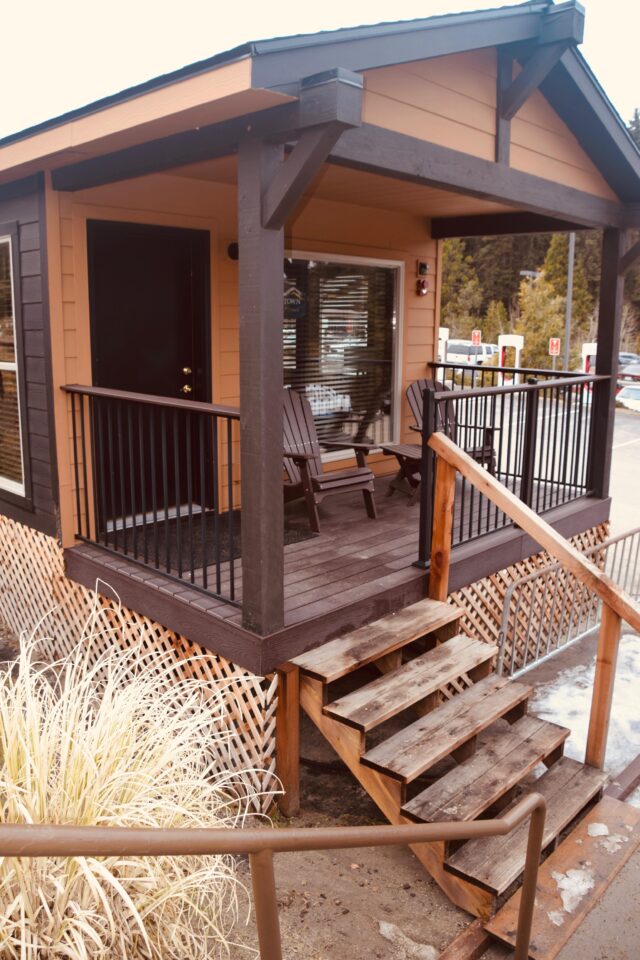 The main part of the lodge has 240 rooms and 57 cottages, all renovated in 2016. The room sizes range from 350 square feet to 850 and some are in an adults only section of the lodge with rooms specially designed by the Puccini Group to have what looked like a “Mountain Modern” feel. The cottages are located a bit below the main lodge with fireplaces and rain showers. 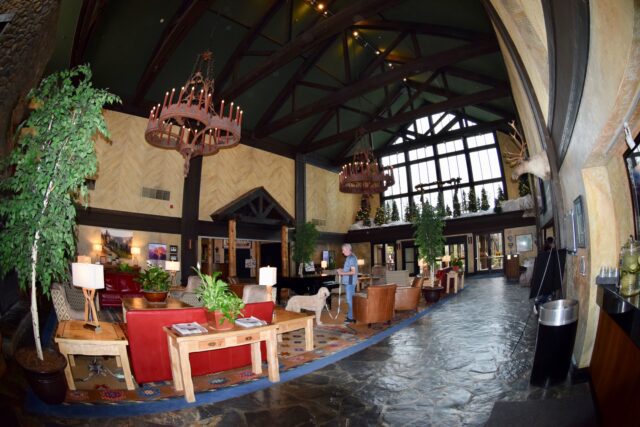 We stayed in the Spa Room of the main lodge with a private balcony overlooking the Kid’s Adventure Club, closed for winter. It included a very tempting looking ropes course and a sledding area that didn’t yet have enough snow to open. Our spacious bathroom had a whirlpool tub next to a wall of shutters that opened to the living area from which the forest draped its beauty under the balcony. 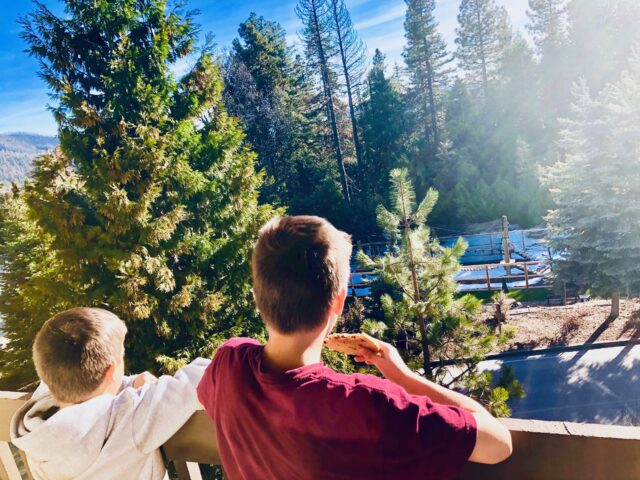 Another, not to miss experience at the main lodge is the 10,000 square foot Ascent Spa. The spa is LEED certified, which stands for Leadership in Energy and Environmental Design, and they go out of their way to set the standard not only for green practice but also for responsible consumerism. Their gift shop tries to retail products from companies which only use organic ingredients and give back to the community. This is the place you go if you want to treat your body to a ritual that will melt it into its healing zone. All that bickering between the kids? Forgotten. That guy that cut you off in traffic? Hope he got to where he was going on time. For your one hour treatment, plus however long you can manage to stay in the hot tub and sauna, you get to smell beautiful scents and relax with a medley of Oriental plucking sounds. 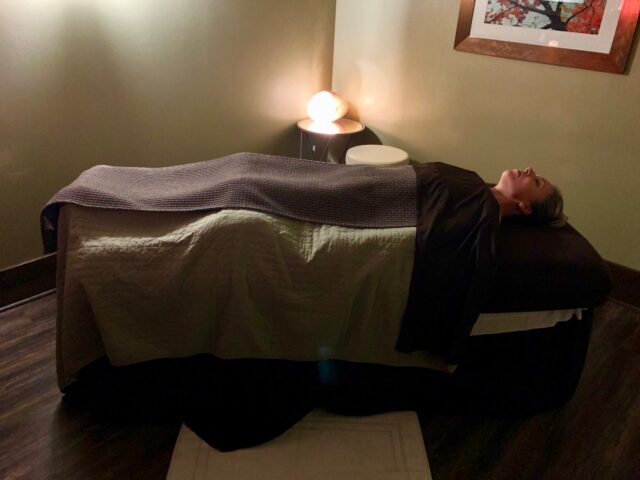 When you’re ready to check out Yosemite National Park, a great, first stop is the Tunnel View Overlook. The hotel tour guide who recommended it told us it was the most photographed site in Yosemite and when we got there, we could see why. After arriving at the South Gate of the park, off Route 41, the road transforms to Wawona Road and it’s a straight 40 minute shot to the longest tunnel in California, Wawona Tunnel. At the end of the tunnel, on the left, is a parking lot and a walled walkway where Yosemite Valley stretches through the valley, bordered by El Capitan, Half Dome and Bridal Veil Falls.

The Tenaya Lodge also offers half and full day tours of Yosemite Park. You can be one of the first to try out their open-air buses in their newly expanded fleet. There is also a nifty, do-it-yourself guide through Explore Better. There’s no better way to see El Capitan and Half Dome, unless you’re climbing them. 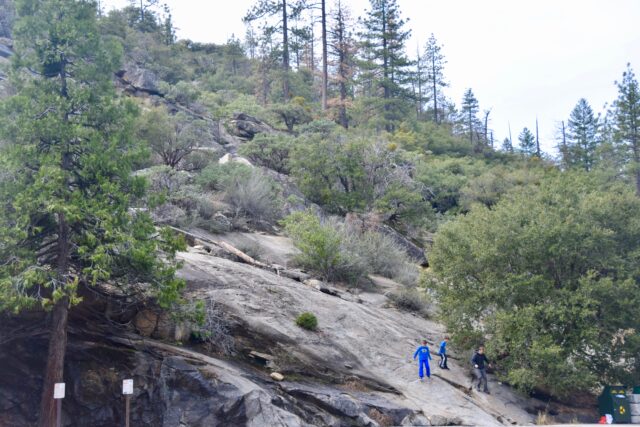 As you drive out of the Tenaya Lodge parking lot onto Route 41 and see the charred remains of trees after the Railroad Fire, you remember what Ian told you, about the beautiful surrounding sequoias and how their cones couldn’t open to spawn without the power of fire. 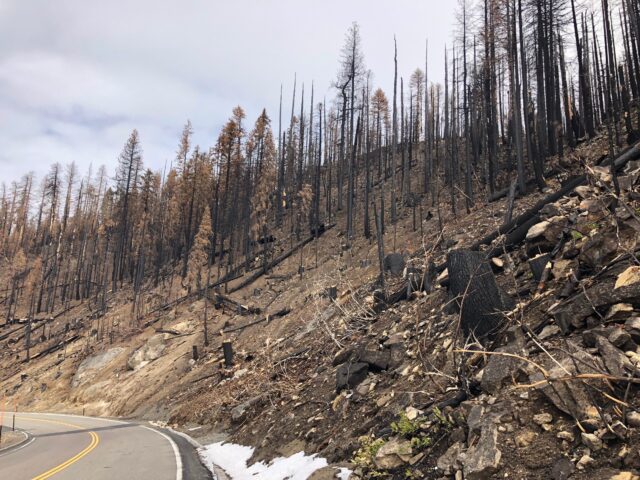 Then, as you look around the monolithic trees covering the hills around the road, you might wonder how many have bears making their dens around them.

For the fastest route from LA, take the I-5 freeway north for about two hours and connect with CA-99 north just after you go over the Grapevine. Take the 99 all the way to Fresno. There you connect to CA-41, drive for an hour, and this will take you right to the park. Tenaya Lodge at Yosemite is located 62 miles north of Fresno International Airport (FAT) on California State Highway 41 and 2 miles from the south entrance to Yosemite. During the winter months, snow chains may be required on State Highway 41 or Highway 49. For highway information and snow chain requirements, please call 800-427-7623. When chain control is in effect, all vehicles (including four-wheel drive) must carry tire chains. In extreme weather conditions, even four-wheel drive vehicles will require chains. 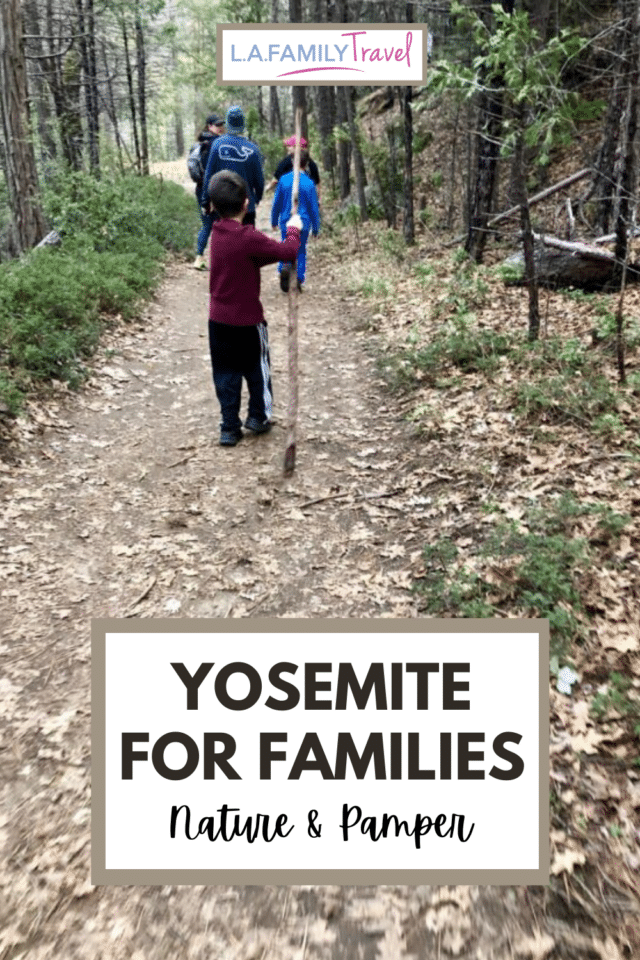