What to Expect if You Visit Universal Orlando During COVID 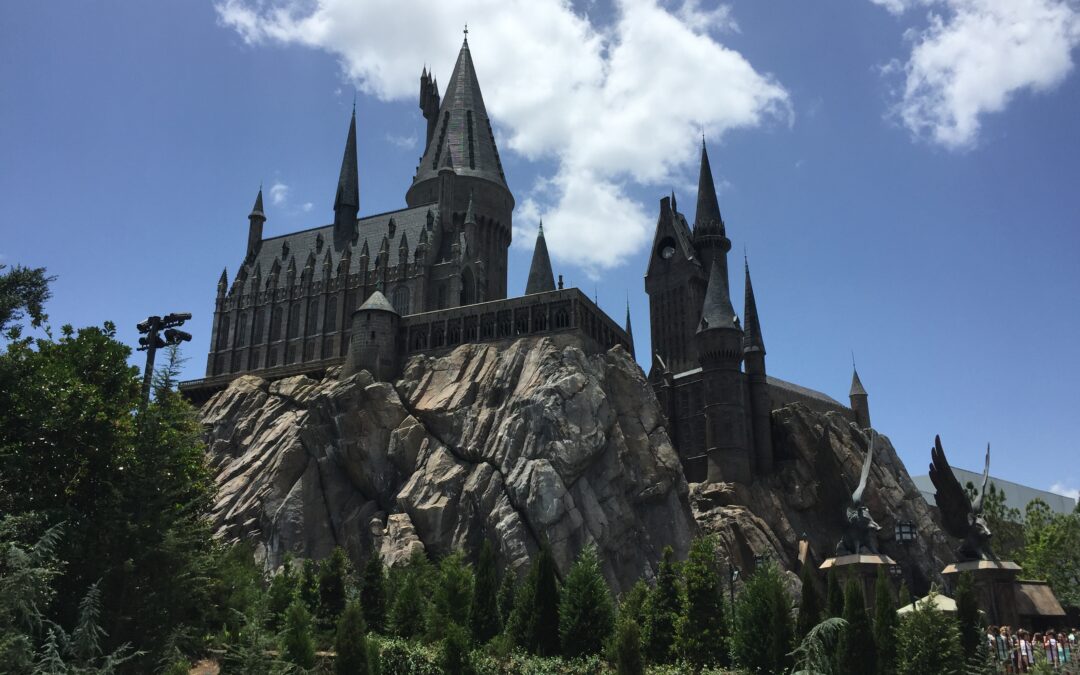 The world is starting to open back up. As a travel agent, that's a relief. As a mom, I need to know how that's happening and the best ways to travel safely.

And here's what my kids love: Central Florida's theme parks are preparing to welcome visitors! Our favorite park, Universal Orlando's Resort just announced they will reopen on June 5th. But things will be a bit different for now. If you take your family trip to Universal's Orlando Resort this summer, here's what to expect: 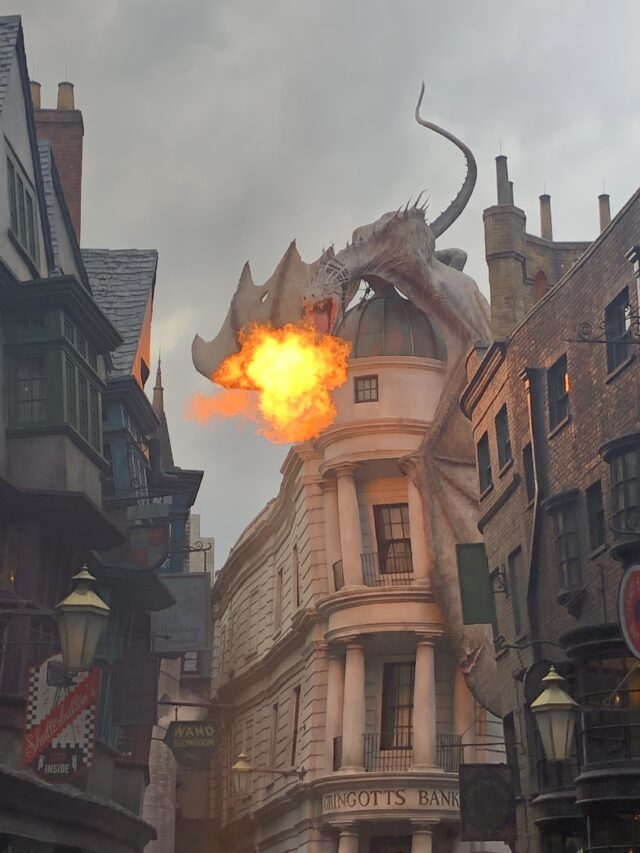 The Ukrainian Ironbelly Dragon that guards Gringotts will be ready to greet you soon! I'm sure she will be exempt from the mask requirements

Contents hide
1 Before you go
2 Masks
3 Parking and Entry
4 Restaurants
5 Rides
6 Shows, Characters, and Play Areas
7 What about the other Theme Parks in the Orlando Area?
7.1 Where to Stay
7.2 How to Get There

Universal Orlando will be requiring all guests and team members to wear a face-covering at all times. Choose a lighter color face mask, if you can. Remember how hot it is to wear a black t-shirt in the summer? Now imagine that effect on your face!  Universal Orlando will have some face masks for sale, but I would highly suggest you bring your own in case they are sold out. It would be a bummer to get all the way there and then be turned away because you don't have a mask. Universal Orlando plans to sell fun themed masks in the future, but as of now they just have plain masks. I would bring a backup mask, if you can, in case your mask gets lost on a ride or gets wet. Those Central Florida sudden rain storms can be brutal. The mask must be worn over your nose and mouth. You can remove your face covering when eating or drinking, of course, as well as when you are in a pool or another water attraction. Team members will wear face coverings at all times, unless they are serving as lifeguards or in another role where they can't safely wear them. Guests who have not yet turned 3 are exempt from this requirement, because it can be dangerous for children that young to wear masks (and let's be honest, toddlers aren't going to wear a mask for long anyway). If you have a disability that prevents you from wearing a mask, team members will refer you to guest services to discuss reasonable accommodations. 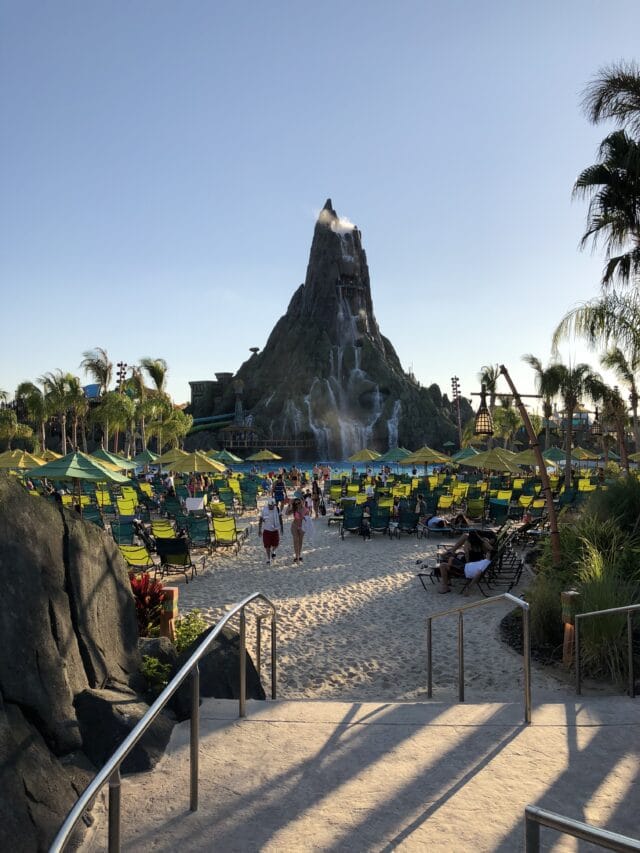 No masks allowed in the wave pool at Volcano Bay. So no need to invest in a Trikini 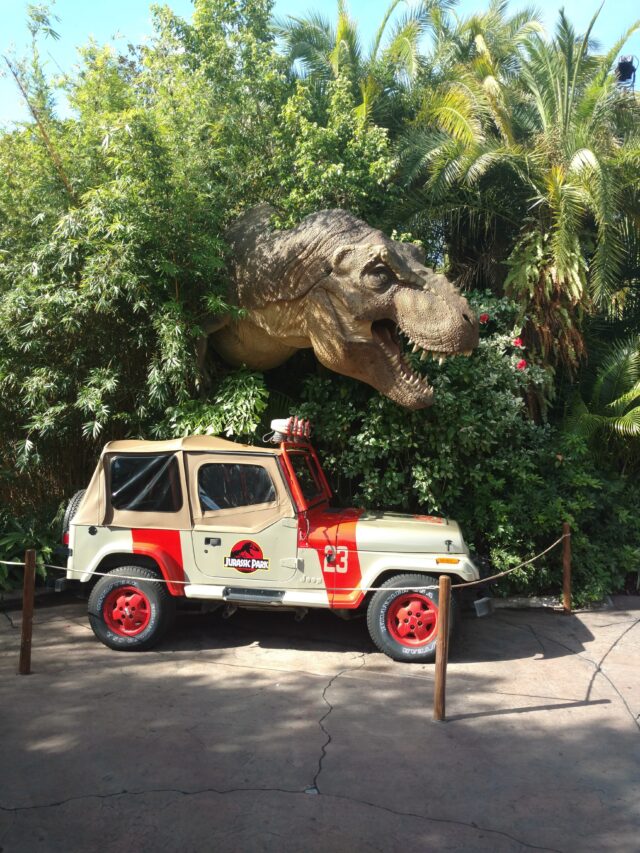 I doubt your parking spot will be this secluded, but Universal Orlando is hoping to avoid crowds in the parking garage.

Restaurants at Universal Orlando will be operating at a reduced capacity. They will not be accepting reservations, so you might have to wait for a table. The provided menus will be paper single use versions, and some restaurants will be offering a limited menu. Tables will be spaced apart to promote social distancing. Mobile ordering will be offered for quick-serve restaurants. Universal Orlando offers touchless payments such as Apple Pay throughout the resort. I suggest eating during non-peak times to avoid some of the wait and crowd. My husband and I love to eat a big snack around 3 o'clock and then grab a late dinner after the parks close when we visit. 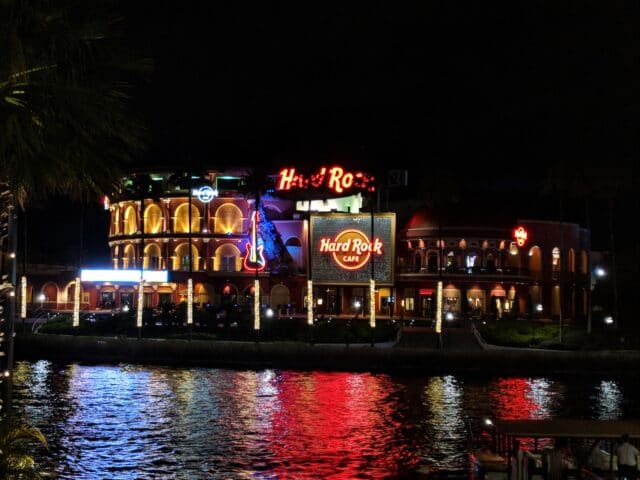 If you eat late you'll avoid the crowds and get to enjoy this beautiful view!

Don't Miss! Cutting the Line: A How To Guide For Your Fav Theme Park

The nighttime show at Islands of Adventure, which is projected onto Hogwarts, is very popular. But the crowds are usually packed in shoulder to shoulder, which Universal Orlando will need to avoid for now. Universal has not announced whether they will run the show with more crowd control or if they won't bring it back just yet.

Pro Tip: Get a Hot Butterbeer from the Hogs Head Tavern to enjoy during the show

Universal Orlando has not made an announcement about their beloved characters walking around with guests at the park. However, characters have been out and about in Citywalk, though they are not doing traditional meet and greets. They are keeping their distance.

Play areas will remain closed. Because you try keeping kids distanced in a play area. 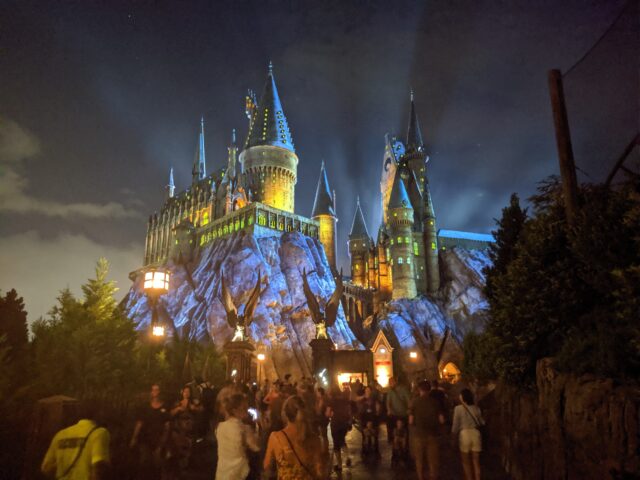 Nighttime Lights at Hogwarts Castle is my favorite nighttime show in all of Orlando.

Our favorite park, Universal Orlando's Resort just announced they will reopen on June 5th. But things will be a bit different for now. If you take your family trip to Universal's Orlando Resort this summer, here's what to expect...

What about the other Theme Parks in the Orlando Area?

Walt Disney World plans to reopen July 11.  Seaworld is planning for a June 11 reopening, Legoland is reopening June 1, Legoland will be conducting temperature checks but unlike their competitors Legoland will not be requiring masks.

Universal Orlando has announced their resort hotels will open December 15, 2020. Dockside Inn and Suites was set to open in March. That opening was postponed.

How to Get There

The easiest way to get to Universal Orlando's Orlando resort from Southern California is to fly into Orlando's International Airport (MCO). If you're flying, you should check your airline's requirements. Many require masks while on the plane and in the airport. It's easy to get an Uber, Lyft or taxi from the airport. Feel like taking a road trip? Universal Orlando has ample parking available on site.

If you found this article helpful, please consider sharing or pinning it!

Emily Householder Stacey is a writer, travel agent and mom based in sunny Cleveland, Ohio. Emily runs Aida's Adventures travel agency while her son takes his afternoon nap. She has traveled throughout Australia, Asia and North America and the rest of the world is on her bucket list. Emily and her family love a good theme park. They have annual passes to 5 of them!