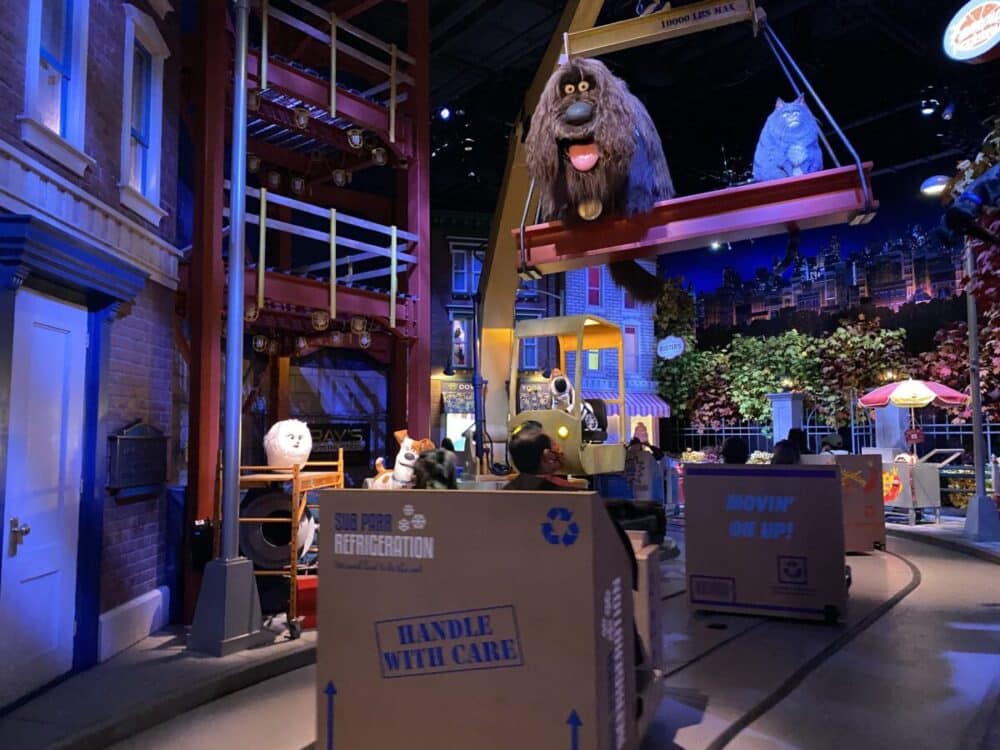 Secret Life of Pets: Off the Leash! is the ride Universal Studios Hollywood was missing.

It’s no secret that Universal Studios Hollywood has a serious real estate challenge. Between being built into a hillside in L.A.’s Cahuenga Pass to sharing space with one of the largest working movie studios in the city, the theme park often has to take out old attractions just so they can squeeze in new ones. Fortunately, in the case of the park’s latest ride – The Secret Life of Pets: Off the Leash! – the Universal creative team was able to transform an area previously used only for event space to bring the all-new attraction to life without sacrificing any fan favorites.

NO TIME TO READ NOW? PIN OR BOOKMARK THIS ARTICLE TO ENJOY LATER! 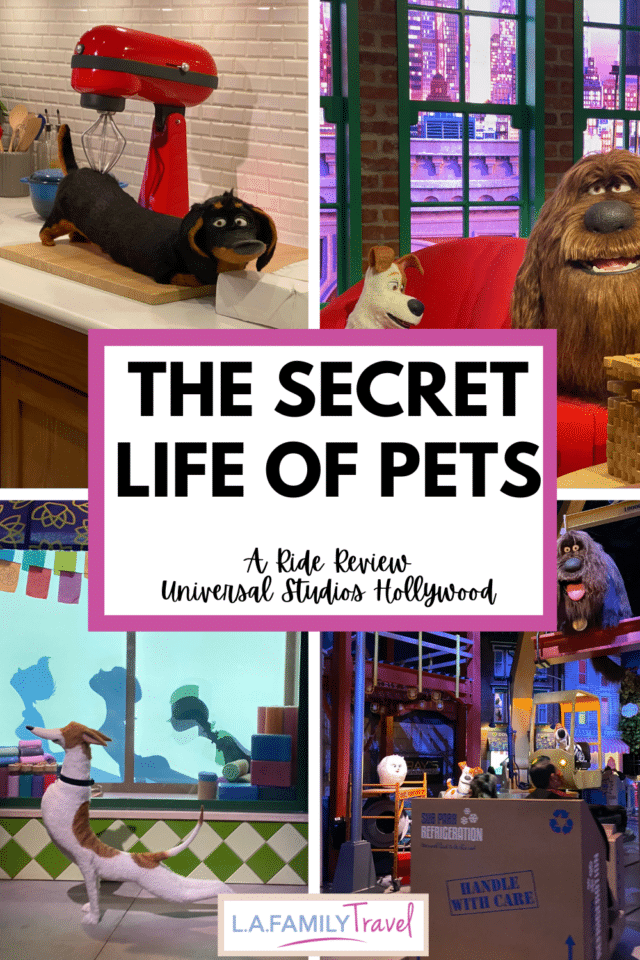 Secret Life of Pets: Off the Leash! was about 2.5 years in the making, working closely with the entire team at Illumination Entertainment to come up with this adventure,” said Jon Corfino, senior director and executive producer for Universal Creative. “One of the things that really resonates with everybody is the fact that we all love our pets and animals, so it’s that kind of heartfelt experience that extends to the brand and was our objective with the ride.

The charming new attraction is a welcome addition to the park’s already family-friendly upper lot, and while based on the popular “The Secret Life of Pets” films, previous knowledge of the movies and its furry characters is not required – something I was grateful for since having two 20-something sons put the relatively new franchise off my radar. Plus, the ride’s original storyline transforms park guests into lost puppies in search of forever homes, which is another reason riders who’ve never seen the movies will still enjoy the adventure. 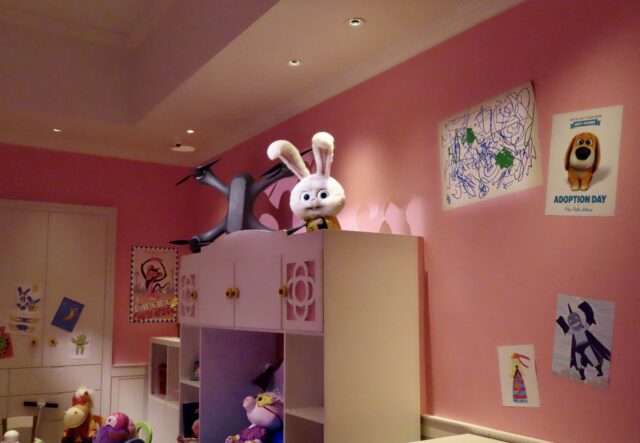 We have this great franchise which is really in the ‘sweet spot’ of Illumination where it’s family but not necessarily little kids,” Corfino explained. “So, it made all the sense in the world to put it next to Despicable Me: Minion Mayhem and have this become an Illuminations neighborhood.

What to Expect: The Ride 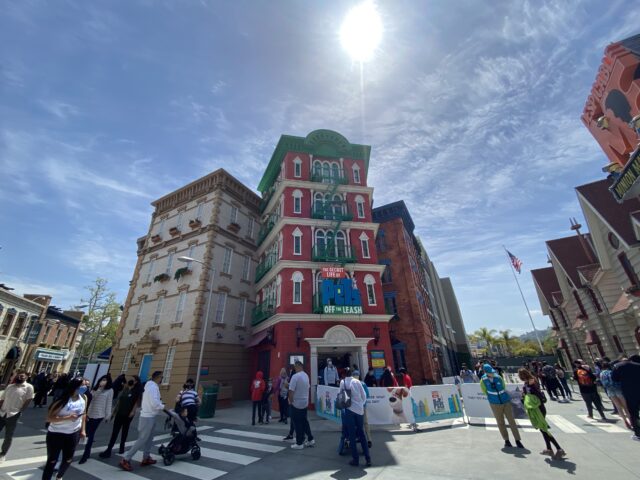 Guests are immediately immersed in the attraction’s story as they make their way through the queue experience inside Katie’s New York City apartment building from the movies. Here, they encounter a parade of unsupervised pets like Norman the guinea pig, who acts as an unofficial tour guide; Buddy the dachshund, who’s getting a kitchen counter massage courtesy of a stand mixer; and Snowball the somewhat controlling rabbit, who comes up with a plan to get the lost puppies into an adoption fair across town. 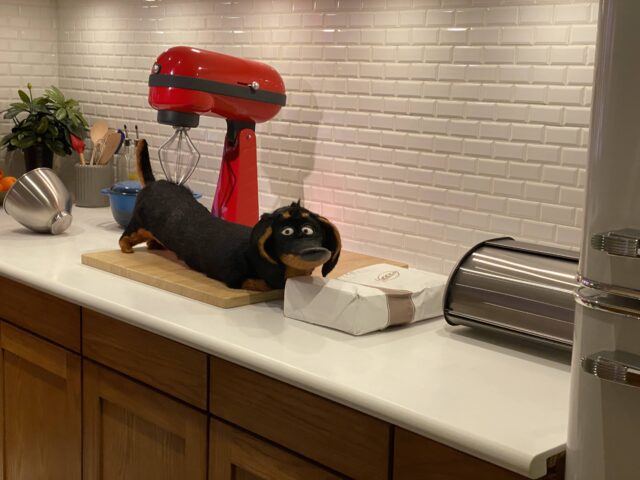 Hot Tip: Be sure to peek through the mailbox slots to see what the pets are up to while their families are out. 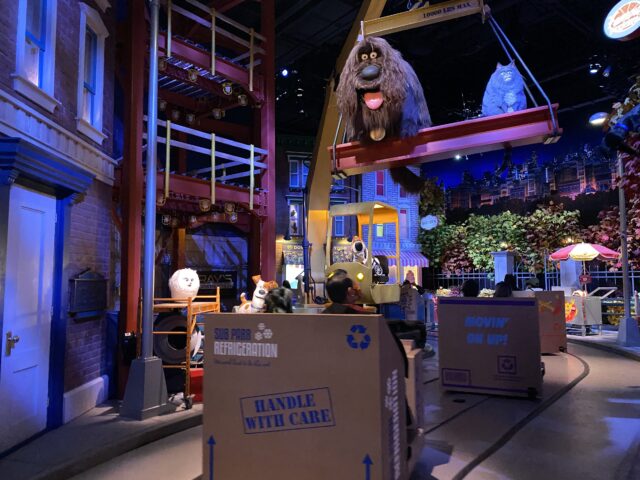 The traditional dark ride employs an Omnimover ride system that propels two-person cardboard box-shaped ride vehicles boarded in the apartment building’s mailroom (of course) through the streets of New York to make it to the “Pets Store” in time to be adopted. As the boxes move through the colorful cityscapes, we notice pets enjoying a day on the town – including one exceptionally limber pup who “upward dogs” right along with a neighborhood yoga class.

Get all the secrets you need to know before you ride The Secret Life of Pets: Life Unleashed! at Universal Studios Hollywood! 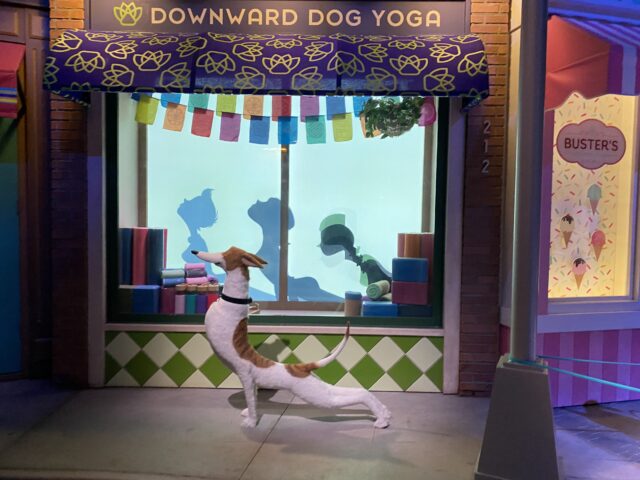 One NYC pup takes in a yoga class – © Samantha Davis-Friedman

We wanted it to be very immersive,” Corfino said. “It’s such a rich series of environments and 64 charming, engaging, and loveable characters. We also have some surprises in terms of media effects and physical effects.

Don’t Miss! Why Universal Orlando is Better for Families the Disney World

One particularly unique feature of The Secret Life of Pets: Off the Leash! is advanced optical gesture technology that allows riders to see themselves as animated puppies in the window of an electronics store, and while Universal Studios Hollywood is known for attractions that rely heavily on screens, this ride uses projection mapping, shadow projections, and digital media sparingly, so the technology never detracts from the physical sets and characters, including the unsavory feline gang in cat alley who attempts to hinder the puppies’ progress.

When we took a look at what we wanted to do and how we wanted to execute the immersion level, the best way was not through media, but by taking you through the actual places that you’d recognize from the films and immerse you in ways we couldn’t do with a traditional media-based experience, Corfino said. 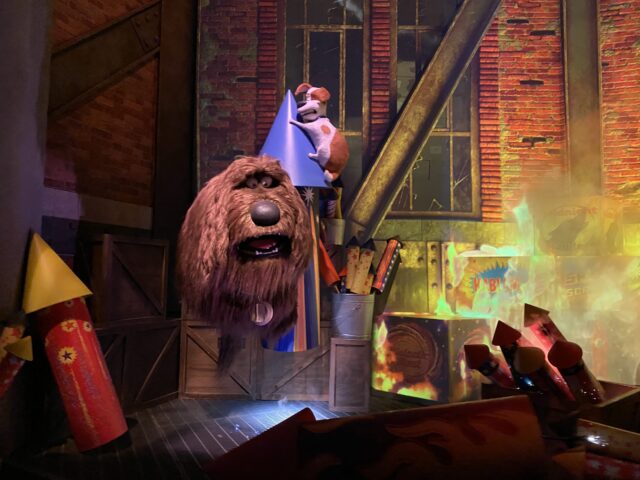 As with so many animated adventures, the journey hits a snag when Snowball (as the self-appointed mastermind) comes up with the arguably short-sighted idea to use fireworks to speed up the trip. Thankfully, despite Snowball’s plan “backfiring,” the stray puppies make it to the “Pets Store” in time for a visit to the pet spa before meeting their new families and celebrating at a rousing pet party that rivals the minion dance party at Gru’s house across the street. 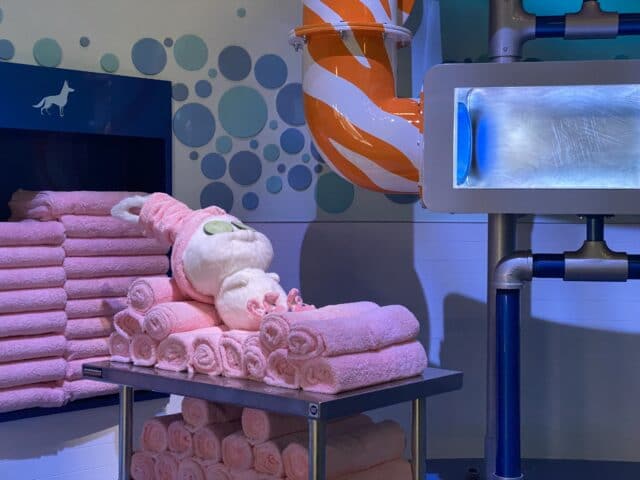 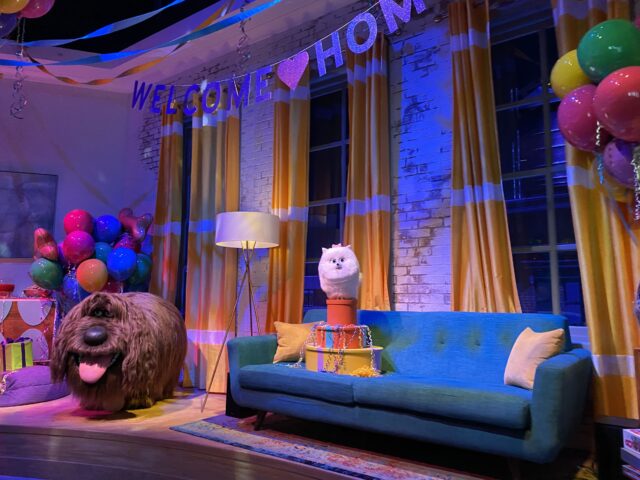 As always, riders exit through the gift shop, which in this case, is the “Pets Shop” from the ride that carries super cute “Pets”-related merch, including plush pets up for adoption.

Don’t Miss! Cutting the Line: A How To Guide for Your Fav Theme Park

But, wait. There’s more! “The Secret Life of Pets: Off the Leash!” uses a Virtual Line system – the same one Universal Orlando guests use to ride Race Through New York Starring Jimmy Fallon and Hagrid’s Magical Creatures Motorbike Adventure without standing in painfully long queues. That’s right, there’s no standby line. But have no fear, it’s very easy to access the Virtual Line and get a return time via the official (and free) Universal Studios Hollywood App or with help from a team member at the kiosk next to the ride entrance – one might even say it’s a walk in the (dog) park.

Good to Know: Even though the ride is family-friendly, there is a height restriction of 34″ and kids under 48″ need to ride with a parent or other taller supervising companion.

Prepurchase tickets to get the best deal and avoid lines when you arrive. You can buy them here.

Use this interactive map to find private homes and hotels around Universal Studios Hollywood. 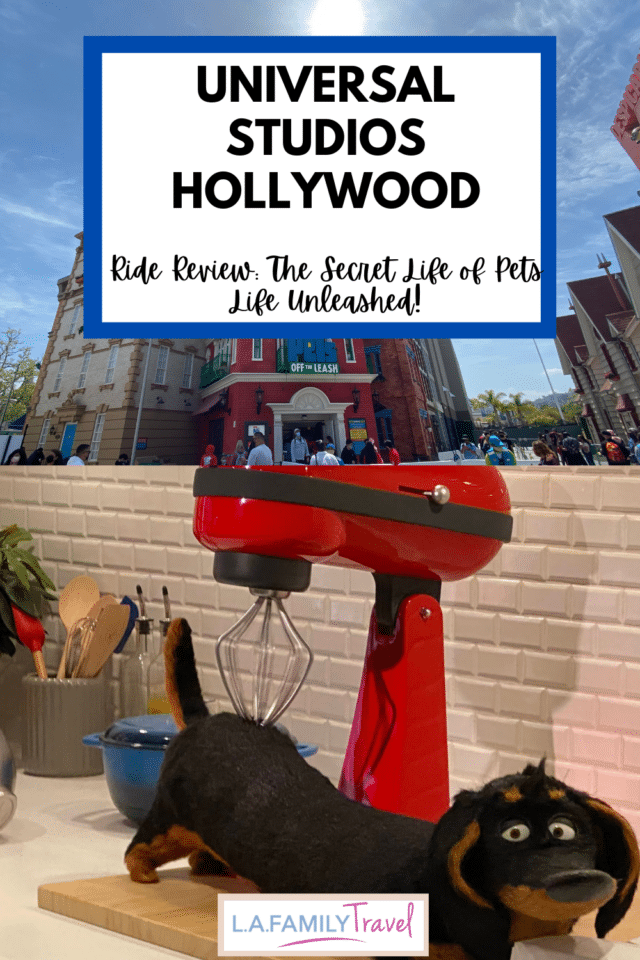